Hundreds of tests, thousands of simulations, temperatures from minus 35 to plus 90 degrees Celsius, monsoon rains and an ascent of Alpine peaks. Every new ŠKODA model undergoes tough testing. See how the new ŠKODA FABIA performed.

When the new ŠKODA FABIA is the flat terrain at the testing polygon, few people would be able to tell that the car is climbing Grossglockner peak in the Alps. That is the work of an ordinary-looking trailer called a “towing dyno”.

With a dynamometer inside it, the trailer can change the resistance felt by the car in line with settings entered by technicians. The trailer can generate a force of up to 9 kN and its dynamometer achieves a power output of up to 150 kW. Put simply, the trailer brakes its wheels, thus slowing down the car as well. “In this way we can simulate various driving conditions, including the profiles of real hills or driving with trailers of various weights,” explains Pavel Kolajta, who is in charge of functional testing of the new ŠKODA FABIA. 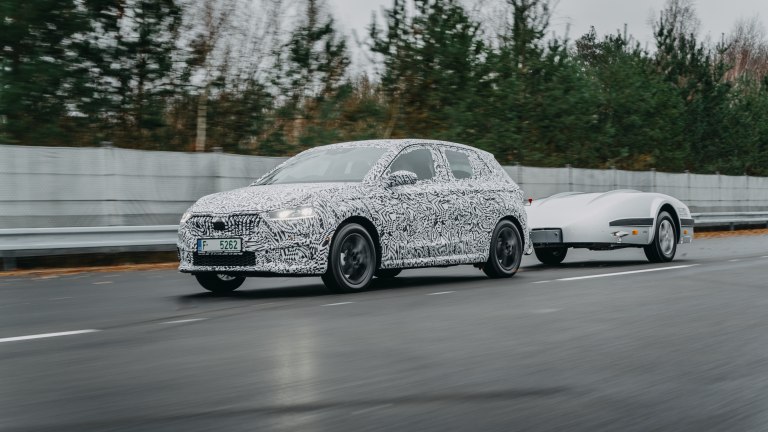 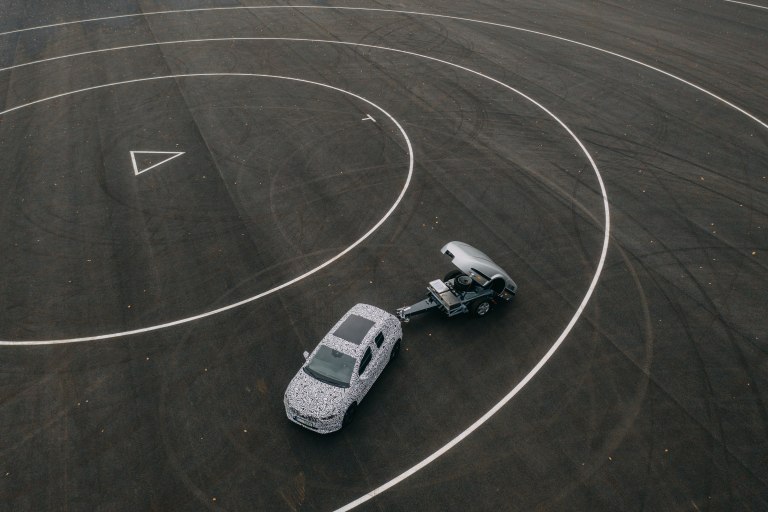 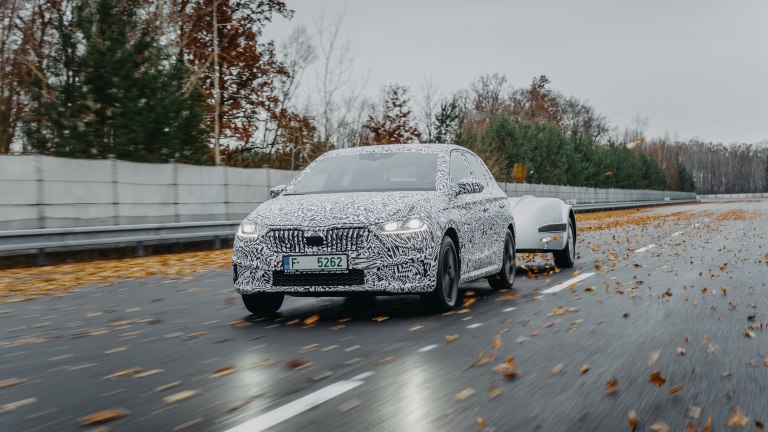 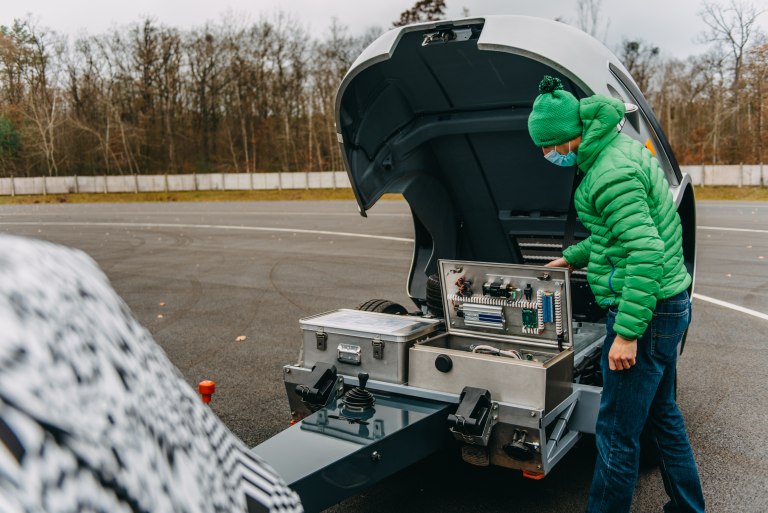 But the towing dyno is just one tool ŠKODA uses to make new car testing more effective. Today there are hundreds of tests, some physical and others virtual. “All these tests are an indispensable part of car development. We have to make sure that the cars satisfy all the requirements placed on them,” says Pavel Kolajta.

Testing cars under demanding weather conditions is an established part of the process. “With the car under the maximum load, it is tested in temperatures as low as -30 °C and over 45 °C, in snow, on ice, in dust, and even in simulated monsoon rains,” says Kolajta, listing some of the extremes. While these tests have remained largely the same for many years, there have been major shifts in the testing of assistance systems, safety and car’s electronic equipment, for example. That’s because these areas are getting increasingly complex, which places high demands on car development and testing. 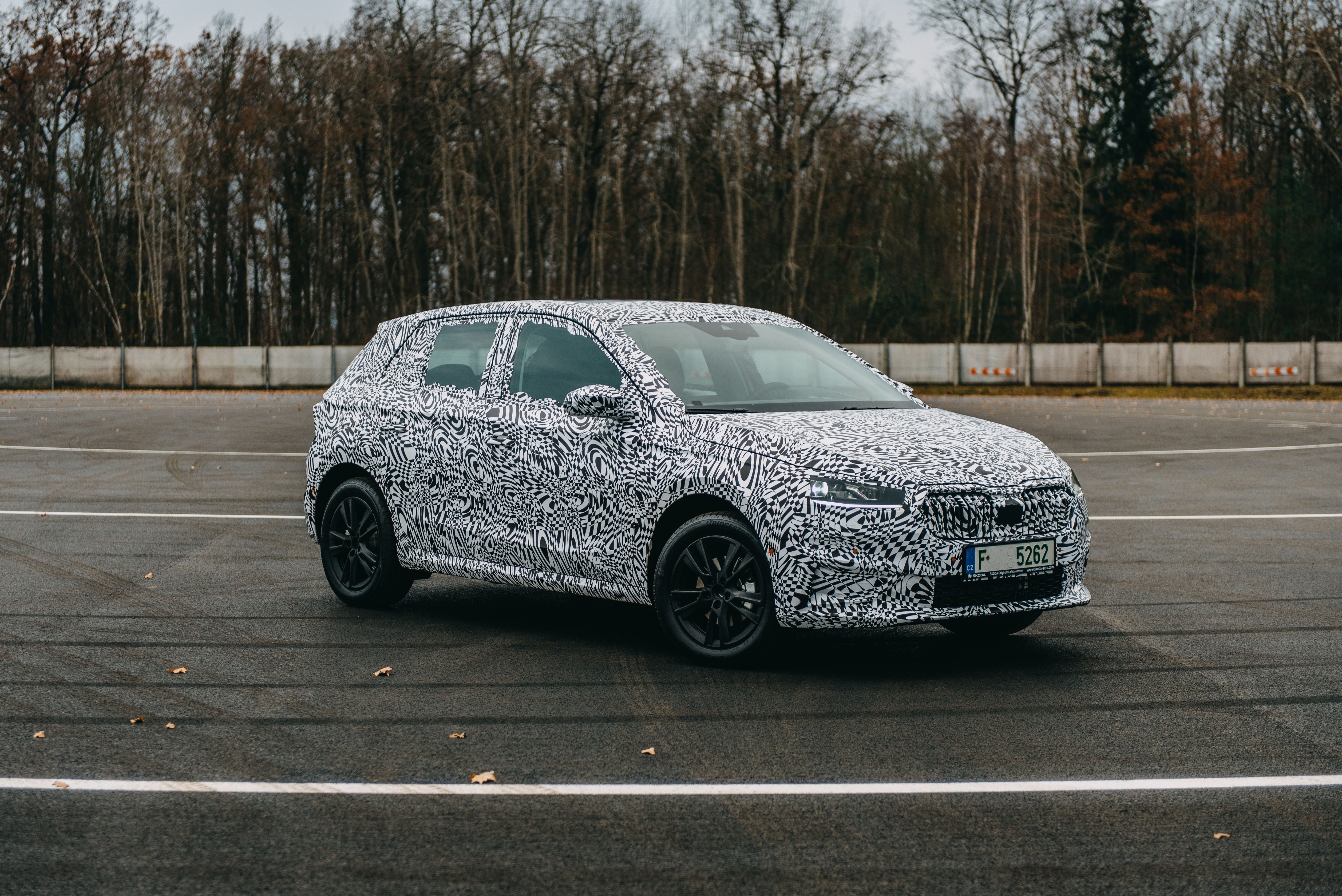 Stiff and soft at the same time

Stress testing is the icing on the cake of development: it is preceded by lots of other tests targeting specific parameters and components of the car. Car safety is one of the most stringently tested criteria, with the demands placed on cars increasing with every new generation. Here, too, real tests are combined with computer simulations.

“Our principal mission is to protect the lives of the car’s occupants and also other road users like pedestrians, cyclists and motorcyclists. Simulations show us the right way to achieve that as effectively as possible, and physical tests confirm that the chosen solution is correct and safe,” says Csaba Sirgely, one of the development engineers responsible for the FABIA model’s safety.

According to Sirgely, even the basic development of the safety structure of a car and its entire body is a challenge. “We are developing a car whose load-bearing part is supposed to be as strong and stiff as possible so that it protects the car occupants in tandem with the perfectly calibrated restraint systems. But at the same time, the car’s body must ensure that any collision with pedestrians results in the least possible harm to them,” he says, pointing out how complex and often seemingly contradictory the requirements are. 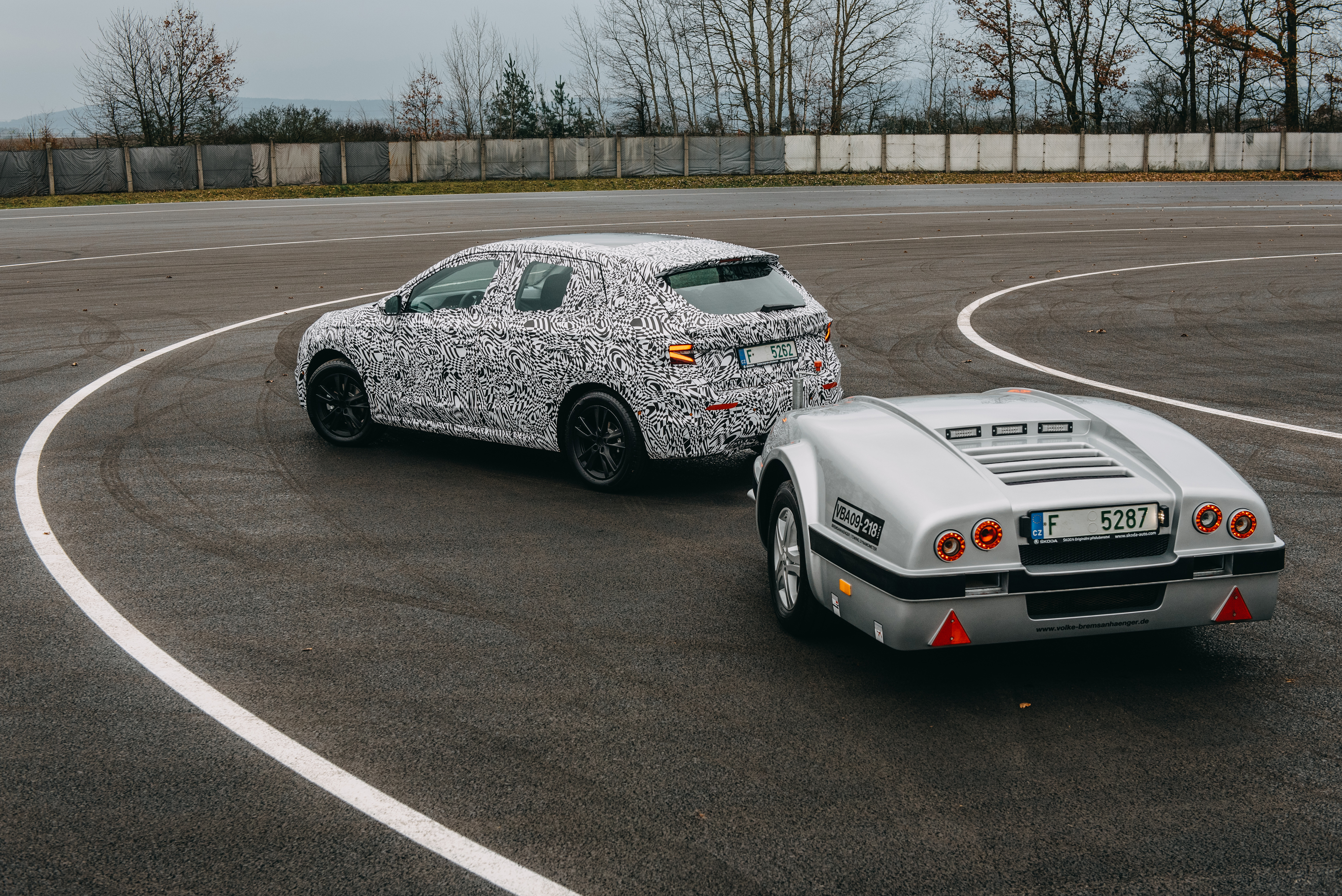 The “towing dyno” is just one of the tools used by ŠKODA to make new car testing more effective.

For this reason, the car and its various parts are subjected to a series of impact and crash tests. Right from the start, computer simulations are used to design the surface parts of the body, like the bumper cover and bonnet, for example, which are then tested using dummies or “impactors”. The goal is to ensure the car is pliant in a collision with a person. “When developing the FABIA we shot impactors at the car and its parts over 200 times. But for every test of that kind there are around 140 virtual simulations that help us get the parts right before the test proper,” Sirgely explains.

In classic crash tests this ratio is even bigger and continues to increase, he says. There are around a thousand simulations for each crash test. “Development and physical testing takes place from the prototype to the first series. Thanks to our modernised Crash Lab at Úhelnice we can put several dozen cars through tough crash tests at every phase of development. Various parts are also tested: special skids test the durability and strength of restraint systems; the optimal working of airbags is tested for all the different types of crash test dummy; and various types of collision are tested. “During static tests we activate the passenger’s airbag around 300 times, for example. Every airbag in the car is tested roughly the same number of times, which results in a huge number of tests that are done at temperatures ranging from -35 °C to 90 °C,” Sirgely explains. 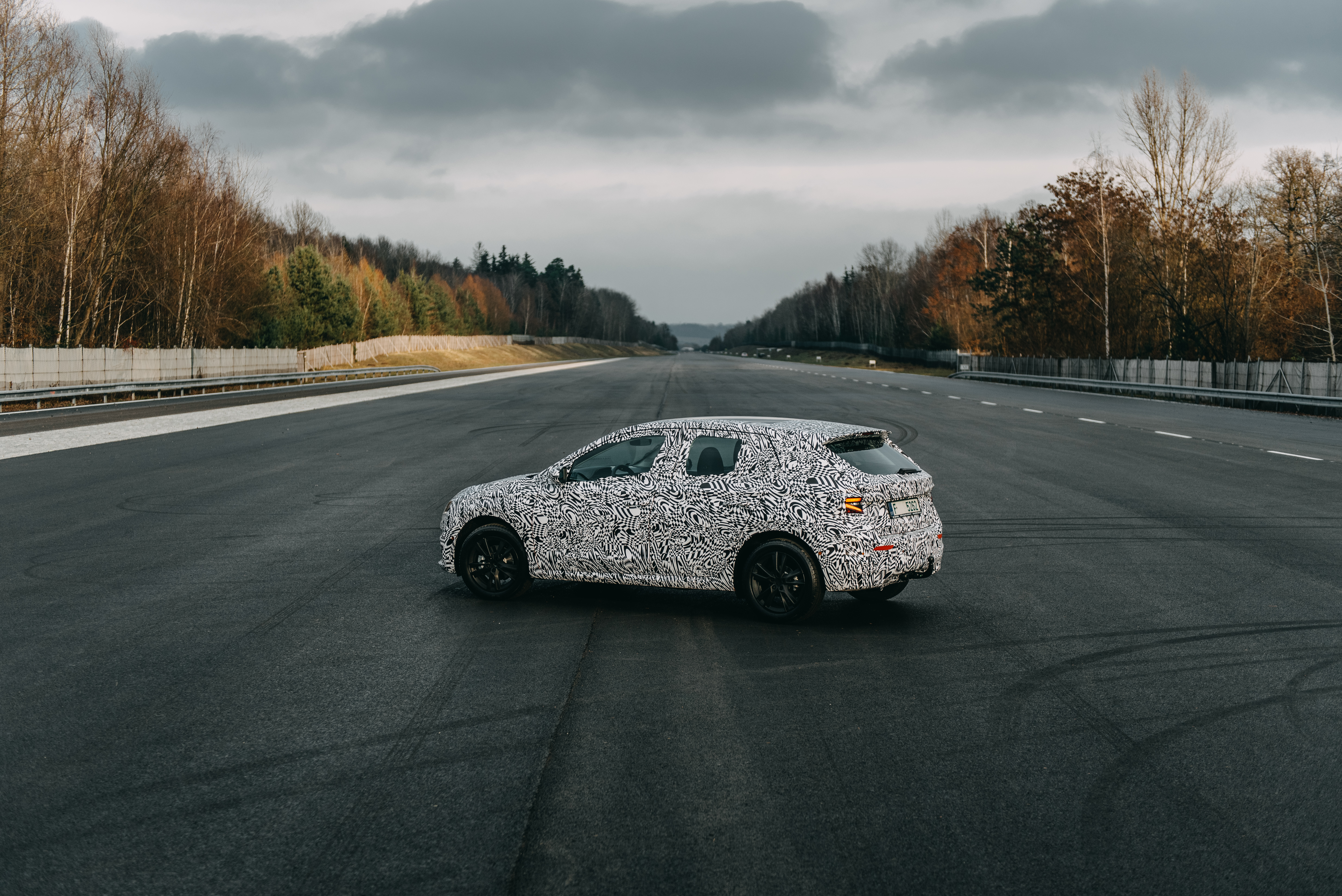 Thanks to all this testing, the new ŠKODA FABIA is one of the safest cars in its segment. Besides satisfying all the legal requirements, it also meets the strict criteria defined by the independent consumer organisation EuroNCAP. In addition to the constantly increasing demands placed on passive security, EuroNCAP places growing emphasis on various safety assistance systems. “Every year, for example, the tests include new scenarios for active safety, which places greater demands on the functionality of radars and cameras, and these are things we have to adapt to,” says Sirgely, adding that the automatic emergency brake function and Front Assist in the latest-generation FABIA are among the best in the segment.

Like safety, aerodynamics is an area that has experienced a leap forward in recent years. In terms of aerodynamics, the new ŠKODA FABIA is the best car in its segment thanks to lots of hard work during development and testing. “Getting the aerodynamics right for each type of car is a specific process. Different body types and shapes, dimensions, the platform and the wheelbase all affect the airflow around the car in different ways. There’s no guarantee that what works on one car will work on another,” says Vít Hubáček, who is responsible for aerodynamics development. He says that getting the aerodynamics of a hatchback right is a bigger challenge than longer cars. Put simply, there is less surface area for optimising the airflow.

Excellent aerodynamics help cut fuel consumption and thus also CO2 emissions. “Even though the new FABIA is bigger than its predecessor and its front area has increased by about 3 %, we managed to reduce its drag by almost 10 %. In the standardised WLTP cycle that means a reduction in CO2 emissions of almost 3g per kilometre,” explains Hubáček.

Painstaking optimisation of the car body is just one of a whole series of new technical solutions: one example is “cooling shutters”, which ŠKODA is applying in the AO segment first. These are lamellas that prevent air from entering the engine bay, which improves airflow around the car. And “air curtains” are used extensively on the chassis: these are vents in the front bumper that improve airflow around the front wheels. One speciality of the FABIA will be light-alloy wheels with special aerodynamic details that stabilise airflow around the wheels. 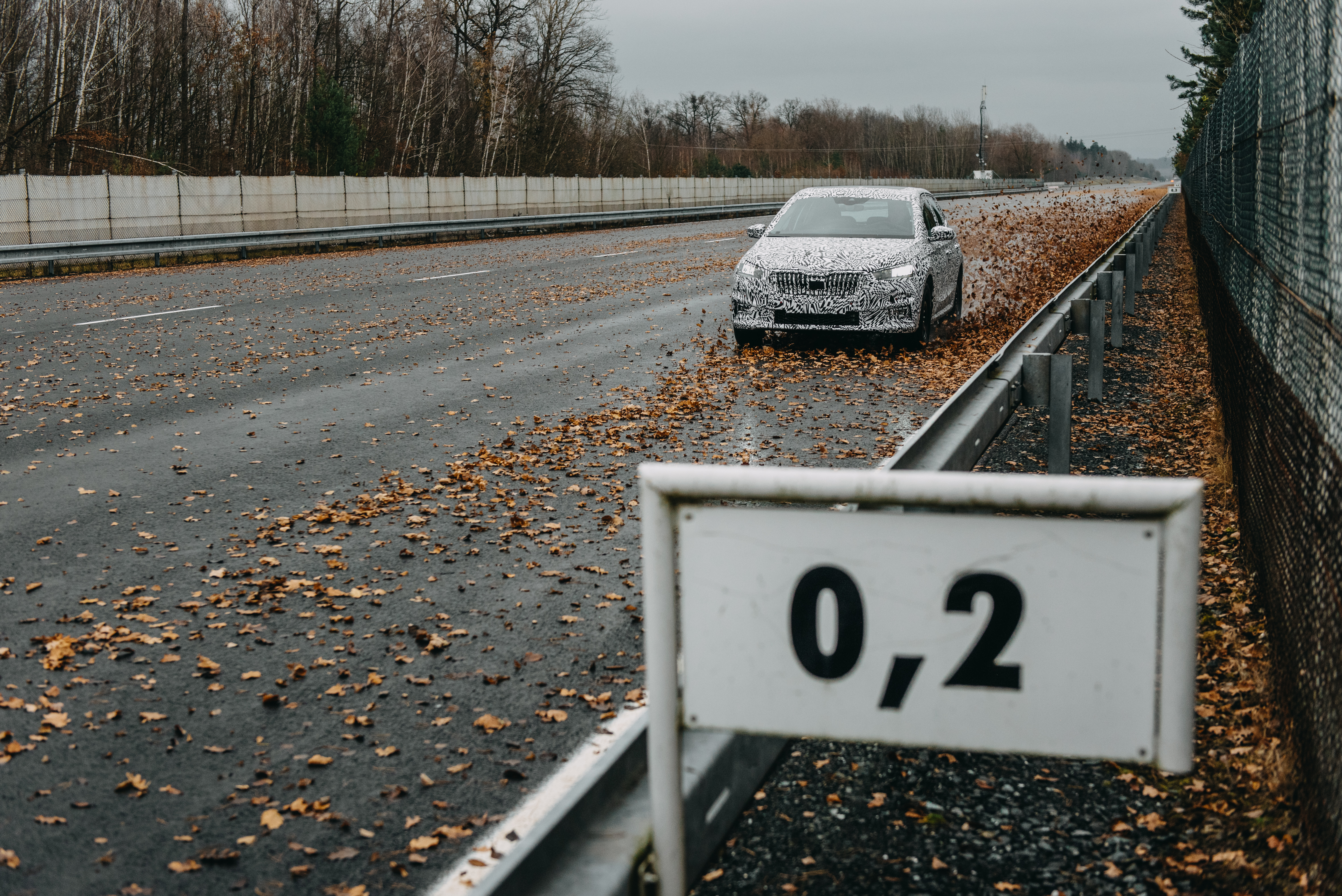 Aerodynamics is also tested using both simulations and a wind tunnel. The fourth-generation ŠKODA FABIA spent just over a hundred hours in the wind tunnel. Although the engineers measure tens and even hundreds of alternatives in the wind tunnel, most alternatives are tested in a virtual environment. The new FABIA underwent over 3,000 computer simulations that took up tens of thousands of hours of computing time. “Physical measuring took place on around 20 % of the tested alternatives, with the remaining 80 % measured in the virtual environment,” says Hubáček. “Physical testing shows us how much the aerodynamic properties changed, but simulations also tell us why they changed,” he adds. 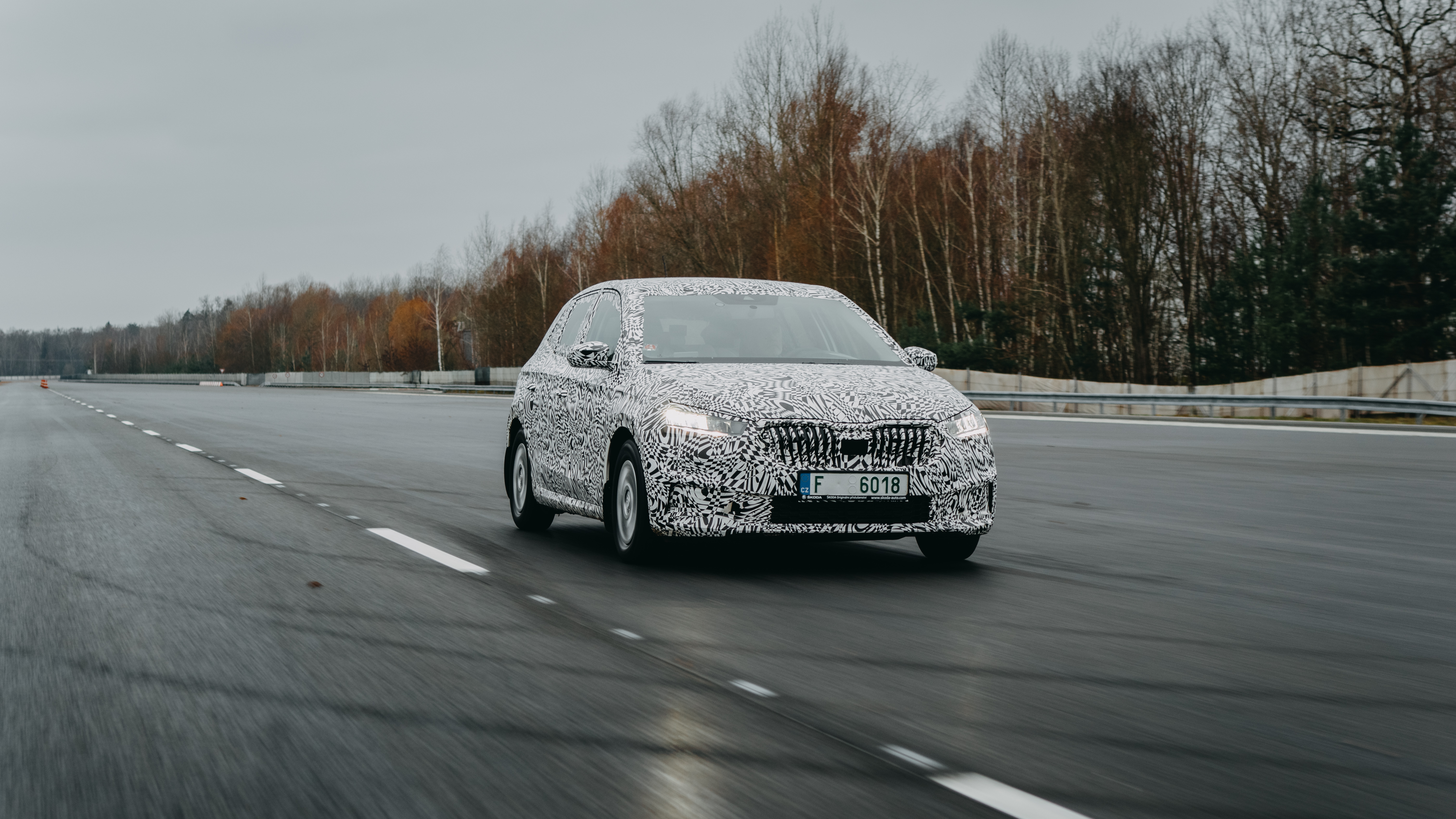 With the car under maximum load it is driven in temperatures ranging from -30 °C to 45 °C.

“Even a small geometric change on the front part of the car can cause a significant change in airflow at the rear of the car, and vice versa,” says Hubáček, giving us an insight into the enigmatic behaviour of aerodynamics. That is why various parts of the car are optimised in conjunction with one another: exterior mirrors thus “interact” with the outline of the rear lights, the angle of the roof with the diffusor design, the air curtain with the wheels and so on.

Connectivity is an increasingly important part of cars these days, so that also requires thorough testing. Here, too, the ŠKODA FABIA will offer state-of-the-art solutions that compare to features found in premium models. One incorporated feature is the One Digital Platform cloud solution. “This meets the demands and requirements of present-day customers: it can react to large volumes of input at various times. The upshot is a faster and more stable system,” explains Stanislav Sloup from the Connected Car department.

When developing the new MyŠKODA application that lets users control the car’s functions and monitor its status remotely, the Czech carmaker’s engineers made use of a process known as Agile. “Development takes places in loops known as “sprints”. In every sprint, the planned functions, or parts of these functions, are determined and implemented and then also tested. That cuts the amount of time required to develop a mobile application, so we can respond to the never-ending tide of new driver demands more quickly and efficiently,” says Stanislav Sloup.

MONSOON AND CRASH TESTS ARE NO MATCH FOR THE NEW FABIA 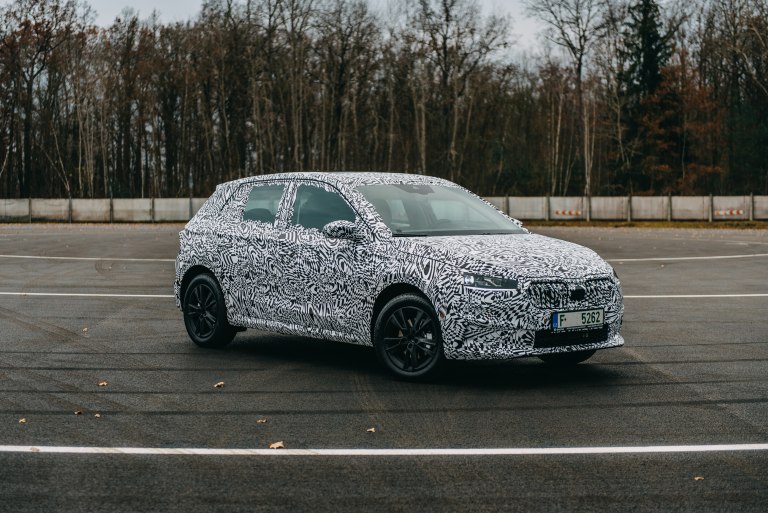 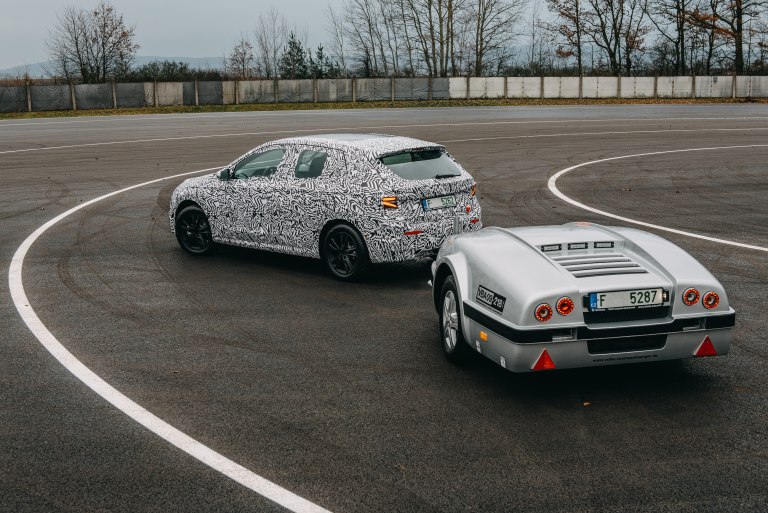 The “towing dyno” is just one of the tools used for new car testing. 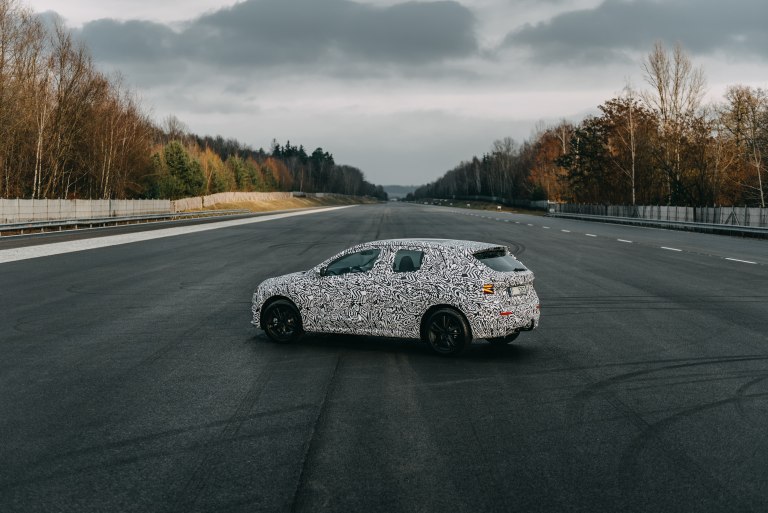 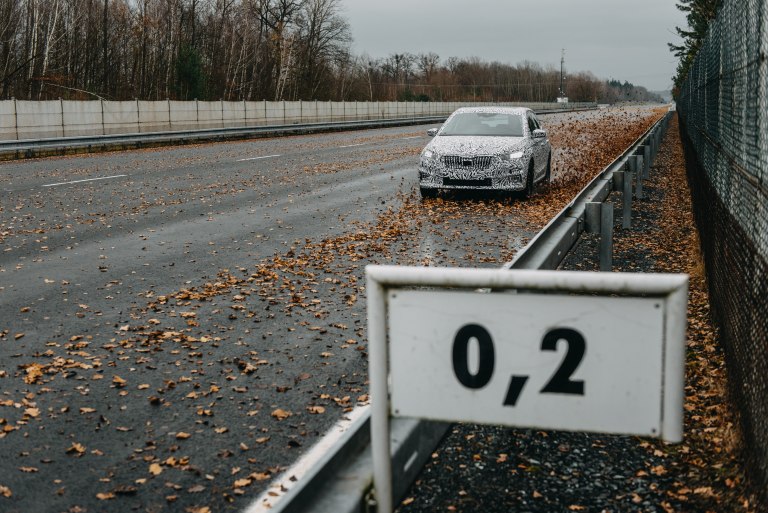 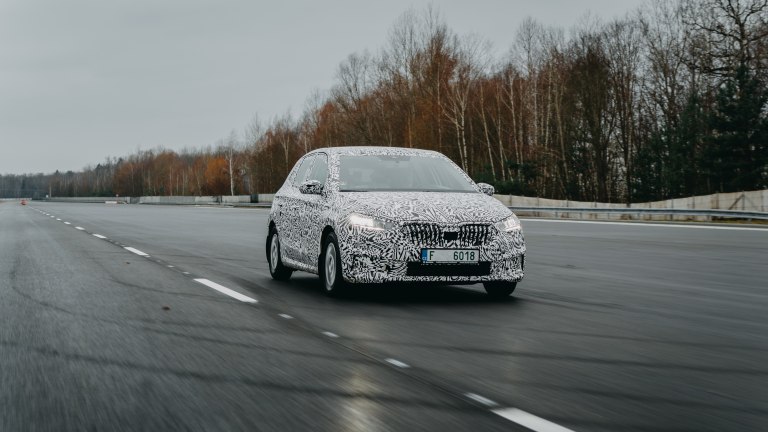 Behind the curtain: how a world premiere is prepared