Every new car model has to undergo stringent safety testing. What do these tests look like and how do ŠKODA cars manage to be best in class in the Euro NCAP ratings?

In Euro NCAP tests all 14 ŠKODA models tested since 2008 received the highest five-star rating. Most recently, the fourth-generation ŠKODA FABIA and the ŠKODA ENYAQ iV electric SUV. The heaviest car ŠKODA has ever developed in its modern history, it has made the ambition to make a fully electric car as safe as conventional cars a reality. 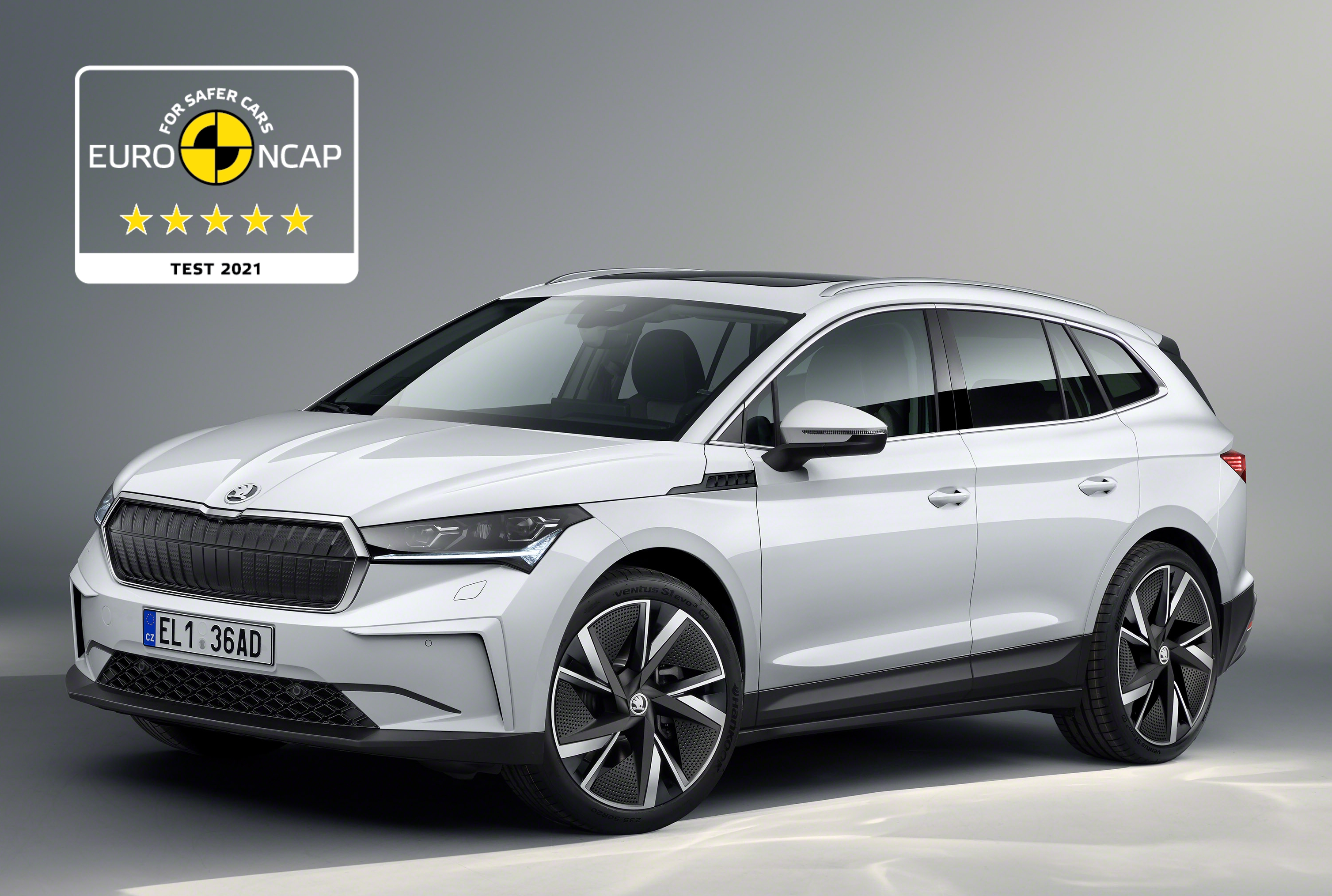 In addition, both the ENYAQ iV and the new FABIA have been awarded the prestigious annual “Best in Class 2021” award by Euro NCAP. This means that both models are the safest in their respective classes of all vehicles tested last year. No other carmaker achieved two top spots.

Carmakers’ development testing is much more extensive and rigorous than Euro NCAP tests. That’s because the development process has to take into account the regulations applied in Australia, China and India, say, as well as the European standards. Consumer organisations have additional requirements, and Australia, New Zealand, China and Latin America have their own equivalent organisations to Euro NCAP. Last but not least, there are Volkswagen Group’s own internal requirements, which are derived from findings from road accident analysis, for example, including data provided by the ŠKODA road safety team.

When most people imagine safety testing they think of crash tests, but these come later in the development of a car’s safety. Increasingly, computer simulations are being used during the testing process that is supposed to result in five Euro NCAP stars. It’s fair to say that simulations set the right course for the car’s development, which the crash tests confirm or optimise.

Safety is kept in mind from the very beginning of the car’s development. The very first clay models are scanned and converted into a number of points, curves and surfaces in the computer, which are then used to create the first concept car designs. This is followed by simulations to stress-test the various elements of the structure.

After the exterior and interior design receive final approval, the entire car is constructed in the computer down to the smallest detail. The simulation models are then used to virtually examine all the stress conditions and optimise the car’s relevant properties such as rigidity, strength and crash behaviour, but also criteria such as longevity and acoustics.

that from 2025 the Euro NCAP rating will include a warning system for drivers to warn them that they have left a child or dog in the car? It’s expected that the car will first attract the driver’s attention by flashing its lights and sounding the horn, followed by a second step where it will call a paired phone and send an image from the in-car camera to it. The third step will be to call 112.

The load-bearing part of cars is developed so that it gives their occupants the best possible protection in conjunction with the restraint systems. The body must be able to absorb impact energy effectively in certain areas – which means they must deform in a controlled manner – while still being strong enough to protect the interior. In addition, some exterior parts have to meet the criteria of not posing a danger to vulnerable road users, such as pedestrians. 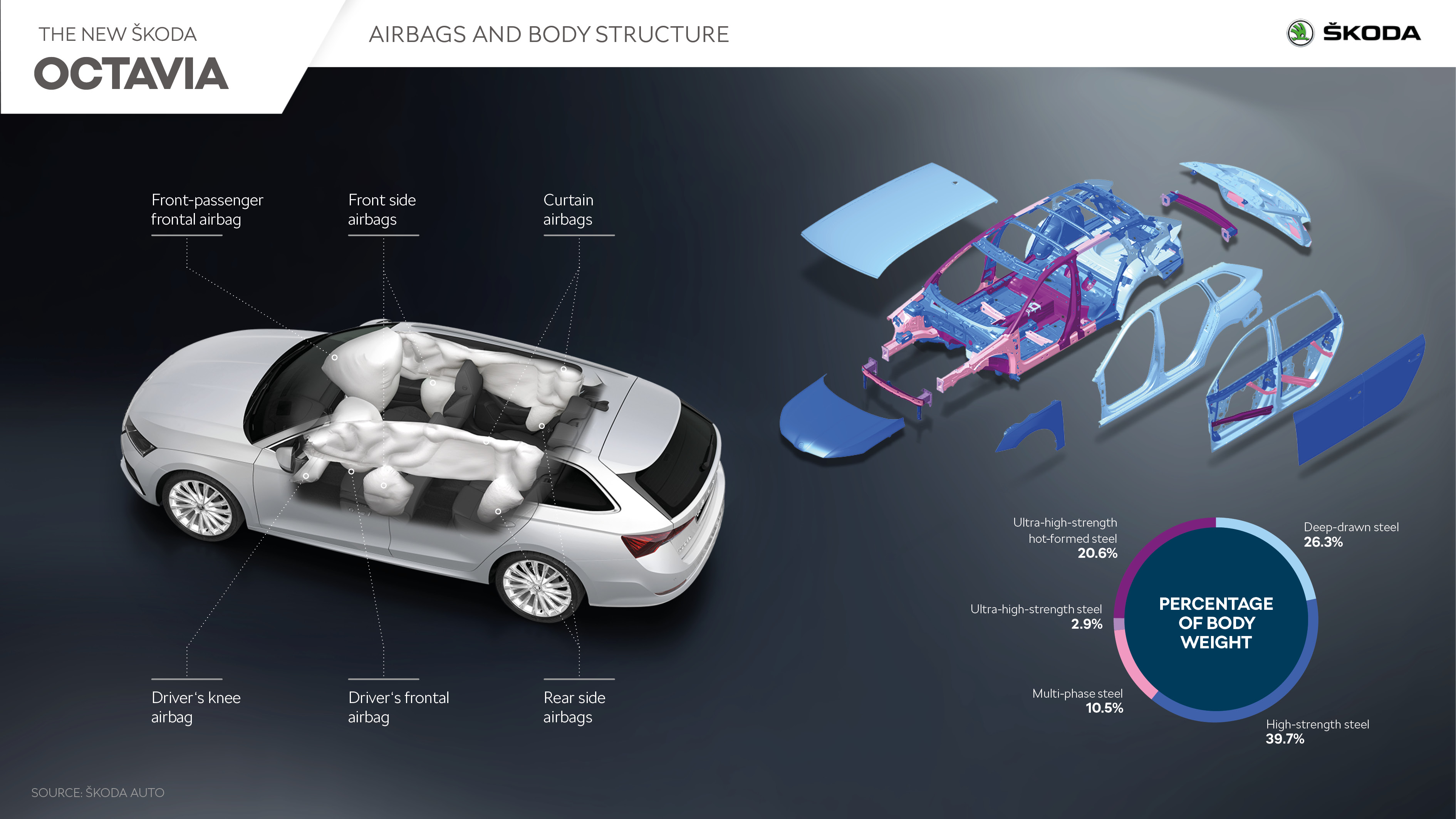 Both whole cars and certain parts of them are subjected to crash testing – for example, the bonnet or bumper cover at the front of the car. In the case of pedestrian protection tests, these are tested with “impactors” that mimic parts of a pedestrian’s body. The aim is to create a pliant structure that will cause as little injury as possible to the pedestrian in the event of a collision. During the development of the latest-generation ŠKODA FABIA, the engineers fired these impactors at the car and its parts more than 200 times. Each individual test is preceded by around 140 virtual simulations to optimise the part.

The number of virtual tests is even higher in the case of the classic crash tests, where there are around 1,000 computer simulations per physical test. “This number continues to increase with each new generation of models. Even so, we crash test several dozen cars at each stage of development. Special sleds are used to test the strength and durability of the restraint systems, to test whether the airbags work optimally for all types of dummies and the different types of impact. Each of the airbags is activated approximately three hundred times during static testing," says Dušan Podzimek, project manager for midsize/MEB safety at ŠKODA Technical Development.

that the European New Car Assessment Programme (Euro NCAP) a consortium of transport ministries, automobile associations, insurance associations and research institutes from eight European countries, founded in 1997? The consortium is based in the Belgian city of Leuven. It carries out safety tests on current models and assesses their active and passive safety, as well as rescue and extrication. The tests have gradually become more stringent over the years and now cover several collision scenarios. Whereas previously only crash test results were evaluated, today the assessment of active safety and assistance systems is increasingly being factored into the results. The official Euro NCAP tests are always carried out in one of the accredited laboratories in Germany, the Netherlands, France, Spain, UK, Italy, Sweden and Austria. One of these centres is always chosen at random.

The first group includes aspects like seatbelt reminders or driver fatigue detection. This is an area where another leap forwards in safety is expected soon: cars will be equipped with interior cameras that can assess whether a person is fully focused on driving or whether a child is locked in the car. In the future, we can expect to see systems that communicate with traffic information or map data in real time.

Safety ratings are also influenced by various assistance systems - both the FABIA and ENYAQ iV have a Fatigue Recognition Assistant. Check out the video:

"The second group includes assistance systems that actively try to prevent collisions – for example, automatic braking in front of a car, pedestrian or cyclist, lane assist systems etc. In the near future, cars will get more radar systems, like radars that can see around the corner into an intersection, so to speak. This will gradually bring us closer to autonomous cars," says Podzimek.

Another modern assistant helps keep the car in lane.

When a collision can’t be prevented, cars try to minimise injuries to road users. That's what passive safety involves: exterior crumple zones surrounding a rigid cabin that provides sufficient space for survival, and restraint systems such as seatbelts with force limiters and tensioners, airbags, child seats or head restraints.

Post-collision features include interaction with the emergency services after an accident. These days, every newly manufactured car already has an SOS button and a system that can call 112 and send dispatchers the car’s location, the speed at impact and the number of occupants wearing seatbelts. In the future, other information such as the driver’s pulse, images from the in-car camera or battery charge status for electric cars will also be sent.

that there are no major differences between the test protocols for electric and internal combustion engine cars? But there are specific differences in how developers approach safety. “For internal combustion cars, including CNG, we try to protect the entire fuel circuit, from the tank to the engine. After a crash, we do a pressure test and what we call a rollover, i.e. turning the car on its roof, to make sure there is no fuel leakage and no risk of ignition. For electric cars, we protect the battery and the entire 400-volt circuit to prevent it from being damaged. After an impact, we monitor the temperature of the battery for 24 hours to make sure there are no chemical reactions and no risk of fire,” says Dušan Podzimek.

How do you earn five stars? Extensive technologies help

The minimum mandatory safety equipment for the Euro NCAP tests is determined by the homologation regulations, of course. But that only gets you so far. ŠKODA cars also achieve the best five-star rating thanks to the latest safety technologies: in addition to front and front side airbags, these include curtain head airbags for both the front and rear seat rows, or the new central airbag, which deploys in the middle between the driver’s and passenger’s heads. Dual seatbelt tensioners, which are more effective than a knee airbag, are also a new safety feature in the cars. 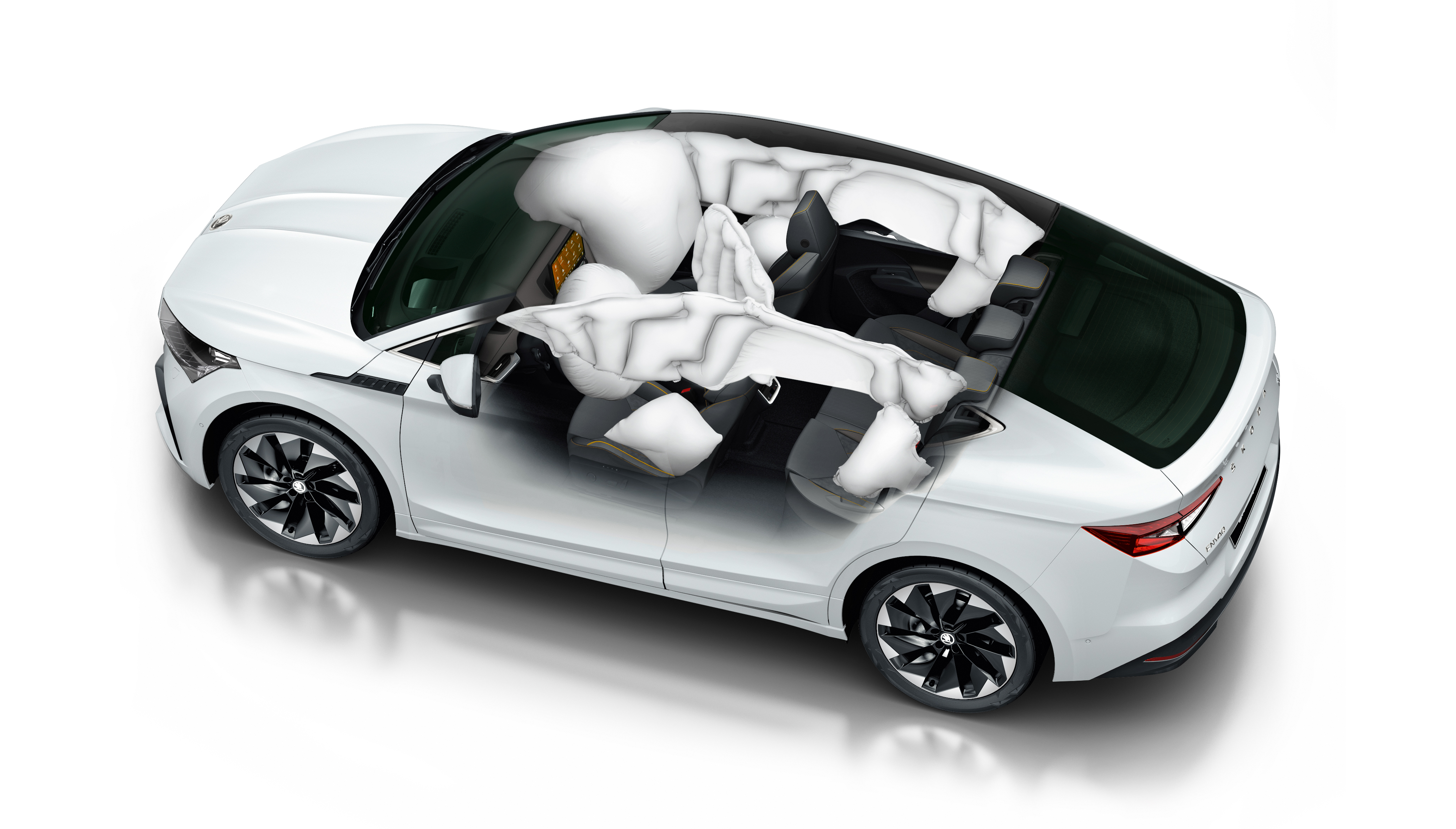 ŠKODA ENYAQ COUPÉ iV and its complete set of airbags, including the centre airbag

“In the near future, increasingly advanced safety systems will be required that adapt their restraint function to different body sizes or weights and even the age of the person. With Car2Car communication, cars will send warnings to each other: the car in front has lost control, watch out for a lorry or motorbike out of its lane in the opposite direction, and so on. And the car itself will react to the situation. With the advent of autonomous cars that will offer relaxed seating positions or the ability to rotate the seats, restraint systems will become a part of the seats," says Podzimek, giving us a glimpse of the future.

that your car has a safety component called a leg catcher beam? You will find it behind the front bumper and most people would probably call it a spoiler, or something like that. But this part is on the front of the car for a completely different reason. Hidden in there is most often a plastic (but sometimes sheet metal) part whose job is “sweep up” a pedestrian’s legs in the event of a collision. The aim is to ensure that the person’s body is thrown as quickly as possible onto the bonnet, which will stop the person from falling under the wheels and will reduce the likelihood of serious leg fractures. It is important that the “leg catcher” is not too hard and does not hurt the person’s legs, but is simultaneously resilient and firm. 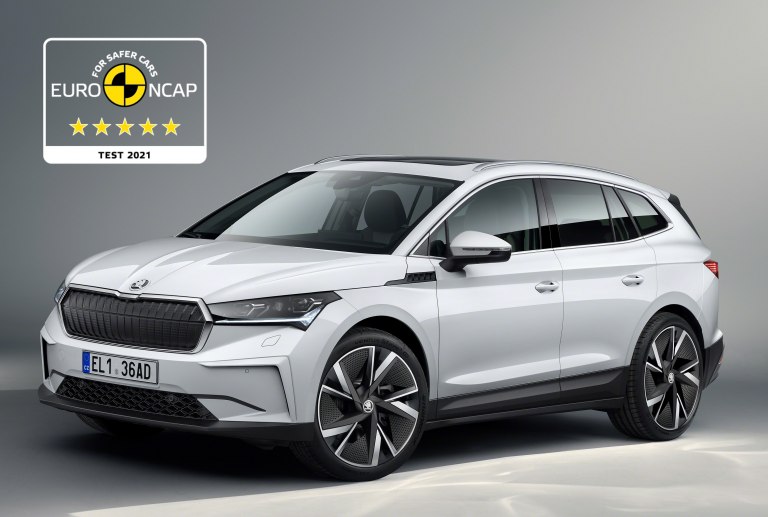 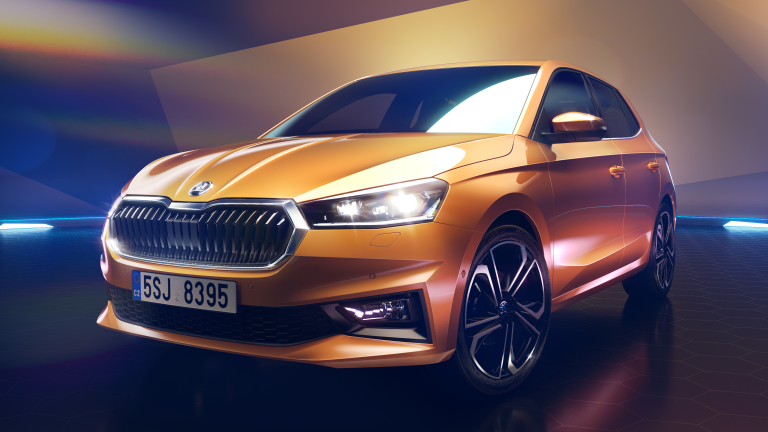 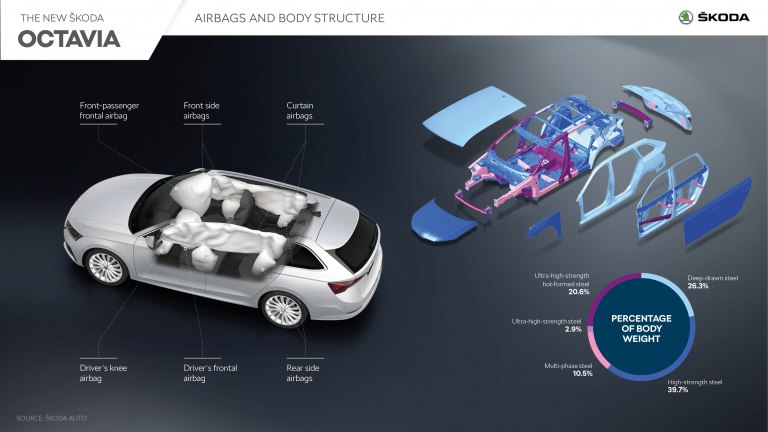 Computer simulation of a frontal impact 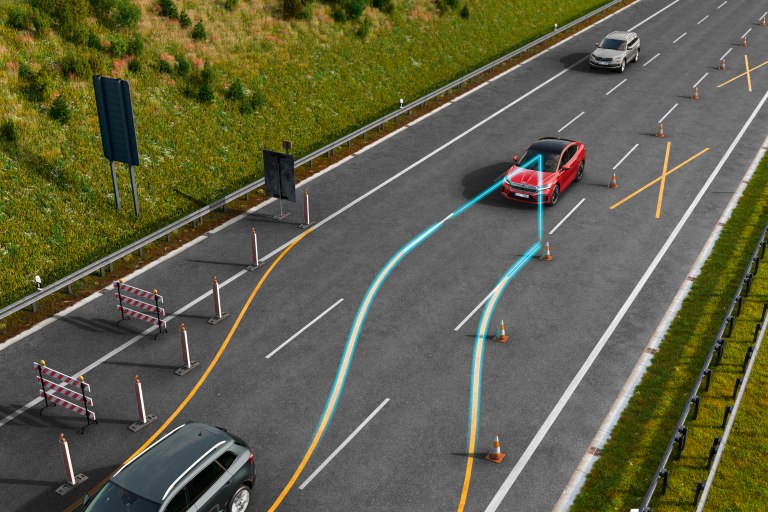 Another modern assistant helps keep the car in lane. 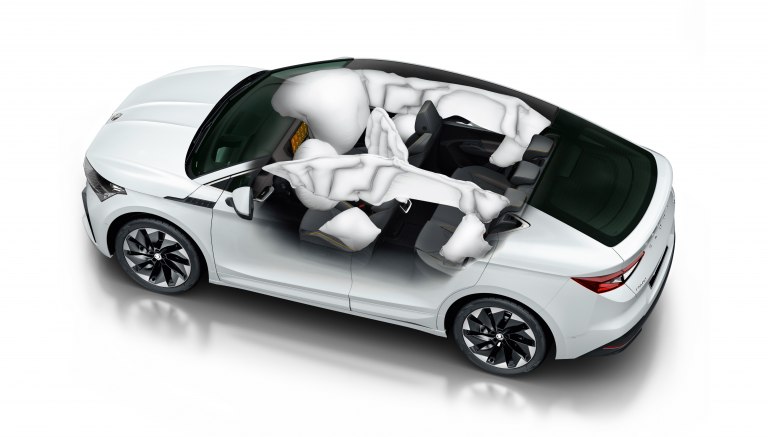 ŠKODA ENYAQ COUPÉ iV and its complete set of airbags, including the centre airbag