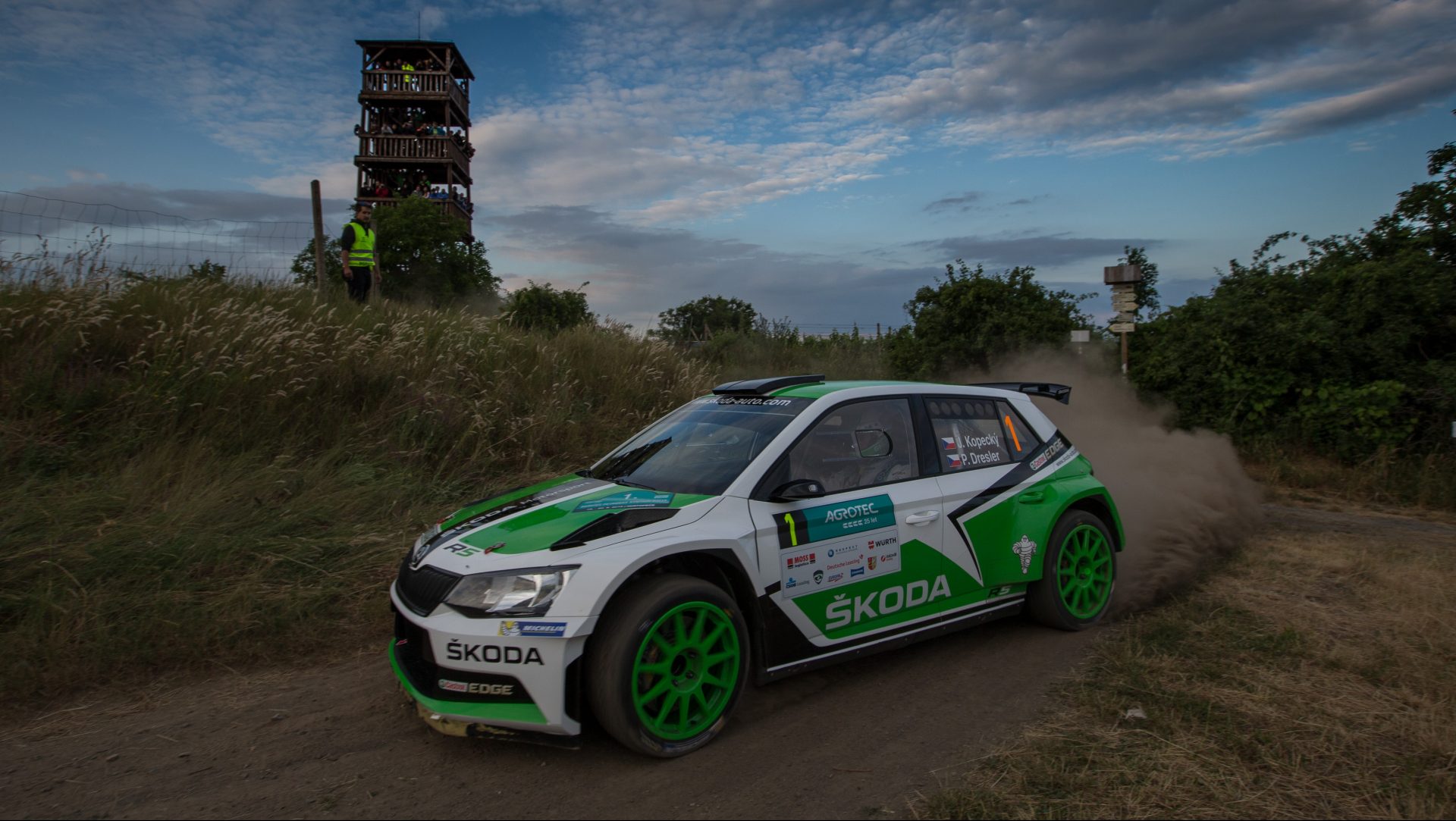 Hustopeče, 20 June 2015 – After a spectacular pursuit in the new ŠKODA Fabia R5, works driver Jan Kopecký (CZ) celebrated his third win in the third event of the Czech Rally Championship (MČR). The old hand made up the large deficit to his arch-rival Václav Pech (CZ) at the Rally Hustopeče and won seven special stages in a row. This sees Kopecký and his co-driver Pavel Dresler (CZ) well on their way to winning the title at the halfway stage of the national championship.

“Jan delivered a fantastic battle and proved the potential of our new Fabia R5. Naturally we are delighted with the reliability and the perfect results of our new rally car in the first half of the season of the Czech Rally Championship. But we still have a lot of work to do,” said ŠKODA Motorsport Director Michal Hrabánek.

Jan Kopecký finished in third at the Rally Italy on demanding gravel tracks last weekend, but quickly got used to the asphalt tracks in his home country. However, the 33-year-old lost a lot of time on the second stage of the Rally Hustopeče when he suffered tyre damage and at one point trailed his fiercest rival Pech by 49 seconds.

Just like at the Rally Český Krumlov, in which the ŠKODA works driver overtook Pech on the final special stage, Kopecký proved to be a great fighter. He won all of the special stages in the wine-growing region of Southern Moravia with a big lead on Saturday. This saw him take the lead in the overall standings at midday and then get his commanding fourth win at the Rally Hustopeče.

After 150.02 kilometres of special stages and wins on seven of the ten stages, Kopecký finished with a lead of 45.1 seconds over Pech and remains unbeaten at home in the ŠKODA Fabia R5. “The first day didn’t go according to plan. But we chose the perfect tyres on Saturday. This allowed us to show just how fast our new ŠKODA Fabia R5 is, even in the most difficult of conditions,” said Kopecký.

As well as three season wins in the MČR, the ŠKODA Fabia R5 also has three podium finishes in the FIA World Rally Championship (WRC 2) to its name. The next challenge in store for Kopecký is the Rally Bohemia from 10 to 12 July. ŠKODA’s home race just outside the headquarters in Mladá Boleslav is the highlight of the season of the Czech Rally Championship.

The number of the Rally Hustopeče: 4

The Rally Hustopeče is good ground for Jan Kopecký and Pavel Dresler. After a hat-trick of wins from 2011 to 2013, they won the event on Saturday for the fourth time. This makes the ŠKODA duo record winners of the rally, which was held for the eleventh time this year.