SLAVIA. That is the name given to the handsome sports cabriolet evoking 125 years of ŠKODA history. The car is the work of students at the ŠKODA Academy. Let’s take a closer look.

There are 20 of them, and most of them are in the third year at the ŠKODA Academy. When this article was written, their car, the seventh in the Azubi Car project, was already at an advanced stage of production: work was taking place on the interior and accessories; the seductive shapes of the body were being produced in the workshop; exhausts were being tested and the students were working with experts on perfecting the seat design, for example.

As the Azubi Car project’s renown grows every year at the academy, interest in joining the development team is increasing as well. “I wanted to take part last year, but all the places were already taken. I’m really interested in this project and I’m glad I can have a go this year. In a couple of years I’d like to be able to say: I played a part in making this gorgeous car,” says Kateřina Zamlová, a logistics student whose role is to organise the team’s work. 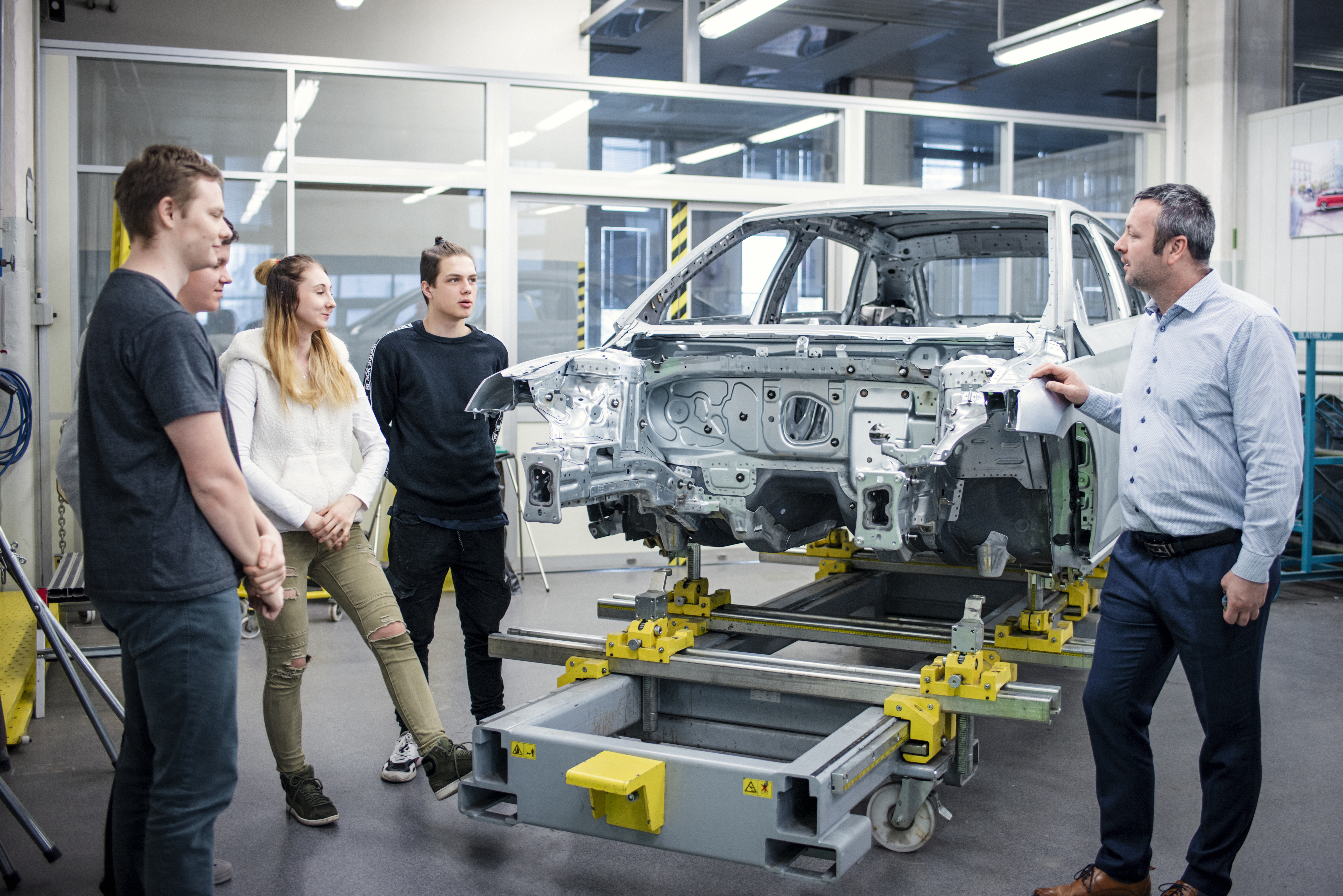 This year’s study is based on the mass-produced ŠKODA SCALA model, which the students are transforming into a sporty spider. The students had also considered altering the SUPERB model, but in the end they opted for a compact car. “The SCALA took precedence partly because it’s a new model, and I think its size makes it ideal for a spider,” Zamlová says. 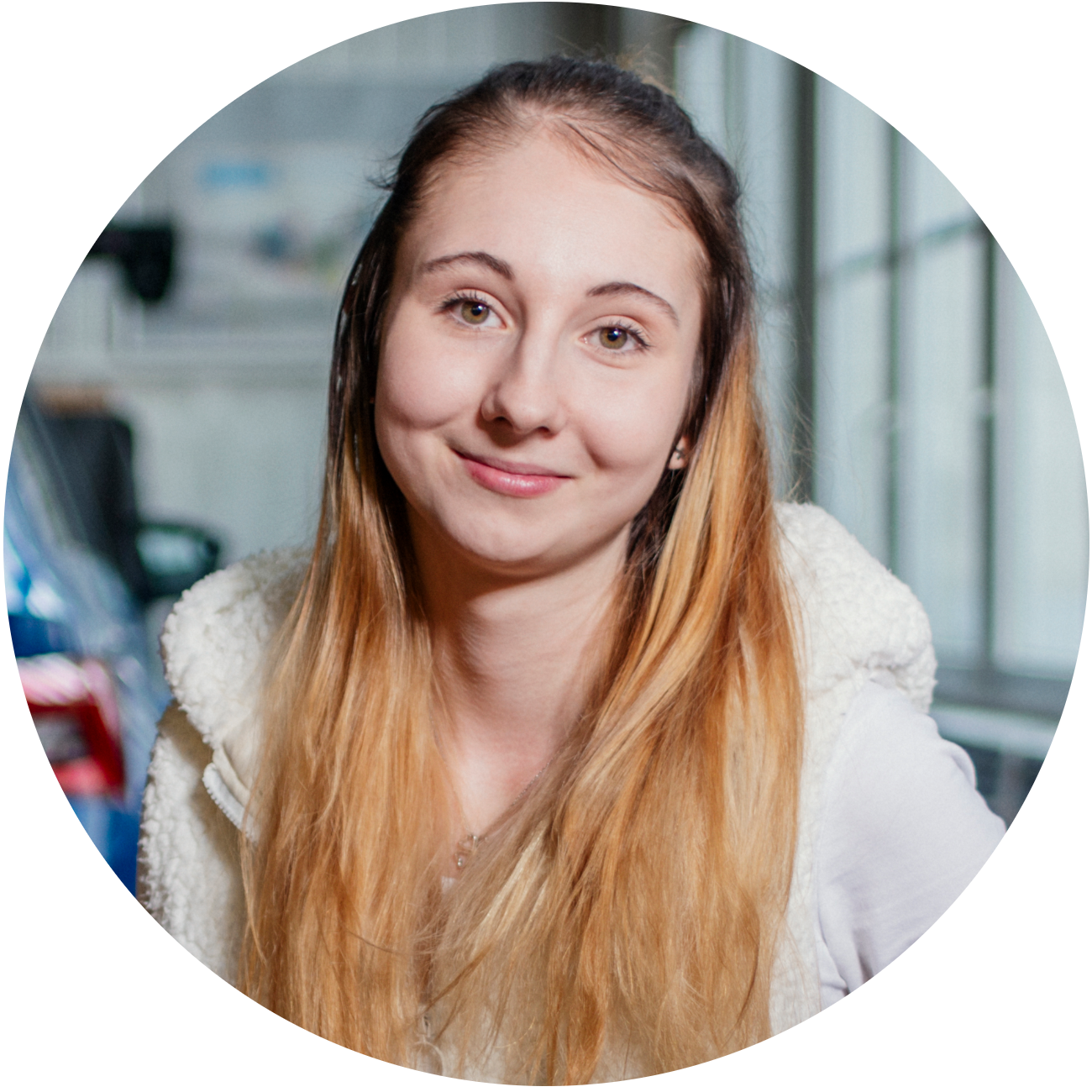 Her colleague Ludvík Arazim, the head of the electricians’ group in the Azubi Car team, adds: “As far as the electronics are concerned, we are trying to develop and upgrade the technologies the SCALA comes with as standard, or in some cases fill a gap in its electronics. One example would be dynamic indicators at the front, which will replace the standard indicators. We are also working on a backlit logo on the rear. In its basic mode the logo will glow pale red. When you step on the brake pedal, the intensity of the red will increase, fully substituting a third brake light. And when you put the car into reverse it will shine white.” There is a noticeable glow of enthusiasm in his eyes as he talks about “his” technical innovation. 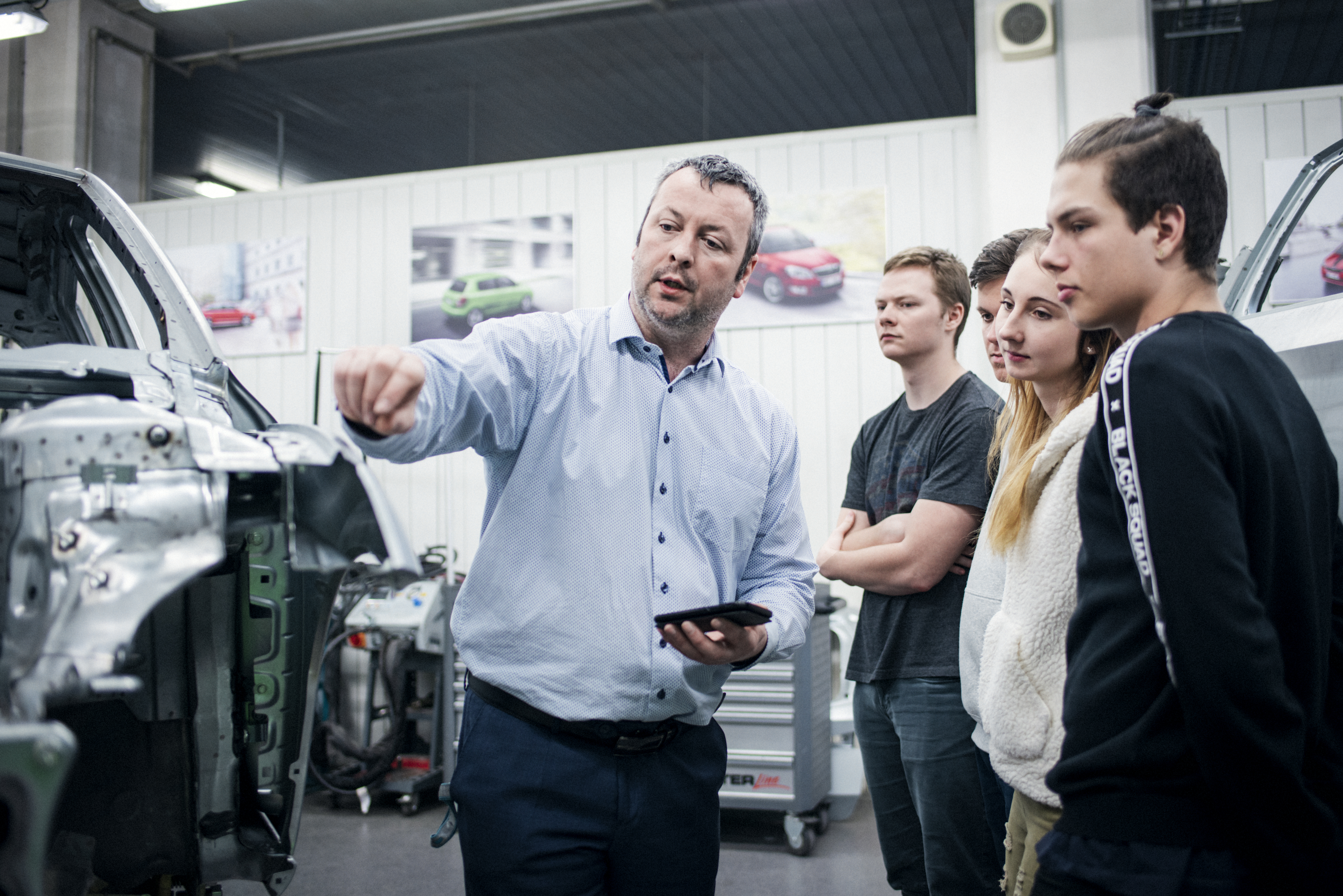 Like the members of previous Azubi Car teams, the current group agrees on one point: the hardest thing about the project is communication and looking for solutions that are acceptable to everyone. “I’d say that finding consensus is pretty easy in the various sub-groups, but when the entire project team meets it’s hard. We’re from lots of different fields here and we sometimes have very different perspectives on issues. That means we have to look for compromises and learn to be less insistent on our demands,” says Arazim.

“Boys make up most of the team. Even though they often have a clearer idea about technical matters, us girls aren’t afraid to put forward our opinions either,” Zamlová says. Along with two other team members, Zamlová collects and collates the others' ideas and thoughts before presenting them to the expert mentors. 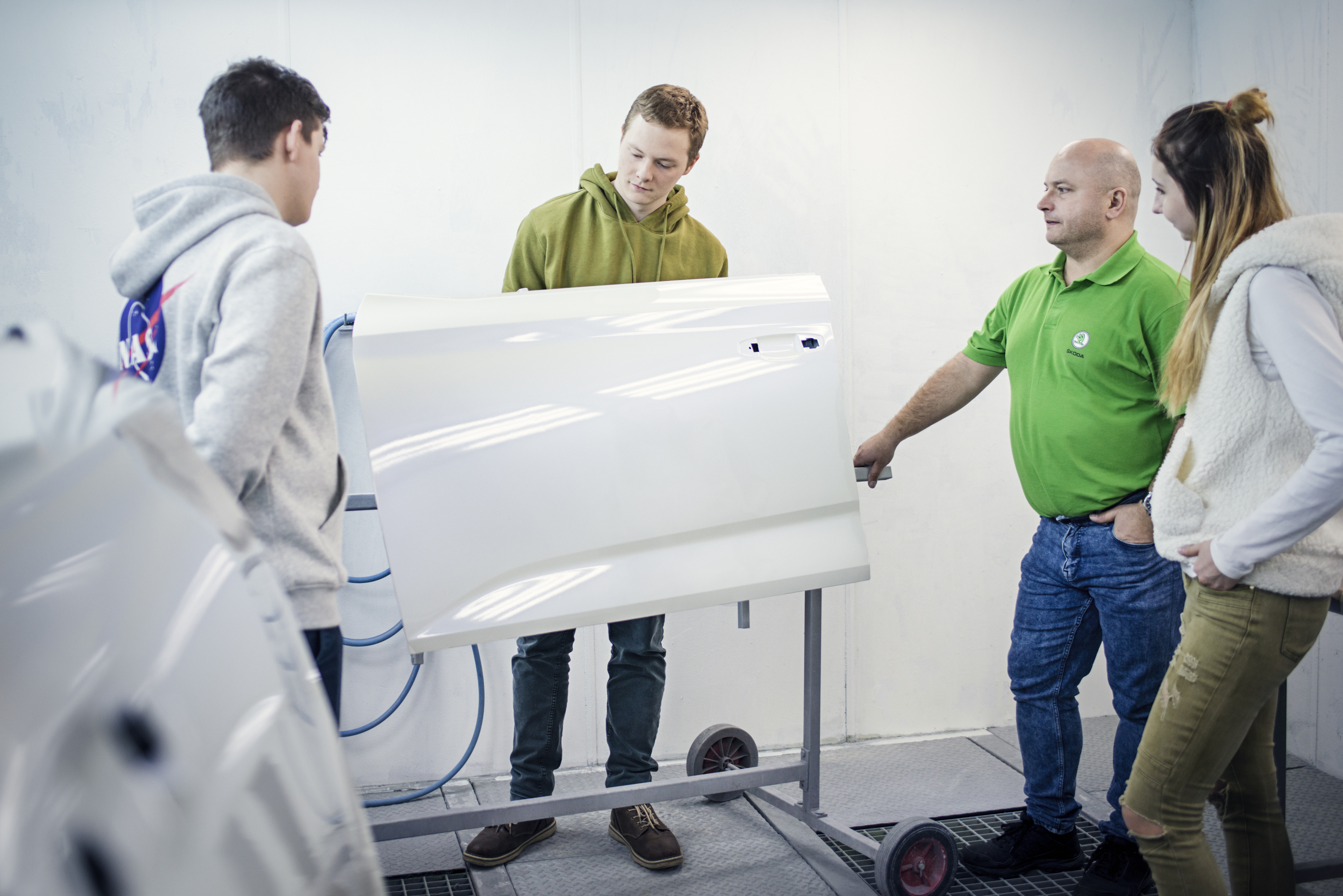 The entire team meets once a week for roughly two-hour discussions. The rest of the time they communicate remotely – the students have their own social networks group, where they discuss various steps, ideas, improvements and adjustments, even outside school hours.

“We often meet in the corridor during breaks and discuss various details. We also take the work home with us – we come up with suggestions we then work on together in school, where we choose and vote,” Kamil Šteiner from the painters’ group says. The makers of the student car can work on the concept as part of their practical coursework and can consult with their specialist teachers.

Huge support from the carmaker

All the students praise the cooperation they receive from the factory employees, who give them considerable support, help them develop ideas and make recommendations. “They also provide us with technologies we don’t have at school yet. They helped us with 3D printing of the backlit inscription, for example: Technical Development gave us information about the dimensions of the letters and the firm supplies us with parts to try out. These included front and rear bumpers, fog lights and headlights that we could disassemble,” Arazim recounts. 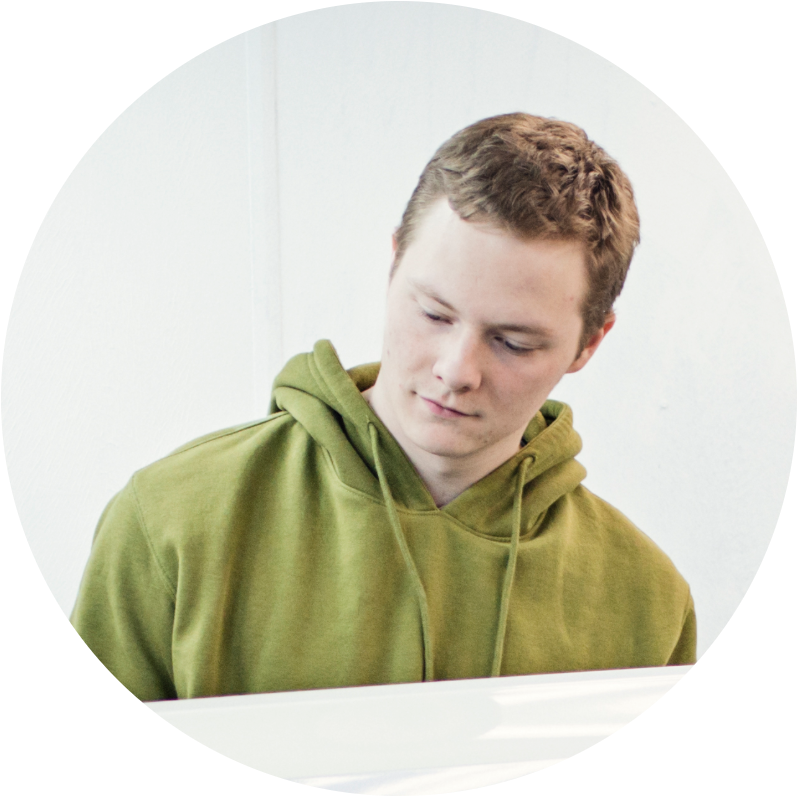 “Now we’re working on the interior, so the factory has provided us with seats to alter in line with our design. And for the body we got some phosphorescent powder for the paint,” adds Kamil Šteiner. 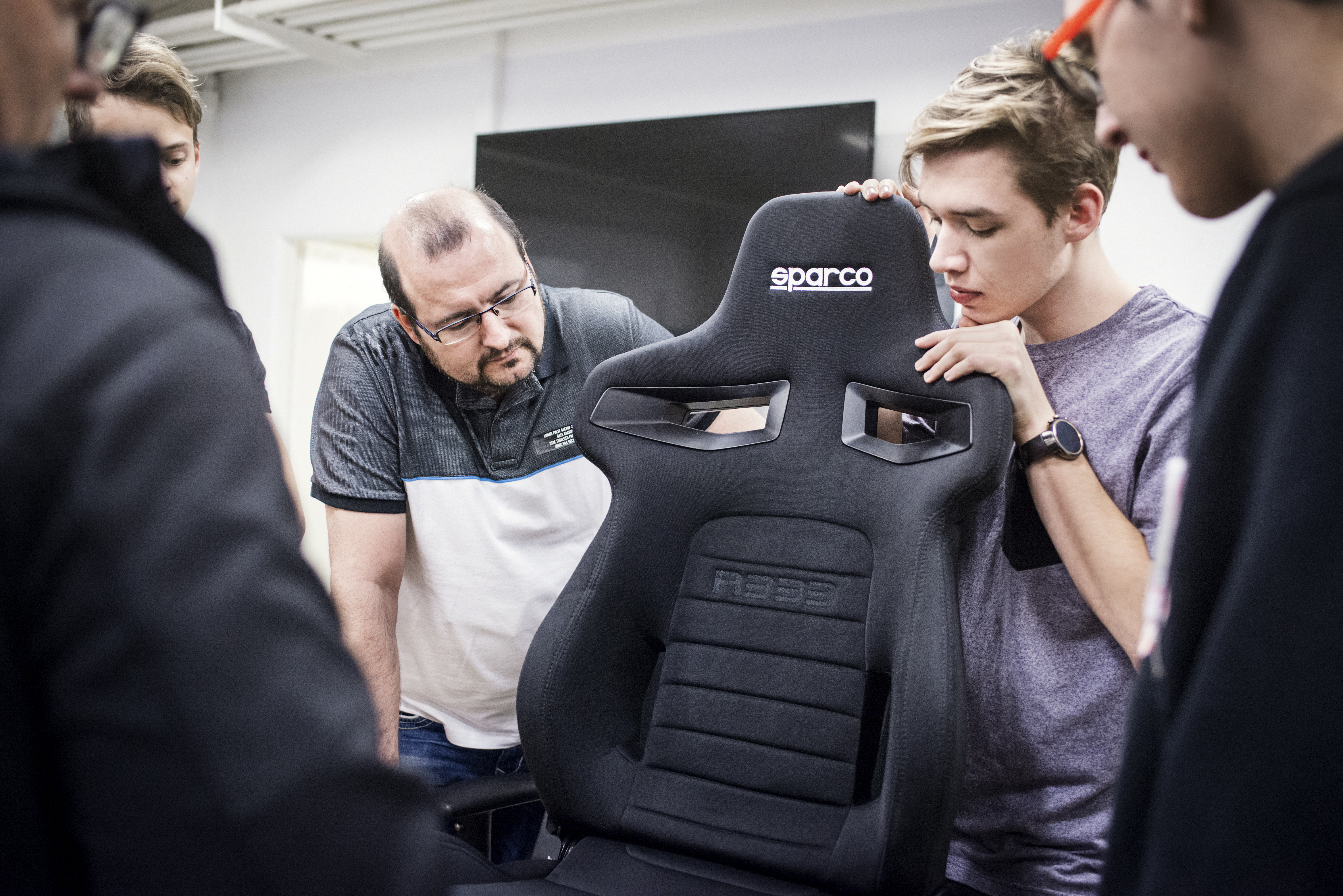 What do the students value most about the project? Learning lots of new and interesting information from fields outside their specialisation. Being able to try things out firsthand, take things apart and find out how they work. Learning both their trade and skills such as presenting their designs to an audience, which here includes the company’s senior management. “It’s a fabulous experience I’d never get otherwise,” Arazim says enthusiastically.

“This is the Azubi Car project’s seventh year and over the years it’s become something of a commitment. We don’t want to buck the trend and lower the high bar that’s been set,” says one of the teachers in charge of team communication and coordination. Ivo Vollman teaches Czech and English at the ŠKODA Academy. 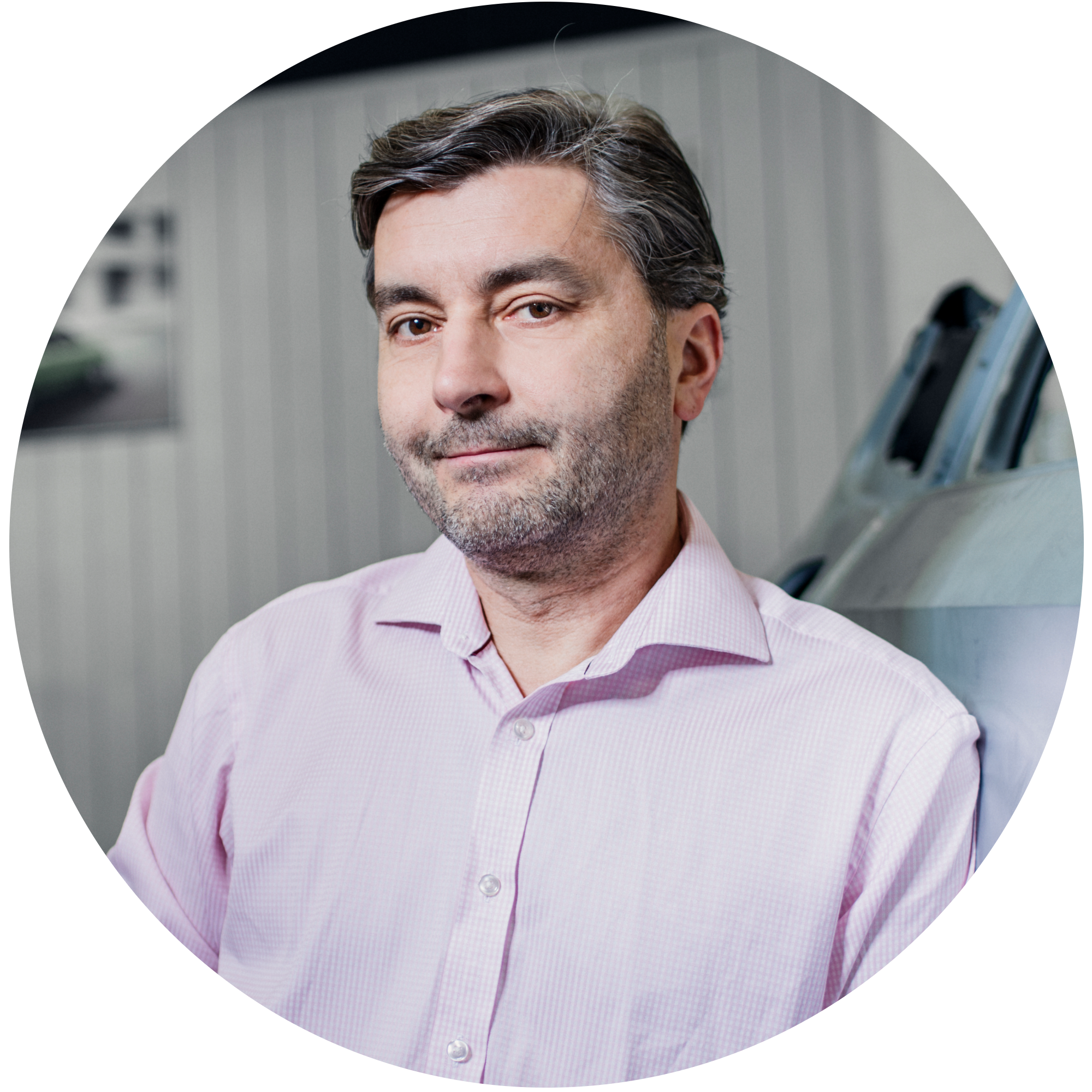 Does the project change from year to year?

Yes and no. Some processes have been taking place for so long that we’ve ironed out all the glitches, more or less. We’ve improved the working of the team and it’s fair to say there’s less work with that than there was before. On the other hand, every new year brings major challenges, not so much on the part of the team as with the brief, looking for an idea and executing it. Obviously there are also everyday changes that can’t be prepared for. But over the seven years it’s become a kind of trade we’ve learnt – we know how to go about things. But it would be very wrong to say the work takes care of itself.

Do you still enjoy it after all these years? What do you get out of the project?

I like working with young people, otherwise I wouldn’t teach here. Of course I enjoy it. It’s also a challenge for me – I want every year to be better than the previous years. I also like watching the changes: at the start we have a team of wide-eyed schoolkids who only know that they’d like to build some kind of a car. By the end they’re a team of self-confident young people who can present and stand up for their ideas, challenge each other, plan, improve and find compromises and adapt to others. The project doesn’t last all that long, so the change as they grow is all the more noticeable.

What’s the hardest part for you?

Overseeing communication within the team so that everyone passes on all the necessary information. That often doesn’t happen, and it’s up to us mentors to be able to guarantee it and help the students choose the right path. We also watch to see who plays what role in the team, and then we spend a long time deliberating and discussing which of the twenty active participants should be chosen to make the final presentation – because they all deserve it. We have to think long and hard who to choose for which role, so that they see it as recognition of their hard work.

I’d like to raise one more point: the specialist teachers play an absolutely crucial role in the project. They create the car together with the students. They are also the first critics, the ones who have to say: this is a good idea but that one is a dead-end. They give the students feedback they otherwise wouldn’t get. 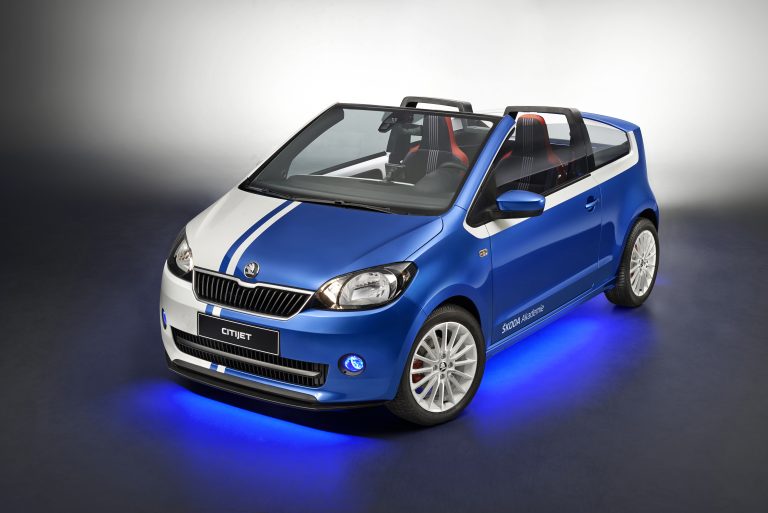 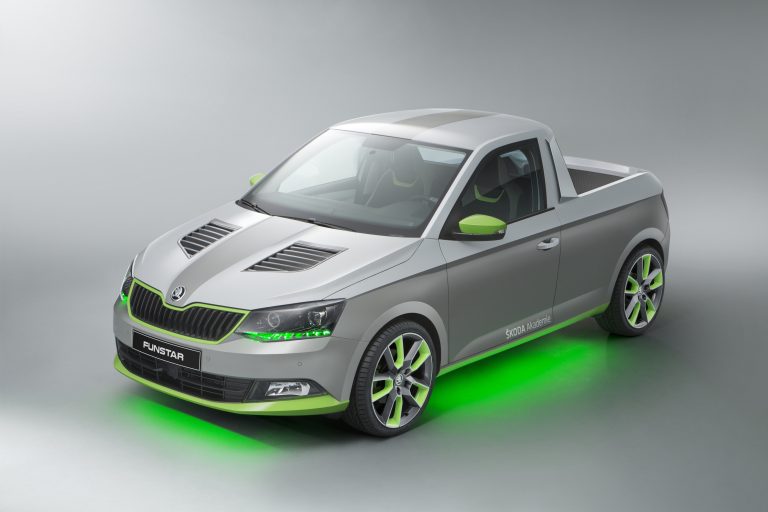 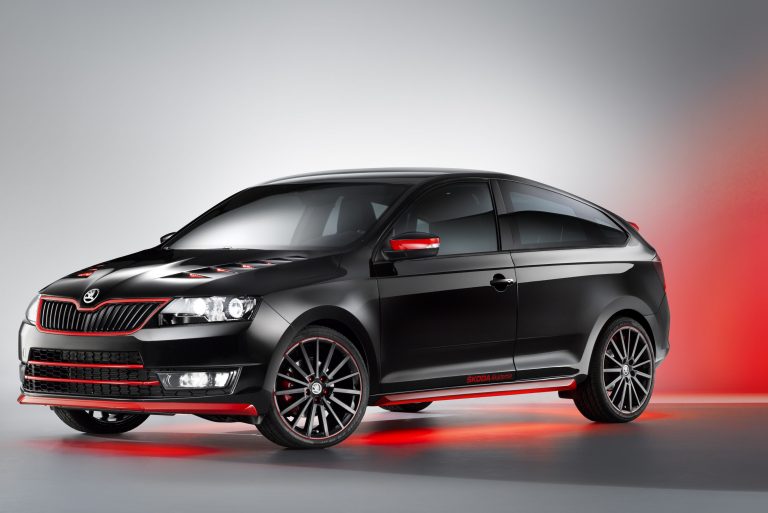 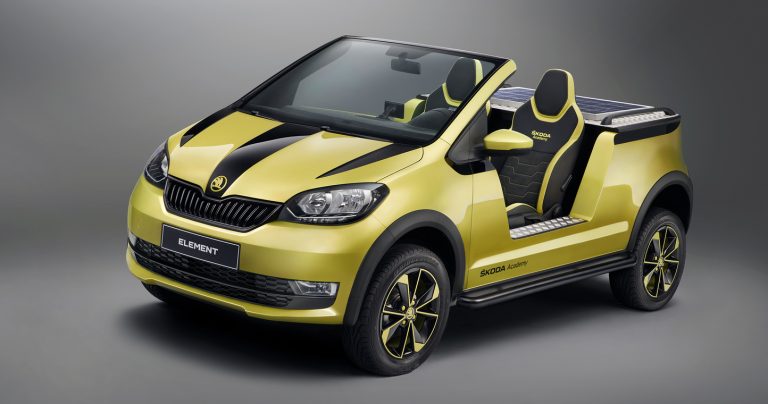 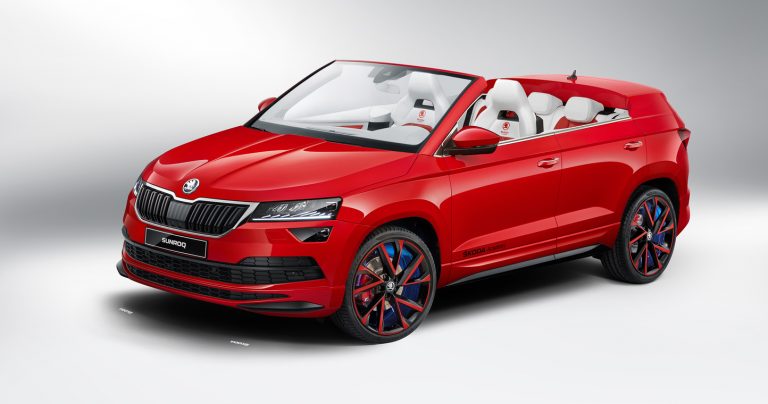 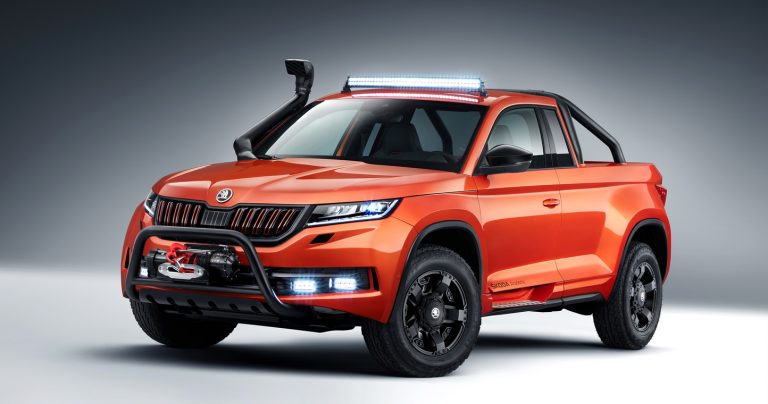 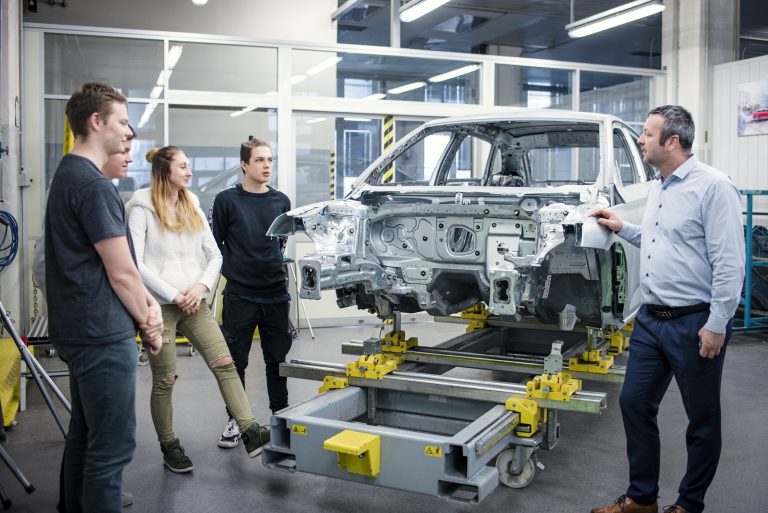 This yaer are students transforming the ŠKODA SCALA model into a sporty spider. 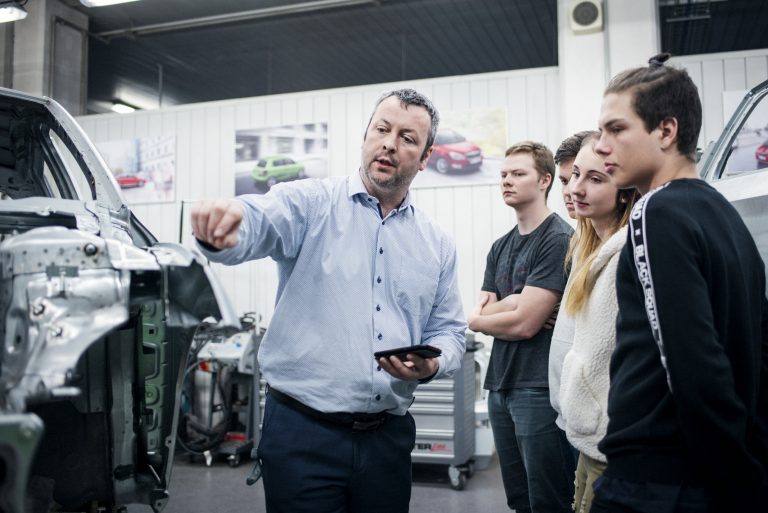 The hardest thing is communication and looking for acceptable solutions. 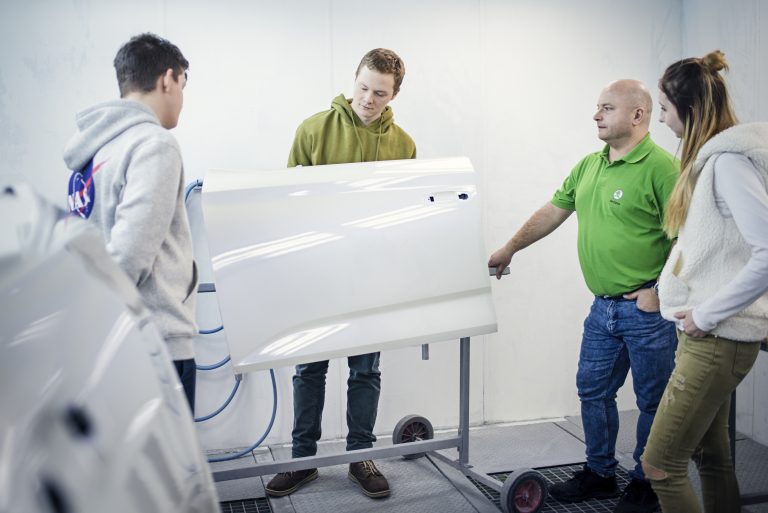 The entire team meets once a week for roughly two-hour discussions. 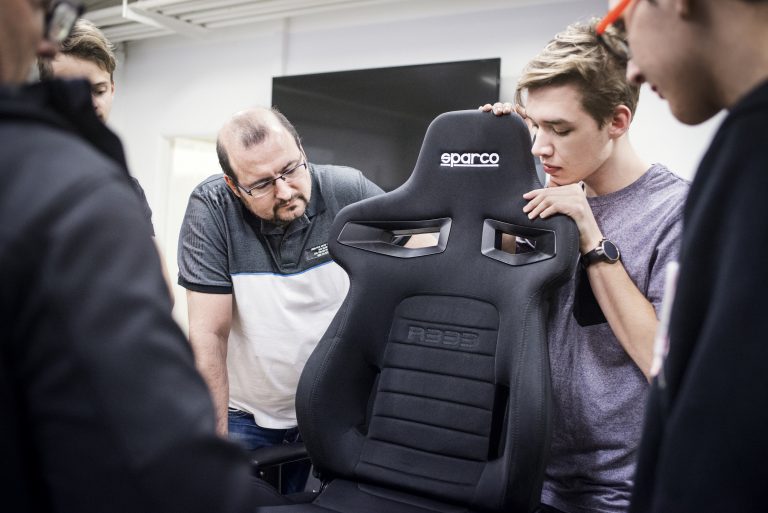 The students were working with experts on perfecting the seat design. 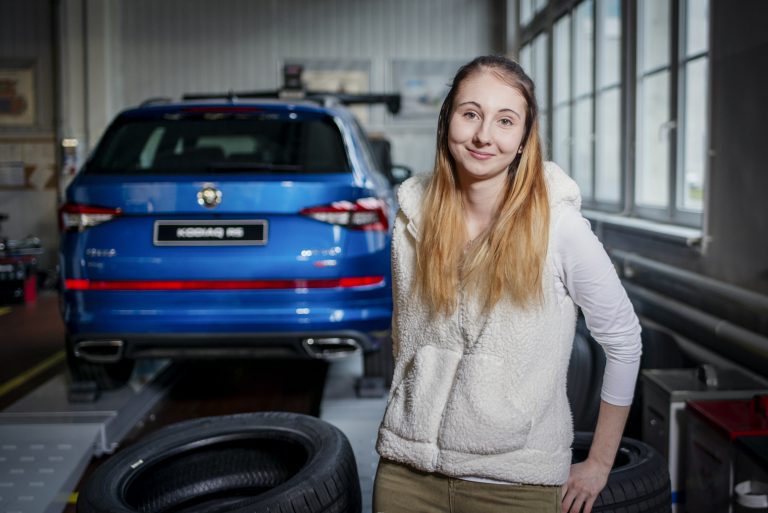 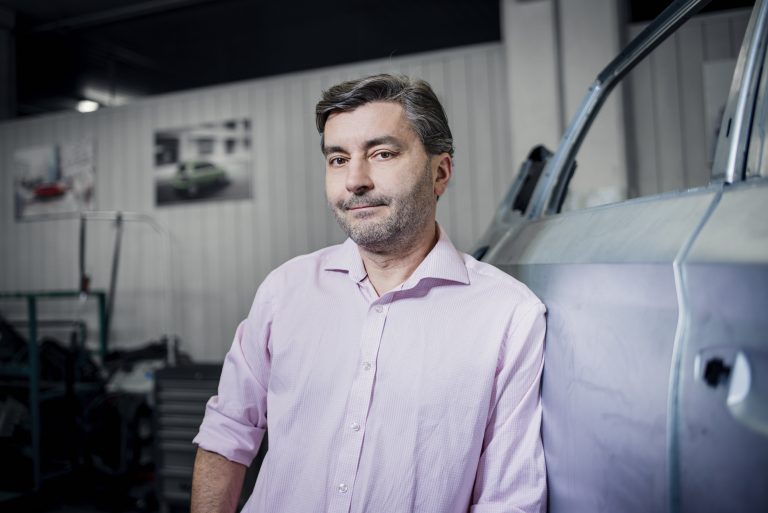