On 30 April 1982, production of the ŠKODA GARDE moved from Kvasiny to Bratislava. Today this coupé is a highly prized classic, as the constantly rising prices show. Find out about its history.

Sports coupés, i.e. cars with closed two-door bodies that evoke speed and dynamism, have a long tradition at ŠKODA. Many people still look badly fondly at the graceful elegance of the ŠKODA POPULAR Monte Carlo, while others are in the big fan club of the legendary iconic 1970s ŠKODA 110 R. And that car’s successor in 1981 was the ŠKODA GARDE. 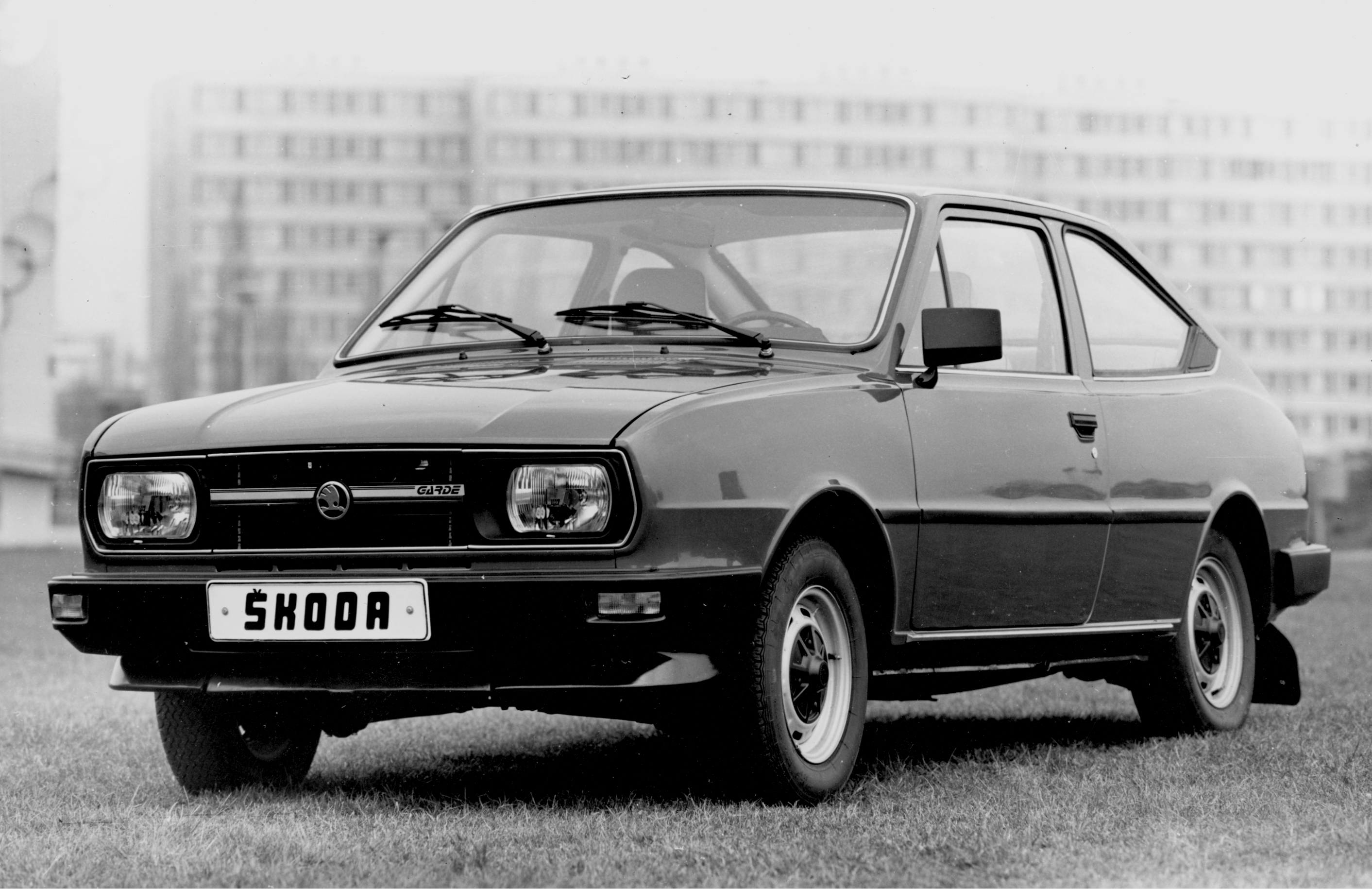 The GARDE was unveiled at the International Engineering Fair in Brno on 13 September 1981. Series production then began at the Kvasiny plant in early October 1981. The angular headlights and other modern features promised a significant step forward, even though the basic shape and concept of the rear-wheel drive car remained unchanged from the 110 R. The GARDE nevertheless brought a number of innovations. The precise rack and pinion steering and better-designed rear wheel geometry delivered improved handling. Instead of pendulum half-axles, the rear wheel suspension was a trailing wishbone and swing axle system.

The ŠKODA GARDE’s predecessor was the compact ŠKODA 110 R coupé, which premiered in September 1970. On wheels with 165 SR 14 radial tyres, the 110 R had a top speed of 145 km/h, could accelerate from nought to 100 km/h in 19 seconds and relied on high-performance twin disc brakes licensed from British manufacturer Dunlop at the front and drum brakes at the rear. The average fuel consumption of 8.5 litres per 100 km came from a 32-litre tank at the front, which also had space for 250 litres of luggage. The striking interior was dominated by a dashboard with a wood-look surface in the first cars, but that was soon replaced by a matt black finish. The ŠKODA 110 R was also a success on demanding foreign markets: in 1973 a full 93% of the six thousand produced 110 Rs headed abroad. Exotic destinations included New Zealand, Kuwait and Nicaragua. A total of 57,085 ŠKODA 110 Rs were built at Kvasiny up to 30 December 1980. 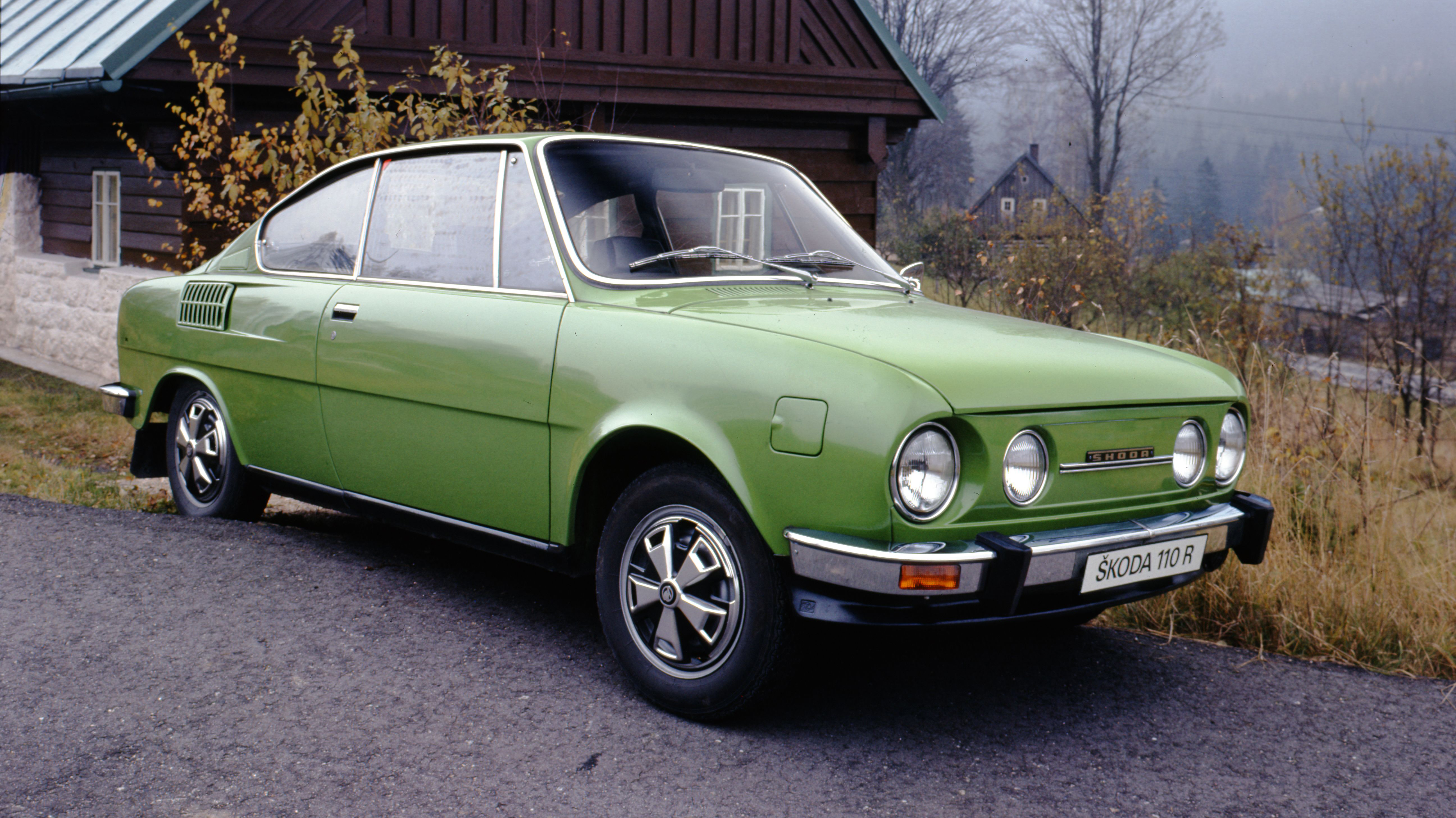 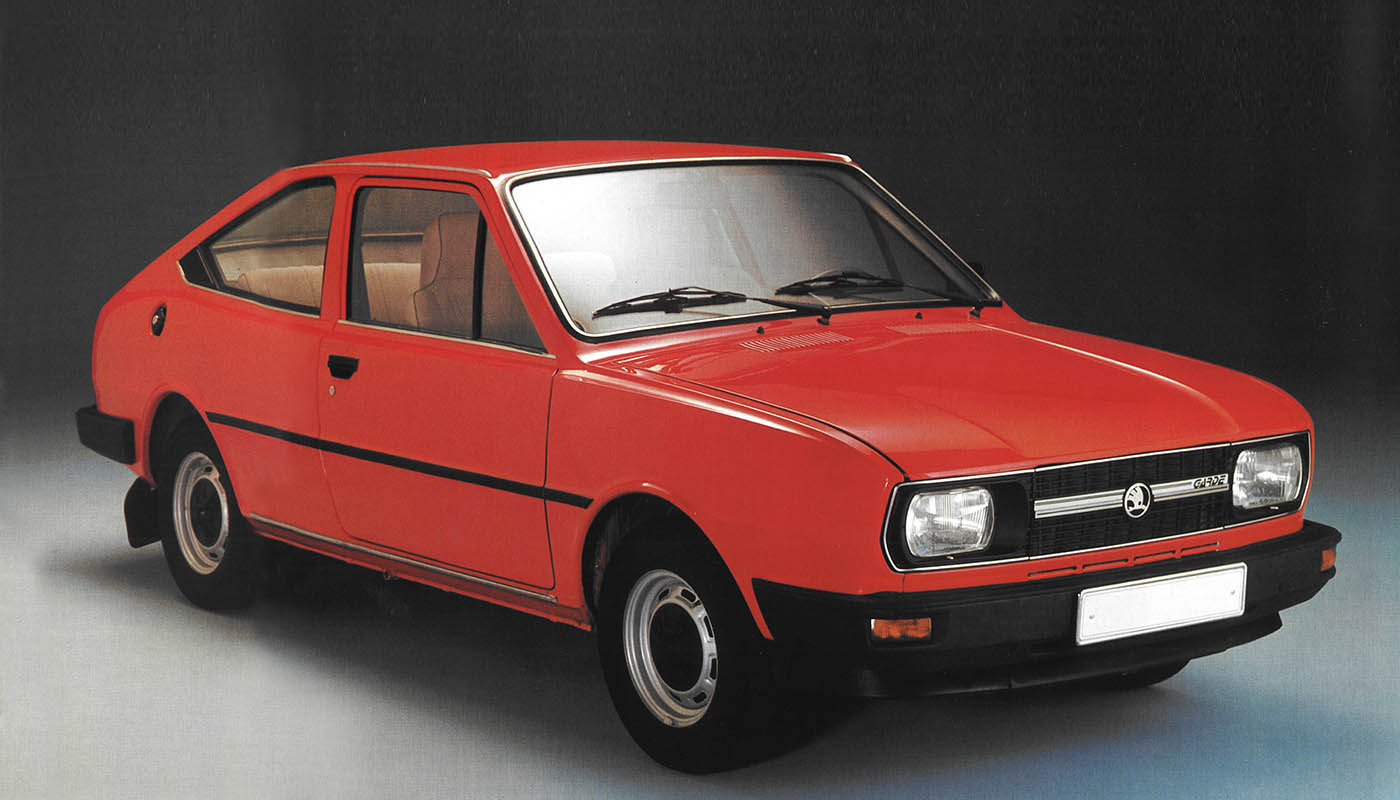 The GARDE went from zero to 100 km/h in 18 seconds and topped out at 150 km/h – though a top speed of 153 km/h is also claimed. At that speed, drivers appreciated the power brakes and inertia-reel Moravan Super Rol seatbelts which, for an extra charge, could be attached to front seats that were height-adjustable and had integrated headrests.

Measuring 4,175 mm long, 1,610 mm wide and 1,380 mm high, the coupé had a kerb weight of just 915 kg. On 4 September 1981 the ŠKODA company magazine of the period, Ventil (or Valve), the manufacturer announced the following “colour range” for the two-door body: white, champagne beige, rosehip red and olive green, with metallic silver, bronze or red available at an additional cost. The standard of passive safety was enhanced by the unmistakable PREPREG plastic bumpers, essentially a mat of short glass fibres impregnated with resin and hot-moulded. 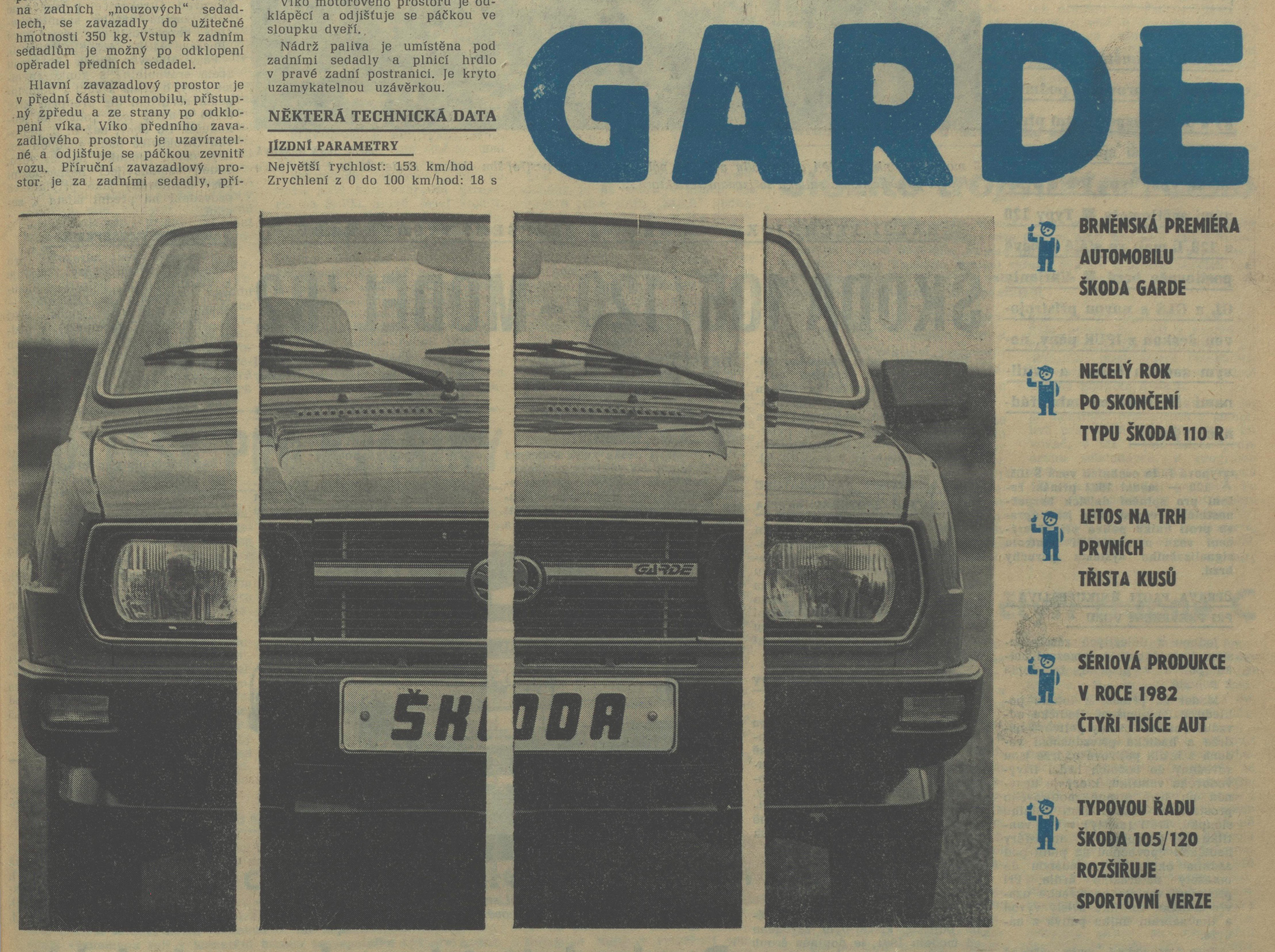 On 4 September 1981 the company’s magazine, Ventil, was devoted to the new model.

The ŠKODA GARDE was not just elegant to look at: the coupé boasted several innovations. If not for the world, then at least for the Czechoslovak market at the time. Head-turning features included the 165 SR 13 tyres with OR 29 tread and, above all, the stiffer body in which steel wires replaced the textile bumper strip. This led to a longer-lasting body shell, lower rolling resistance and thus also better fuel consumption. Compared to the 110 R, the average consumption was reduced by 0.7 litres per 100 km: the official figures were 6.5 l at a constant speed of 90 km/h, 9.2 l at 120 km/h and 8.9 l in urban traffic conditions. The 1,174 cm3 four-cylinder engine delivered a power output of 42.7 kW (58 hp) and ran on 96 octane petrol. 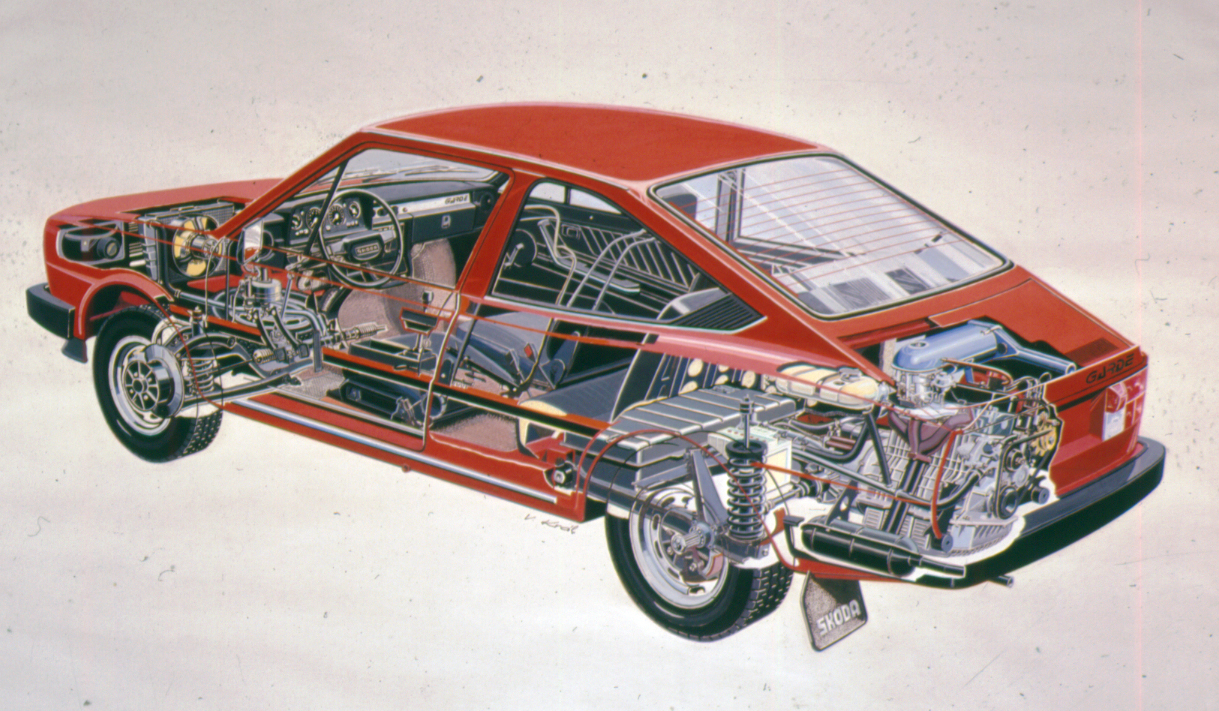 At the turn of the 1970s and 1980s, the development department of the Bratislava Automobile Works (Bratislavské automobilové závody, or BAZ), founded on 1 July 1971, had almost four hundred employees. In addition to cooperating with domestic brands, the company had also been planning licensed production of foreign sports cars in Slovakia. Eight units of the Alfa Romeo Giulia, for example, underwent intensive testing here. In March 1980, the directors of BAZ and ŠKODA signed a contract for the annual production of 80,000 ŠKODA saloons and 17,000 coupés in the Slovak capital every year. 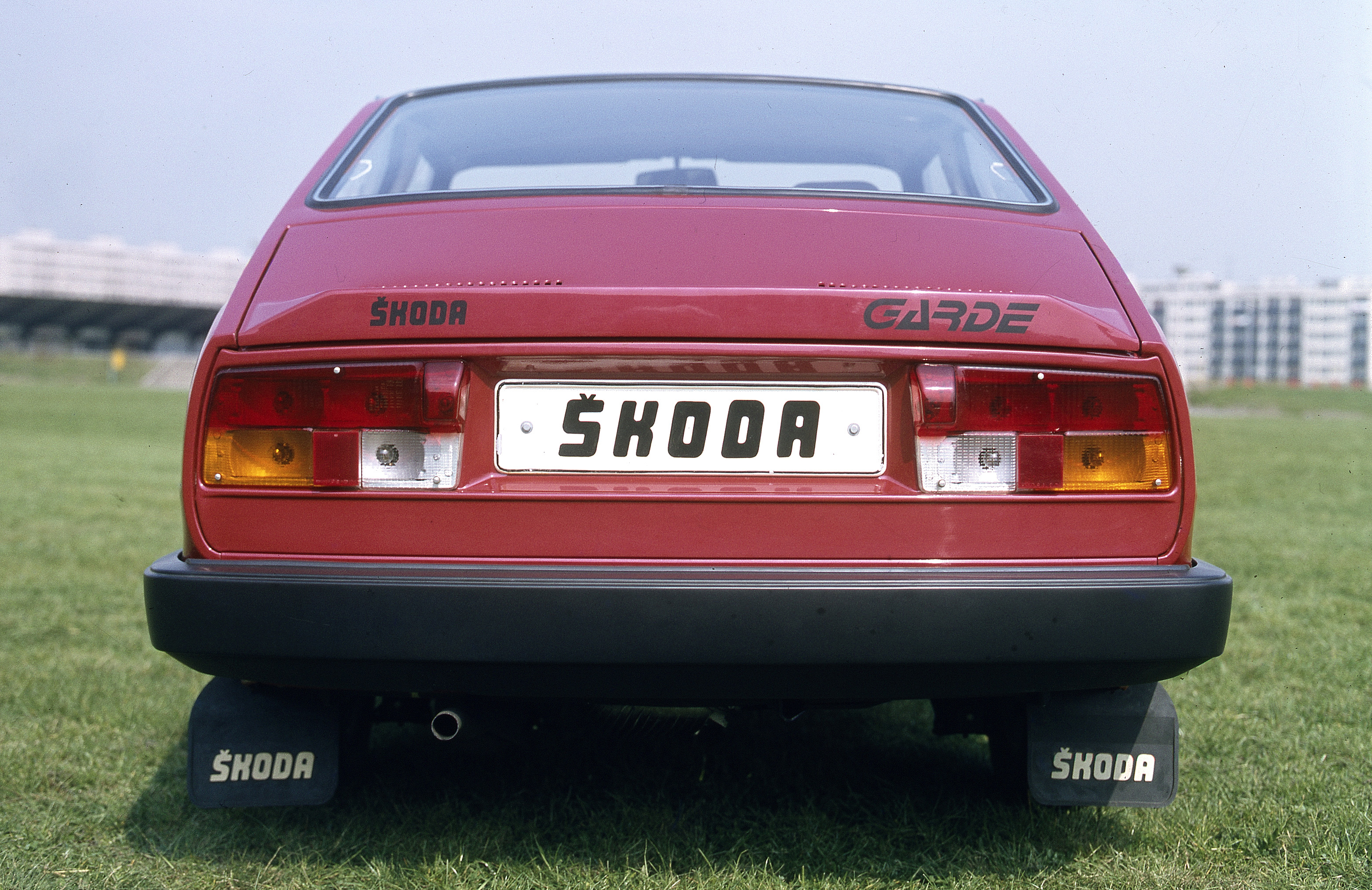 One striking modernised feature on the GARDE was its angular tail lights.

On Friday, 30 April 1982, ŠKODA car production started in Děvínská Nová Ves, on the northwest outskirts of Bratislava, although for propaganda reasons the date of May 1, Labour Day, was featured in the period photograph. The main production article was the GARDE coupé, as manufacture in Bratislava had been reckoned with from the development phase – the original plan had been that the model would be produced in Kvasiny and Bratislava at the same time.

This original plan was delayed, though, and Bratislava did not get its GARDE until several months later. Despite the huge state investment, however, the average speed of GARDE production was just one and a half cars a day, resulting in only one thousand coupés made in the first twenty months. Around three and a half thousand GARDE units were built at BAZ in the course of three years. That is dramatically less than the originally planned 17,000 per year – and the contemplated 80,000 sedans never materialised at all! 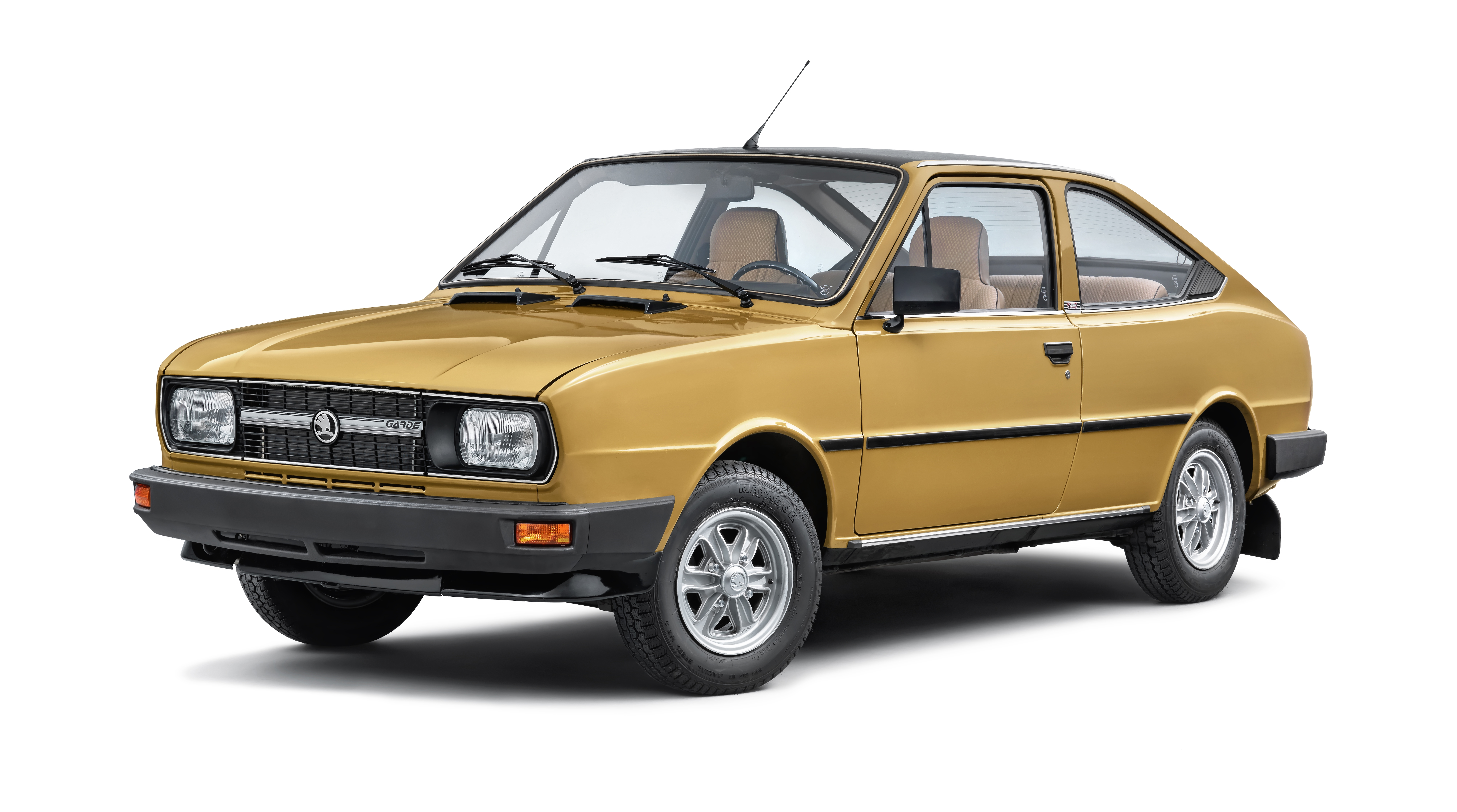 In addition to finished GARDE cars, axles and other components for ŠKODA cars and other domestic brands were made in Bratislava. Some prototypes were also developed here, but none made it into series production. The Locusta coupé, for example, was based on the GARDE model, but with a 70 mm longer wheelbase. A number of other BAZ projects for passenger cars and light commercial vehicles based on rear-engined ŠKODA models never got off the ground.

We should add that the GARDE gave way to the ŠKODA RAPID coupé, unveiled in September 1984. Their production history was the same: first in Kvasiny and later transferred – though this time only partially – to Bratislava. 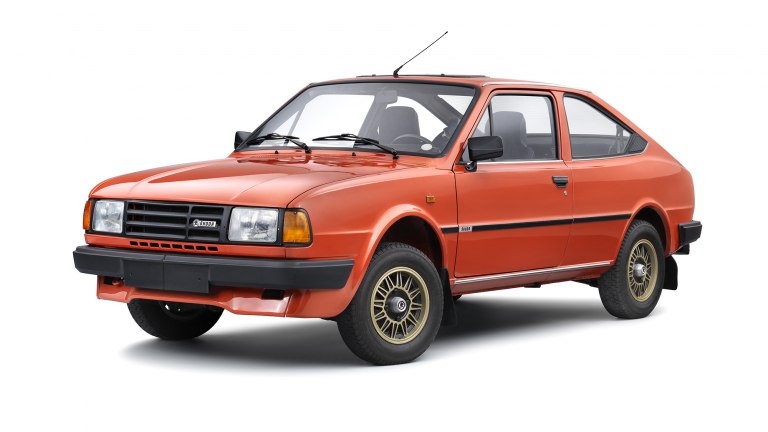 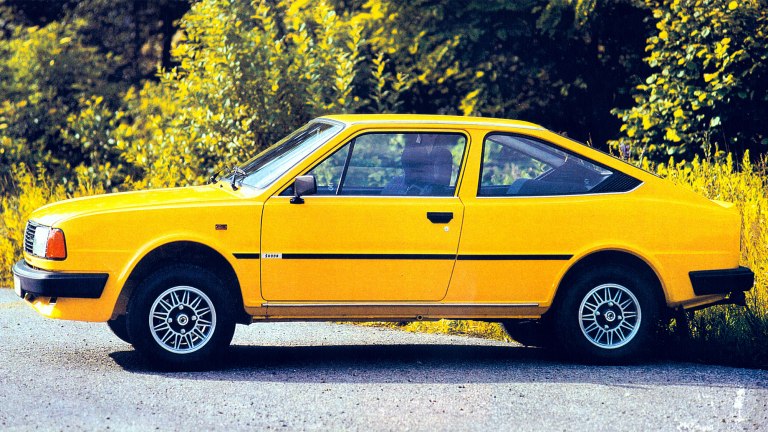 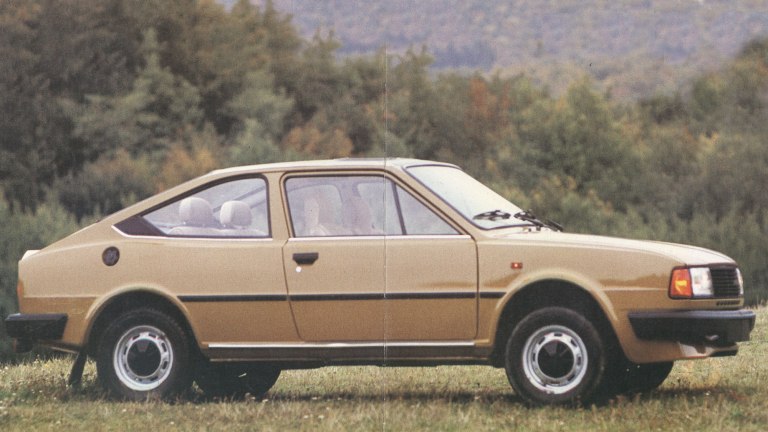 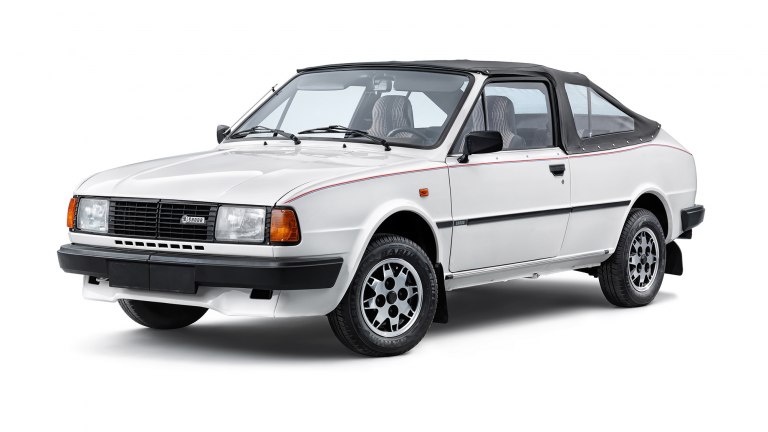 The turning point in the history of BAZ came in May 1991, when 80% of the shares in the new Volkswagen Bratislava joint venture were taken over by the firm that was already the biggest European car manufacturer. Volkswagen acquired sole ownership seven years later. The modernised and expanded factory began to make VW Passat cars of the B3 generation, later adding various models from the Audi, Porsche, Seat and ŠKODA brands. And it was the ŠKODA GARDE coupé that started all this 40 years ago. 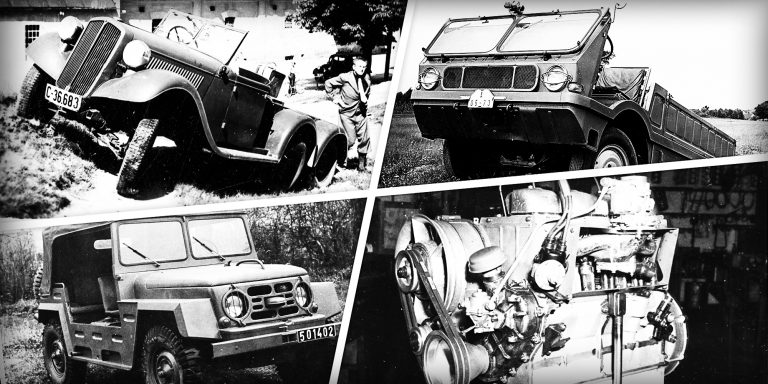 40 YEARS AGO THE ŠKODA GARDE HEADED TO BRATISLAVA 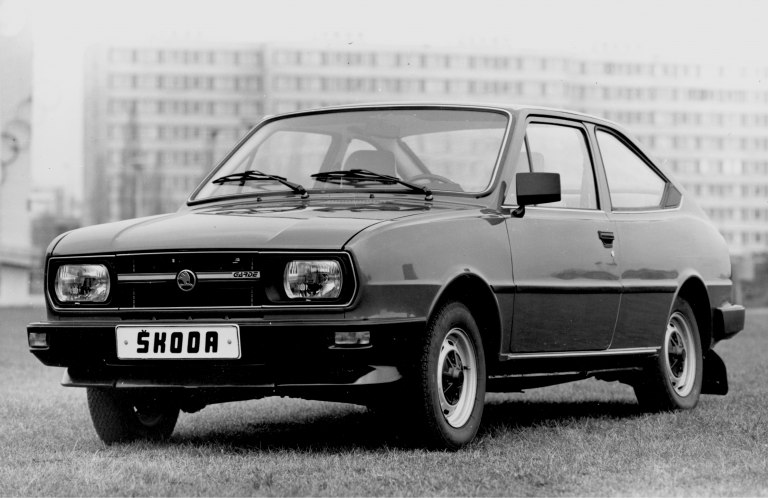 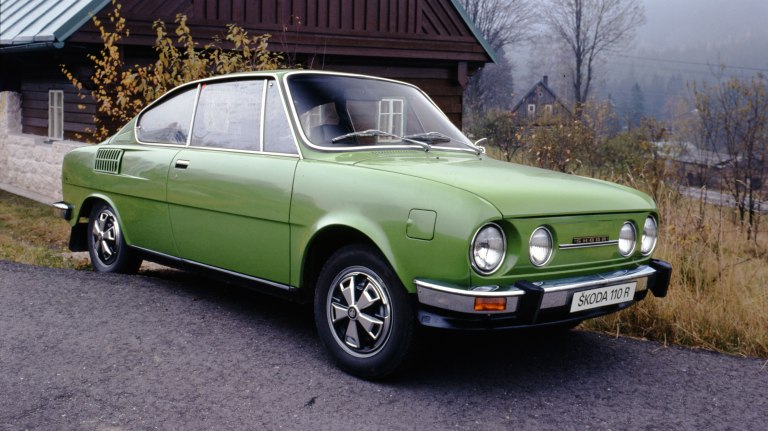 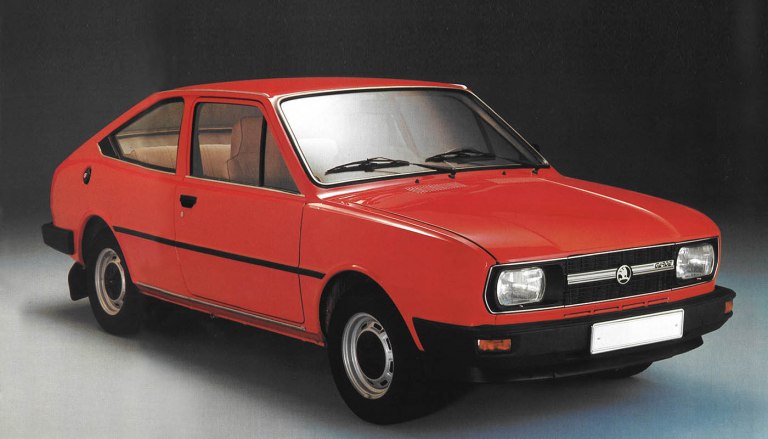 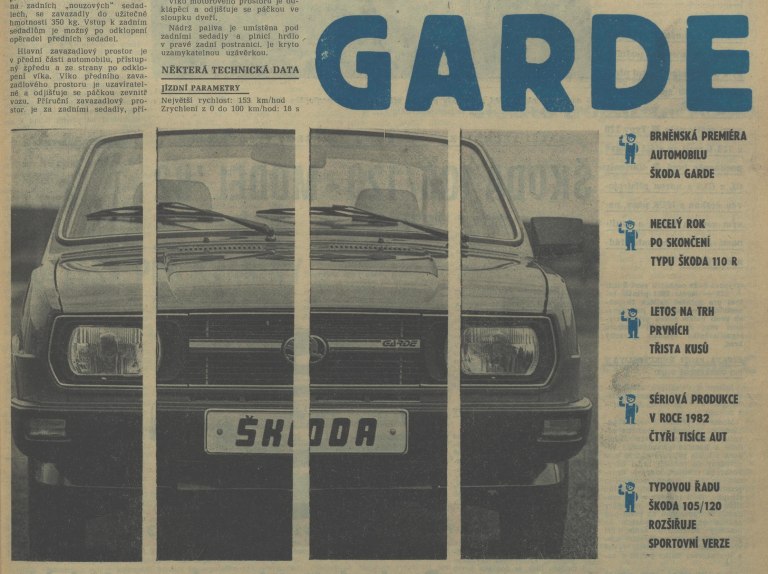 On 4 September 1981 the company’s magazine was devoted to the new model. 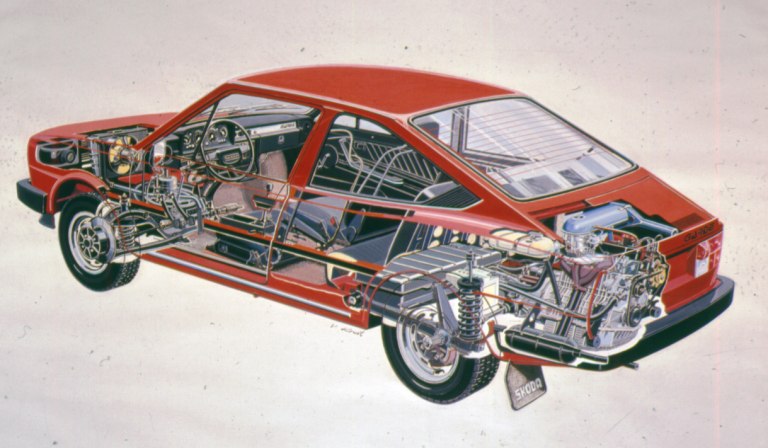 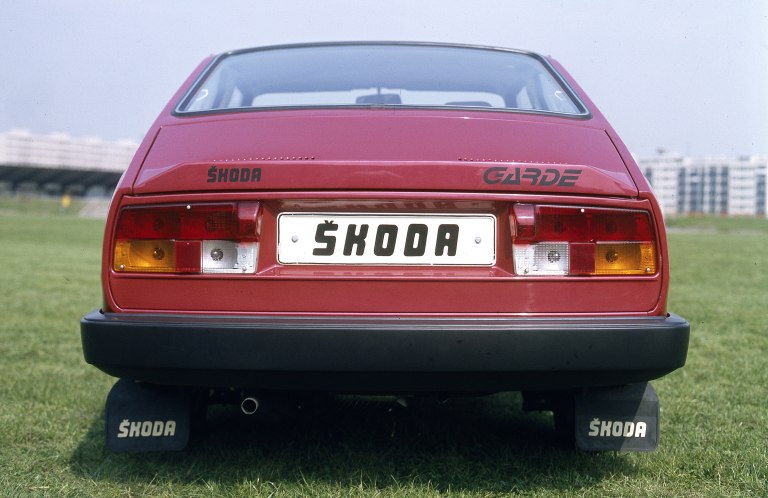 One striking modernised feature on the GARDE was its angular headlights. 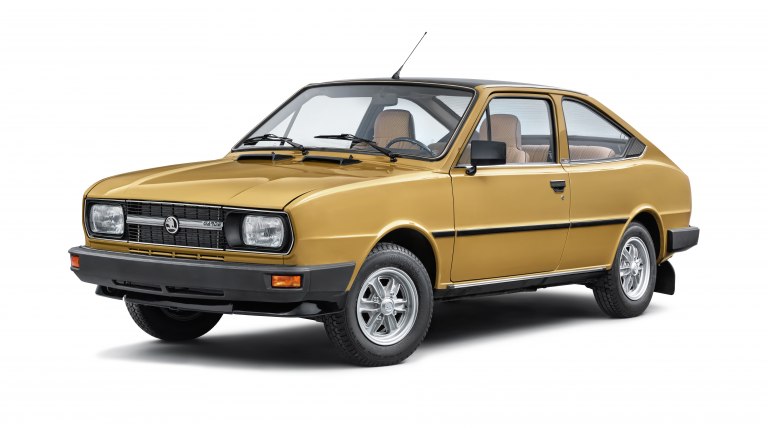