Stanislav Cinkl headed ŠKODA’s prototype workshop for twenty years. His involvement in the Czech carmaker’s development started long before that, though. Discover some of the prototypes he worked on during his long career.

Fans of the Czech car brand know Stanislav Cinkl primarily as the long-standing (1992-2012) coordinator of prototype assembly, i.e. the head of the prototype workshop. But he joined ŠKODA in 1958 and was responsible for the completion of the FERAT (ŠKODA 110 SUPER SPORT) for the film The Ferat Vampire, which he himself drove in this horror film by Czech director Juraj Herz. He is also credited with promoting the change to front-wheel drive and getting prototypes into a suitable state of readiness for mass production.

When he was reunited with his prototypes at the ŠKODA Museum years later, it was obvious that he was happy to see them. Come and discover them with us.

In 1964, manufacturing of the rear-engined ŠKODA 1000 MB got underway at the new plant, but production was not progressing as originally planned, so management of the company was entrusted to the team of the new director Josef Šimon – the now legendary “Magnificent Seven”. That was the nickname given to the technicians and managers who promoted the development of alternative models matching the latest development trends in the most advanced countries. 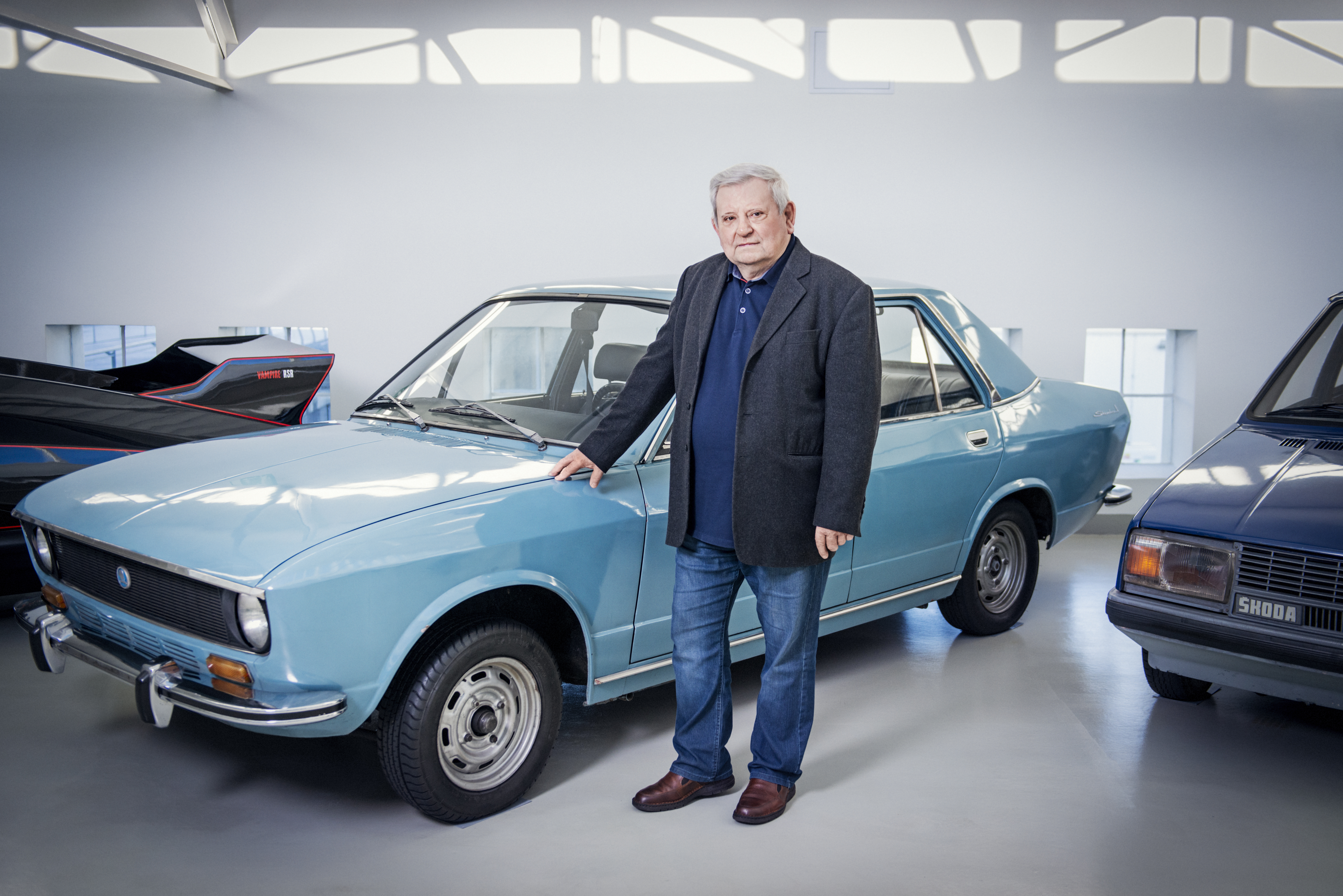 In 1966, five prototypes of the ŠKODA 720 were built, with different body styles based on designs by local designers. The management was not satisfied, however, and took the visionary step of turning to the then nascent Ital Design studio set up by star designer of the future Giorgetto Giugiaro. The contract was signed in May 1969, and by the 30th of August the first 1.5 litre sedan with rear-wheel drive was finished. Other sedans, fastbacks and estates with 1,498 cc and 1,236 cc four-cylinder engines followed.

Stanislav Cinkl remembers the high quality of the work the Italians did in the tightest possible deadline. He recalls that the Turin-based design studio described them as mere mock-ups, but ŠKODA nevertheless put them through tens of thousands of kilometres of demanding tests – and found no serious flaws. During our meeting in the ŠKODA Museum’s depository, Cinkl also points out the timelessness of the design and the balanced proportions of the blue ŠKODA 720 ID mid-range sedan. 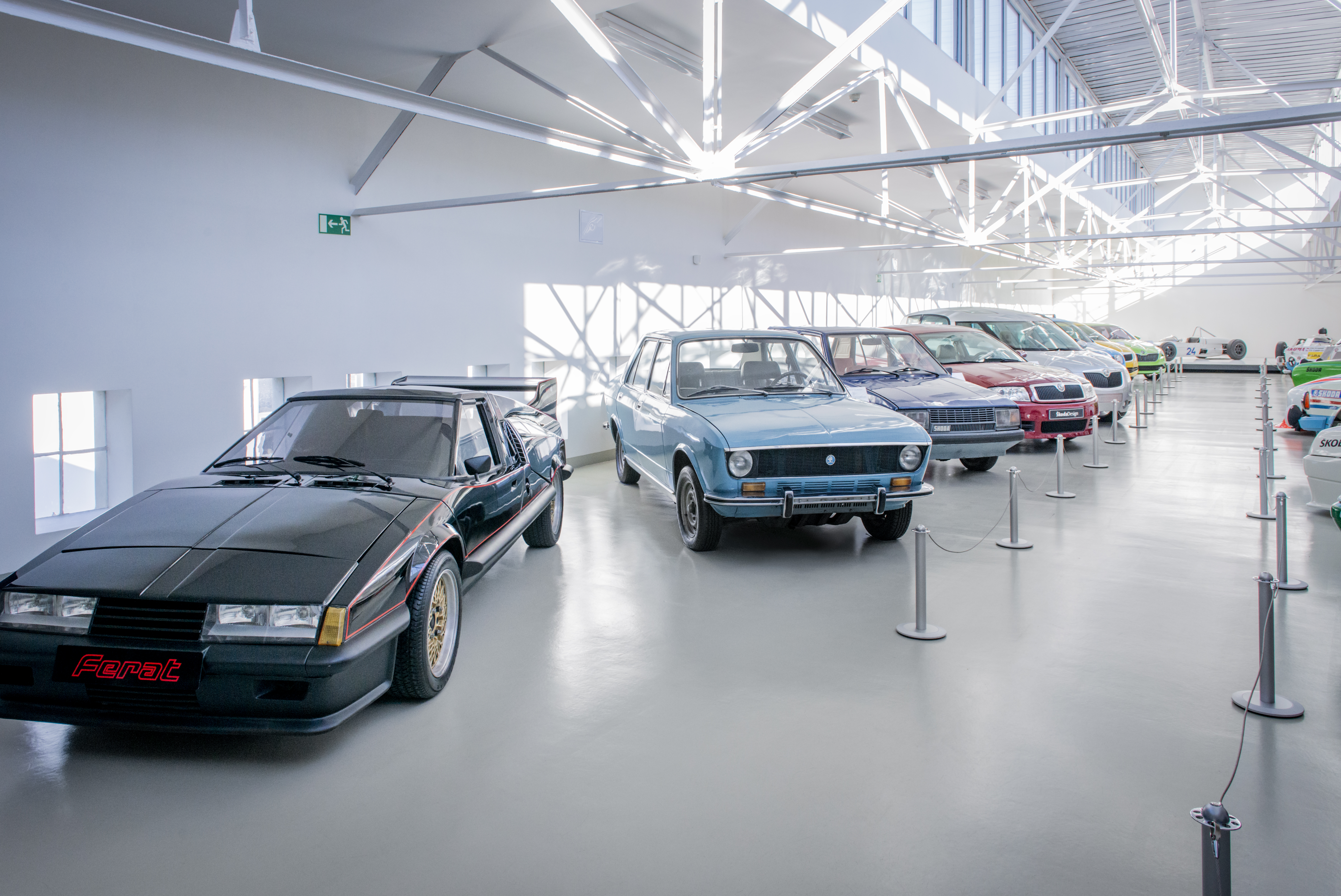 The FERAT and ŠKODA 720 ID in the ŠKODA Museum depository

But despite very promising results and advanced stage of preparations – retail prices had even been calculated – mass production of the Czech-Italian creation never materialised. Political decisions influenced by the communist regime put projects associated with the opening up of Czechoslovakia to the world in the late 1960s on ice and the Magnificent Seven team was disbanded.

This was followed by a ban on the operation of the ŠKODA 720 series prototypes, so the remaining examples were sold off to private buyers. By the mid-1970s, intensive work was already underway on the development of the rear-engined Š 742 series of “105s” and “120s”, which debuted in the autumn of 1976. It is not a coincidence that their bodies resemble the Italian lines of the ŠKODA 720 ID developed seven years earlier.

It’s fair to say that the ŠKODA 110 SUPER SPORT, which Stanislav Cinkl spent a long time developing, marked the end of the Magnificent Seven era. The car made its first appearance in the May Day parade at Kvasiny in 1971, and on the 6th of May the then head of the company’s testing department handed the car over to Cinkl (as a birthday present) to get the car approved by all the specialist teams. A period of tests, modifications and even public presentations followed. “After the car was handed back to the Mladá Boleslav plant, the aim was to make three more cars with front-facing OHC engines from 1,498 to 1,772 cc from the ŠKODA 720, with a strengthened rear axle designed for extra stress and a gearbox taken from the eight-cylinder Tatra 603. Suppliers of axles and brakes had also been selected. However, political pressure once again meant that the project’s chief supervisor had to leave his post, and so the Super Sport never got beyond the stage of a single prototype,” recalls Stanislav Cinkl. 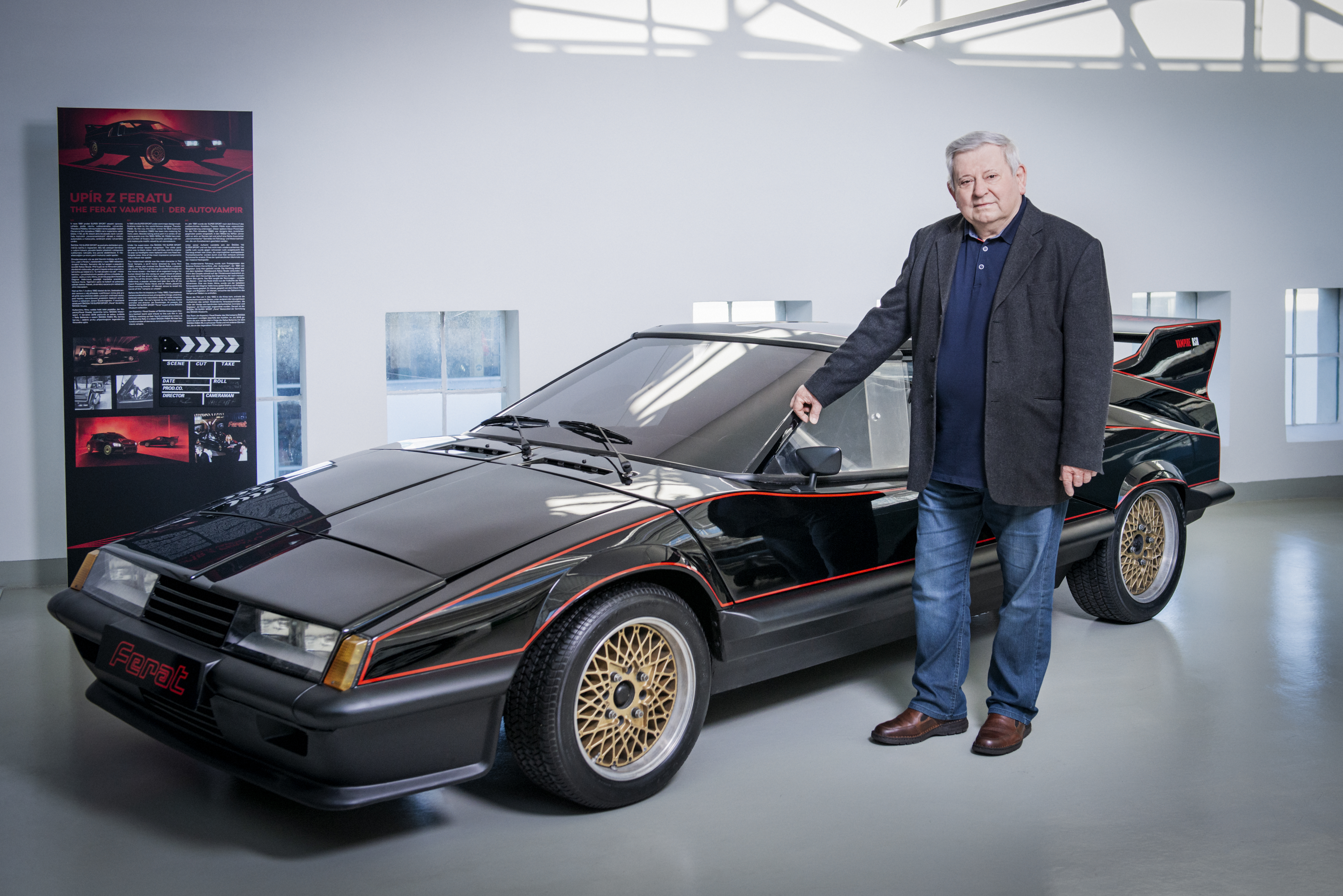 In the 1980s, Stanislav Cinkl modified the only prototype of the ŠKODA 110 SUPER SPORT to turn it into the ŠKODA FERAT for The Ferat Vampire movie.

With a team of collaborators, he prepared the coupé for an attempt to break the domestic speed record in the small-engine class. For their attempt they chose a stretch of road in a forest between Týniště nad Orlicí and Třebechovice. “On the first run we hit a speed of 219 km/h, which would have been a new Czechoslovak record, but on the way back to Týniště we only managed 212 km/h, so the average of both runs fell short of the record.”

In 1973, Cinkl drove this prototype in the prologue of the Šumava Rally in Klatovy. This was by no means his first experience with the world of fast wheels. He started out in rallying in 1965 as a co-driver, later building his own car nicknamed the “jumping 1000” and based on a ŠKODA 1000 MB sedan. He only quit his independent and self-funded racing career in 1970, when the family budget could no longer support it. By the way, he got his slightly crash-damaged “MB”, which he modified for the sport of autocross that was just starting out in Czechoslovakia at the time, in exchange for a hand-renovated 1904 Laurin & Klement CCD motorcycle, which he donated to the ŠKODA Museum. 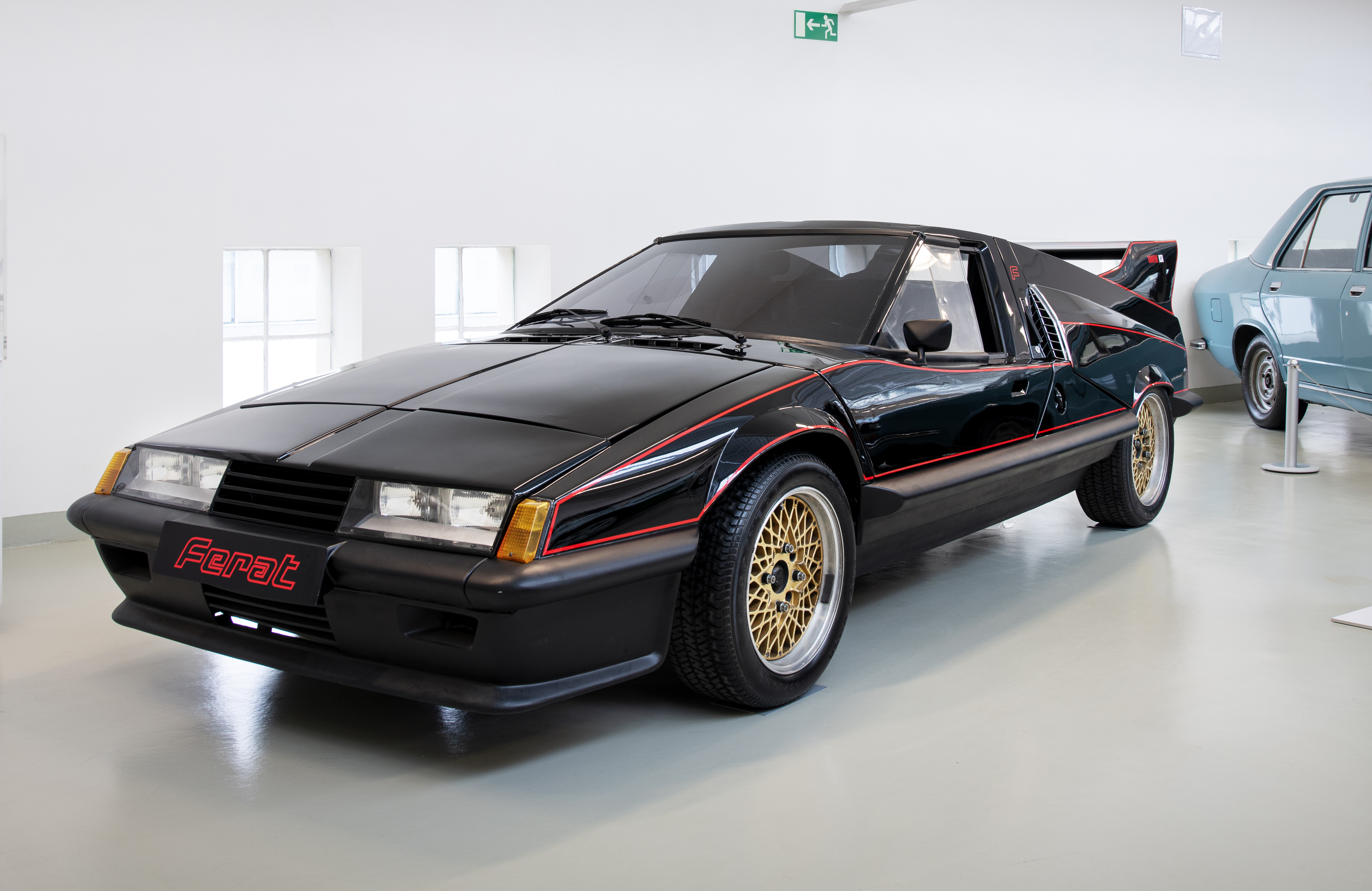 At the ŠKODA Museum, Stanislav Cinkl’s description of his relationship with the ŠKODA 110 SUPER SPORT takes place in front of the famous black FERAT. This was created in the early 1980s by modifying the only unit made of the original light-coloured coupé. The stunning looks of the main prop in Juraj Herz’s horror film The Ferat Vampire (released on 1 May 1982) was designed by Oscar-winning film designer and racing driver Theodor Pištěk. When some of the scenes with the car were filmed, Stanislav Cinkl crouched under the dashboard while the camera focused on the actress behind the wheel, Jana Břežková. In other shots he drove the car himself. According to the script, the racing car was powered by fresh human blood instead of petrol, and one scene that fell foul of the censors featured highly naturalistic shots of real cattle entrails that were arranged under the coupé’s bonnet by the world-famous animator and director Jan Švankmajer. 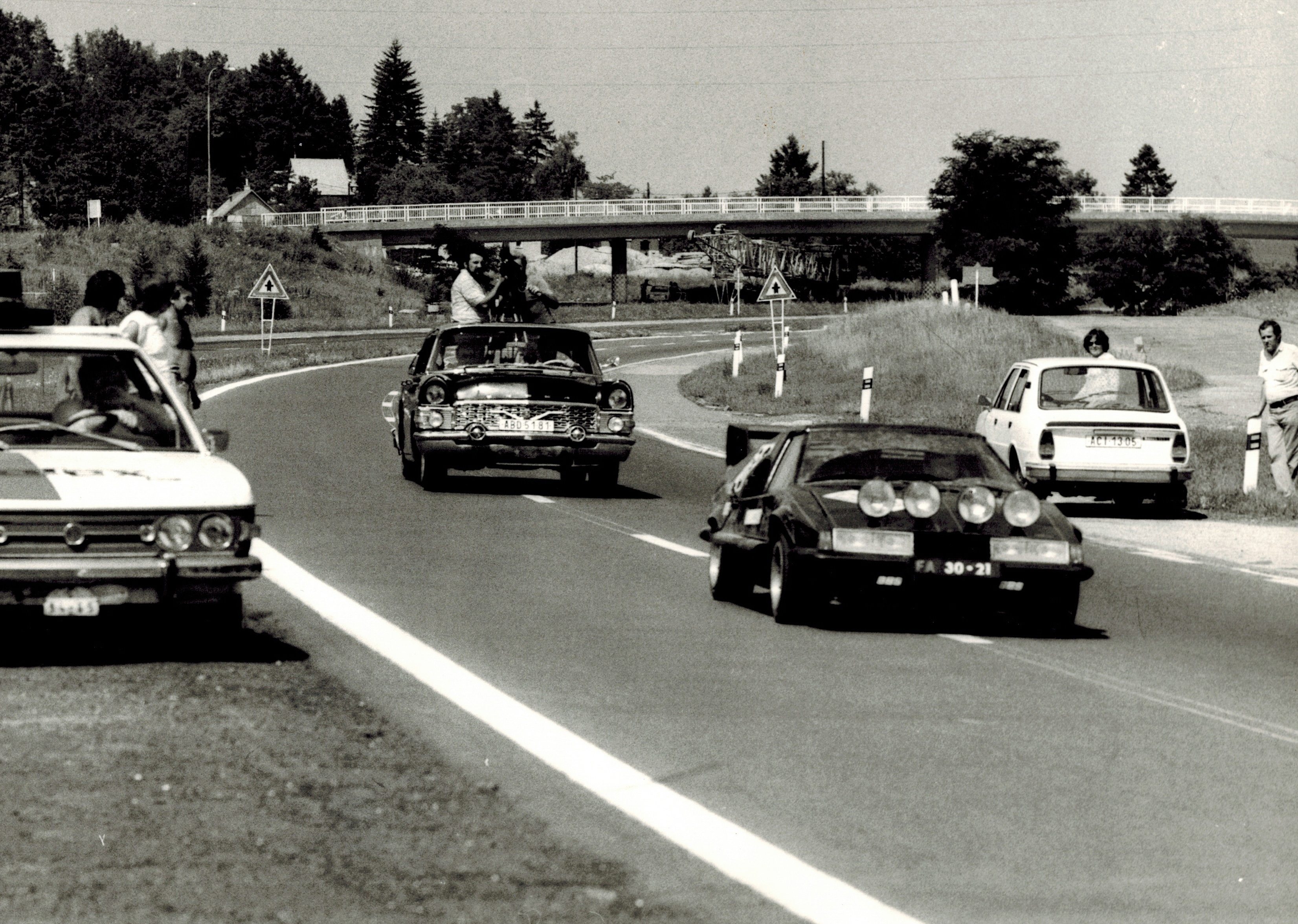 At the end of 1978, the Česana development centre was given an urgent task. After plans for joint car production with East Germany fell through, there was a pressing urgent need to come up with an innovation for the ŠKODA 105 and 120, whose sales were stagnating. With minimal resources, four reference prototypes had to be built with a maximum of existing components – all in the space of three months in early 1979. In the end, a white front-wheel-drive car with the official designation ŠKODA 742 P emerged as the best of the bunch. It was given the nickname “Swivel”, because the power unit, including the clutch, gearbox and distributor, had been “swivelled” 180° forward. The in-line four-cylinder engine thus ended up in front of the front axle instead of behind the rear axle. 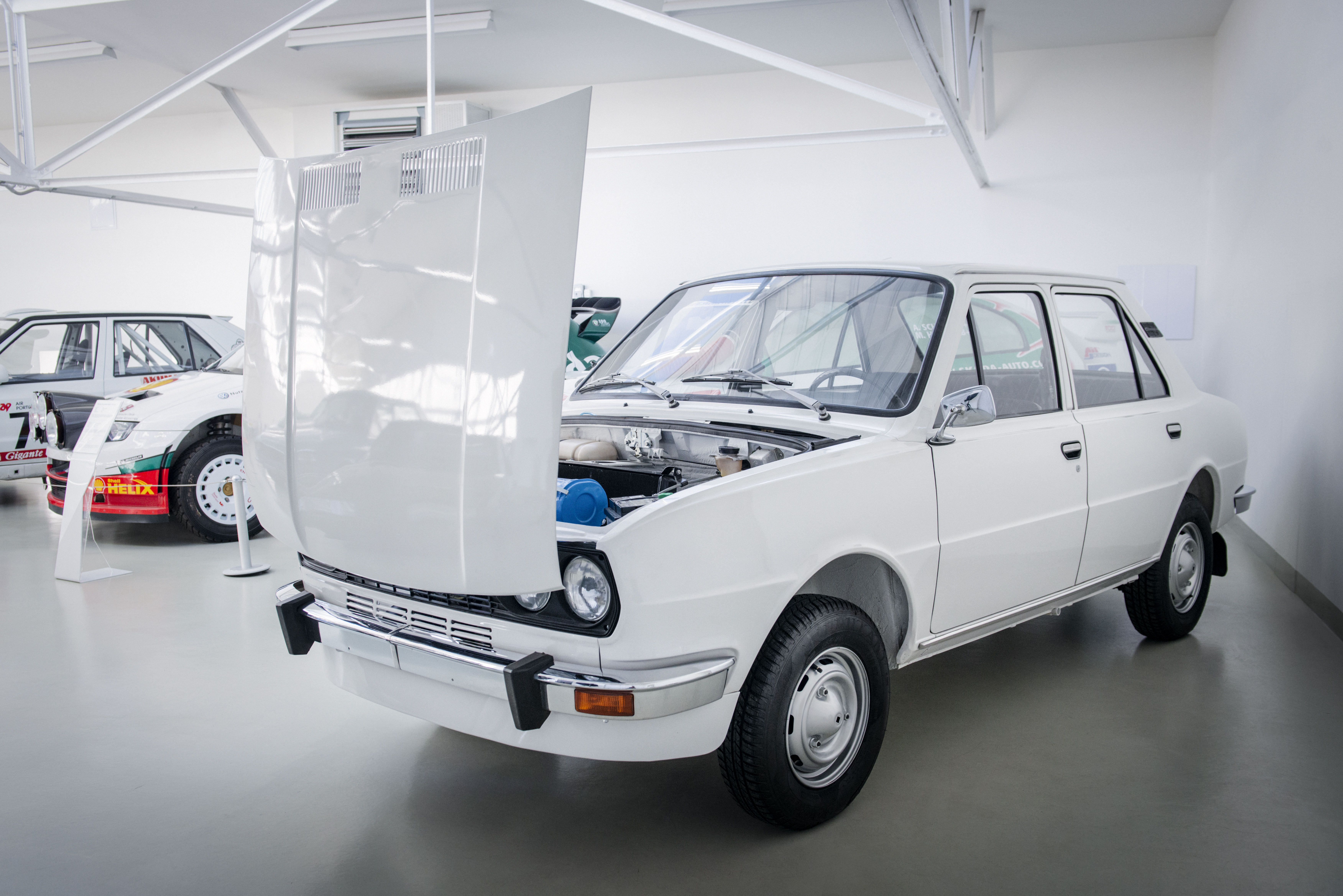 The space this freed up at the rear was utilised by an easy-access space for 400 litres of cargo. This was a dream for a nation of weekend-cottage owners and a very good alternative to the Wartburg, the East German car that was popular at the time but badly outdated. It was one of the concepts that were hastily prepared in the late 1970s by the prototype workshop of Stanislav Cinkl and former racing driver Miroslav Fousek. Fousek’s creativity and talent for improvisation earned him the nickname “Nobel” in the ŠKODA factory.

Stanislav Cinkl recalls how the prototypes were brought to Prague for presentation to the government. The then prime minister Lubomír Štrougal tried them out personally and rated the ŠKODA 742 P as the best of the lot. Of course, this concept’s prevalence in the west and the fact that the Soviet Union also favoured it played a big role. In addition to the Lada Samara, a small ZAZ Zaporozhets was being developed in the Soviet Union, and a prototype was flown to Prague. It was brought by lorry to a meeting where it was compared with the ŠKODA prototypes. Cinkl smiles at the memory of Štrougal wiping the sweat from his brow: he was evidently alarmed by the idea that we would have to produce an engine made almost entirely of expensive Elektron alloy under licence from the Soviet Union, and he was far from impressed by the workmanship on the ZAZ. Apparently, he got into the yellow Škoda Klasik, returned after half an hour, went for a couple more test drives, and finally pointed to the white ŠKODA 742 P. The “Swivel” concept was victorious, but the concept was only applied in a completely new car, the later FAVORIT model. The ŠKODA 742 P based on the obsolete Š 742 series served its purpose but never went into production. It later found its way into the ŠKODA Museum in Mladá Boleslav, where it is still on display in working order in the depository open to the public. 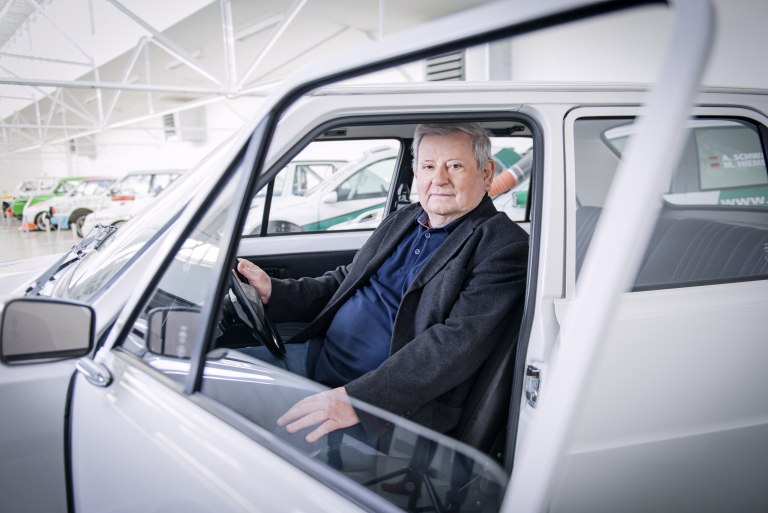 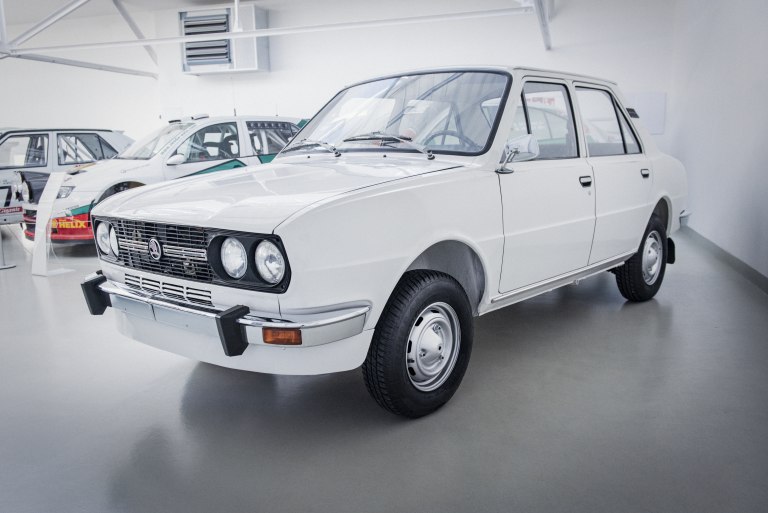 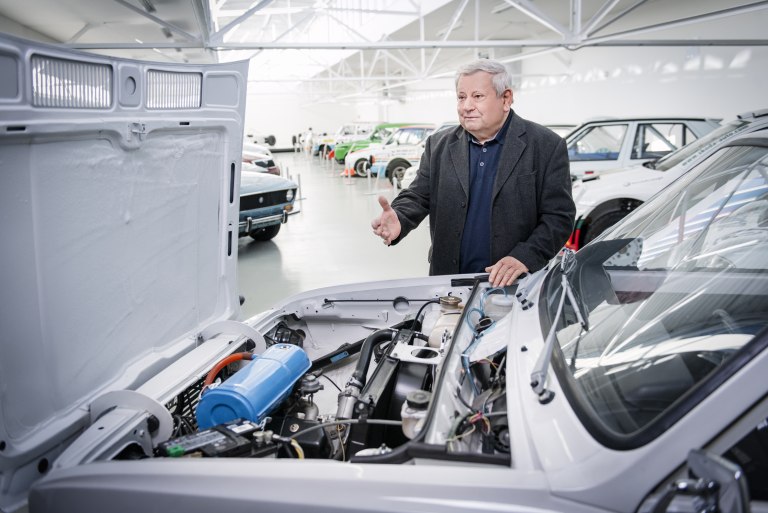 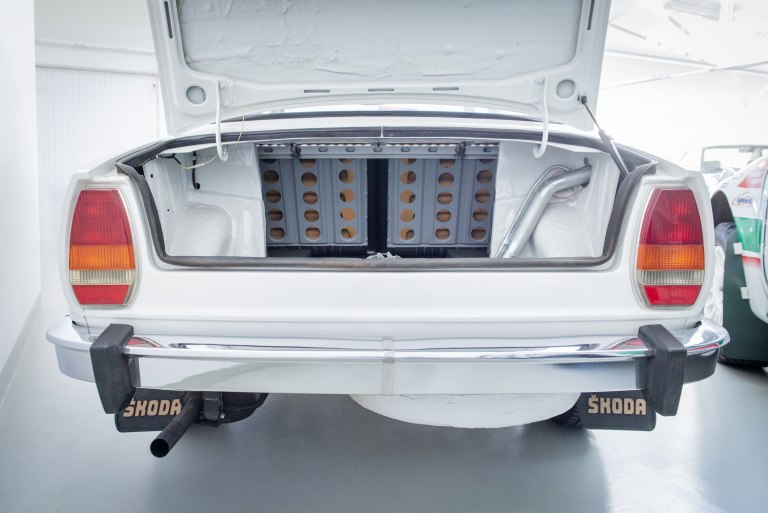 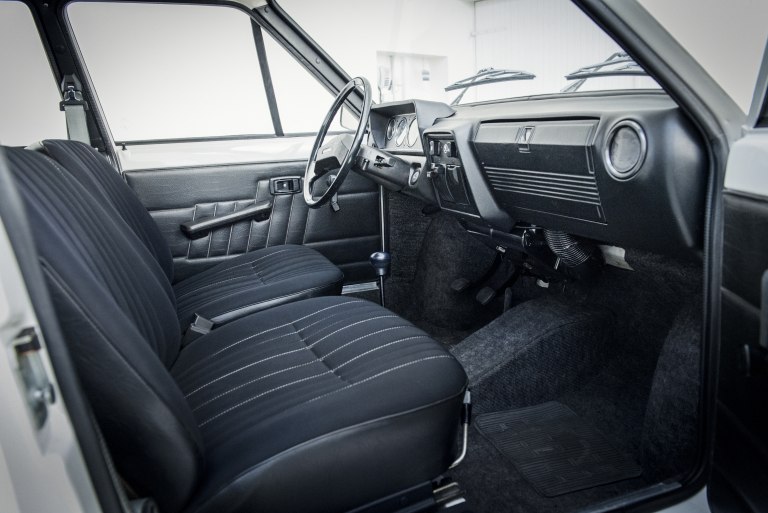 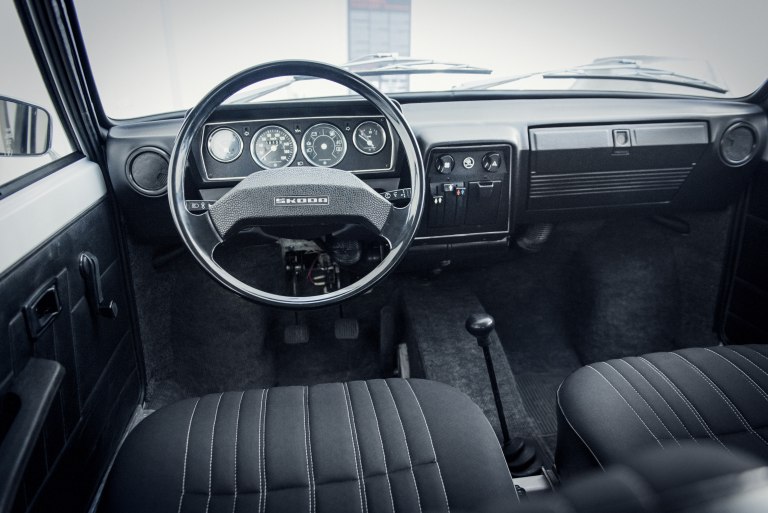 Born in 1944, he joined AZNP (the name given to ŠKODA during the early communist period) in Mladá Boleslav on 1 September 1958. He started in the building nicknamed Bronzák that had been built for the manufacture of diesel engines before the First World War. In the early 1950s the building housed the production of moulds for pressing the first all-metal ŠKODA car bodies. Today, this space is used by the ŠKODA Museum. Stanislav Cinkl is currently a very active senior citizen: he works closely with the ŠKODA Museum and has contributed to a number of specialist publications on the history of the brand. 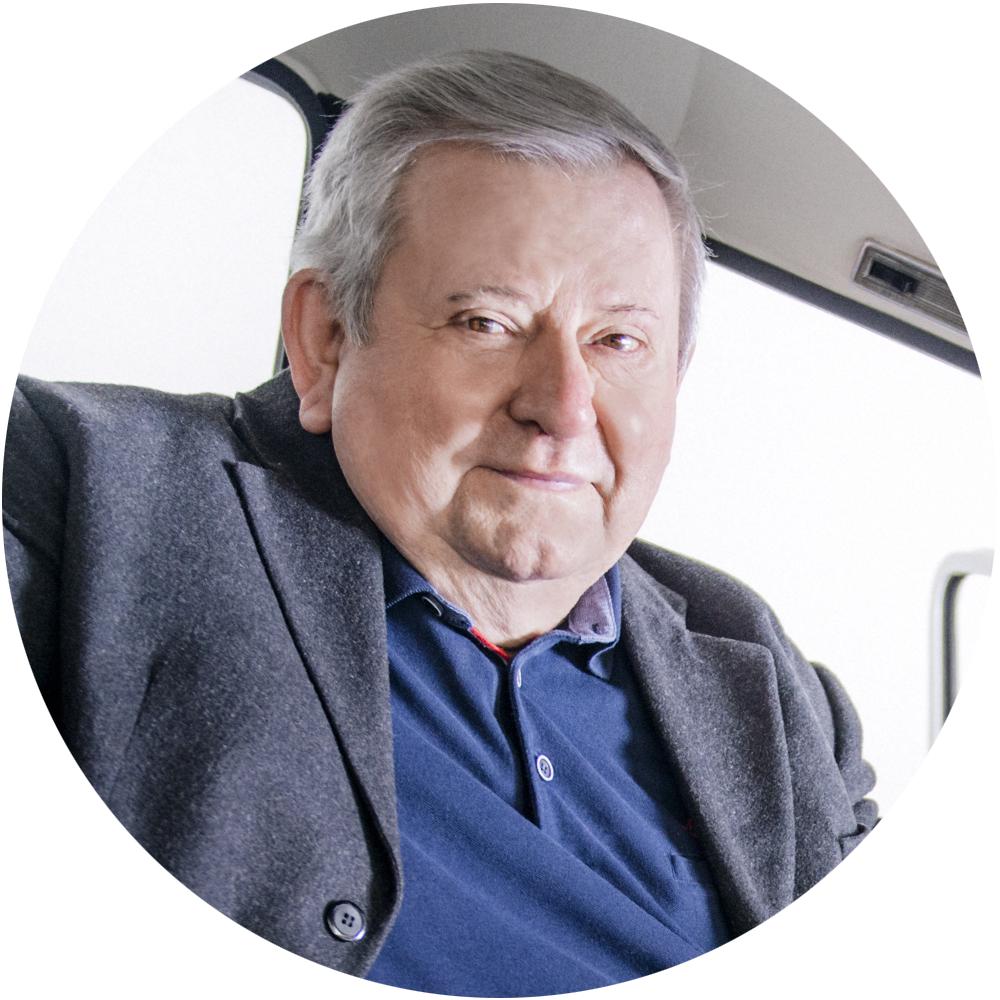 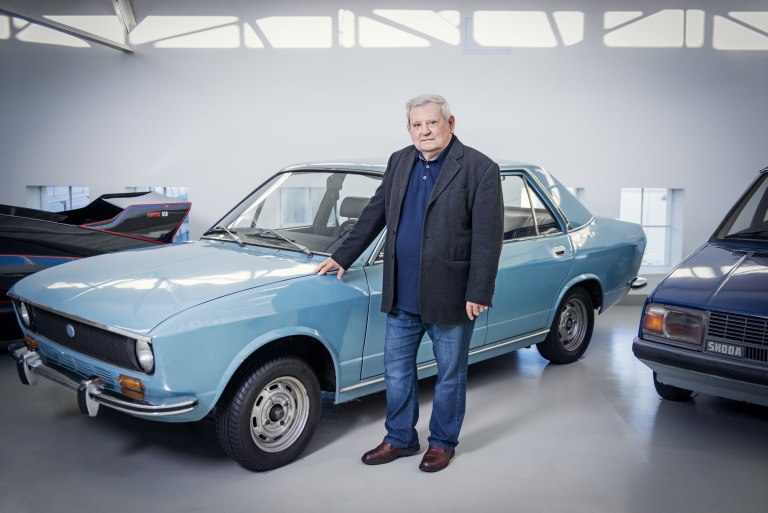 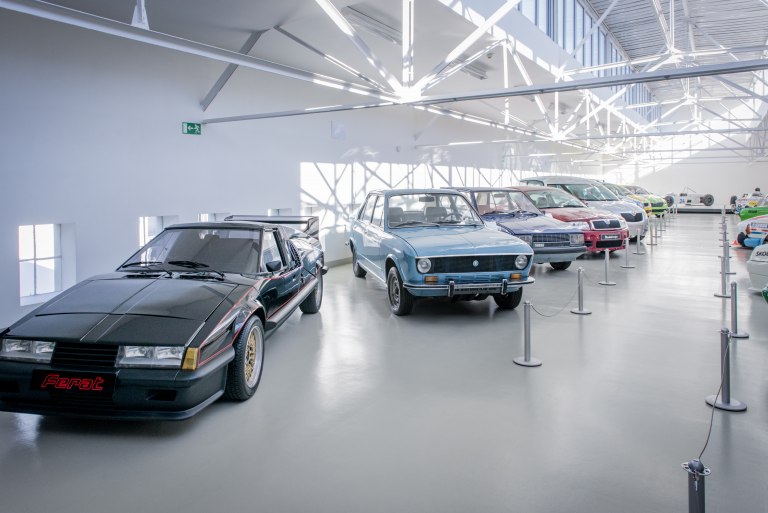 The FERAT and ŠKODA 720 ID in the ŠKODA Museum depository 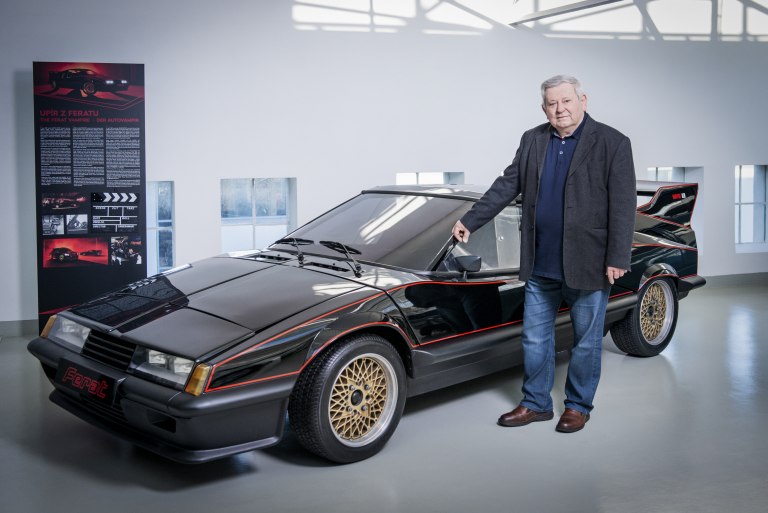 In the 1980s, Stanislav Cinkl modified the prototype of the ŠKODA 110 SUPER SPORT 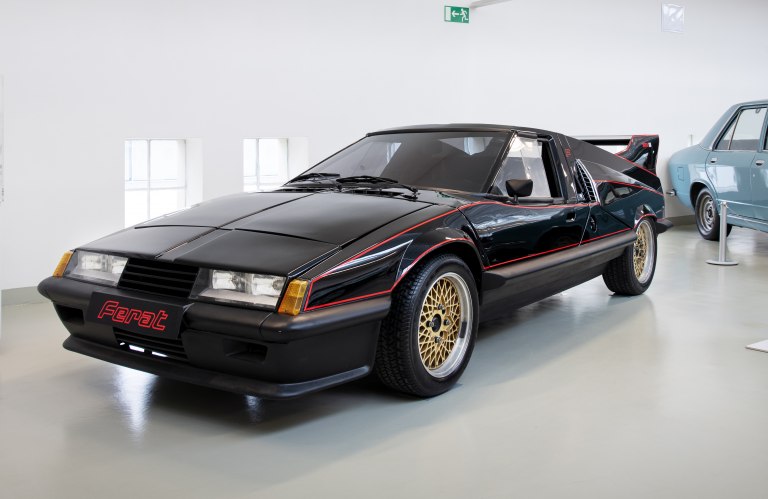 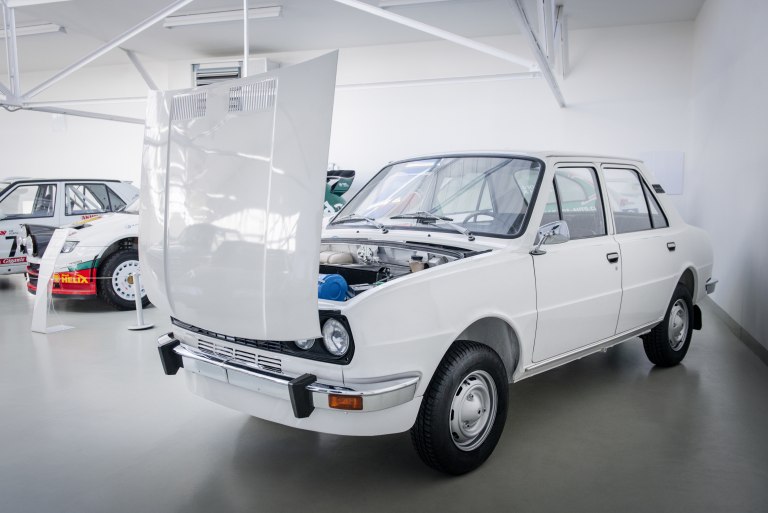