The new ŠKODA SLAVIA is the second car developed to meet the specific requirements of Indian customers. The traditional sedan has been given a dynamic design and a range of modern solutions. Take a look at the new model hitting the roads in India.

Connecting several worlds. That’s a good way to describe the new ŠKODA SLAVIA. The car with a traditional sedan body, i.e. with a stepped rear and a flip-up boot lid, is a response to the unceasing demand from Indian customers in this segment. At the same time, though, the SLAVIA has been endowed with modern and dynamic design featuring crystalline elements that make it a typical ŠKODA for the 21st century. 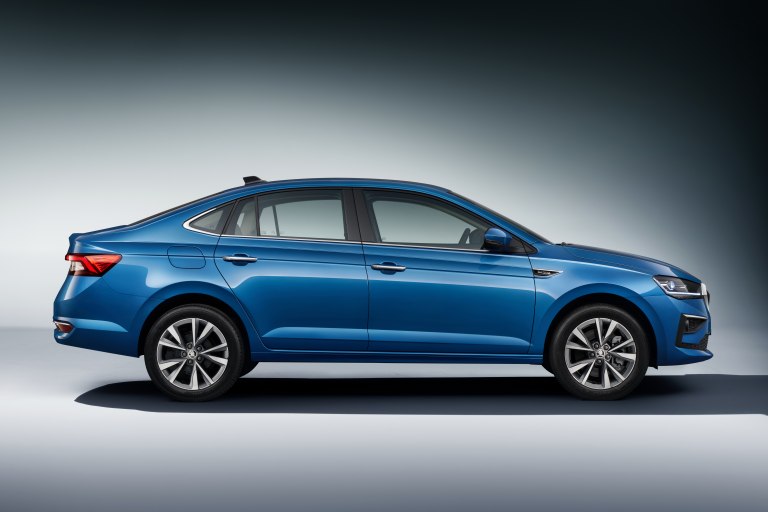 The SLAVIA name references the tradition of the Czech carmaker. Like the SLAVIA bicycles once were for the company’s founders Václav Laurin and Václav Klement, the name is also a symbol of a new beginning for ŠKODA, this time on the Indian market. It also symbolises the links between Indo-European tradition and Czech and Indian culture.

“Following the successful launch of the KUSHAQ, we are now entering another popular segment with our brand-new saloon. The SLAVIA is perfectly tailored to the needs of our customers in India and is built with a localisation level of up to 95%. We are confident that both the KUSHAQ and the SLAVIA will allow us to leverage the full potential in this promising, growing market,” explains ŠKODA CEO Thomas Schäfer.

While SUV models have quickly gained popularity in India, just like they have everywhere else, the sedan segment is traditionally strong on the local market. Customers are particularly keen on compact models that provide ample space for family and luggage while offering a high level of comfort. And the SLAVIA is exactly that. “The successful start of the INDIA 2.0 project with the KUSHAQ truly highlights what can be achieved with global collaboration here in India. In addition to the increasingly sought-after SUVs, the premium saloon segment offers tremendous potential, and it’s a territory that we have made our own. The sophisticated SLAVIA stands for prestige and style. It also represents a new growth area for ŠKODA AUTO. With its sophistication, capable engines and numerous Simply Clever features, the SLAVIA will appeal to discerning customers in India, and it will also be appreciated in markets around the world. We are confident that the ŠKODA SLAVIA will continue the benchmarks set by the OCTAVIA and SUPERB, and will help us to further strengthen our dominance in the segment,” Gurpratap Boparai, Managing Director of ŠKODA AUTO Volkswagen India Private Limited, introduces the car. 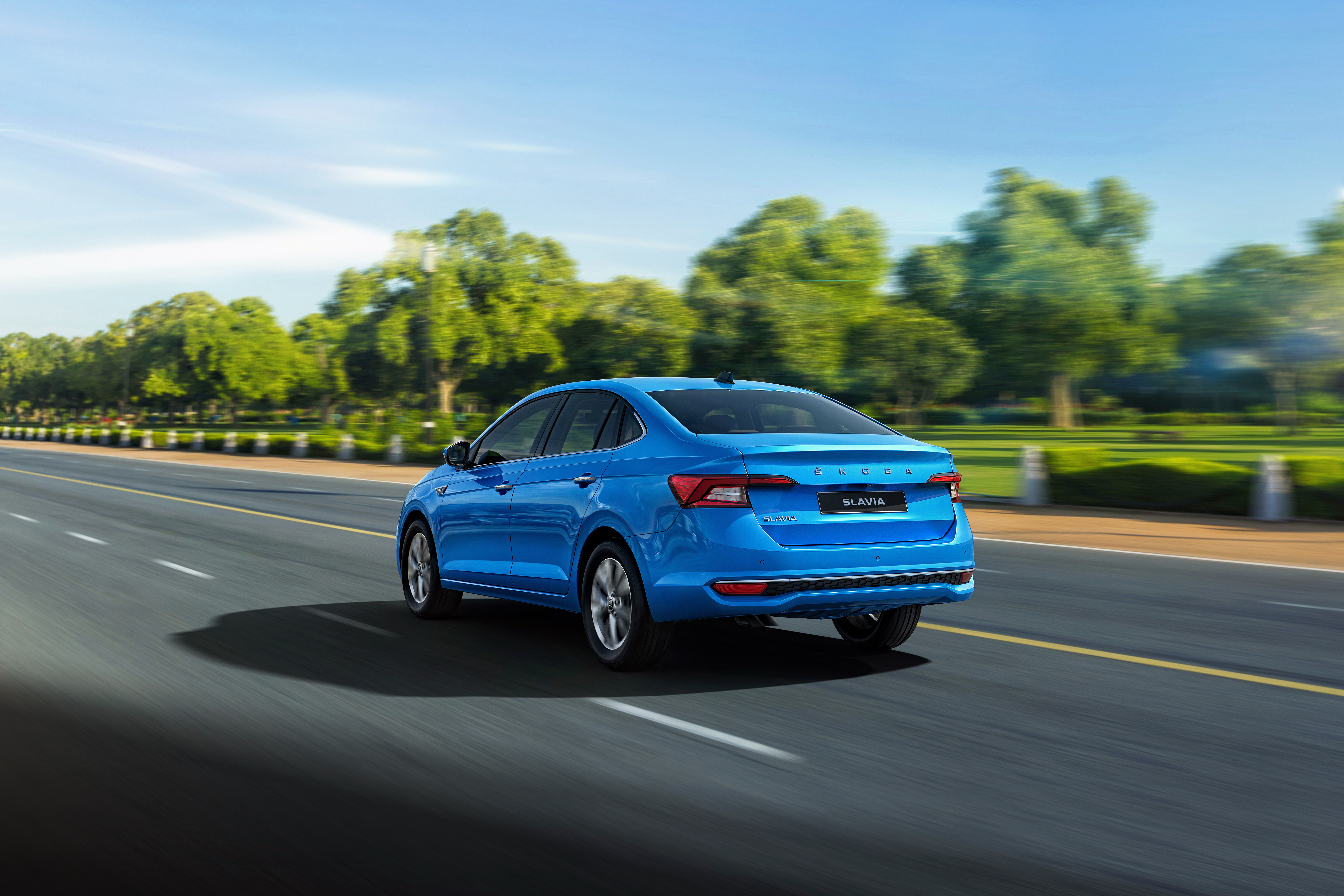 While the KUSHAQ SUV attracts customers with its more rugged looks, the SLAVIA offers more slender sporty lines. The 4,541-millimetre-long sedan sits on a 2,651-millimetre wheelbase chassis and the car’s height is 1,487 millimetres. These dimensions give the car balanced proportions, and the SLAVIA resembles a coupé when viewed from the side. But it remains extremely spacious: the luggage compartment can hold up to 521 litres of cargo. 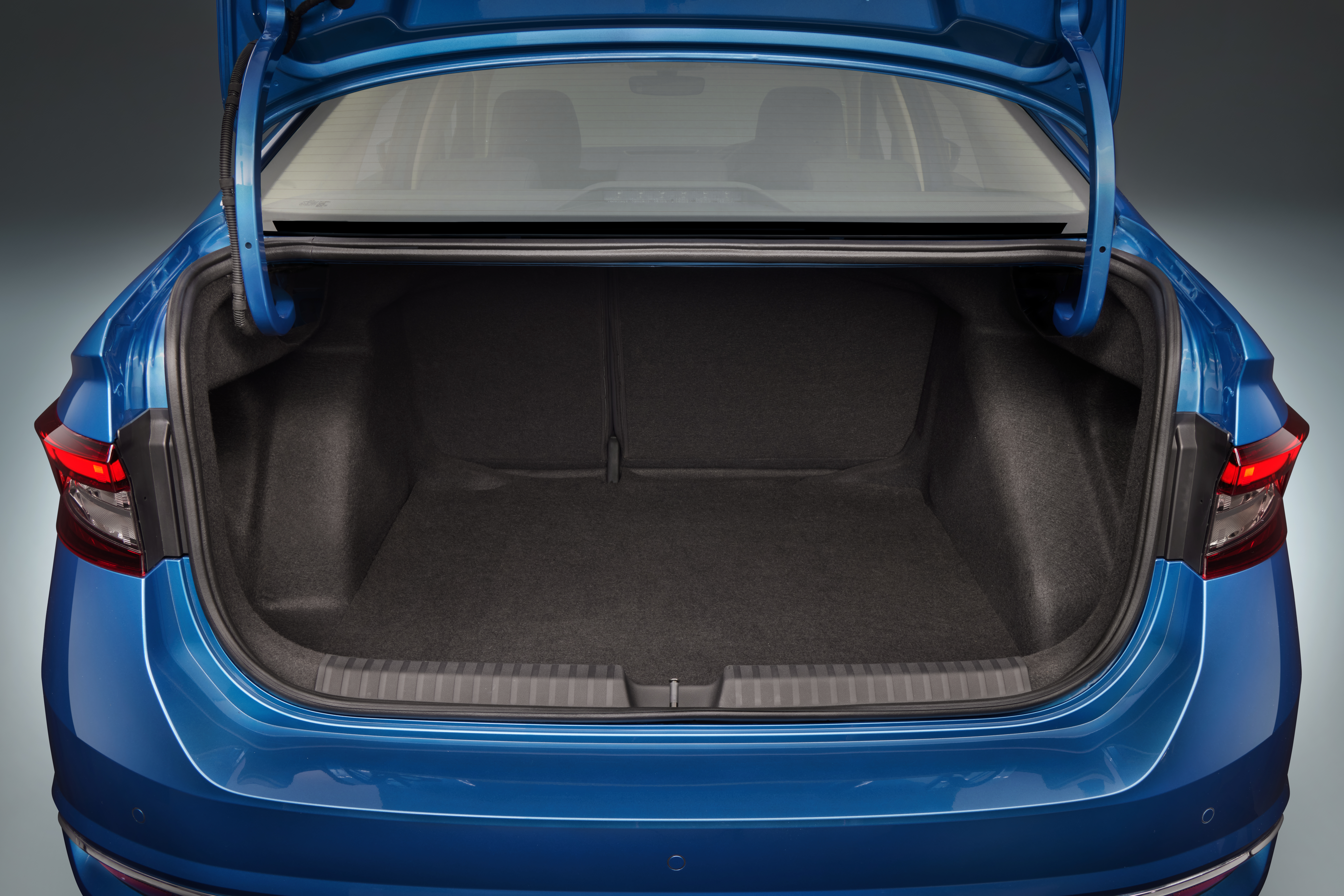 The design features typical ŠKODA crystalline elements, which is why the SLAVIA boasts LED headlights, for example. “The new SLAVIA is a true ŠKODA, characterised by our emotive design language. Alongside the powerful and striking KUSHAQ, our brand-new saloon brings traditional elegance to India’s A0 segment. Its crystalline elements are inspired by the brand’s Czech heritage while distinctive visual highlights, such as the chrome applications on the door handles, add a unique touch to its appearance,” says ŠKODA AUTO Chief Designer Oliver Stefani.

The LED technology is used as standard in the daytime running lights, with the LED modules at the rear forming part of the headlights housed in the bodywork as standard.  In the top-end specification, a hexagonal LED module produces the low beam and high beam, while the daytime running lights are provided by a striking, sharply defined L-shaped LED strip and LED elements in the part of the taillights also located in the boot lid. It is in these versions that the crystalline design of the SLAVIA stands out the most. At the front, its main elements are the hexagonal radiator grille and the headlights with their flat design, while the rear light elements form the typical C-shaped signature.

In its interior, too, the SLAVIA remains a typical representative of the Czech car brand. The distinctive horizontal lines emphasise the interior space, while the large free-standing infotainment display (up to 10 inches diagonal) leaves no doubt about the car’s modern tech credentials. These two elements converge at the point of the display, and the horizontal line that follows the shape of the bonnet ridge is a convenient place for resting the hand beneath the display, making it easier to operate the infotainment system. The SLAVIA also has circular air-conditioning outlets. 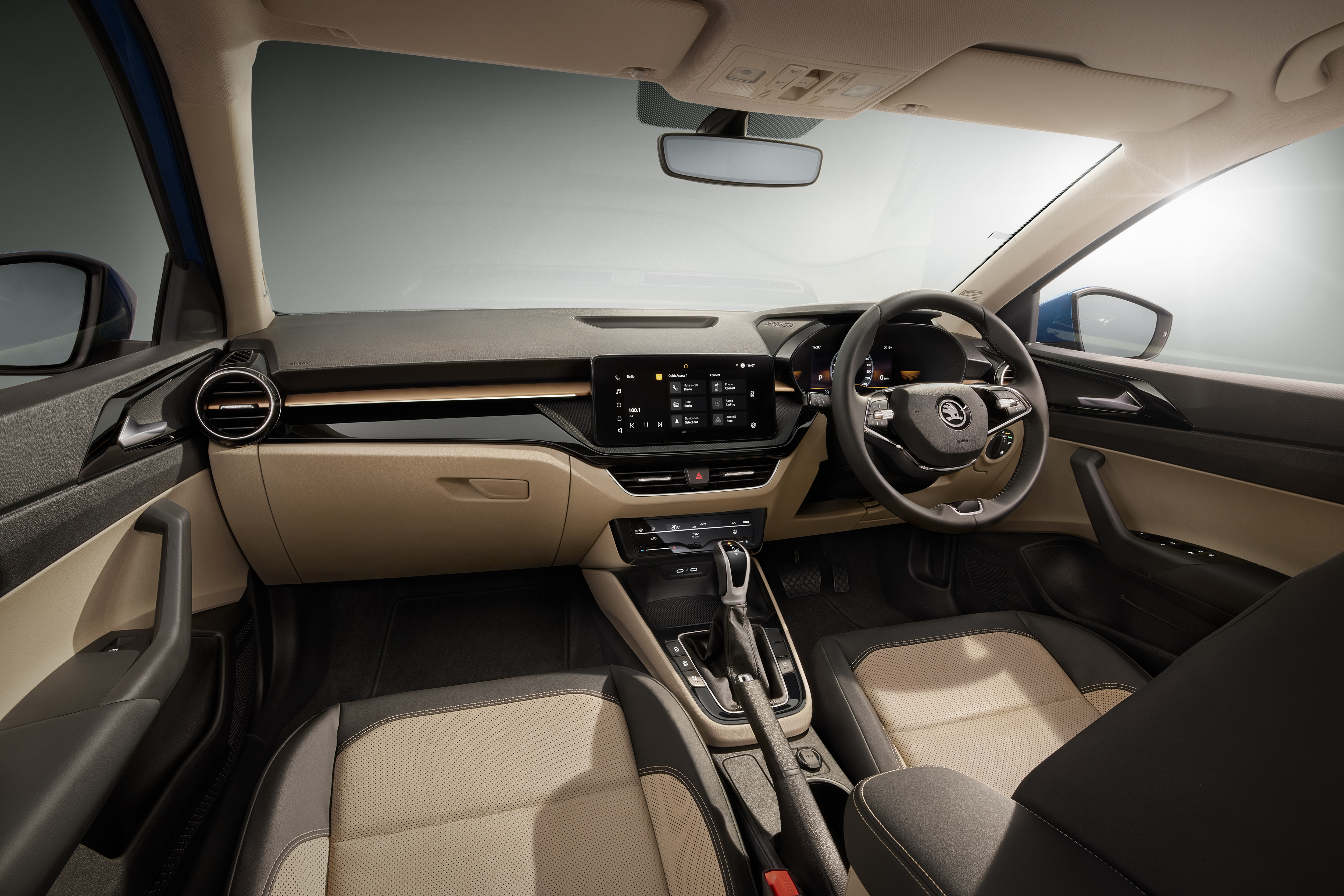 It goes without saying that the SLAVIA comes with a powerful air-conditioning system as standard, with Climatronic air-conditioning with a touch-sensitive control panel and extra ventilation outlets at the rear of the car available on more expensive versions. The SLAVIA can also be fitted with leather upholstered and ventilated front seats. Other options customers can order include an electrically operated sunroof, an automatically dimmable interior rear-view mirror or KESSY keyless unlocking. ŠKODA Connect online services are also available in higher trim versions. It goes without saying that there is mobile phone connection via Bluetooth and USB, as well as the SmartLink function for accessing the phone’s functions on the dashboard display. There is also the option of wireless charging of mobile phones.

Of course, the car is crammed full of other practical and Simply Clever features. The rear seats recline and split 60:40, and the cup holder has a specially designed bottom so that drink bottles can be easily opened with one hand. Rubber straps in the door compartments keep items securely in place. Reflectors in the doors warn other road users when the doors are opened. And like the KUSHAQ, the SLAVIA comes with a multi-purpose compartment on the dashboard as standard. 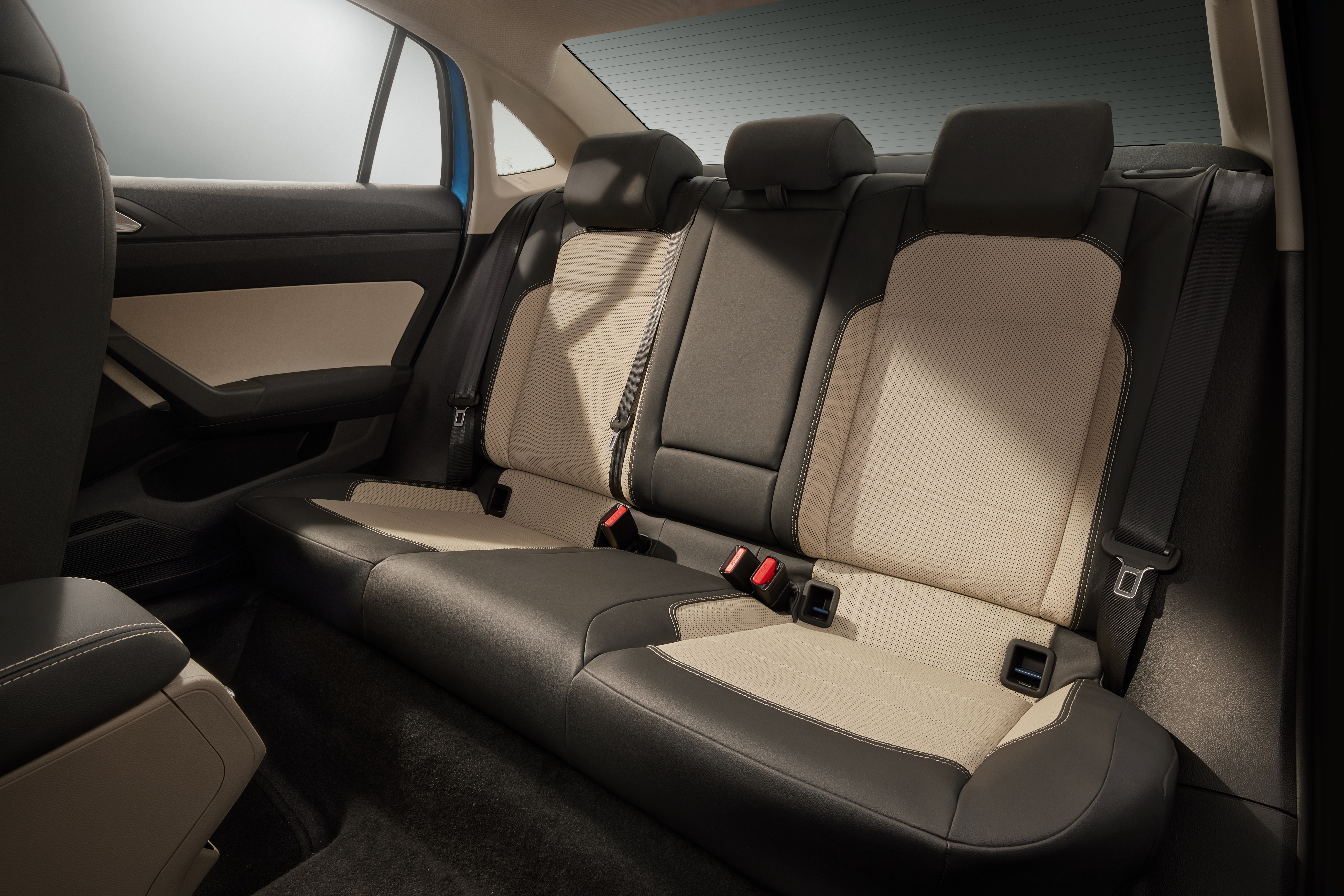 The SLAVIA places a strong emphasis on safety and can be equipped with up to six airbags or the “multi-collision” braking system. The rear seats are fitted with ISOFIX anchors for attaching child seats. ŠKODA supplies the ESC stabilisation system as standard, and the XDS+ electronic differential helps improve front axle traction. 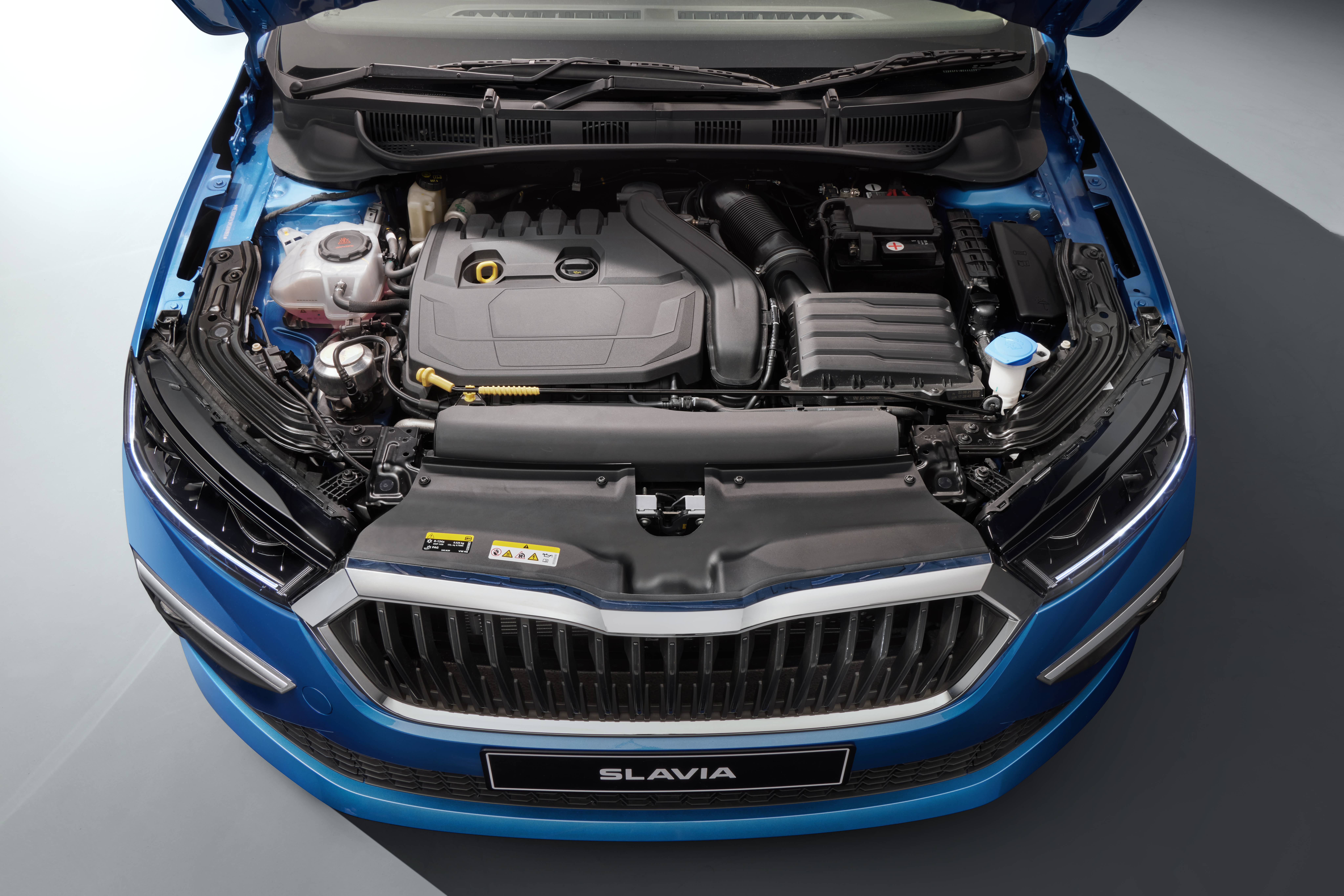 Take a look at the premiere of the SLAVIA model 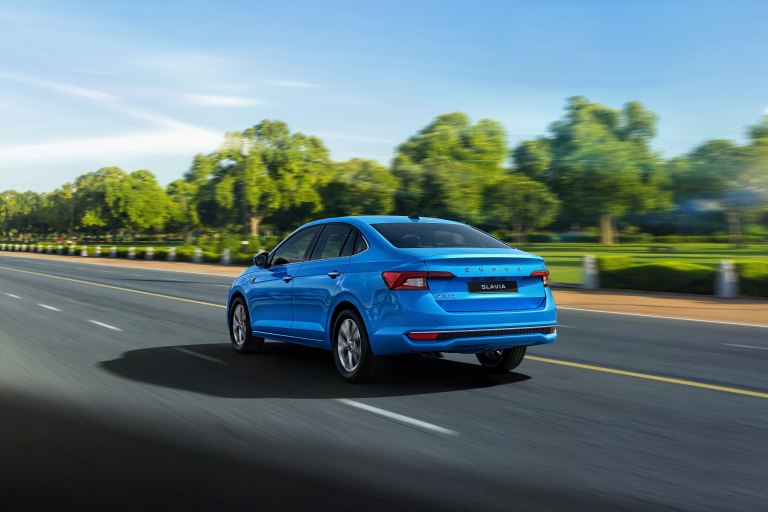 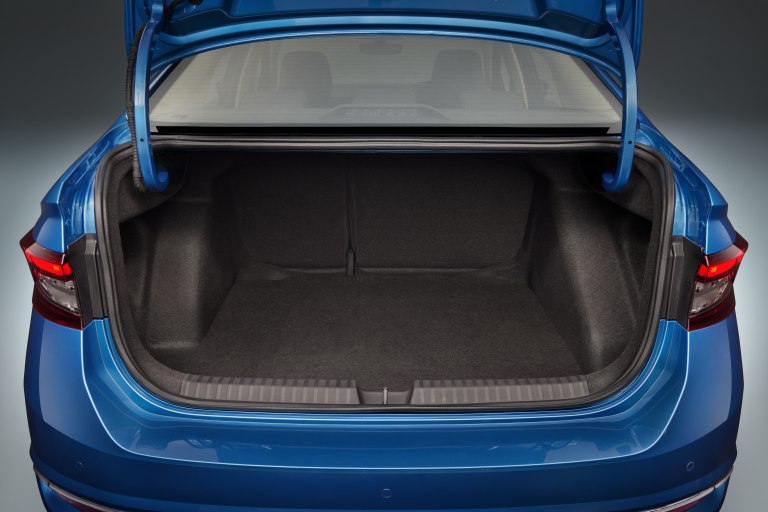 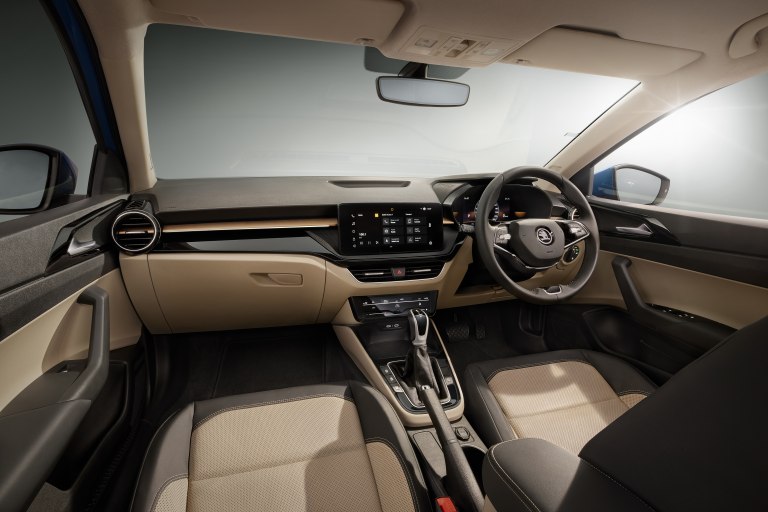 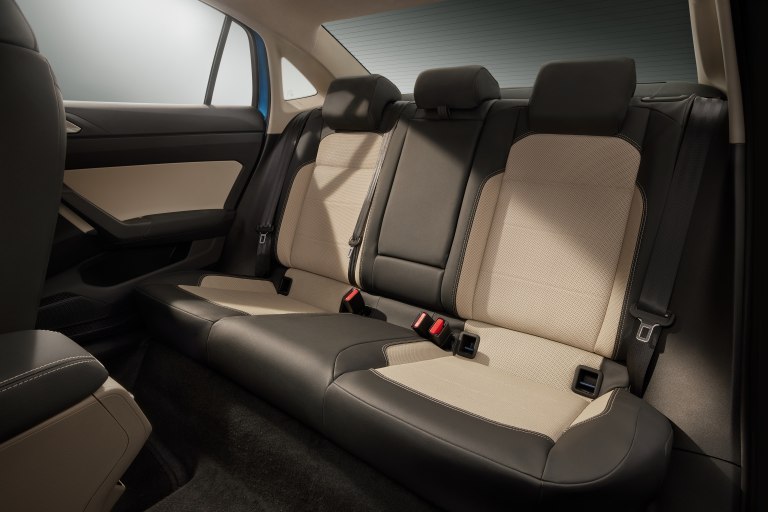 Rear seats of the ŠKODA SLAVIA 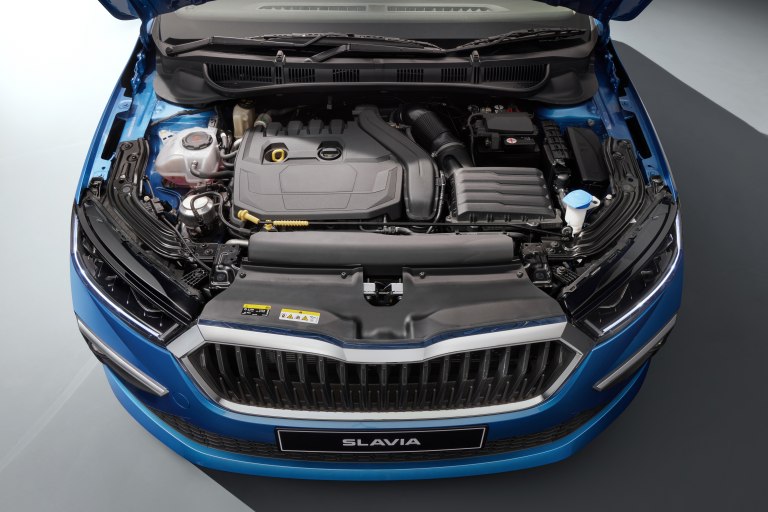