Medical clowns, who cheer up children in difficult situations, can now get around more conveniently. And ecologically. The appearance of two new ŠKODA ENYAQ COUPÉ RS iV cars for them was designed by children themselves.

This year celebrated two decades of the partnership between ŠKODA and the non-profit organisation Medical Clown with a competition for young artists. Children up to the age of 15 were given the chance to design the appearance of two ŠKODA ENYAQ COUPÉ RS iV cars used by medical clowns.

Twenty entries were short-listed, with one winner chosen by a public vote and the other by a jury of experts. “Children’s eyes see the world differently from us adults and it was really hard to choose a winner. Painting is one of the things that children love to do, and in our visits to hospital rooms we see what amazing creations they can come up with,” said Alena Seoud, fundraising and marketing director at Medical Clown and one of the members of the expert jury.

The jury’s choice was the work of Anna Isabel Baslerová.

“What all the finalists have in common is that they are all designs that make it clear that this is a Medical Clown car, and they certainly express the hope they bring to hospitals - and hopefully happy endings to stays in hospital!” said Kateřina Vránová from ŠKODA’s design team, another jury member. She was impressed, for example, by the design of the sky-blue car painted with cheerful clown faces.

“It’s colourful, childlike but not childish. It’s like spilling things out of a clown’s bag of tricks, like a child sticking on stickers,” said Katerina Slámová Kubešová, director of the Medical Clown organisation. This design, created by 14-year-old Anna Isabel Baslerová, was the jury’s pick, thanks in part to the vote received from Michal Kadera, ŠKODA’s head of external relations. “It’s just wonderfully playful,” Kadera said, explaining his choice.

The public vote was won by a yellow car, which, in addition to the Medical Clown sign, features a monkey hanging by its tail from a tree. The author is 14-year-old Marie Glaubová.

Comparison of the final outcomes of the designs by Anna Isabel Baslerová and Marie Gaubová.

The twenty finalists all won a prize – a gift pack worth CZK 1,000. The winners whose designs adorned the cars presented to the medical clowns won an Apple iPad, including an Apple Pencil drawing pen.

Pros with a red nose

The jury’s choice was the work of Anna Isabel Baslerová.

The final outcome of the design by Anna Isabel Baslerová 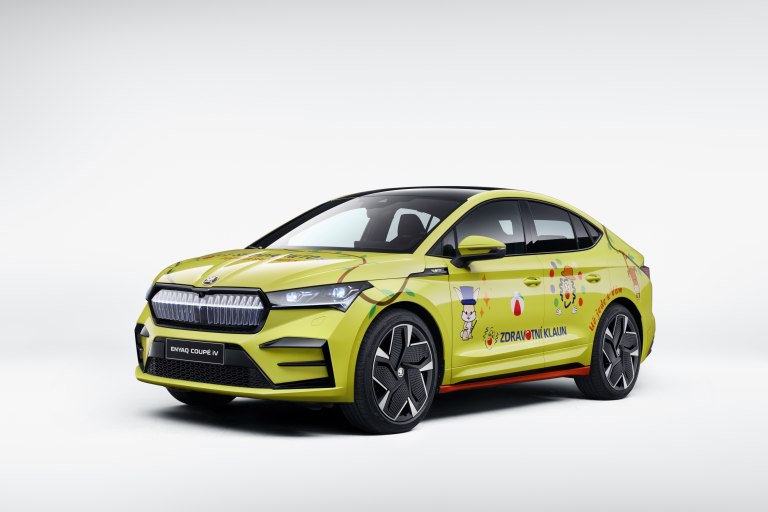 The final outcome of the designs by Marie Gaubová