A desert wolf test-drives the AFRIQ: Let it race!

Light, agile, promising. That’s how experienced Dakar rally driver Ondřej Klymčiw praised the student dream car called the ŠKODA AFRIQ after a test drive. Find out how he put it through its paces and why he praised its automatic transmission.

Ondřej Klymčiw has taken part in the famous Dakar rally several times on a motorcycle, and also behind the wheel of a ŠKODA 130 LR. His opinion of this year’s ŠKODA AFRIQ student dream car is that it has a lot of promise.

“It’s not a fully-fledged rally car, of course, but as a student project the car is very interesting. It would be worth giving it a chance in one of the smaller competitions where it could show what it can do over two or three days. Maybe a less demanding cross-country race in Spain,” says Klymčiw. 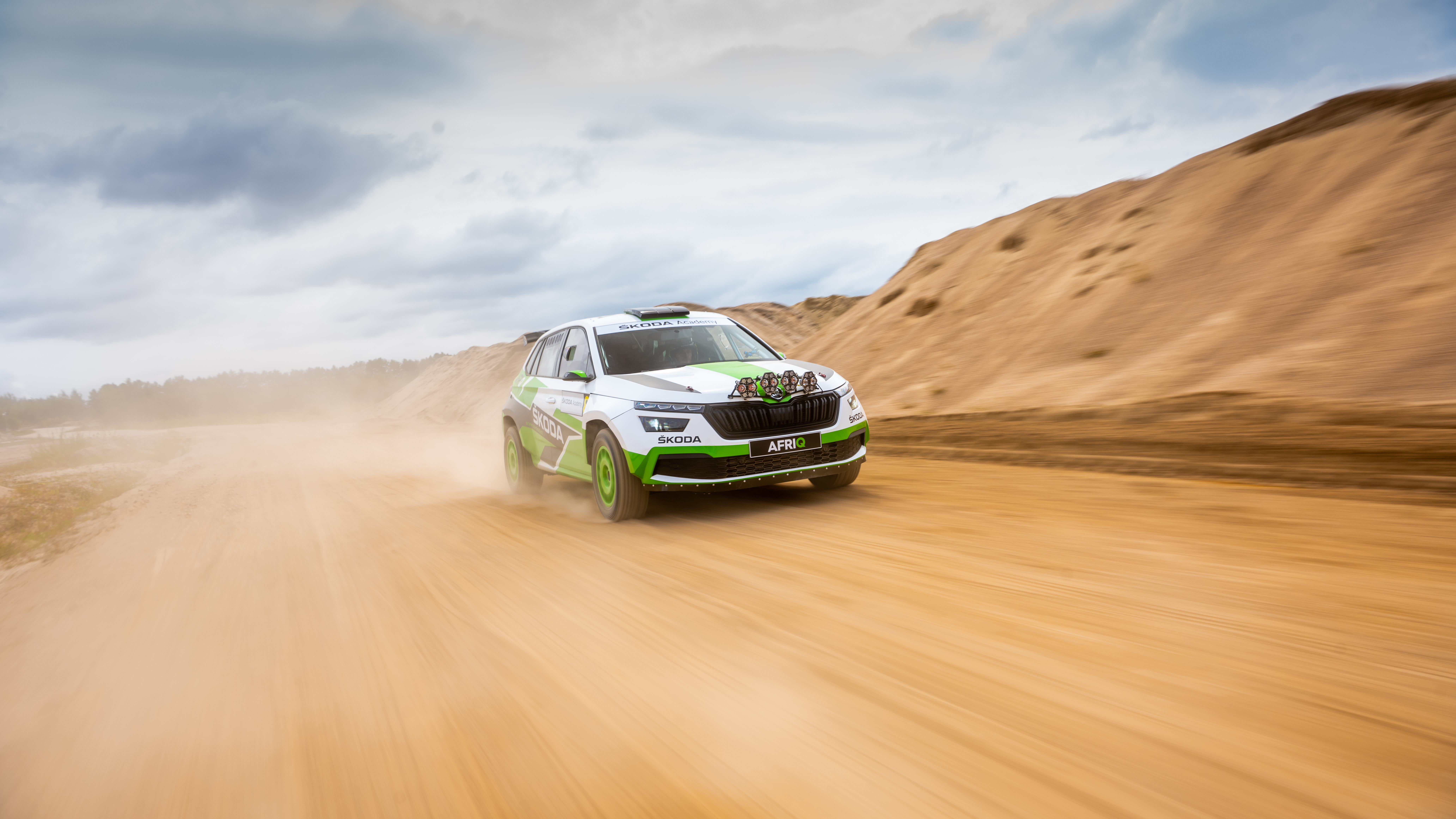 This is the eighth year that students at the ŠKODA Academy have designed their dream car. But it was the first time they combined two production cars. Underneath the modified body of the KAMIQ urban SUV lies the powertrain used in the OCTAVIA, including the 4×4 all-wheel drive system, the 2.0 TSI (140 kW) engine and the DSG automatic transmission, which was praised by the experienced rally driver.

“I found the AFRIQ very interesting. The automatic gearbox is great. The automatic helps a lot when starting in the sand by eliminating the human factor - after all, drivers will work the clutch pedal a little differently every time, but the automatic always works the same way. It’s all about the throttle control, how much and how fast you apply it. Thanks to the automatic transmission, the power delivered to the wheels can be dosed precisely and gently, which is very important when starting on a loose surface: you have to get it moving slowly and, above all, smoothly,” the Dakar pro says. “If it was up to me, I’d also like the opportunity to change gear manually with a gear stick under the steering wheel, because when you want to change gear manually you don’t have time to take your hands off the wheel,” he adds, suggesting one improvement. 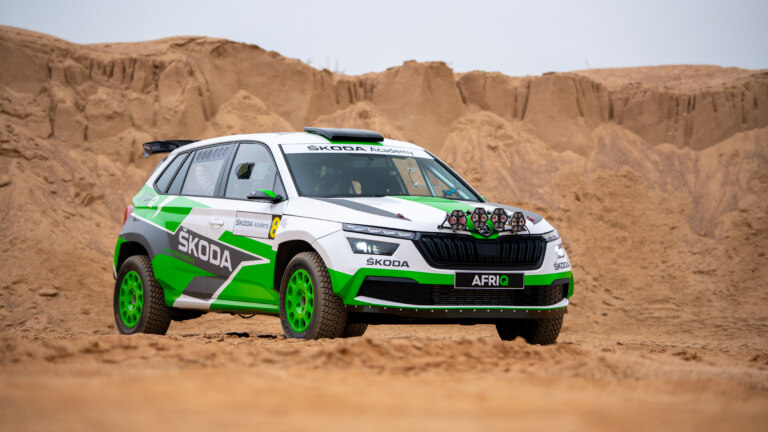 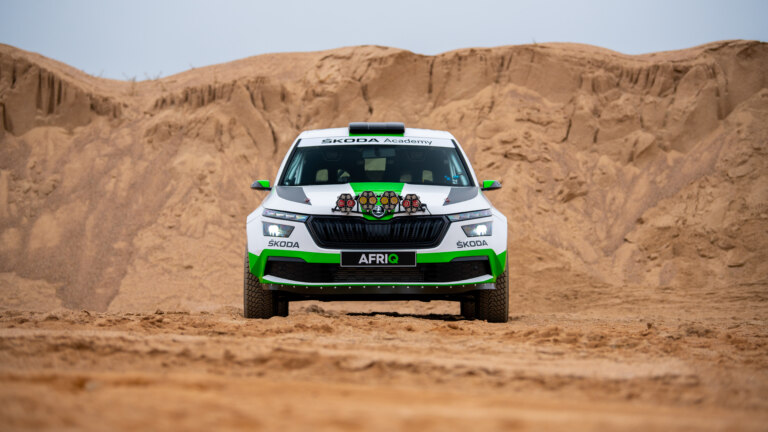 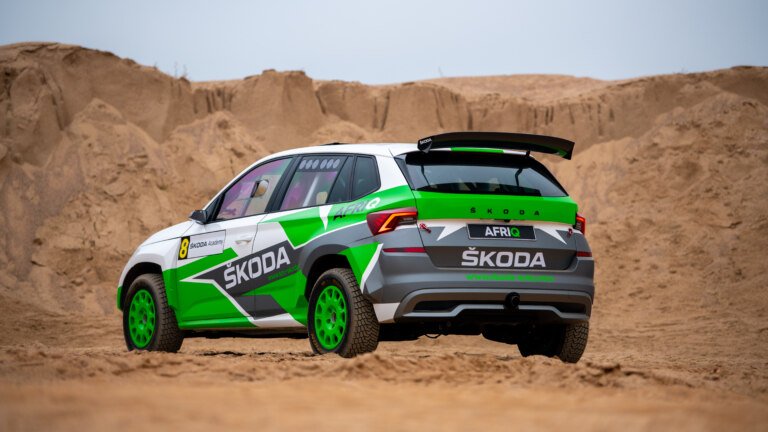 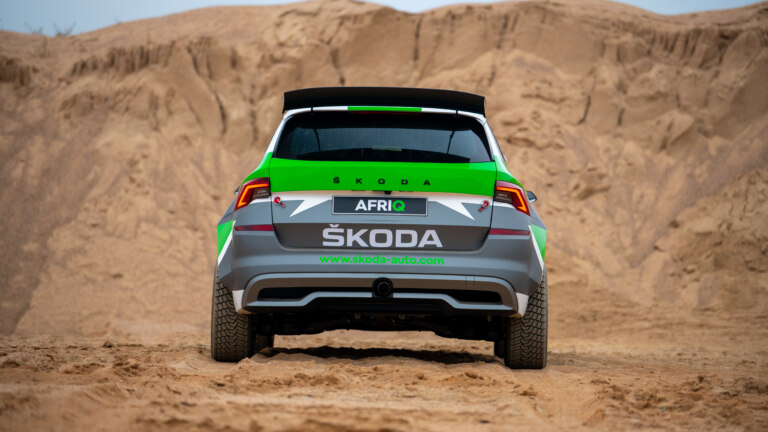 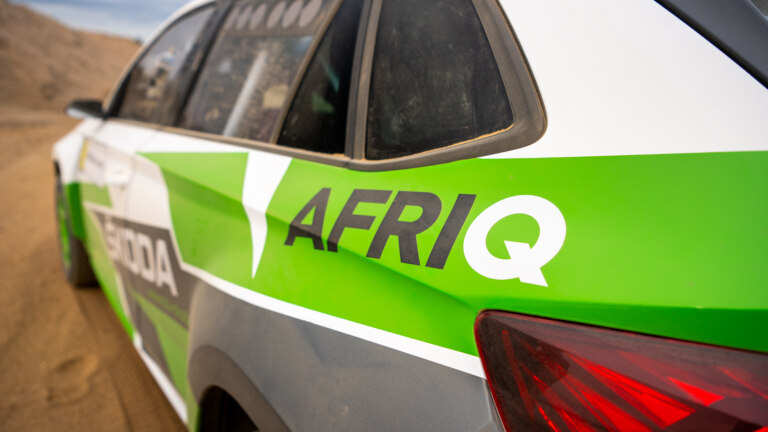 Once the car is in motion, the excellent acceleration comes into its own, benefiting from the combination of a strong engine and a lightweight car. “It’s great that the engine is supercharged, it’s a good decision. My ŠKODA’s naturally aerated engine delivers 155 horsepower, while the AFRIQ has about 180, so the performance is similar. My car is lighter, but the turbo makes the AFRIQ much nicer to drive, partly because it has solid torque available even at low revs. And on top of that there’s the four-wheel drive. A very enjoyable drive,” Klymčiw sums up his first impressions. 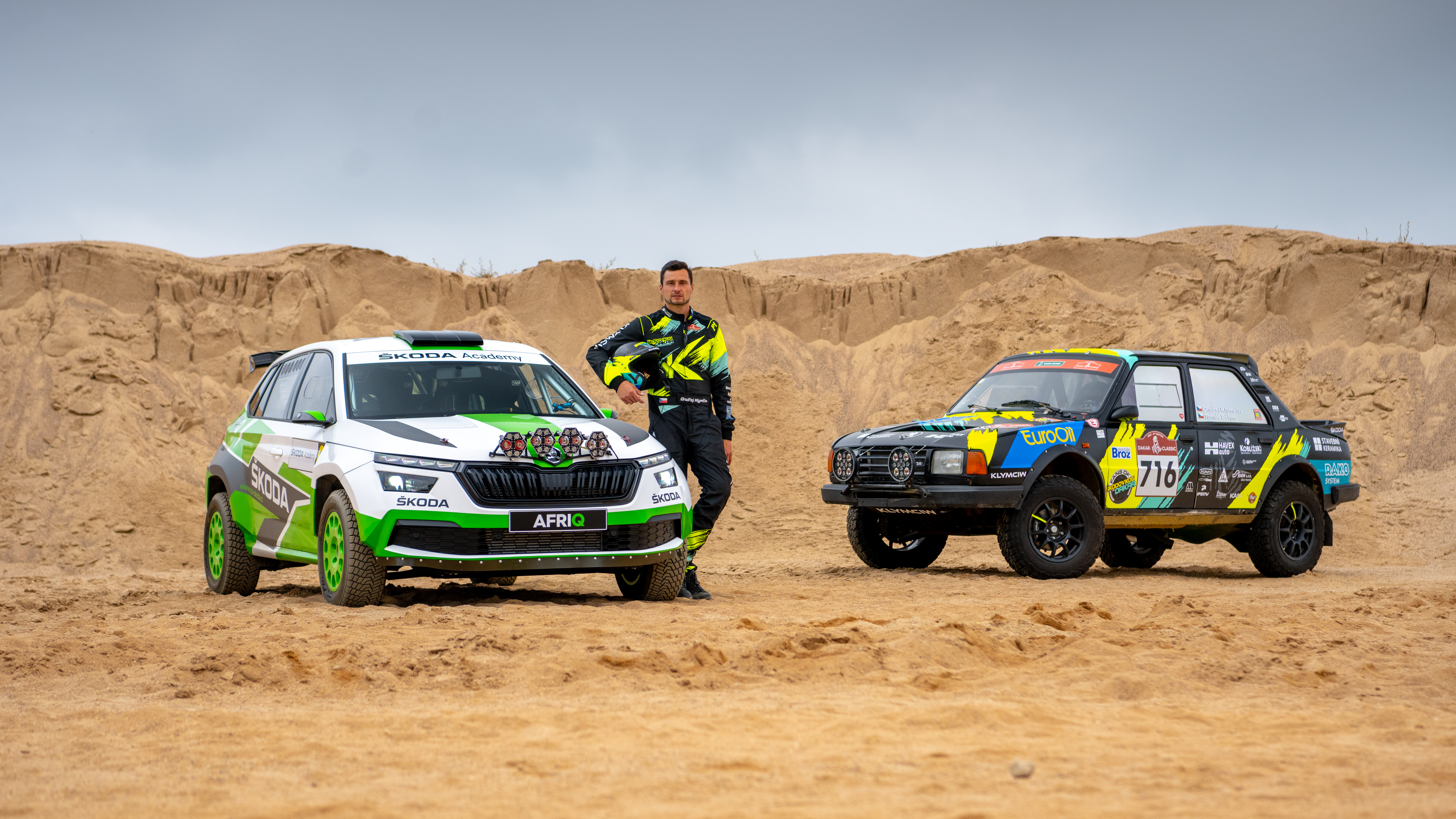 Ondřej Klymčiw with the ŠKOKDA AFRIQ and the ŠKODA 130 LR he drove on the famous Dakar rally.

Another thing that impressed the desert racer about the student car is its compact dimensions with minimal front and rear overhang. “This makes the car surprisingly playful, agile and nimble. Ideal for winding mountain tracks. Driving the AFRIQ on a world championship race in Andalusia, for example... its lightness and agility would be a great advantage there!”

And even though his profession means he can’t help strive for the most robust construction and the lowest possible weight, Klymčiw also likes one exceedingly interesting technical feature: “A water generator that can collect liquid from the humidity in the air is certainly an intriguing idea, and who knows, maybe it’s even a vision for the future. Although my experience so far has been that there is water everywhere in the desert where we race. We know exactly where the refuelling stations are and we can refill our drinking water there.” 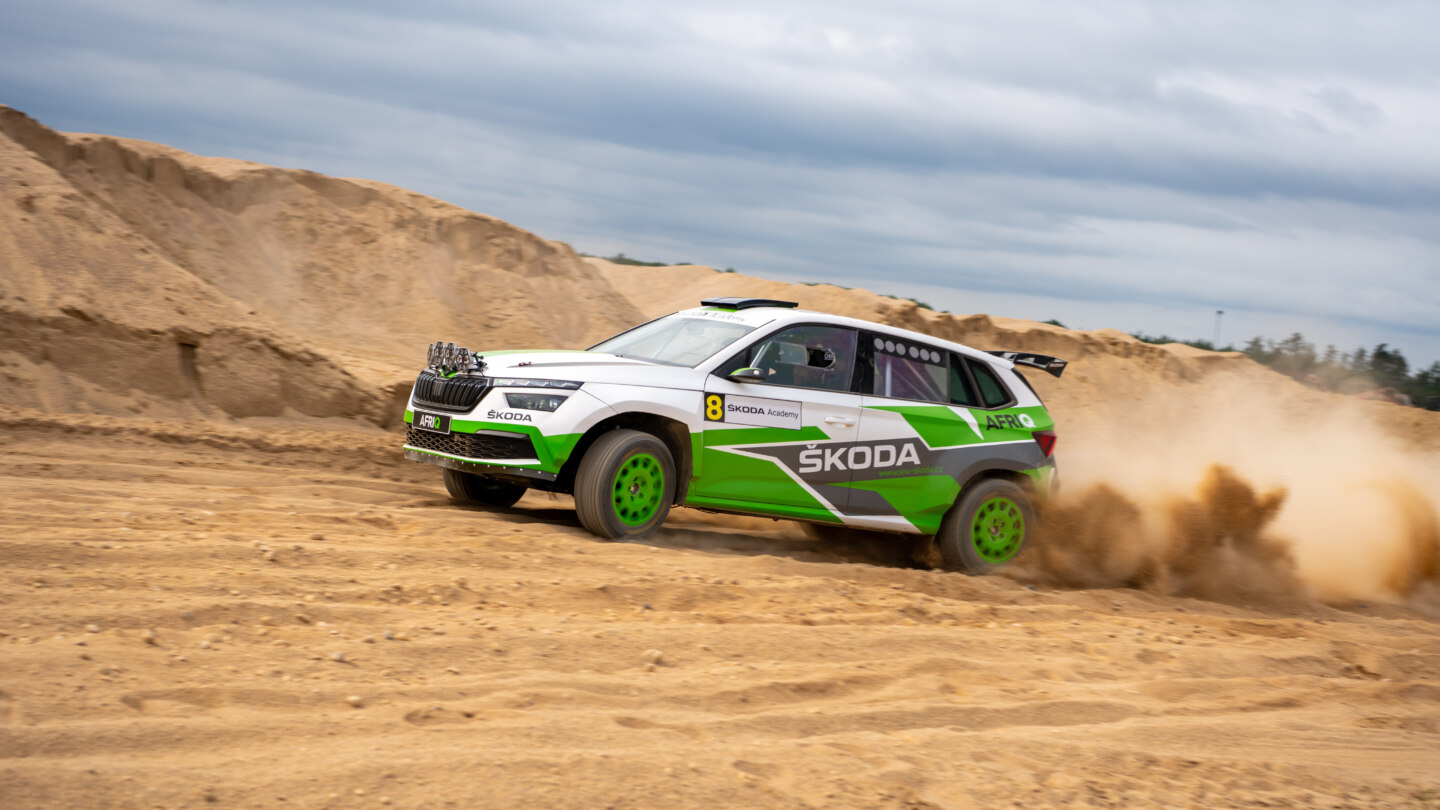 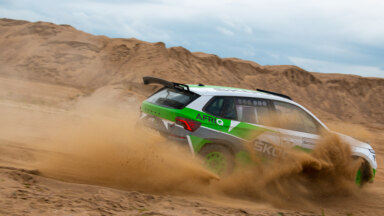 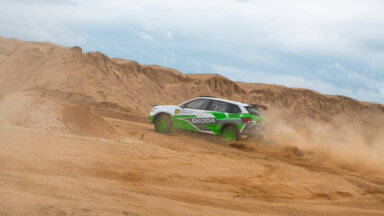 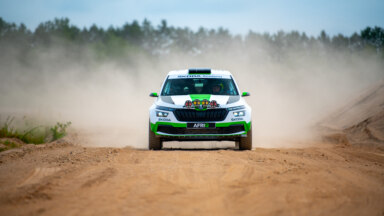 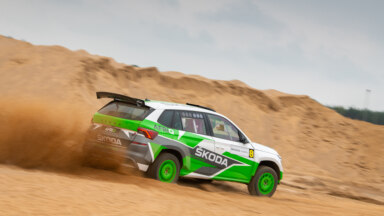 “If the AFRIQ were fitted with a robust racing chassis...” Klymčiw concludes, reflecting on how he would toughen up the car for the rigours of the Dakar race, “... and if the engine could be re-tuned to some three hundred horsepower, the combination of a light, agile car with a supercharged engine and all-wheel drive would be really tempting,” he muses, envisioning a new car for the Dakar Rally. “But as I said, even with the car as it is today, a less demanding twisty mountain rally could be an unforgettable experience. I would jump at the chance!” Klymčiw says with a smile.

He made his debut at the Dakar Rally in 2015 on a motorcycle, immediately achieving a good result beyond everyone’s expectations: 20th overall, eighth among the non-works riders and second among the rookies. He got off to a good start the next year, too, but a nasty crash ended his race. Despite the doctors’ pessimism, Klymčiw was back in training again six months after the accident. At the 2017 Dakar he came eleventh, just 37 seconds off the top ten. This standing is still the best Czech Dakar two-wheeler result. His grimmest moment came in 2018, when he crashed again on the Dakar, leaving him with four crushed vertebrae, triple cardiac arrest, three ruptured arteries supplying blood to the brain, and unconsciousness. He only came to after being transported to Prague. After four Dakar motorcycle entries, Klymčiw changed tack in 2021, getting behind the wheel of the first ever ŠKODA in this famous race. With the ŠKODA 130 LR, he competed in the Dakar Classic category, which uses a different route than the modern rally cars. Ondřej Klymčiw’s debut was a great success, taking first place on stage six and third place on the other three stages. 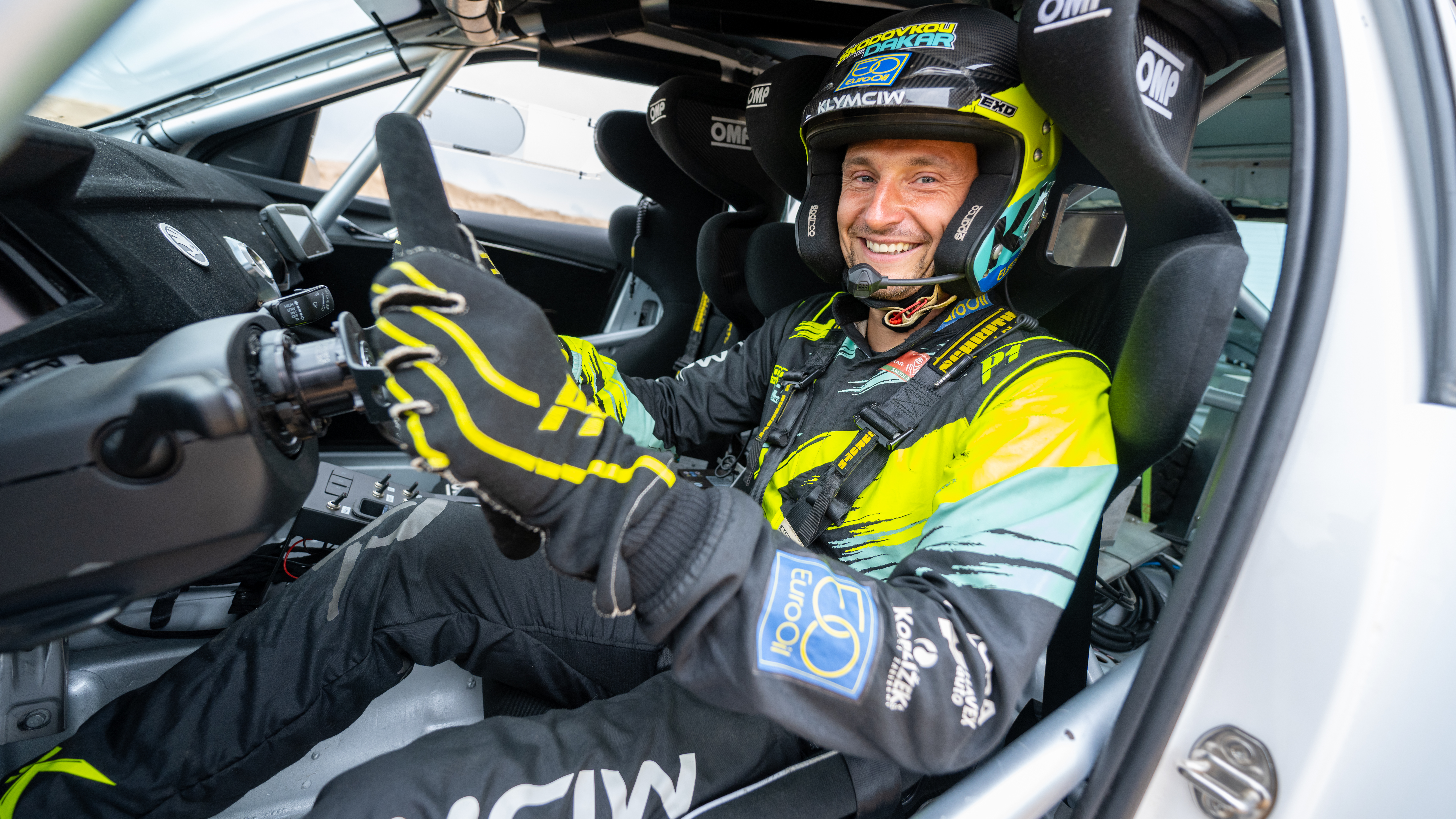 A DESERT WOLF TEST-DRIVES THE AFRIQ: LET IT RACE! 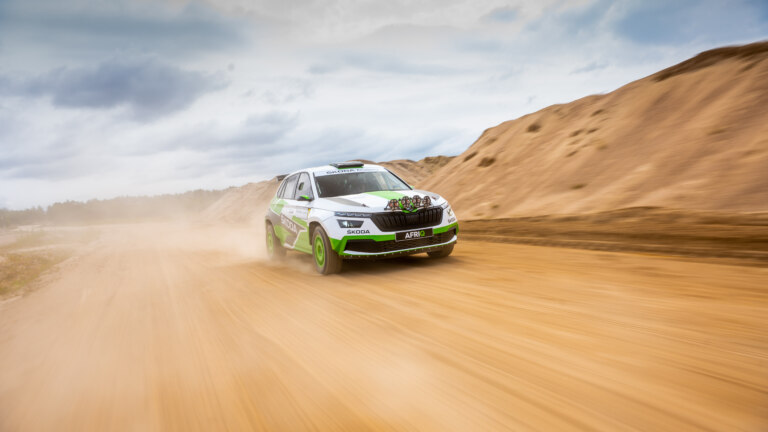 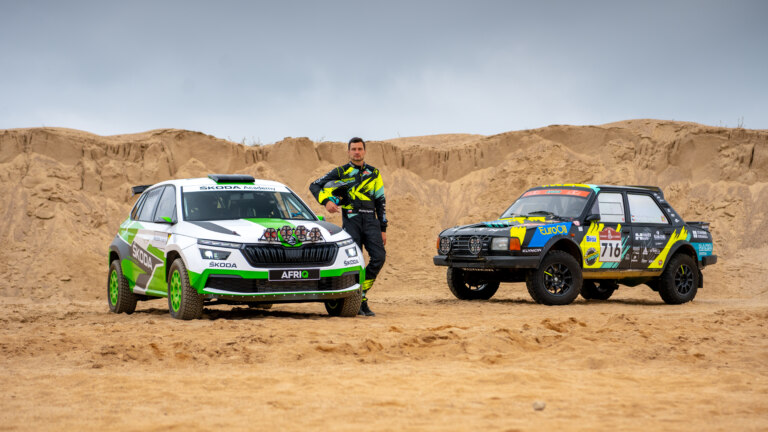 Ondřej Klymčiw with the ŠKOKDA AFRIQ and the ŠKODA 130 LR he drove on the famous Dakar rally. 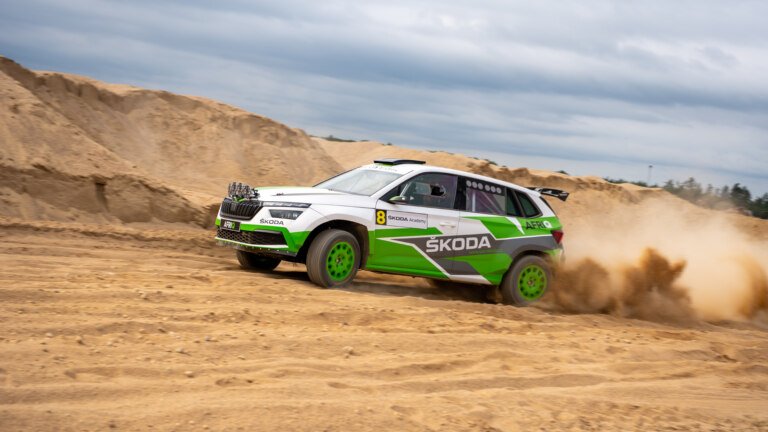 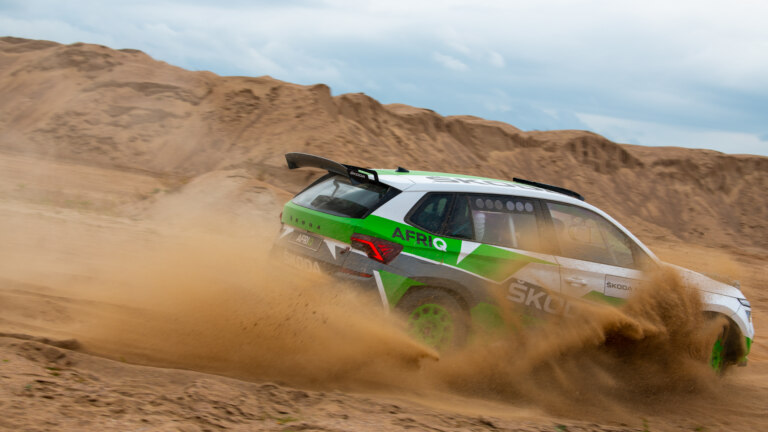 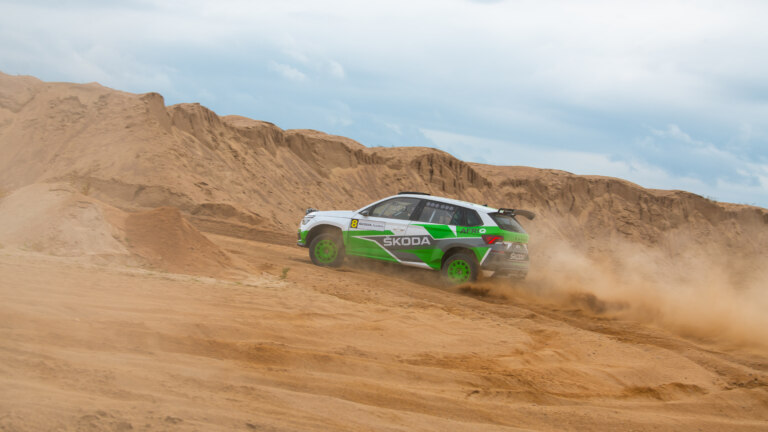 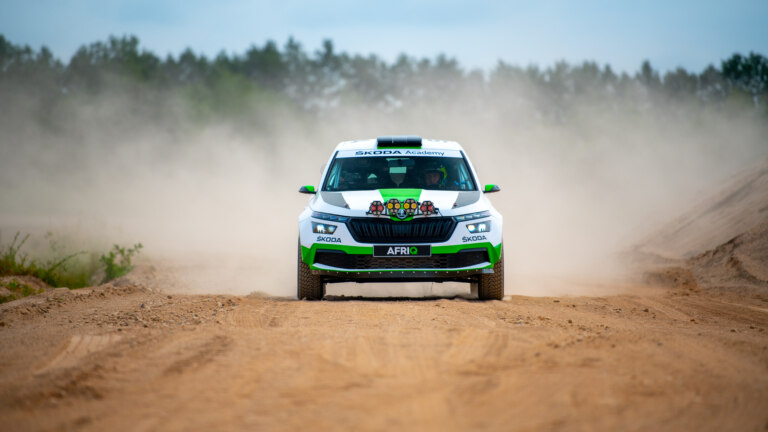 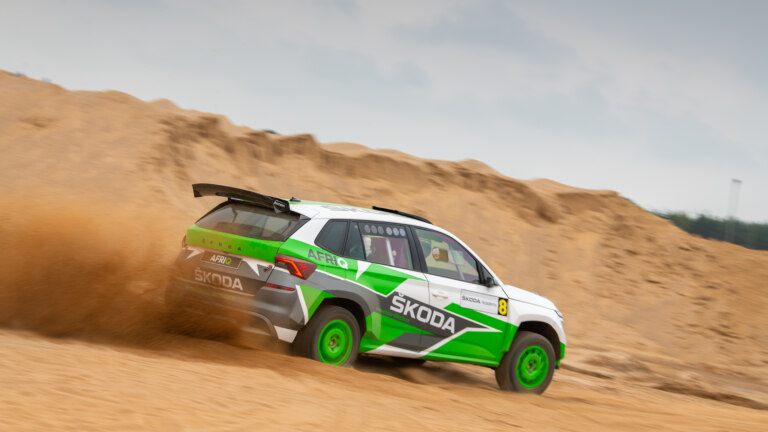 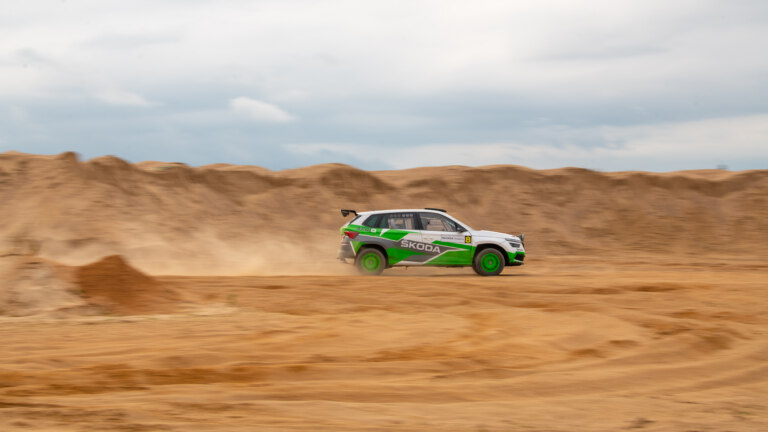 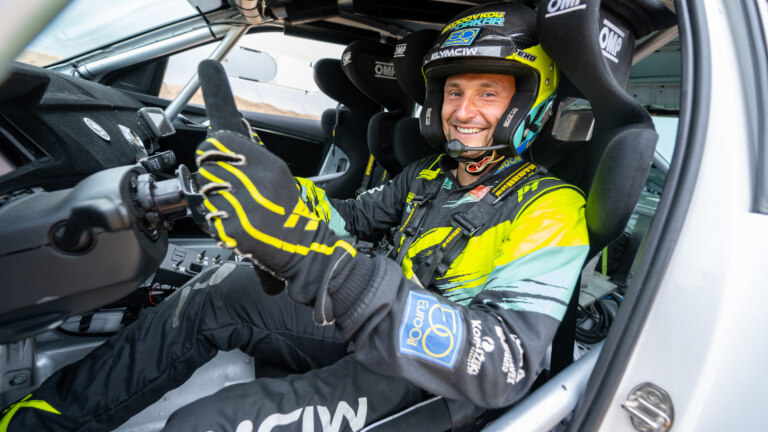