Seventy years ago, ŠKODA almost caused a sensation at the 24 Hours of Le Mans endurance race. Read the story to find out how one of the car’s cheapest parts made all the difference.

A sensation was seemingly within reach. The long night at Le Mans was nearly over, and the ŠKODA team was holding its own in second place in its class and in fifth place in the overall standings. The French race car specialist Gordini entered a total of six cars in the event, yet they seemed to have no chance against the proud little group of Czechs, whose flashy white overalls could hardly cover up the fact that their race car had been built with the greatest simplicity.


The ŠKODA Sport works racing car was taken out for a spin after many years by German legend Hans-Joachim Stuck. In the video you’ll see what the two-times Le Mans victor had to say.

In 1950, Europe was in the midst of the Cold War, so ŠKODA came literally from another world, and one that was by no means better off. Still, the Czech car was driving one fast lap after another at the front. From this point of view, ŠKODA’s Le Mans car can be seen as a fantastically bold project, and this was absolutely in keeping with the brand’s motor sport tradition, which was already established by then.

The aluminium race car with technology close to that of a production model was near the top of its class.

Today, can anyone still imagine how much courage, ingenuity, and motor sport enthusiasm the engineers and mechanics had to summon in order to bring such a car into existence in the post-war turmoil? Probably not. Just for comparison, the ŠKODA Sport was created in 1949, and when the car entered the 1950 Le Mans event, the world’s toughest endurance race was still being held without a German carmaker. 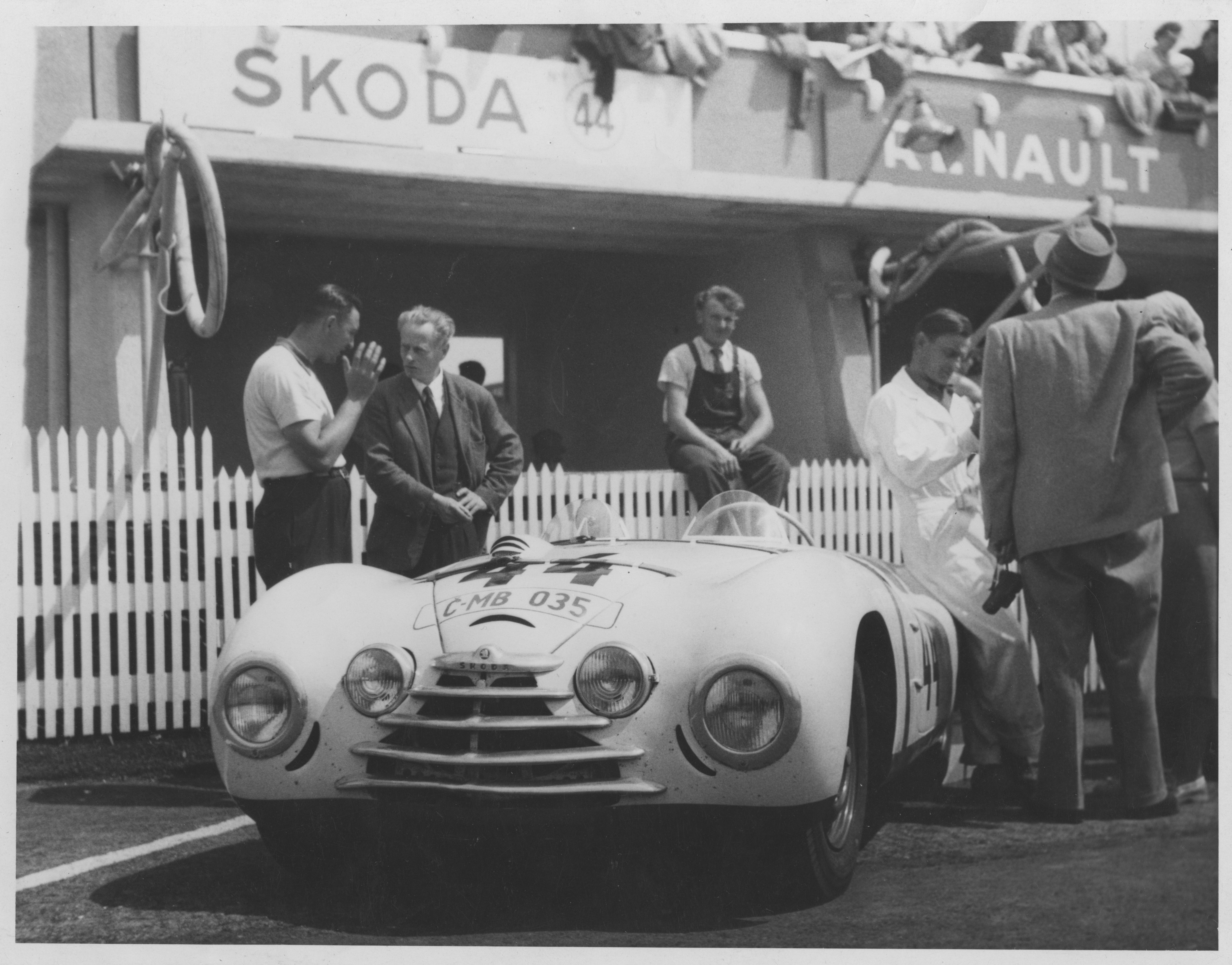 Almost more amazing, however, is how close the ŠKODA Sport was to production models. The first post-war model, the 1946 ŠKODA 1101 “Tudor”, served as its basis. The central-tube chassis frame and axles remained unchanged; just the brakes and gearbox were adapted to the requirements for racing at high speeds. In place of the sedan body, the race car got an appropriately trim aluminium exterior, and this lowered the vehicle’s weight to 590 kg.

The power of the 1.1-litre four-cylinder car was more than doubled by a tweaked standard production engine with a Solex carburettor and a methyl alcohol fuel mixture. The car’s 50 hp (the Tudor had 32 hp) was sufficient in combination with the barely waist-high aluminium body for a top speed of 140 km/h. Another competitive advantage of the ŠKODA was its fuel efficiency. A full tank allowed four hours of driving, so Václav Bobek and Jaroslav Netušil were able to drive noticeably longer shifts than their competitors.

Everything was going perfectly until the break of dawn, when a horrible misfortune struck the Škoda team. The breaking of a piston pin circlip – a part that would have cost pennies – caused the engine to break down. And because in those days one could repair a car only with replacement parts that had been carried onboard, that meant the end for ŠKODA. In any case, the ŠKODA team was not alone in its enormous disappointment. Not even half of the participants that entered the race reached the finish line, and not a single one of the six Gordini cars was among them.

Two of these cars were built, and the Le Mans car was long regarded as lost

With the hope of doubling their chances the following year with two cars, the team made its way back to Mladá Boleslav – but things turned out differently because of the political decision in the time of Cold War. 1950 would remain the Škoda team’s only attempt. That really is a shame, because the race the following year showed how fast the ŠKODA Sport truly was. In 1951 Porsche made its Le Mans debut in the 1.1 litre class, and the lap times of the 356 remained behind those of the ŠKODA.

Racing legend Hans-Joachim Stuck has a wealth of experience with the 24 Hours of Le Mans race. Now 69 years old, the driver took part in the race nineteen times (last in 1998). Twice he contributed to his team’s victory in the absolute rankings, as well as two second places and three third places (and one category victory). Stuck is well aware of how tough this race is and how success depends on a combination of the drivers’ performance, the team and the technology.

This experience is one reason why he has boundless admiration for the ŠKODA team’s efforts in 1950. “I have to take my hat off to them. Leaving the world behind the Iron Curtain and setting off for Le Mans was a very difficult decision,” he says about the ŠKODA Motorsport team of the time. He acknowledges that racing in the 1950s was very tough. “The drivers from that period were true heroes. Driving those cars was difficult, with no power steering, no power brakes, no electronics or telemetry or ABS or radio link to the pits... When something happened, the driver had to repair the car on the track,” says Stuck, listing the pitfalls that today’s drivers never face.

And he bows to the ŠKODA Sport car as well. “It’s such fun to drive. The rear end has always been a racing driver’s most important sensor, and on this car you really feel how the steering and suspension are working, you know exactly what the car is doing. The brakes were ahead of their time, without doubt,” Stuck says in praise of the unique car. “When race-ready, fuelled up and with tools and some spare parts, the car weighed just around 700 kilograms. That’s nothing. And Le Mans has quick and long curves that are great to drive in a light car,” Stuck adds shortly after taking a ride in a carefully restored car. 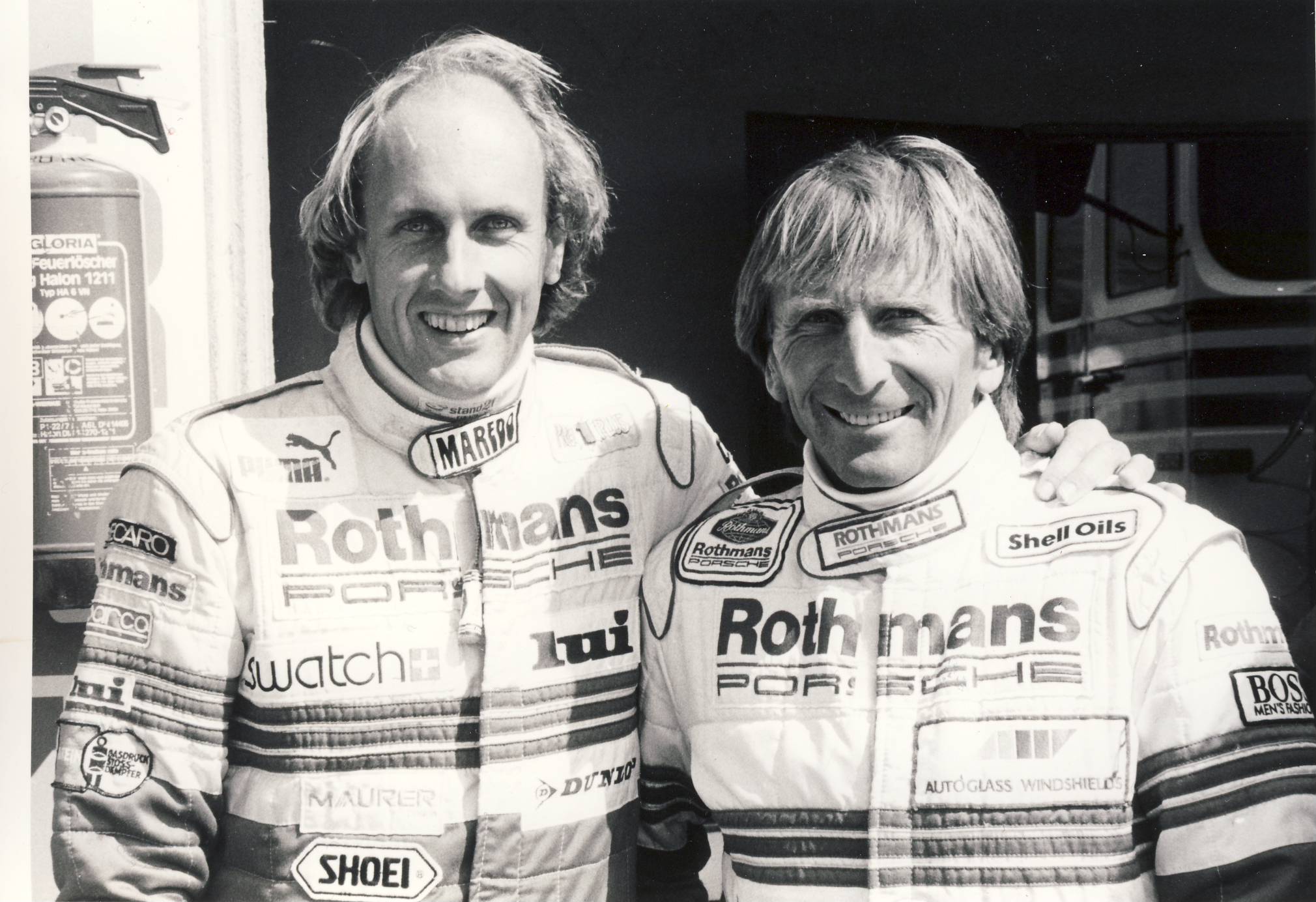 Hans-Joachim Stuck and Derek Bell at Le Mans in 1987

Even though no Le Mans revenge ever came about, the Sport truly reached the age of Methuselah as race cars go. Over the next twelve years, the car entered another 80 races, mostly with very successful results, but by then only at Czechoslovak races or at events in ideologically aligned countries.

A body was built for another ŠKODA Sport, and both cars got increasingly powerful engines. By the final stage of development, there was a version with a carburettor producing 120 hp, then a dual compressor engine generating an impressive 190 hp. In 1953, with some aerodynamic modifications, the Le Mans car achieved a Czech speed record in the class up to 1,100 cm3 at 160.1 km/h. 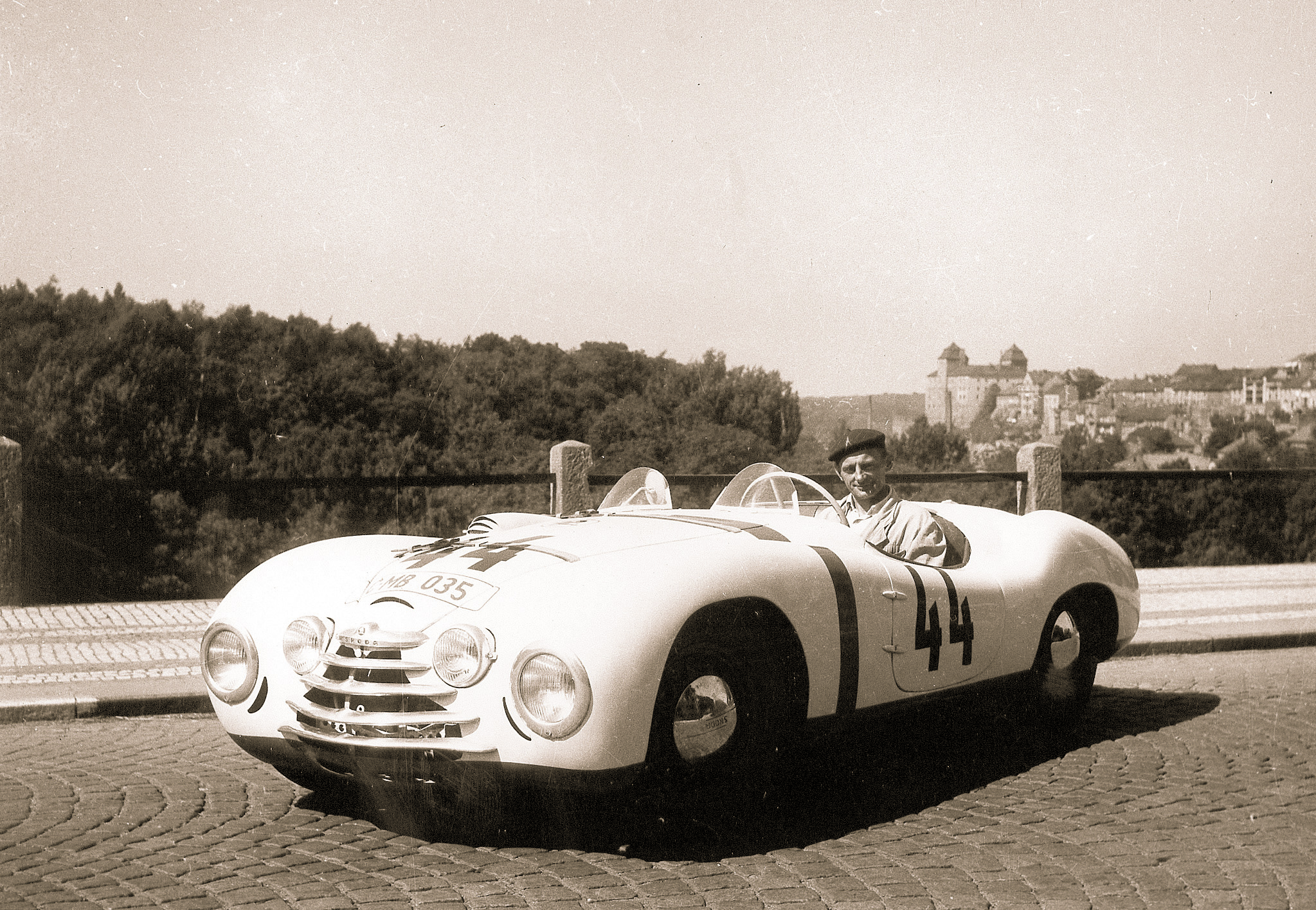 Today, the Le Mans car is privately owned and is in the best hands imaginable. Three generations of the family had taken part in the ŠKODA’s development. As the coordinator, Michal Velebný is responsible for the restoration and maintenance of vehicles at the ŠKODA Museum. The Sport was nothing less than the fulfilment of a long-cherished childhood dream.

His grandfather had been responsible for the body design, and he left Michal Velebný the construction plans bearing his signature. “The car was long regarded as lost, and I only found it after lengthy detective work, in the course of which I talked with the former drivers, mechanics, and event organisers. Then it took several more years before the vehicle was again fully ready for action.”

Hans-Joachim Stuck achieved his first victory at Le Mans in 1986, a recent meeting with a ŠKODA Sport was very emotional

Above all, the remarkable thing about the car’s present condition is its great faithfulness to the original. The drivers must have been careful all the time with the ŠKODA Sport, because the body remained largely intact in spite of its extremely long racing career. This can be seen, for example, from the holes in the body for the starting number lights that were once required at Le Mans.

Apropos Le Mans: the ŠKODA Sport should be making its well-deserved comeback at the 24-hour race. The racing rarity from Mladá Boleslav will certainly be a welcome guest at the 2021 Le Mans Classic. 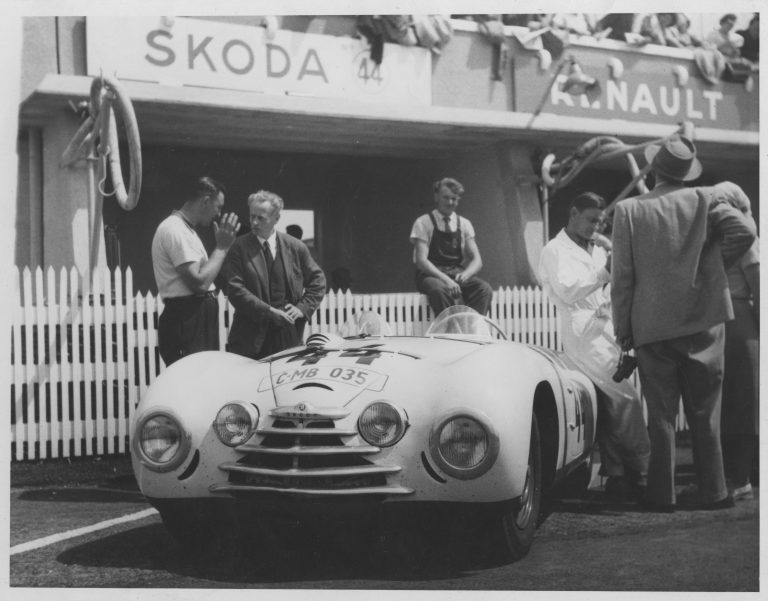 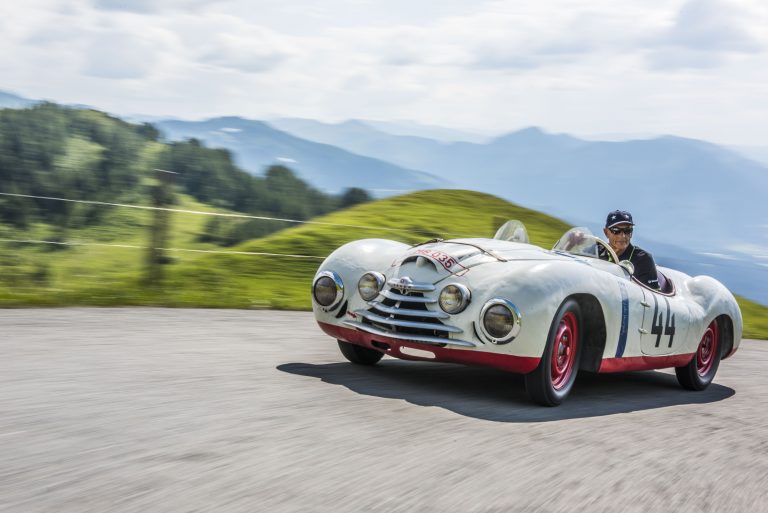 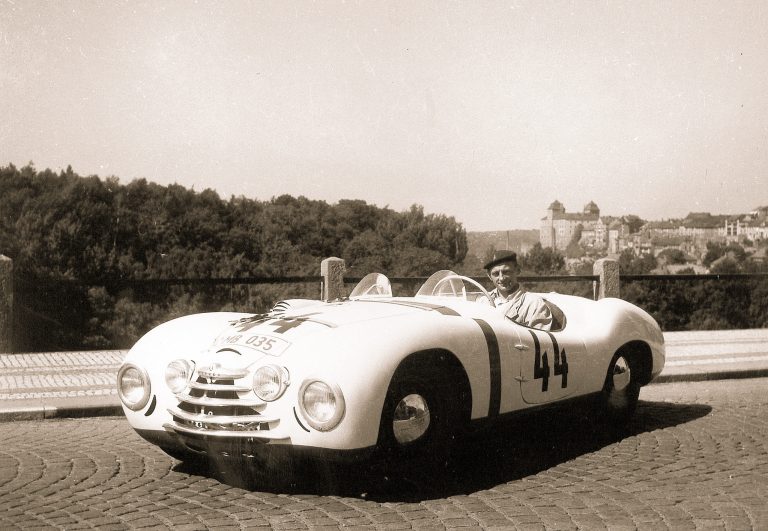 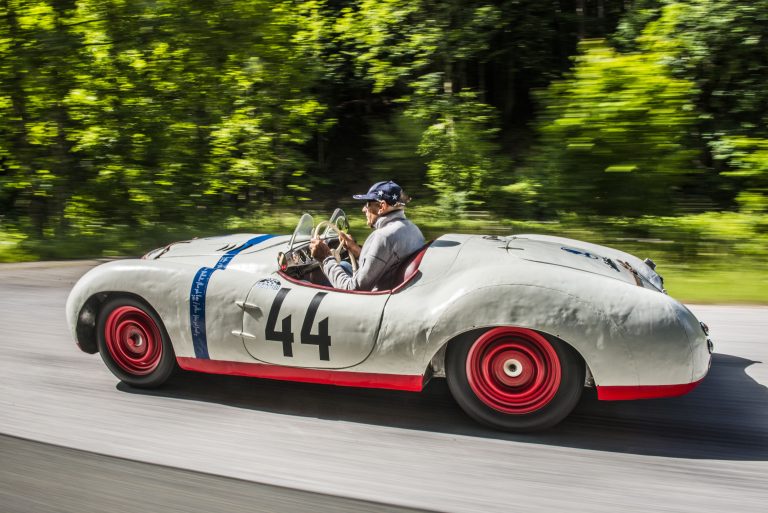 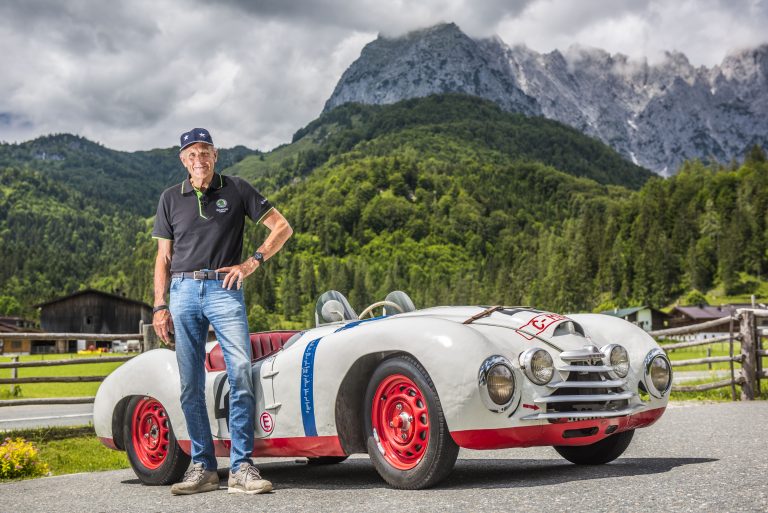 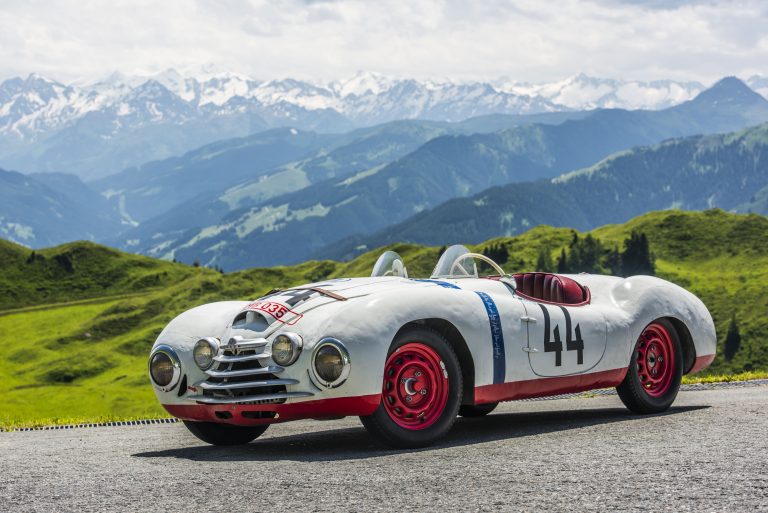 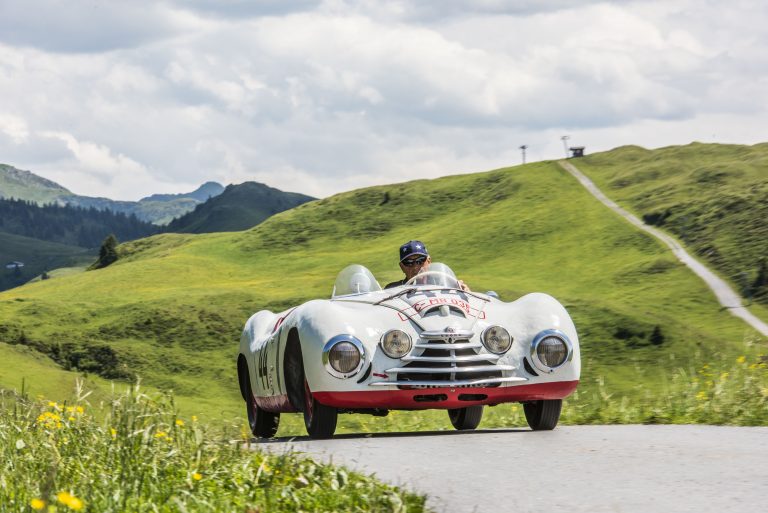 The ŠKODA Sport racing special was established in 1949 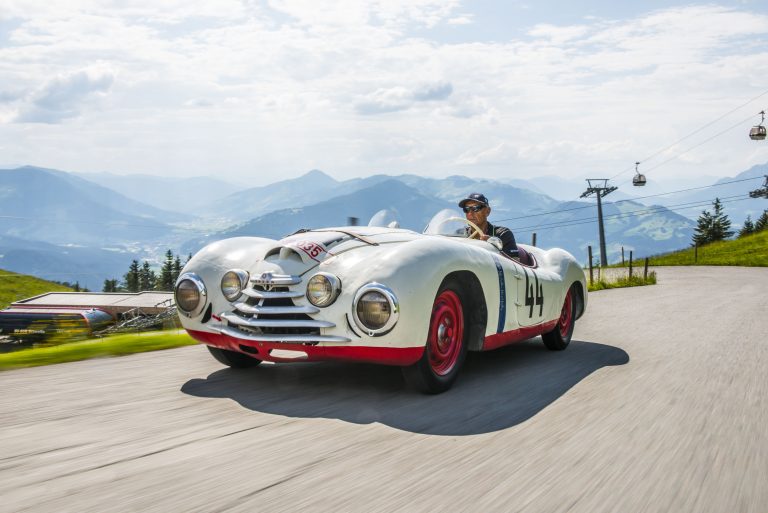 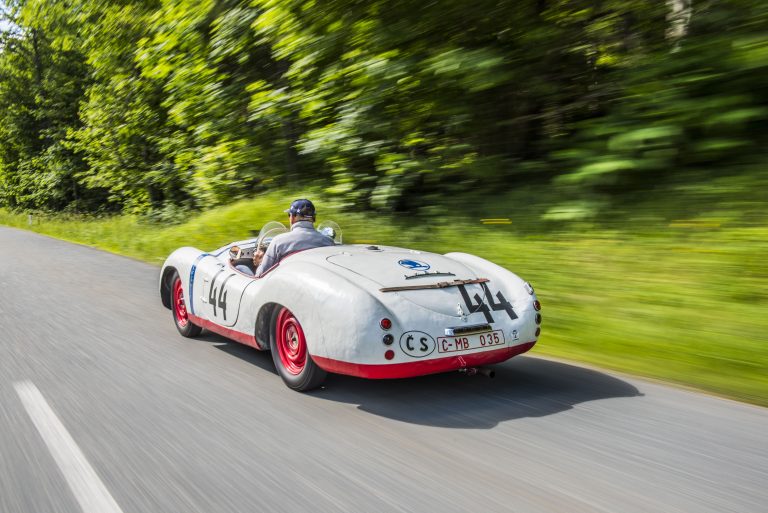 ŠKODA Sport on the road again 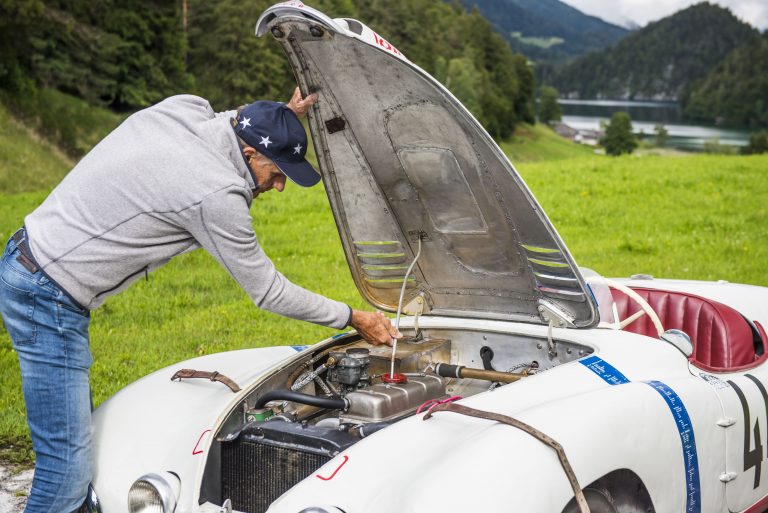