ŠKODA Motorsport has unveiled its new rally car. Crews from all over the world will want to drive the ŠKODA FABIA RS Rally2 to the same successes the previous generation achieved.

The new ŠKODA FABIA RS Rally2 is based on the fourth generation of the Czech carmaker’s smallest production model. It is a brand new racing car that takes advantage of the strengths of the production FABIA, among them refined aerodynamics, the stiffness of the body and new proportions. To these it adds specific racing features – protective frame, engine, gearbox or chassis – that have been developed to contend with the challenging rally conditions, drawing on all the ŠKODA Motorsport team’s experience.

Last year and this year, ŠKODA Motorsport put the car through intensive testing on asphalt and gravel tracks in the Czech Republic, France, Italy, Croatia, Germany, Belgium, Spain and the extreme climatic conditions of northern Finland. The result is a car that once again has the highest ambitions: to lead ŠKODA Motorsport customers to a series of titles.

“Standing still means going backwards, and this is especially true in motorsport. That’s why, in developing the new FABIA RS Rally2, we applied the experience we gained from the predecessor model and optimised every detail. The aim was to improve the most successful rally car in the world. I’m proud of the entire ŠKODA Motorsport team who have pursued this goal with great dedication. I would also like to thank our colleagues in Series Development; the fourth-generation FABIA provided us with a perfect basis for the FABIA RS Rally2,” is how Michal Hrabánek, the head of ŠKODA Motorsport, commented on the presentation of the new car. 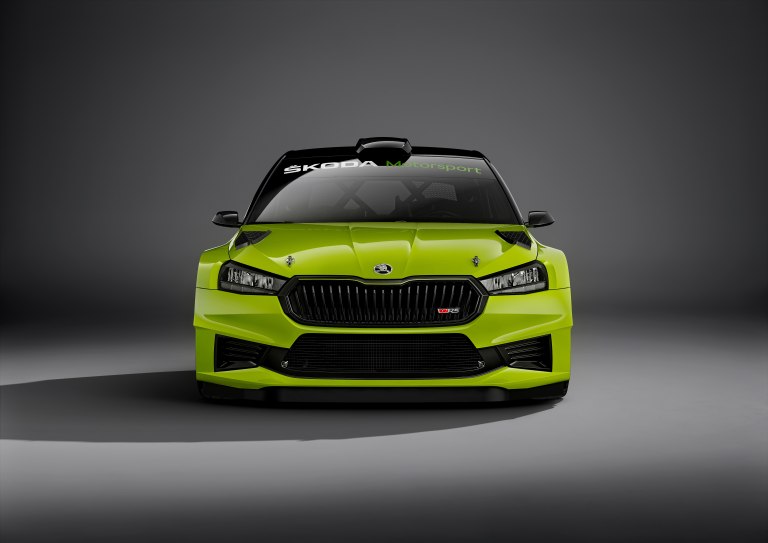 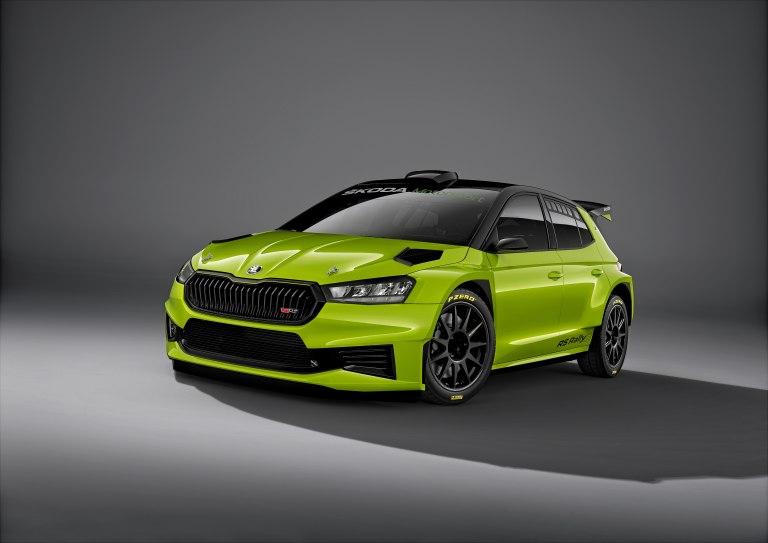 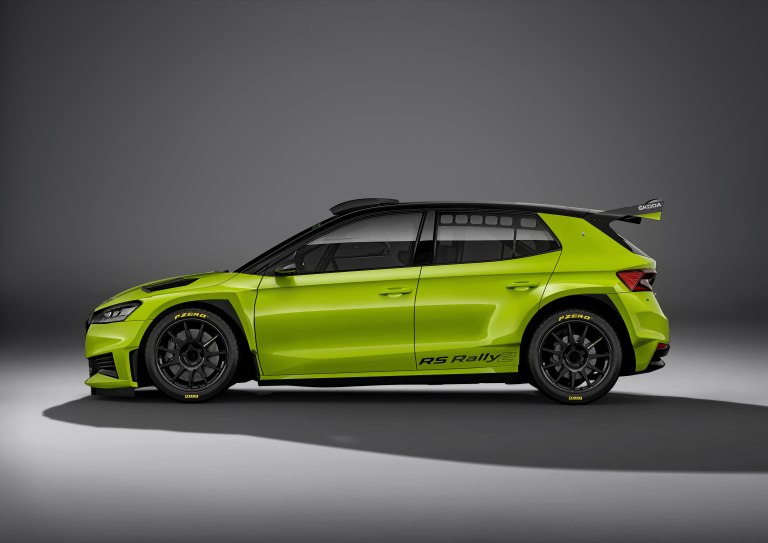 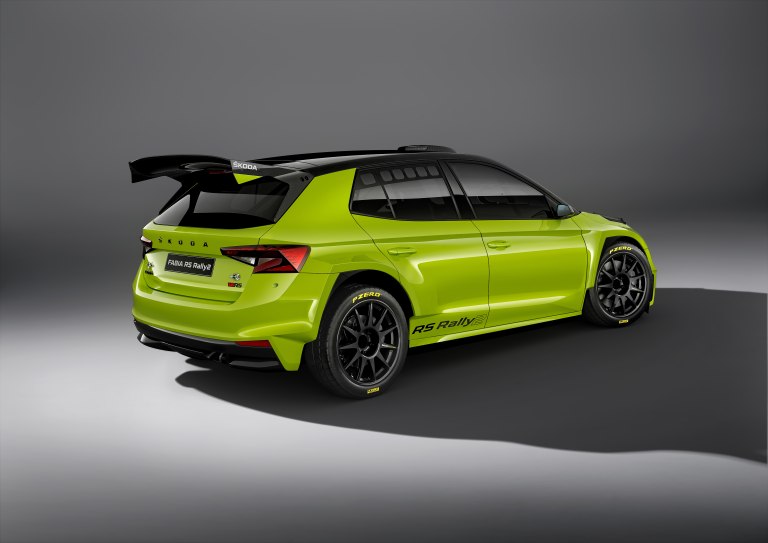 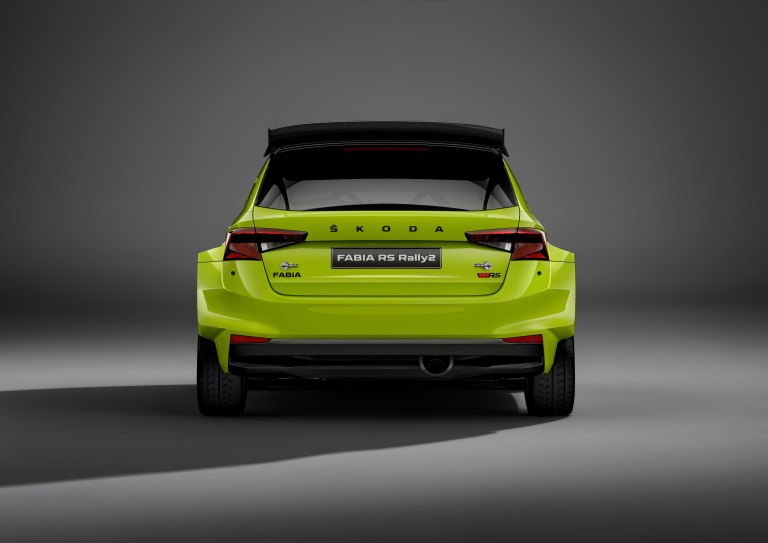 The new ŠKODA FABIA RS Rally2 is following up highly successful predecessors. The previous FABIA Rally2 and FABIA Rally2 evo models, based on the third-generation ŠKODA FABIA, are among the most successful rally cars of all time. ŠKODA Motorsport customers purchased more than 450 cars, which accumulated an incredible 4,186 podium finishes in events around the world in 13,091 starts up to the beginning of May, including 1,714 victories, and notably four in the famous Monte Carlo Rally.

Since 2015, the FABIA Rally2 has become the benchmark in the WRC2 category, bringing factory team drivers and private crews over 20 titles in Europe and triumphs in the regional championships of Africa, Central and North America, South America, the Asia-Pacific region and the Middle East. Crews with these cars have won 100 national championships, including six Czech Championship titles and three German titles. 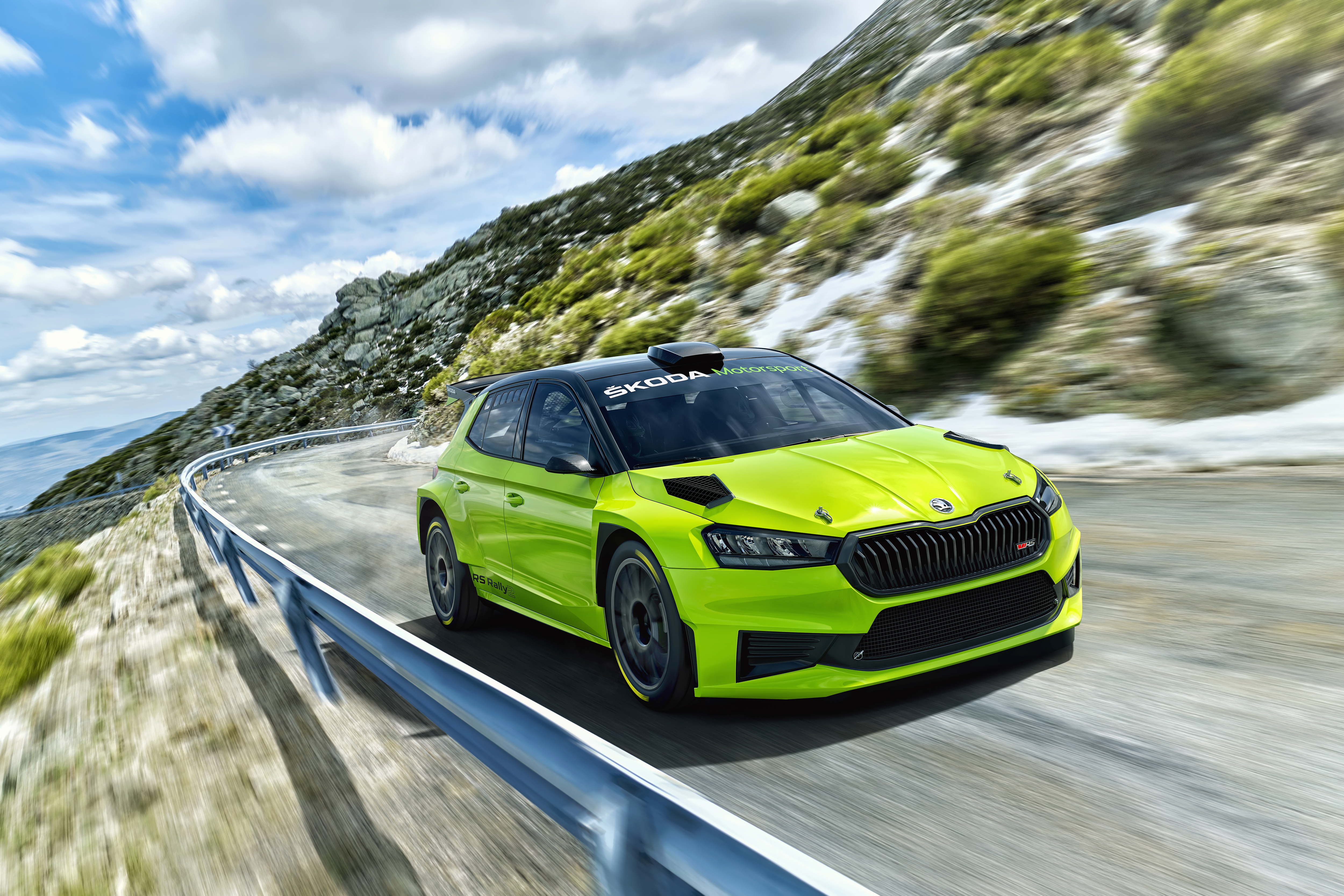 The fourth-generation ŠKODA FABIA is built on Volkswagen Group’s MQB-A0 platform, which has led to a number of changes to both the car’s proportions and its technical design. ŠKODA Motorsport engineers have used these changes to their advantage and tried to make the most of the new features during development.

The design of the new car, for example, is impressive, as it brings the rally car as close as possible to the production car. The ŠKODA FABIA RS Rally2 takes the regular version’s emotive design and adds dramatic racing features such as wider bumpers, air intake and vent holes and a new rear wing. To celebrate the closer link with series production, the car was unveiled in a new colour scheme, with the traditional green shade replaced by the more vibrant Green Mamba for ŠKODA Motorsport that ŠKODA customers can order for their mass-produced ŠKODA OCTAVIA RS and ENYAQ COUPÉ RS iV. 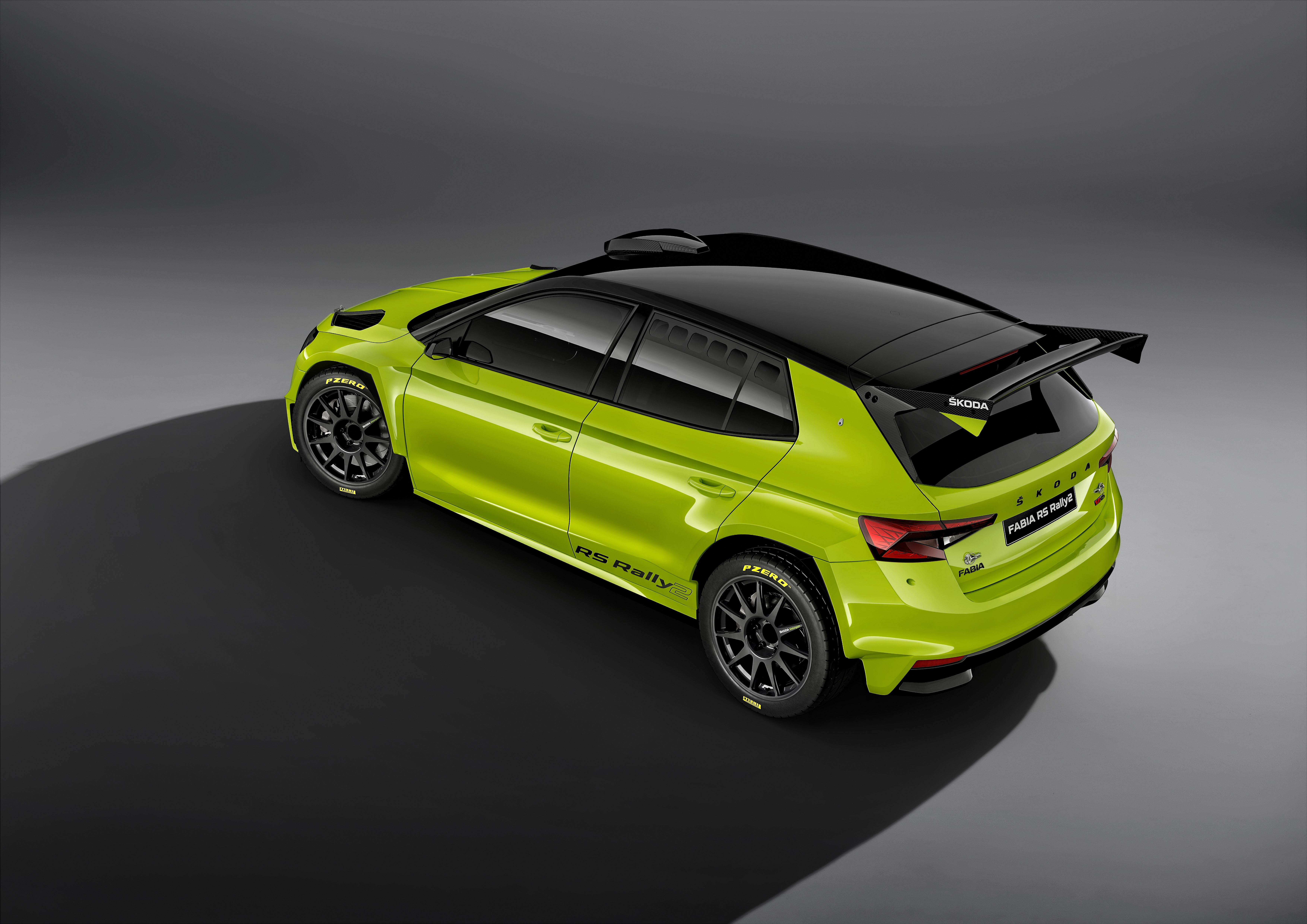 The refined aerodynamics of the production version formed a great basis for the motorsport engineers to work on. It gave them more leeway for fine-tuning the racing car’s drag more, resulting in a significant increase in downforce compared to the FABIA Rally2 evo. This downforce is almost double, with the resulting improvement in the car’s grip and therefore its cornering speed.

The car’s already top-notch safety has also taken a big step forward. Of course, the FABIA RS Rally2 doesn’t use any of the safety assistance systems or the extensive airbag suite we know from the production model. But it does rely on the extremely rigid body structure, which has made it possible to further enhance the level of crew protection in the event of an accident. Stiff bodywork alone is not enough at the speeds that the competition specials reach, though, so there is the obligatory roll cage that is welded firmly onto the car’s platform even before the sides of the body are assembled onto the car. This ensures the highest possible quality of the welds and increases safety. This frame consists of a total of 35.8 metres of tubing. 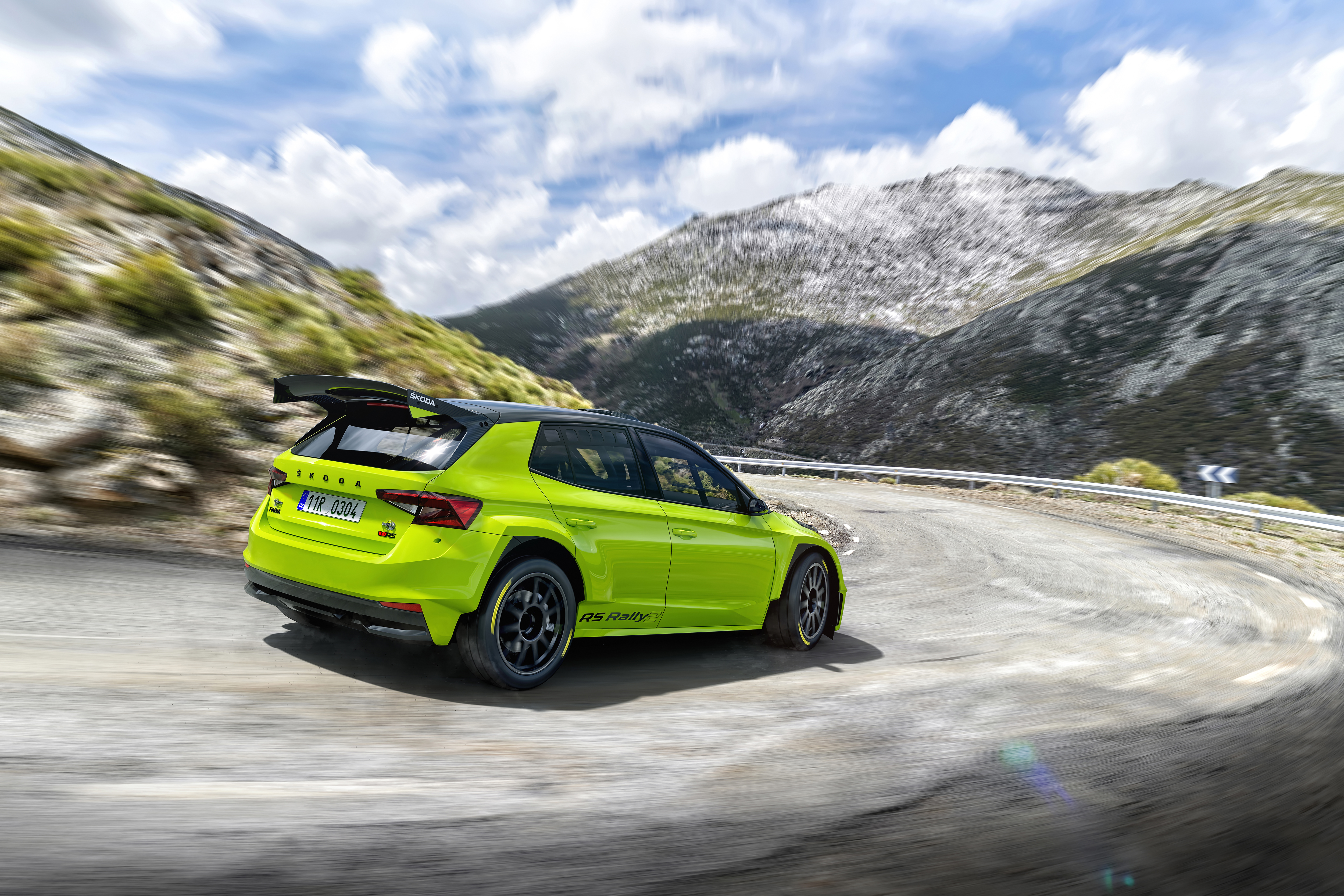 Compared to the previous generation, the new production ŠKODA FABIA has also grown a little in size without adversely affecting the weight of the car. ŠKODA Motorsport engineers have made the most of this too. The new proportions give them more options in terms of weight distribution. And this, combined with the increase in the car’s wheelbase and the superior aerodynamics and more precise chassis adjustment options (thanks to the stiffer bodywork), results in improved stability. There is also more space in the engine compartment, which has enabled beneficial changes in the powertrain area as well.

A racing FABIA of every generation

Every generation of the ŠKODA FABIA has become the basis for a racing car. It started in 2003 with the FABIA WRC, which was based on the first generation of the car. The top-category car, with its two-litre turbocharged engine delivering 221 kW (300 hp) and 600 Nm of torque, is the most powerful FABIA racing car ever built. 24 of the cars were produced. In 2009 this car was followed by the FABIA S2000, based on the second-generation hatchback. Designed for more affordable racing, the car featured a 2-litre naturally aspirated engine with 206 kW (280 hp) and 250 Nm of torque. The FABIA S2000 won a total of 50 titles in national and international championships. It was then replaced in 2015 by the FABIA R5, a similarly designed car based on the third-generation FABIA. This car was built according to the new R5 group rules, i.e. with a turbocharged 1.6-litre engine, and became a rally benchmark. Along with the improved FABIA R5 evo launched in 2019, this version has so far notched up 1,710 victories. From 2020 onwards, following an FIA nomenclature change, these models bear the FABIA Rally2 and FABIA Rally2 evo designations. They have now been followed by the fourth generation, the FABIA RS Rally2. 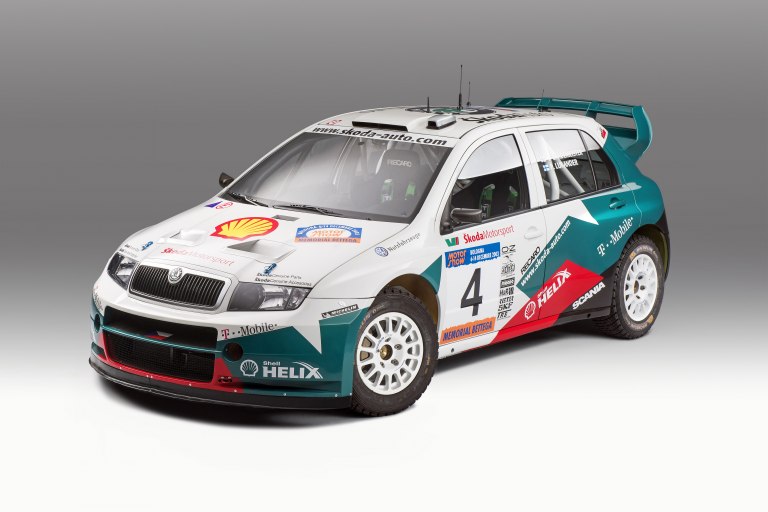 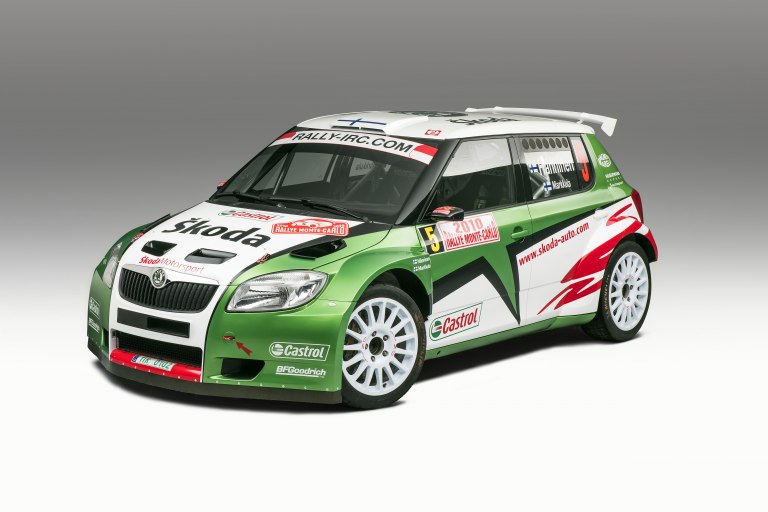 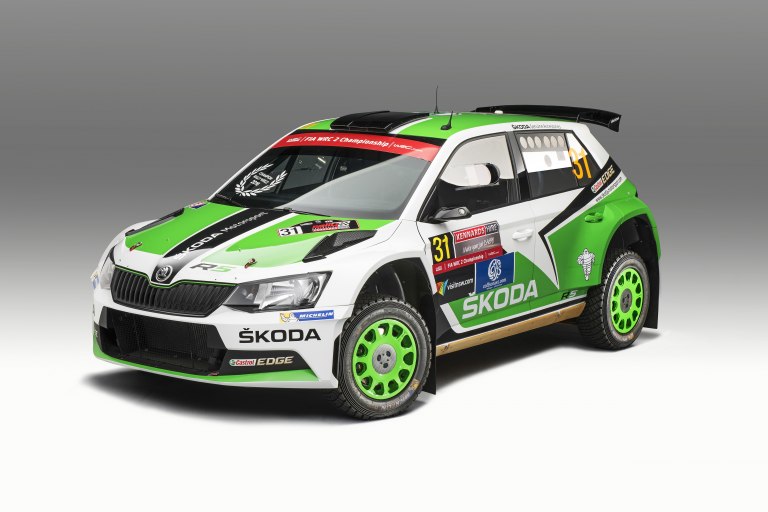 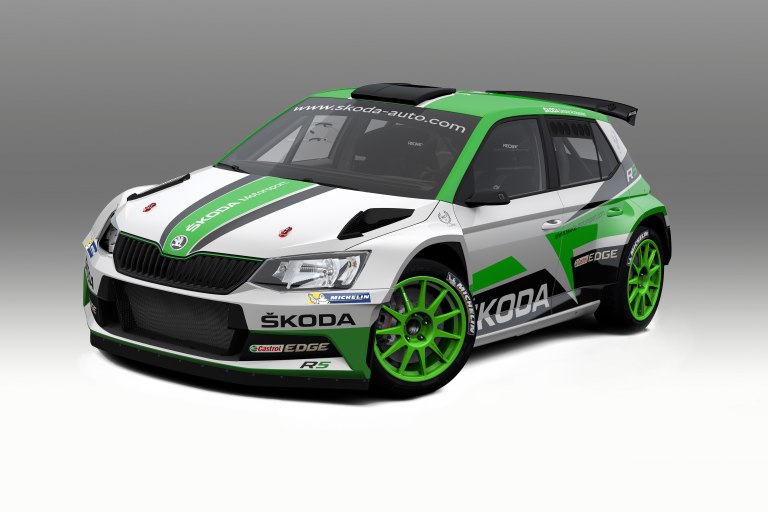 Muscle under the bonnet

The engine under the new rally car’s bonnet is brand new, even though it may not look like it at first glance. The rules for Rally2 cars stipulate that the power unit must have a maximum capacity of 1.6 litres, which the new engine has just like its predecessors, and four cylinders. The power unit is based on the standard 2.0 TSI engine used by ŠKODA AUTO in the OCTAVIA and SUPERB models. After being redesigned for the purpose of powering a rally car, the engine delivers an output of 214 kW (291 hp) and 430 Nm of torque. Test drivers have praised the better torque delivery and better throttle response compared to its predecessor. A special five-speed sequential transmission takes care of transferring the engine’s power to the road surface, distributing it to all four wheels using front and rear mechanical axle differentials. One new feature is the electro-hydraulic control of the inter-axle clutch, allowing the front and rear axles to be disengaged by applying the handbrake, which is often used in rallying to get around sharp corners quickly. 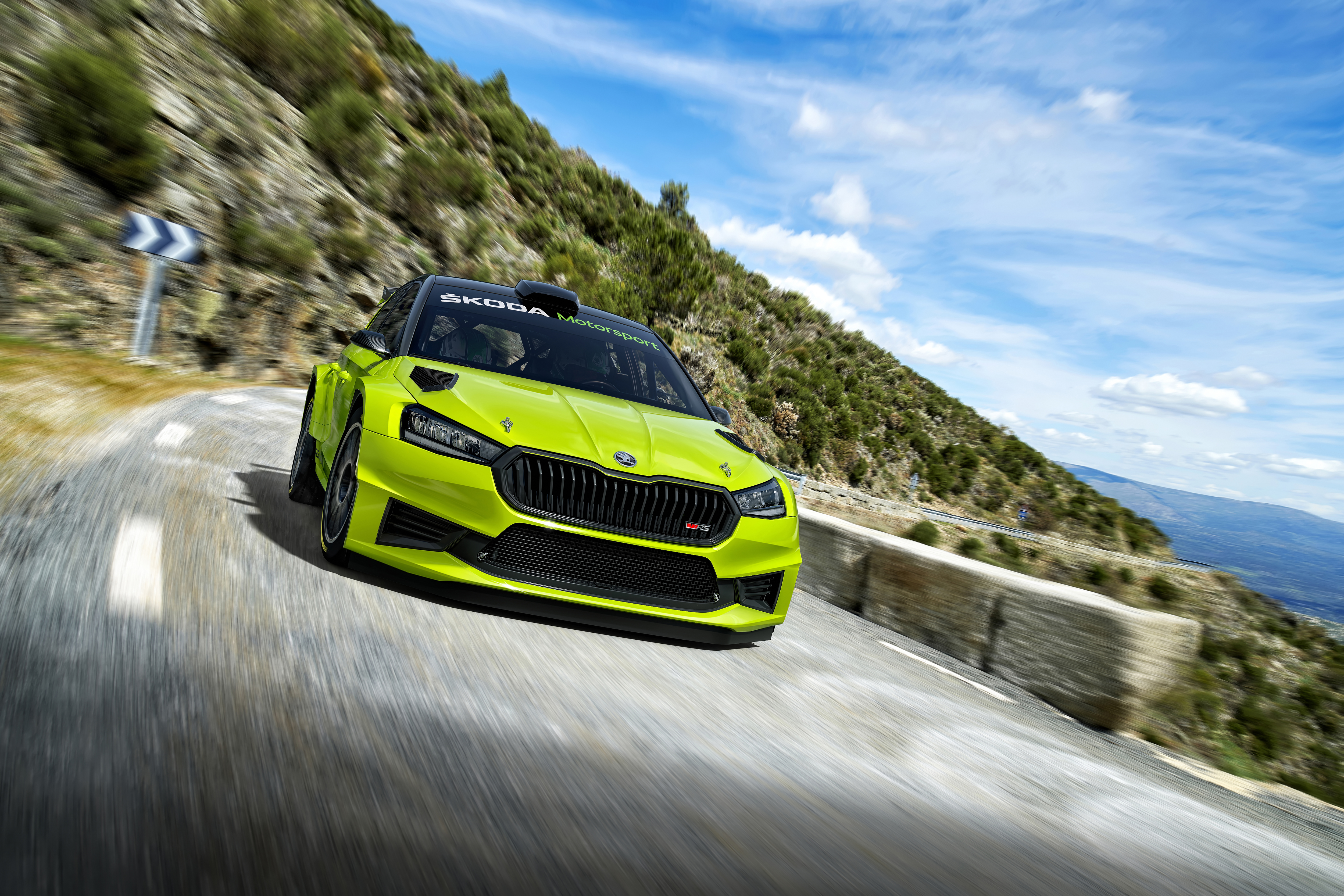 The chassis, which is completely different from the production car, is also specific to the racing car. It uses the McPherson system, and all components, such as the gearbox and other drive components, are designed to withstand the extreme stress of time trials. The brakes – always disc brakes with internal ventilation but adapted to the given surface – are designed with this in mind. For asphalt competitions, the brakes are 355 millimetres in diameter at the front and 300 millimetres at the rear (the car uses 18” wheels), while for gravel the discs are 300 millimetres in diameter at the front and rear (15” wheels are used).

Watch the premiere of the ŠKODA FABIA RS Rally2 special:

One of the rally car’s special safety features is the fuel tank made of a combination of nylon and special rubber according to the safety standard defined by the International Automobile Federation FIA. The material is designed to ensure the tank’s maximum resistance to damage or punctures as much as possible in the event of an accident. Inside the 82.5 litre tank there is also special foam which, in addition to its safety properties, reduces fuel leakage. The tank is protected on the underside by a housing made from a combination of fibreglass and Kevlar. And by the way, the petrol that the competition teams fill the tank with is entirely from renewable sources and has no fossil components.

Since 2020, ŠKODA Motorsport has switched its focus from intensive works participation in competitions to maximising support for customer teams, enabling them to compete for victory in international and national championships with factory support. At selected events in the World Rally Championship (WRC) and European Rally Championship (ERC), the customer teams are thus able to make use of a ŠKODA Motorsport factory truck with an extensive stock of spare parts and first-class technical support from the works engineers. ŠKODA Motorsport also offers customer teams regular deliveries of parts or, for example, check-ups and overhauls of engines, gearboxes and other vehicle components. It provides teams with consultancy services and trains their mechanics and technicians. With the help of this support, the German team Toksport WRT secured the WRC2 world driving title for the 2021 season, as well as the European title. Andreas Mikkelsen is defending his world title this season, with him and his co-driver and other crews making up the two official Toksport WRT teams competing in WRC2. 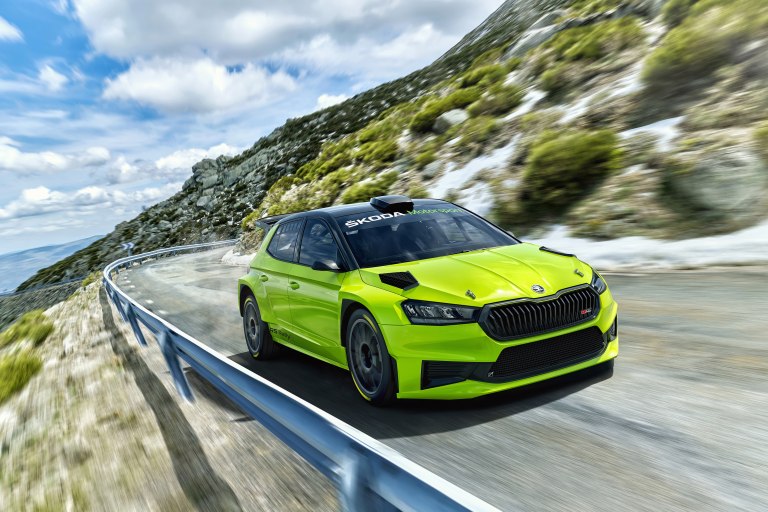 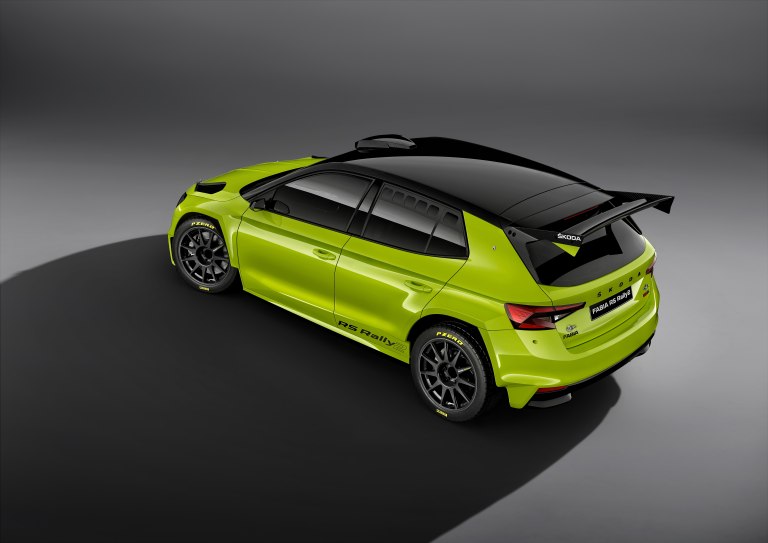 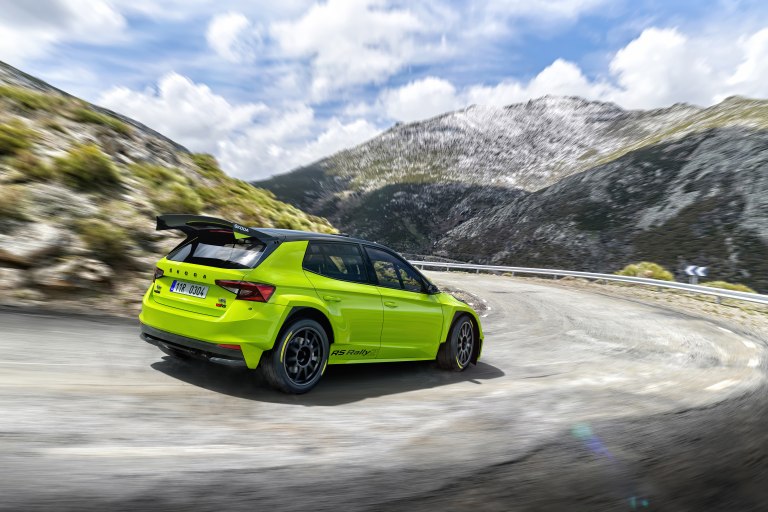 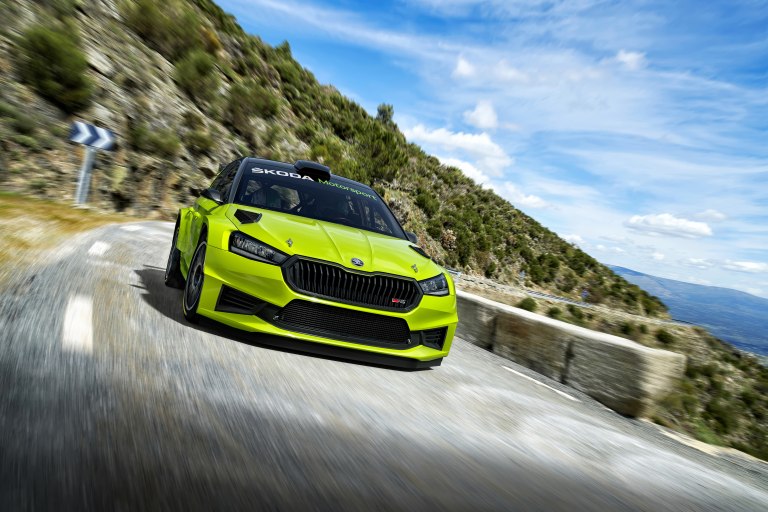