Join Ambre-Victoire and Aljaz Babnik on the third and final leg of their Iberian road trip. This time they head into Spain in the enjoyable company of a ŠKODA KODIAQ RS.

In the previous two parts of this series documenting their travels across the Iberian peninsula, our two guides explored Portugal – from its beaches to its vineyards, all the way to the River Douro that forms a natural border with Spain. Now it’s time to cross that border. But don’t expect classics like Barcelona, Madrid or the Escorial. Surfer and yoga instructor Ambre-Victoire and photographer and filmmaker Aljaz Babnik prefer to go where there are more waves and fewer tourists. Join them.

The ŠKODA KODIAQ RS stops with our two guides in the Asturias part of the Picos de Europa limestone mountain range, which is spread over the three autonomous communities of Cantabria, Castile-Leon and Asturias. The mountain range covers an area of about a thousand square kilometres and lies about twenty kilometres from the Bay of Biscay coast. The highest peak is over 2,600 metres above sea level, and the range boasts more than two hundred peaks over two kilometres in height. Spain’s first national park was established in the western part of the range in 1918, and in 2003 the Picos de Europa National Park was designated as a UNESCO biosphere reserve. 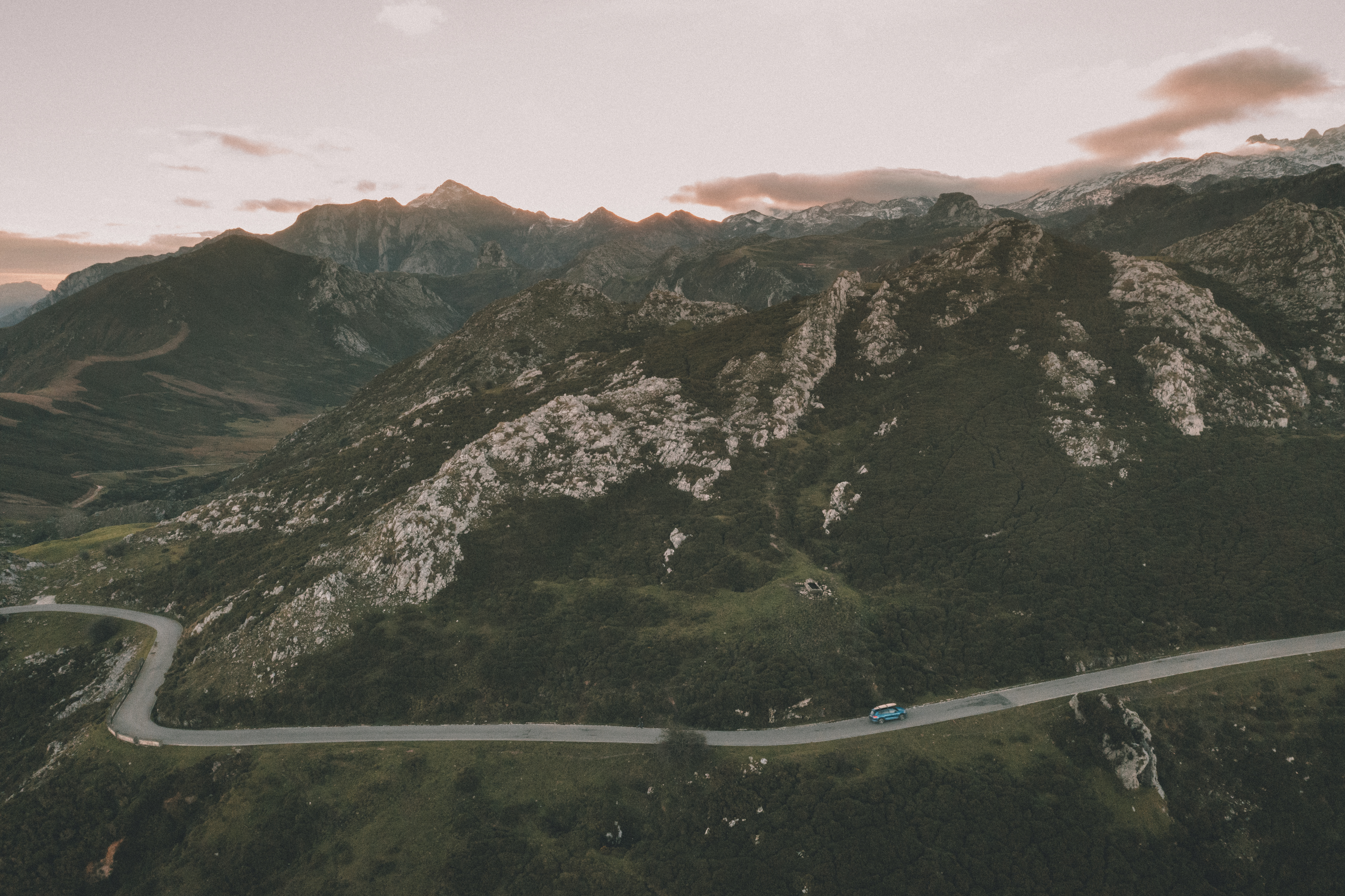 In addition to its huge interior, last year’s modernised sports version of the large SUV KODIAQ serves up a generous helping of adrenaline and dynamism. The sporty bumpers, black paintwork and up to 20-inch alloy wheels catch the eye straightaway. Confidence, performance, excitement but also safety – 180 kilowatts of power make this RS the ideal companion for long journeys. The RS version is equipped with a sporty three-spoke steering wheel, and is also available as a seven-seat interior with ergonomic and electrically adjustable front seats. Passengers will love the high-end infotainment system with a touchscreen display of up to 9.2 inches, among many other modern tech conveniences. The driver gets a 10.25-inch virtual dashboard as standard from the Style trim upwards, giving four different display options and, in the RS version, an additional sporty dashboard design. 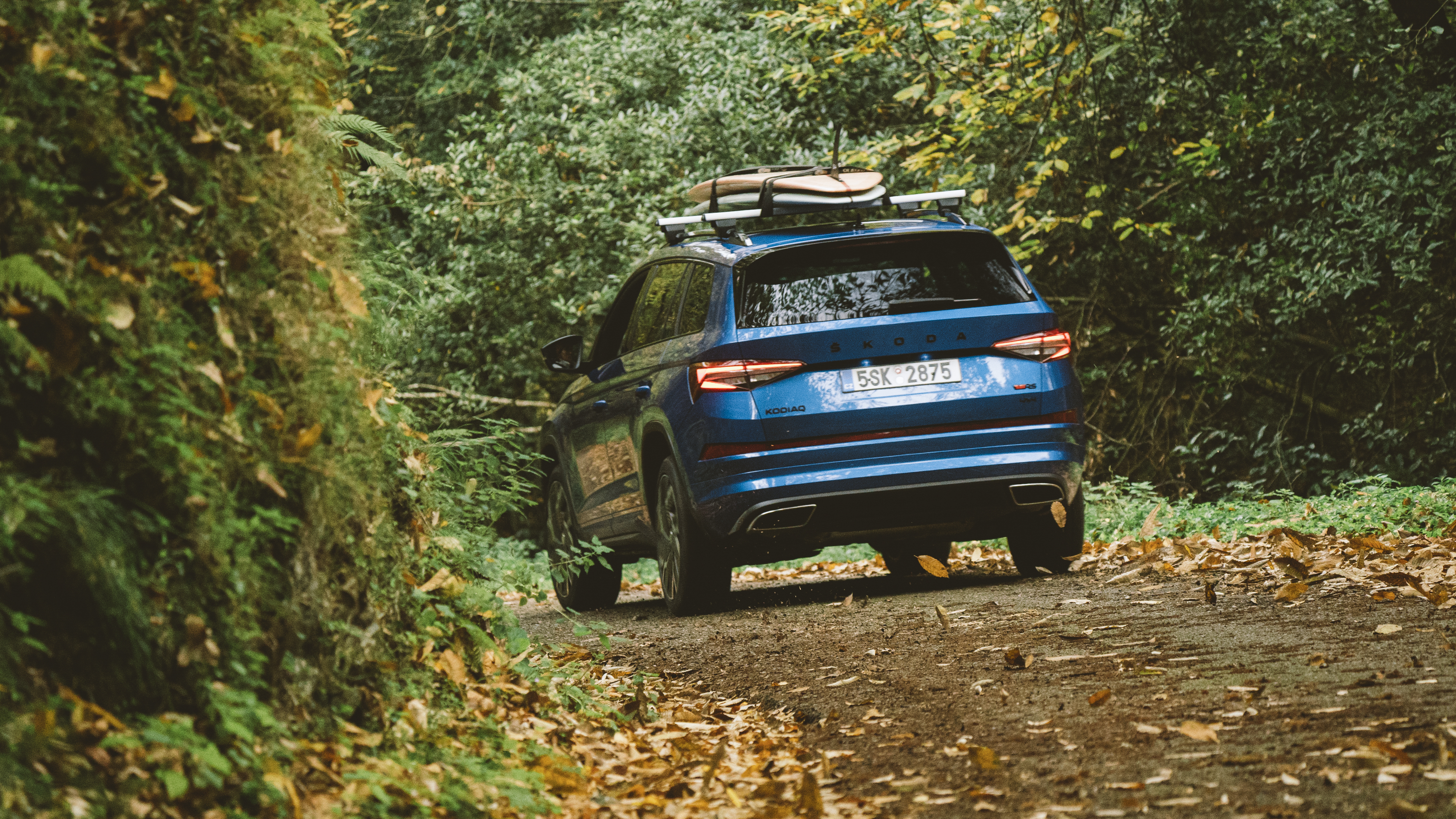 Another of the natural treasures in Asturias are the Covadonga lakes, which are part of the Picos de Europa National Park and consist of two large lagoons of glacial origin, Enol and La Ercina, together with a smaller lagoon, El Bricial, which only has water when the snow melts. The largest of the lakes, Enol, is 1,000 metres above sea level, while La Ercina is another 100 metres higher. In addition to the looming mountain peaks, the numerous herds of grazing cows give the place a breathtaking, almost alpine atmosphere. Don’t miss the Buferrera manganese and iron mines or the holy grotto with its image of the Virgin Mary, donated by the cathedral in Oviedo in 1778 after a great fire destroyed the previous wooden shrine. 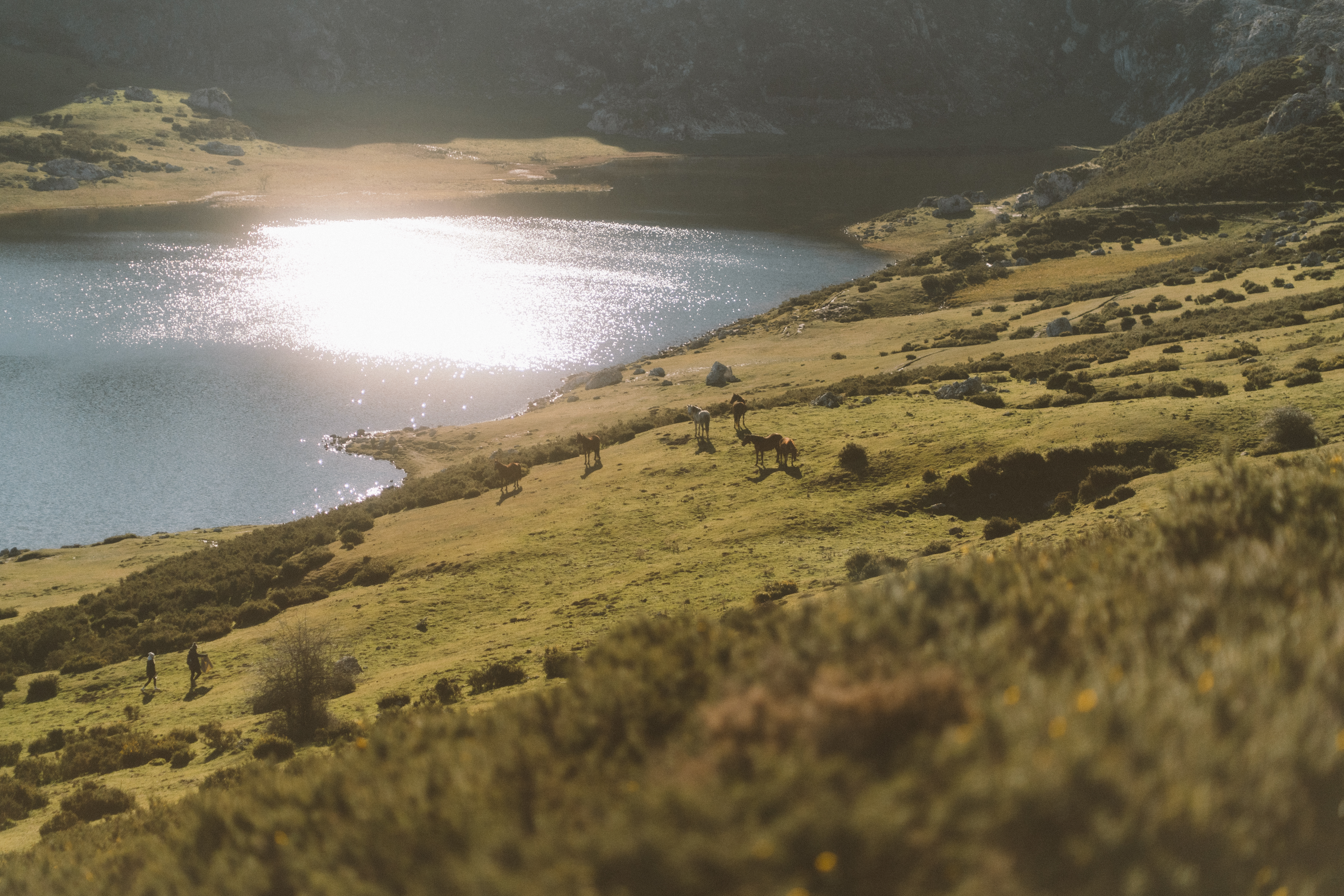 The scenery around Covadonga Lake is wonderfully romantic.

The Basílica de Santa María la Real de Covadonga in the municipality of Cangas de Onís is a complex with a holy tomb and a basilica that commemorates the Battle of Covadonga in 722 AD, the first major victory of the Christian forces in the Iberian Peninsula. The victory secured the independence of the Kingdom of Asturias and essentially ensured the survival of Christianity in northern Iberia. And because this victory marked the first step in the restoration of Christian rule in the Iberian peninsula, it’s fair to say that it’s where the Reconquista began.

Surfboard on the roof

Even if you aren’t going to catch a wave as tall as a multi-storey apartment building, going to Portugal and Spain for a surfing adventure is well worth it. But how should you transport all your gear and, most importantly, your surfboard? A sensible option is to rent a board on the spot. But if you can’t do without your favourite board, then the safest thing is to carry it on the roof. Surfboards can be tied directly to the cross-bars, but an even better and safer alternative is a special rack designed especially for surfboards. 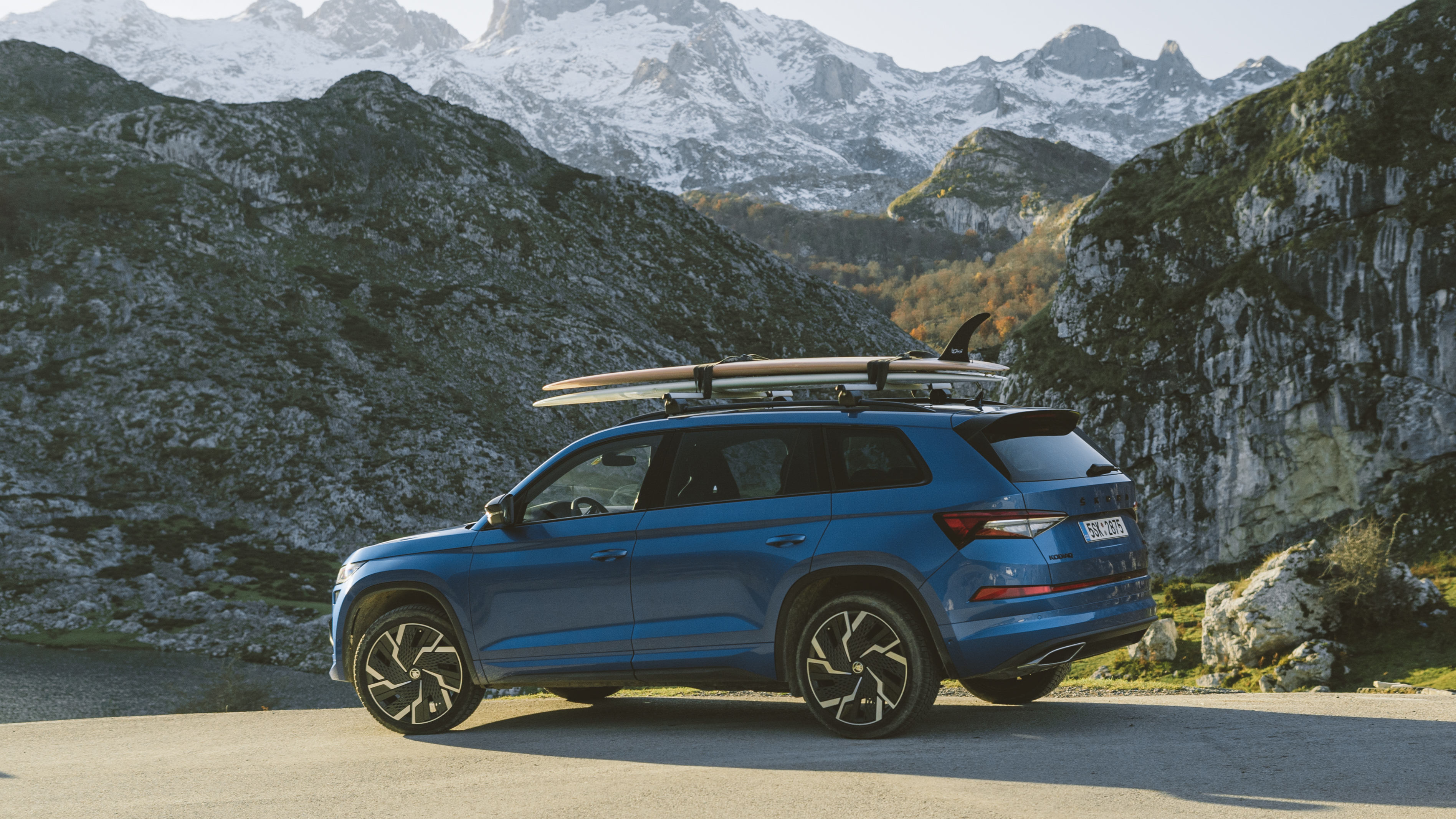 One of the most picturesque parts of Cantabria, with a string of beaches, an old village and the snow-capped peaks of the Picos de Europa in the background, is San Vicente de la Barquera. Originally a fishing village, it has many sights worth seeing, such as the church of Santa María de los Ángeles, which was built from the 13th to the 16th century, the local castle and the remains of its fortifications. One typical feature are the local bridges, such as the Maza, with 28 arches built at the behest of the Catholic monarchs in the 16th century, or the Parral bridge dating from the 18th century. And the local beaches, with poetic names like Fuentes, Primera de San Vicente, El Rosal, El Tostadero, Merón or Gerra, will stay in your memory and your heart for a long time. Be sure to try the local fish and seafood-based cuisine: for example, the speciality called sorropotún, which is a tuna and potato ragout. 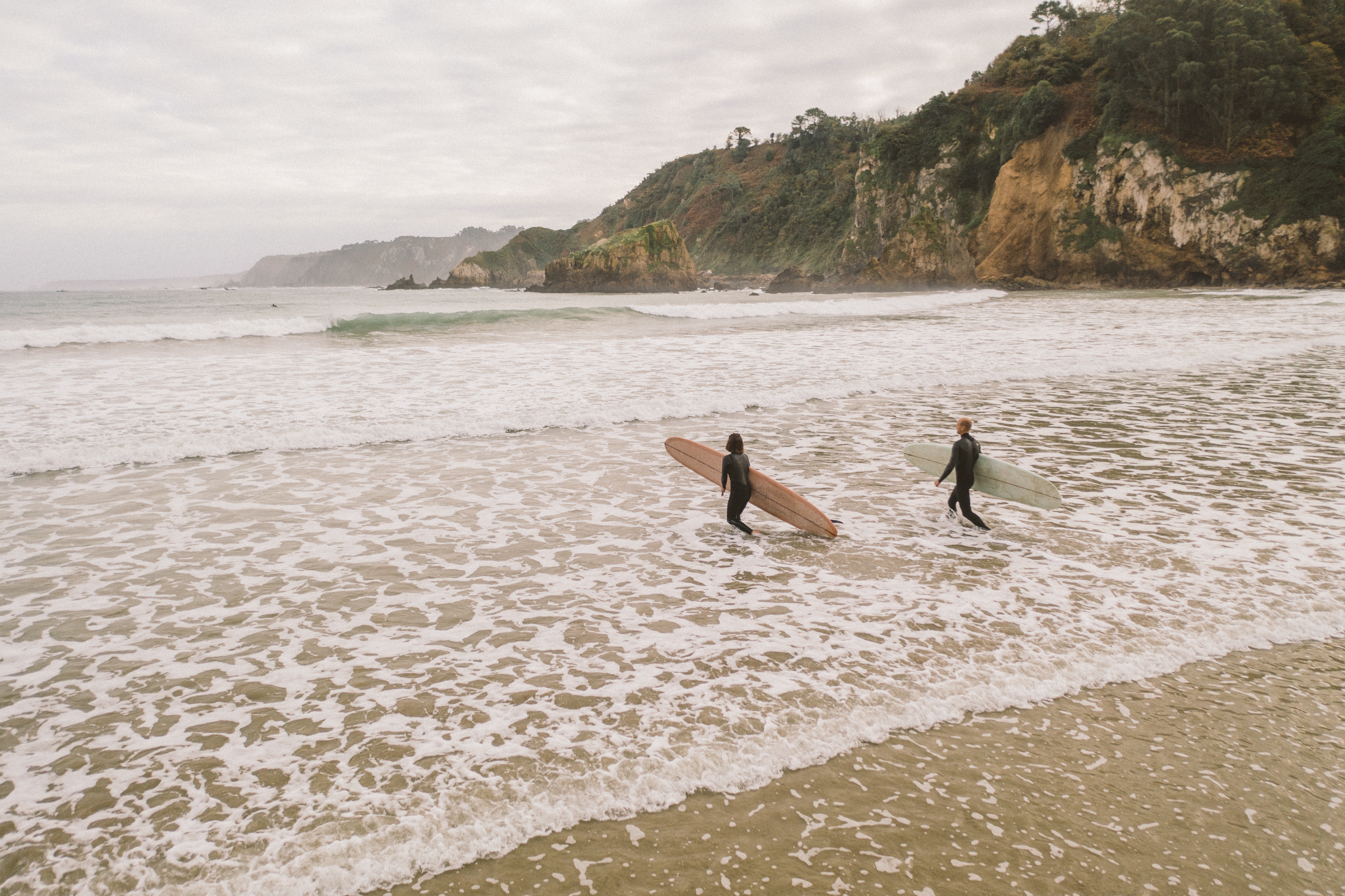 Cantabria’s wealth of beaches include lots of ideal surfing spots.

One of the most beautiful regions in Spain, Asturias nestles between the waters of the Bay of Biscay on one side and the high peaks of the Cantabrian Mountains on the other. Besides the mountains with their deep valleys, gorges, caves and crystal-clear streams and rivers, the beautiful coastline is also worth mentioning. It stretches for some 350 kilometres and is characterised by steep cliffs and a surprisingly low number of natural harbours. Even so, there are countless fabulous fishing villages and beautiful and clean sandy beaches for tourists to enjoy. A surfboard is almost mandatory equipment here. It’s not much of an exaggeration to say this coastal region could be compared to New Zealand: gently undulating landscapes, hedgerows, wooded hills and gurgling streams. The entire Asturias region gets a lot of rain, so there’s no doubt which colour reigns supreme. After all, part of the coast is called La Costa Verde, or the Green Coast. 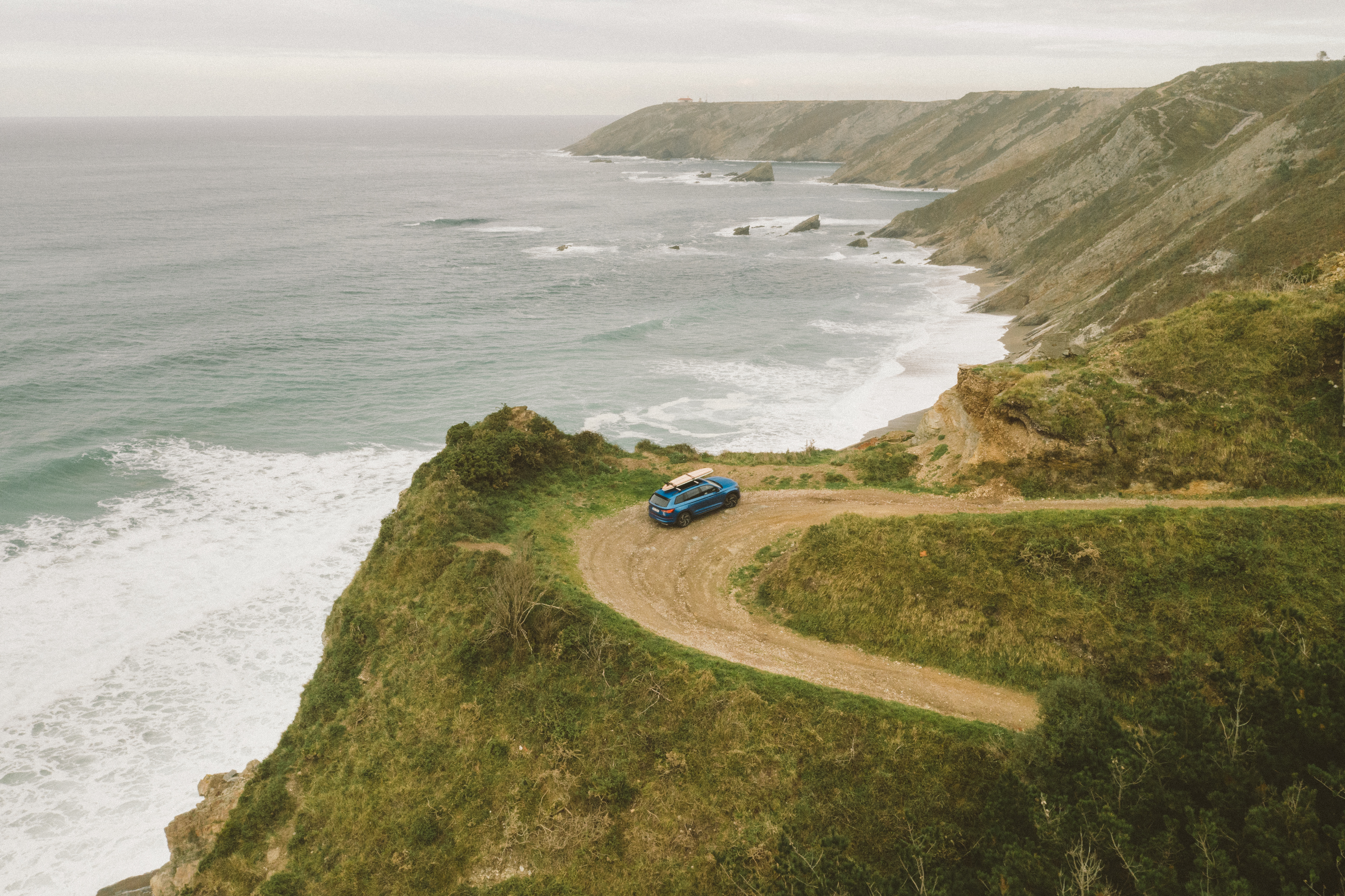 The Green Coast of the Bay of Biscay

Surfer and yoga instructor Ambre-Victoire and photographer and filmmaker Aljaz Babnik, who explored part of the Iberian Peninsula in three ŠKODA models, make a living creating content for surf brands. They combine their commercial activities with charity projects, so it’s no wonder that their exhibitions on ocean conservation, for example, have been seen as far and wide as in Japan, Indonesia, Brazil, the USA, Germany, France and Hawaii. 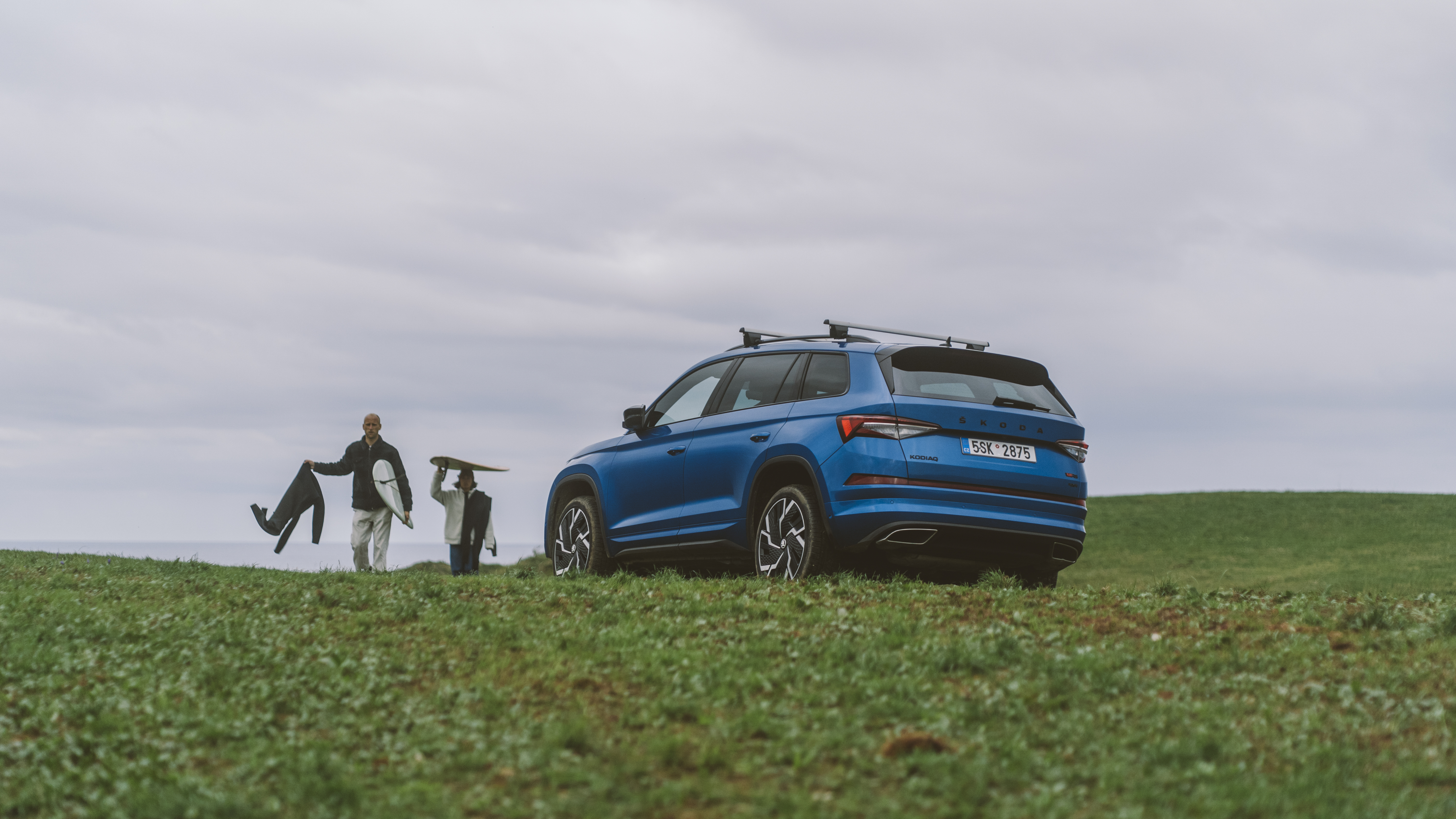 Next up in Road trip series

ROAD TRIP IN ASTURIAS: FROM BEACHES TO HIGH PEAKS 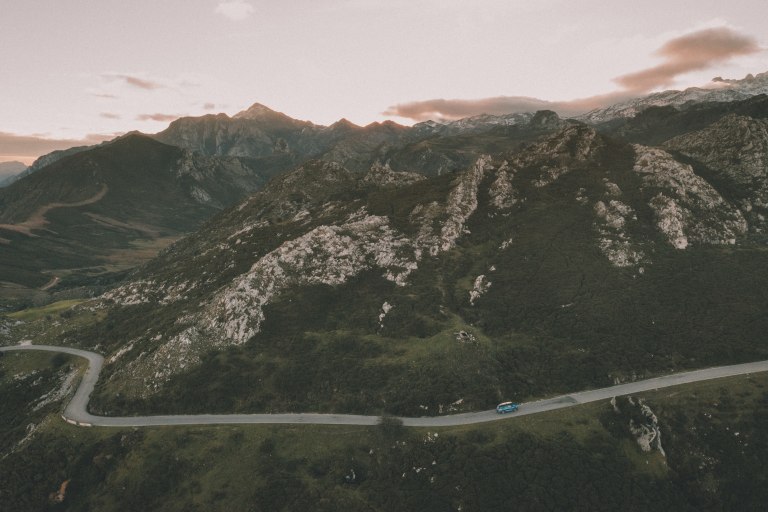 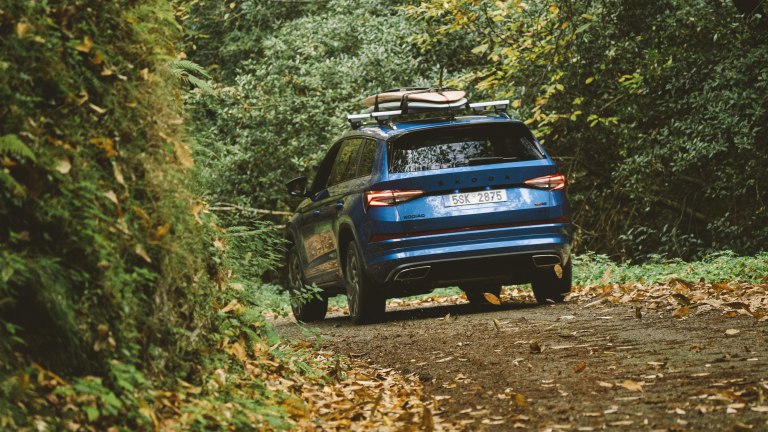 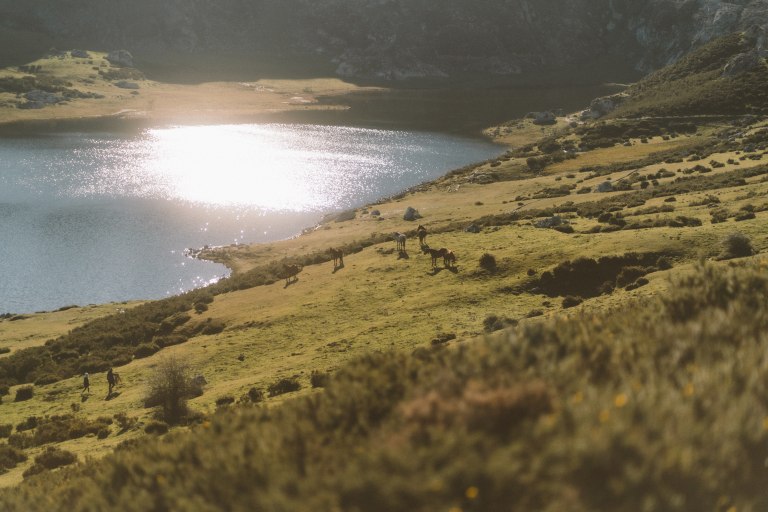 The scenery around Covadonga Lake is wonderfully romantic. 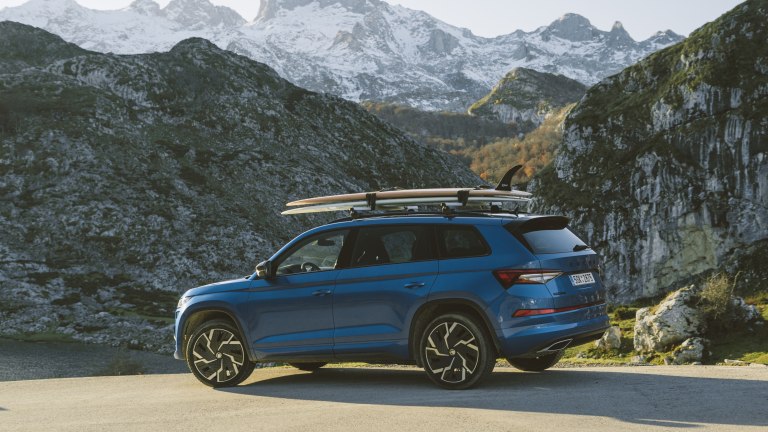 Surfboard on the roof 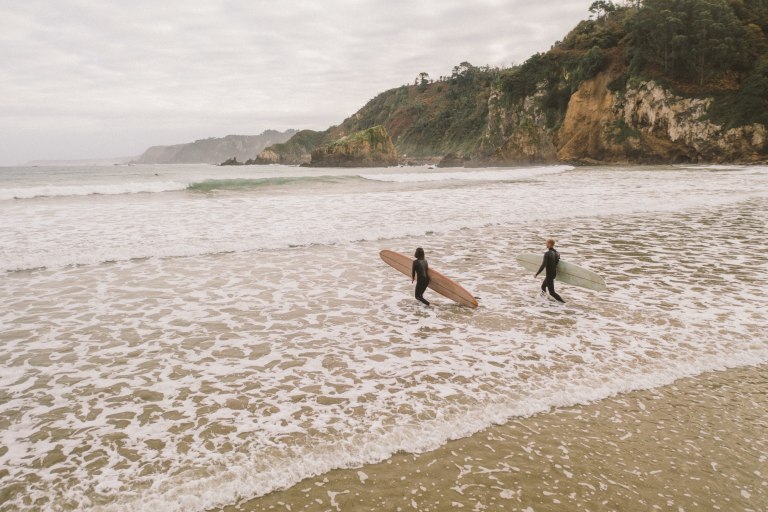 Cantabria’s wealth of beaches include lots of ideal surfing spots. 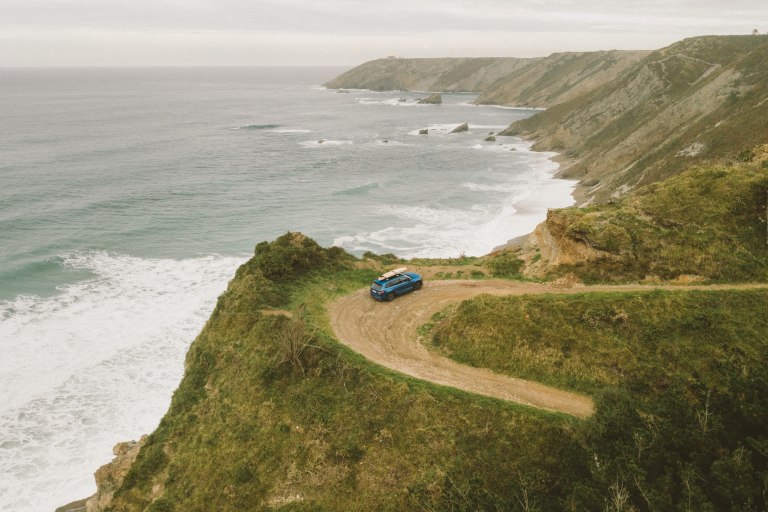 The Green Coast of the Bay of Biscay 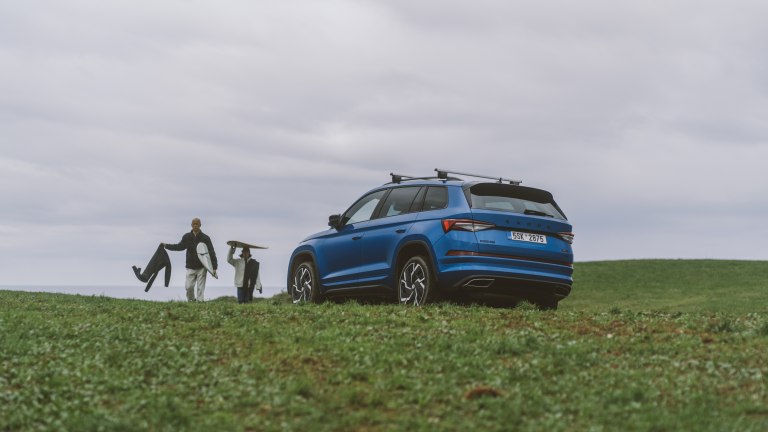