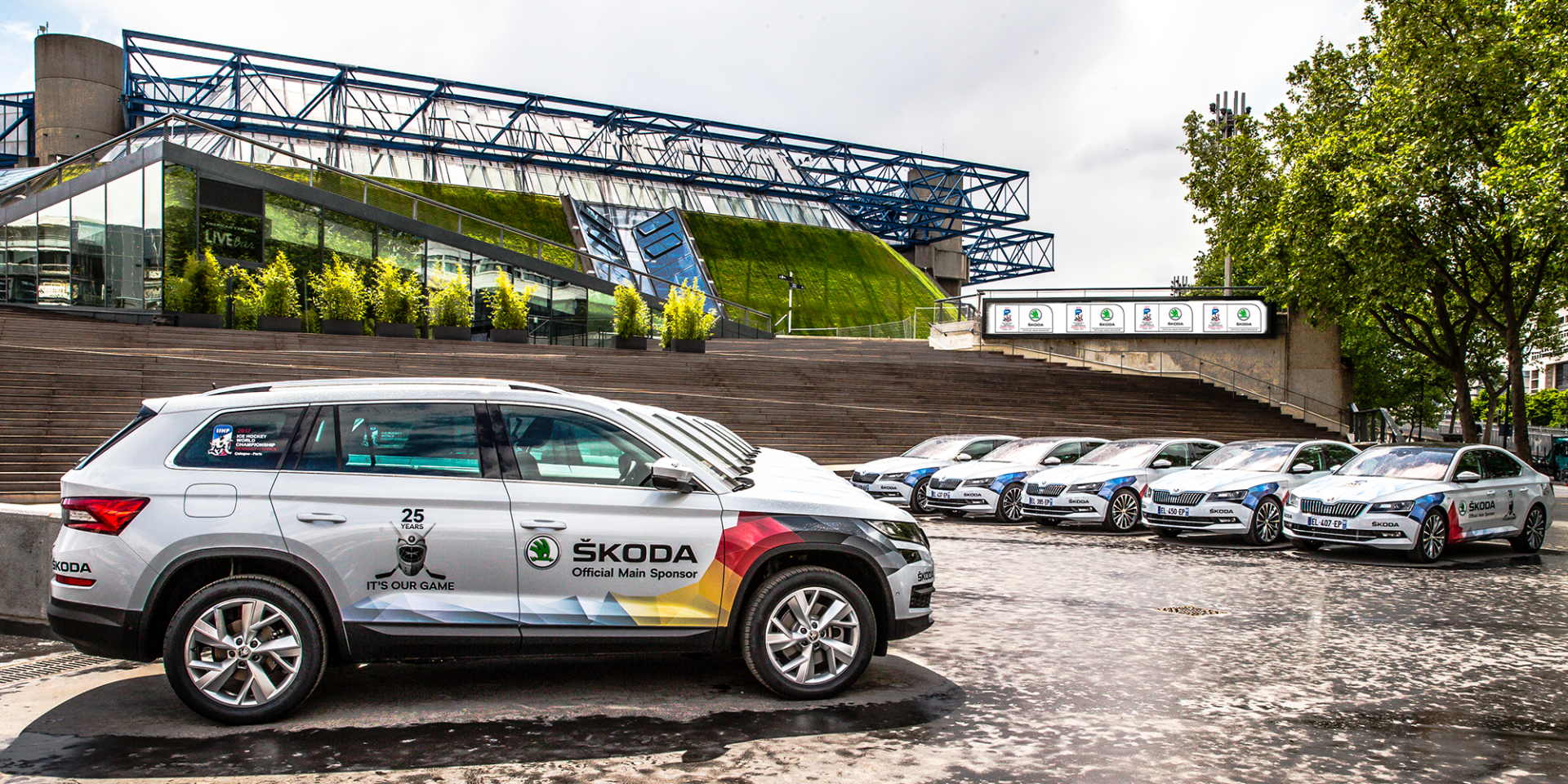 This year, ŠKODA celebrates its 25th anniversary as a significant partner with the International Ice Hockey Federation. Come see what the fuss over this silver anniversary is all about!

A SILVER ANNIVERSARY FOR A GOLDEN PARTNER

In the hockey world, 25 years is a long time. Over a quarter of a century, hockey strategies change, equipment improves, players retire and new superstars emerge. Newly formed countries, such as the Czech Republic and Slovakia, have joined the International Ice Hockey Federation, battling alongside longstanding members such as Canada to prove their worth in the World Championship. However, one constant in international hockey has been ŠKODA, who is celebrating its 25th anniversary as one of the most significant partners of the IIHF.

On May 19th, dignitaries of the hockey world met to not only celebrate the Silver Anniversary ŠKODA’s partnership with hockey’s international governing body, but to announce a four-year extension of ŠKODA’s sponsorship. This partnership is not one taken lightly. According to Bernhard Maier, CEO of ŠKODA AUTO c.s., ŠKODA approaches the sponsorship, “just like in a good marriage, [which] takes a lot of trust, mutual respect and reliability.”

The event, which was held as part of this year’s annual IIHF World Championship, highlighted ŠKODA’s long-standing commitments to the greatest sport on ice, as well as the auto manufacturer’s significant logistical and financial support. 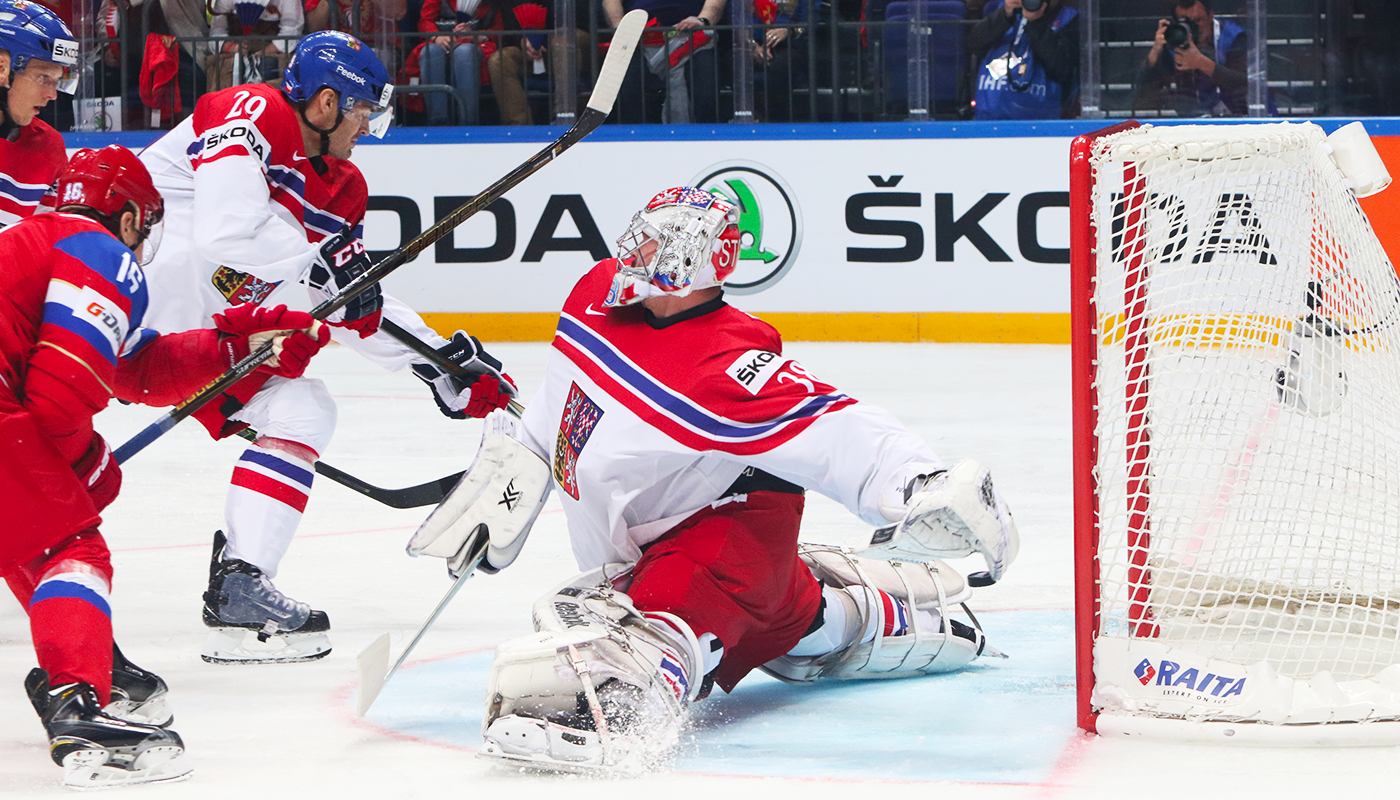 As Dr. René Fasel, the President of the International Ice Hockey Federation notes, “ŠKODA has always been a very reliable partner,” and not just for its monetary contributions. “ŠKODA has provided solutions to transport challenges, that such a large operation has. And this even in countries, where ŠKODA isn’t usually present, like back in 2008, when the championship took place in Canada, [their] whole fleet was shipped across the Atlantic.”

Fasel continues, “With regards to ŠKODA, the car has become almost an icon of the World Championship, something that you can associate with the event either with the cars on display in the arena or when they are driving around the host city.”

ŠKODA has always been a very reliable partner

The resources and logical knowledge that ŠKODA provides make the IIHF’s tournaments run more smoothly. Like hockey player setting up a teammate for a goal, ŠKODA and the IIHF make a wonderful team.

HOCKEY IS OUR DUTY

For ŠKODA, hockey comes naturally. Czechs themselves have had a long standing place in the world of hockey. Representatives from Bohemia (now the modern day Czech Republic) were a part of the founding of the IIHF in 1908, and hockey has remained a national passion for Czechs ever since.

As Bernhard Maier says, “In ŠKODA’s home market, the Czech Republic, ice hockey is a national passion. When I get to my office the day after an international game, I can tell from people’s faces whether the Czech Republic won or lost. Therefore, it’s almost a patriotic duty for us at ŠKODA to support this wonderful sport.”

But ŠKODA is not just a proud supporter of the Czech team, win or lose - they also root for all the other teams. Maier continues, “But in all seriousness: ice hockey really captivates a lot of people in our core markets – for example, the Czech Republic, Slovakia, Germany but also Russia. In addition, it is a dynamic, honest, down-to-earth and – most importantly – enjoyable sport.” These attributes, Maier notes, are also shared by ŠKODA’s corporate culture and vision.

Dr. Fasel also notes that ŠKODA’s generous support extends beyond the flash and pageantry of the World Championships. “The hockey family does appreciate the cooperation, which goes much further than the IIHF WM as ŠKODA also supports many national federations, national leagues, events and youth programs.”

Or as Bernhard Maier says, “To sum it up: ice hockey and ŠKODA go together!” 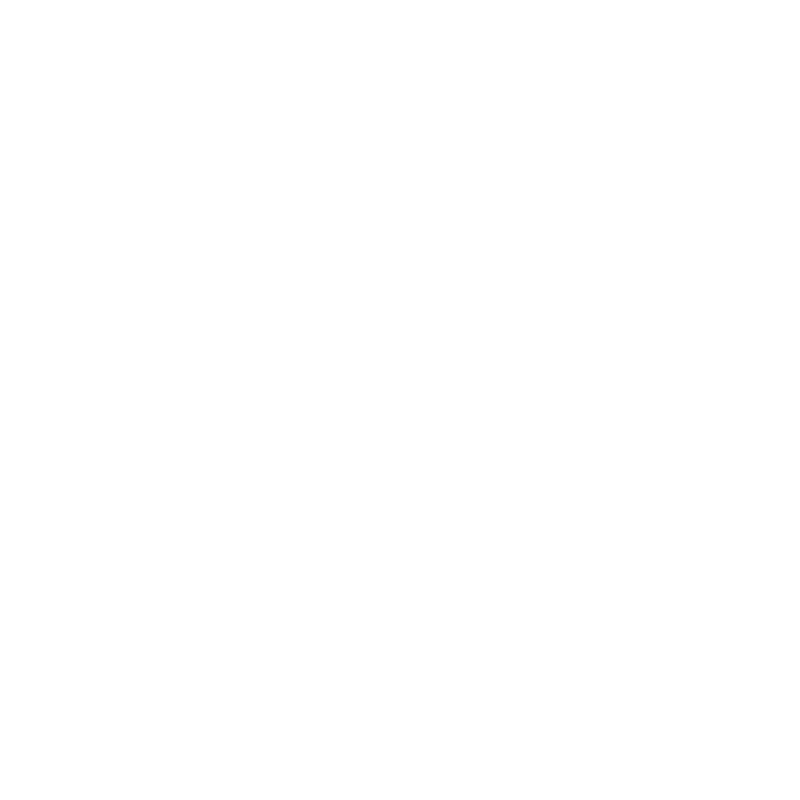 To sum it up:
ice hockey and ŠKODA go together! 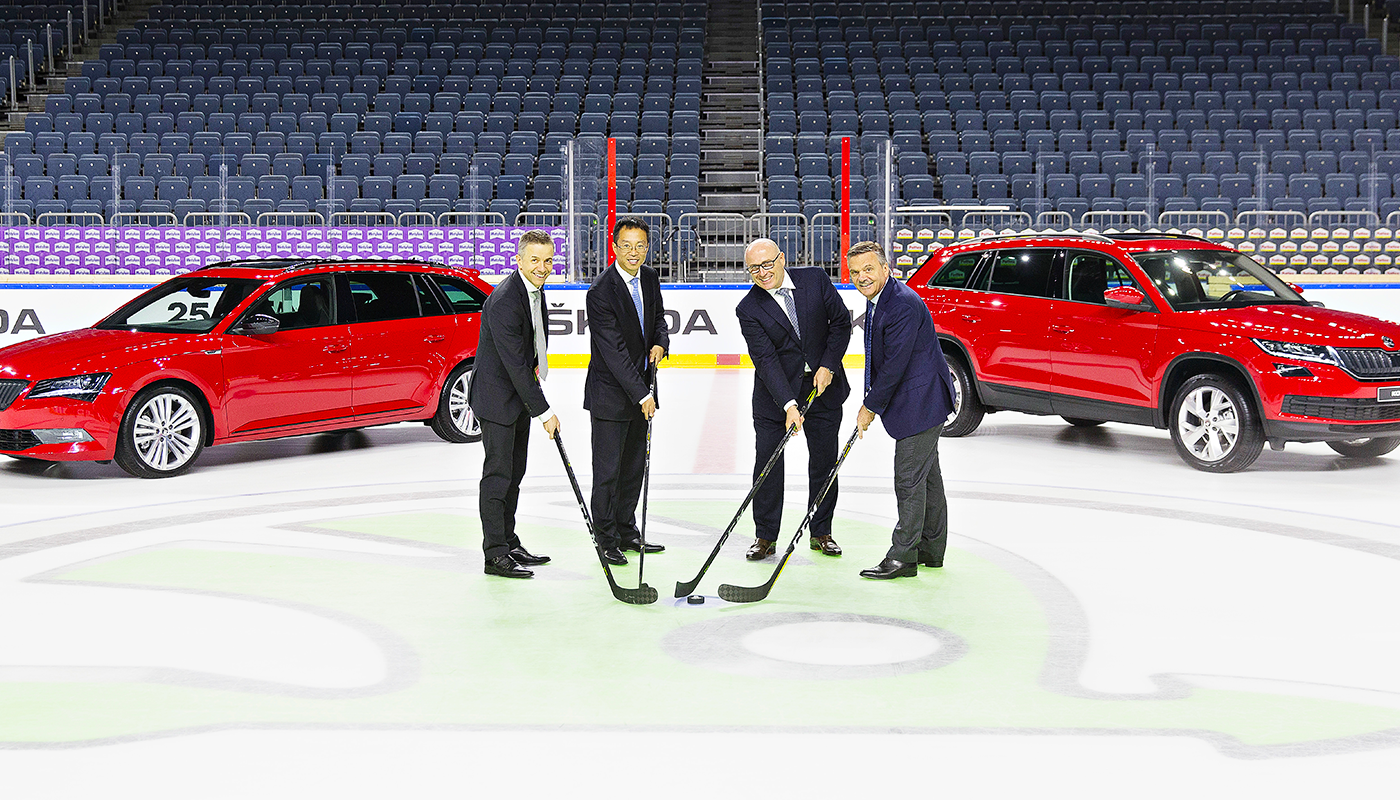 WHAT DOES THE FUTURE HOLD?

With ŠKODA’s announcement that it will continue to be the official main sponsor of the IIHF World Championships through 2021, what does the future hold for ŠKODA and the IIHF?

According to Maier, ŠKODA is delighted at the chance to work closely for another four years with the IIHF, saying “I am convinced that together we will be able to achieve lots more for international ice hockey and for the ŠKODA brand.”

But will ŠKODA rest on its laurels? Maier is sure that the pioneering automaker won’t. “We never expect things to just happen. We will work hard and also continue to be a reliable and supportive partner. But at the same time, we are also an ambitious partner. We are always looking for potential in a partnership and are confident that the IIHF are doing the same.” 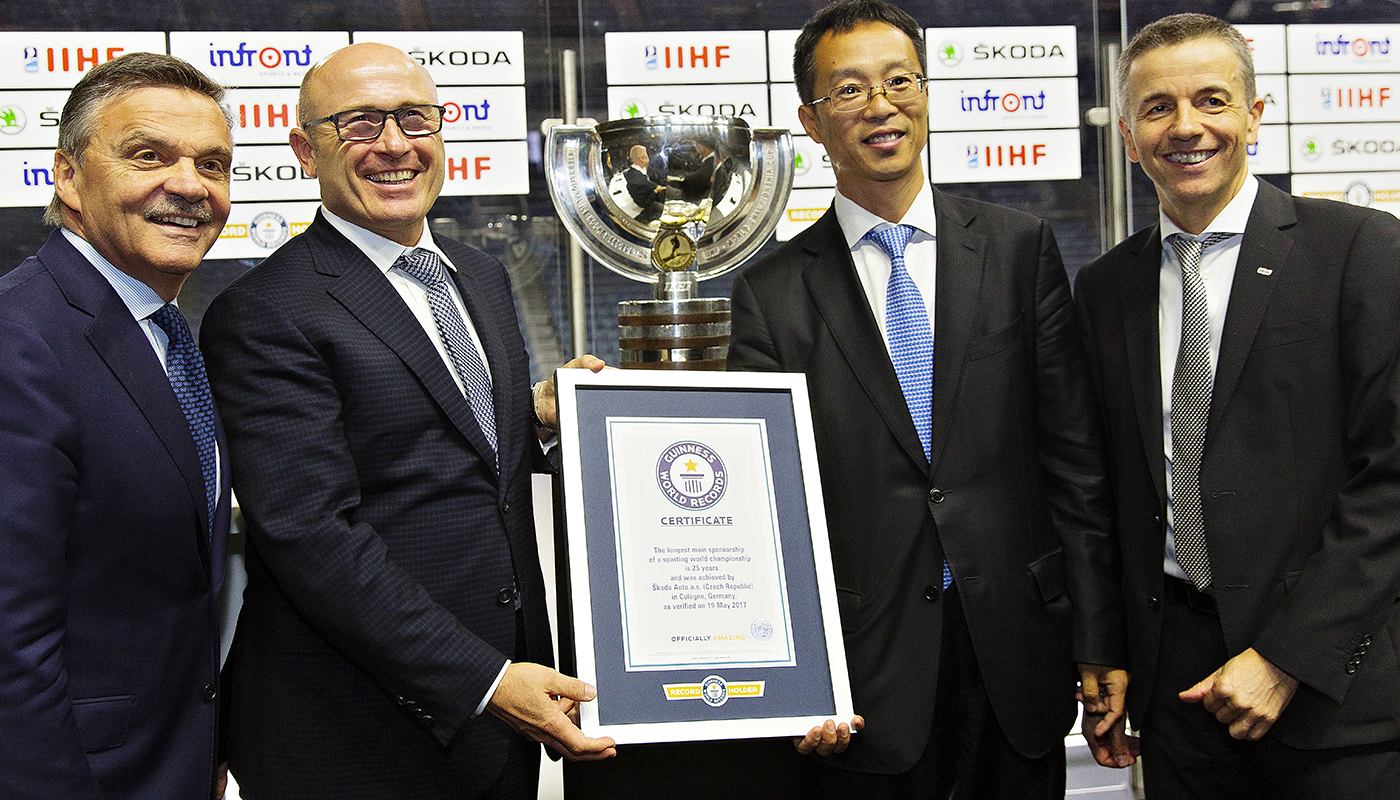 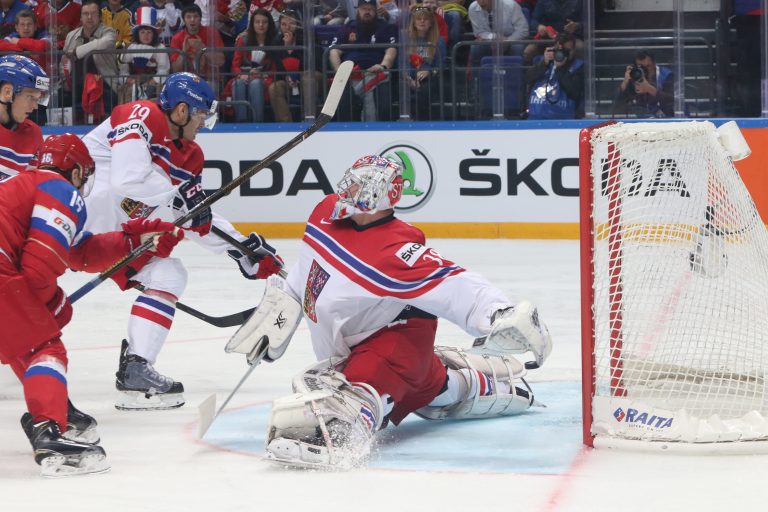 Hockey is our duty 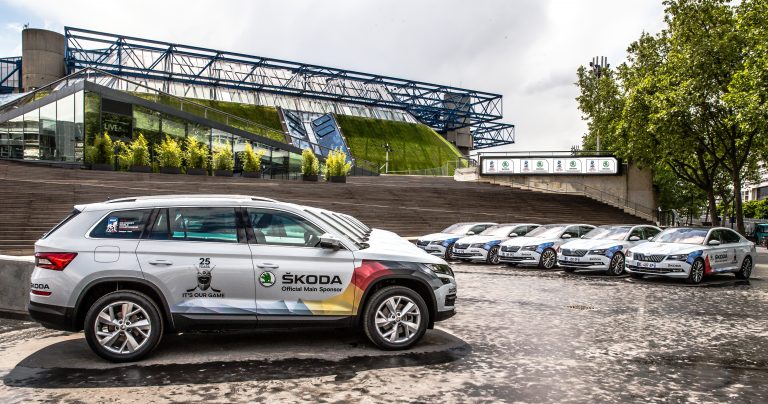 A silver anniversary for a golden partner