In Prague, the Whole World Thought up Future Travel

Hackathon. This word combines two concepts from completely different worlds – computer hacking, i.e. modifying and improving programs, and an athletic marathon. The results of this resourceful discipline are here to change the future. And how did the hackathon in Prague turn out?

ŠKODA AUTO DigiLab hosted Smart Mobility Hackathon 2019 in Prague over the second weekend in April. Programmers from thirteen countries spent forty-eight hours working on ideas about how travel and transportation will look in the future.

It is becoming increasingly difficult to move around in overcrowded cities and we need to address how to reconcile a basic human need – mobility – with ever stricter emission standards, infrastructure options and sustainable development. The way we travel in ten years’ time will be very different from today's modes of transport. Cars will also change significantly. And the hackers gathered to show what that future will look like.

ŠKODA AUTO DigiLab in Holešovice, Prague, has been teeming with people since the early hours. They have come from all over the world, including Israel, the US, Russia, Singapore and China. Some already have a clear idea of what awaits them here and they know what their three-member team will be doing. Others have turned up alone and have yet to join a team. The Germans Nikolas and Laurenz, for example, came to the hackathon as a pair, so they are looking for a third member for their gang. Other teams are hastily trying to find the right “challenge” – the topic they will be dealing with. By 2 p.m. on Friday, all the topics should be distributed, but many teams are still fumbling. However, help is at hand from experienced mentors, employees of companies such as ŠKODA AUTO, ŠKODA AUTO DigiLab, Innogy and Pražská energetika.

“I’ve missed this tonnes,” says Iryna Kasumava from ŠKODA AUTO DigiLab as she enjoys the atmosphere. Having previously participated in several hackathons, she is now a mentor. She finds it so interesting to pass on her experience to young programmers that she has given up a free weekend to join in with the hackathon. 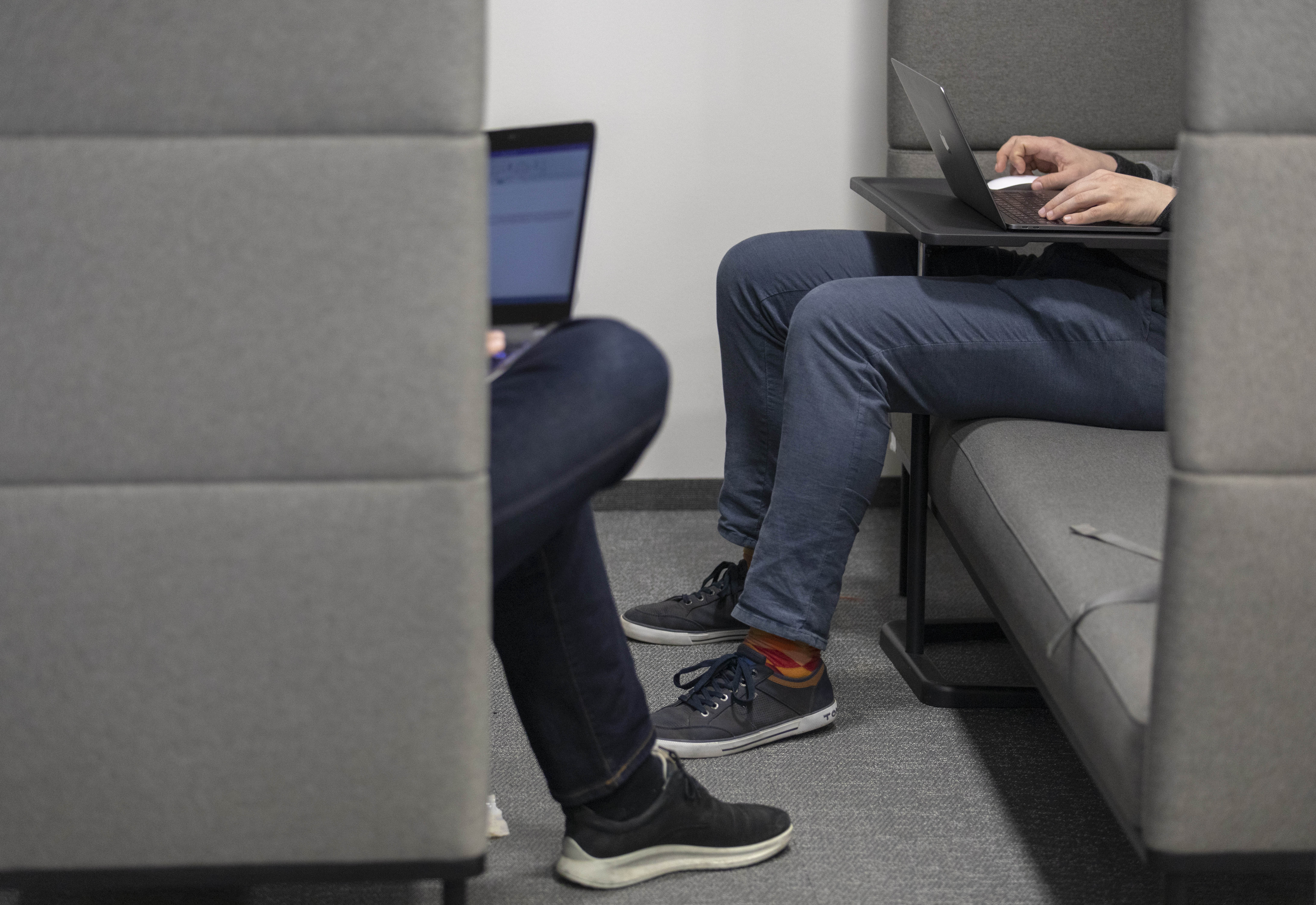 Once the challenges have been handed out, the teams sit at their computers. First, they think about how to approach the solution, and then launch themselves directly into the programming work. This is the start of a marathon of non-stop programming, testing and tweaks. The essence of hacking is to experiment – some ideas have the potential to be developed by the team, while others need to be abandoned quickly so they don’t get in the way of a smoothly-functioning program. This is why a tool-kit has been placed at the teams’ disposal, including a 3D printer and an Arduino hardware set, so that they can rapidly build a functional prototype in situ.

Our Germans, Nikolas and Laurenz, are tasked with developing rear-view mirrors that automatically adjust to provide drivers with a proper view of what is happening behind the car. The idea is that drivers don’t have to go through the rigmarole of changing everything every time they get in a car. Using a 3D printer and other equipment, in a few dozen minutes the team is able to make a functioning model that they can then test in their own car. They burn one set of fuses, but the model works!

The Maasters Chinese-Czech team focused on devising a complex algorithm for calculating the value of a used car after several years’ operation, and on whether it is more cost-effective to keep driving that car, to lease a new car, or to opt for a carsharing service. They were able to program this predictive model with a set of real-world used-car data provided by a large car dealer as one of the event partners. 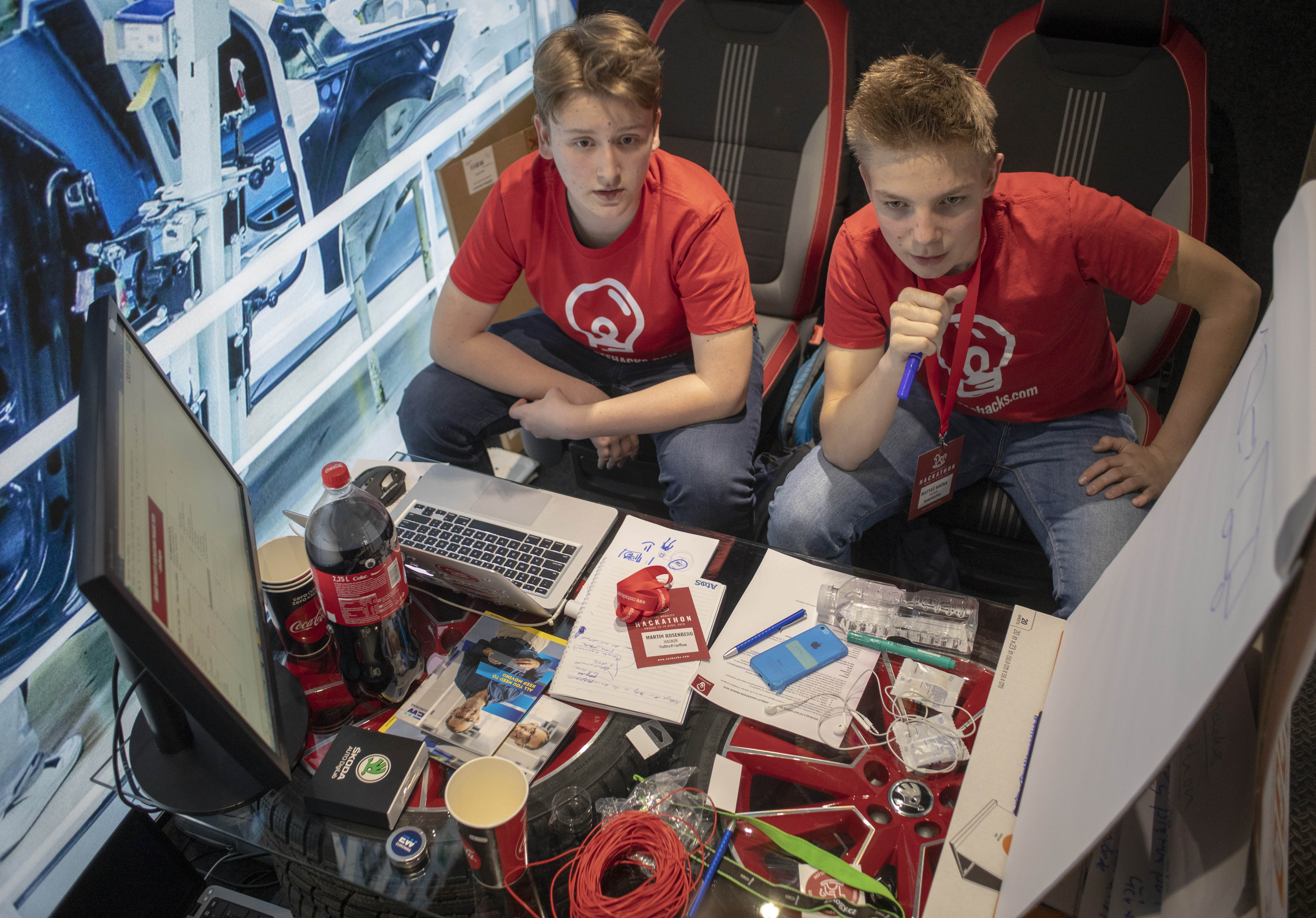 WHAT IS A HACKATHON?

In the past, hacking had negative connotations. Hackers were viewed as cyber raiders who tried to break into the computer systems of large banks or state institutions from outside. However, over time, companies realised that they could harness the potential offered by hackers and turn it to their advantage. Consequently, these days firms hire enthusiastic programmers to either try to break into their systems intentionally, as a way of detecting security bugs, or to develop something new, unexpected, original, that the company could take and use in its product and service portfolio.

THE MAGIC OF PITCHING

After dozens of hours of programming, you can see fatigue and exhaustion starting to set in – most teams use Saturday to take a breather. They catch up on sleep following Friday’s tough work because they know that the worst part still lies ahead – on Sunday they will have to pitch the results of their weekend efforts.

The contrast is incredible – after 48 hours of programming, each team gets just five minutes on a stage in front of the judges in order to sell their ideas. This pitch is a special discipline embedded in the startup and technology environment. It is an opportunity for the people behind a program or a service to grab investors’ attention and convince them to channel funds into the project. The persuasiveness of the pitch will decide whether or not investment will be forthcoming. In the Czech Republic, it is probably the TV show “Hour of Truth” where the pitch has become most famous. 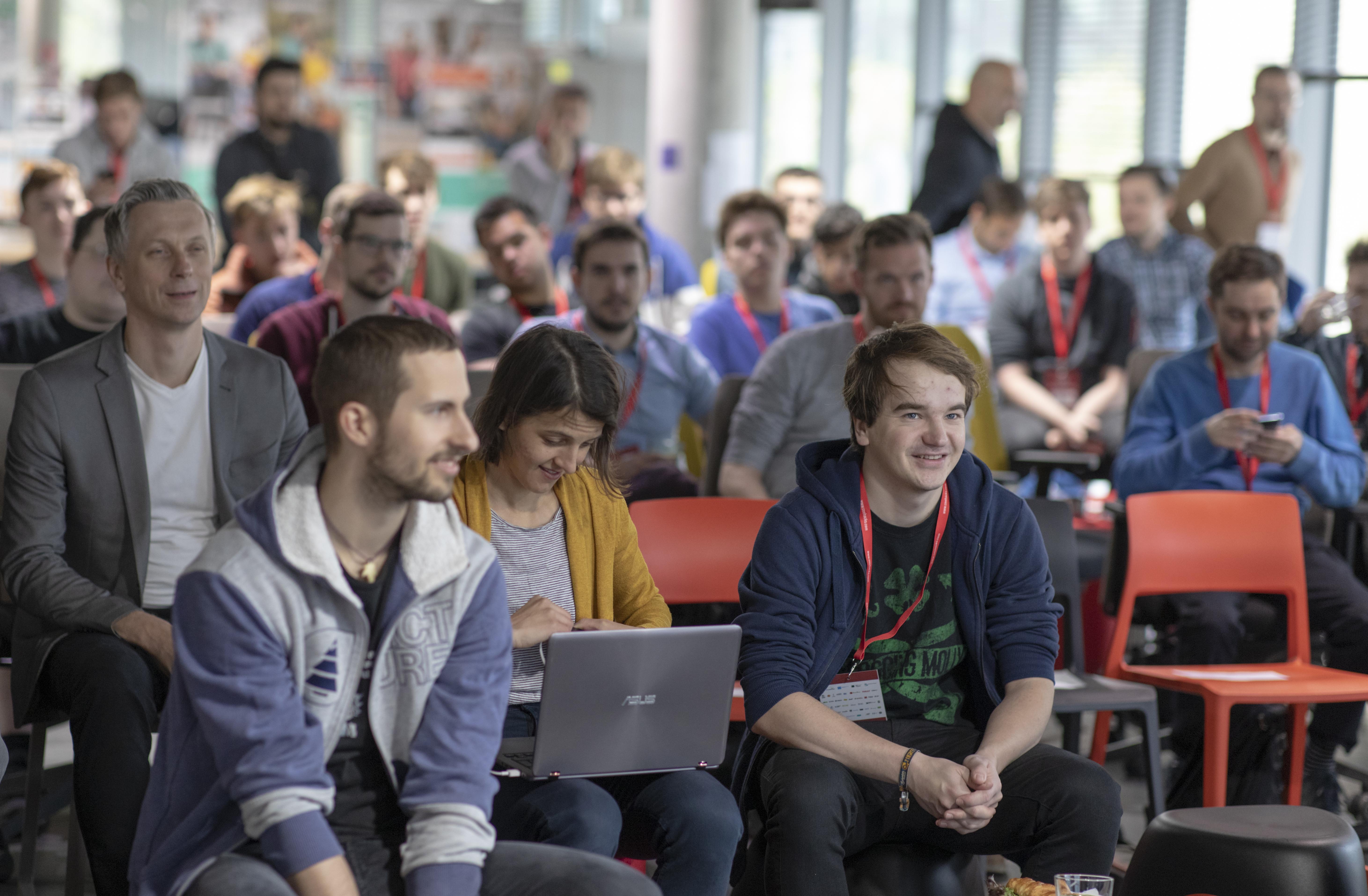 Start of Smart Mobility Hackathon 2019. The teams learn about the challenges and think about what solutions they will start to develop.

The teams’ five-minute presentation is actually a luxury – the ultimate objective is the “elevator pitch”, i.e. the ability to win over investors after bumping into them in a lift, ideally within a minute or so.

The teams are now gearing up for their five minutes of truth – they are preparing thoroughly in the historical setting of Prague’s Old Town Hall. They all have their own techniques – some film themselves on their phones; others practise quietly in a corner. It is important to convince the jury, in five minutes, that their project is sufficiently innovative and technically sound and that it has business potential. Pitching to an audience is a lot different from coding and preparing a project – the hackers are clearly nervous about making a public presentation. 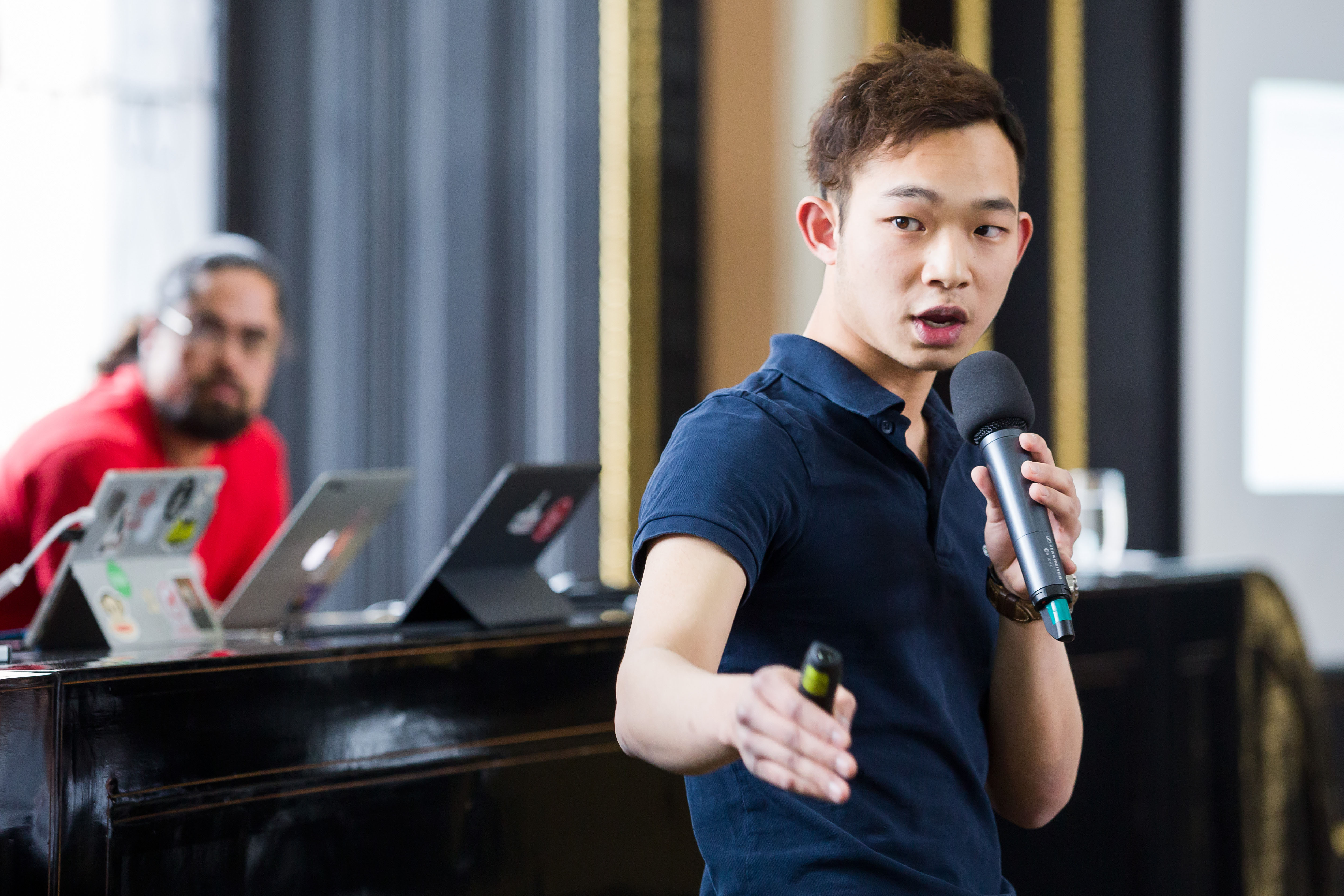 The winners are selected based on how well they can pitch their project to the judges in their allotted five minutes. Presentation skills are therefore a special discipline that needs to be honed.

Yoav Volloch, who flew in from Israel to take part in the hackathon, praises the hackathon atmosphere just before his pitch. “I’m getting on a bit these days, but the hard work put in by everyone around gave me and my team the lift we needed to perform well,” says Volloch.

The truth of the matter is that the team he came with doesn’t really fit in with the others – most hackers are still at college, or even high school, but Yoav has a long career behind him. He set up his own business before selling it to an American company, and now he is striking out on his own again with a start-up, AiGENT-TECH. The team members are his employees and have years of experience from working at Israeli universities and international companies.

They all worked with vigour for the full 48 hours to build a project that calculates optimal carsharing routes and sets prices dynamically in order to make the most of the entire fleet of cars at all times and ensure it is available in the right places.

AS THE MOOD TAKES YOU

When the teams finally appear before the judges, it is clear that the projects are extremely sophisticated and offer a wide range of options. One of the projects is an emotional route planner. Feeling romantic? It will prepare a programme consisting of a bike ride and a romantic dinner. In a hurry? It plans a route based on the time available.

Other teams try to impress the jury with sophisticated samples and prototypes. Nikolas and Laurenz demonstrate a prototype for their smart mirrors in a series of videos. The judges are so interested that they eventually place second. Advanced navigation for electric vehicles and a project for bus stops that double up as interim storage points for the delivery of goods on electric bikes also aimed high.

The jury is made up of renowned industry experts. Professor Michael Šebek chairs the jury, which also comprises ŠKODA AUTO DigiLab boss Jarmila Plachá and managers from other partner companies. The decision-making is not easy, as everyone has put their all into the preparation of their projects. But a decision there must be. The Herfat Father team, developing the emotional routing app mentioned above, was named the overall winner. It was a very close-run race, with other teams enjoying a share of the spoils from the sponsors. For example, the Maasters Chinese-Czech team present its idea at the prestigious EcoMotion Week conference in Israel, which specialises in mobility and transport. This award was prepared by ŠKODA AUTO DigiLab with a view to developing the solution, where appropriate by drawing on cooperation with other partners and startups in Israel. The Maasters team finished third overall. 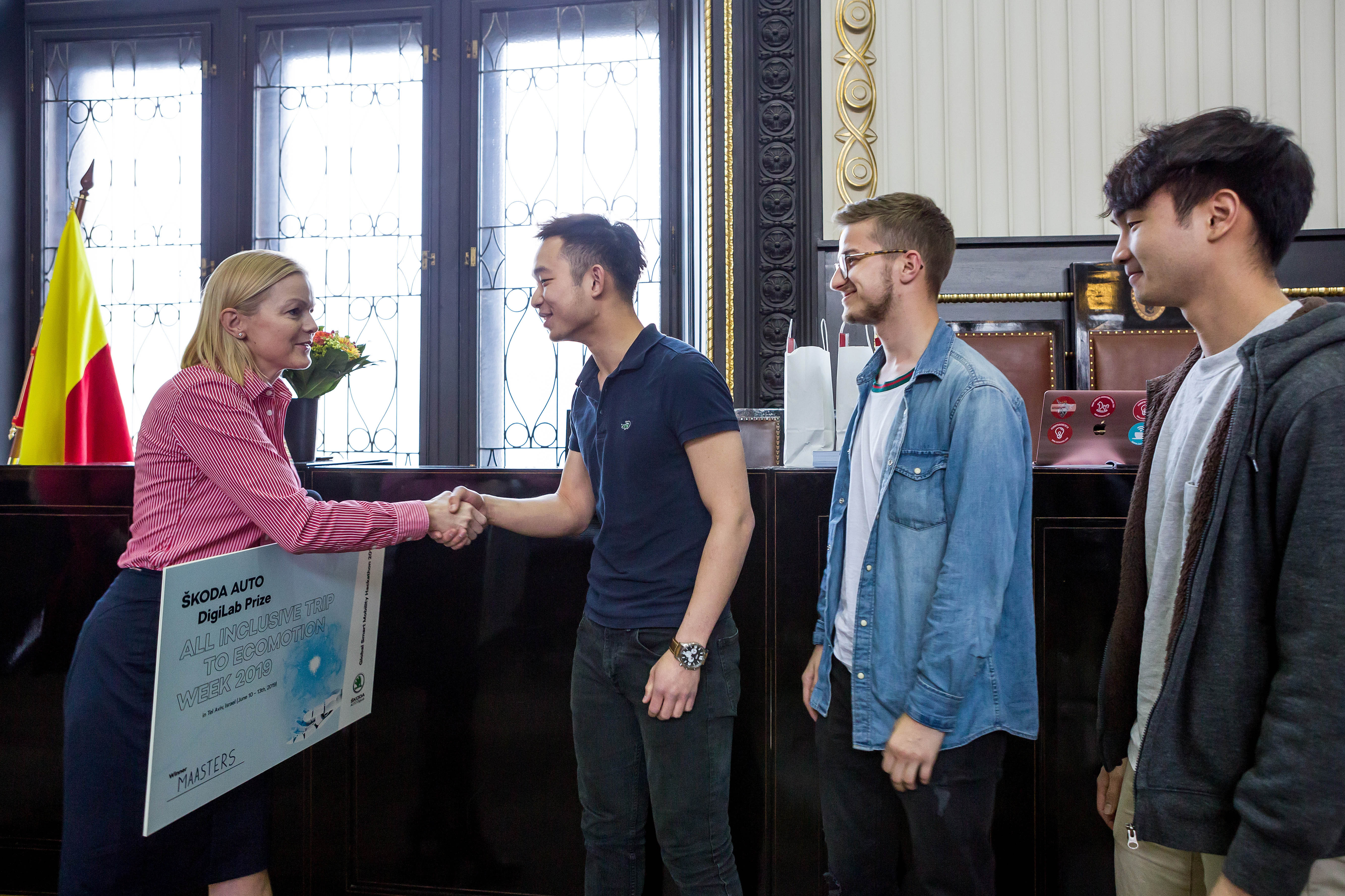 “For me, Smart Mobility Hackathon was one big parade of IT talent from 13 countries around the world. I am pleased that developers and hackers from the Czech Republic also left their mark! We will keep track of the projects created at the hackathon. We will develop those offering us the most potential at one of our established branches in Prague or Israel or at our new branch in China,” says Jarmila Plachá, head of ŠKODA AUTO DigiLab.

Regardless of the prizes, there was one thing on which all of the hackathon’s participants agreed: it was well worth 48 sleepless hours and they will be coming again. 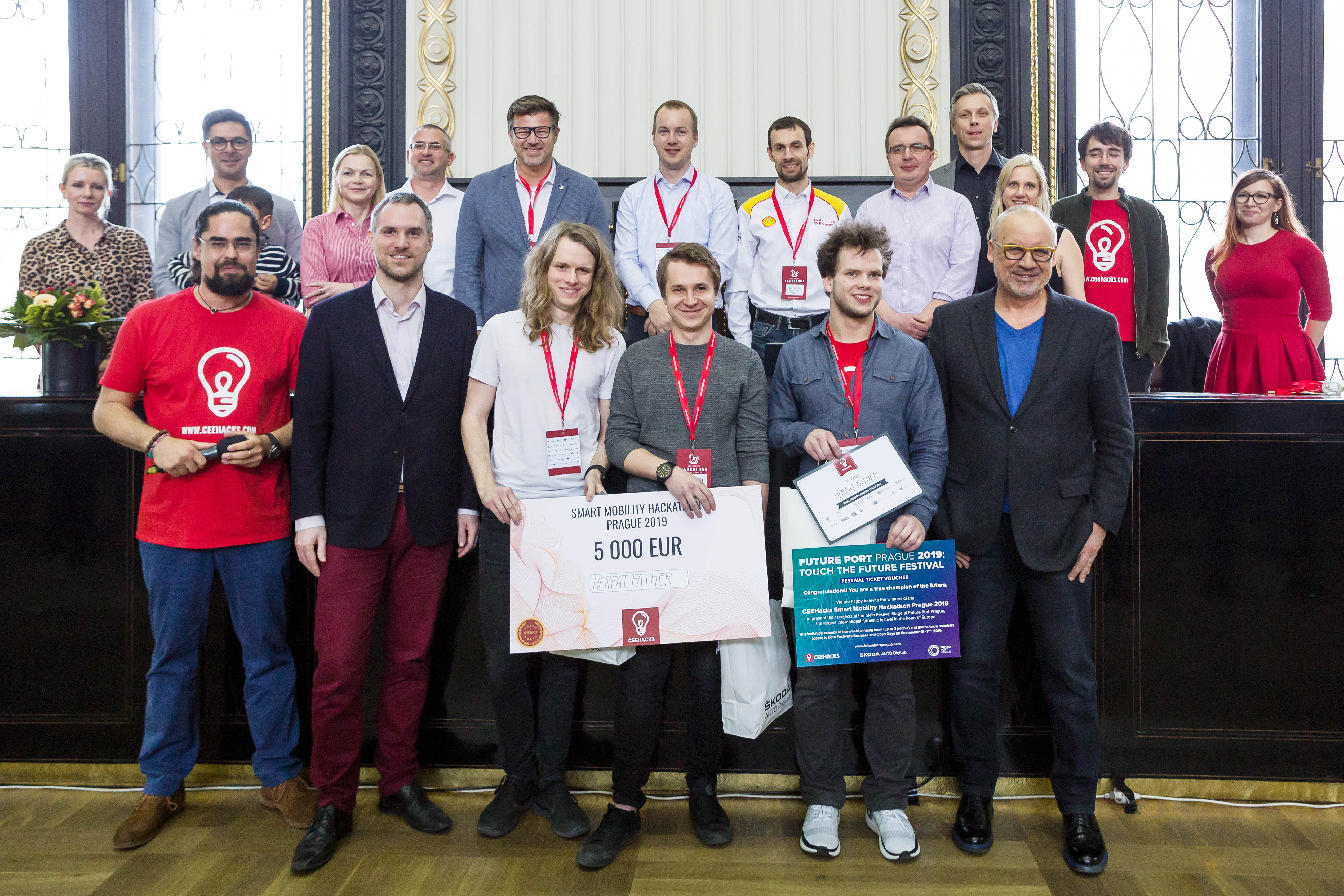 Vision of a Digital Future 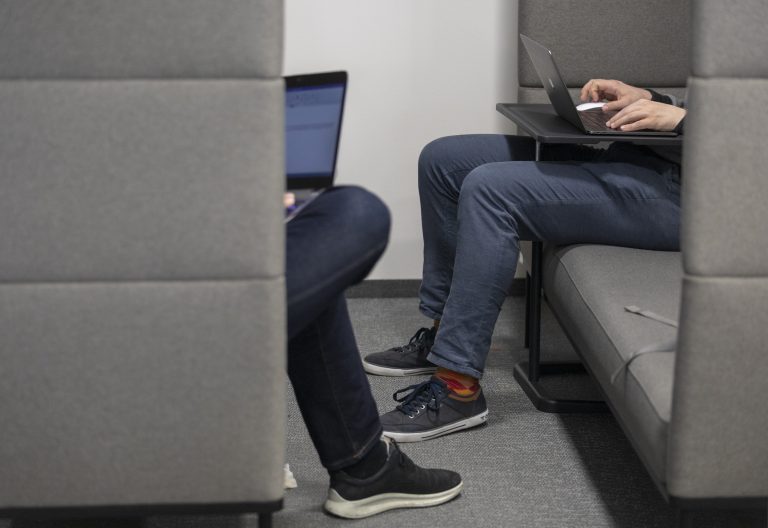 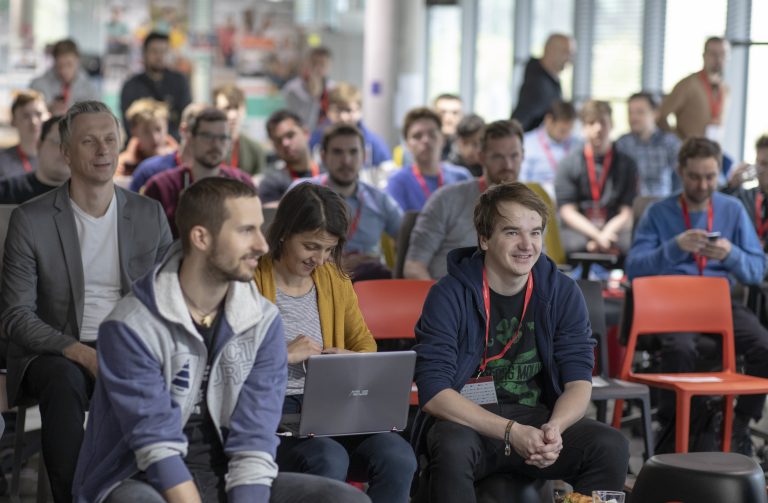 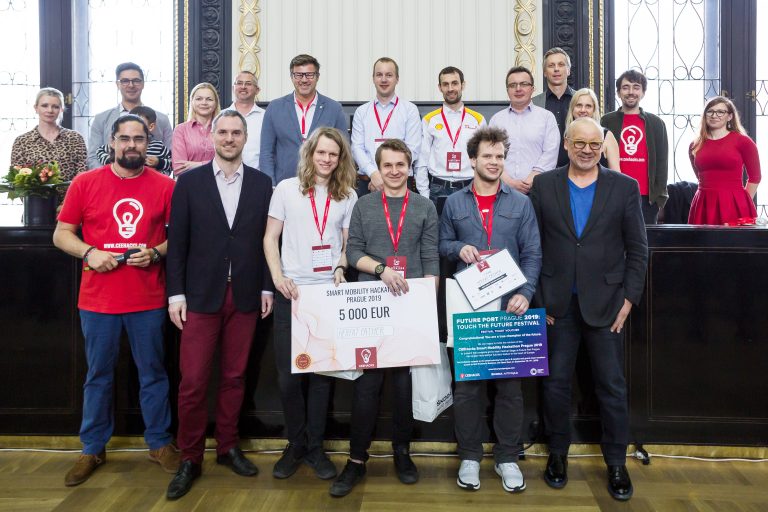 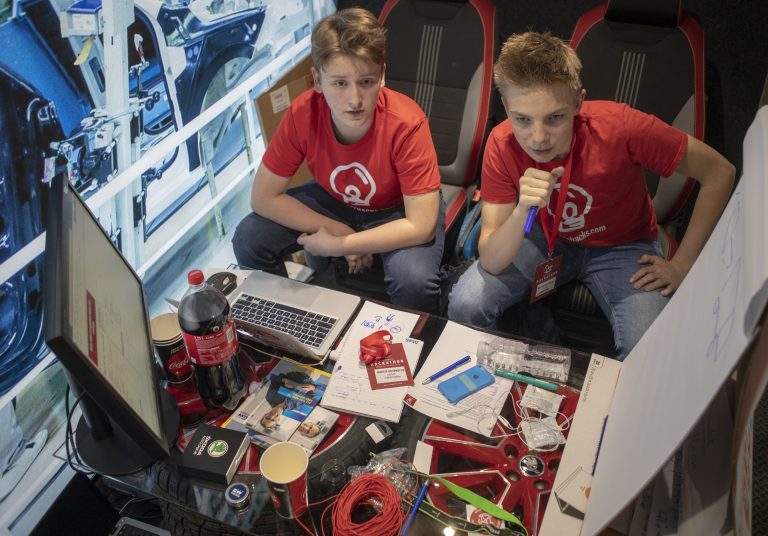 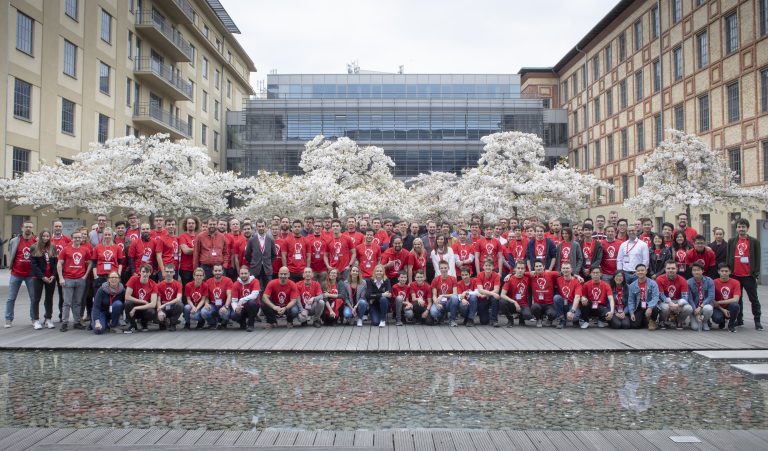 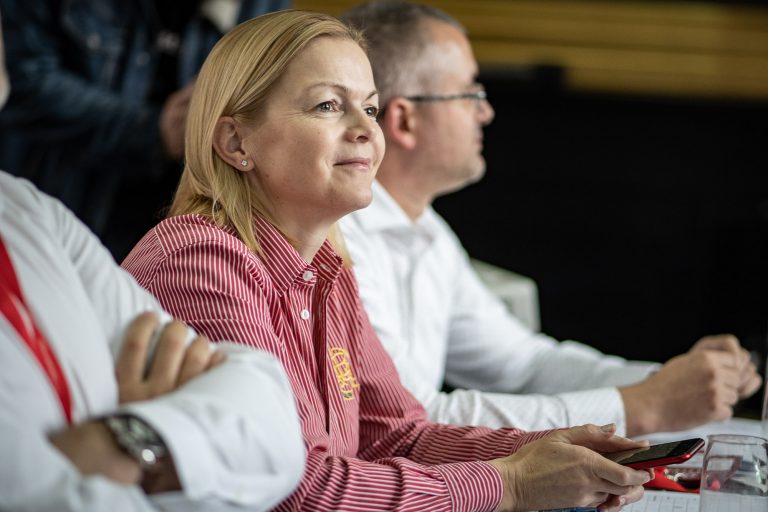 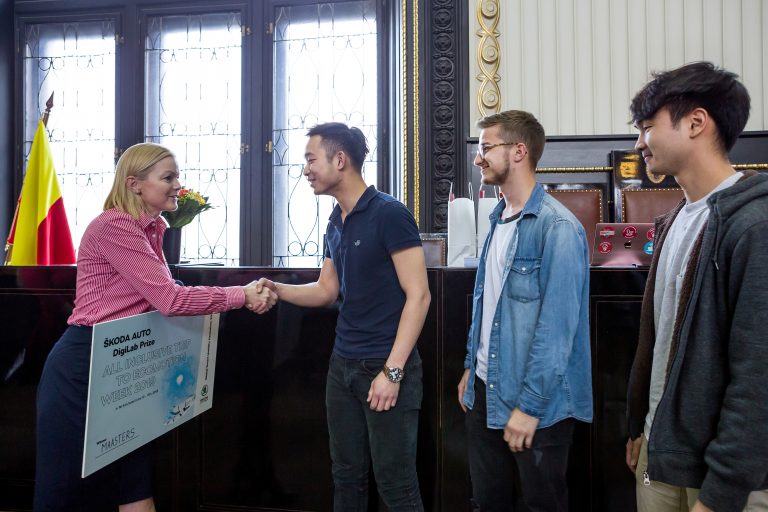 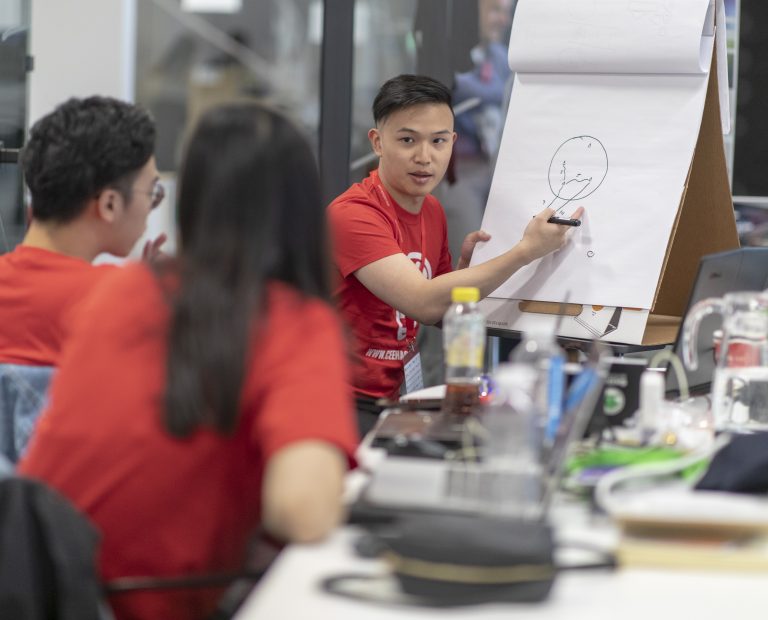 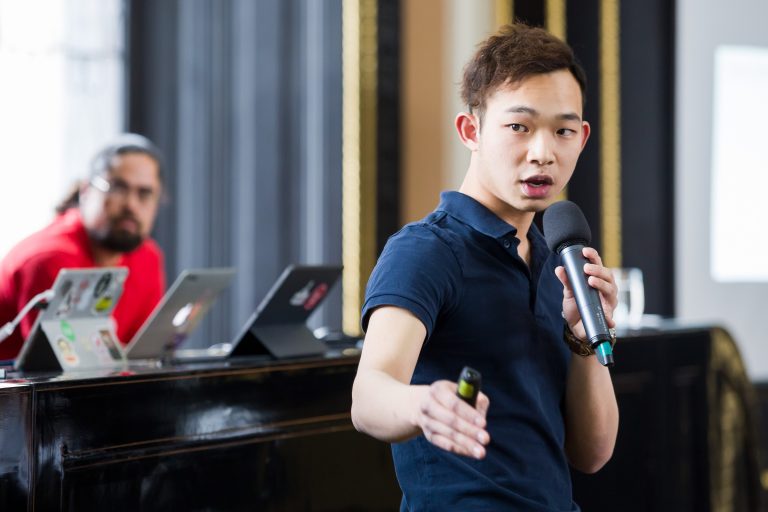