With eMobility on the rise, the governments of many countries are looking for ways in which they can support this trend. They are setting rules that will make purchasing electric cars cheaper or favour their operation over conventional vehicles.

One option is to offer direct purchase subsidies. A second is to introduce concessions to cut down on auxiliary expenses. This includes the reduction or waiving of taxes, tolls and parking charges. Various non-financial benefits are also being deployed, such as the chance to use taxi and bus lanes in cities. As they say, different strokes for different folks – every country has its own way of approaching eMobility support.

These approaches differ not only within Europe, but across continents. The US, for example, introduced credit-based tax relief in 2009. The amounts differ depending on the type of vehicle and can be as much as USD 7,500. This credit is then deducted from the applicant’s income tax. The plan is that, once an electric-car manufacturer hits sales of 200,000 units in the US, the support for purchases of that producer’s vehicles will be phased out over the course of the following year.

The Norwegians can justifiably be regarded as eMobility pioneers, not only by European standards, but on a global scale, too. Norway is the first country in the world where electric cars and hybrids account for more than 50% of all new car sales. It reached this milestone in 2017, just four years after installing the current support system of financial relief and other benefits. Electric-vehicle owners do not have to pay for vehicle registration or motorway tolls, they get to use tunnels and ferries for free, and they have lower road tax. The largest concession is exemption from VAT, which is relatively high in Norway. As a result, electric cars are cheaper than vehicles with conventional internal combustion engines.

The French rolled out clean mobility support in 2008 and they periodically revise it to reflect market conditions. Since the beginning of 2017, the subsidy for the purchase of a vehicle has been EUR 6,000. Customers are eligible for another EUR 4,000 if they deregister a diesel vehicle made before 2006.

In May 2016, the German government approved subsidies of EUR 4,000 for the purchase of fully electric vehicles and a thousand euros less for hybrid vehicles. Electric cars are also exempt from ownership tax for 10 years. The German government had been planning to bring an end to its financial support this year, but rumour has it that an extension is being considered. Starting this year, electric cars and hybrids used for business purposes enjoy a tax concession of 0.5% from the purchase price of the vehicle. The UK also provides electric car grants and has repeatedly extended the period over which subsidy schemes will remain open for purchases. The incentive currently stands at up to GBP 3,500.

In the Czech Republic, electric-car owners are exempt from road tax and, in Prague, can park for free in the blue zones reserved for residents. The government also introduced its fourth subsidy scheme for businesses and authorities in 2016, qualifying companies – depending on their size – for up to 75% subsidies when they buy electric vehicles. Municipalities can purchase electric vehicles with EUR 10,000. 50% of EV sales in 2017-2018 were realised due to this subsidy scheme.

As part of a pilot project, ŠKODA is now making the CITIGO E-PILOT available to selected customers in the Czech Republic. The aim is to find out from prospective and potential customers how the vehicle based on the current technology known from Volkswagen e-up! performs in everyday operation before series production of the electric CITIGO begins.

Austrians are planning a different benefit system. Emission abatement measures mean that the maximum speed is 100 km/h on many of the country’s motorway sections. However, electric-car owners could soon be allowed to drive as fast as 130 km/h in these places. In total, this benefit would encompass some 440 kilometres of motorway. 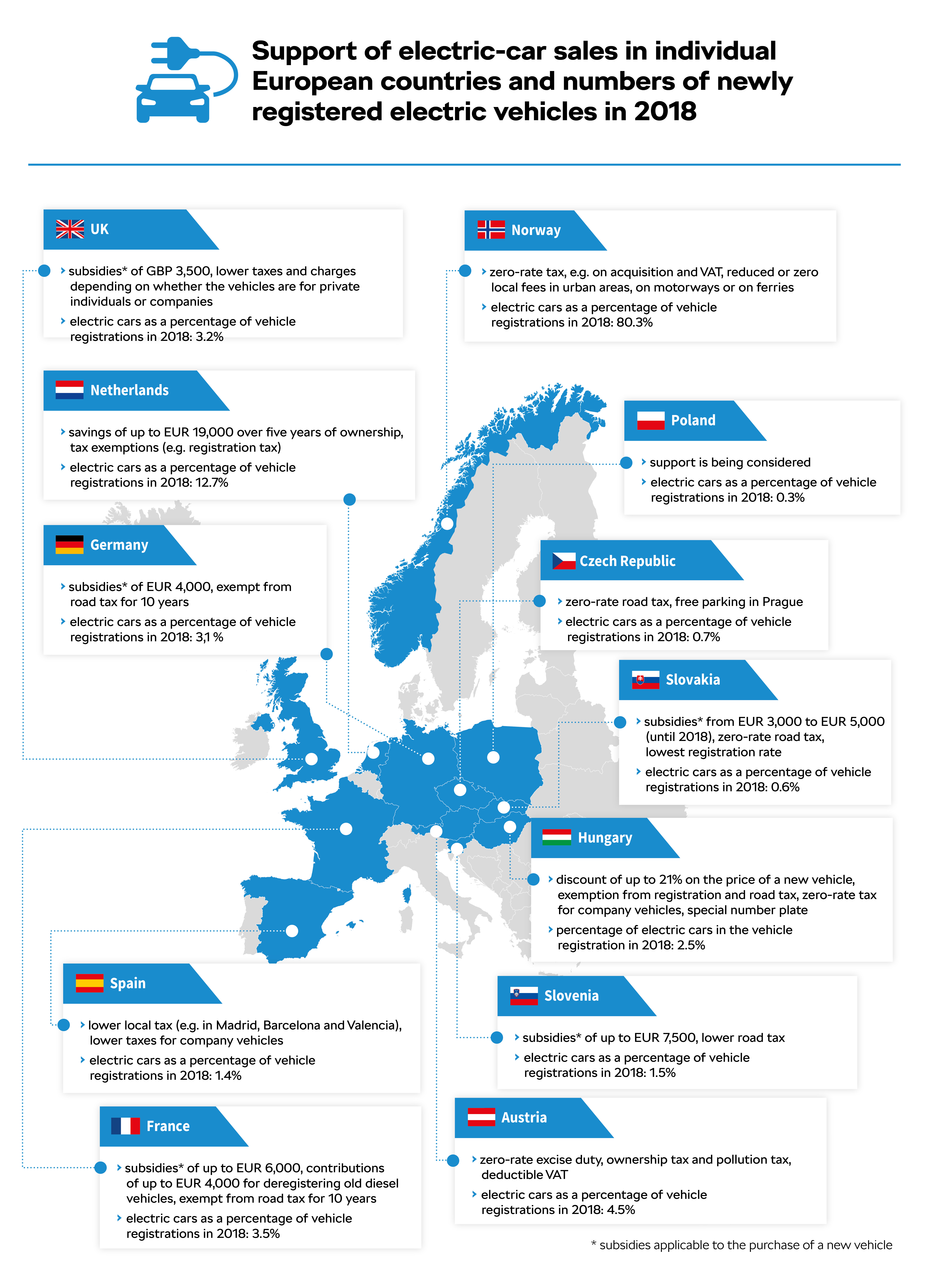 QUESTIONS FOR PETR BOUCHNER, HEAD OF THE DEPARTMENT OF VEHICLE TECHNOLOGY AT THE CZECH TECHNICAL UNIVERSITY IN PRAGUE

What measures can actually help the development of eMobility?
Subsidies should cover the difference between the cost of purchasing an electric car and a conventional vehicle so that, taking into account other benefits and the appetite for electric cars, the expense is roughly the same. Benefits include logical and well-known steps such as entry into and parking in large built-up zones, which can reasonably be justified because of the reduction in local traffic emissions versus conventional vehicles. Interesting action could include subsidies and tax relief for the upgrading of older electric cars, so that they can have new batteries installed, and potentially the guaranteed repurchase of older batteries, as these can still be successfully used in stationary applications or recycled.

Conversely, which measures are best avoided?
Several countries are reining in their subsidies, so users are returning to conventional vehicles when their electric cars no longer offer them any benefits. One major disappointment has been the collapse of Paris Autolib’, the largest electric-car sharing service. Another matter, of course, is whether to motivate the blanket roll-out of electric cars, considering their actual ecological benefit, which can only be local (obviously, this support is unquestionably the right path forward for cities). We need to look at the bigger picture. Even if, when we explore electric vehicles, we limit ourselves just to the operational aspect, we still need to conduct well-to-wheel analyses, which map out and take stock of the strain on the primary source of energy used to keep the vehicle moving. In order for these assessments to be meaningful, we need to track not only the operation, but also the entire life cycle of the vehicle: starting with the extraction of the basic materials, moving on to the processing and production of semi-finished products, and ending with the ecological, economical disposal or recycling of the vehicle and its components. To do this, we must factor in the transportation that takes place at all stages. Future sustainable transportation should be driven primarily by a comprehensive concept of mobility and its needs, because there is plenty of leeway here for optimisation, savings and synergy, and eMobility is a part of that.

How to incentivise eMobility 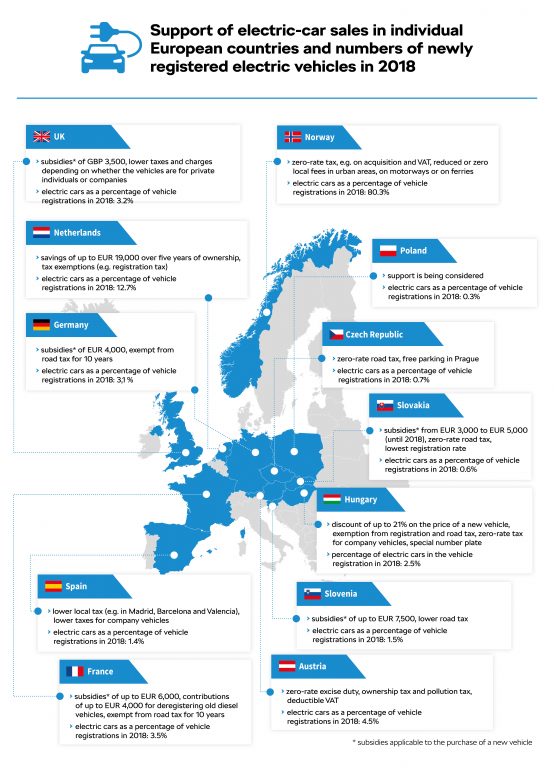