Do you want to relive 1992? That’s what two Czech adventurers attempted, driving a thirty-year-old ŠKODA FAVORIT from Czechia to Finland to catch the culmination of the IIHF Ice Hockey World Championship.

In 1992, ŠKODA made its debut as an official partner of the tournament in Prague and Bratislava. Its manufacturing output was represented at that time by the ŠKODA FAVORIT. Every year since, ŠKODA has provided the organisers with an attractive and reliable fleet of cars, and this year in Finland is no different. And even the 1992 FAVORIT will make another appearance.

Czechs and the FAVORIT head north

The burgundy-coloured car made thirty years ago was the star of the commemorative road trip dubbed Czechs Go By Favorit. The route led from Prague to Tampere, one of the two Finnish cities hosting this year’s IIHF Ice Hockey World Championship. The driving on the 2,000-kilometre route through Poland, Lithuania and Estonia was shared by two Czech influencers, model Andrea Bezděková and moderator Tomáš Zástěra. 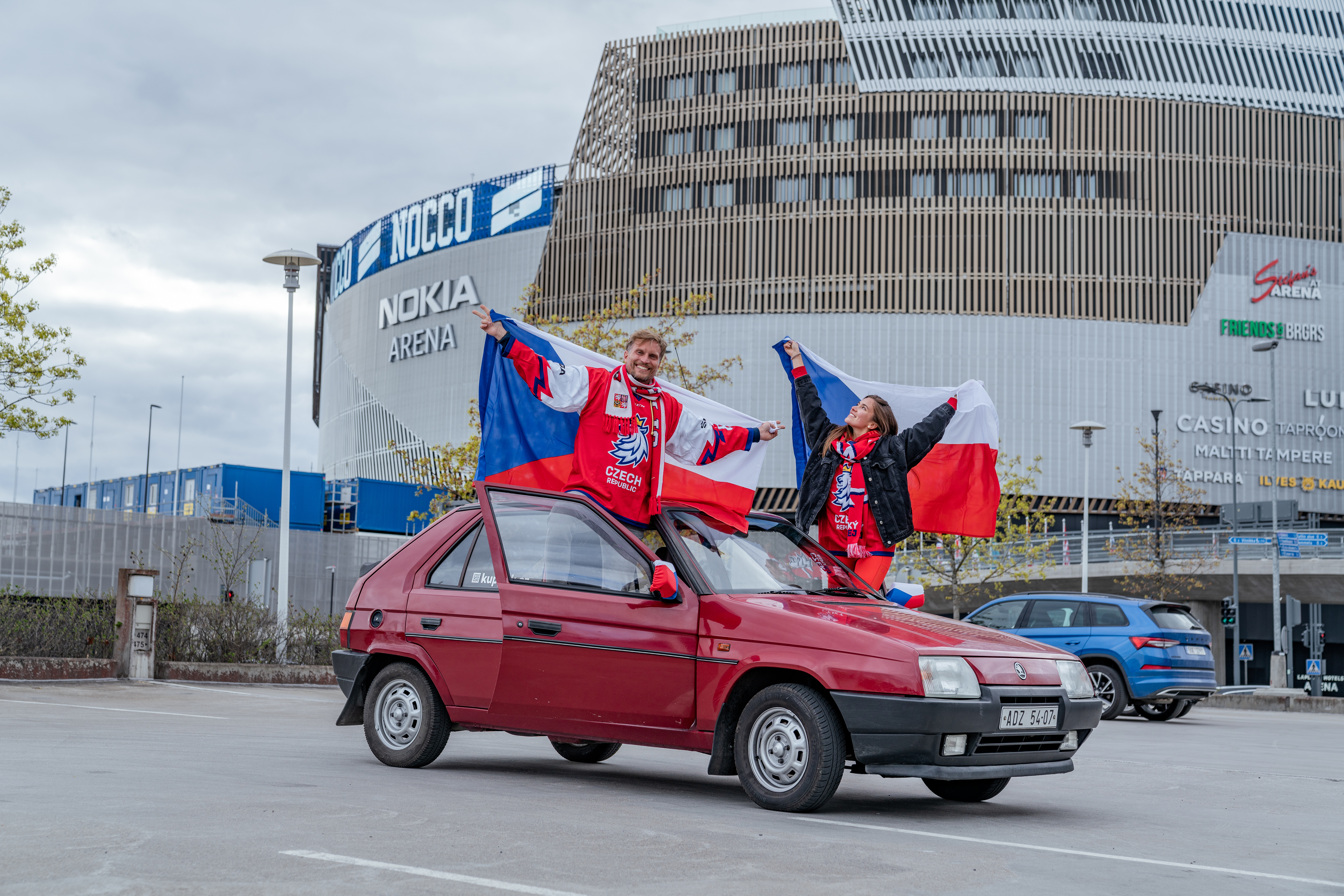 The ŠKODA FAVORIT and crew at their destination, the ice hockey arena in Tampere, Finland

According to both drivers, the journey went without a hitch. They enjoyed the several-day trip, which proved the truth of the well-known saying that the journey is as enjoyable as arriving. According to Tomáš, getting into the car for the first time was a bit of a shock, but after a few hundred kilometres the crew got used to it and the drive in the old car seemed normal.

“I missed not having air conditioning and power steering. But what matters most is who you’re sharing the car with. Because even in the most modern car, a crew you don’t get on with will make the journey a living hell. That’s where I was very lucky,” he smiles. 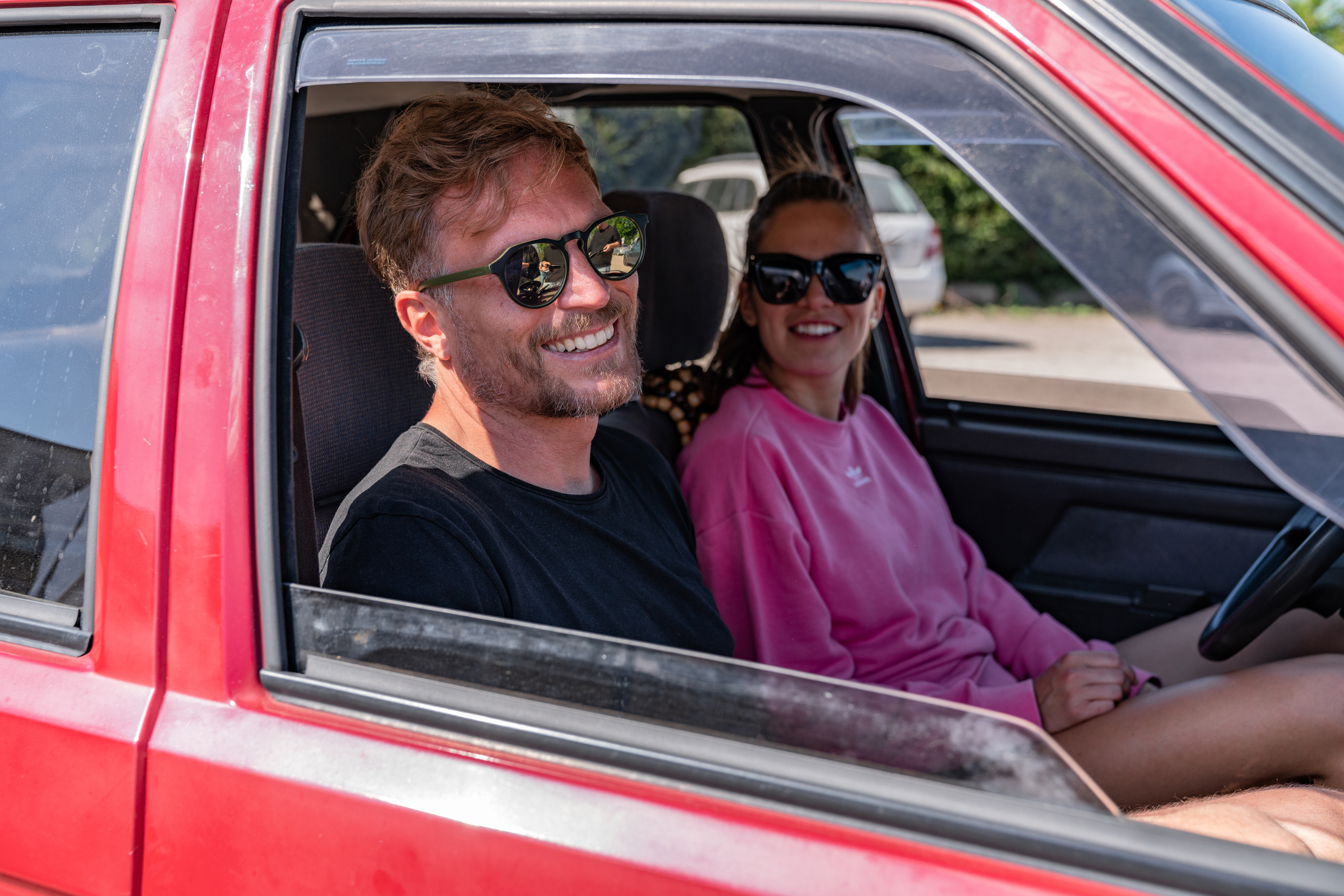 The surprise for both protagonists was how confidently and quickly the fairly old car could speed along the motorways and roads of northern Europe. There was no shortage of attention, and the car caused a bit of a stir. “Especially in Finland, and specifically in Tampere. We noticed the cheers of the Italian fans and the admiration of the Swedes. I don’t know whether they were cheering the car’s design or simply the fact that it could go so far,” concludes the Czech presenter.

The first time: FAVORIT in the stadium

The 1992 IIHF Ice Hockey World Championship was held in Czechoslovakia – in Prague and Bratislava. On 28 April, the redesigned FAVORIT was presented for the first time at the stadiums in these cities. The modifications had already been carried out under the auspices of Volkswagen Group, which ŠKODA had just become part of. 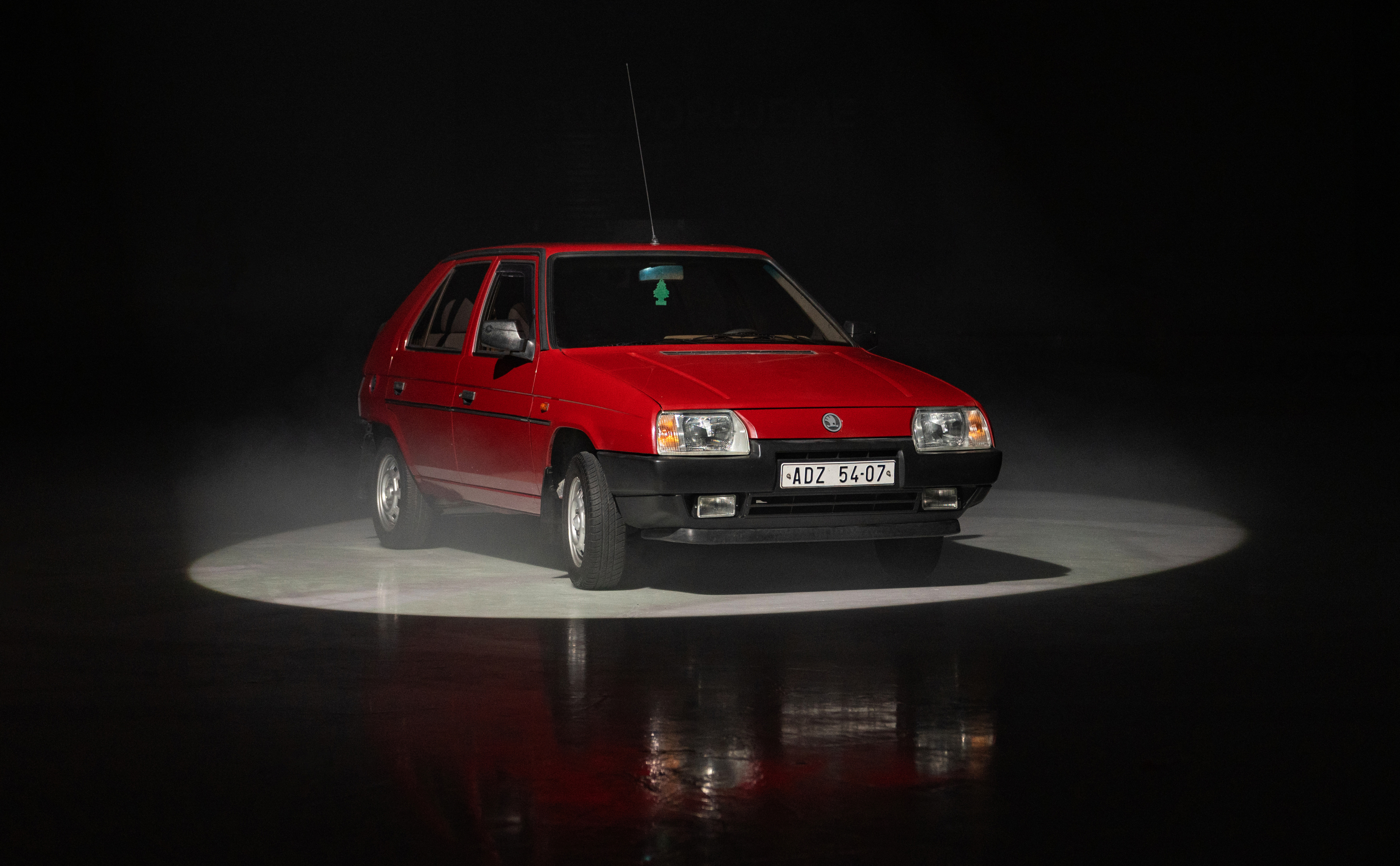 The famous Italian studio Bertone was responsible for the design of the ŠKODA FAVORIT’s handsome and modern bodywork, and the car received several improvements as part of its facelift thirty years ago. The most notable change was the carmaker’s logo on the front grille. The original grille with the vent and logo at one end gave way to a new single mask with the winged arrow emblem in the middle. The brakes and gearshift were also upgraded, with the gear lever getting a new, more ergonomic head.

Ice hockey player and snowboarder behind the camera

Two others watching the action at the IIHF Ice Hockey World Championship are ice hockey player and Olympic medallist Meeri Räisänen and snowboarder Seppe Smits. Meeri is a Finnish ice hockey goaltender. She won Olympic bronze medals with the Finnish national team in women’s ice hockey at the 2018 and 2022 Winter Olympics. And as this ŠKODA KAROQ fan says, “The best hockey experience is winning the Olympics, of course. But even returning to the ice after a really bad injury is an unforgettable experience.” 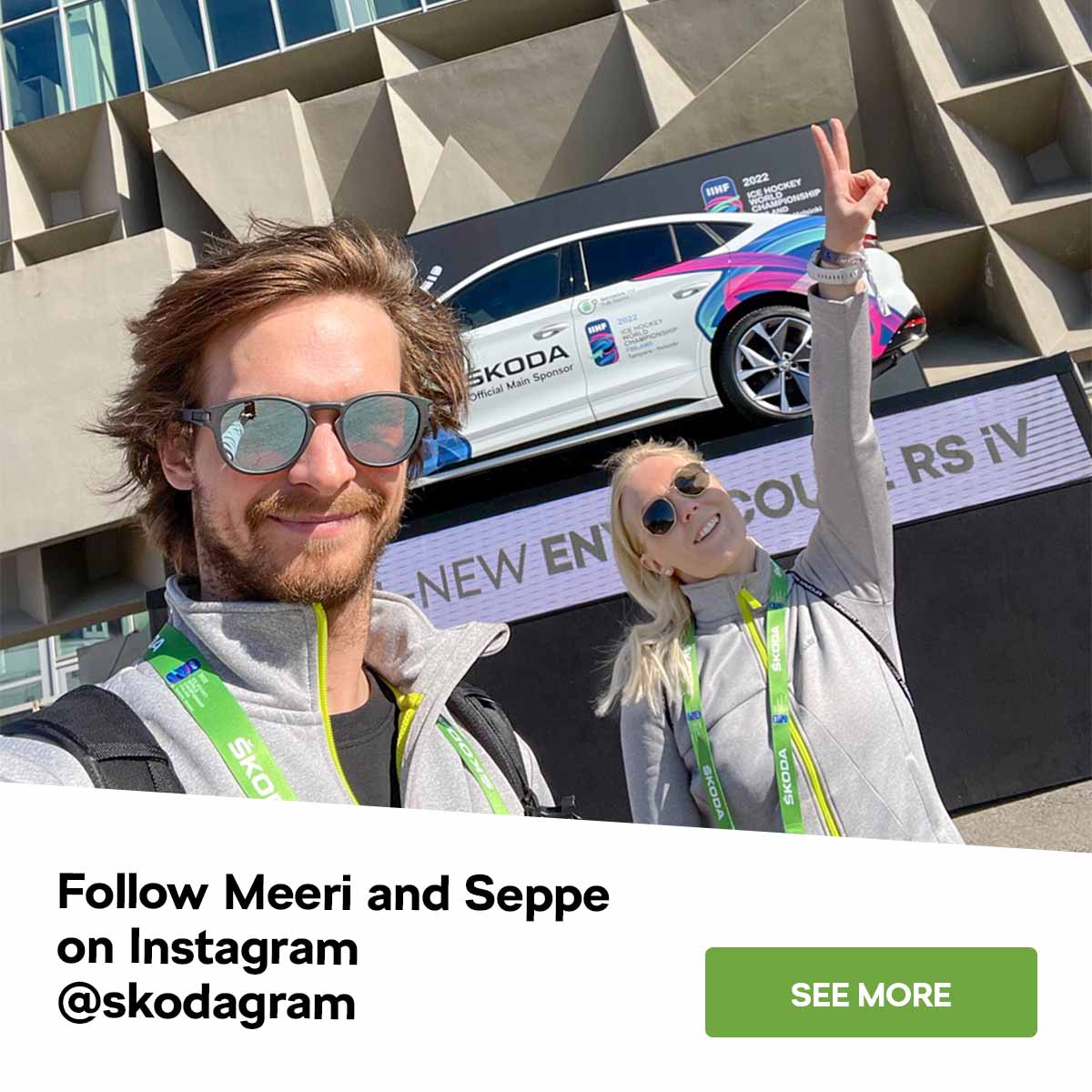 Belgian professional snowboarder and World Championship medallist Seppe smiles as she says this, because his biggest ice hockey experience so far was facing Meeri as she shot pucks at him in the ŠKODA Fanzone. In his own discipline, though, he has been successful since he was 17 years old, when he won his first medal at the Snowboard World Championships. He went on to win a gold medal at the 2011 World Championships in Barcelona in the slope style competition and finished third in the Big Air. And his favourite ŠKODA model? “ŠKODA has a lot of great cars, but I have to say my favourite is the ENYAQ iV,” says Seppe.

Meeri and Seppe went behind the scenes at the Finnish championship to film engaging video reports – and not only about the championship itself – for @skodagram and the ŠKODA Global Facebook page. Take a look at a selection of their best videos:

Meeri and Seppe introduce themselves at the start of the championship

125 years of ŠKODA: Two (and more) heads are better than one

FAVORIT WENT TO THE ICE HOCKEY, A CAMERA BEHIND THE SCENES 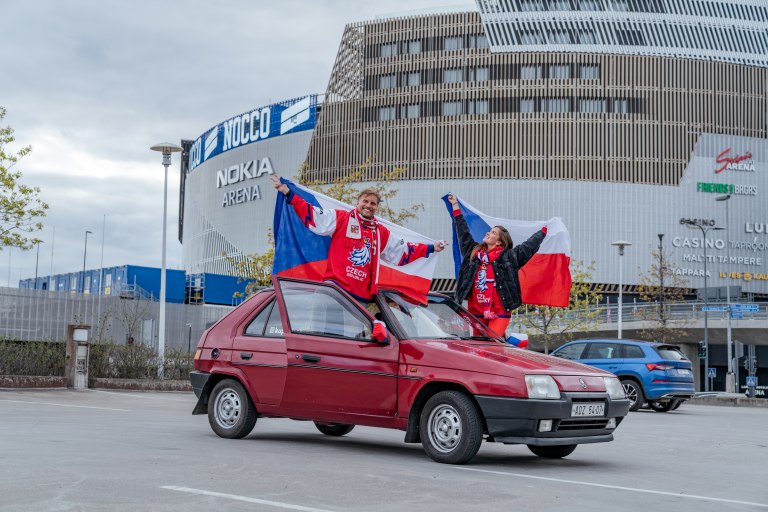 The ŠKODA FAVORIT and crew at their destination, the ice hockey arena in Tampere, Finland 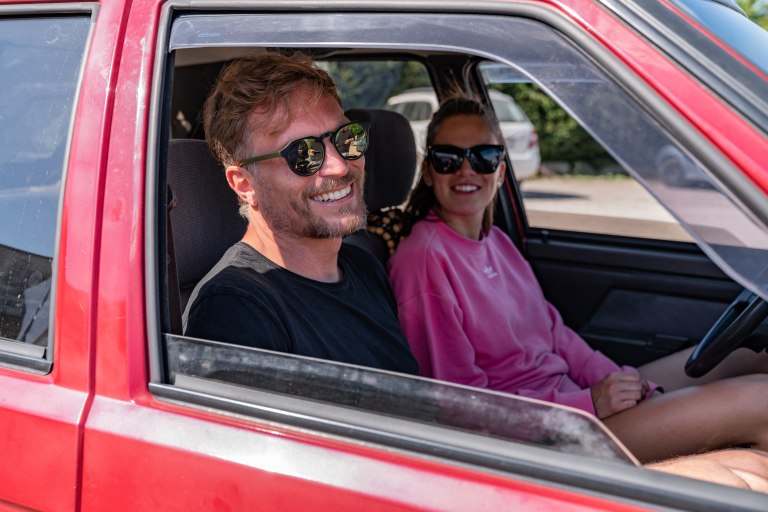 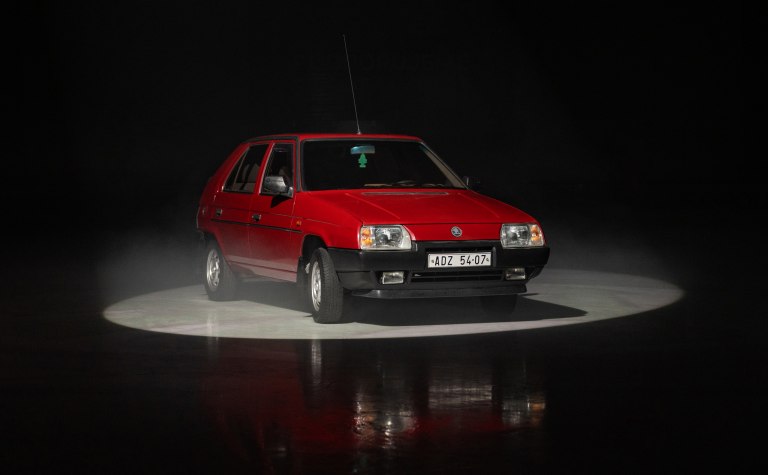