Three mountain bikes, three bikers and a ŠKODA KAROQ SPORTLINE - you can enjoy freedom and thrills on a bike or in a car. All you have to do is join the ride.

What better way to put an SUV through its paces than driving it into the mountains? Three experienced mountain bikers chose the SPORTLINE version of the ŠKODA KAROQ to get them there. It can easily handle off-road driving, even when fully loaded up with the bikes, not to mention helmets, cycling clothes and shoes, something to change into for the night, as well as food, sleeping bags and a tent.

The ŠKODA KAROQ SPORTLINE is a genuine all-rounder. Besides its sporty lines and handling, it has lots of clever features to make life easier for every active lifestyle enthusiast.

Your key in your pocket and enough energy for everyone

Its keyless system means you just have to grab the door handle and the car will open. A press of a button and the engine switches on and starts to purr softly. Before the car and its four occupants reach their destination, it's time to charge their phones. Luckily, the KAROQ has four USB ports, so nobody is left out. 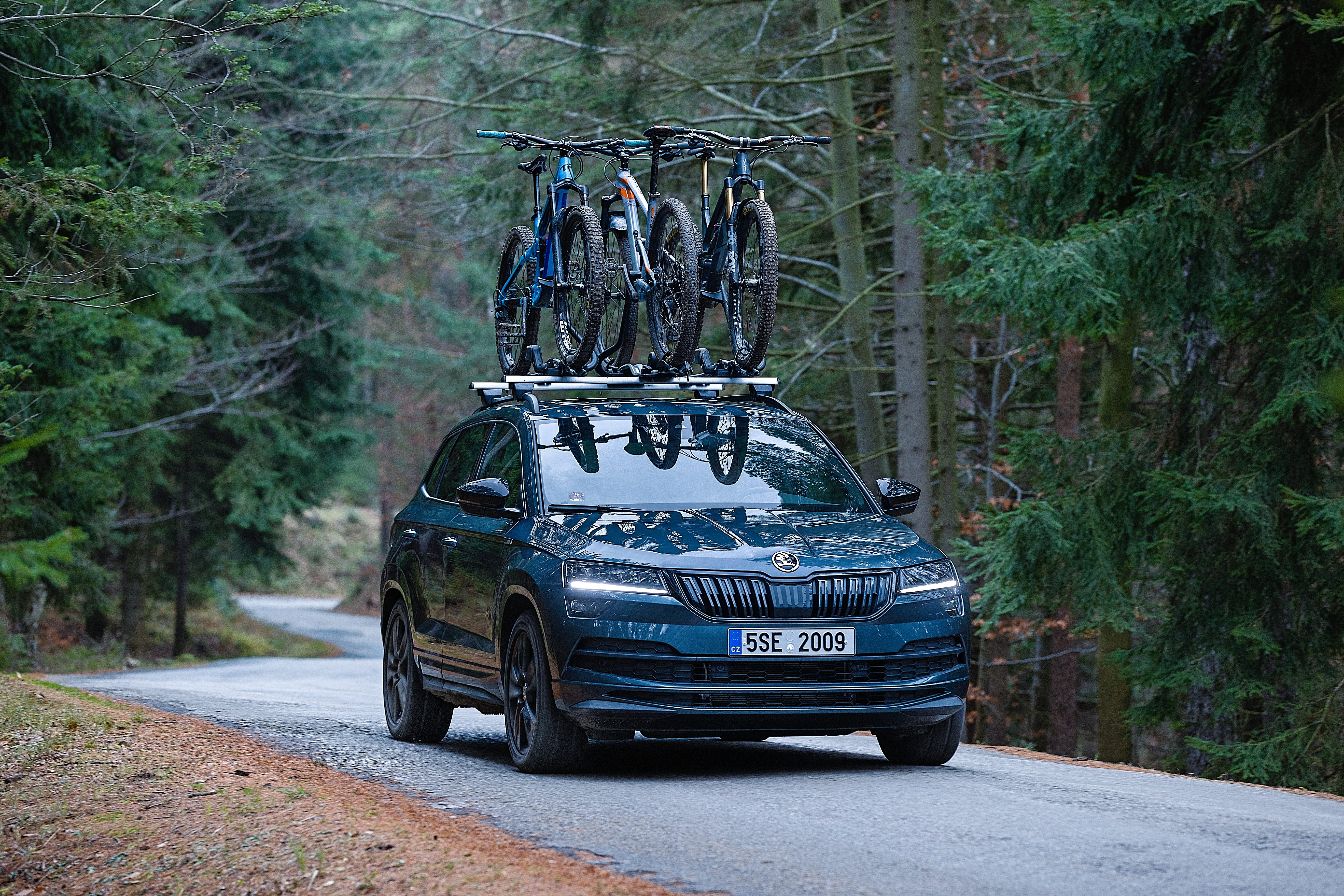 The sunroof lets them see that the bikes are just fine.

Using the big touch display on the dashboard, Anna enters the destination in the navigation system. First, though, they need to inch their way through the city’s heavy Friday traffic. They’ve hardly been driving for a few minutes before they end up in a traffic jam on the way to the motorway. It’s the ideal opportunity to test out the Traffic Jam Assist function. The assist system takes over the tedious start-stop work in the traffic jam. Endlessly moving your foot from the brake to the accelerator is a thing of the past. 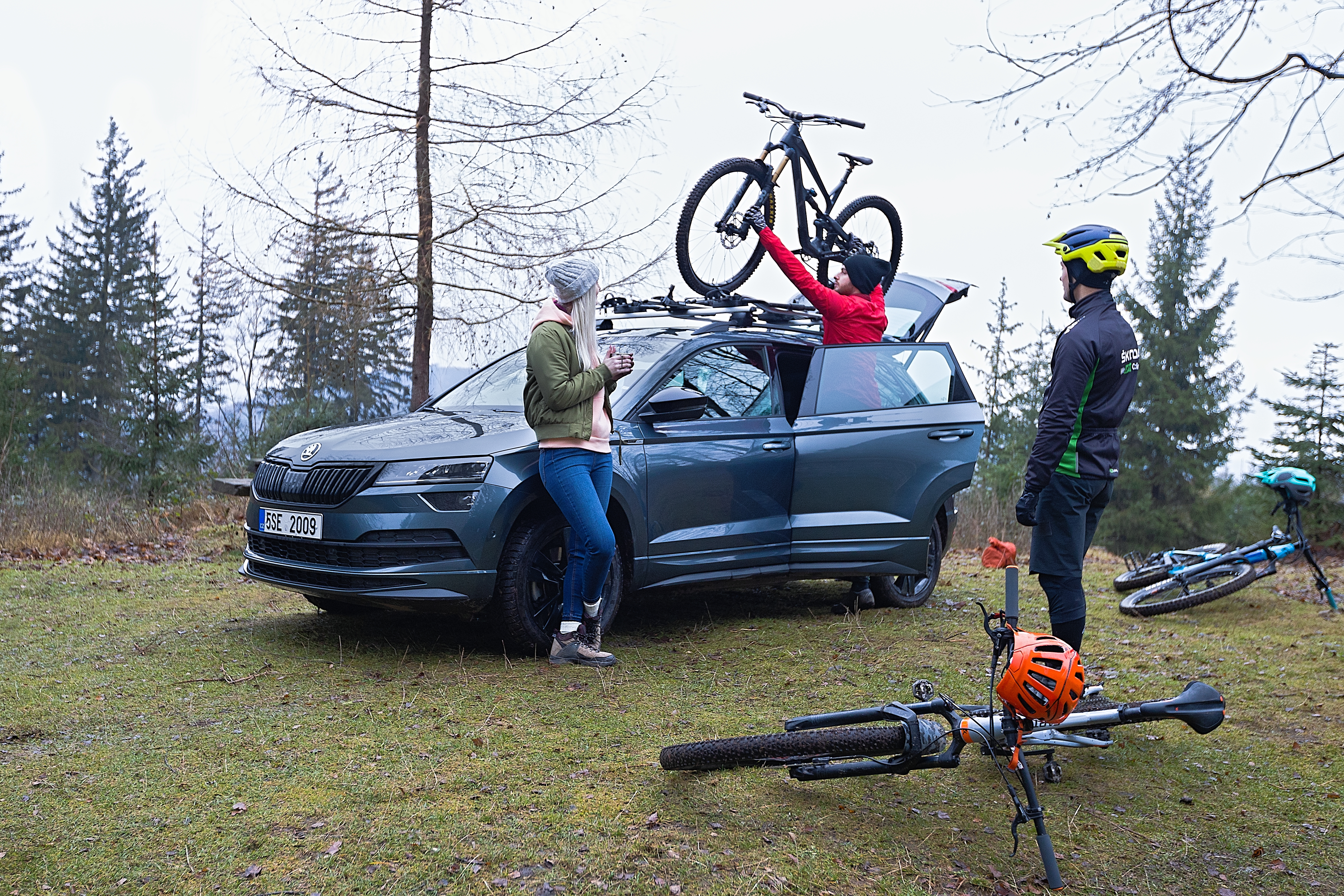 The ŠKODA KAROQ SPORTLINE can handle off-road driving when fully loaded up.

At last the motorway stretches out before them. The adaptive cruise control does more than just keep the car moving at the specified speed and at a safe distance from the car ahead. It’s predictive, which means that it can “read” the navigation system’s maps. So it will automatically reduce speed whenever there’s a sharp bend, roundabout or built-up area approaching. The sense of safety is enhanced by the fact that the car is constantly connected to the surrounding world. In the event of a fault it will get in touch with a service centre. And if, heaven forbid, you have an accident, it will call for help. 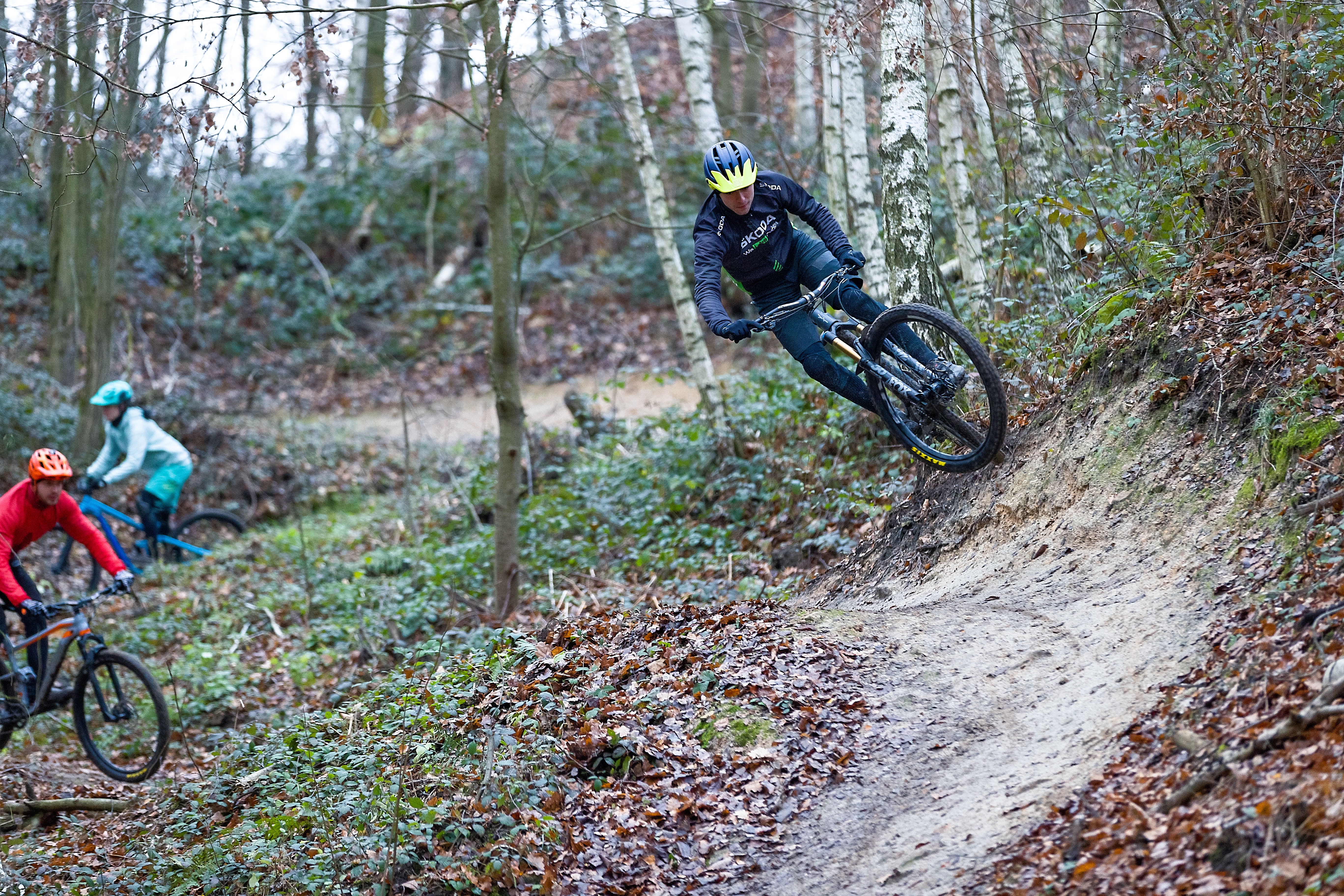 Eyes in the back of its head

Anna really appreciates the Blind Spot Detect function, which warns her about cars behind her – even at a distance of seventy metres. And the car’s sensors can even spot cyclists! Door Alert warns the driver not to open the door when a cyclist is passing, which is a common cause of nasty accidents. Rear Traffic Alert comes in handy when you're parked in a line of cars and want to reverse out. The system sees cars, cyclists and pedestrians approaching from behind and warns the driver, so you don’t have to try to peer through the windows of the cars parked around you.

A little piece of sky

“Did we attach the bikes to the roof rack properly?” the three bikers ask Anna. Their concern is understandable, because their bikes are far from cheap. But no fear, you don’t even have to stop the car to make sure everything’s secure – the sunroof lets you see that the bikes are just fine. 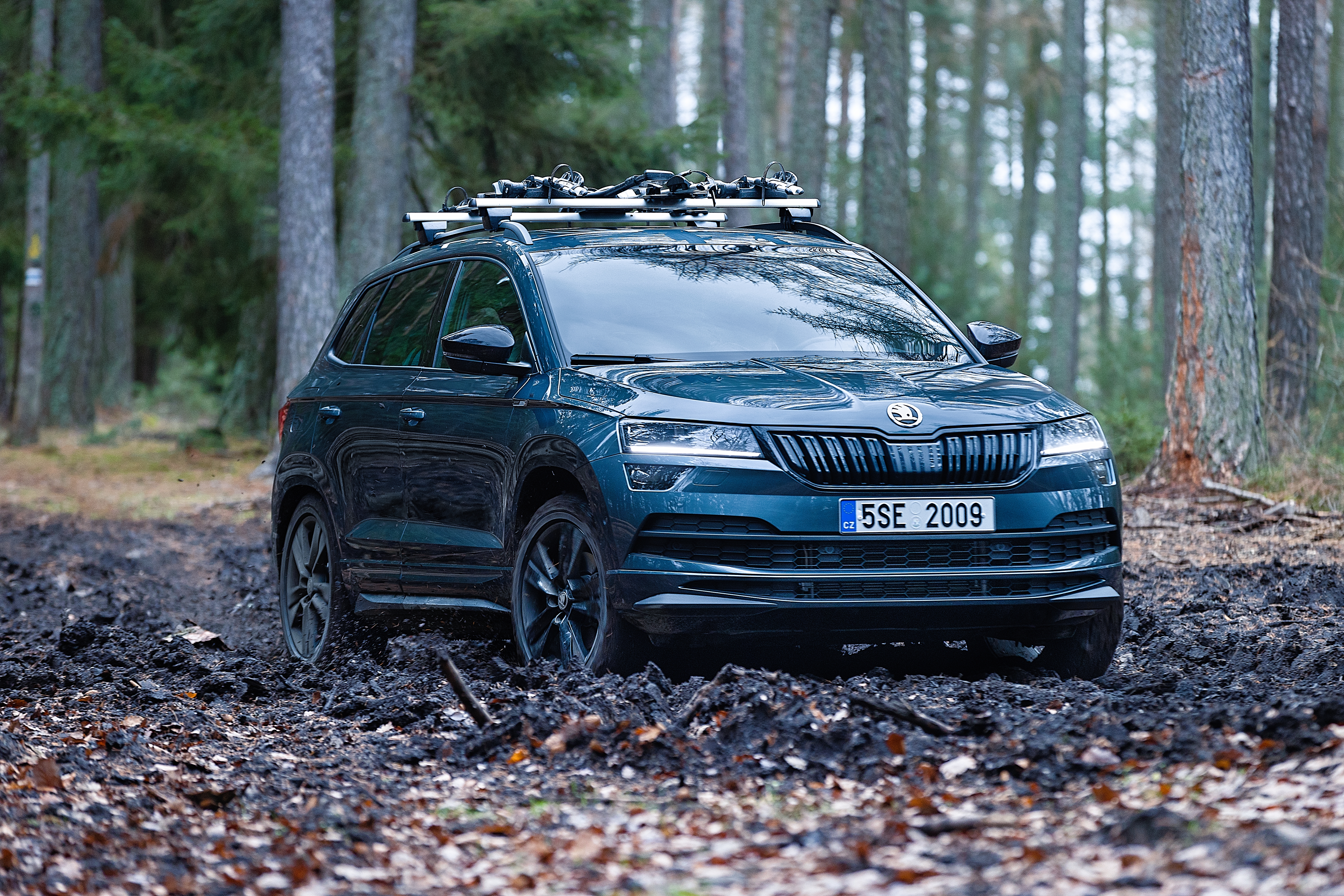 Once the car has turned off the motorway, the rest of the journey is on local roads. Now Anna comes to life: it’s clear she’s really looking forward to all the twists and turns. Even more so when she flicks the automatic transmission into sport mode, which lets the engine push up the revs and change gear later than usual. And the driver? With a broad smile on her face she enjoys every second of the journey.

Good music also helps the journey pass faster. Thanks to the wireless connection between your phone and the car’s audio system, you can play your favourite tracks on Spotify, say. And when Anna gets a call from some friends, she can chat to them without having to take her hands off the steering wheel. 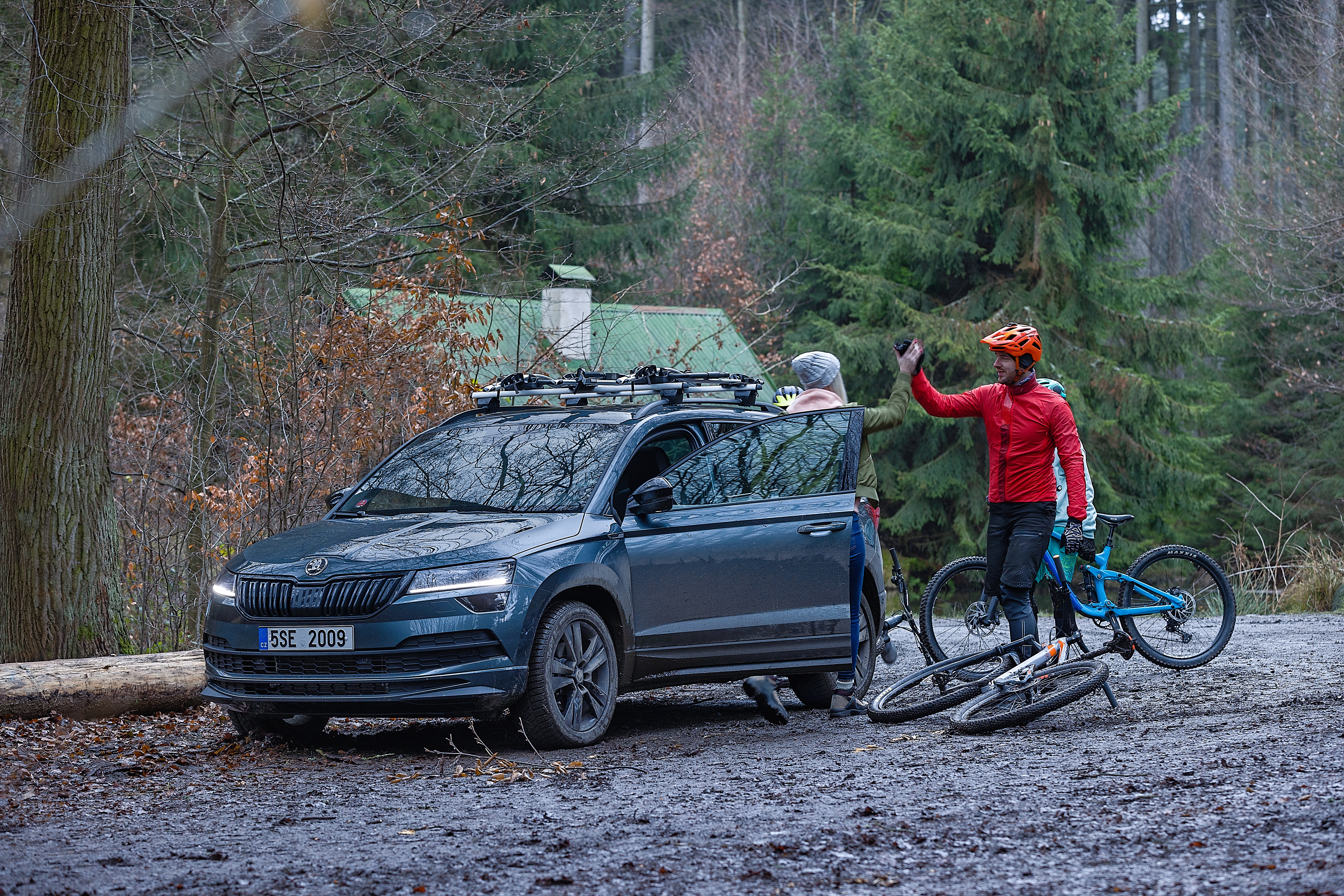 The sporty SUV is the ideal partner for fun in the mountains.

When you’ve run out of road

The foursome would have almost reached journey’s end in an ordinary car, but six kilometres before their destination they run out of road. The only way forwards is along a bumpy track covered in rocks, tree roots and holes. But it's no trouble for the ŠKODA KAROQ. Its big tyres quietly eat up the track. When one of the wheels skids, all-wheel drive activates itself almost unnoticeably and the car keeps pushing forwards. The system constantly calculates the optimal distribution of torque between the two axles, making off-road driving smooth and safe.

The ŠKODA KAROQ SCOUT versus the SPORTLINE – How to Tell Them Apart?

How to be safe on long journeys: don’t rely on assist functions

ENJOY YOUR FREEDOM – ON YOUR BIKE AND BEHIND THE WHEEL 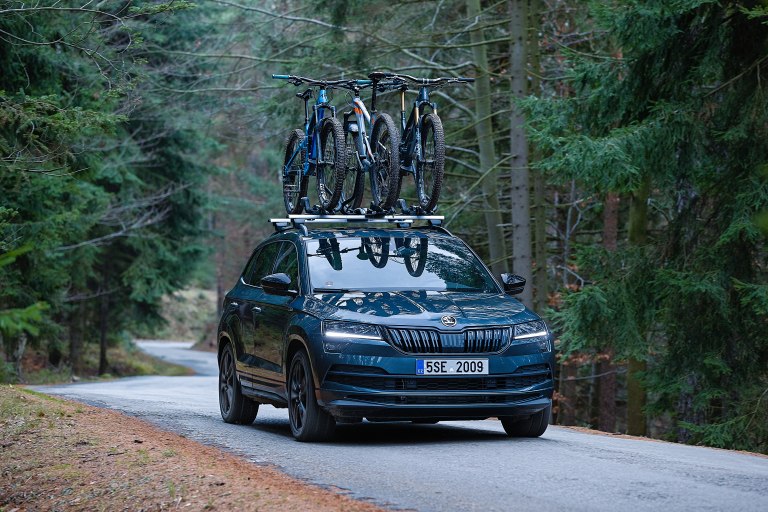 The sunroof lets them see that the bikes are just fine. 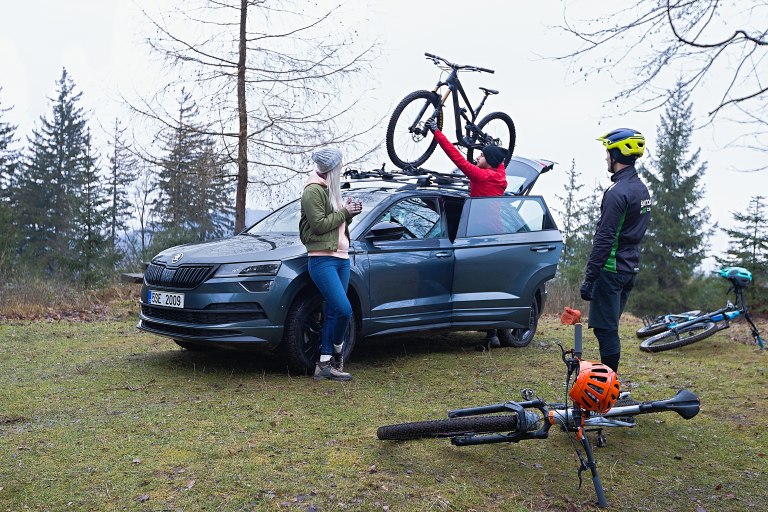 KAROQ SPORTLINE can handle off-road driving when fully loaded up. 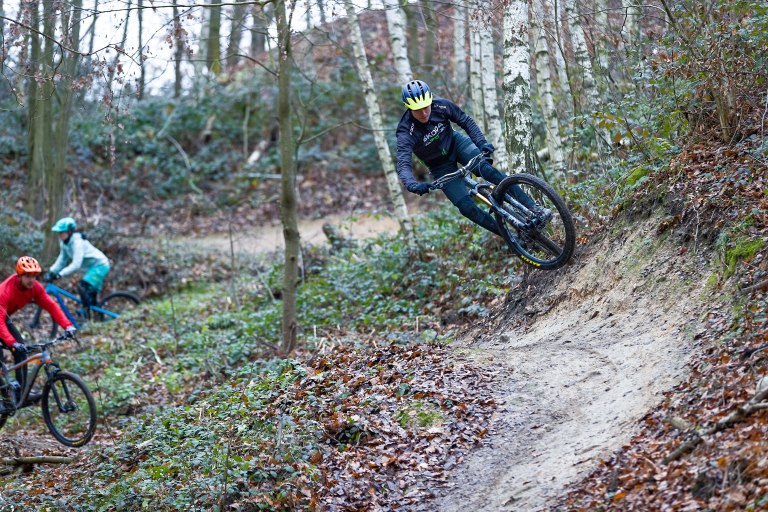 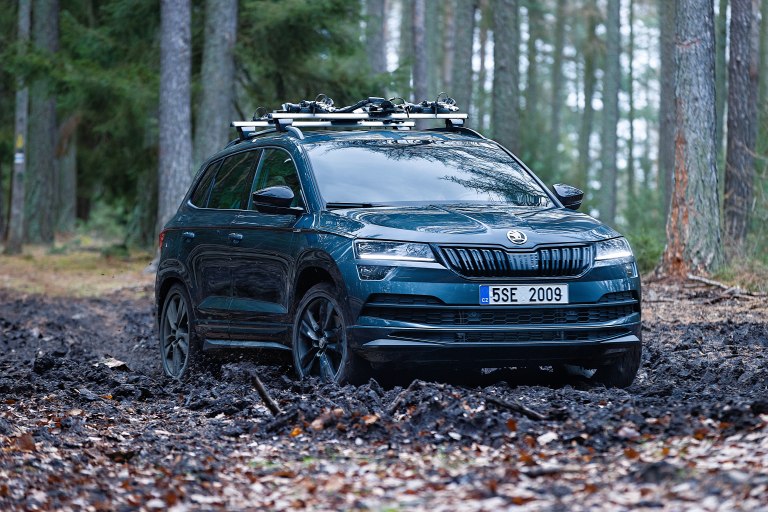 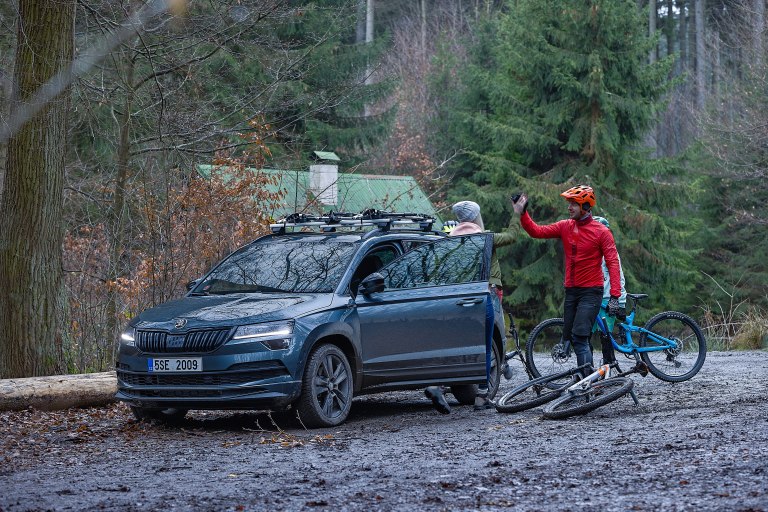 The sporty SUV is the ideal partner for fun in the mountains.