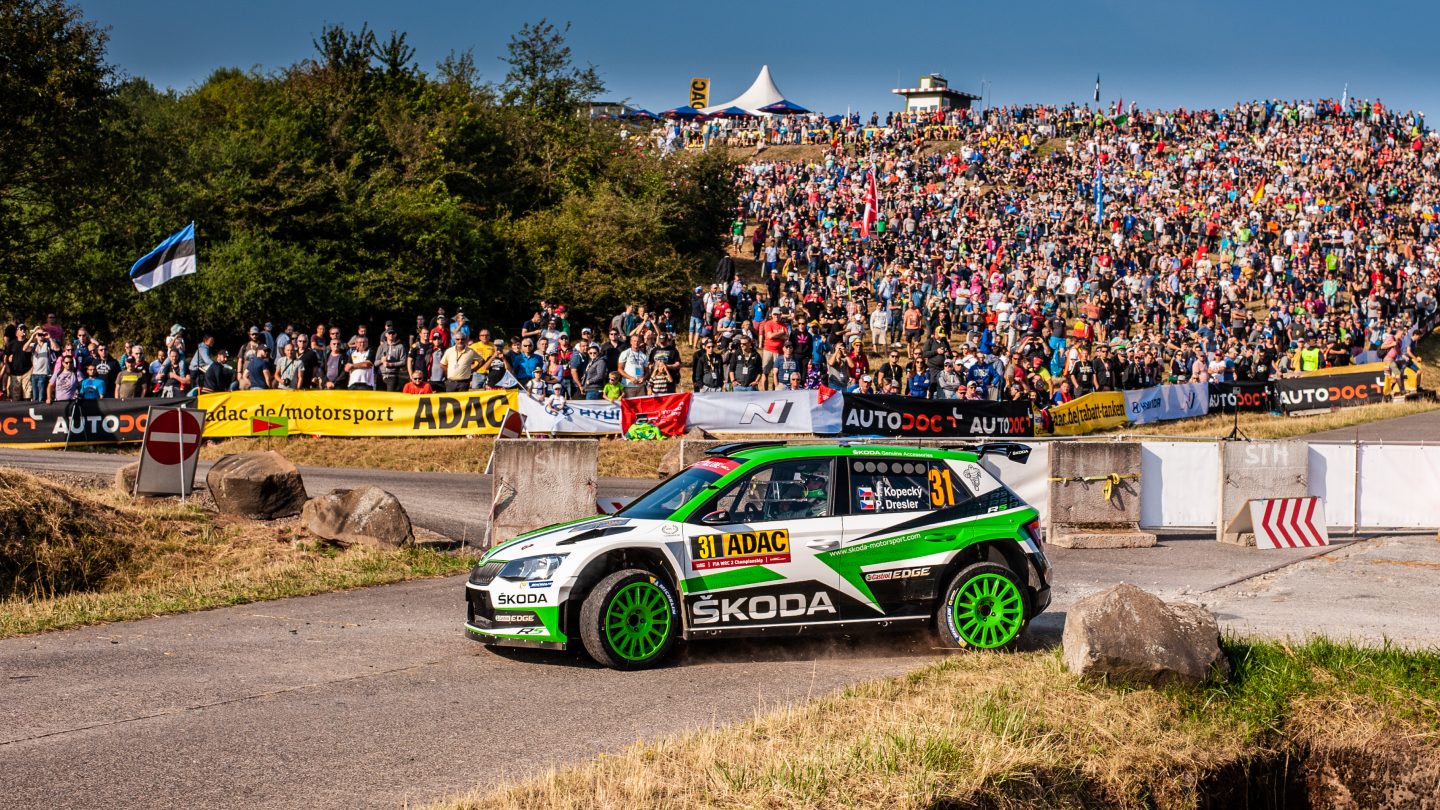 Bosen, 18 August 2018 – The third day of ADAC Rallye Deutschland (16–19/08/2018) presented ups and downs for the ŠKODA Motorsport crews. Jan Kopecký/Pavel Dresler (CZE/CZE) were leading the WRC 2 category when they suffered a puncture and initially dropped down to ninth position. With six fastest times they climbed back to third place at the end of Saturday. Their young ŠKODA teammates Kalle Rovanperä/Jonne Halttunen continued to impress with fast times on the tarmac stages and took the lead of the WRC 2 category, while ŠKODA privateers Fabio Andolfi/Emanuele Inglesi (ITA/ITA) are second in class after a stunning performance. 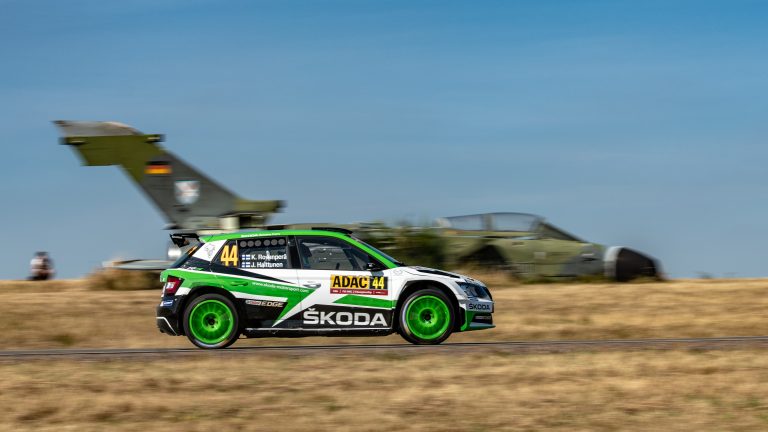 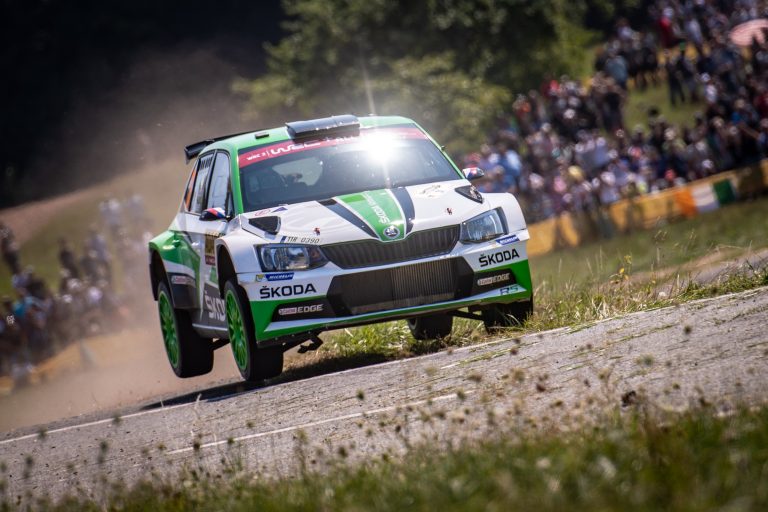 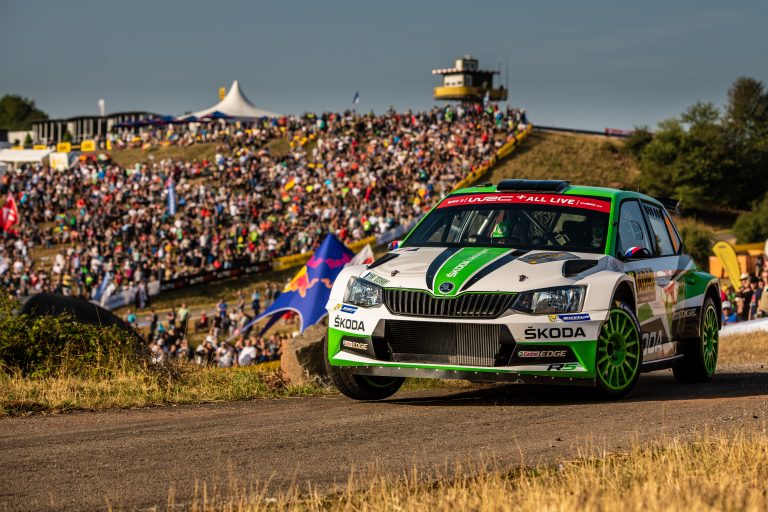 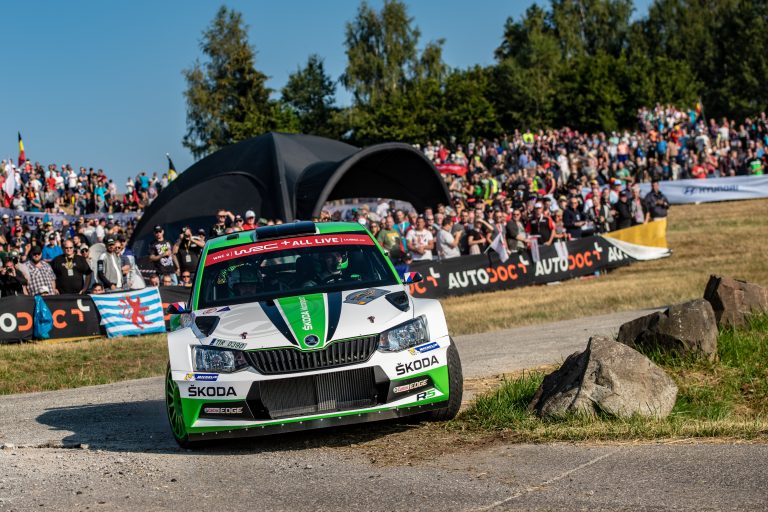 During Friday’s vineyard stages Czech Rally Champions Jan Kopecký/Pavel Dresler (CZE/CZE) powered their ŠKODA FABIA R5 into the lead of the WRC 2 category at ADAC Rallye Deutschland, setting three fastest times on the way. Their young teammates Kalle Rovanperä and Jonne Halttunen (FIN/FIN) hat set the second quickest time overall in the opening street show stage on St. Wendel on Thursday. After a clever ride on Friday, they continued their first tarmac rally for the ŠKODA factory team with fifth position in WRC 2.

Saturday’s focus was mainly on the military area of Baumholder and the famous “Panzerplatte”. Nearly 100 kilometres of gruelling, fast, rough and extremely abrasive tank tracks were waiting for the crews. On top of that, the stages are lined by big rocks and concrete blocks, the infamous “Hinkelsteins“, who are really unforgivable if a car leaves the track. In total, the Saturday leg featured eight special stages running over 150 kilometres in the race against the clock.

Jan Kopecký started into Saturday morning with a second fastest time. But on the first passage of the 38.57 kilometres long “Panzerplatte” stage he collected a puncture after 24.3 kilometres and had to change the tyre. Despite changing the tyre change on the stage in a record braking time, he lost around 1.40 minutes and initially dropped from the lead down to ninth position in WRC 2. “Suddenly I realized that we have a flat front right tyre. We immediately stopped to change,” commented Kopecký.

From there on, it was a race to catch up for the Czech Champion. And on the next two stages before the midday service halt, he set two fastest times and moved up to eighth position. Meanwhile teammate Rovanperä powered his ŠKODA FABIA R5 to fourth place in the category. “We didn’t risk anything on our first run through the Baumholder stages,” said the Finnish youngster during the midday halt.

After the service break the crews were leaving for the afternoon loop, which offered around additional 50 kilometres of two Baumholder stages and around 25 kilometres of two fast country road stages. On the short version of the “Panzerplatte” stage, Kopecký set the next fastest time, moved up to seventh position. “We just need to focus now on our own performance, which has to be perfect” he emphasized before he took the start for the more than 38 kilometres long version. And so he did, he was the quickest WRC 2 competitor by far and as a consequence moved up to sixth place. With two more fastest times, he later moved up to third position, while Kalle Rovanperä sensationally took the lead. While the afternoon was very successful for the ŠKODA crews, their competitors suffered from mistakes or technical issues.

ŠKODA Motorsport boss Michal Hrabánek was happy at the end of a spectacular Saturday: “What a day! Kalle and Jonne impressed me at their first pure tarmac event for our factory team with their speed and cleverness, which brought them into the lead. Jan and Pavel fought back after their bad luck with the puncture and proved a great moral and their pure speed on tarmac.”

After three more tests totalling around 72 kilometres, the winner will reach the podium in St. Wendel on Sunday (19 August) at 13h00.

Number of the day: 6
On the eight stages during the third day of ADAC Rallye Deutschland, Jan Kopecký set six fastest WRC 2 times. 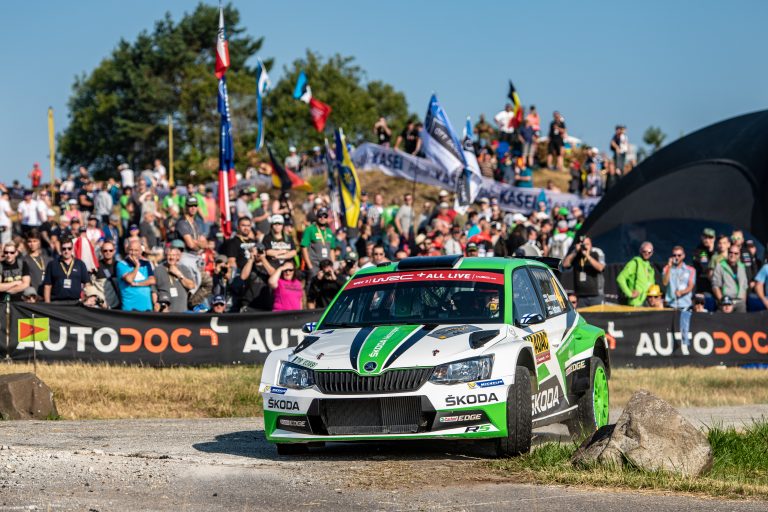