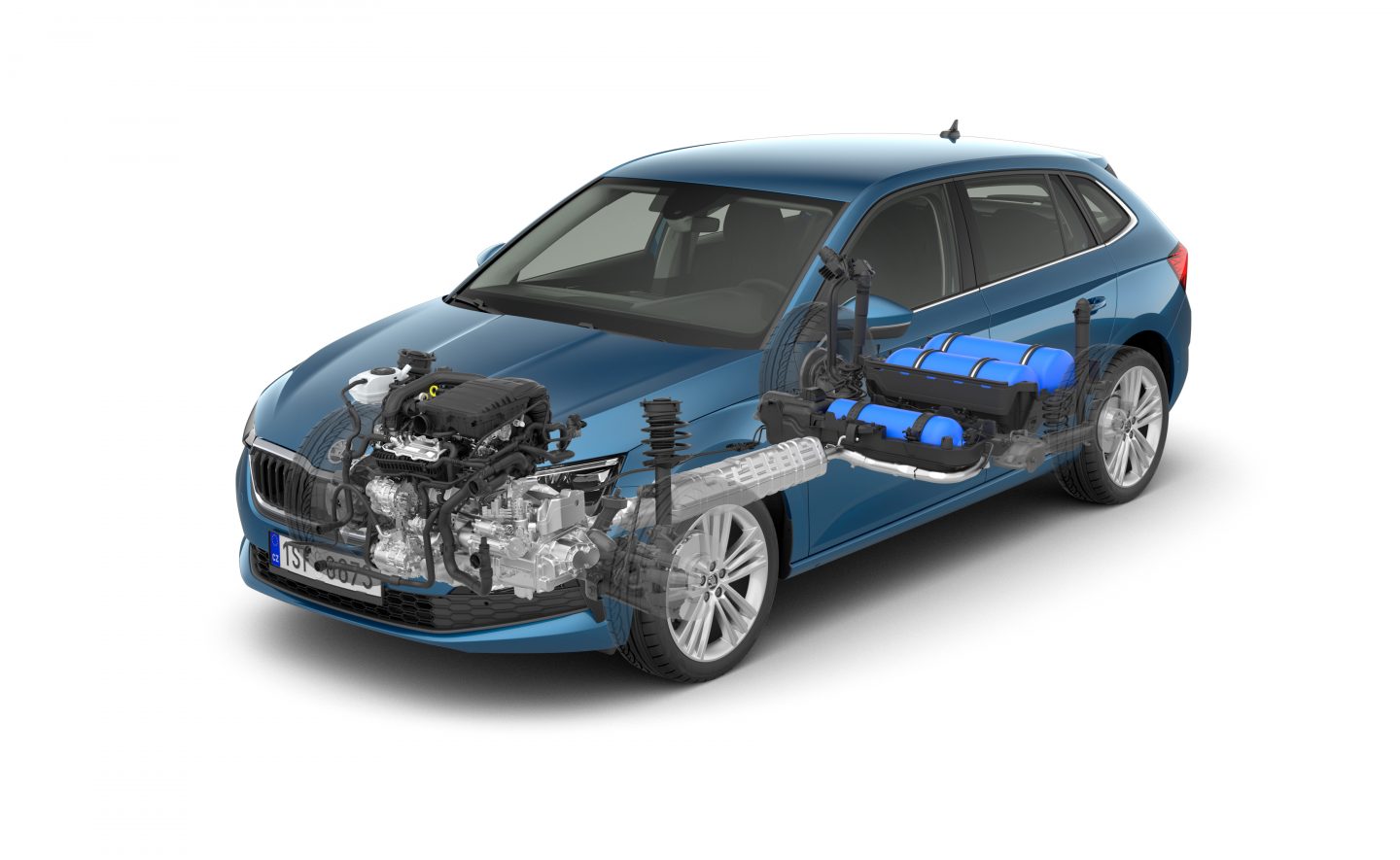 › Biomethane and synthetic gas can achieve up to 90-per-cent and full carbon neutrality respectively
› Fuel costs reduced by 40 to 50 per cent compared to diesel and petrol engines
› G-TEC models of SCALA, KAMIQ and OCTAVIA remain in the ŠKODA model range

Mladá Boleslav, 10 March 2020 – Natural gas vehicles are a well-known alternative for efficient and eco-friendly individual mobility and are popular in many European countries. Vehicles like the all-new ŠKODA OCTAVIA G-TEC due to be released in the second half of 2020 and the already available G TEC versions of the ŠKODA SCALA and KAMIQ enable immediate CO₂ savings of around 25 per cent compared to a conventional petrol engine, depending on the origin and production method of the gas used. Biomethane and synthetic gas can achieve up to 90-per-cent and full carbon neutrality respectively. Yet G-TEC models are perfectly suited for everyday driving, with the same Simply Clever benefits as any other ŠKODA model, and provide undiminished comfort and driving pleasure. The G-TEC models of SCALA, KAMIQ and OCTAVIA will remain in the ŠKODA model range for several years to come.

Cleaner combustion and a higher energy content than petrol and diesel are two of the key advantages of compressed natural gas (CNG). In addition, it can be topped up as easily and quickly as conventional fuels at suitably equipped filling stations. With the European network of CNG stations continually expanding, mid-2019 saw Italy in the lead in Europe with close to 1,300 filling stations, ahead of Germany with around 900. The Czech Republic came in third place, followed by Sweden and the Netherlands, all approaching the 200 mark.

In CNG mode, running on natural gas, these cars emit 25 per cent fewer CO₂ emissions than vehicles powered by a conventional petrol engine. When adding a 20-per-cent share of bio-CNG, as is currently common in Germany, CO₂ emissions are reduced by as much as 35 to 40 per cent. Using an even higher bio-CNG proportion made from plant residues and biological waste can achieve improvements of up to 90 per cent, approaching carbon neutrality. Full carbon neutrality can be achieved when running on synthetic methane produced from renewable energy using a power-to-gas process. However, this technology is currently still in development.

Significant reduction of fuel costs
CNG has a higher energy content than petrol or diesel and is cheaper to buy. This significantly reduces fuel costs for each journey. In Germany, the single largest European market for ŠKODA, the price advantage over diesel-powered vehicles comes in at around 40 per cent, and as much as 50 per cent for petrol engines. Even greater savings can be achieved in Italy, due to higher petrol and diesel prices.

The all-new ŠKODA OCTAVIA G-TEC due to be launched in the second half of 2020 has a 1.5-litre four-cylinder TSI engine delivering 96 kW (130 PS), which enables sprightly performance. Its three CNG tanks have a joint capacity of 17.33 kilograms, allowing for a range of up to 480 kilometres in CNG mode. The 1.0-litre TSI in the SCALA G-TEC and the KAMIQ G-TEC produces an output of 66 kW (90 PS). In both models, the three CNG tanks have a capacity of 13.8 kilograms – equivalent to a CNG-only range of around 410 kilometres in the SCALA and KAMIQ.

G-TEC engines specially modified for CNG use
Compared to the standard engine and to enable it to run on CNG, the 1.0 G-TEC is fitted with different intake and exhaust cams, a redesigned cylinder head and a new induction tract as well as special CNG-compatible injector nozzles and particularly heat-resistant exhaust valves. In addition, an electronic control unit reduces the pressure of the gas in two stages: the first mechanically reduces the pressure in the tanks from 200 bar to around 20 bar; in the second stage, a solenoid valve is used to lower the pressure to the absolute working level of between 9 and 5 bar prevalent in the low-pressure system. The 1.5 G-TEC features similar modifications. It is also designed to support a high 12.5:1 compression ratio and uses the so-called Miller cycle, with the inlet valves remaining open slightly longer during the compression stroke. A turbocharger with variable turbine geometry ensures timely and even build-up of charging pressure.