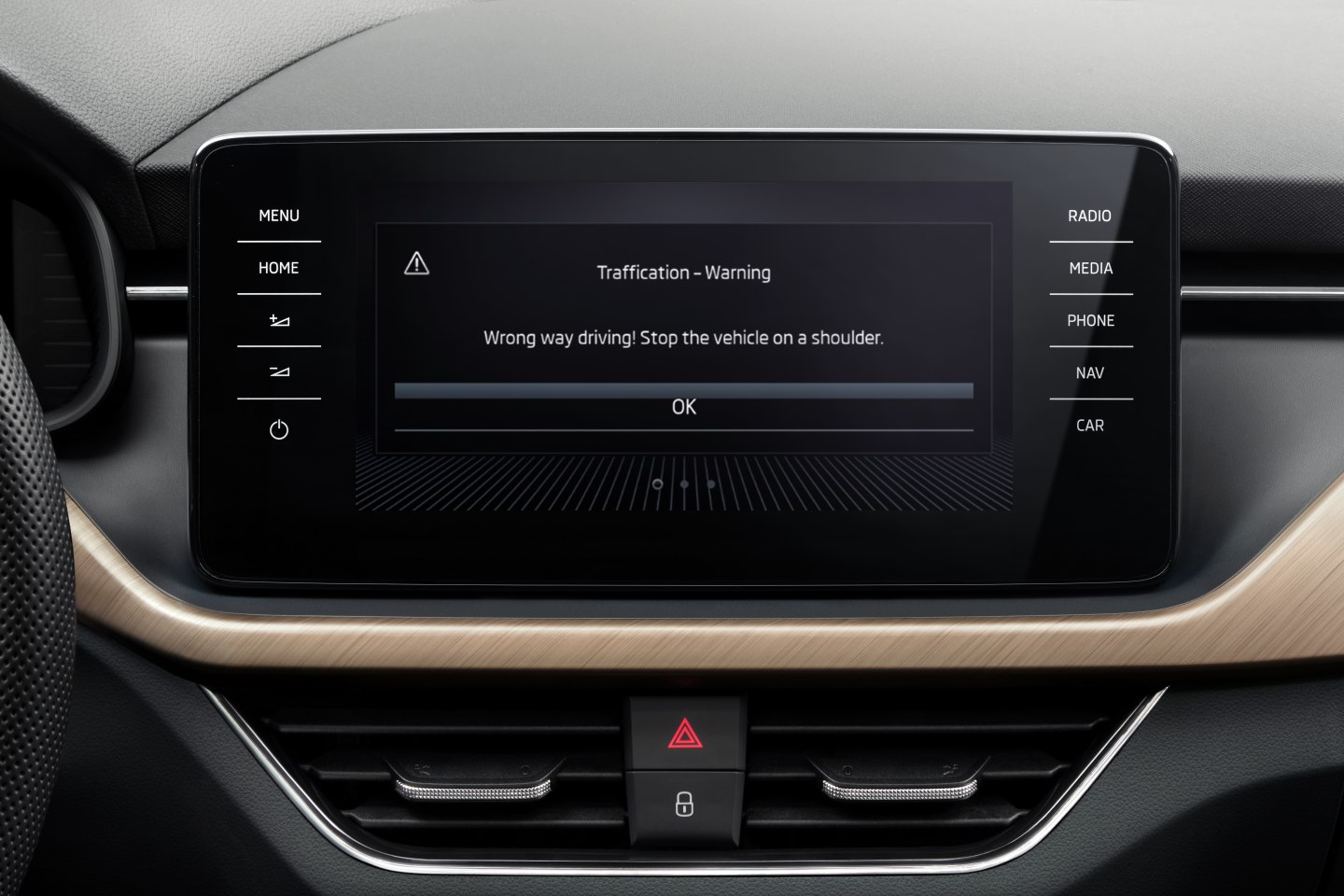 › A new application alerts drivers to traffic hazards and inadvertent wrong-way driving
› The app is available for the ŠKODA SUPERB as well as the SCALA, KAMIQ, KAROQ and KODIAQ models
› Additional features and further models are due to be added in the course of the year

Mladá Boleslav, 10 February 2021 – The practical ŠKODA infotainment apps have now been joined by a new Traffication Infotainment App. This application enhances ŠKODA drivers’ safety by alerting them to traffic hazards such as stranded vehicles. Moreover, the app prevents drivers from entering a motorway slip road against the direction of traffic and becoming wrong-way drivers. First launched in the ŠKODA SUPERB, the Traffication Infotainment App can now also be easily downloaded and installed in the SCALA, KAMIQ, KAROQ and KODIAQ models, provided the vehicles are equipped with their respective top infotainment systems based on the third-generation Modular Infotainment Matrix. The app will be made available for further ŠKODA models during the course of the year, and ŠKODA will also gradually expand the range of functions supported by this new safety feature.

Following on from the infotainment apps for weather and news as well as the new Calendar App and Marketplace App, ŠKODA is now introducing its Traffication Infotainment App. After installation via the Shop, the new application runs in the background but immediately shows an alert on the central infotainment display when the driver could encounter a traffic hazard on an upcoming stretch of road. Such a warning can prevent drivers from inadvertently entering a motorway slip road against the direction of traffic, thus becoming wrong-way drivers. An early warning is also displayed when the system detects stationary vehicles with their hazard warning lights flashing – for example after a breakdown – on the road ahead. The cars in question must likewise be running the Traffication Infotainment App. In the future, these warnings will be sent from all new ŠKODA cars fitted with systems based on the third-generation Modular Infotainment Matrix.

Safety first
The new app complements the infotainment system’s navigation function. By displaying information on traffic conditions, it enhances safety without becoming a source of distraction for drivers. The app always runs in the background; there is no need to enter a desired destination in order to receive hazard warnings. “The app provides drivers with relevant traffic warnings on an ongoing basis, regardless of whether the navigation system is activated or not,” emphasises Michal Vondra.

One of the key features of the Traffication Infotainment App is a warning issued when a driver tries to enter a motorway slip road against the direction of traffic. The integration of wrong-way driving warnings is the result of a long-term collaboration between ŠKODA and Bosch. Bosch’s cloud-based wrong-way driver warning system has been available as a smartphone app since 2018 and is now offered by 25 app partners in Europe. ŠKODA is the first car manufacturer to provide this important safety feature for their customers.

“Our goal is to put the wrong-way driver warning system in every car. Every accident caused by wrong-way drivers is one too many,” says Dr. Mathias Pillin, president of Bosch’s Cross-Domain Computing Solutions division.

This is just the beginning
During the course of the year, ŠKODA will add further functions to the Traffication Infotainment App. In the third quarter this will include messages about weather and road conditions as well as the option of having the system read notifications out aloud. In addition, drivers will then be able to report hazards themselves. Other planned improvements include advanced prediction algorithms, and improved performance for the automatic detection of potential hazards. Currently in preparation and due to follow in the fourth quarter of 2021 are additional types of notification and advance information for a driver’s frequently used routes. “In the next year, we plan to integrate the app with a C2X (Car-to-X) system that is able to communicate directly with other cars and with infrastructure in the vicinity. This will allow immediate receipt of notifications from smart city systems or warnings from nearby emergency vehicles,” Vondra adds.

Just one click away
Installing the app is a very straightforward process and can be done from within the vehicle, via the Shop. The application is free until the middle of the year; continued use after that will incur a small annual fee. The Traffication Infotainment App is available for vehicles equipped with the top infotainment systems based on the third-generation Modular Infotainment Matrix. The app is compatible with the Columbus system in the ŠKODA models SUPERB, KODIAQ and KAROQ, and the Amundsen system in the KAMIQ and SCALA. Due to follow in the third quarter of 2021 are the Amundsen system in the FABIA and the Columbus system in the OCTAVIA. All other ŠKODA models – including the ENYAQ iV – equipped with the relevant top systems from the third infotainment generation will be added to the line-up in the fourth quarter of 2021. For now, the app is available in 23 European countries: the Czech Republic, Germany, the UK, Austria, Belgium, Denmark, Estonia, Finland, France, Iceland, Ireland, Latvia, Liechtenstein, Lithuania, Luxembourg, Monaco, the Netherlands, Norway, Poland, Spain, Sweden, Switzerland and Italy. Further European countries will be added in the second half of the year.