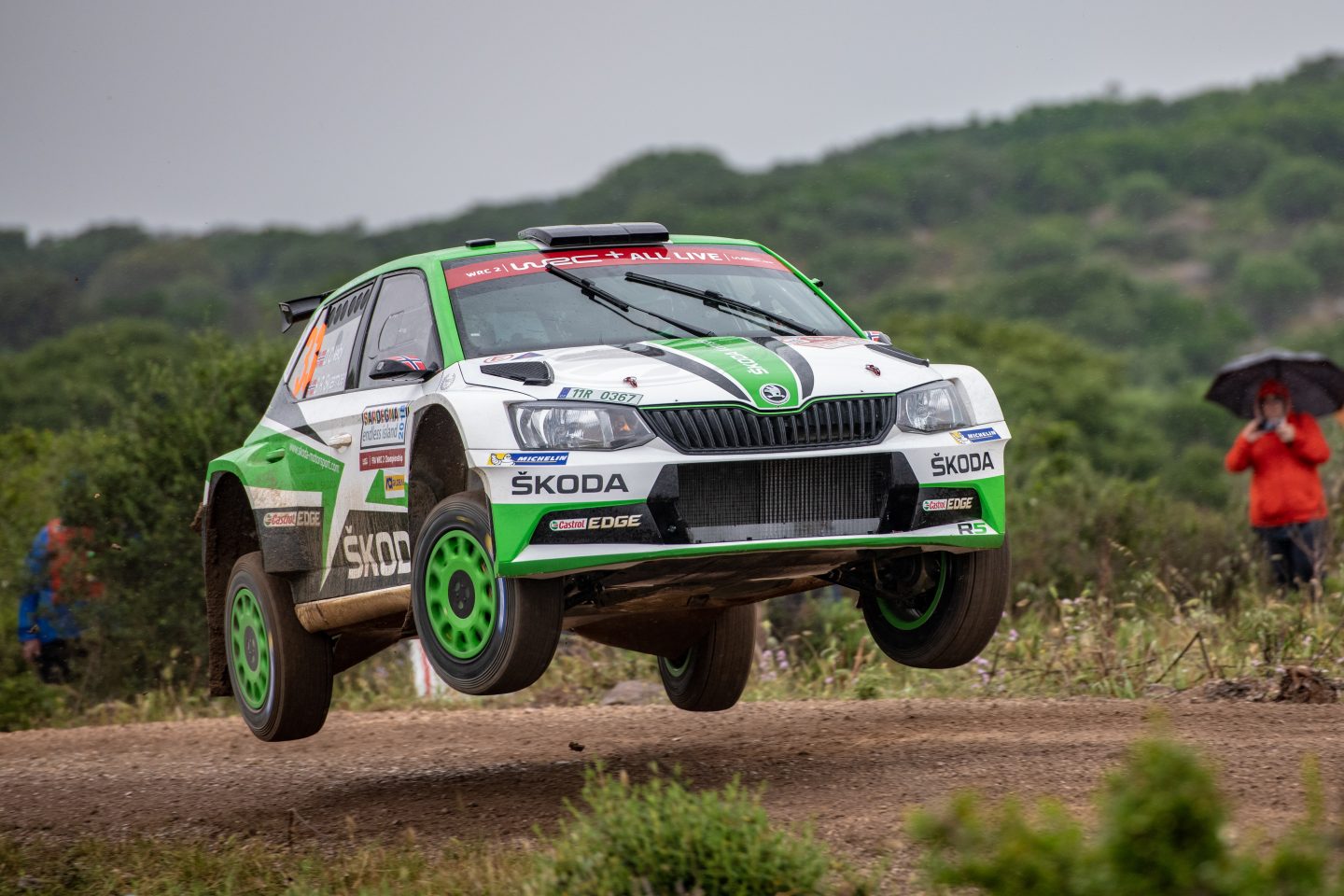 › At the FIA World Rally Championship’s eighth round ŠKODA juniors Ole Christian Veiby and Stig Rune Skjaermœn want to reduce the gap to the leaders in the WRC 2 category
› Also driving a ŠKODA FABIA R5, teammates Kalle Rovanperä/Jonne Halttunen aim for victory in the WRC 2 category on their home round
› ŠKODA so far won six out of seven rounds of the WRC 2 Championship 2018

Mladá Boleslav, 18 July 2018 – While the WRC 2 category leaders of the FIA Word Rally Championship, reigning Champion Pontus Tidemand (SWE) and his ŠKODA teammate Jan Kopecký (CZE), as planned do not compete at Neste Rally Finland (26/07/–29/07/2018), all eyes are on the ŠKODA junior crews Ole Christian Veiby/Stig Rune Skjaermœn (NOR/NOR) and Kalle Rovanperä/Jonne Halttunen (FIN/FIN). At Rally Finland 2017 already, O.C. Veiby was leading the RC 2-class in a private ŠKODA FABIA R5, before he went off the road. The Norwegian is currently third in the WRC 2 category standings. His 17 years old teammate Kalle Rovanperä will make his debut at the Finnish round of the FIA World Rally Championship. Both ŠKODA youngster crews are among the top favourites for victory in the WRC 2 category at the fastest round of the FIA World Rally Championship. 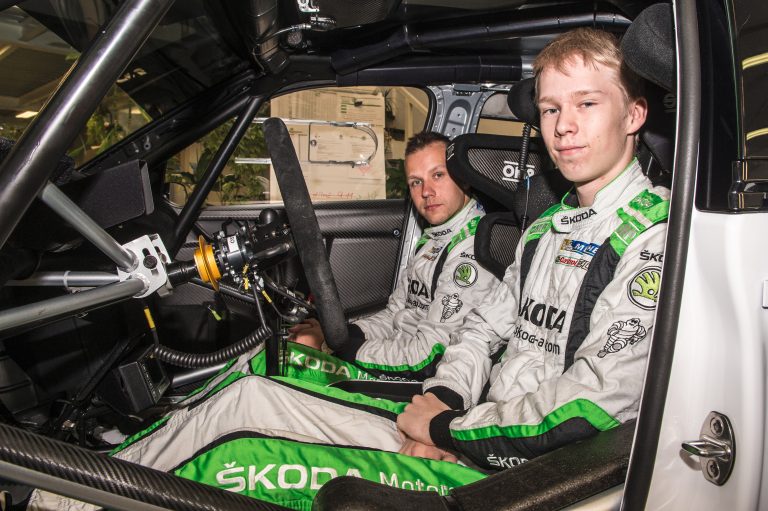 In the WRC 2 category of the FIA World Rally Championship, registered competitors have to nominate seven out of 13 rounds as points scoring events. In the end only the six best results count. As both category leader Pontus Tidemand (93 points and four starts) and runner-up Jan Kopecký (75 points/three starts) did not nominate the Finnish round for their championship campaign, the two experienced ŠKODA factory drivers will be absent.

So their young teammate O.C. Veiby, who with 45 points is third in the current championship standings, can close the gap to his teammates with a good result in Finland. “The stages of Rally Finland are a big challenge, the speed on the smooth gravel roads is enormous. You have to be fully concentrated all the time and need to ‘read’ the road to identify the different grip levels. Once you do a little mistake, being a little bit too fast and miss the proper line – you are out of the rally. This happened to me last year while I was leading the RC 2 class. In a fast right hander, I slid off the road with my privately entered ŠKODA FABIA R5,” described Ole Christian Veiby who in 2018 already delivered impressive results in the WRC 2 category, finishing second at Rally Italy, third in Sweden and fourth at Rally France.

Another man to watch is the youngest competitor of the FIA World Rally Championship, 17 years old Kalle Rovanperä. He proved his impressive speed not only at Rally Argentina where he was in the lead for a while. “I drove a car for the first time on private roads close to my hometown. But I collected my first competition experience in Latvia, a country which has gravel roads similar to Finland, because I was allowed to participate in rallies without having a driver’s licence. This year, driving a factory entered ŠKODA FABIA R5 for the first time at Rally Finland, is really very special for me”, says the young Finn and describes the special challenge of the upcoming round of the championship and Rovanperä adds: “In Finland, it is very important that the car is stable and easy to control in the high-speed corners and the huge jumps. The challenge for the setup is to tune the suspension in a way that the wheels keep on the ground and that the car has as much traction as possible. Once your car has all wheels in the air, you can’t accelerate or brake anymore.”

ŠKODA Motorsport boss Michal Hrabánek is not only delighted about the remarkable success of ŠKODA Motorsport in the 2018 season by winning six out of the seven rounds of the WRC 2 championship. He is as well impressed by the number of crews competing with a ŠKODA cars at Rally Finland. “The RC 2 class, which the WC 2 category is a part of, is extremely popular in Finland. The entry list shows five different manufacturers. And we are proud to see, that out of the 32 crews 18 are competing with a ŠKODA FABIA R5 and one with a ŠKODA FABIA S2000, which makes ŠKODA the most popular brand in the category and shows the trust our customers have in the leading technology of our ŠKODA FABIA R5”, emphasizes Hrabánek.

Neste Rally Finland offers 23 special stages totalling more than 317 kilometres mostly on fast and smooth gravel roads featuring numerous jumps. Due to the high-speed passages, the Finnish round of the FIA World Rally Championship is sometimes described as “Finnish Gravel Grand Prix”. After the Super Special Stage on Thursday in the streets of Harju close to the Rally Centre in Jyväskylä, the Friday leg will run over ten special stages of around 126 kilometres. The longest day of the Rally will be on Saturday with eight special stages covering nearly 143 kilometres. Sunday will bring the final decision with four stages, before the winner will reach the podium at Jyväskylä around 16h00 local time.

…the event first took place in 1951 under the name “Jyväskilän Suurajot”?

…the event was called the “Rally of the Thousand Lakes” from 1959 to 1996, before it was re-named Rally Finland?

…in 1973 the “Rally of the Thousand Lakes” was included in the calendar of the then new FIA World Rally Championship?

…the biggest jump ever was achieved 1975 by former rally cross driver Jusso Kynsilehto, who (with legendary British motoring journalist Martin Holmes as co-driver) jumped 72 metres? Unfortunately, there was no road on the landing point and they rolled four times?

…the rally ending Power Stage, the eleven kilometres of “Ruuhimäki”, according to the event organizer will have a real flying finish with a so called “monster jump”?

…Finnish drivers so far won 55 out of the 67 editions of their home round?

…in 2004 on the famous Ouninpojah stage Petter Solberg exceeded the maximum average speed of 130 kph tolerated by the sporting authority FIA? As a consequence, the organizers split the stage into two parts and in the upcoming years even introduced chicanes in order to reduce the average speed.