› From the racetrack to the road: MONTE CARLO models recall the Czech car manufacturer’s motorsport successes
› ŠKODA’s portfolio of sporty lifestyle variants soon to be expanded
› This is now the third MONTE CARLO version in the ŠKODA FABIA’s successful history

Mladá Boleslav, 8 February 2022 – The new ŠKODA FABIA MONTE CARLO will be making its debut on 15 February. This is the third model in the Czech car manufacturer’s current range of sporty lifestyle variants with the MONTE CARLO designation: Like the SCALA and the KAMIQ, the new FABIA in this equipment variant again focuses on the signature dynamic appearance with which ŠKODA AUTO commemorates its numerous motorsport successes at the Monte Carlo Rally. The new vehicle is the third MONTE CARLO variant in the history of ŠKODA’s entry-level model.

Monte Carlo – the name honours ŠKODA’s numerous motor racing successes at the legendary rally in the Principality of Monaco. Recently, the FABIA Rally2 evo achieved its fourth victory there for ŠKODA in the past six years in the WRC2 category, and the brand’s 15th class victory overall. Since 2011, ŠKODA has commemorated these successes with sporty lifestyle versions of various compact model series – a tradition now continued by the new ŠKODA FABIA MONTE CARLO. Debuting on 15 February, the new top-of-the-range FABIA model will be joining the Active, Ambition and Style trim levels.

ŠKODA’s MONTE CARLO DNA
Born on the racetrack, built for the road – it’s in the DNA of ŠKODA’s MONTE CARLO models: sporty lifestyle versions of various ŠKODA compact model series share this designation that the Czech car manufacturer introduced 86 years ago. To celebrate the ŠKODA POPULAR’s second place in the class up to 1,500 cm3 at the 1936 Monte Carlo Rally, the company released a limited-edition series of 70 ŠKODA POPULAR MONTE CARLO vehicles at the time. The first double victory at the Monte Carlo Rally came in 1977 with the legendary ŠKODA 130 RS in the class up to 1,300 cm3. In the 1990s, the FAVORIT and the FELICIA also achieved double victories before the ŠKODA FABIA’s outstanding rally career began. Several podium finishes were followed by the ŠKODA FABIA SUPER 2000’s class victory at the 2013 Monte Carlo Rally. Its successor, the FABIA R5 (Rally2), won the WRC2 category in Monte Carlo in 2017 and 2018. The updated ŠKODA FABIA Rally2 evo repeated this double success in 2021 and 2022.

The new ŠKODA FABIA MONTE CARLO is the third production version of this model series to bear the sporty designation. In 2011, ŠKODA introduced this variant for compact series models with the second-generation FABIA, before the third FABIA generation followed suit in 2014. The fourth-generation ŠKODA FABIA is the third model to join the Czech manufacturer’s portfolio of sporty MONTE CARLO lifestyle variants, alongside the ŠKODA SCALA and ŠKODA KAMIQ. 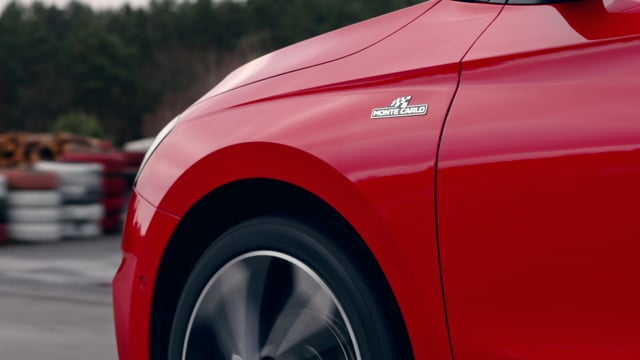