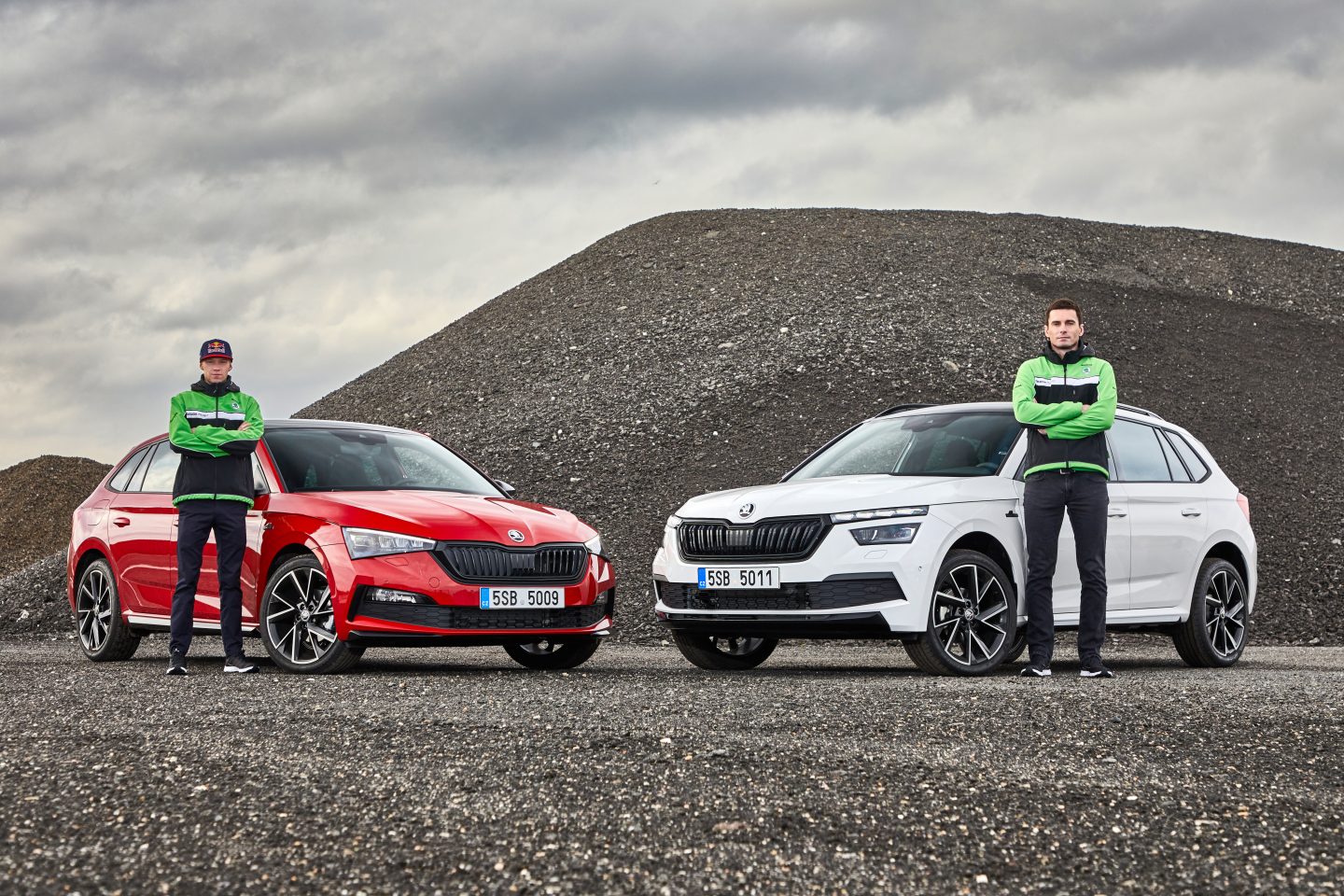 Mladá Boleslav, 26 November 2019 – Approved by the pros: the sporty new MONTE CARLO versions of the ŠKODA SCALA and ŠKODA KAMIQ have made a great impression on World Rally Champions Kalle Rovanperä and Jan Kopecký. The two ŠKODA Motorsport works drivers took to the roads of Czechia to give the SCALA MONTE CARLO and the KAMIQ MONTE CARLO an intense workout and select their personal favourite. The two sporty lifestyle models reference the brand’s successful rally history and impressed the pro drivers every inch of the way. Production of the new MONTE CARLO variants at the main plant in Mladá Boleslav is already under way, and the first customers can look forward to receiving their vehicles before the end of the fourth quarter of 2019.

ŠKODA could not have wished for more high-calibre test drivers to put the new MONTE CARLO versions of the ŠKODA SCALA and ŠKODA KAMIQ through their paces and assess their sportiness and everyday usability. The two ŠKODA works drivers, Jan Kopecký and Kalle Rovanperä, count among the world’s best rally drivers in their class. Czech Jan Kopecký won the 2018 WRC 2 World Championship, while his young Finnish teammate Kalle Rovanperä has already secured his 2019 WRC 2 Pro World Champion title*. During the season’s penultimate race in Spain, the duo also ensured victory in the WRC 2 Pro Manufacturers’ Championship for ŠKODA Motorsport*. The WRC trophies will be awarded at the grand FIA gala following the end of the racing season. Meanwhile, both rally drivers jumped at the chance to swap their familiar ŠKODA FABIA R5 evo for the sporty top variants of the compact production models – and pronounced themselves impressed with the qualities of the SCALA MONTE CARLO and KAMIQ MONTE CARLO.

“I immediately liked the ŠKODA SCALA MONTE CARLO’s extremely sporty lines. Due to the different chassis settings, the driver can take full advantage of the superb handling especially on twisting roads. This is also where the qualities of the seats particularly come into their own. They offer perfect lateral support while being very comfortable also on long-distance trips. What’s also cool is that the SCALA is always online and integrates my smartphone without a hitch,” says Kalle Rovanperä about the SCALA MONTE CARLO.

Jan Kopecký, on the other hand, is quite taken with the KAMIQ MONTE CARLO: “As a family man, I appreciate having plenty of space. In this respect, the ŠKODA KAMIQ MONTE CARLO meets my requirements to perfection, while impressing with sporting appeal in its exterior and interior design. Its compact dimensions and raised seating position ensure that this city SUV performs really well in urban areas. And when I want to have a bit more fun on the road without the kids, I can set the Sports Chassis Control to “Sport” and enjoy an even more agile car at the touch of a button.”

Numerous black MONTE CARLO features in keeping with tradition
ŠKODA uses the MONTE CARLO designation for the sporty lifestyle versions of its compact models – a tradition dating back to a limited special edition of the ŠKODA POPULAR released in 1936. In this context, Monte Carlo not only evokes the splendour and glamour of the Principality of Monaco, it also refers to the legendary motor racing tradition of the Monte Carlo Rally, an event that was first held in 1911 and has seen numerous ŠKODA successes over the years. A defining characteristic of today’s MONTE CARLO models consists in sporty black accessories. This includes, for example, a ŠKODA grille surround in glossy black for the SCALA MONTE CARLO and KAMIQ MONTE CARLO. Parts of the front apron, the exterior mirror caps, side sills, rear diffuser and the vehicle name – as well as the roof railing of the KAMIQ – also have a black finish. In addition, the black 17-inch standard Volans and 18-inch optional Vega alloy wheels feature a exclusive MONTE CARLO design.

Comprehensive equipment and sporty interior ambience
The comprehensive equipment for the SCALA and KAMIQ MONTE CARLO models includes a panoramic roof, black roof lining, sports seats with integrated headrests and pedal trims with an aluminium design. The multifunction sports steering wheel is covered in perforated leather bearing the same red decorative seams as the leather finish for the gear selector and handbrake lever, perfectly complementing the LED ambient lighting, which also has a red theme. The ŠKODA SCALA MONTE CARLO and the ŠKODA KAMIQ MONTE CARLO are both available with the model series’ complete range of engines. 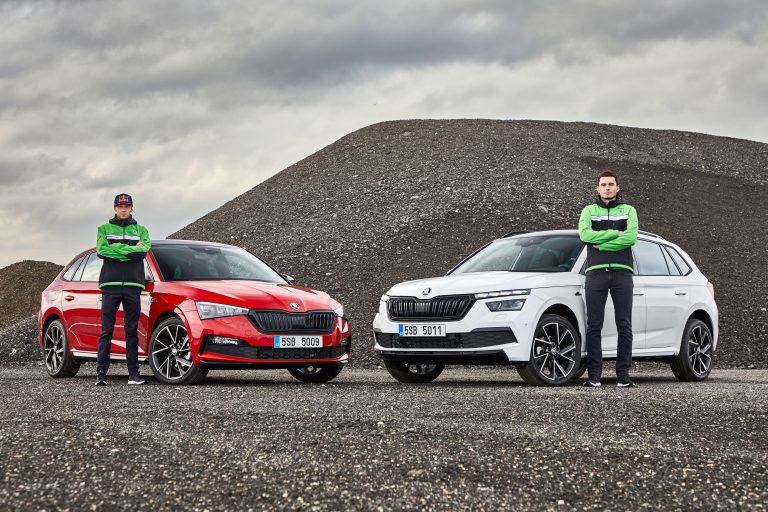 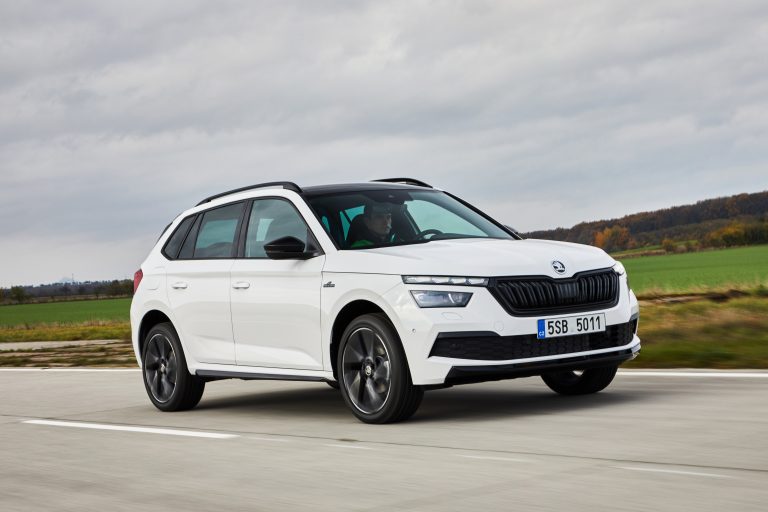 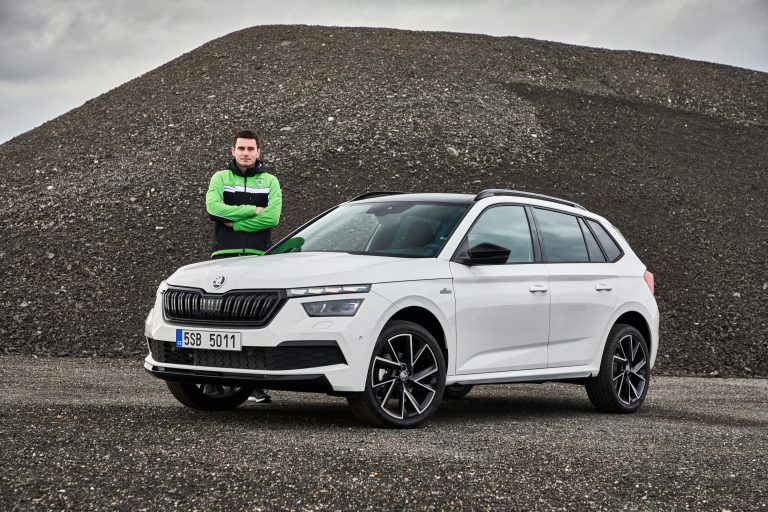 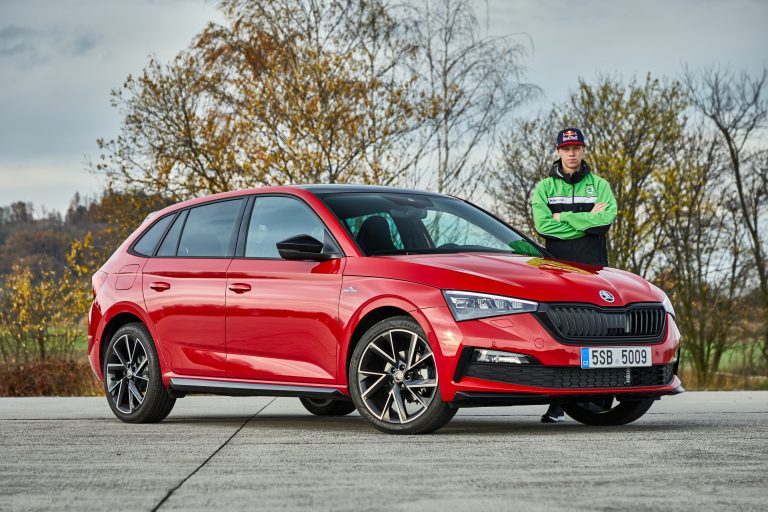 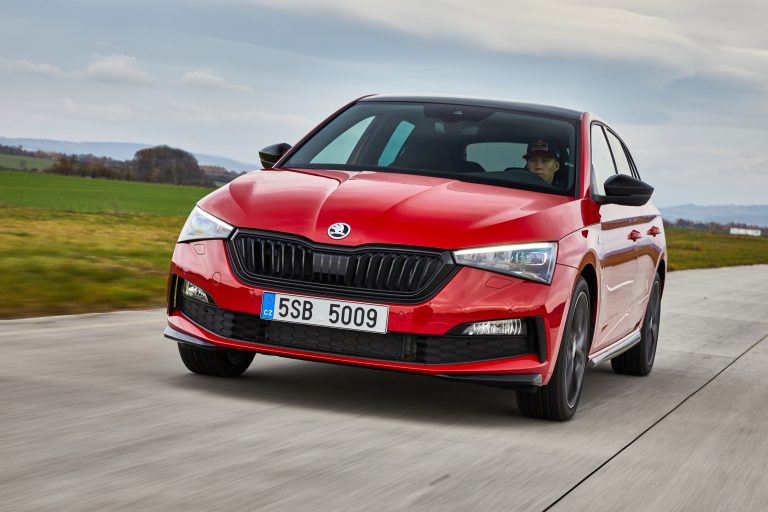 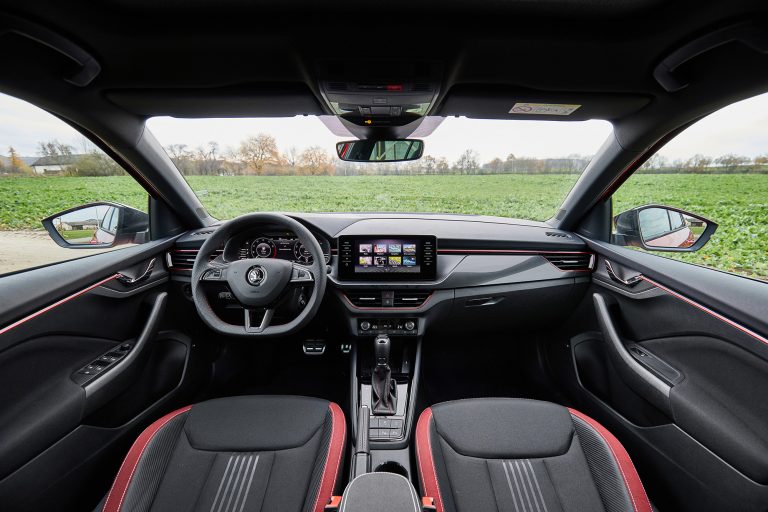 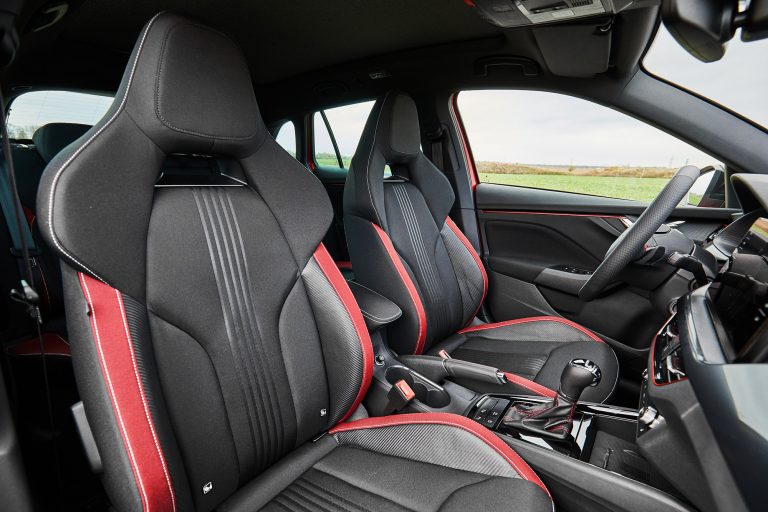 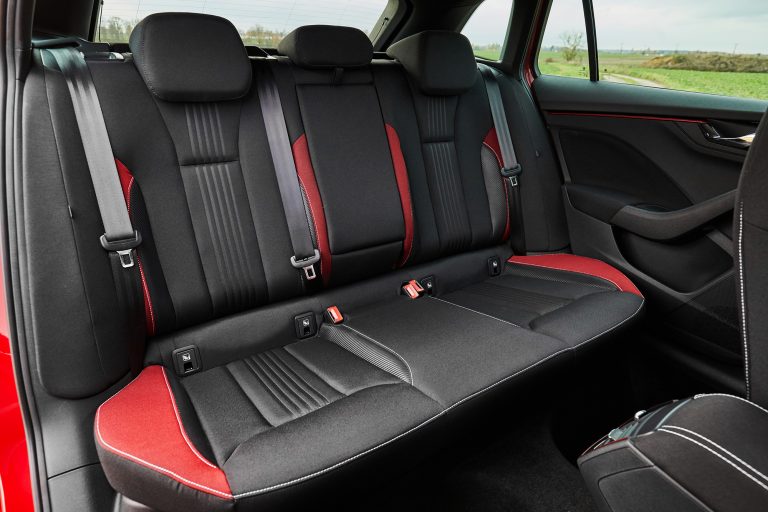 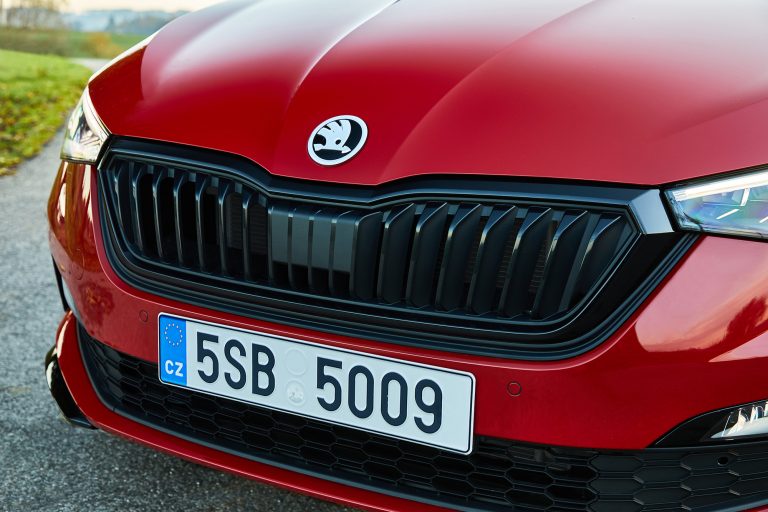 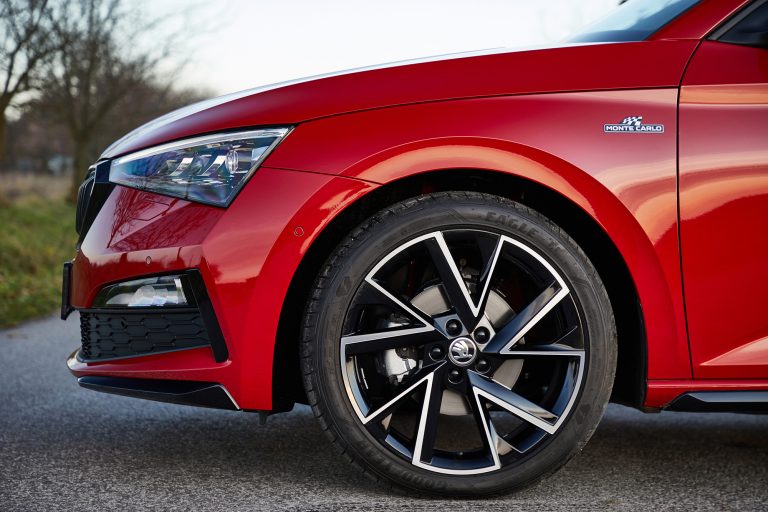 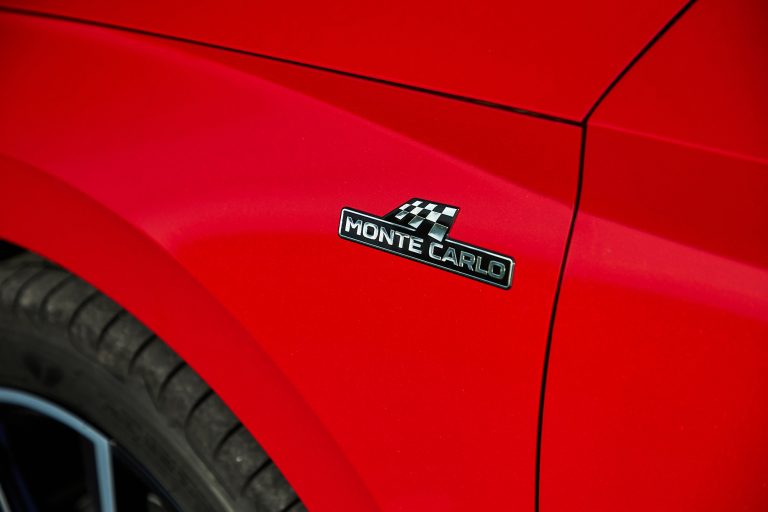 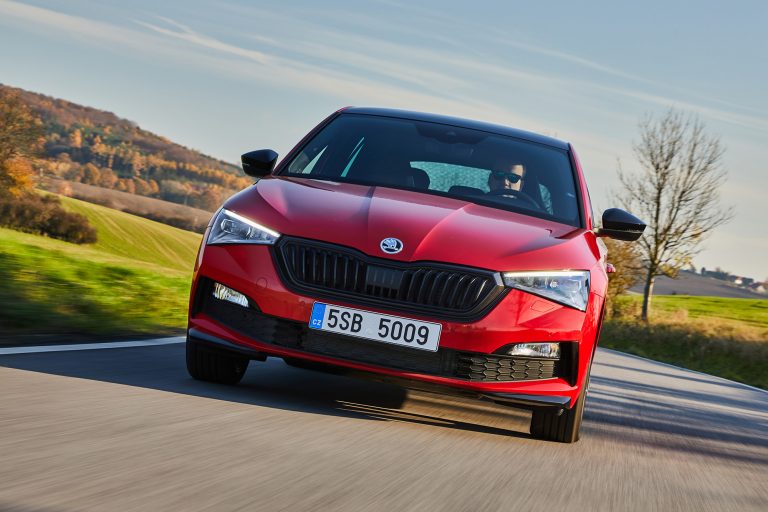 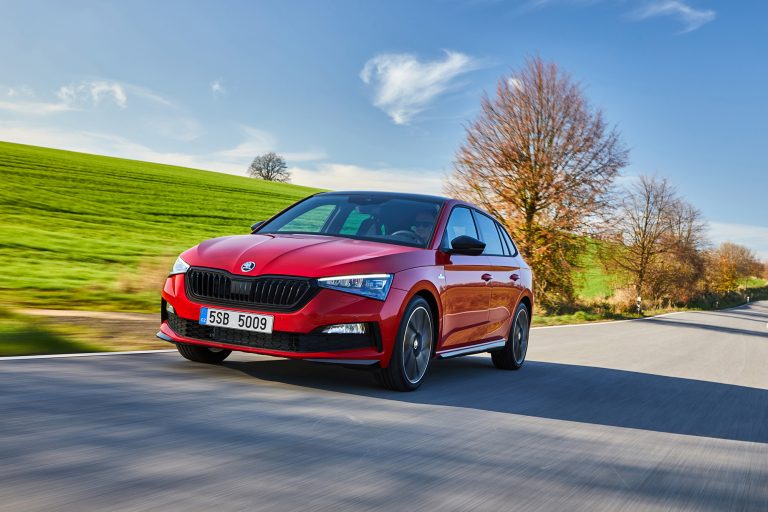 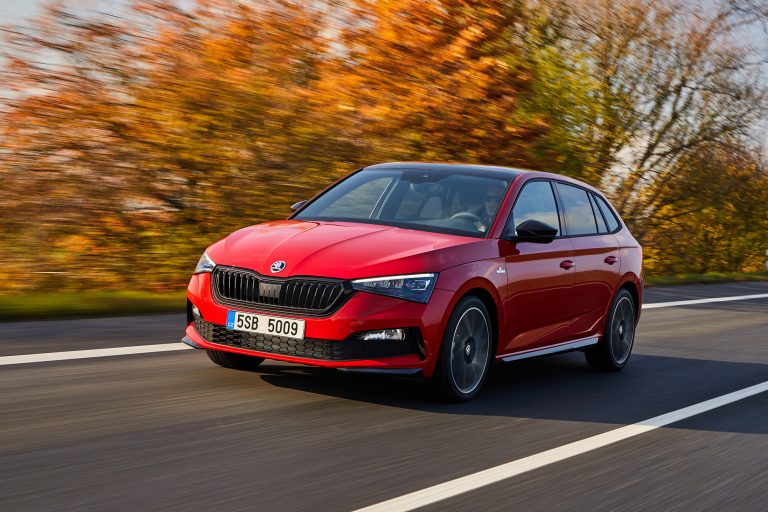