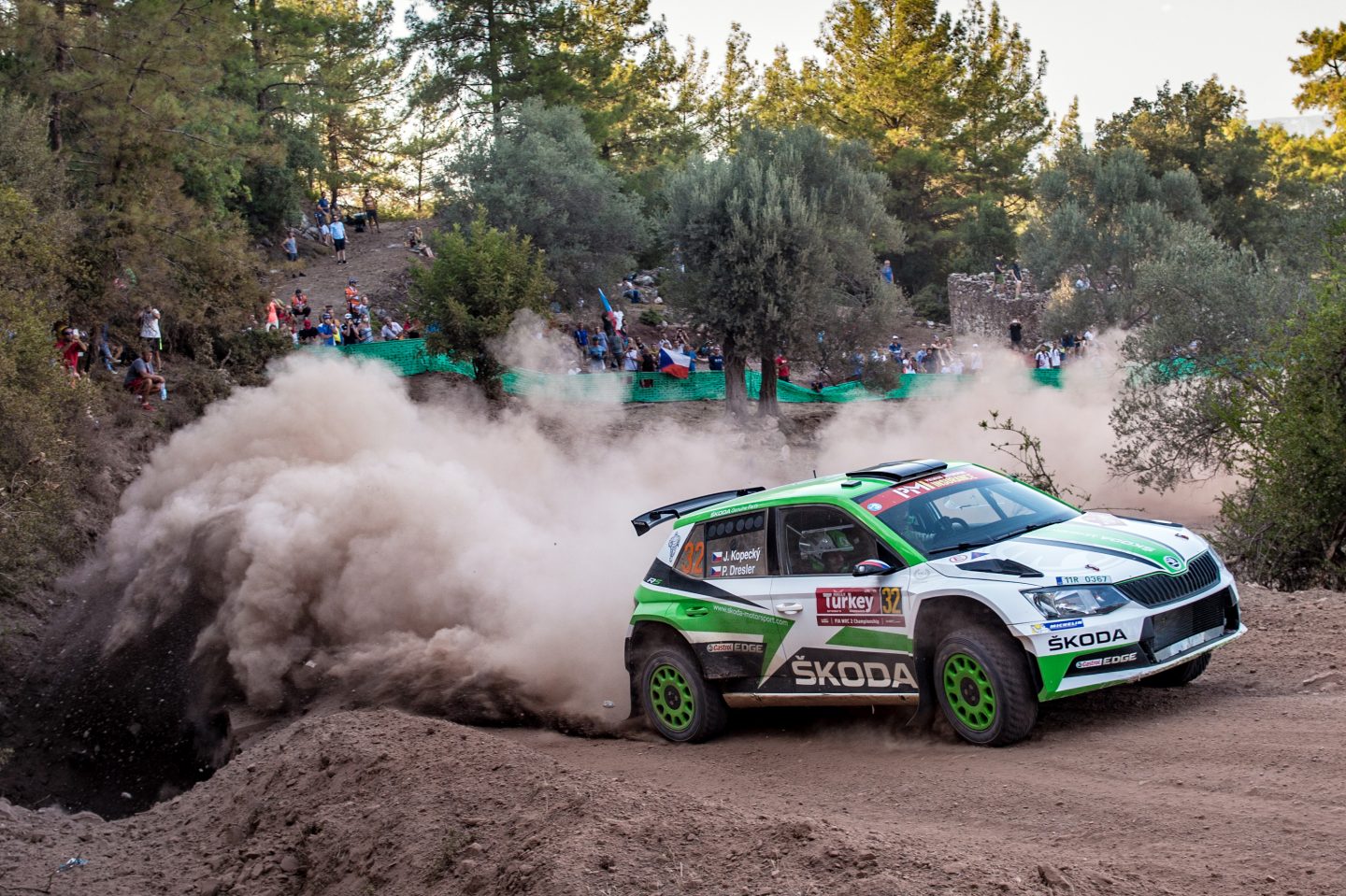 › With two rallies to go, ŠKODA works crew Jan Kopecký/Pavel Dresler is uncatchable in the WRC 2 overall standings of the FIA World Rally Championship 2018
› ŠKODA Motorsport prematurely conquered the WRC 2 Championship for Teams for the fourth time in a row
› After WRC 2 victory at the recent Wales Rally GB, ŠKODA youngsters Kalle Rovanperä and Jonne Halttunen aim for another category win at championship’s 12th round in Spain
› ŠKODA Motorsport boss Michal Hrabánek: “We are very proud that we could defend both WRC 2 Championship titles for drivers and teams.”

Mladá Boleslav, 23 October 2018 – ŠKODA’s Jan Kopecký and Pavel Dresler will enter the upcoming RallyRACC Catalunya-Rally de España (25/10/–28/10/2018) as newly crowned WRC 2 champions. With only two rallies left in the 2018 season, the Czech duo is uncatchable in the WRC 2 overall standings. Also, ŠKODA Motorsport already secured the WRC 2 Championship for Teams. (both titles subject to official publication of the results by the FIA) ŠKODA junior Kalle Rovanperä and co-driver Jonne Halttunen (FIN/FIN) compete for the first time in Spain and aim for another top result after their maiden WRC 2 win for ŠKODA at the recent Wales Rally GB.

ŠKODA Motorsport boss Michal Hrabánek is more than happy with his team’s 2018 season: “We saw a fantastic fight between Pontus Tidemand and Jan Kopecký for the WRC 2 championship. We equally granted six rallies to both drivers. Jan is doing his rally number six in Spain. He can’t be caught by Pontus anymore, because he has already done six events. We are very proud that we could defend both WRC 2 Championship titles for drivers and teams, ŠKODA crews winning ten out of eleven rounds of the WRC 2 championship 2018 so far. We warmly welcome Volkswagen entering the R5 competition for the first time with the Polo in Spain.” For ŠKODA Motorsport, RallyRACC Catalunya-Rally de España marks the end of a successful season. The final round of the FIA World Rally Championship, Rally Australia, never was part of the team’s 2018 program.

One of the toughest rivals for new WRC 2 champions Jan Kopecký and Pavel Dresler will be ŠKODA junior Kalle Rovanperä, who together with co-driver Jonne Halttunen recently won the WRC 2 category at Wales Rally GB right after his 18th birthday. “The victory in Wales was great. Hopefully we can keep this momentum into the Spanish WRC round to finish the season on a high,” says the young Finn.

Nevertheless, Kopecký also looks forward to Spain’s championship round with optimism. “I have a really fantastic season so far and could win every rally I was competing in, in total five WRC 2 events and six rallies of the Czech Rally Championship. Last year, I missed the victory in Spain. After all the championship pressure is gone now, I will try my best to settle that bill,” emphasizes the Czech champion.

As twelfth round of the FIA World Rally Championship, RallyRACC Catalunya-Rally de España offers a special challenge for the 21 WRC 2 crews, among them nine competing in a ŠKODA FABIA R5. The Spanish WRC round is the championship’s only mixed surface rally. The first leg on Friday is held on gravel roads with some tarmac sections. On Saturday and Sunday all stages are entirely run on asphalt. In total, the teams have to face 18 special stages totalling 331.58 kilometres of racing against the clock. The winner will reach the podium at the rally’s host town Salou in the south of Catalunya’s capital Barcelona at 14h01 on Sunday (local time).

…that on Friday evening the service time is 1:15 hours and thus 30 minutes longer than usual, allowing the teams to convert the cars from gravel into tarmac spec?

…that the spectacular Barcelona street stage is back as opener of RallyRACC Catalunya-Rally de España on Thursday evening?

…that at RallyRACC Catalunya-Rally de España the cars in WRC 2 category are allowed to use a maximum of 10 gravel tyres and 24 asphalt tyres plus an extra of four tyres for shakedown?

…that at RallyRACC Catalunya-Rally de España the service park is hosted by the PortAventura World Theme Park, featuring the spectacular Dragon Khan roller coaster with eight loops and a top speed of more than 110 kph? 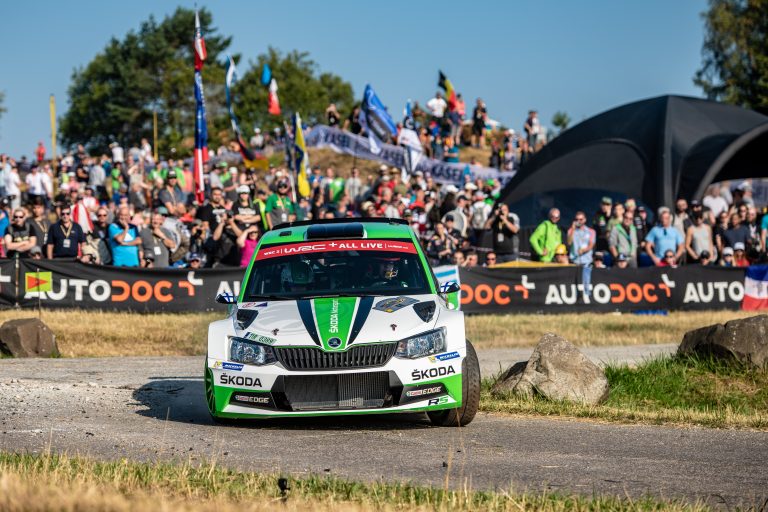 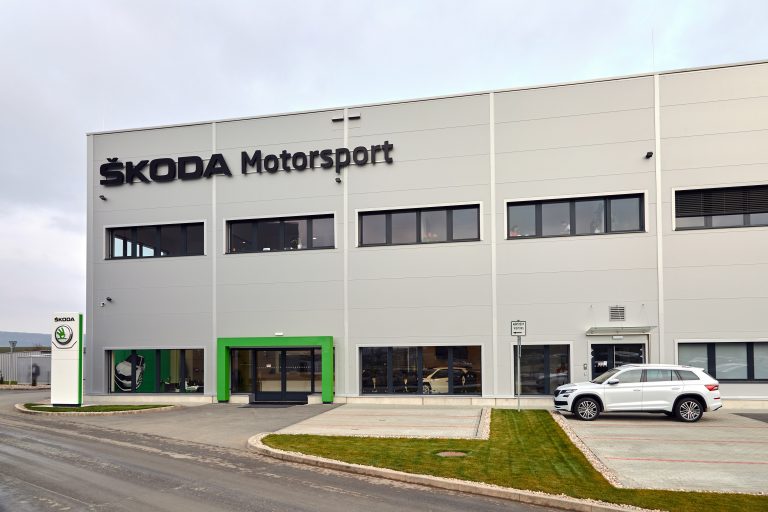