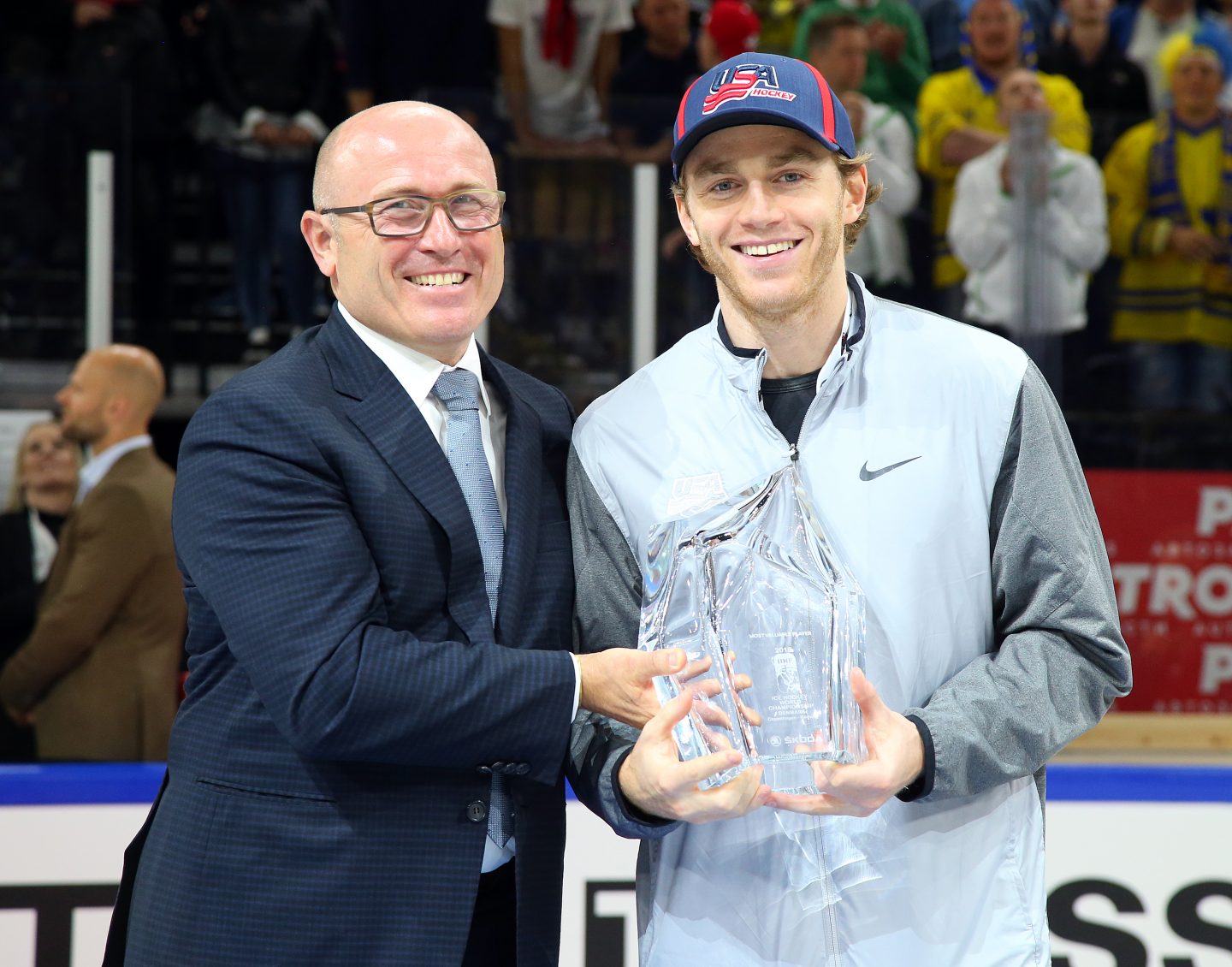 Mladá Boleslav/Copenhagen, 21 May 2018 – Sweden has won the 82nd World Championship held by the International Ice Hockey Federation (IIHF). After an outstanding performance, Patrick Kane from the USA was voted the Most Valuable Player (MVP). ŠKODA AUTO CEO Bernhard Maier presented him with a trophy after the final at the Royal Arena in Copenhagen, which was created for the first time by ŠKODA Design. This year, the traditional Czech brand was the main sponsor of the IIHF Ice Hockey World Championship for the 26th time in succession, and set a new world record for the longest main sponsorship of a world championship in sporting history.

The trophy presented by ŠKODA AUTO’s CEO Bernhard Maier for the MVP of the Ice Hockey World Championship was designed for the first time by ŠKODA Design. The sculpture measuring 33 centimetres tall and 21.5 centimetres wide was created in the Czech brand’s homeland and pays homage to traditional Bohemian glass art. Its crystalline features are also reflected in ŠKODA’s current models – for example in the headlights and taillights.

During the 82nd IIHF Ice Hockey World Championship, ŠKODA had an unmissable presence in and around the venues as the main sponsor. The manufacturer’s logo featured prominently around the rink and in play-off areas. Three eye-catching model highlights – the OCTAVIA COMBI RS, SUPERB and KAROQ – were positioned directly on the sidelines. In addition, ŠKODA was the exclusive partner of the ‘IIHF App’, which provided fans of the fastest team sport in the world with exciting background stories, as well as statistics and other information about the tournament.

ŠKODA AUTO and ice hockey enjoy a long-standing partnership: this is the 26th time in a row that the traditional Czech brand has supported the IIHF Ice Hockey World Championship as the official main sponsor. ŠKODA AUTO has received an entry in the Guinness Book of World Records for the longest sponsorship of a world championship in sports history. The Czech automobile manufacturer has been a vehicle partner to the major sporting event since 1992. In 2018, the fleet comprised a total of 50 vehicles, including the bestselling OCTAVIA, the flagship SUPERB and the SUV models KODIAQ and KAROQ.