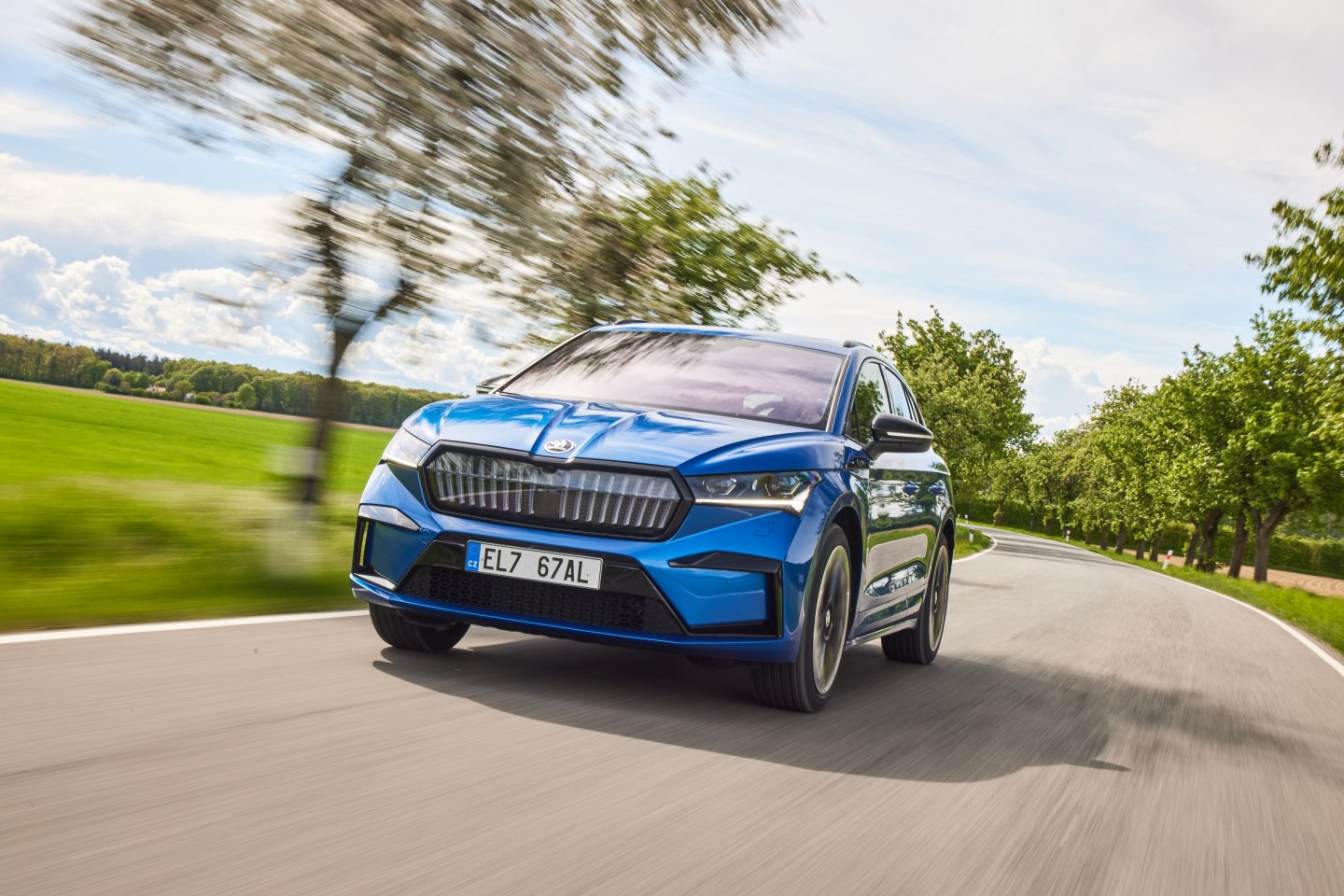 Mladá Boleslav, 25 February 2022 – A new software package increases the maximum practical range of the battery-electric ŠKODA ENYAQ iV family, shortens charging times, increases comfort and optimises operation. ŠKODA has been installing the new ME3 software version in the ENYAQ COUPÉ iV since production was launched in February 2022, and it is also being installed in all new ŠKODA ENYAQ iVs. ENYAQ iVs already delivered to customers will be updated to the new software version free of charge when visiting a dealership in the second half of 2022. Customers will receive further information about updating to the new software version shortly.

ŠKODA AUTO is optimising the vehicle software for its all-electric ENYAQ iV family with the launch of the new ENYAQ COUPÉ iV. The ME3 software version includes comprehensive updates to the function, control and design of the infotainment system, the Digital Cockpit and the Head-up Display. In addition, the ŠKODA Connect mobile online services have again been improved. Innovations in battery management deliver enhanced charging performance, shorter charging times and extended range. Just like the new ENYAQ COUPÉ iV, the ENYAQ iV SUV variant is also receiving the upgraded and optimised vehicle software. In the second half of 2022, ENYAQ iVs that are already on the road will also benefit from the new software. They will be updated to the latest version free of charge when visiting a dealership. 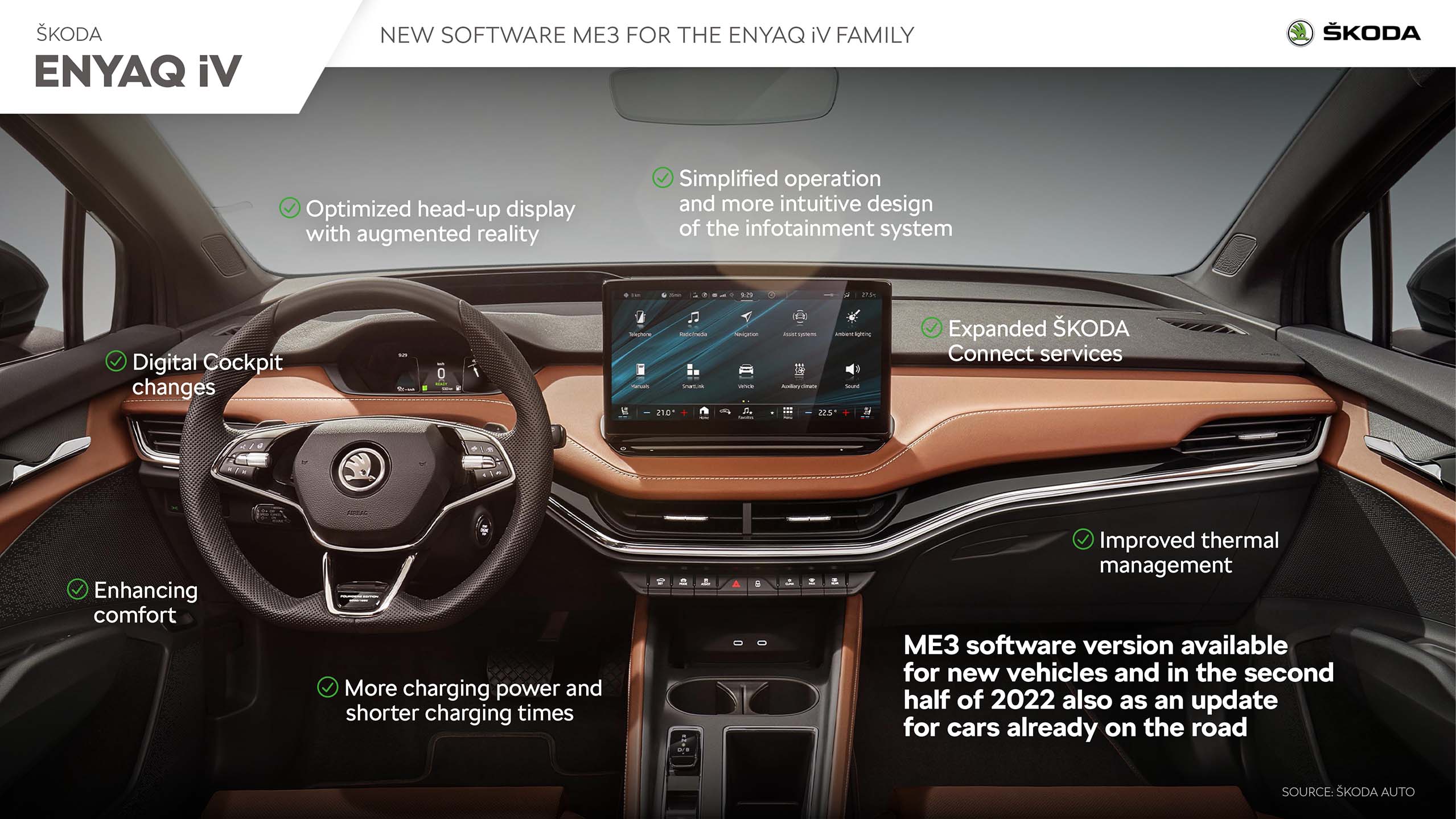 New ‘battery care’ mode protects the battery and extends its service life
The new ME3 vehicle software allows the driver to activate the new ‘battery care’ mode via a button on the central display. This means that the battery will only be charged to a maximum of 80 per cent when it is next plugged in. This measure, similar to the ‘eco mode’ on a smartphone, helps to conserve the battery and extend its life. If required, the full storage capacity of the battery and the maximum charging speed are always available. In addition, the ‘Charging’ menu in the infotainment system has been revised. The charging and range graphic now also includes information on the destination and any necessary charging stops.

New driving profile for all-wheel-drive variants, simplified planning for charging stops
The all-wheel-drive versions of the ENYAQ iV now also feature a new driving profile. ‘Traction mode’ is designed for driving on unpaved roads or slippery surfaces and provides constant all-wheel drive at speeds up to 20 km/h. Among other things, it adjusts the ASR function so that the traction control system intervenes less when pulling away. Charging control has also been made easier: In the navigation system, for example, an alternative charging station can be included in the current route simply by pressing the ‘Add’ button. For all planned charging stops, the remaining battery capacity and anticipated charging time are shown in detail.

Increased range thanks to improved thermal management
The temperature control of the battery is activated at lower temperatures than previously and is now continuously adjusted. This brings the drive battery into the ideal temperature window quicker and keeps it in this area for longer. This ensures a longer service life, optimised power output and more efficient recuperation and thus a longer maximum real range. In the ŠKODA ENYAQ COUPÉ iV 60, this increases to 416 kilometres in the WLTP cycle. The ENYAQ COUPÉ iV 80 can travel up to 544 kilometres; the ENYAQ COUPÉ iV 80x with two electric motors can cover 520 kilometres.

Higher charging capacities and shorter charging times
The ENYAQ iV family offers a wide range of charging options. Using alternating current and a CCS (Combined Charging System) plug, energy flows into the battery at up to 11 kW with ŠKODA iV Charger wallboxes at home, for example, and can charge the 62 kWh battery from 10 to 80 per cent of its capacity in 6.25 hours; the 82 kWh battery would take 7.5 hours. The iV Universal Charger, a mobile charging solution with interchangeable connectors, offers maximum flexibility. With the CEE adapter, 400V power sockets at up to 11 kW can also be used, while a Schuko adapter enables charging at 230V household sockets. When charging with direct current, vehicles with the 62-kWh battery now have a charging power of up to 120 kW thanks to the new software, and up to 135 kW for ENYAQ iV models with the large 82 kWh battery. This means that at a public 50 kW charging station, the charging process takes 55 minutes (62 kWh battery) or 70 minutes (82 kWh battery) from 10 to 80 per cent. At a fast charging station, the ENYAQ iV 60 with 120 kW charging power and the ENYAQ iV 80x with the large battery and charging power of 135 kW can complete this charging process in 35 minutes.

New software offers further improvements to comfort
The new software also offers additional support for parking by increasing the brightness and contrast of the rear-view camera display. The Travel Assist control button on the right spoke of the multifunction steering wheel now also responds to repeated presses and is used to switch between two assistance system levels, such as between Adaptive Cruise Control (ACC) and Travel Assist when the vehicle is not on a motorway and ACC and Travel Assist with Lane Change Assist when the ENYAQ iV is on a motorway. 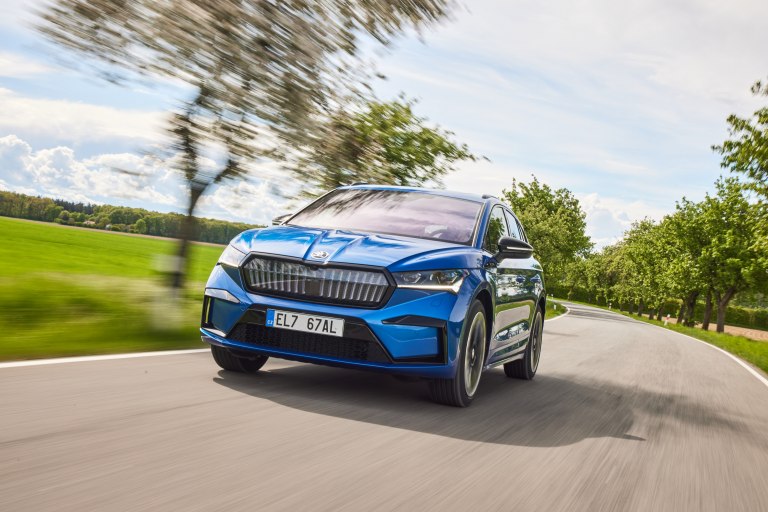