These days we take car horns for granted, but on the first cars a klaxon with a rubber bulb cost extra. Horns on today’s Škoda cars are tested up to half a million times.

If you were to delve into the sound archives and listen to recordings from, say, the interwar streets of Prague or some other peaceful city in Central Europe, you would probably be struck by the constant honking, which is more reminiscent of Sicily or Asia. The reason for this was simple – in driving schools at the time, learners were told not to forget to honk before every junction. The horn switch used to be located in the centre of a large bakelite steering wheel, for example, and had a noticeably weaker and somewhat hoarse sound compared to today’s horns.

A brighter tone was produced by the older bugle horns. The cheapest versions had a straight tube, while more luxurious vehicles had horns with elegant curves and polished surfaces reminiscent of their cousins in an orchestra’s wind section. Instead of blowing, the driver just had to squeeze a rubber bulb with his fingers. This (almost) musical instrument was installed near the dashboard, with the sound box located above the front bumper or directly under the windshield. Initially, the bulb was located outside the car body, like the gear lever and handbrake, but as drivers (and passengers) started demanding better protection from the weather, it was moved to the dashboard. It was a completely reliable device and easily repaired in an emergency.

But it was far from standard equipment at the beginning of the 20th century. The Laurin & Klement Voiturette A, the first car from Mladá Boleslav homologated in January 1906, made this clear in the price list with an asterisk: “The automobile prices shown here include tools and hand pump, but do not include horn, lights and roof.”

As traffic became heavier on the roads, and especially on the streets of larger cities, horns became an essential part of the ever faster cars. Of course, commercial vehicles, including buses, were also endowed with this sound signal device. The “song” of the car horn became a symbol of the modern age, and some Czech jazzmen performing in nightclubs reportedly even co-opted the car horn as a musical instrument.

Even before the First World War, the streets were full of the noise of bulb horns, their louder derivatives powered by exhaust gases, and even wailing mechanical sirens and the gradually emerging modern electro-mechanical horns.

The horns contained a diaphragm, initially vibrated by a mechanical cam, but soon replaced by a more durable and reliable electromagnet. A practical horn was introduced in 1908 by Lowell-McConnell of Newark, New Jersey, USA. It was invented by one Miller Reese Hutchison, who went on to be Thomas Alva Edison’s chief engineer.

The term klaxon itself is derived from Klaxon Signals Ltd of Oldham, England, which, although it did not invent the device, was instrumental in its widespread use in Great Britain and its then colonial empire. The word klaxon has its origins in the ancient Greek word klazō, meaning “I shout”. However, the designers had a major problem to solve: the lack of electricity. Automobiles at the time did not have dynamos and batteries, making do with a magneto powering the ignition barrel. So the original horns needed their own battery.

One of the pioneers of klaxon development was the German company of Robert Bosch, with whom Messrs Laurin and Klement were already in contact at the beginning of the 20th century. But it was not until after the First World War that Bosch’s 1914 patent protecting its own electric horn system was put into practice. The tricky problem of poor audibility at longer distances was solved by a trick taken from organ design: a second built-in diaphragm amplified the pair of tones so that the honking car could be heard up to two kilometres away.

Excessive street noise, totally out of line with the then normal maximum speed limit of around 30 km/h, led to the idea of introducing a pair of horns: the driver should primarily use the quieter of the two, resorting to a more forceful warning only when absolutely necessary. This idea failed to catch on, though. Instead, in the 1920s a special horn for fire trucks began to be used, with a switch between a lower and a higher tone, mimicking the pure fourth interval of the traditional horn to announce “Fire!”

For all models, the horn sound is set to the long-established frequency of 400-500 Hz.

Energy in a snail

In the 1920s, electric horns on board cars used to be backed up with the classic bulb horn. The simpler horns with a vertical diaphragm directly behind a perforated grille moulded from sheet metal found refuge under the bonnet, where they were better protected from the weather – but also forfeited some of their power. In the exposed areas under the headlamps there were powerful yet sleeker snail-shaped alternatives, which also didn’t let water in as easily. Their horizontal alignment also protected the membrane from damage.

In the 1950s, twelve-volt wiring replaced the six-volt system in Škoda cars, and foreign suppliers were replaced by domestic alternatives of the PAL brand.

However, as Lukáš Bačkovský from Škoda Auto Technical Development in Mladá Boleslav points out, the principle of the electro-mechanical horn has remained essentially unchanged for more than a hundred years. The classical horn design based on the principle of an electromagnetic converter in the magnetic field of a coil still prevails. The Škoda specialist explains: “The sound is carried via a mechanical switch onto a metal membrane. The tone can be adjusted, within a certain range, by means of a screw limiting how far the armature can be raised and how much pressure the spring exerts. A sounding board is fixed in front of the diaphragm, and this is vibrated by the armature striking the core of the electromagnet. The horn is always mounted in the front part of the car on a separate bracket to keep its frequency separate from the body structure.” 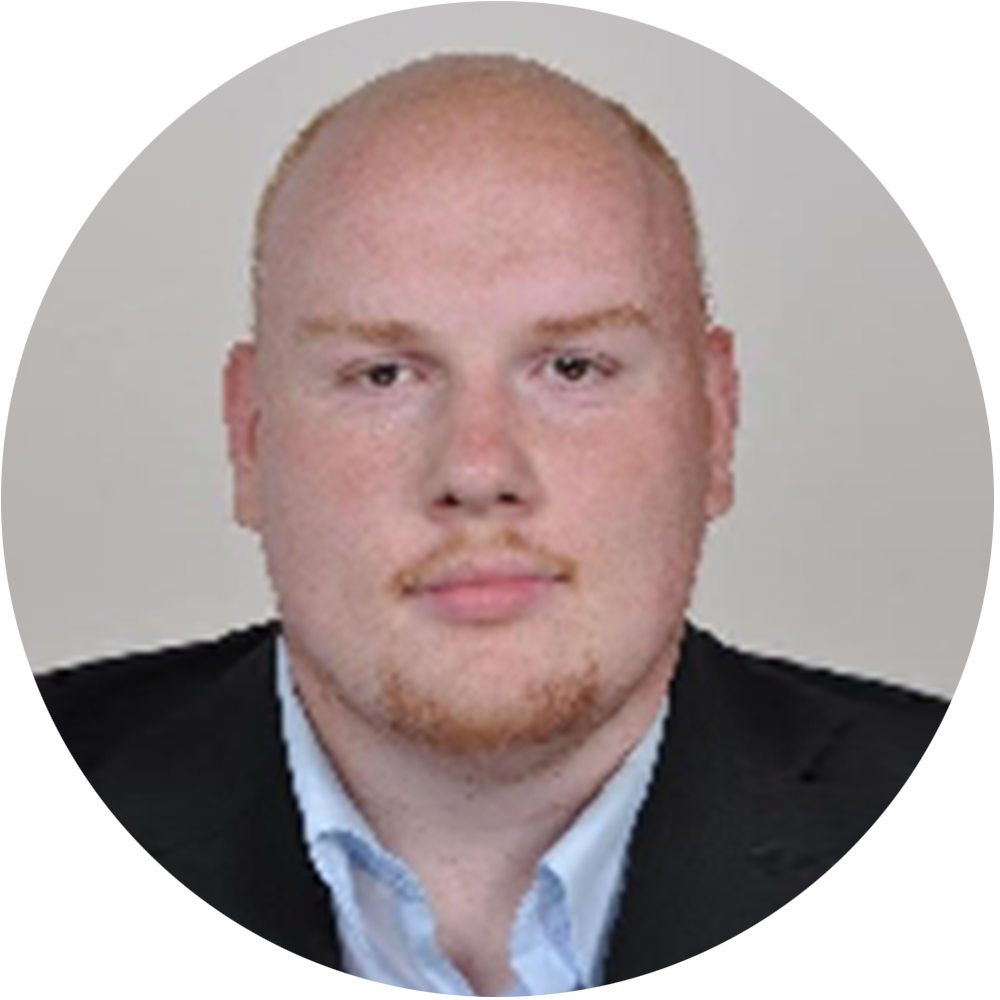 Horns’ technical development and growing demands on the reliability and durability of horns in Škoda cars can be seen in the number of duty cycles used to test these devices. “In 1976, 50,000 test blasts were enough for the horn in the Škoda 100; a quarter of a century later, the Škoda Fabia’s electro-mechanical horn had to endure twice as many cycles.” Lukáš Bačkovský adds, “The current all-electric Škoda Enyaq iV designed for European customers can handle 150,000 cycles and more – while on the version for the Indian market the horn is tested for half a million uses. And this is an electronic device with minimal moving parts. Because car horns are literally in constant use in India. A study carried out at major intersections in Indian cities found that a horn sounds every three seconds there.”

The warning sound of car horns has gradually stabilised over more than a century of development across markets and competing makes and models, and often consists of two simultaneous tones pitched between 400 and 500 Hz. This is a frequency that is easily detected by human hearing and is generally associated with warning signals.

What is still subject to development and regulation is sound pressure, i.e. loudness. This is measured at a distance of seven metres in front of the vehicle, where it is above 87 decibels, in line with the parameters laid down in Europe by the relevant legal regulation.

Developers’ and technicians’ attention therefore focused more on optimising the internal design of the horn and the materials used. The new models use plastic ends on the mechanical diaphragm. This is the aforesaid snail, which directs the sound to the selected area. The desired output is a full and clear sound – acceptable, yet urgent enough to fulfil a car horn’s basic function: to warn of danger and thus prevent accidents.

Travels around the steering wheel

In addition to a simple switch in the centre of the steering wheel, thin, usually chrome-plated rings within the steering wheel were popular from the 1920s to the 1960s. One alternative was an arc at the bottom of the steering wheel so as not to obstruct the view of the instruments, at least when driving in a straight line. The driver could see these circles or arcs much more easily than a small round switch and just had to stretch his fingers anywhere around the circumference from the steering wheel rim. The Škoda 1000 MB and its derivatives offered from 1964 onwards had a steering wheel with a horn activated by a thin stalk sticking out of the steering column. The system, with a button at the end of the left-hand stalk that controlled the direction lights, is familiar to veterans not only of this and related rear-engined Škoda models, but also to anyone who has driven the newer front-wheel-drive cars, such as the Škoda Favorit hatchback introduced in 1987, the later Forman estate and the derived Pick-up commercial vehicle. It was only in the mid-1990s, with the introduction of airbags in the Škoda Felicia, that the pair of buttons with the pictogram of a bugle moved to the steering wheel arms, away from its centre filled with the folded airbag and its firing mechanism. Subsequent developments have led to more modern airbag covers, so the horn is activated by pushing on a much larger area, a reminder of the practical inner rings of yore. 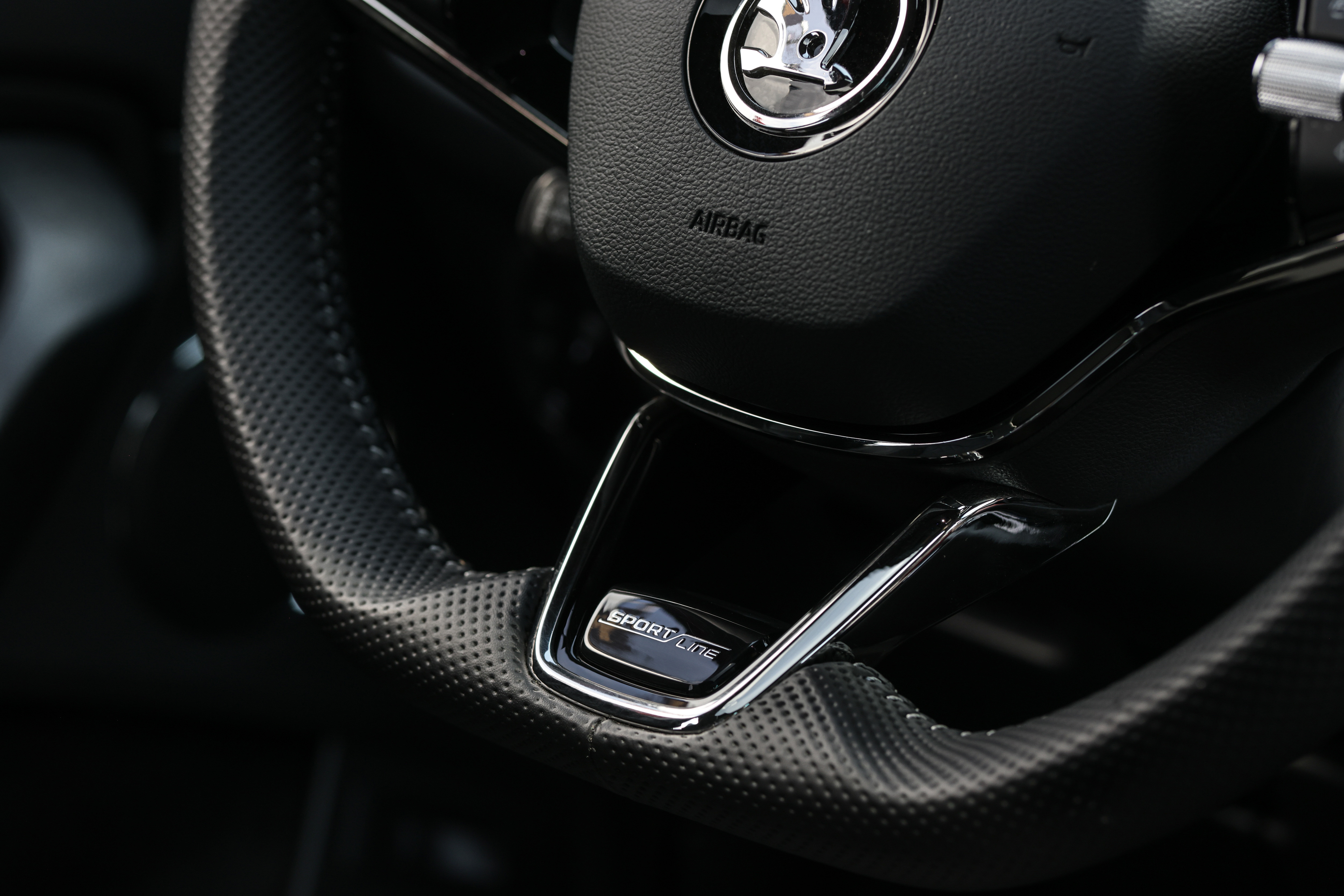 The three-spoke sports steering wheel of the Škoda Kodiaq Sportline with an array of integrated functions - including the horn in the centre beneath the airbag cover.

Next up in Hidden Helpers series 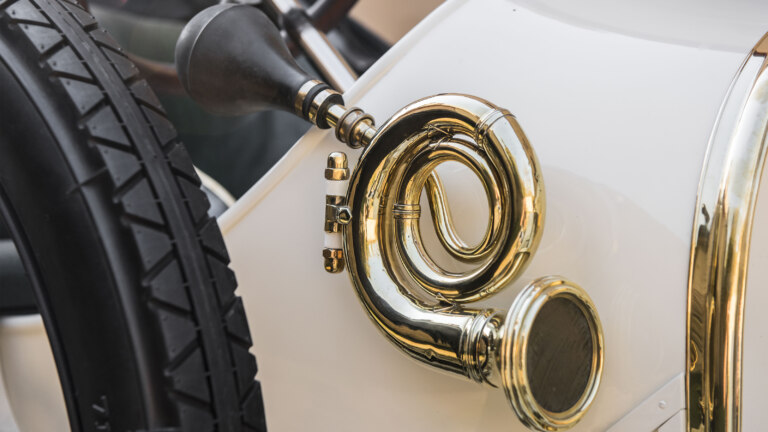 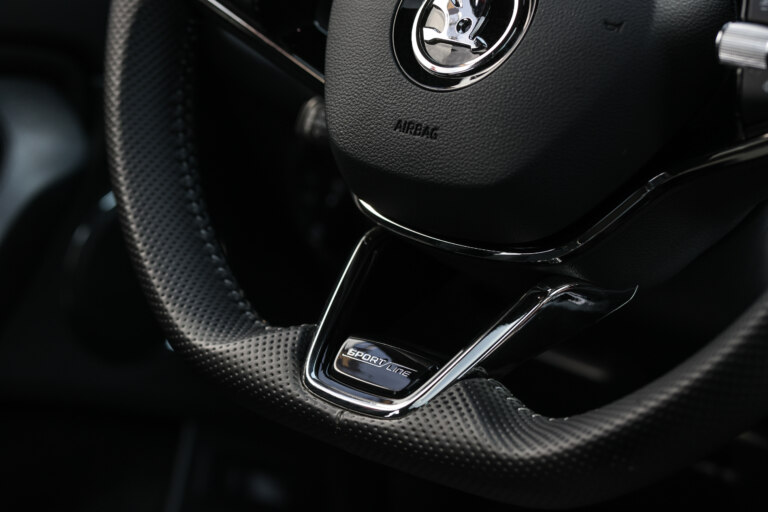