Electric cars’ range is a hot topic. Car manufacturers’ official figures are based on a standardised cycle that’s the same for everyone, just like for combustion engines. Let’s take a closer look at the abbreviation WLTP and what it means.

There is a lot of debate about cars’ range or fuel or energy consumption. The discussion often comes down to how “realistic” the figures that car companies give for their cars are. Because in the real world drivers notice deviations from the stated values. These deviations, however, are caused by a number of factors that are not entirely predictable and, above all, beyond the control of the car manufacturers. The practical range of electric cars, or the fuel consumption of a car, depends on a wide range of surprisingly variable factors. 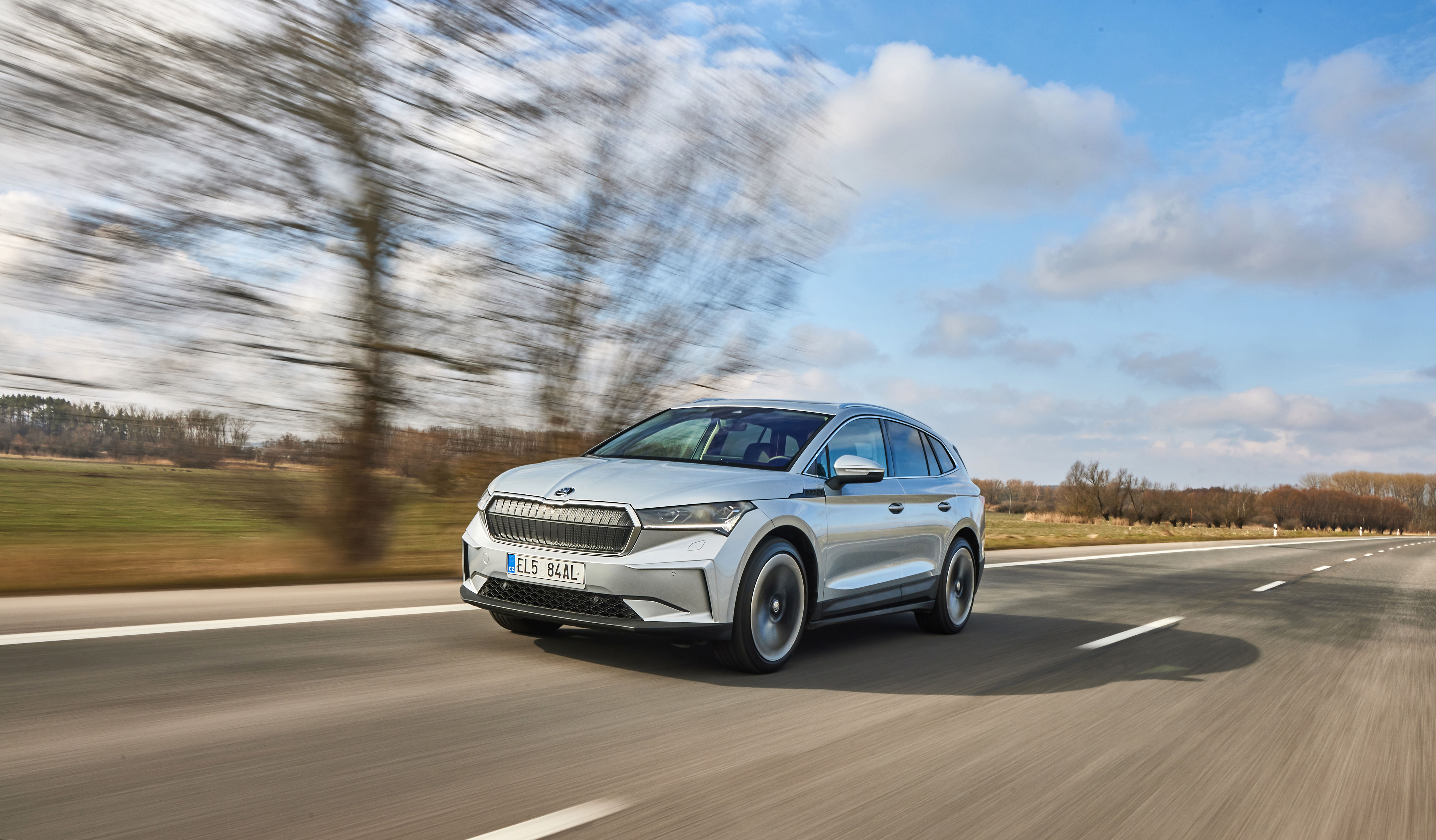 The ŠKODA ENYAQ iV’s range in the WLTP cycle is between 408 and 532 km, depending on the battery capacity.

Car companies are obliged to report the range of electric cars or the fuel consumption of cars with internal combustion engines according to a standard cycle. In the past, this was the NEDC cycle; currently, the WLTP or WLTC cycle is used (the WLTP standard includes the RDE cycle in real-life operation in addition to the WLTC laboratory cycle). The new cycle has been introduced mainly to make the claimed range or fuel consumption values better reflect the reality that drivers are able to achieve. WLTP thus uses higher speeds (up to 135 km/h and a higher overall average speed), is more dynamic and takes more account of the real weight of the car, among other things.

WLTP (Worldwide Harmonised Light Vehicles Test Procedures) is a set of test procedures used to homologate vehicles. It consists of a laboratory WLTC (Worldwide Harmonised Light-duty Vehicle Test Cycle) and a practical driving test known as RDE. The WLTC test lasts 30 minutes, during which the car is driven on rollers for a total of 23 kilometres at an average speed of 47 km/h. The cycle has four phases ranging in intensity from lowest to highest, in which the car exceeds a speed of 130 km/h, and this all takes place at a temperature of 14°C. The need for the car to be stationary is also taken into account, so the car spends 13% of the test, or just over three minutes, at rest. In addition, WLTP takes into account cars’ additional equipment, for which the carmaker must either test the consumption and range or recalculate it in the prescribed manner. The WLTP test is conducted with the air conditioning switched off.

The WLTC test cycle remains a laboratory exercise, however, precisely in order to ensure that the figures reported are comparable. This allows customers can compare range or consumption figures not only across models from the same carmaker, but also between cars from different brands. It is highly likely that, when comparing two models, a car with a higher claimed WLTP range will also have a higher range in practice. 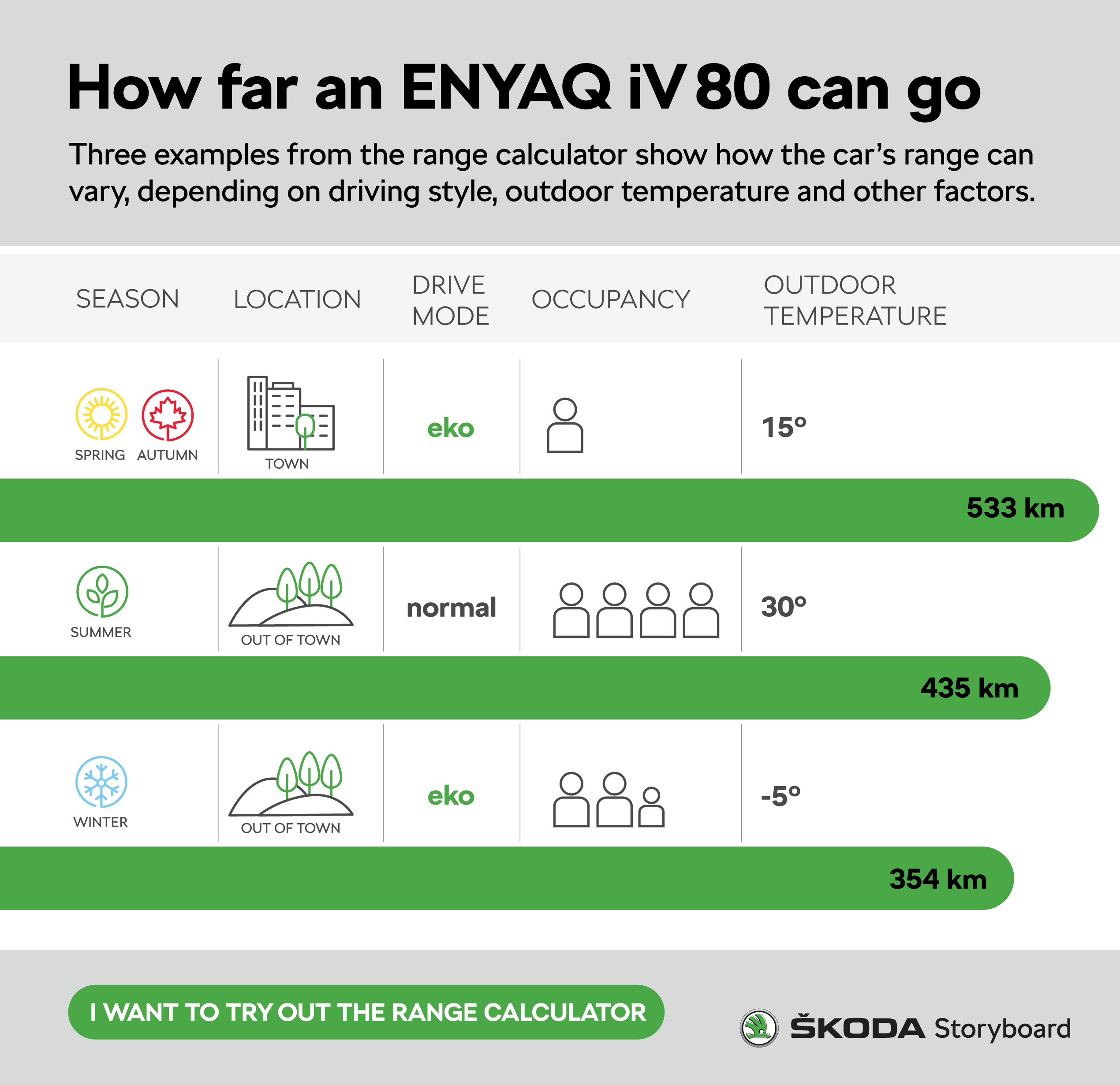 Having said that, the fuel consumption and range data reported by car manufacturers and observed in the standard cycle do differ from those achieved in practice. “The reasons for the deviations can basically be grouped into four categories. The first is the physics of the car, i.e. aerodynamics, weight, rolling resistance; the second is the ambient conditions, i.e. weather and outside temperature; the driver’s driving style is also important and, of course, the road profile, which can often be more demanding in practice than the test track,” says Jan Beneš, who specialises in customer test cycles at ŠKODA. “Generally speaking, smooth, anticipatory driving without rapid acceleration in warm weather with no wind and on a flat road with an unladen car results in lower fuel consumption and greater range,” says Jan Beneš.

But of course drivers don’t usually drive in such ideal conditions. When they do, they can actually achieve a longer range and better fuel consumption than the “factory” figures indicate. The proof of that is in numerous tests in motoring magazines, various eco rallies, and record-breaking attempts to drive with the lowest possible fuel consumption. In practice, though, there are usually factors that mean that the car’s consumption increases compared to the declared value and the range logically decreases. 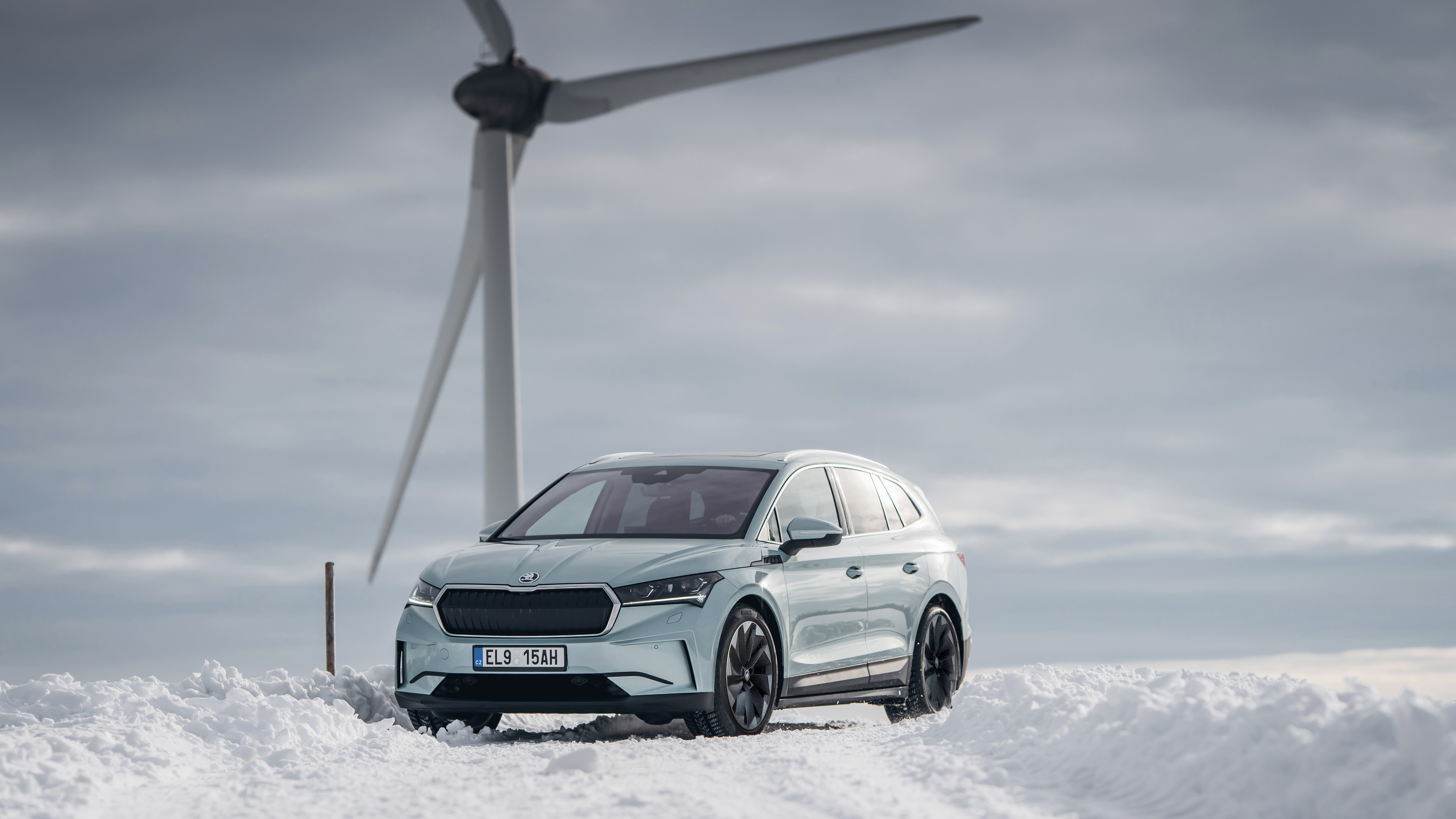 In wintery conditions, the temperature has a greater effect on the battery’s performance.

Temperature outside and in is a factor

One general rule is that electric cars’ range and consumption are more affected by temperature than cars with an internal combustion engine. The outside temperature affects both the efficiency of the traction battery itself and, of course, the need to heat or cool the interior. And that cooling or heating, by the way, is not accounted for in the test cycle. “For the traction battery itself, the ideal working temperature (inside the cell modules) is between about 10 and 35°C. At higher temperatures, battery cooling will already be activated by a high-voltage air conditioner, which consumes electricity. At lower temperatures, due to the nature of the chemical processes in the Li-ion cells that happen more slowly, the battery’s charging and discharging capacity is gradually reduced, which in turn reduces recuperation efficiency, for example. At sub-zero temperatures, the battery there needs to be actively heated again (using high-voltage water heating),” explains David Pekárek from ŠKODA’s High Voltage Energy Systems department. 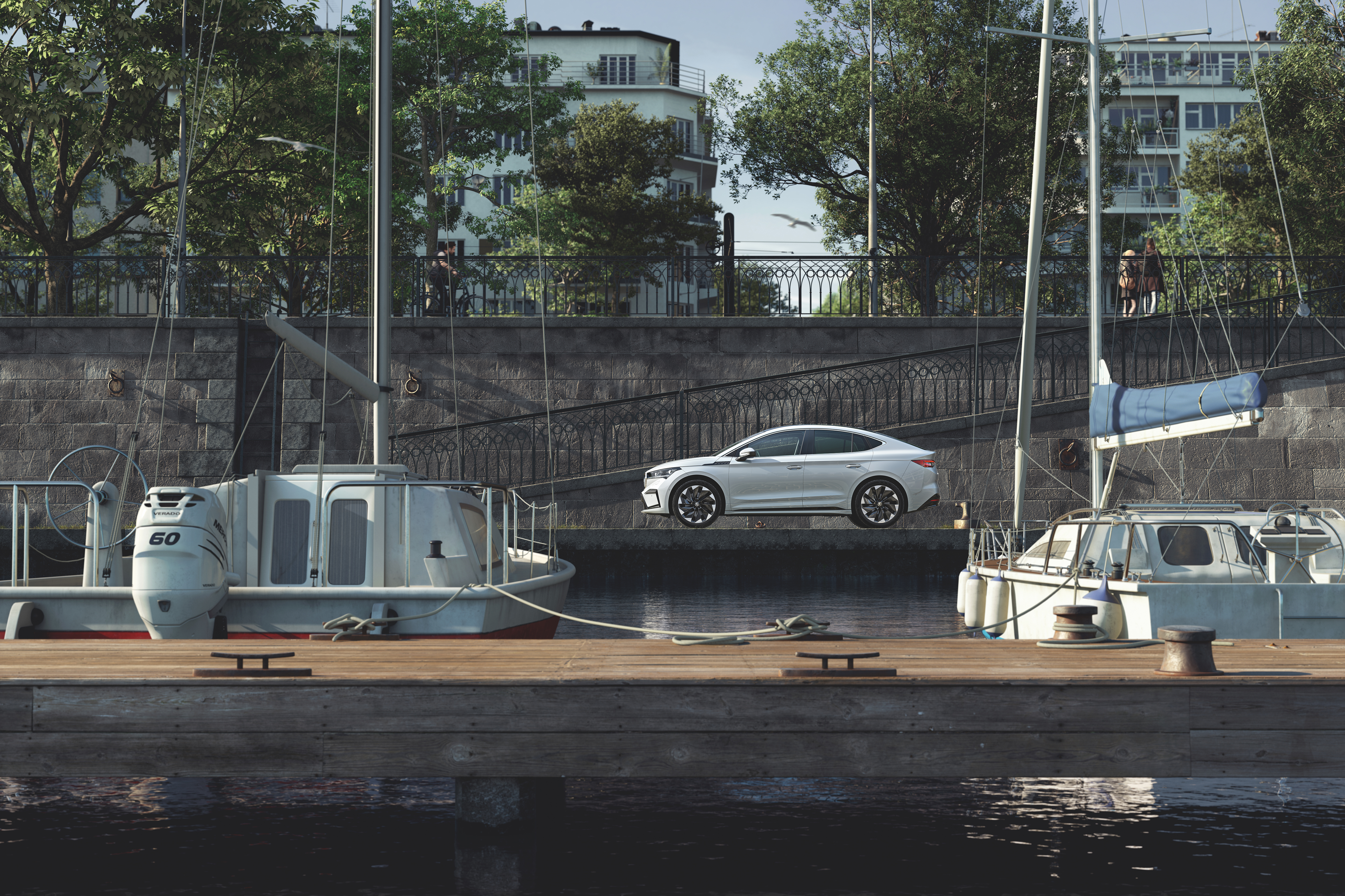 Electric cars’ range is influenced by several factors, among then the drivers and their driving style.

And then factors such as air conditioning and heating come into play. “Sunny spring or autumn weather is ideal for an electric car, when the sun has just enough energy to warm the interior to a comfortable temperature without the need for heating or air conditioning, and the traction battery will not require active heating or cooling,” Pekárek and Beneš add. Of course, the battery is also affected by the driving style: hard-braking, hard-acceleration driving can heat up the battery so much that it will need to be cooled even in otherwise cold weather. So the driver himself can affect consumption considerably – in addition to intensive acceleration and deceleration, high driving speeds also have a negative effect. 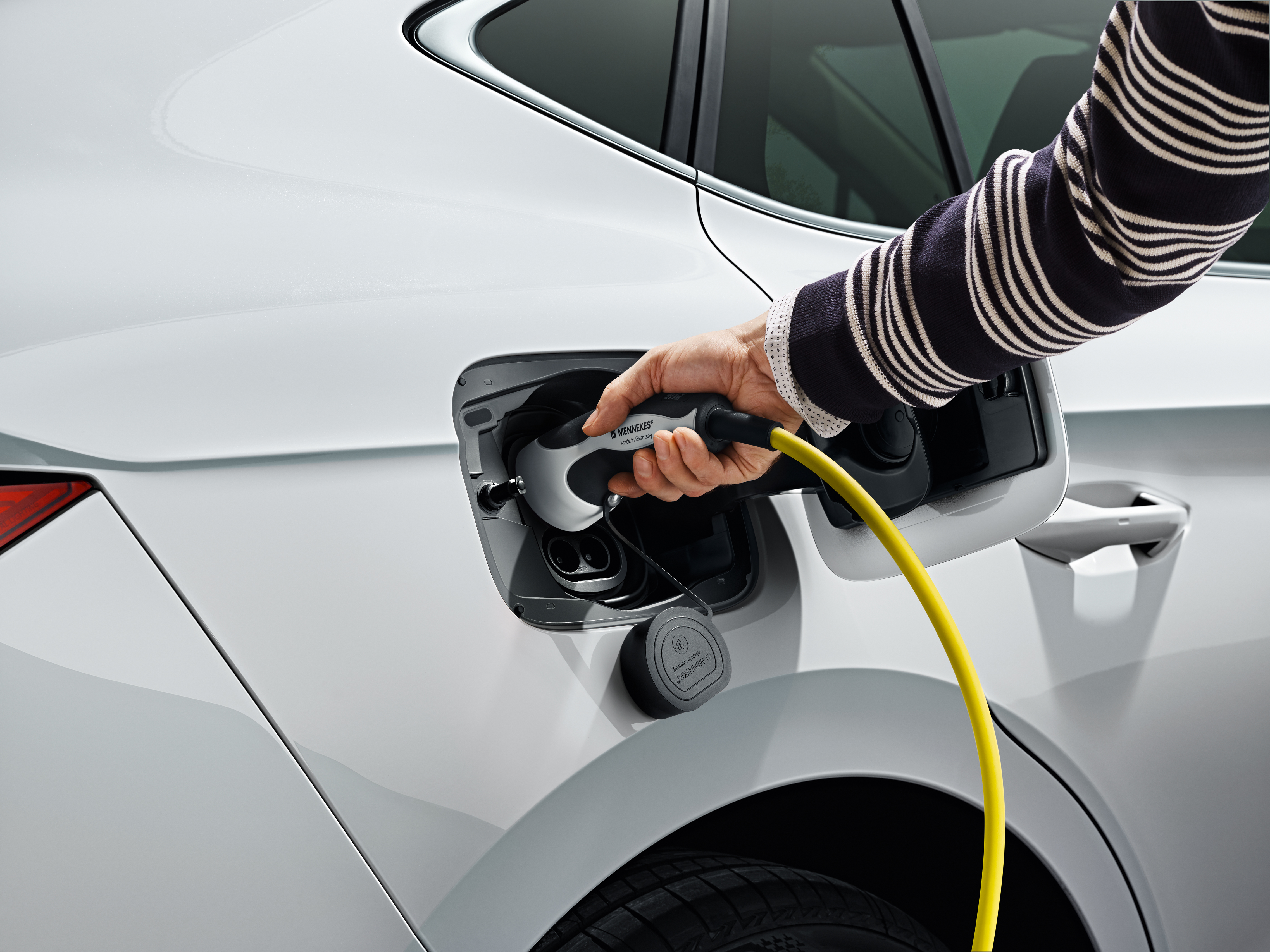 The recommendation is to charge all-electric cars’ batteries to 80% in normal circumstances.

You can find out roughly how different factors affect an electric car’s range by using ŠKODA’s smart range calculator. Simply choose your car (currently you can find the different versions of the ENYAQ iV, including the ENYAQ COUPÉ iV) and enter the following conditions: season, environment in which the car is mainly driven (city, out of town, motorway), driving style (eco-friendly, normal, sporty) and the number of people in the car. You can also enter the desired temperature in the car’s interior.

What’s more, the ever-improving charging infrastructure and the sufficient range of electric cars mean that driving across Europe is now almost as convenient as travelling in a car with an internal combustion engine. Proof of this can be found in ŠKODA Storyboard’s My ENYAQ iV series, for example, in which the proud owners of this ŠKODA electric car share their experiences. German couple Martin and Evita drove their electric car for around 3,000 kilometres during their holiday in France and Switzerland, and Martin says: “Driving 300 kilometres in one go on the motorway is no problem, even if you’re going quite fast.” Swiss owner Christian agrees: “I drive the way I like to drive. The range is ideal for us, I think it’s fine to take a 20-minute or 30-minute break every 300 or 350 kilometres on longer journeys,” says the owner of an ENYAQ iV his family have named Jarvis. 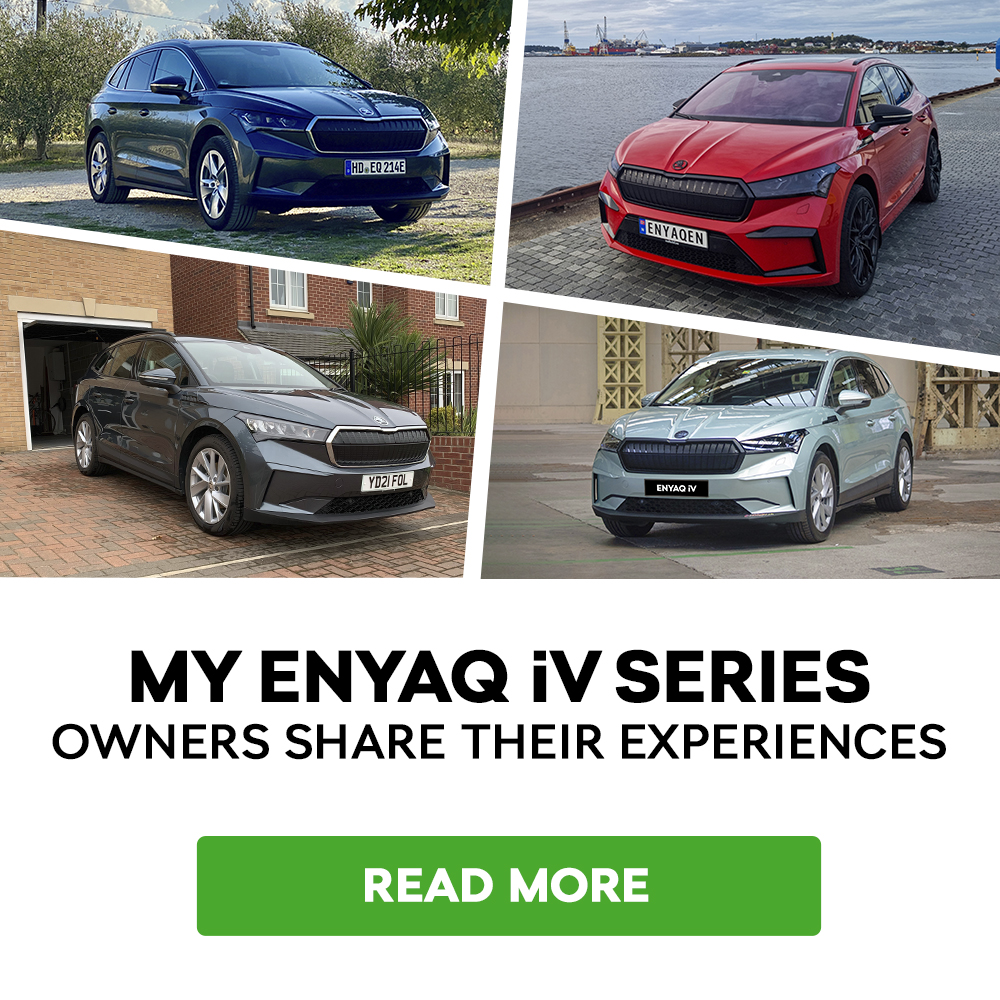 So EV range doesn’t have to be a major limitation, even if the values measured on the WLTP cycle may not be easy for everyone to achieve in practice.

RDE stands for Real Driving Emission, a procedure that measures the actual emissions of a car in traffic. So RDE testing doesn’t take place in a laboratory: the car is driven in real traffic. The car is fitted with special equipment to measure emissions and the actual driving does not have strict rules like in a laboratory cycle. The driving time should be between 90 and 120 minutes, the route should be evenly split between different types of road (city, country roads, motorway), with a motorway speed of no more than 145 km/h. For the air temperature, a range of 0–30°C is allowed, the car’s air conditioning is switched on during the test, and the maximum altitude during the test is 700 metres with a total elevation on the route not exceeding 100 metres. The consumption or emissions monitored during these practical tests must not exceed 1.5 times the values reported in the laboratory. The principal purpose of RDE tests, however, is to detect emissions of pollutants (nitrogen oxides, soot etc.).

HOW IS AN ELECTRIC CAR’S RANGE MEASURED? 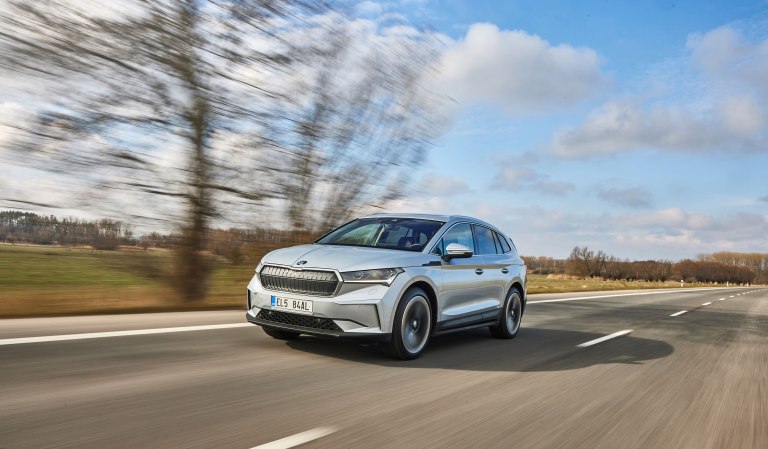 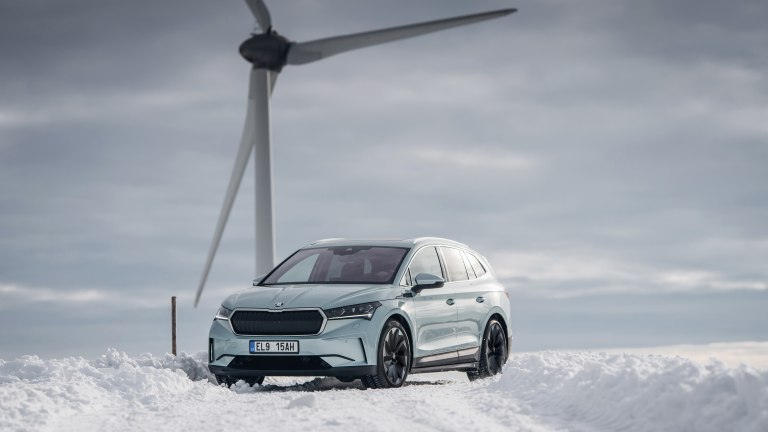 In wintery conditions, the temperature has a greater effect on the battery’s performance. 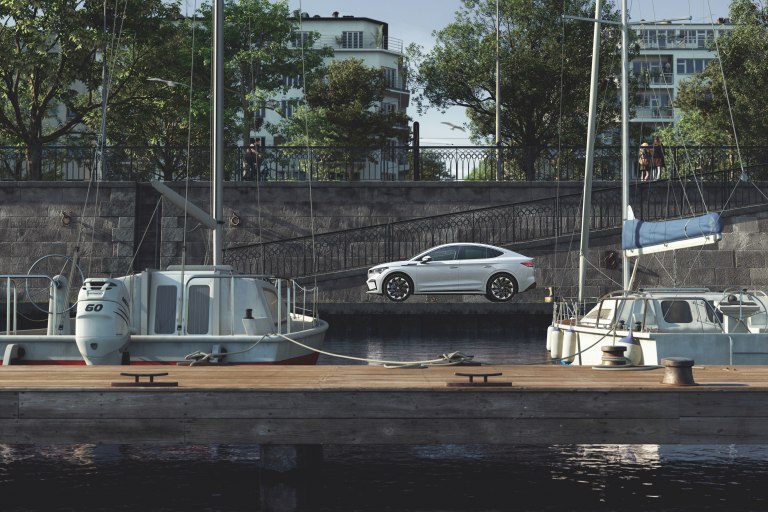 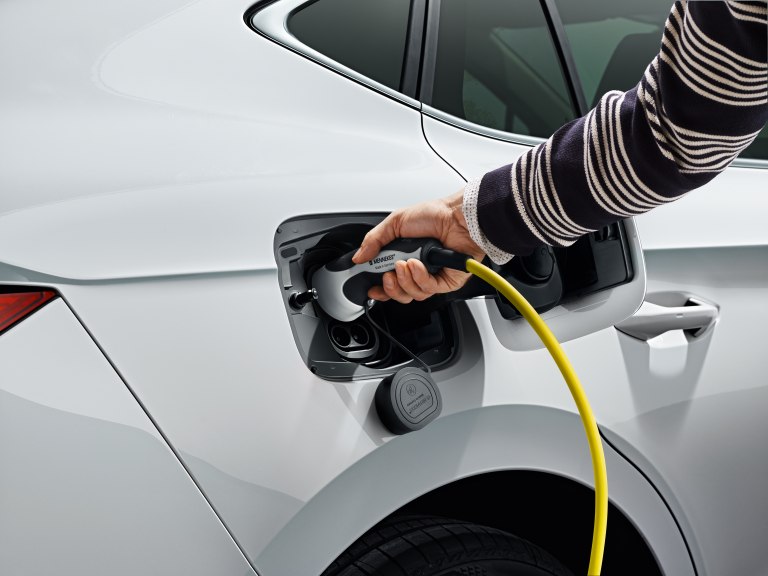 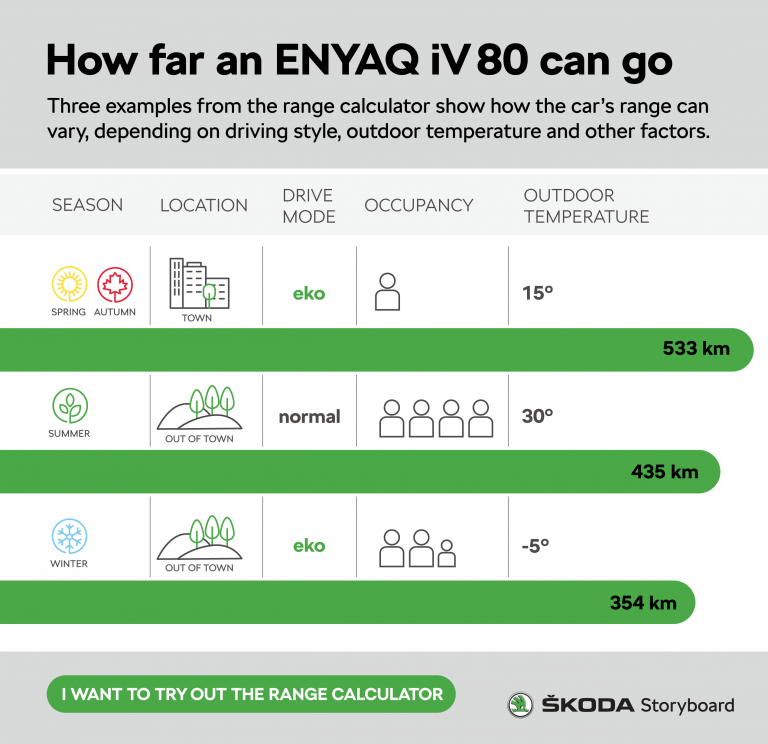