Members of the Design Management team translate the language of figures into the language of design. Dealing with both finances and project management, they are responsible for ensuring that a new car gets beyond the development phase. And for the presentation of cars that are at various stages of development.

Project management is a pretty diverse job. Deadlines, budgets, meetings, unexpected problems – the managers never have time to relax. What’s more, in a carmaker’s design department there is the additional role of the manager as a kind of translator – not from one tongue to another, but from the cold prose of numbers to the creative poetry of designers. 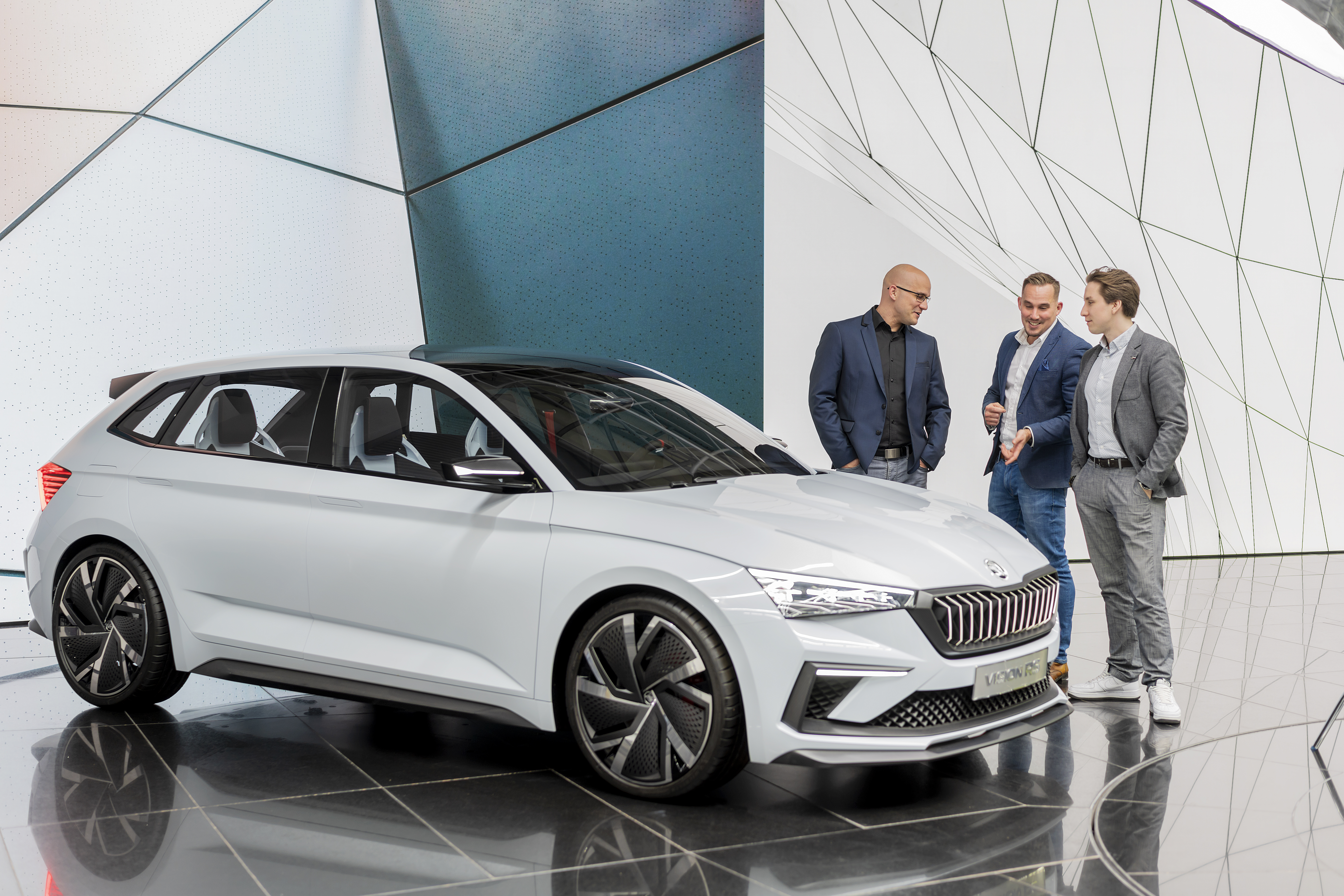 “Essentially, we give designers and model-makers the freedom to concentrate on their creativity. We take care of project management, technical requirements and financing – we’re a link between design and ŠKODA’s other departments. We help draw up project timetables and we’re part of the design strategy preparation process, so we have an impact on the company’s design language in the future,” says Petr Basler, who runs the Design Management department at ŠKODA. “We have to ensure that the company’s design work doesn’t get stuck in a rut. Together with our colleagues, we choose which of our cars’ traditional design features are retained, and which features we innovate,” Basler explains.

In addition to these visions that shape new cars over the long term, the team’s bread and butter is the day-to-day management of projects, i.e. designing cars in development. It starts with the brief for a particular car: for example, how will the new model differ from its predecessor (if one exists). In this example, a “proportions” model is created to determine the car’s basic dimensions, including the size of its wheels or the placement of its windows, for instance. 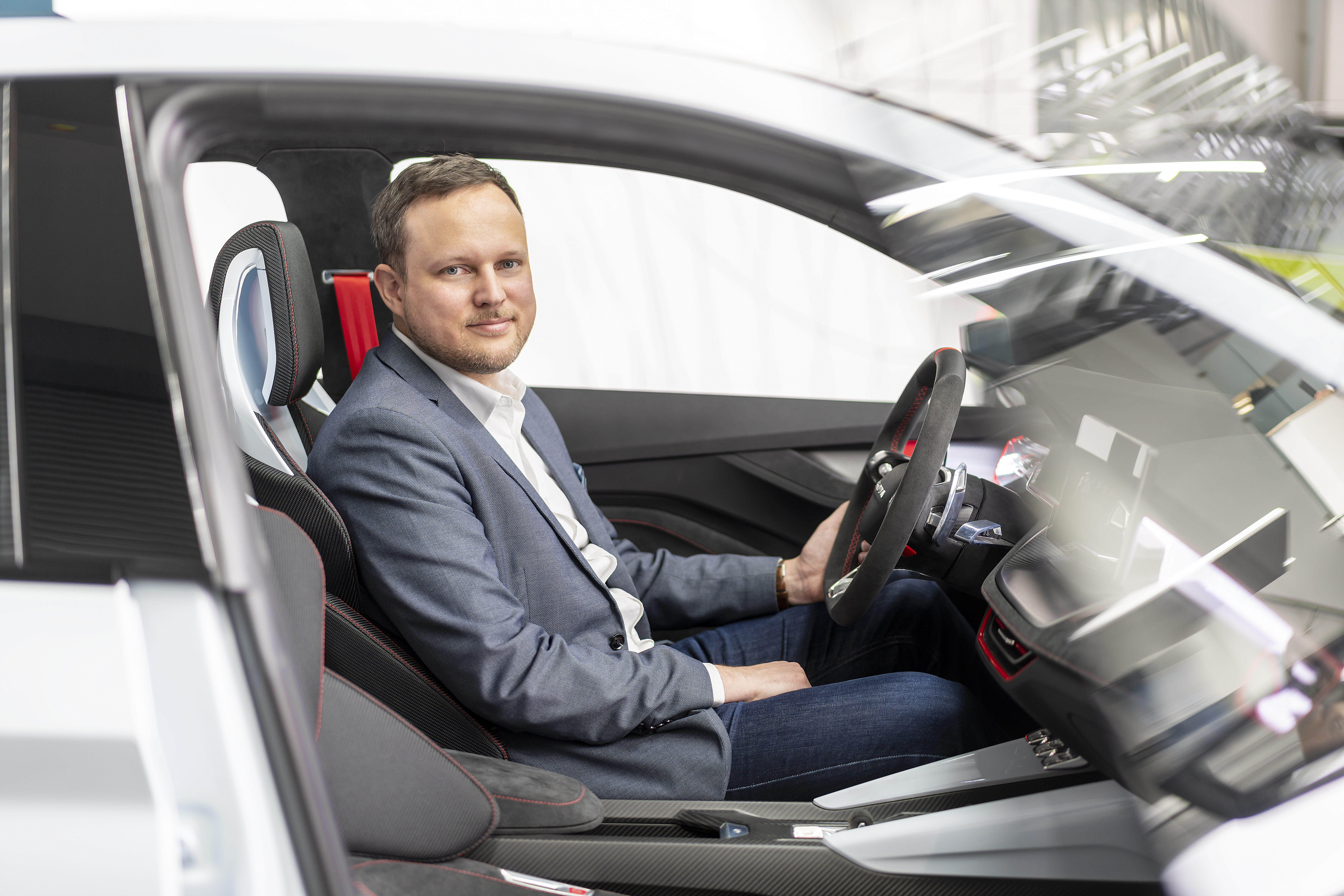 “This is an unfinished design that may have the same lines as its predecessor but its dimensions and proportions are new. Based on this, the designers start to work on their vision,” Basler says. He adds, “The managers’ job is to ensure that in the car development process as a whole we develop its design in accordance with a wide variety of requirements or, conversely, modify the requirements in a way that benefits the car’s design.”

One thing the project managers keep an eye on is whether the car’s design doesn’t only conform to the brand’s design language but satisfies technical requirements, such as protection for pedestrians, the view out of the car and aerodynamics, or simply whether the design can realistically be produced. The team managers also set limits in terms of costs. Every project has its budget covering all the design preparation costs, both in-house and external. This covers personnel costs, say, but also things like the cost of producing prototypes, from the price of modelling clay to the cost of operating milling machines. 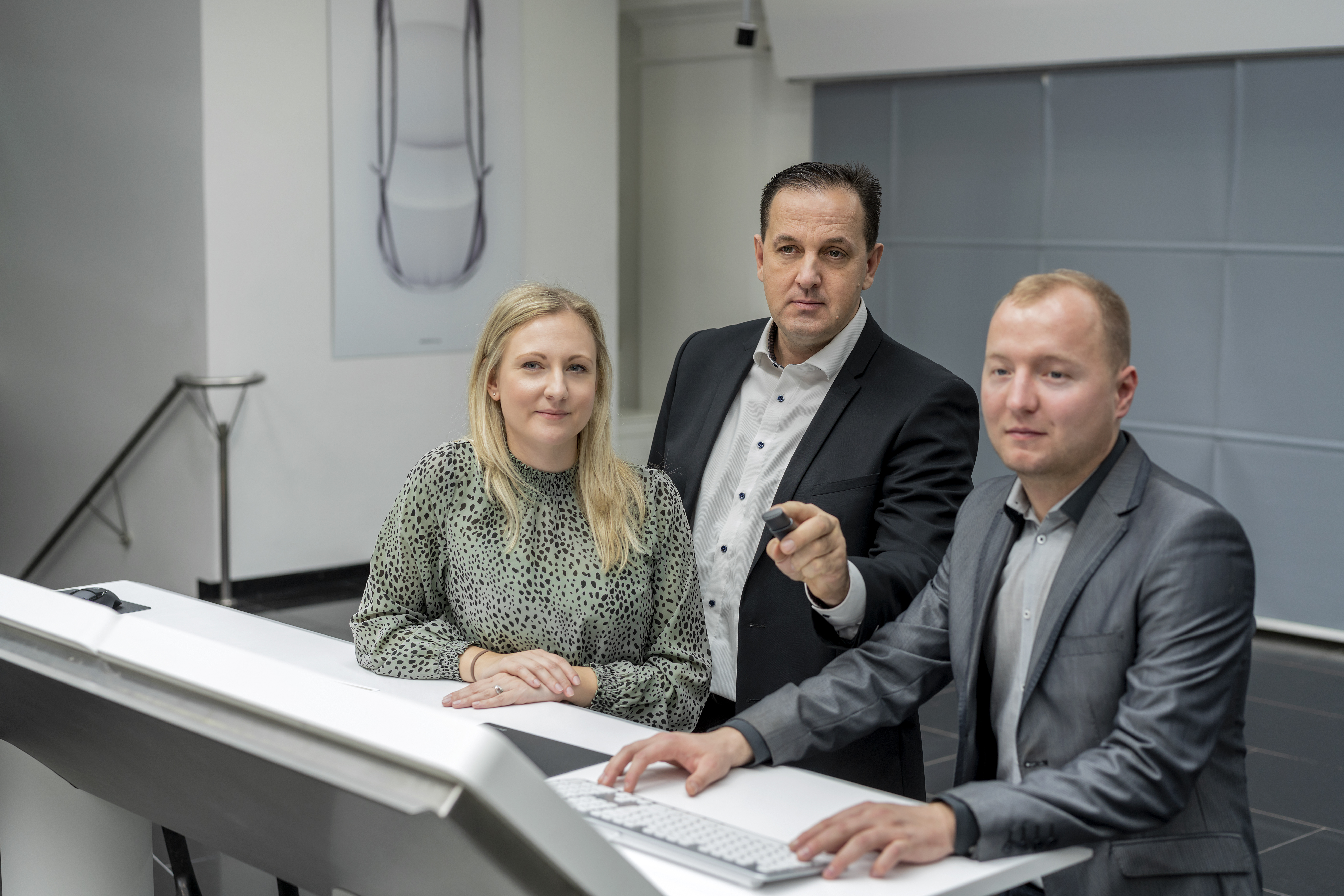 Project preparation often necessitates cooperation across Volkswagen Group, not just within ŠKODA. “There is increased demand for sharing platforms and other parts of projects as well. So we look for ways to find the greatest possible synergies, while also ensuring that the brands remain as distinctive as possible,” Basler says. This usually occurs with components and parts that are hidden from customers’ eyes. Surprisingly, though, one shared part is windscreens, which may be the same for several models right across Volkswagen Group. “There was intensive Group cooperation on the ENYAQ iV, for example,” explains Daniel Edr, the second longest serving member of the design management team. 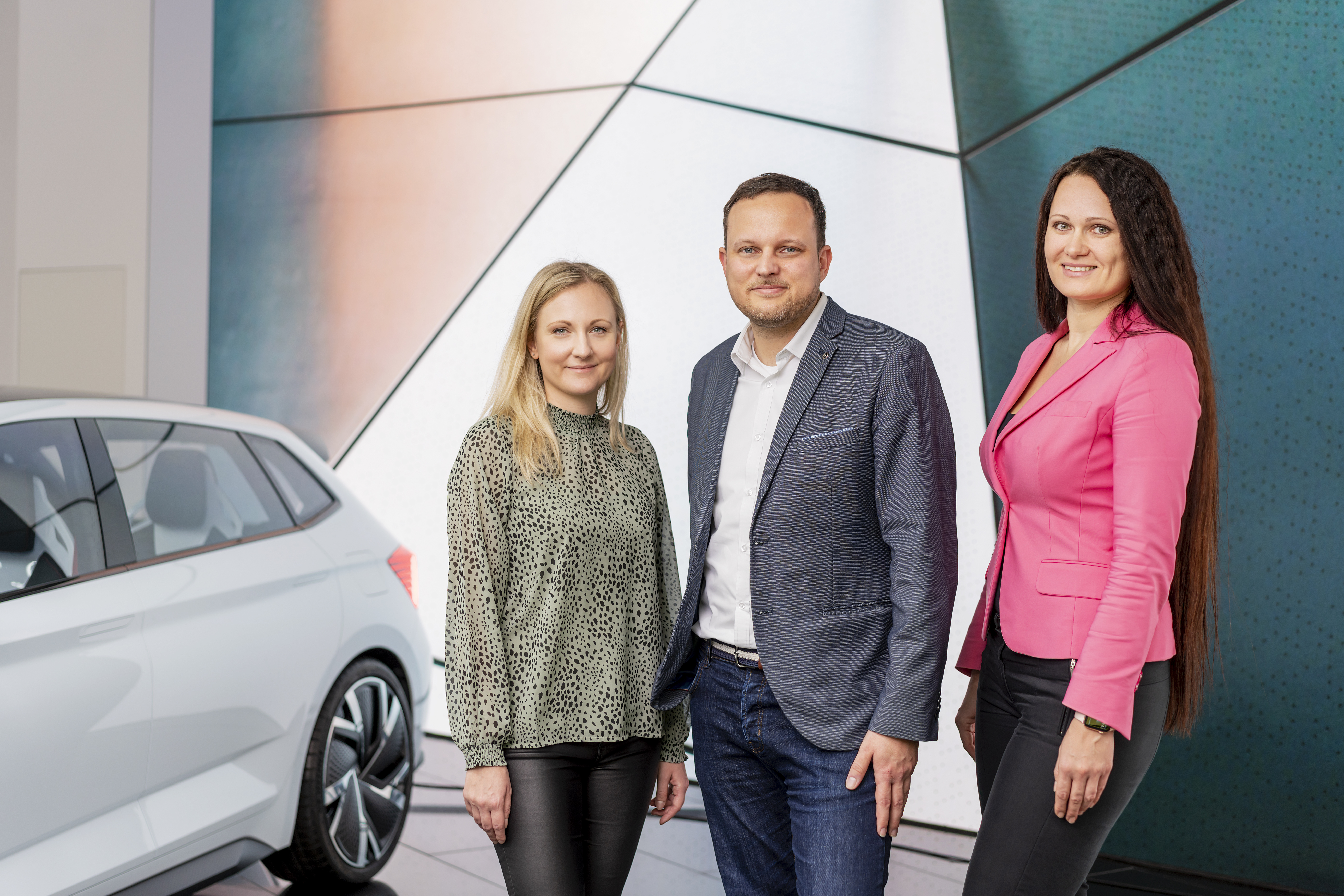 What made this project more challenging was that it was ŠKODA’s first electric car. “We had to change our thinking in terms of how the customer was going to use the car, how he would drive it, how we could make everything as user-friendly as possible,” says Edr. The preparation of some ENYAQ iV derivatives, e.g. the sports versions, was also brought specific challenges. “With traditional cars you already have certain tried-and-tested techniques for achieving sporty looks, including the appearance of their exhaust pipes, but electric cars don’t have any. So we placed a lot of importance on the cars’ aerodynamics right from the start,” he explains.

The cherry on the cake

In addition to new models, one specific task is working on concept cars for international exhibitions and trade fairs, which are known as “show cars”. “This is the cherry on the cake we all enjoy, but it’s also much more intense. While we work on a production car for four years, a show car concept has to be completely finished in six to nine months,” explains Petr Basler. His words are confirmed by Martin Porteš, who worked on the ŠKODA VISION RS concept, for example. “Working on a concept is exciting but demanding. In a way, the practical boundaries of the worlds of technology and finance are set aside in this case, and we can try something new that we wouldn’t normally do. But it all happens very quickly,” says Porteš. 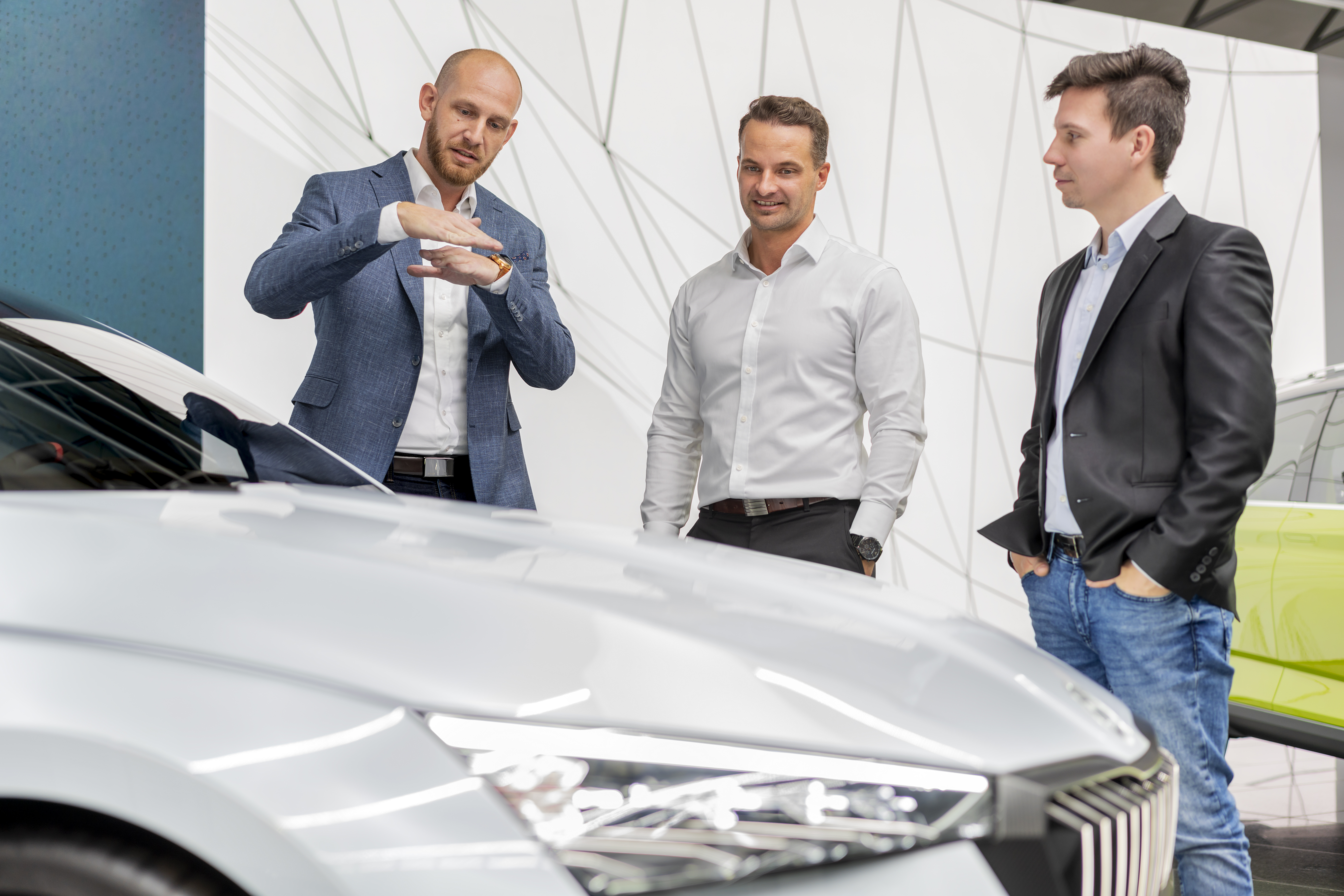 Normally, preparing the final appearance of a car takes longer than work on concepts, but the intensity is not all that different. “It’s more that we have something of a fixed routine with production cars. We’re used to a huge amount of changes in the early stages where designers can let their creativity run wild – it’s only when the technical specifications of many details start to be finalised that the fine-tuning comes in,” Porteš explains. Sometimes it’s a seemingly endless loop of adjustments, but sometimes it all proceeds more quickly. “Recently, for example, we managed this on a project for India, where there was an unexpected congruence between technology and design from the start. We defined and selected the design quite quickly, the technical and emotive aspects went without a hitch and everyone had a lot of fun working on the project,” Porteš says.

Seeing the final car at its presentation is a big moment for any design manager. Whether it’s a production car or a concept car, where the satisfaction is all the greater because the stress of several months of intense work has suddenly disappeared. “There is no better feeling than seeing a concept completed for the first time in our hall. And then seeing it arrive on stage at the world premiere...” smiles Martin Porteš. Before this can happen, though, the car has to go through a series of approval processes. 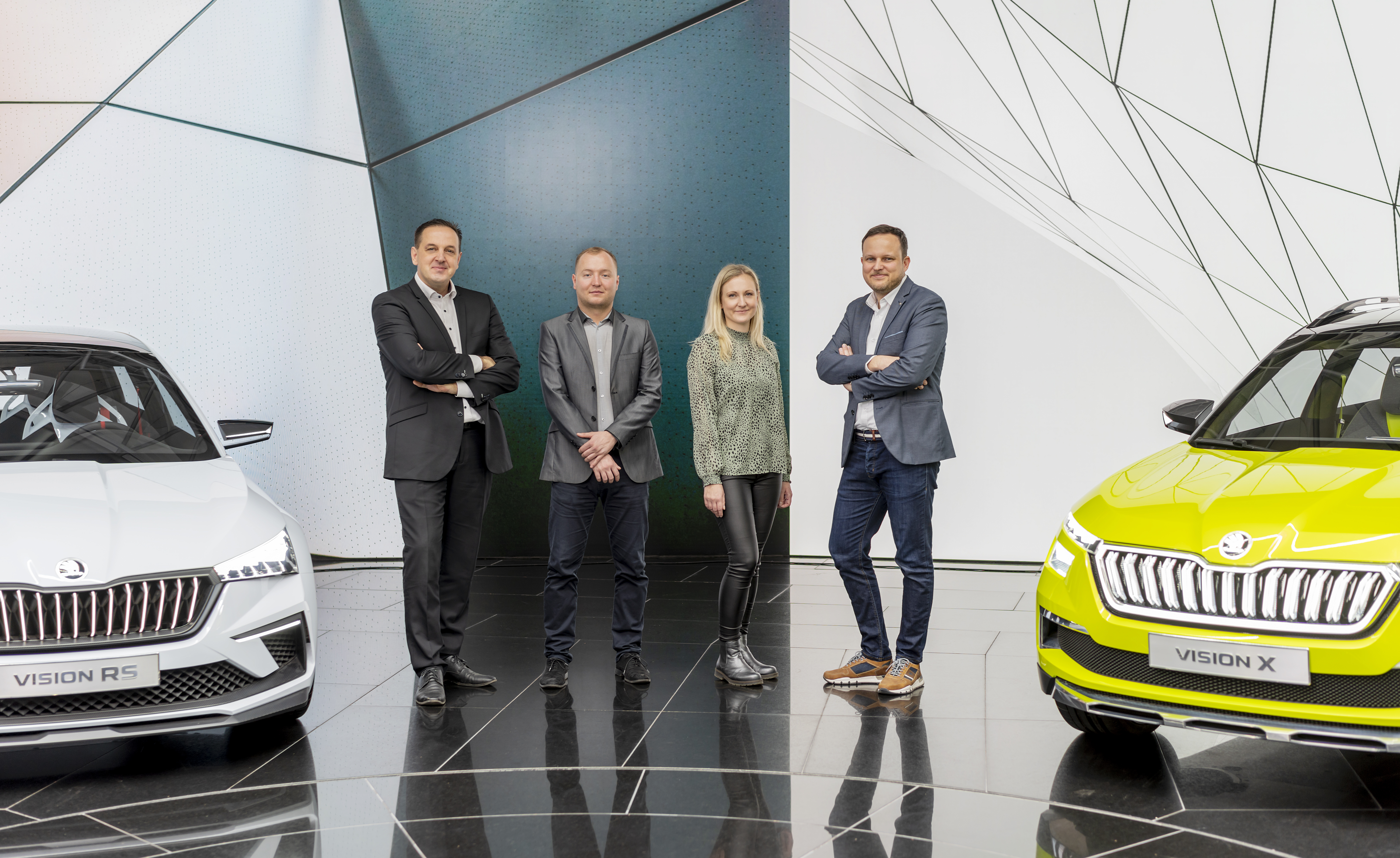 That makes it necessary to prepare presentations of the cars, whether for the ŠKODA management or the Group’s board of directors. Graphic designer Petr Petzet is a specialist in the design management team. His job is not only to prepare the presentation files, but also to prepare the car. For example, Petr Petzet was responsible for preparing the cars for the photo shoot staged for this article. “The form in which we present the car is becoming more and more important. The presentation must be up-to-date in terms of both style and content, and the car has to be shown in such a way that inspires interest and excitement among the board members, for example,” explains Petzet.

That’s why the most important presentations continue to use physical car models. “Giant projection walls, virtual reality and other modern technology help us a lot and allow us to generate a great atmosphere, but the physical model always has the biggest impact,” Petzet emphasises. This is because cars have very complex shapes, which the human eye and brain absorb a little differently in a virtual environment and in the real world.

The 4 members of the Design Management team: 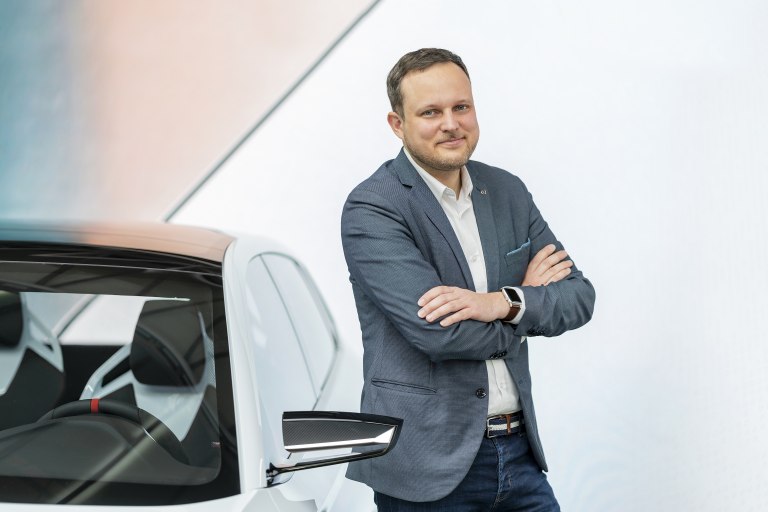 Petr Basler comes from a Czech-German family and says that his international background helps him a lot in his work. “I have known the mentality of both nations since I was a child, and this helps me communicate not only within the company, but also within the group,” says Basler. He has worked in the ŠKODA design department for over 16 years, having started there shortly after graduating from the Czech Technical University, where he studied Transport and Handling Technology. “Working for ŠKODA is a love affair. And that is doubly true for working in design,” he says. From his original position as an engineer and technician, he gradually worked his way up to head of the design management department, a role he helped define alongside chief designer Oliver Stefani. Among other things, a year’s work experience in Wolfsburg helped him in this. “The contacts I made there are still invaluable today,” he adds. 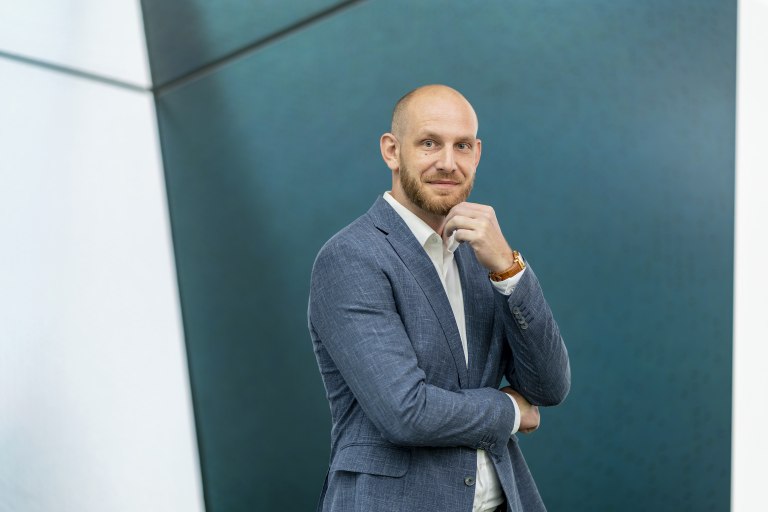 He has been working in the Design Management team since 2017. A mechatronics graduate, he specialised in the field of electric vehicles and originally joined ŠKODA specifically to develop electric traction. He spent a total of three years working abroad, where he gained further experience in electromobility and project management, and he decided to put this to good use upon his return to the Czech carmaker. He eventually moved from the technical department to the design department. Here he was involved in the VISION RS study, for example, and he is currently working on the successor to the current ŠKODA SUPERB. 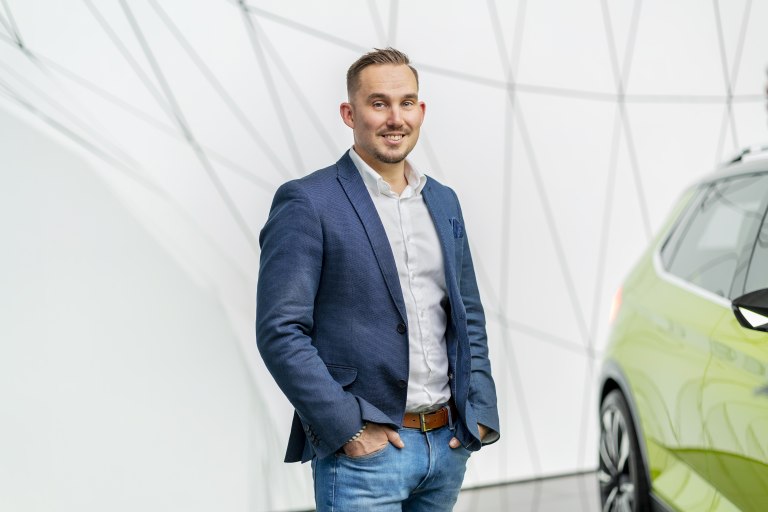 It was Daniel Edr’s father, a mechanical engineer, who instilled a love for cars in him. And when Petr Basler, a classmate from the Czech Technical University, lured him to ŠKODA, he didn’t have to think twice. “A position came up, I applied, and they hired me. I left my previous job and have now been working here for over fifteen years,” he says with a smile, adding in the same breath that working in the design team is anything but monotonous. The proof is the projects he has worked on: these include the CITIGO, the SUPERB, modernisation of the YETI, the OCTAVIA and the ENYAQ iV electric car, to name but a few. 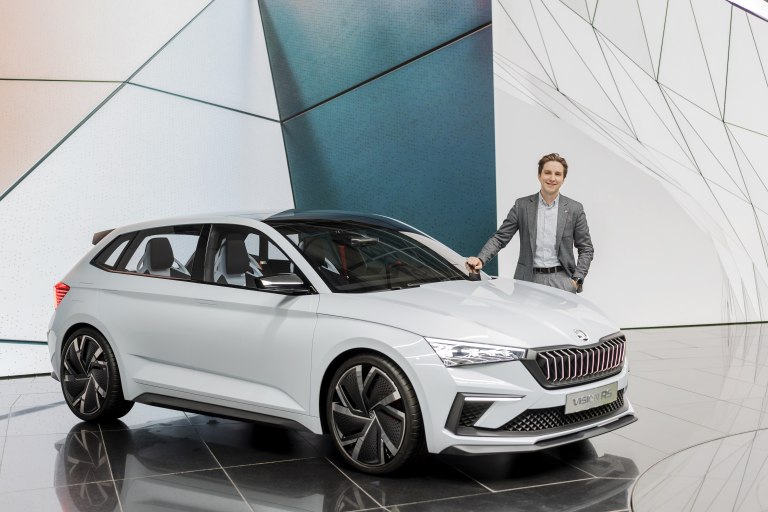 Petr Petzet first drew cars when he was a little boy, and his love for cars eventually led him to study mechanical engineering at the University of Liberec. But even before studying at the technical college, he started to turn his hand to graphic design, a field he has now more than twelve years’ experience in. And he has been combining his technical and creative talents in the design management team for three years now. “Whatever has a graphic aspect in our department ends up on my desk,” he smiles, adding, “As a small-town boy, I now prepare presentations for the top bosses of ŠKODA and the entire group, and I really enjoy that.” In addition to that work, he also deals with project management like his colleagues.

Next up in THE HIDDEN FIGURES OF DESIGN series

Hidden figures of design: help you get along with your car

HIDDEN FIGURES OF DESIGN: LINCHPINS OF THE CAR DEVELOPMENT 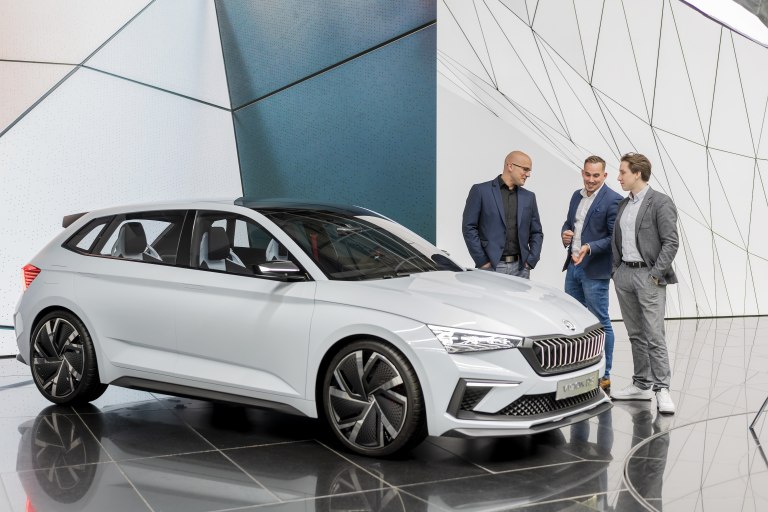 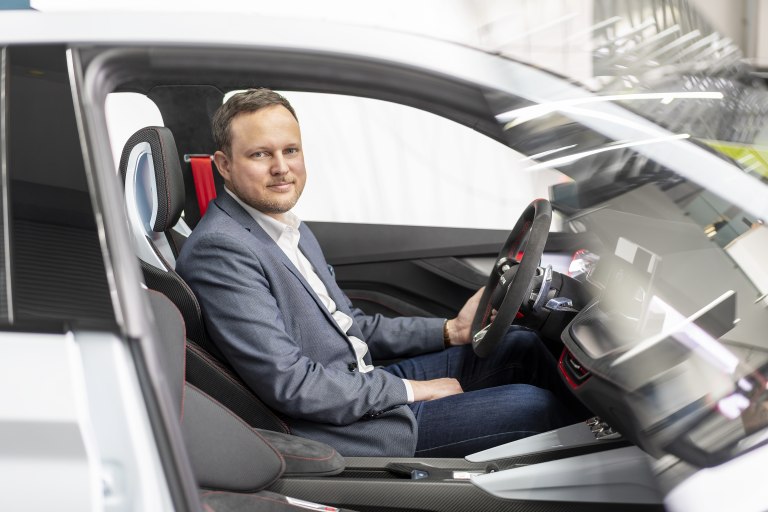 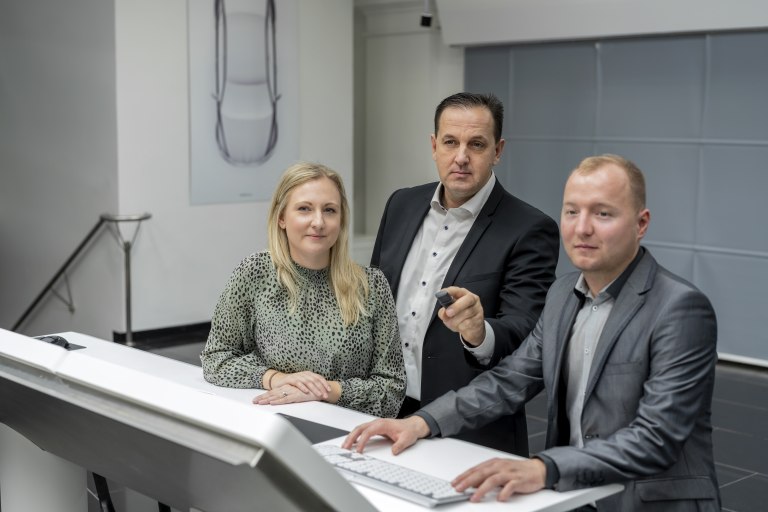 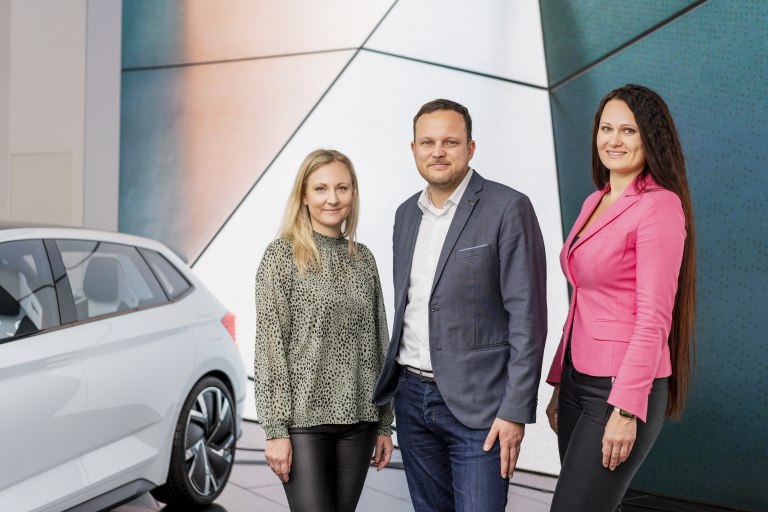 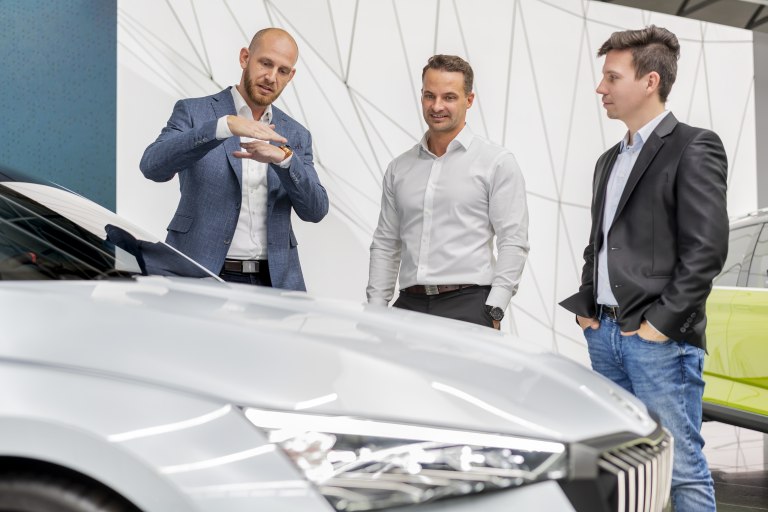 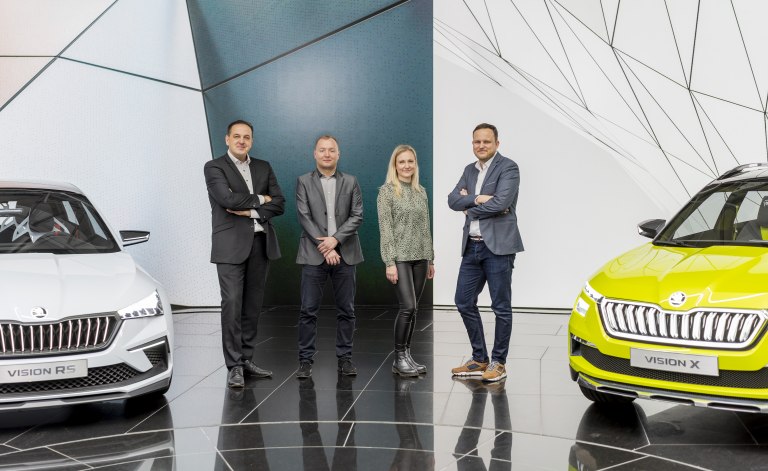 The ŠKODA SLAVIA through the eyes of its chief designer