Out of Komerční banka’s fleet of 500 cars, more than 130 now display the ENYAQ iV name on the fifth door. As part of its drive to attain carbon neutrality, the Czech bank is committed to switching entirely to eMobility.

More than 130 company cars are “pool cars”, which means that employees borrow them as needed. The rest are assigned to individual managers or salespeople as permanent company cars.

The bank decided to gradually convert its fleet to electric five years ago, when CEO Jan Juchelka took over the reins. “He led by example and started driving an electric car. He did a lot to overcome the prejudices and myths that abound,” says Tomáš Talaš, manager of the employee services division, which is in charge of the corporate fleet at Komerční banka. 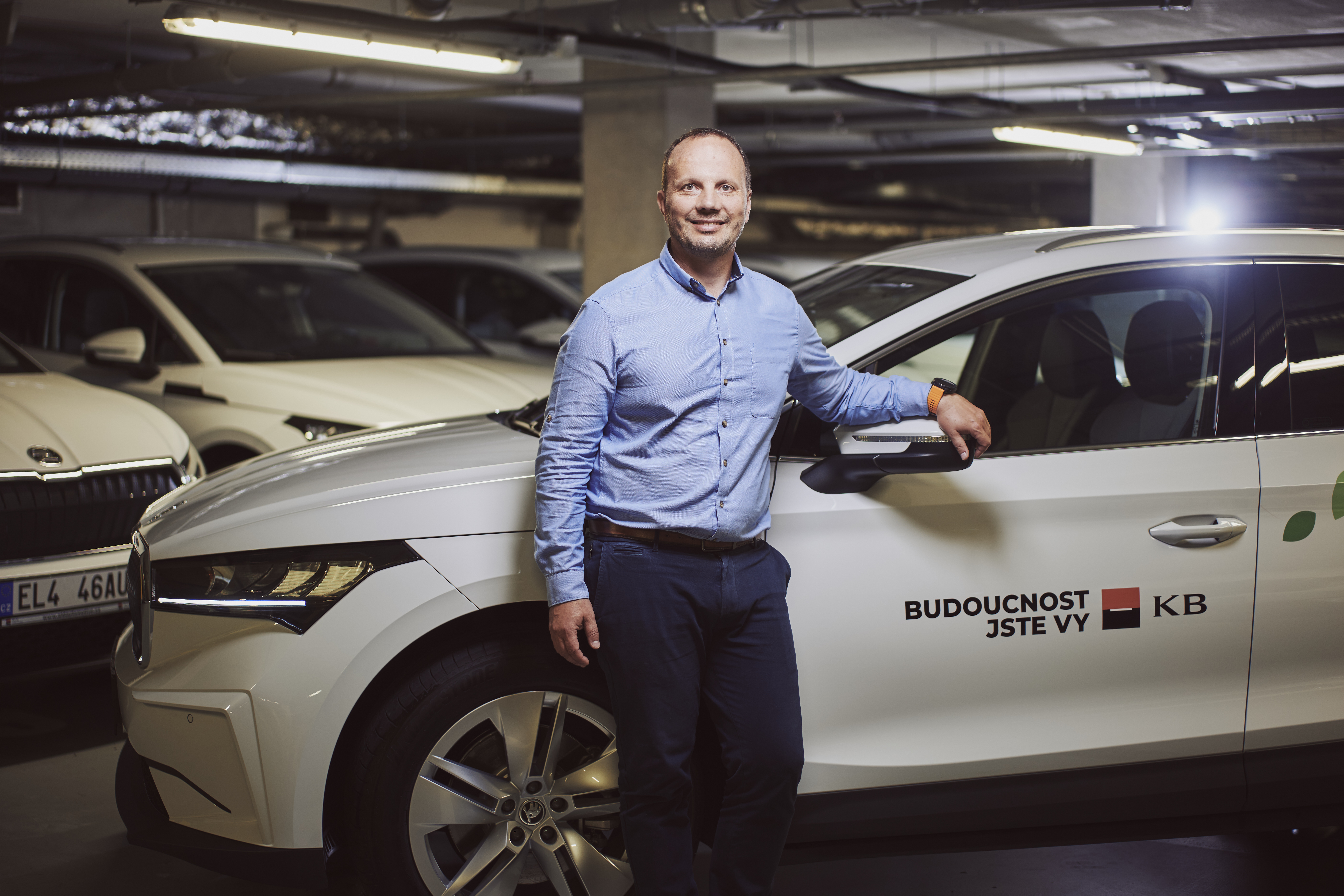 Last year, the bank’s management decided to electrify its pool cars as well. Since October this year, 131 ŠKODA ENYAQ iVs have been part of the fleet. Roughly half of them have been in service for several months already, while the rest have recently been integrated. Only two cars with combustion engine remain in the pool for longer journeys.

“Komerční banka is committed to being a carbon-neutral company by 2026. As a brand we want to be conscientious, and sustainability is an integral part of our strategy. This implies a number of commitments, not only carbon neutrality, but also, for example, that we want to offer sustainable loans, or how we are perceived by investors. At the same time, we want to be seen in this light by our clients and employees – so the switch to an electric fleet makes sense. And ŠKODA makes the same sense to us – it is a big local player and has been an important and natural partner for us for many years,” says Jitka Haubová, member of the board of directors responsible for operations at Komerční banka. 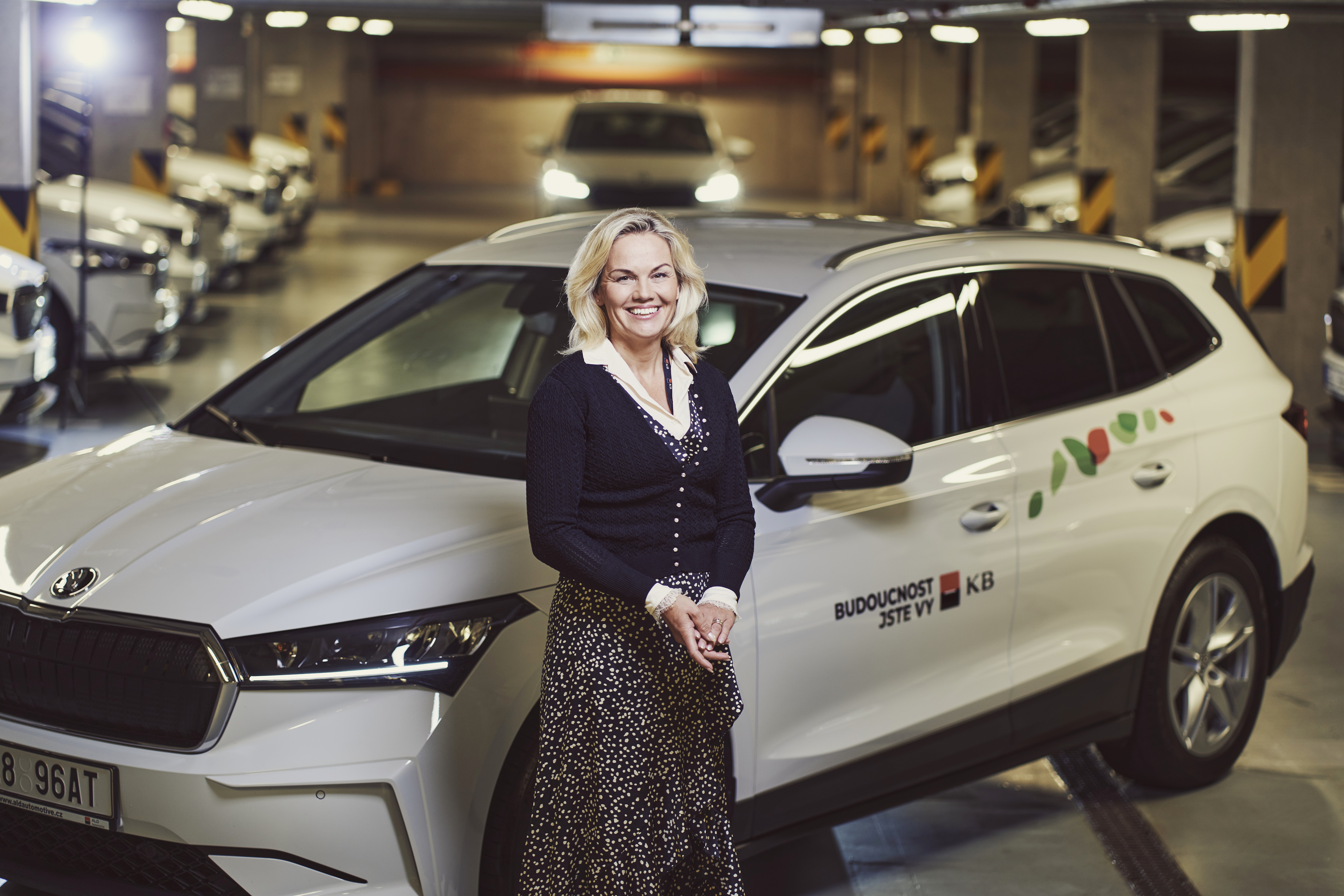 Jitka Haubová, member of the board of directors, senior director and COO of Komerční banka

CEO Jan Juchelka echoes those words. “We want our own behaviour to show we save energy, have a responsible approach to business, are a good corporate citizen and take conscientious care of our employees. Reducing CO2 emissions goes hand in hand with this, and as the bank does not have manufacturing plants with smoking chimneys, we are looking for other areas where we can foster sustainability. The fleet of company cars is one of the pieces of this puzzle. We are used to ŠKODA cars and have been for a long time – so it was only natural that, given the brand’s major move into the world of electric mobility, ŠKODA was one of the carmakers approached for the tender.” 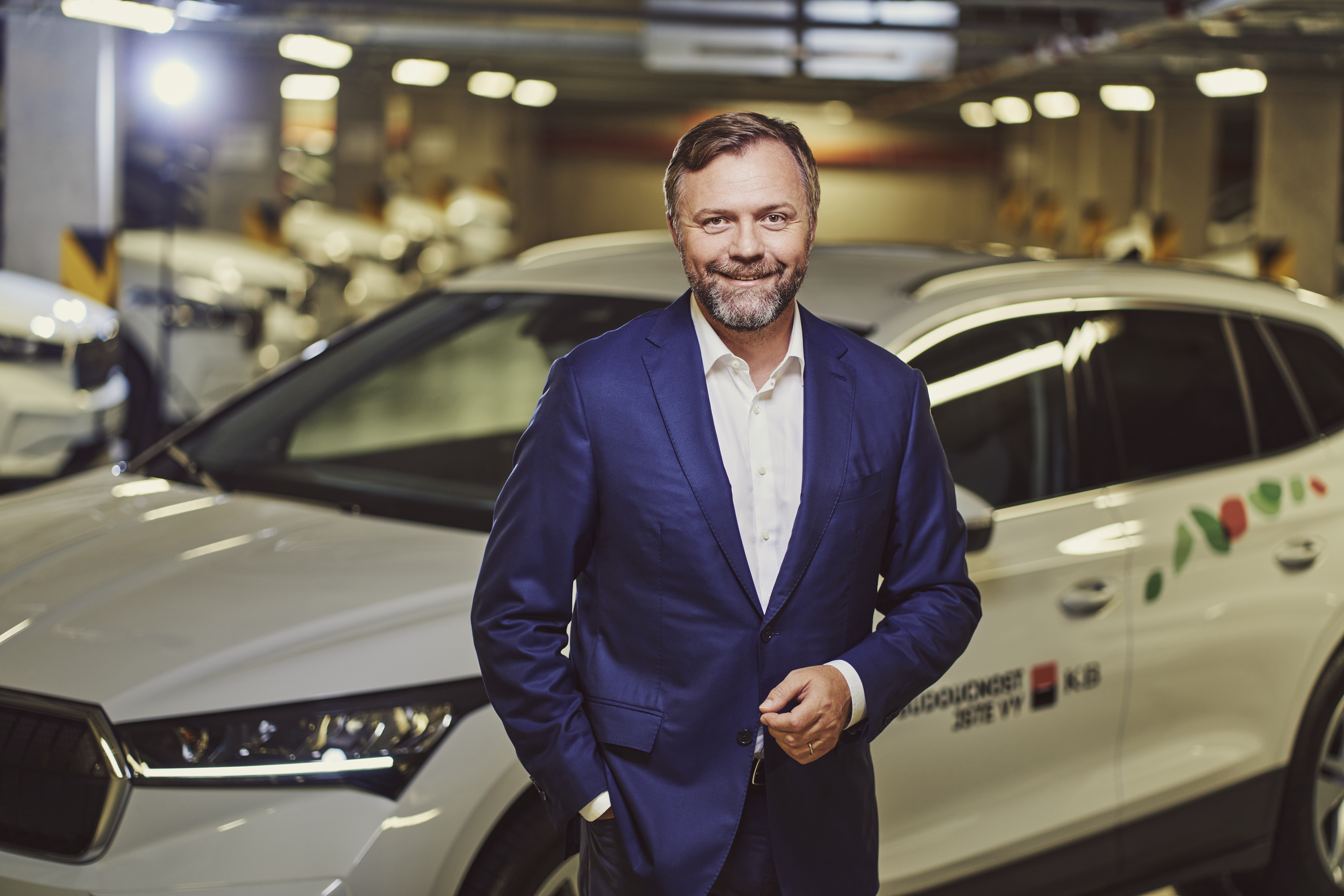 The ŠKODA ENYAQ iV beat seventeen other models in the tender. “What was quite unique was that we had them all delivered at the same time and tested them in normal traffic, in the city, on county roads and on the motorway. A number of cars were discarded after failing to meet the basic requirement of at least managing 250 kilometres of motorway driving. Of course, we were also interested in design or practicality and usability for off-duty driving – our employees can also hire these cars for private use. We actually have an internal rental service, which is very popular among our colleagues,” explains Talaš.

The rest of the company’s fleet, i.e. company cars for managers and salespeople, will also be electrified. The process is going to be gradual, and whenever a car reaches the age of six years, when it would normally be exchanged for a new one, its user will receive an electric offer in the form of the ENYAQ iV. “For anyone who’s hesitant, we may eventually extend the corporate life of the internal combustion car by another four years. But after that the only car they will be offered will be an electric one,” the fleet manager says with a smile, adding that executive cars will have a battery with a capacity of 82 kWh, while the current pool cars are 62 kWh. But even that is plenty sufficient – the company’s in-house research has shown that 98 per cent of company car use is less than 150 kilometres per day.

Tomáš Talaš adds that employees’ reactions to the introduction of eMobility in the company have been altogether positive. “Our CEO’s has been a major contribution: it is motivating people to try out the innovation for themselves. Even though there was a lot of prejudice, we have been quite successful in raising awareness. Fears about the low range are gradually disappearing as people find that the actual range is sufficient for pool cars and for future executive cars. People are renting the cars a lot: we’ve had over a hundred private rentals for weekends and such. Colleagues have even driven to Croatia or Barcelona.” 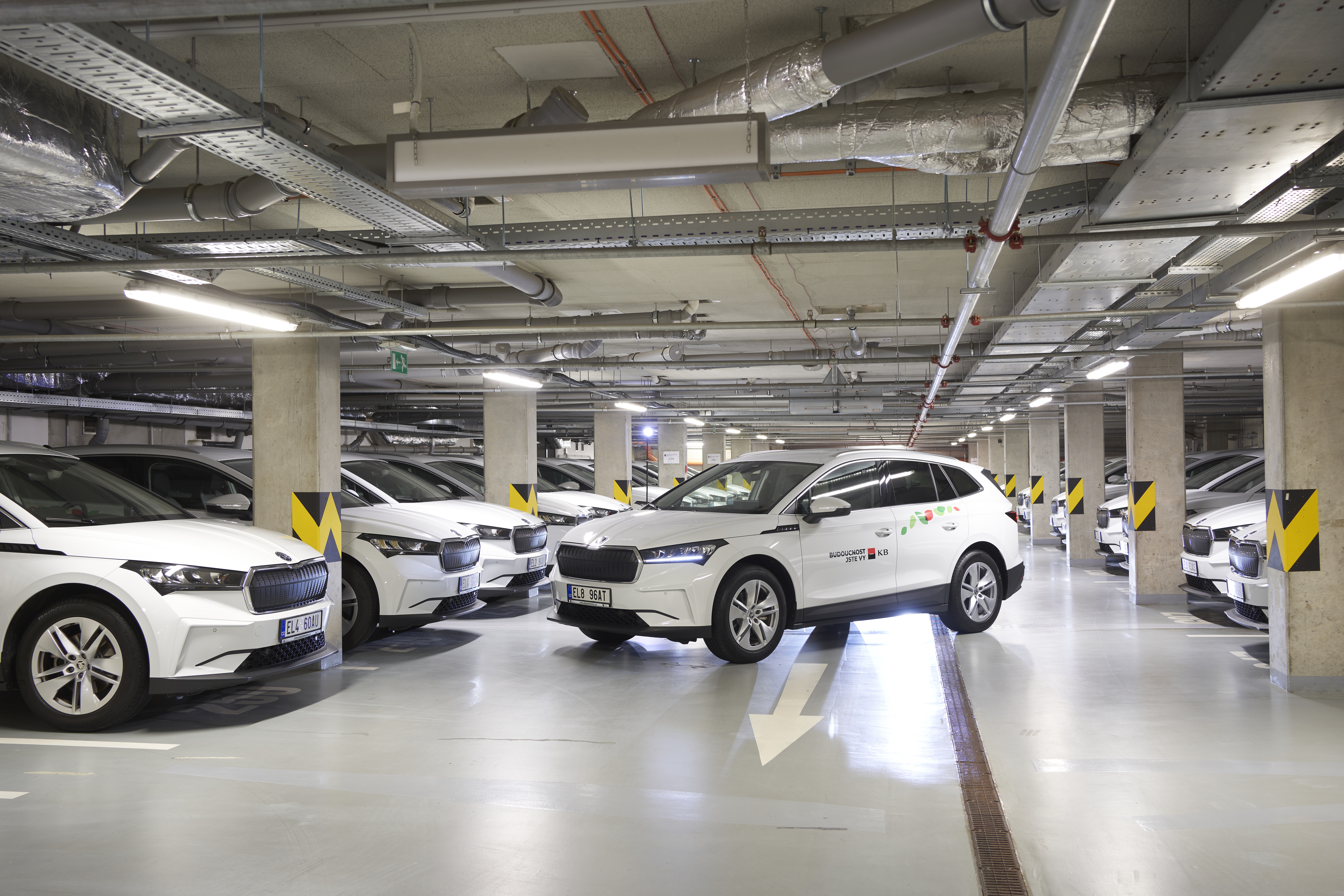 Despite the clear goal of running an all-electric company fleet, Komerční banka realises that this matter must be handled sensitively and gradually, rather than imposing the transition on employees as an immediate obligation. “People need to be given time to get used to it. They need to find out how wonderful it is to drive an electric car, to find out that charging stations are easy to access. There are a lot of preconceptions out there that we as the management need to dispel – if only by offering people the opportunity to use electric cars and showing them how much better and more enjoyable the experience is compared to conventional cars. This is the only way to dispel fears that the car doesn’t have enough range and that people will be stuck on the road with nowhere to recharge,” explains Juchelka.

Komerční banka employees have charging cards for their electric cars that cover the three largest domestic charging providers. Even on longer business trips it’s easy to recharge. The bank has built a network of its own chargers at its headquarters in Prague’s Stodůlky district, in its building in Prague’s Wenceslas Square and at its training centre near Benešov, and more are being added at a brisk pace, especially in the regions. The plan is to have one charging station for each car, and of course more in the capital. Today, there are 180 chargers for the current 130+ cars. In addition, the bank has prepared a scenario for the transition of the executive fleet to all-electric – a suitable number of chargers will be installed at each regional branch, and employees with a company car will be given the option of purchasing a home wallbox at a discount price.

Aleš Řápek, a process analyst for cash operations, has concrete experience of using ENYAQ iV electric cars for several months and says that he makes four to six business trips in a typical month. “I like the comfort even on long journeys and the comprehensive set of assistance and safety features. Acceleration is top-notch – especially after switching back to a car with an internal combustion engine, it’s good to keep this in mind when overtaking, for example. What’s also unusual at first is how quiet the car is.” 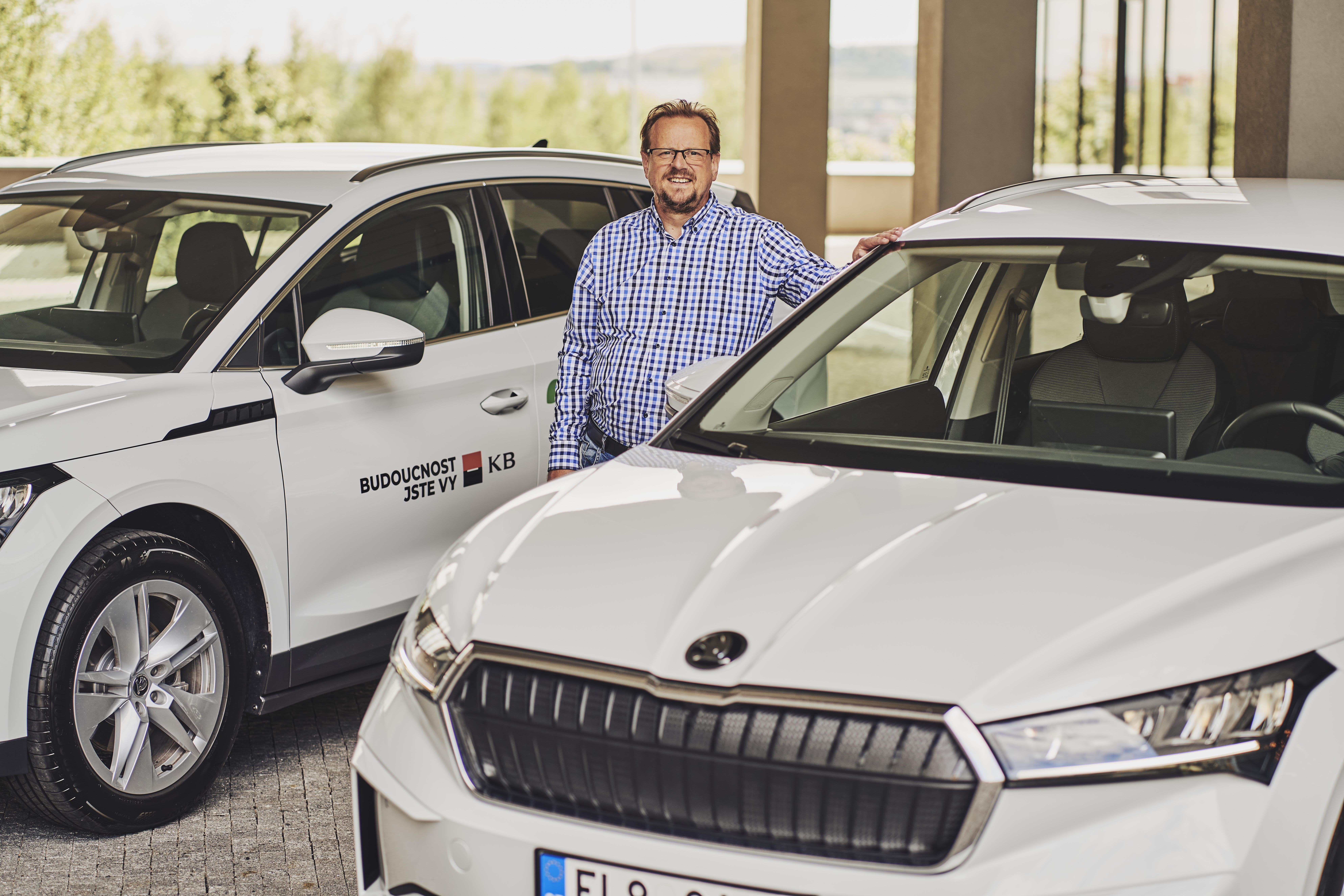 CEO Jan Juchelka drives a ŠKODA ENYAQ iV himself and cannot praise it highly enough. “I wish everyone could experience it first-hand: the experience of the driving dynamics, acceleration and manoeuvrability combined with the fact that it does not pollute the air with fumes. Personally, I find the ENYAQ iV much smarter than the most sophisticated classic cars. And we’re not even using the most expensive version. You can see in the car that the manufacturer gave a lot of thought to making the driving experience different when designing it. The controls are superbly designed, and I can’t stop admiring the minimalist interior. I find it very refreshing,” he enthuses.

Jitka Haubová already has several years of experience with eMobility – according to her, it is a modern and green trend that is ideal for driving in the city, to work, and for fun. “We can conveniently charge at work and we have our own photovoltaic system at home, so I can replenish the energy at no cost. Another nice thing is that an electric car can also be parked in any residential zone in Prague, for example. I appreciate the nimble handling, the amazing acceleration and now also the decreasing time needed for charging, although it’s true that longer trips require some planning. But the future of eMobility is not just cars – they are just one aspect of emission-free transport. Equally important is how cities are built, how much commuting there is, and the extent to which people share vehicles. We still have a long way to go on that,” says Haubová. 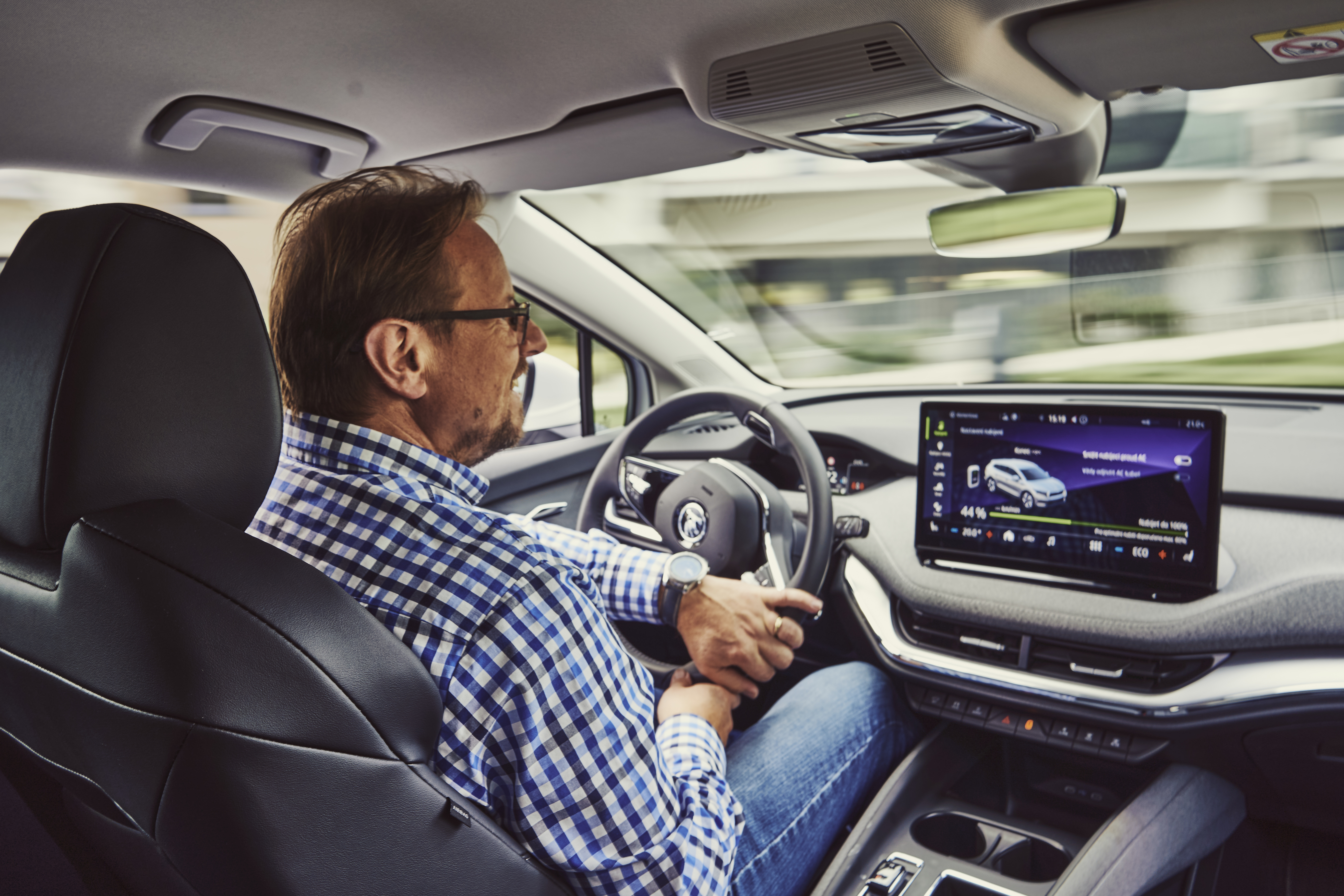 Jan Juchelka also says he is not merely an uncritical electric car fan. “I’m someone who is unlikely to go back to a car with an internal combustion engine. For me, eMobility represents a complete change in our habits associated with getting from one place to another. But I admit that even in my case there is a tiny worm of insecurity and fear about not having a place to charge. I wish our infrastructure was being built much faster,” says the Komerční banka CEO and happy ŠKODA ENYAQ iV driver.

KOMERČNÍ BANKA ON THE ROAD TO CARBON NEUTRALITY 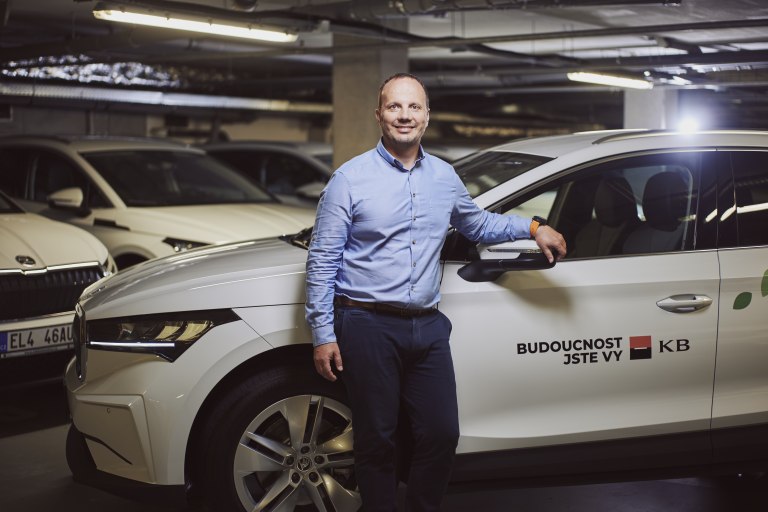 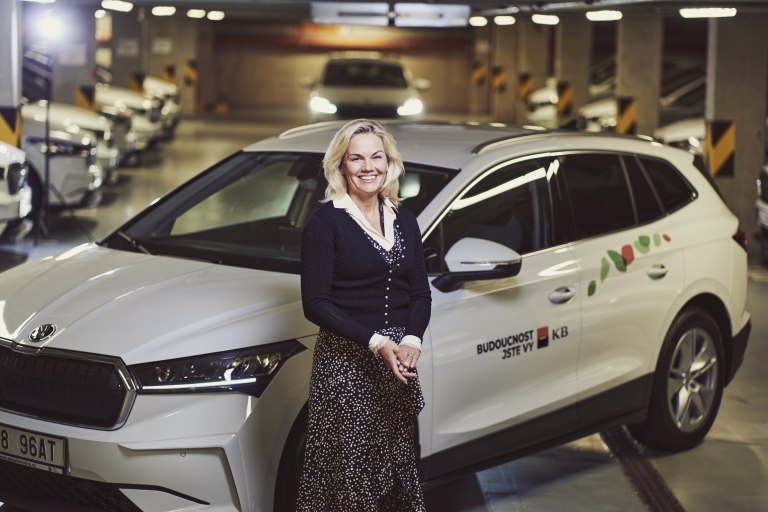 Jitka Haubová, member of the board of directors of Komerční banka 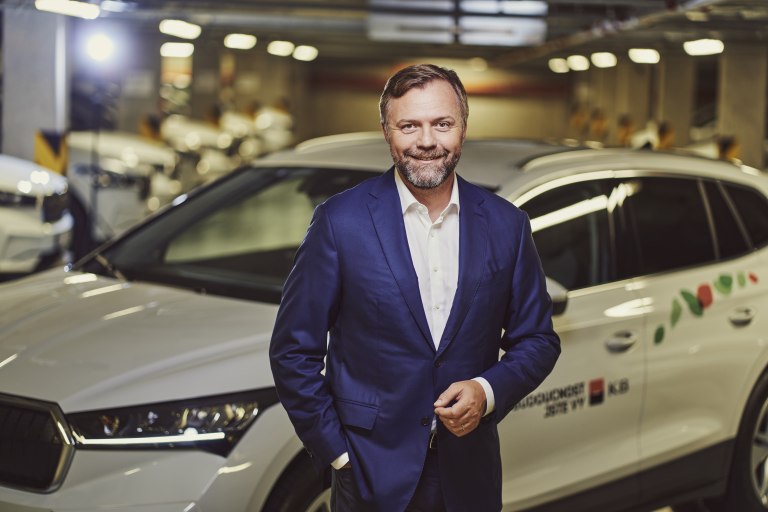 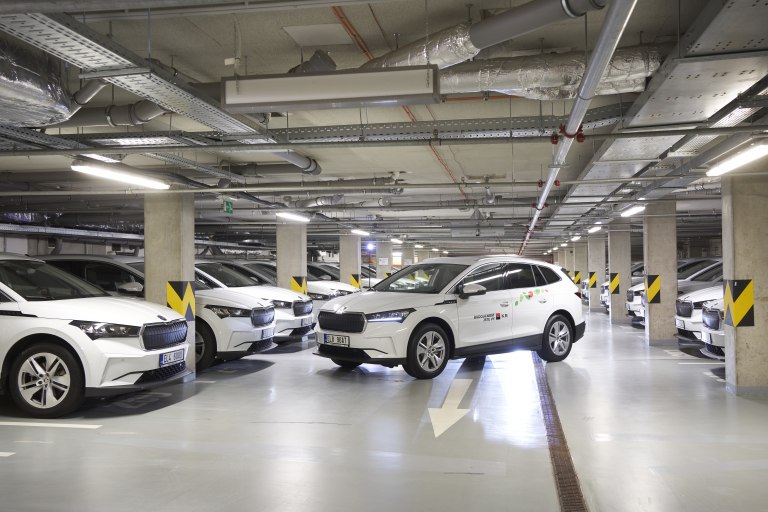 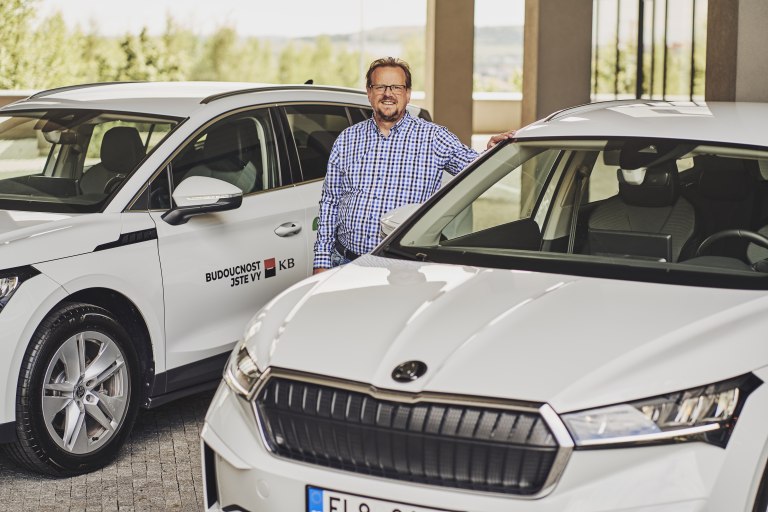 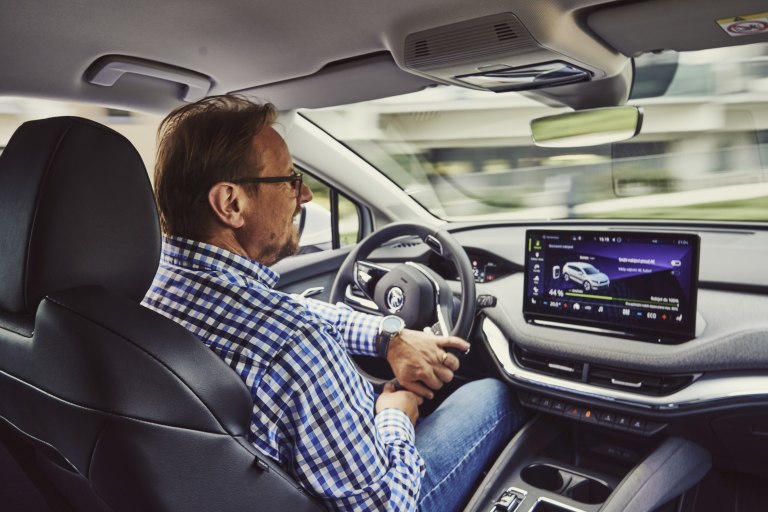