ŠKODA electric cars and plug-in hybrids are an important part of the fleet of Norwegian public broadcaster NRK. Among other things, the station broadcasts live from a ŠKODA ENYAQ iV SUV. Find out what makes this car the ideal choice for the station.

The Norwegian public broadcaster NRK has a fleet of around 400 vehicles. 320 of these are passenger cars and the majority are ŠKODAs. “We mainly use the OCTAVIA model, which is ideal for our purposes,” says Pål Brynhildsen, NRK’s fleet manager. 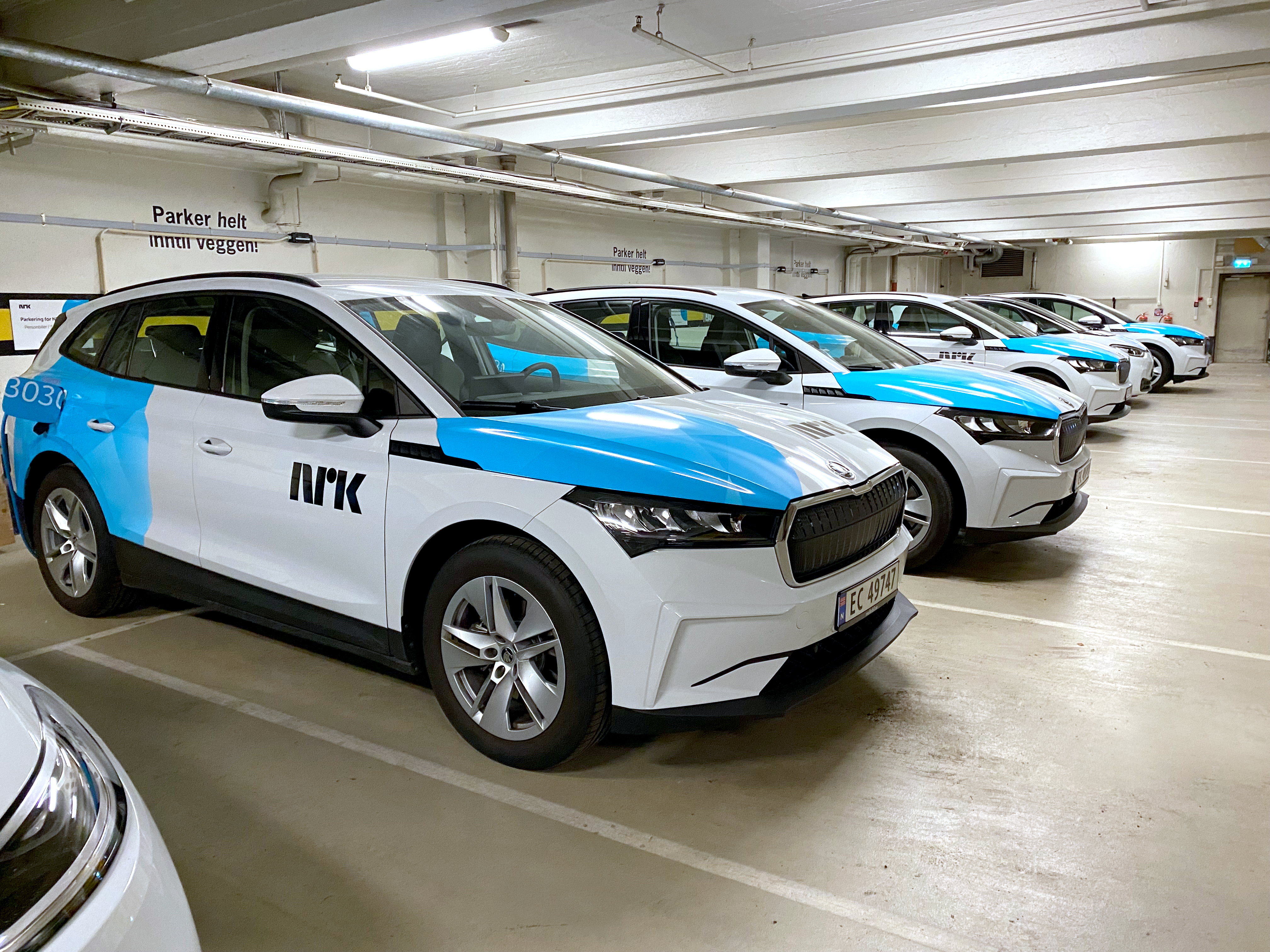 He goes on to say, however, that the fleet will undergo a major transformation in the coming years. “Within a few years we want to have 80% of the cars in our fleet completely emission-free,” Brynhildsen says. For that reason, NRK has already added ten OCTAVIA iV plug-in hybrids and ten ENYAQ iV electric SUVs to its fleet. And it is the numbers of this model in NRK’s service that are set to increase dramatically in the coming years. The station replaces about seventy vehicles from its fleet every year, and the ENYAQ iV is expected to make up a significant portion of that number. 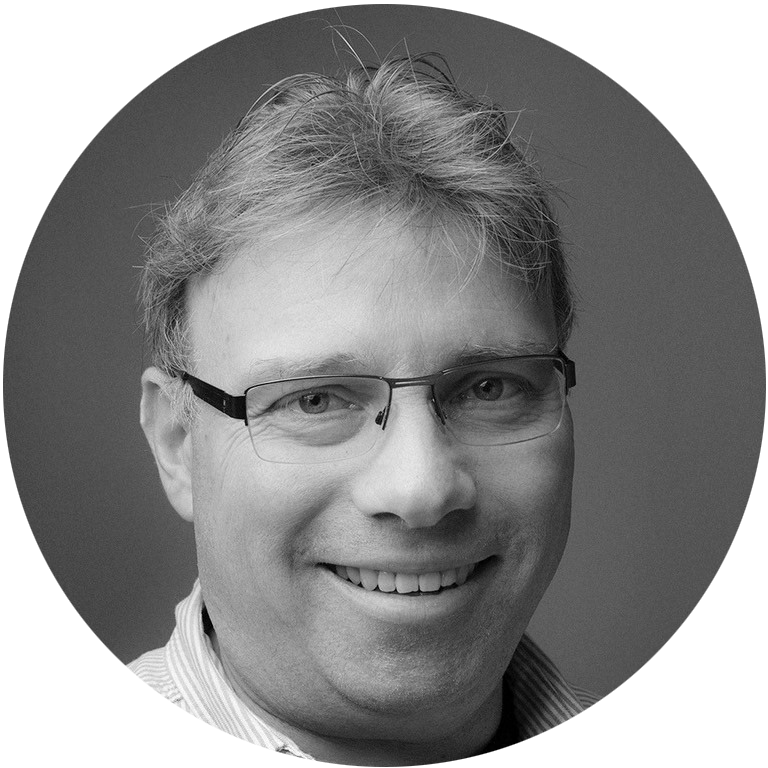 As the number of electric cars in NRK’s fleet grows, their users, i.e. NRK’s journalists and cameramen, get used to them. Even in Norway, where they are well ahead of the rest of the world in terms of electromobility, there are people who may initially be sceptical about electric cars. But NRK’s rules for the use of company cars are set up in a way that ensures that the vehicles’ users prefer electric vehicles. 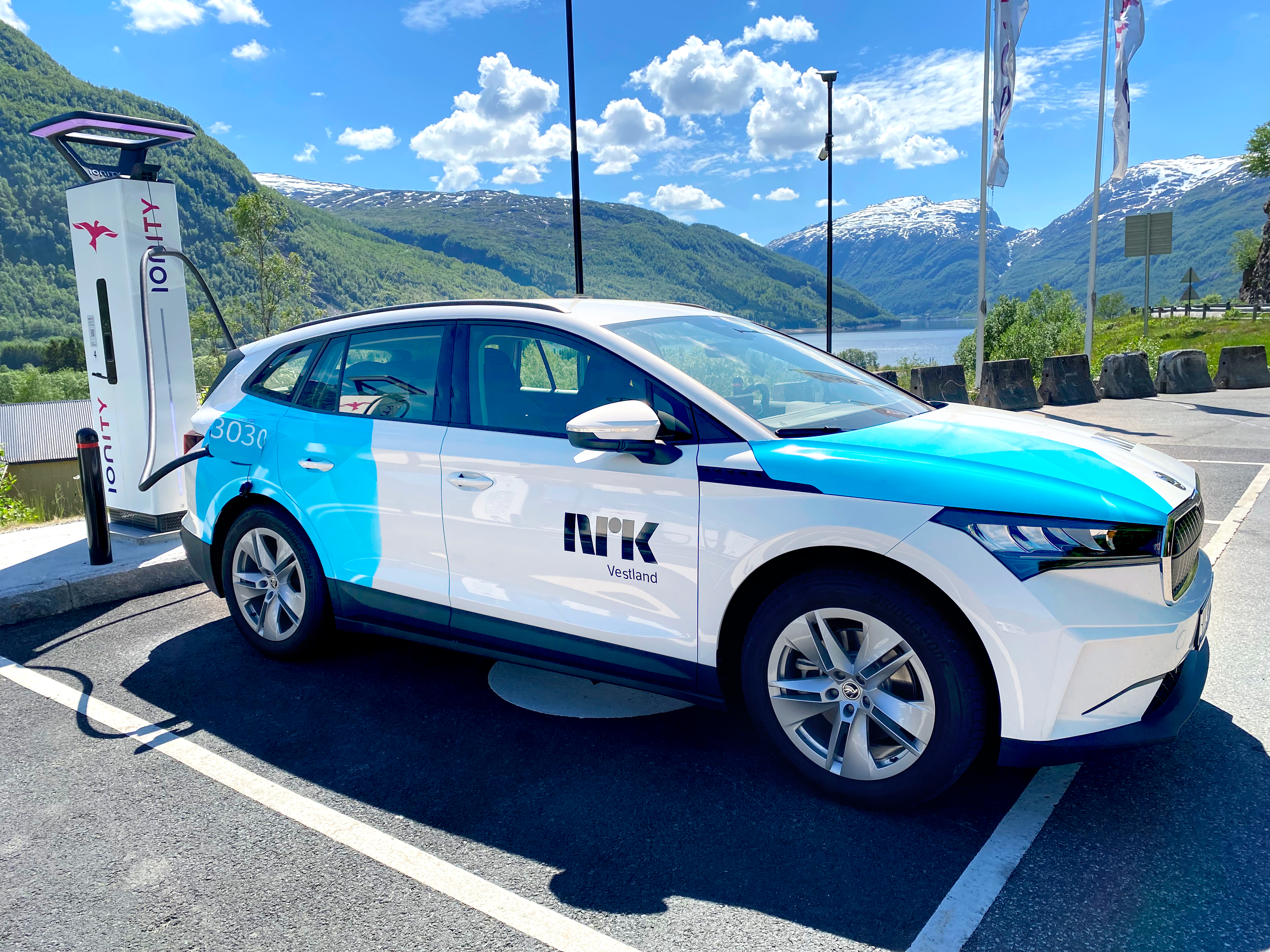 “We have had to teach our users that even though their journey may be longer than the range of an electric car on a single charge, this is no problem. Many didn’t believe it, but after they tried an electric car two or three times, they learnt how to use it and their complaints disappeared,” says Brynhildsen. He says it has never happened that the driver of an electric car in NRK’s fleet has been left stranded somewhere because the battery ran out. 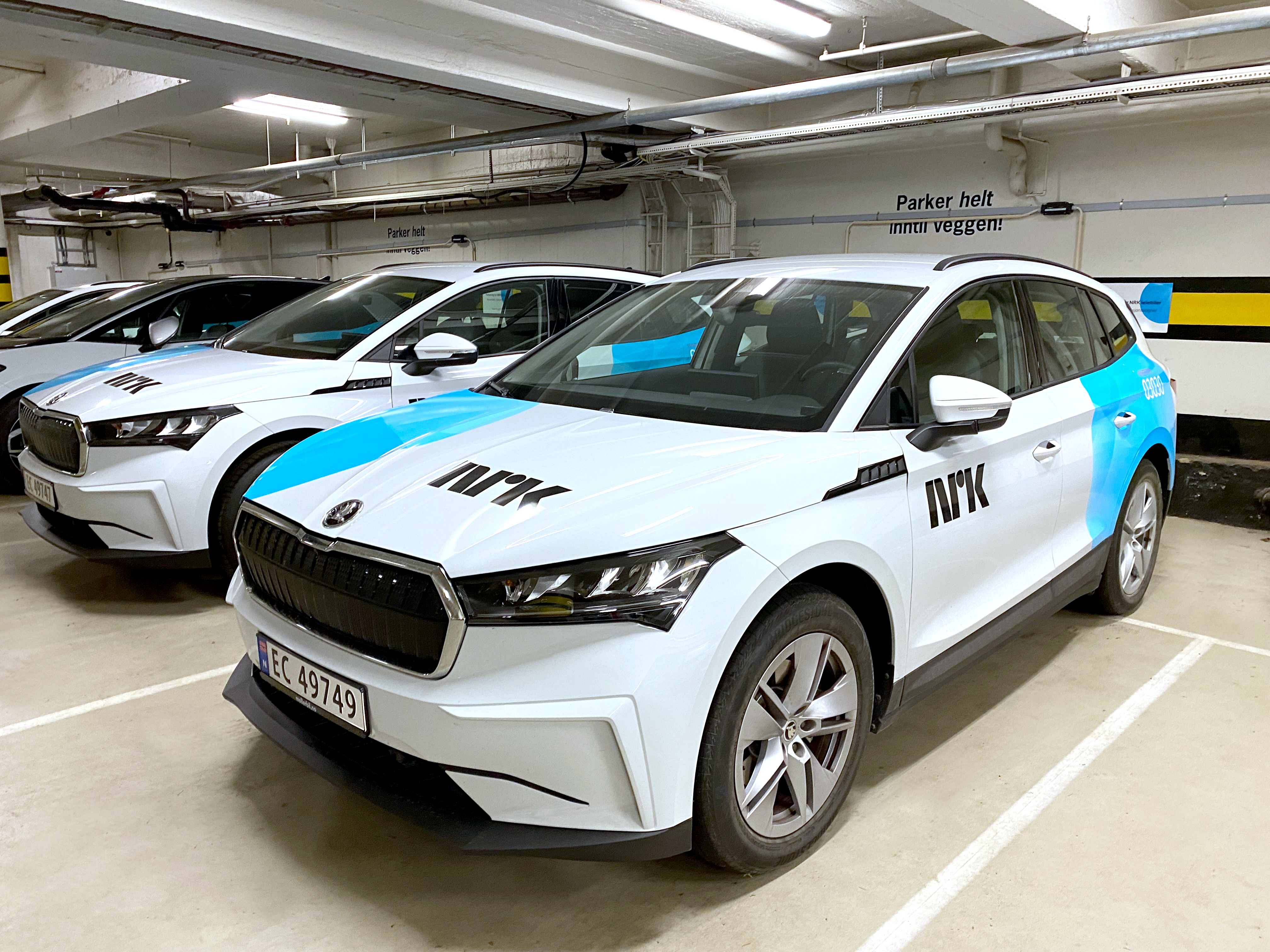 “We teach our users that driving and charging an electric car is a bit different from a conventional car. We tell them to charge whenever they can, not when they need to. That they should charge for a short time, if they have 100 kilometres to drive home: they should charge only for that journey and then complete the charging at home or in our company garages,” Brynhildsen explains. Indeed, according to his data, the vast majority of NRK’s electric cars are recharged overnight in the station’s garage or at users’ homes, with fast charging on the road used as an extra option and accounting for about 10% of all cases. “But I have to commend the fact that fast charging, for example on the ENYAQ iV, works excellently,” says the fleet manager.

Ready to go in the morning

According to Brynhildsen, electric vehicles have a number of advantages for NRK. “We lease the cars, and renting an ENYAQ iV like this costs us essentially the same as renting an OCTAVIA or KODIAQ, partly because of the tax burden on internal combustion engine cars,” he says. But the main difference is the running costs. “The cost per kilometre of an electric car is about a third or a quarter of that of a petrol or diesel car,” Brynhildsen compares. 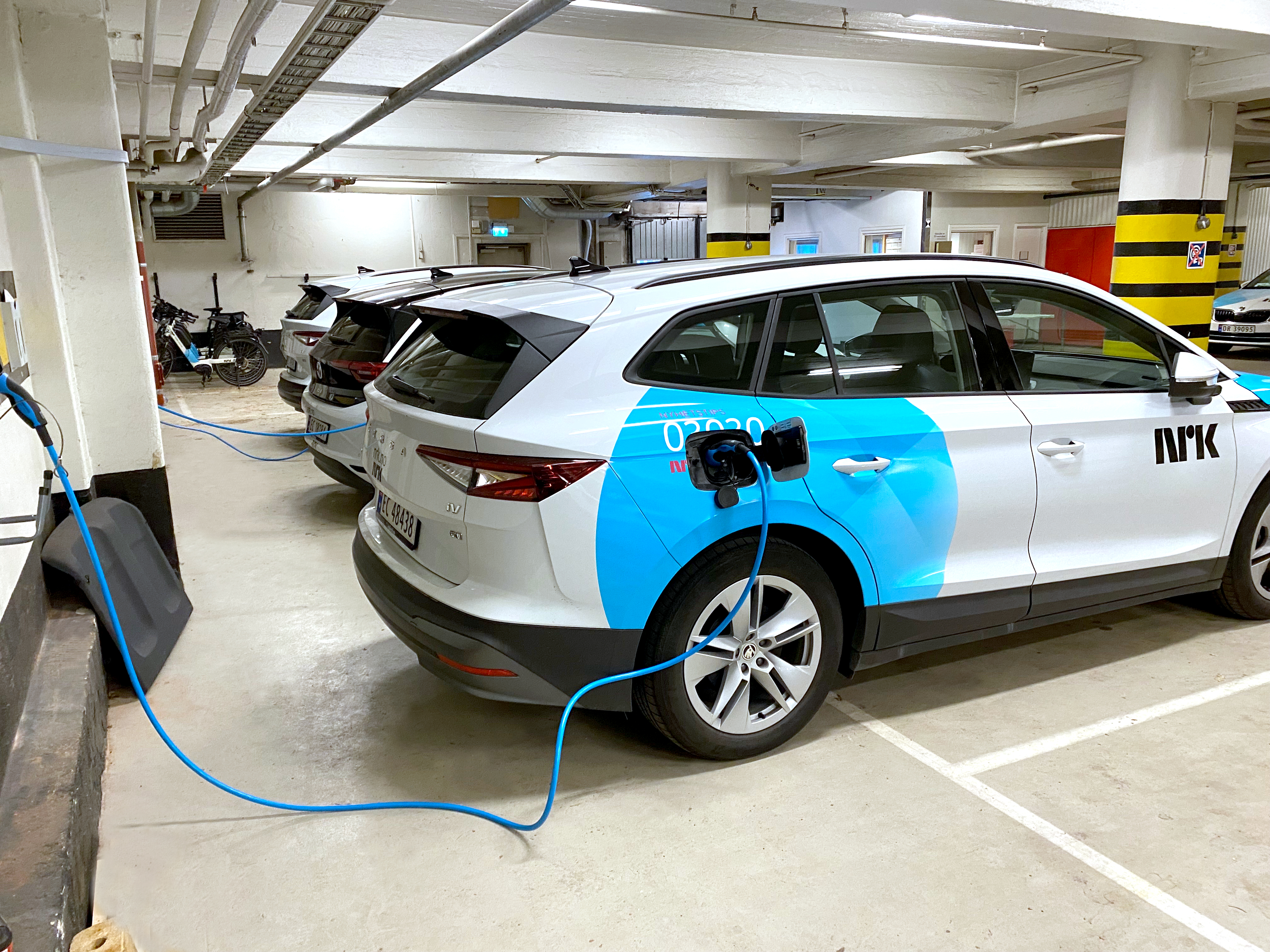 One of the interesting advantages that has emerged is that electric cars do not hold up their users when they start work in the morning. “What happens with a conventional car is that, for example, the previous user didn’t fill up the tank in the evening and the tank is empty, but in the morning the electric car is in the garage fully charged and ready to go,” explains the fleet manager. There are a total of 25 chargers in NRK’s central garage in Oslo, and the number is set to rise. The cars are then used all over the country, including more remote areas. And even there they function without any problems. 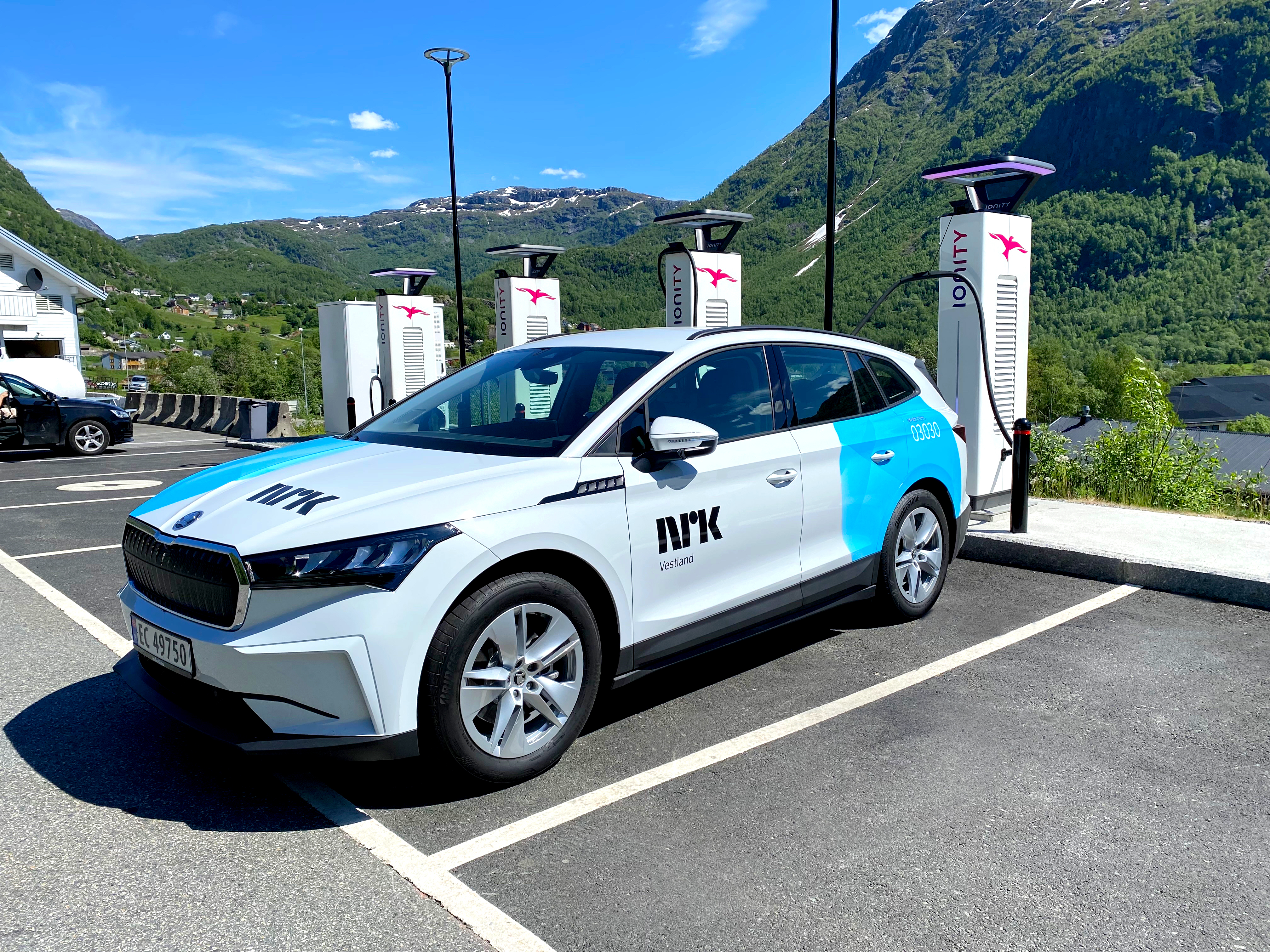 Brynhildsen says the electric cars are also good for NRK in terms of image. This is because the special registration plates they issue for electric cars in Norway make the car clearly identifiable as an electric car, and the cars naturally carry the station’s logos on them, so the public associates NRK with care for the environment. “We want to set an example to the public in this way,” explains Brynhildsen.

NRK has fitted out one of its ENYAQ iV 60 vehicles so that it can broadcast live from the scene. All the equipment needed for this is powered by the SUV’s batteries. “At first we were a little worried that the technology would drain the battery quickly, but our experience shows that it works great and there is nothing to worry about,” smiles Brynhildsen, adding that recharging the car would only be necessary if the broadcasting had to continue uninterrupted for several days. 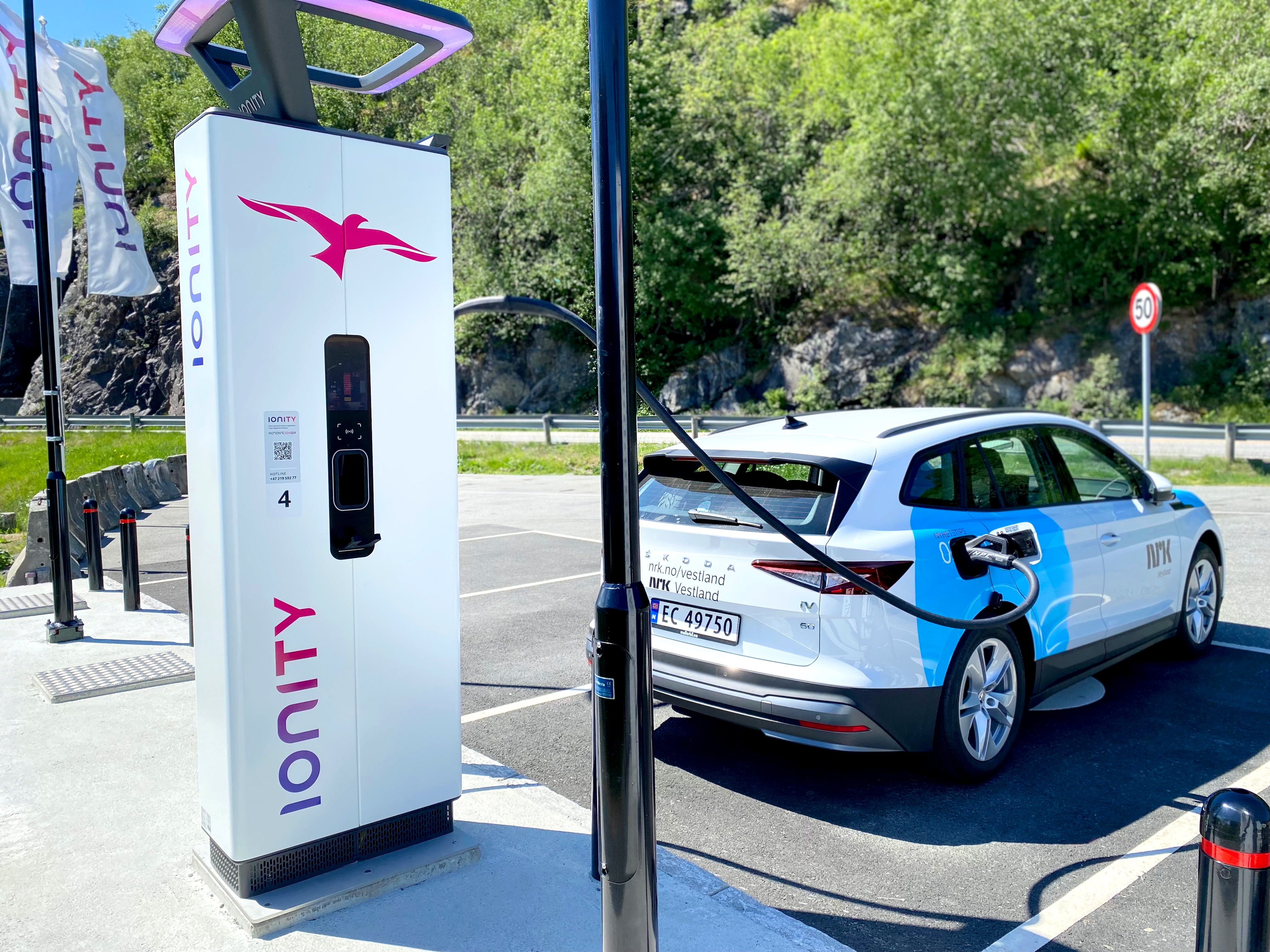 Based on this experience, NRK decided to equip another ENYAQ iV, this time an ENYAQ iV 80, with the option of satellite transmission. “We will have a dish on the roof of the car, so will be able to broadcast from absolutely anywhere,” Brynhildsen explains. Even from remote areas where there are no fast chargers, for example. But charging opportunities are plentiful in Norway, and Brynhildsen adds, “Not every charger is a fast charger. But it’s a charger and it will top up the car’s energy.”

WELCOME TO OUR LIVE BROADCAST. FROM A ŠKODA ENYAQ iV 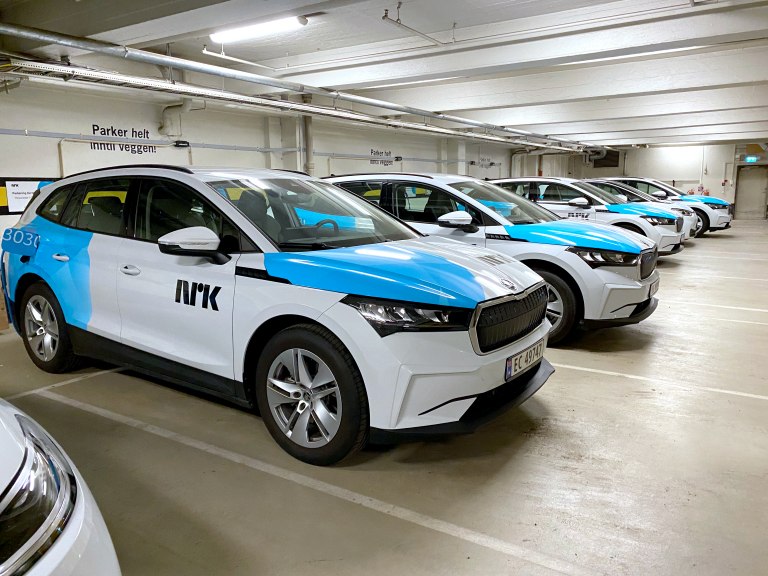 Norwegian public broadcaster NRK has a fleet of around 400 vehicles. 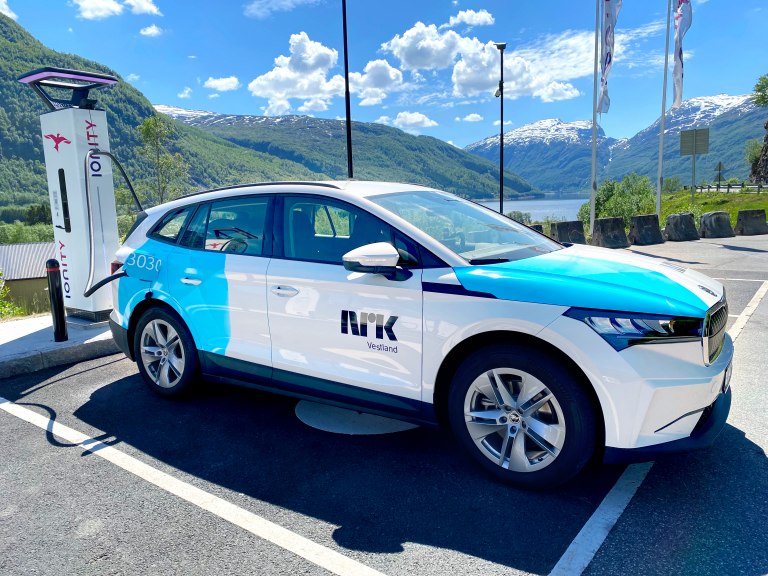 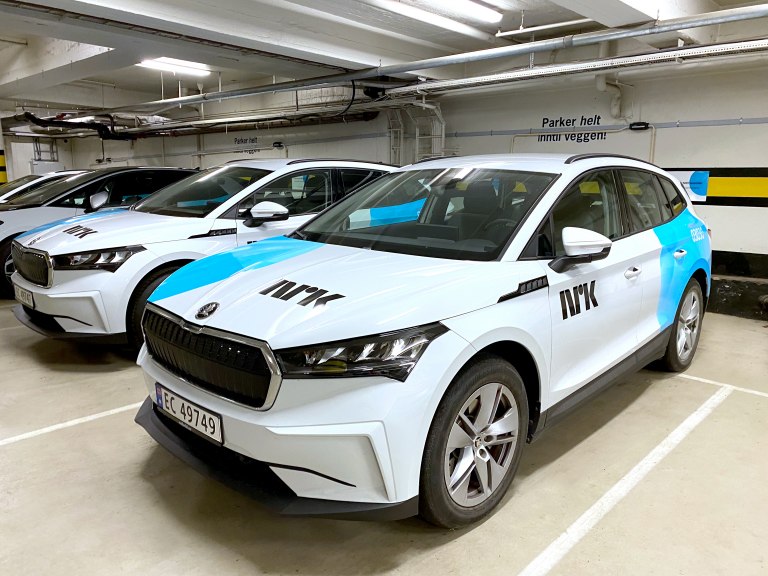 The majority of electric cars are recharged overnight in the station’s garage. 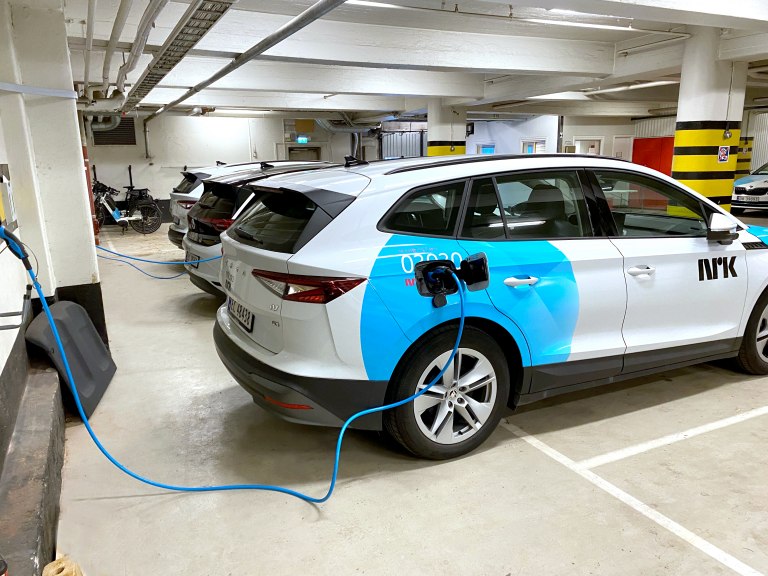 There are a total of 25 chargers in NRK’s central garage in Oslo. 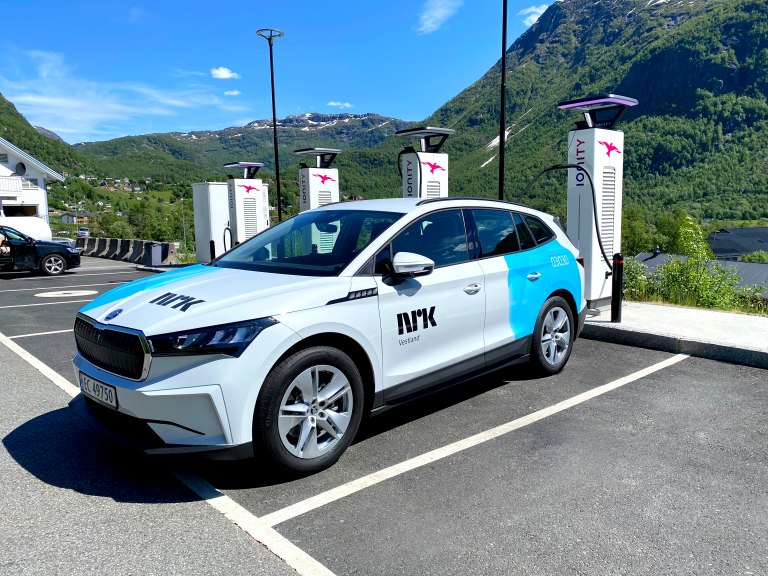 ŠKODA electric cars are an part of the fleet of Norwegian broadcaster NRK. 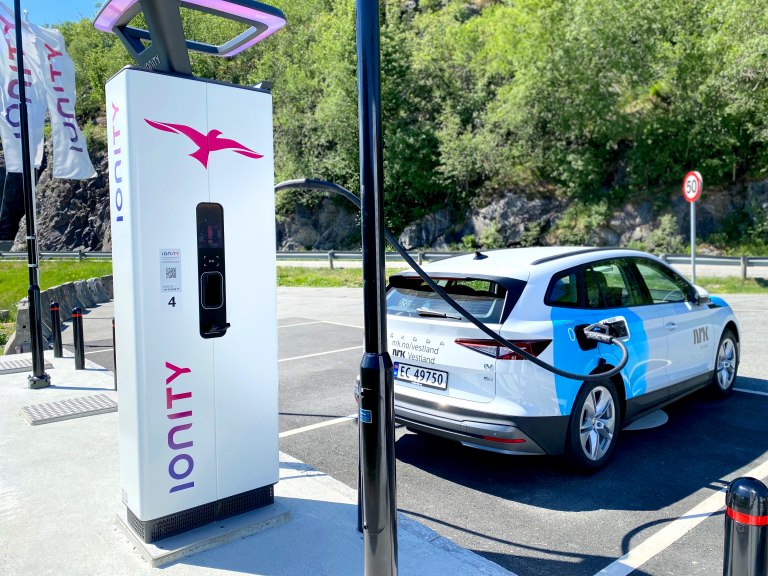 There are plenty of charging opportunities in Norway.