A Danish explorer has been travelling the length and breadth of Europe in his ŠKODA 110 L for thirty years. Why does he call his car Šemík, after a horse from a famous Czech legend, and what’s the furthest he’s gone?

Travelling fifteen or twenty thousand kilometres in one holiday? That’s a piece of cake for Tue Pol Halvorsen. His car has already racked up three hundred thousand kilometres! “I’ve been fascinated by cars ever since I was a child. I collected articles, pictures and books about them,” begins the seventy-year-old Dane, who earned a living as a bus driver in Copenhagen until his retirement. 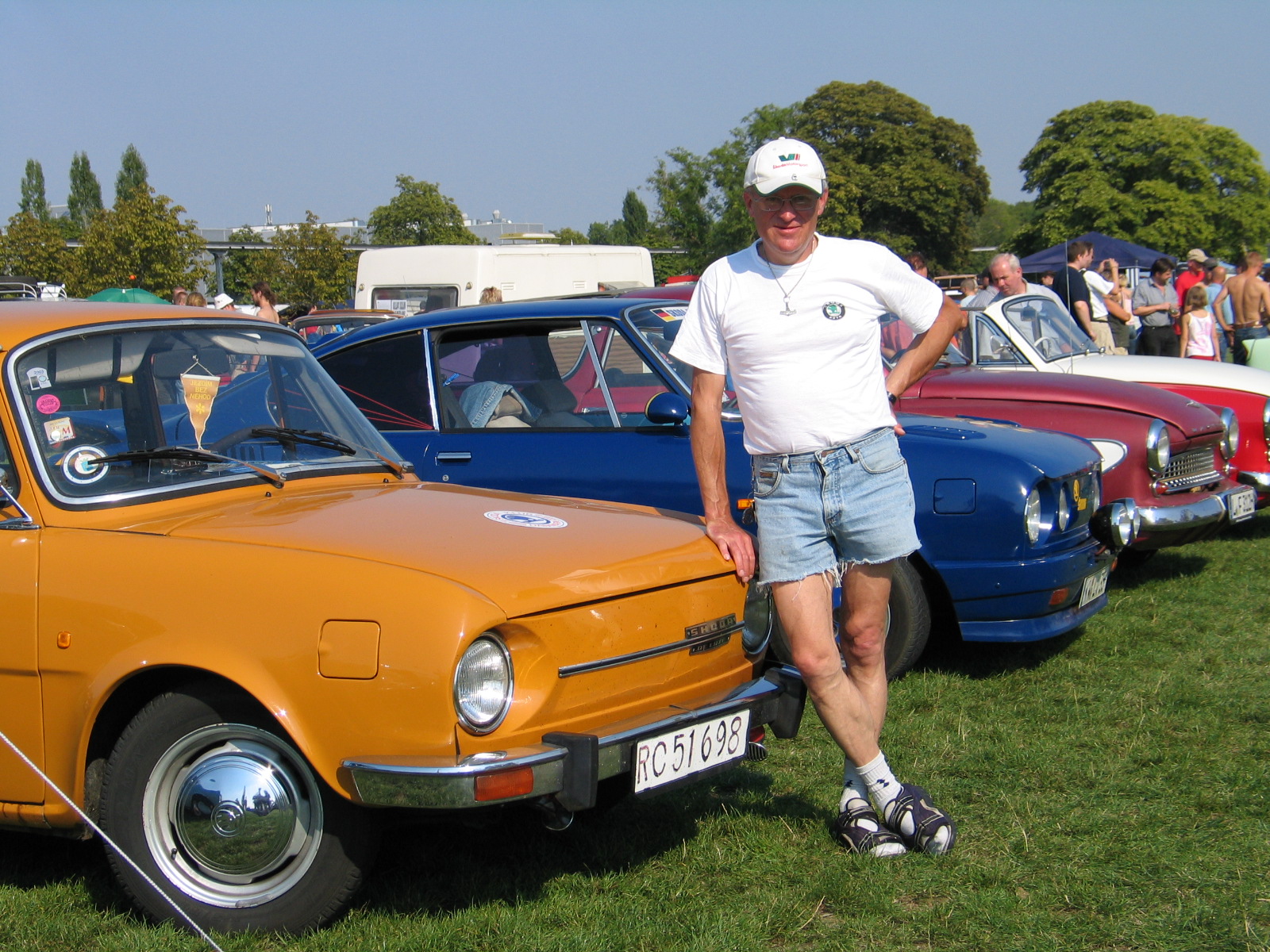 In 1984 he went to what was then Czechoslovakia for a week’s holiday for the first time. “While I was waiting for my visa at the embassy in Copenhagen, my eye was caught by a motoring magazine that covered the history of the LAURIN & KLEMENT and ŠKODA brands. Of course I knew that Czech cars existed, in fact they were already one of the most popular brands in Denmark at that time. But otherwise there wasn’t much information in Danish. After returning from my trip, I started to do more research,” he explains.

So he wrote a one-page leaflet about ŠKODA cars, which he sent on a sudden impulse to Motokov, a company that exported cars from socialist Czechoslovakia before 1989. And he added a request to visit the ŠKODA museum. He didn’t really expect anything to come of it, but after about six months a reply arrived from the Czech brand’s Danish importer with a telephone number in Prague to call and the name of the person he should ask to speak to. 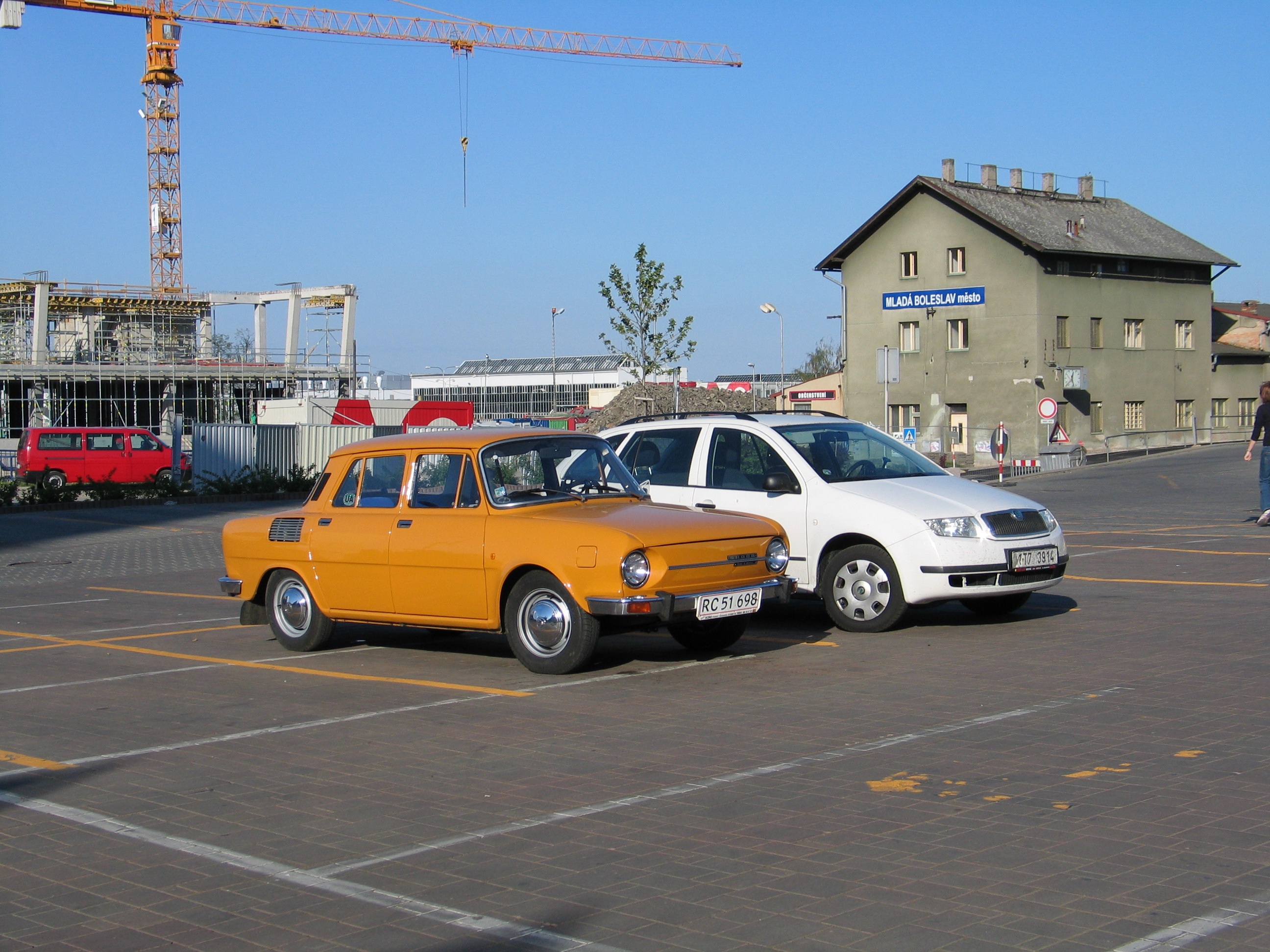 One of his numerous stops in Mladá Boleslav, this time in 2007

“I was pretty nervous, and I spent a few days rehearsing my speech in German in my head. It was my first phone call abroad and in a foreign language. I got through to the person, and after a few sentences he said, “Let’s speak Danish”! It turned out that he used to work at the embassy in Copenhagen and lived a few streets away from me. We were basically neighbours,” Pol laughs.

The trip to Prague turned out a success, as was the visit to the museum in Mladá Boleslav and the Tatra factory in Kopřivnice. “Unfortunately, they didn't take me to the factory in Boleslav. It was strictly out of bounds for the public because the premiere of a brand new model was about to take place.” That car was the FAVORIT. 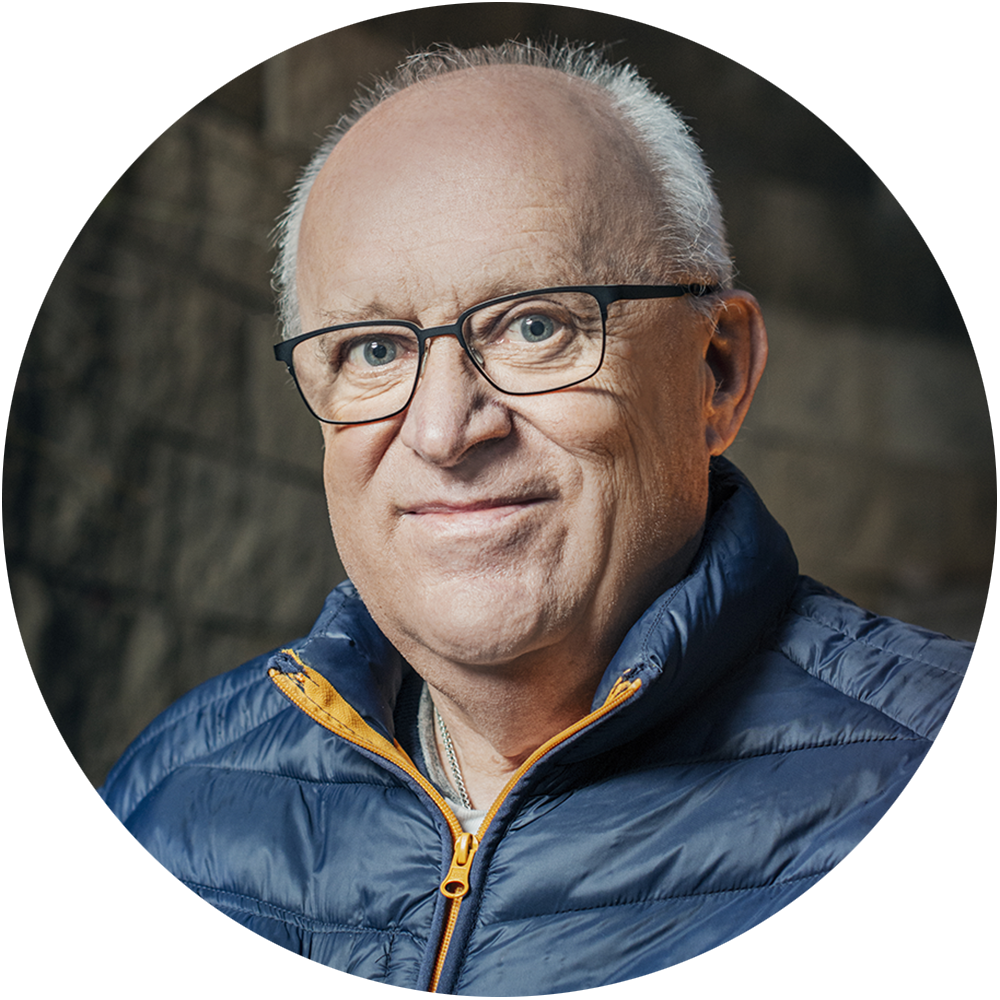 Fifteen years in the backyard

But it was a slightly older model, the ŠKODA 110 L, that won his heart. How did he get his hands on it? “Thanks to the Danish importer who printed my article in his materials, I came into contact with the ŠKODA owners’ club and shortly afterwards became a member, even though I didn’t have a Czech car. In addition, I became the editor of their club magazine and also started to contribute to it. One day a letter came from a Danish dealer saying he had an old 110 and asking if anyone in the club would be interested. The original owner had died and the car, with just seven thousand miles on the clock, had sat in his backyard for fifteen years. Yes, you guessed it, I bought the car in 1994.” 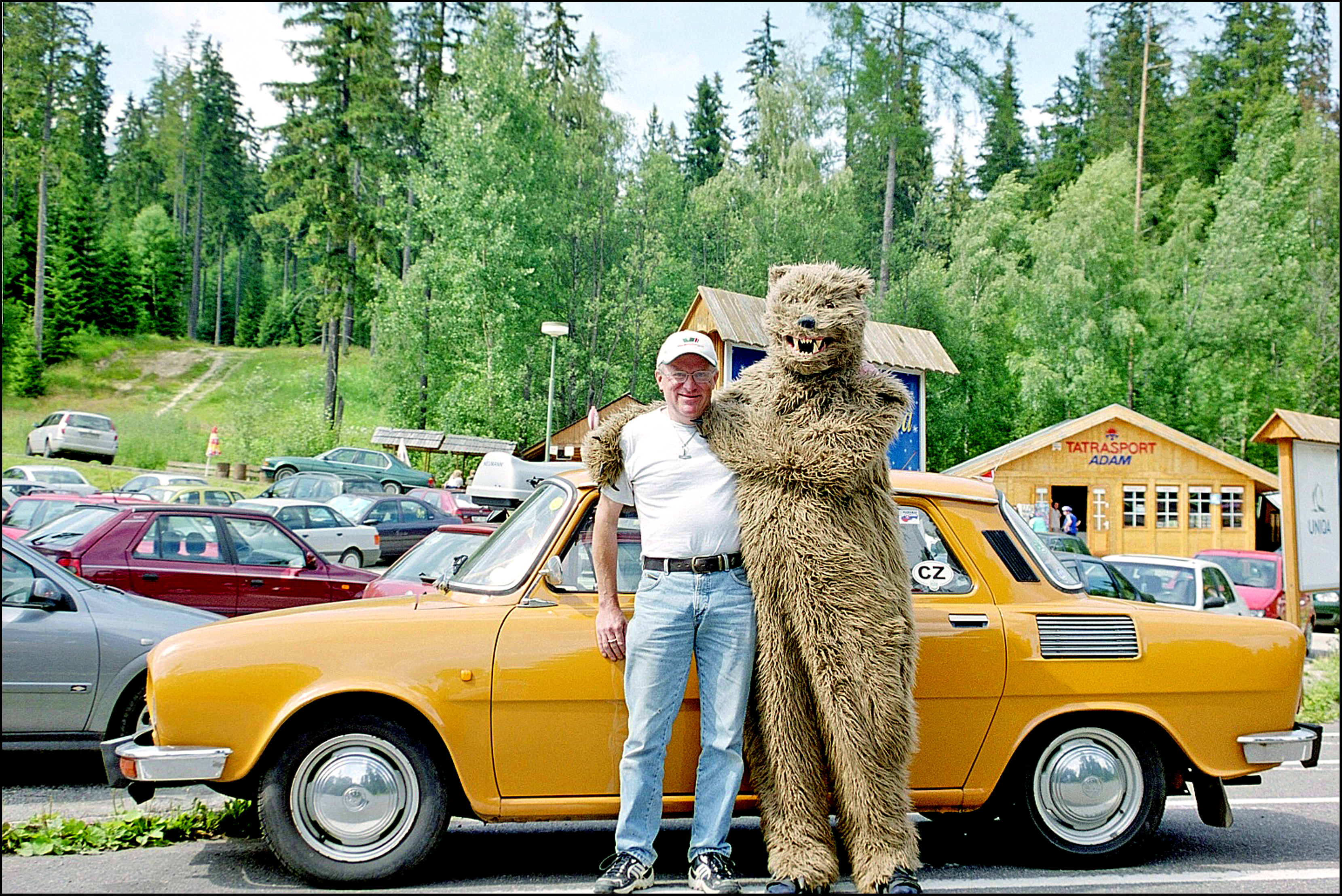 Tue Pol in Tatranská Lomnica (Slovakia) in July 1998 – there’s clearly no shortage of fun on his travels.

The car had a lot of rust by then, but one of Halvorsen’s friends, a skilled mechanic, fixed it up. Since then, Pol and his car have been inseparable, spending virtually all their holidays at meets in the Czech Republic, Slovakia – and much, much further afield.

Moreover, Tue Pol Halvorsen found an elegant solution for servicing such a veteran: the start point of each of his long European trips is a friend’s service centre in Ústí nad Labem in North Bohemia. It was usually also the end point of his travels, so that his ŠKODA 110 L would receive the very best care. Maybe that’s why the car has never had a major breakdown.

Why is it called Šemík?

Tue Pol Halvorsen calls his ŠKODA 110 L “Šemík”. Why? “After I retired, I spent a week at my friend’s place in Prague. There I discovered a book about Czech legends, and I read about a chieftain called Horymír and his horse Šemík. According to the legend, the horse saved his master’s life by making a huge jump down from the ramparts of the royal palace at Vyšehrad in Prague. It may only be a legend, but it struck a chord with me, and I decided to call my car Šemík. After all, it jumps a long way as well – from Copenhagen to Prague and back!” He even attached a plate with the name on the back of the car. 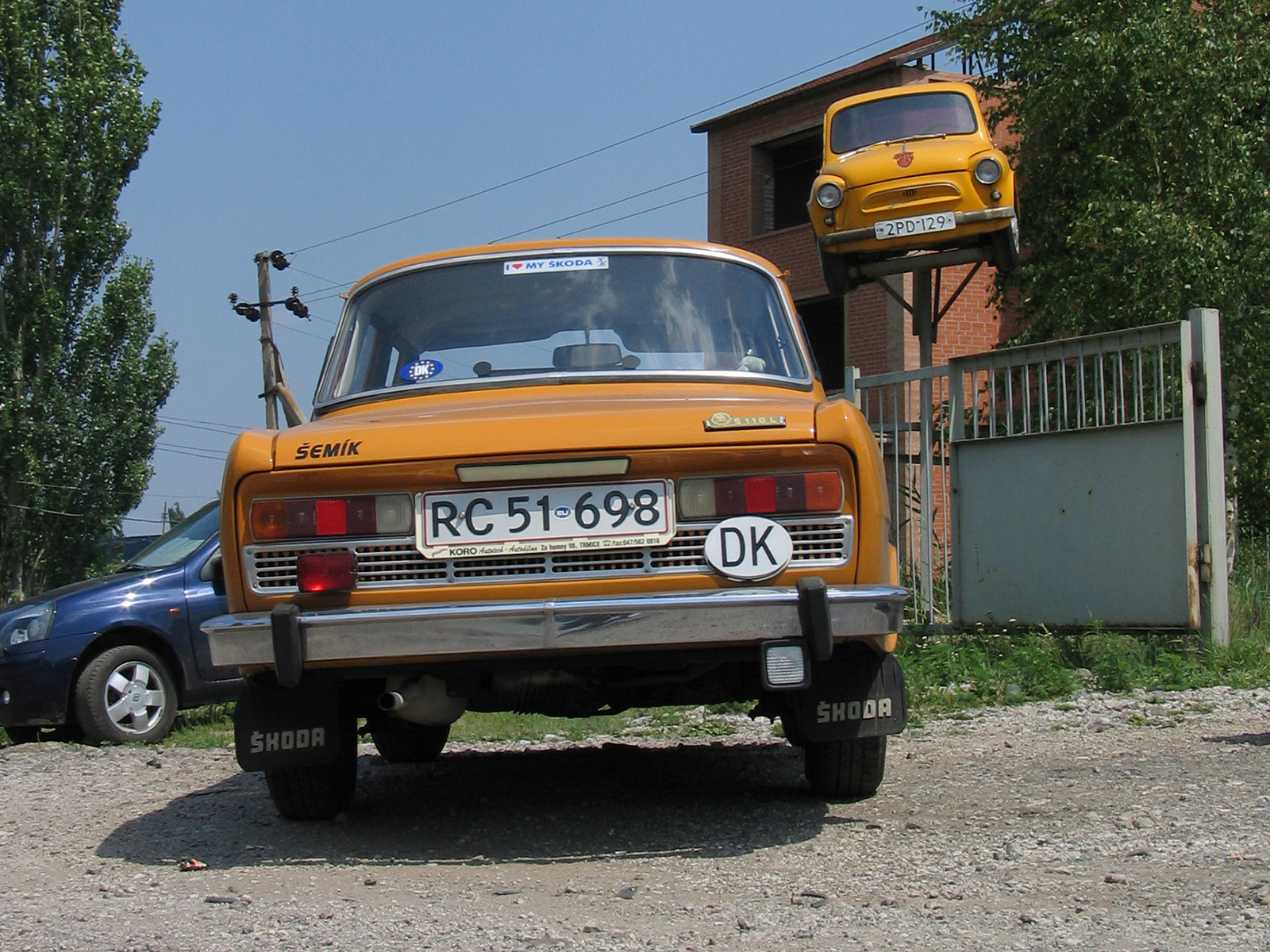 Pol retired in 1998, and this had one positive consequence: he began to take longer and longer trips. Four weeks, then seven, then two or even three months. The year 2005 was no different and found him exploring Central Europe. “Back then, you didn’t need a visa to enter Ukraine. And I happened to be in Poland, not far from the border. So why not go to Ukraine?” 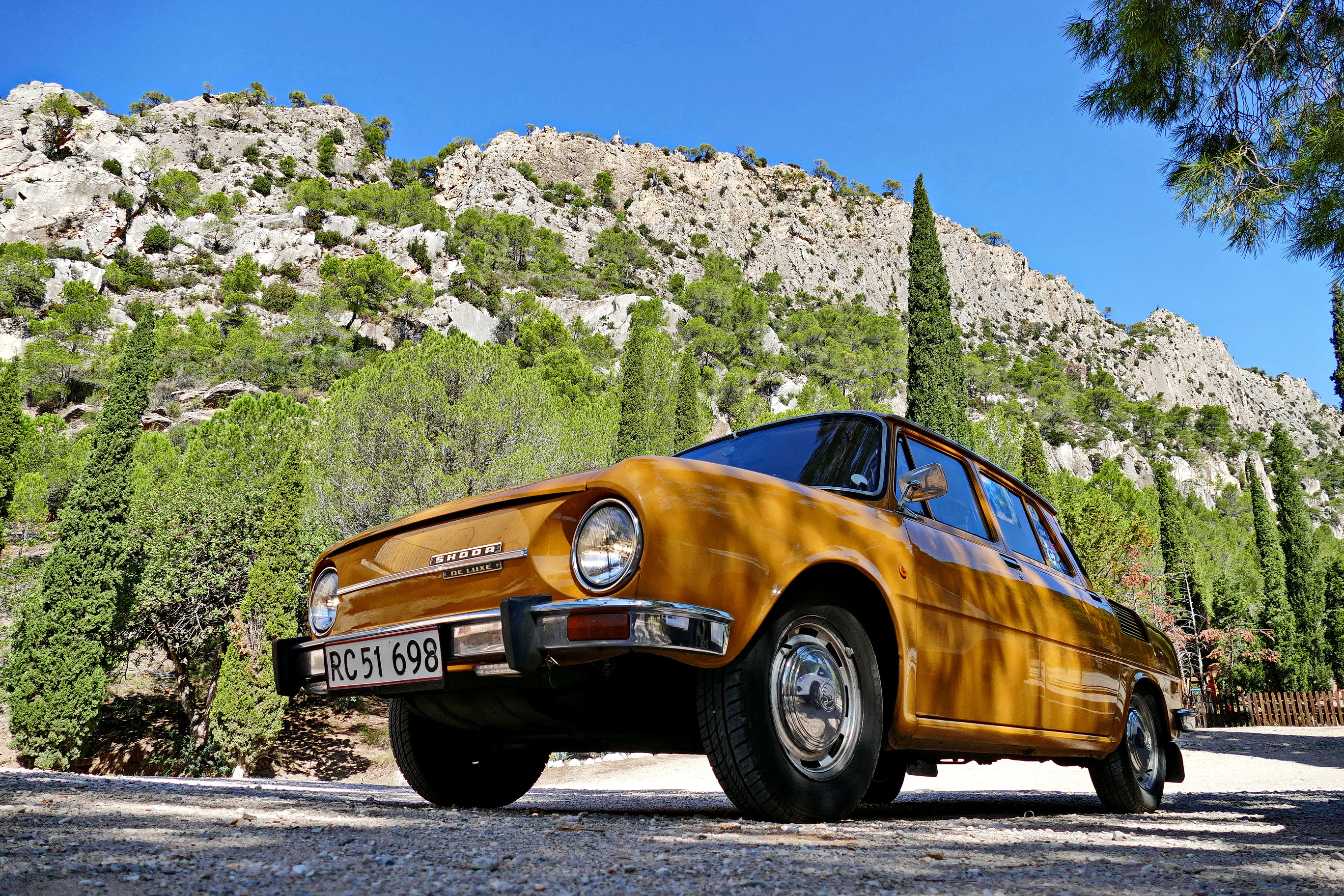 Pol travels all over Europe, for example in 2019 he was lured by Spain and the challenging Vía Verda de la Terra Alta in southern Catalonia.

This is how he began to stray beyond his previous turf of Czechia, Slovakia, Poland and Hungary. He went back to Ukraine two years later. “I met a young Ukrainian who was studying in our country. He told me about an American road movie called Everything Is Illuminated, which is about a man who sets out to find his roots. He drives around Ukraine with a friend in an old Trabant and dreams of finding a “superhighway” to Lutsk. And I decided I wanted to discover it too. So I set off. I even made it to the places where the film was shot.” 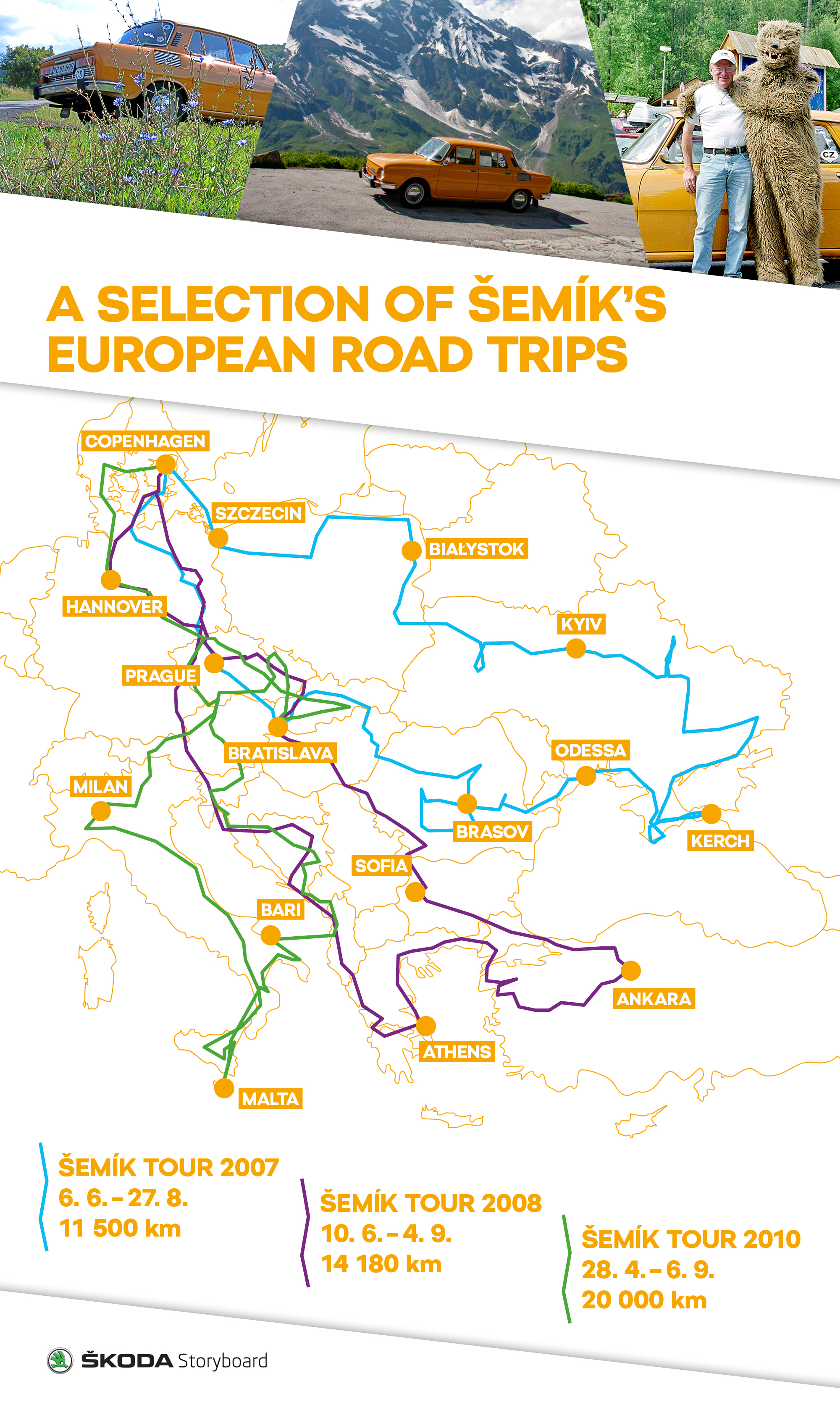 Wanting to see Kyiv, he continued east. While there he remembered the film The Battleship Potemkin, which he had watched as a child, and chose Odessa as his next destination. Eventually, he made it as far as Donetsk, before driving through the Crimea to Romania and back home.

The next year he repeated his expedition to Crimea. “I lost my glasses while swimming in the sea. Local legend has it that if you lose something in the Black Sea, it will be cast onto the shore on the other side at the Bosphorus. So the following year I set off in search of my precious glasses, travelling through Istanbul to Ankara and through Bulgaria and Romania to the Czech Republic.” 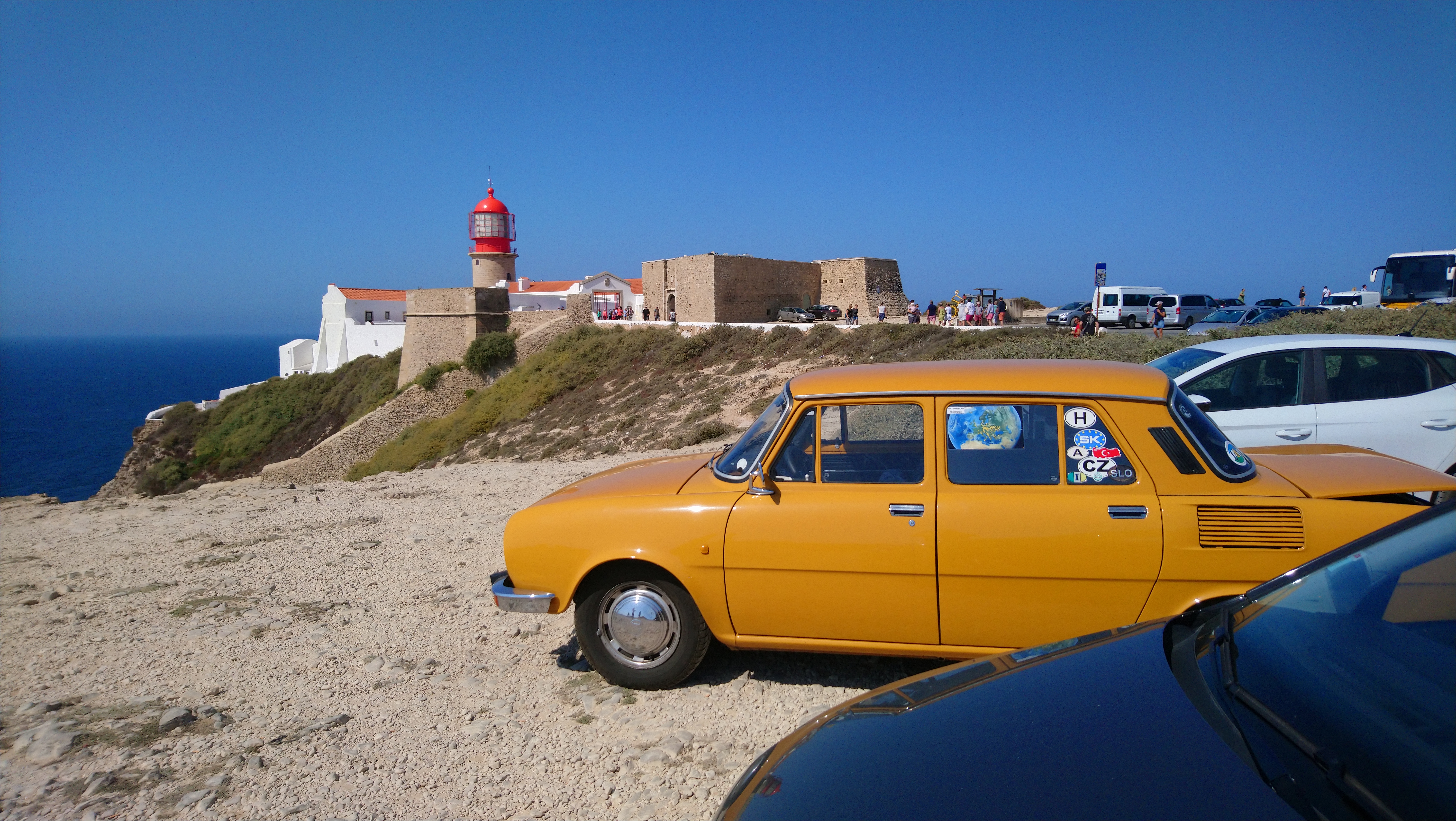 As far southwest as you can go in Europe. Farol do Cabo de São Vicente in 2019.

The year before last, his road trip was little bit shorter, but this time he headed north. “Everything was closed because of Covid, but at one point Norway opened up for about two weeks. And I’d never been to the North Cape, which is often described – though probably wrongly – as the northernmost point in Europe. So I went there, turning back before reaching Sweden. On this trip I discovered my trusty horse’s biggest weakness: the heating hadn’t been built with Norway in mind,” he recalls. 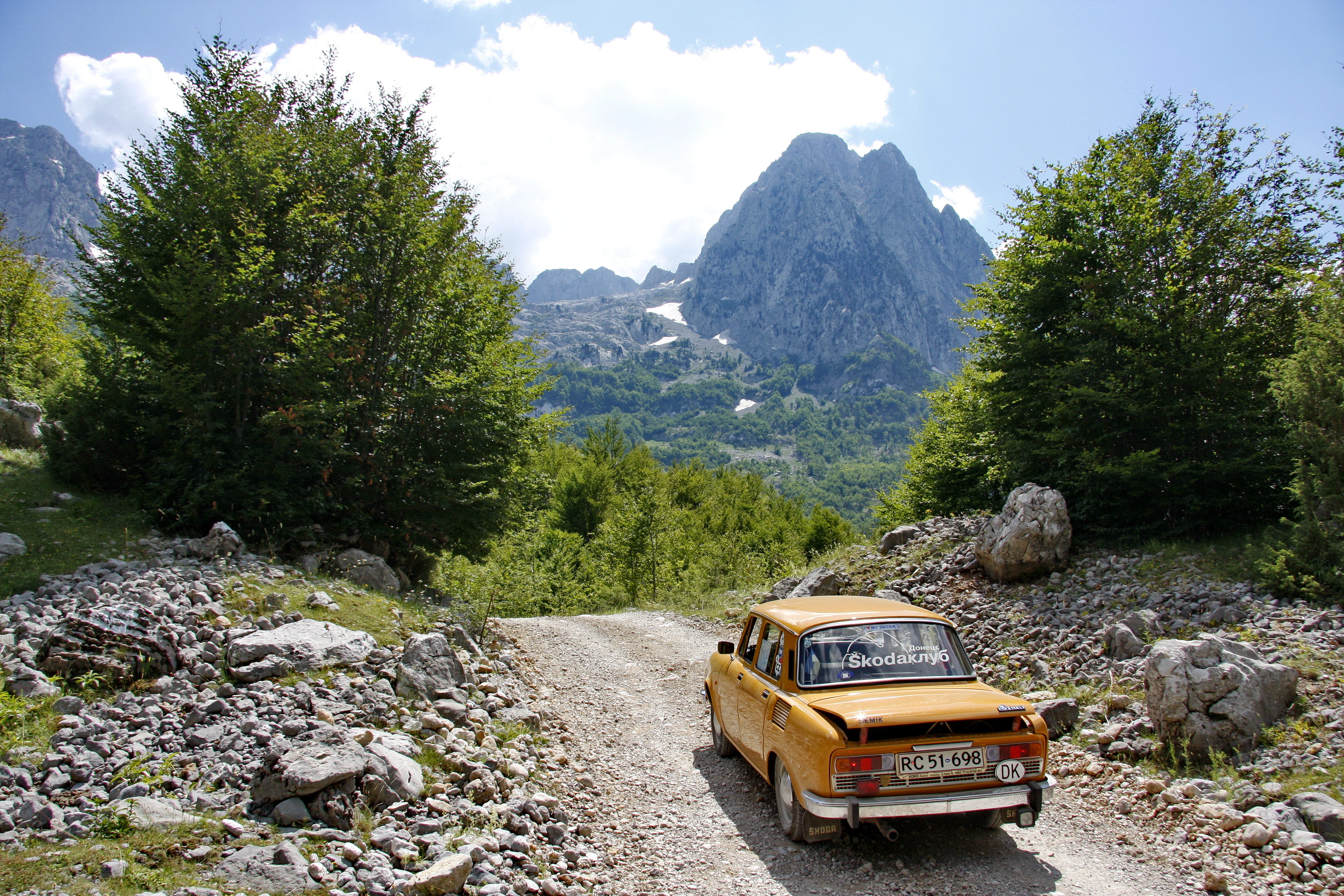 Otherwise, the car suits him perfectly, even more than modern cars. “My Šemík is small, but I find it quite comfortable. After all, I’ve been sitting in that seat for the last thirty years, so by now it’s perfectly shaped for me,” laughs the Danish explorer. Tue Pol has a radio in his vintage car, but he usually leaves it off – he says he prefers to think while driving.

All kinds of weird ideas occur to him while he’s driving. “A year after I found out about Šemík and I decided to call my car that, I drove to the village of Neumětely, where there is a monument to the car’s mythical namesake. Naturally, I took a picture of us there. That was no problem. But then I had the idea of taking a similar photo with the car at Vyšehrad. I parked in front of the gates and went to reconnoitre the area: a sign saying no unauthorised vehicles, but lots of people and a few parked cars inside. I took a chance and drove in. After taking some photos, I was stopped by a policeman on the way out. He didn’t speak much English, and I spoke even less Czech, but I tried to explain to him why I had done what I did. He was uncompromising and insisted on a fine. I took him round to the back of the car to show him the name plate. He quickly understood, laughed and let me go. That’s the power of the legendary name in the Czech Republic,” he says. 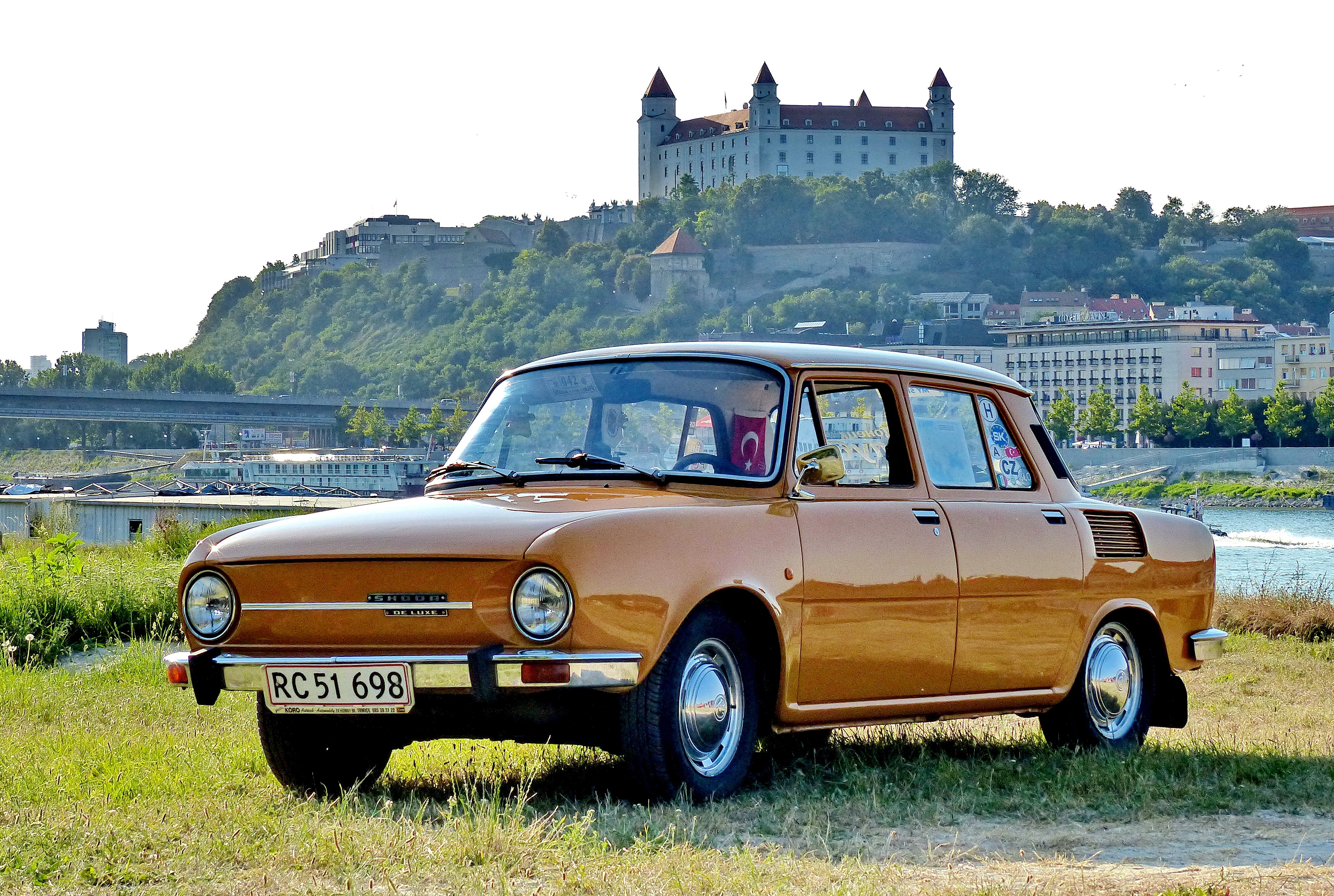 Stop in Bratislava on the way back from Turkey

And he adds one more funny story. He’s on the road leading from the city of Karlovy Vary to the motorway. The speed limit is seventy kilometres an hour. “Šemík is fast. I thought I was going seventy, maybe seventy-five. Suddenly I see a Porsche 911 with that big spoiler and a Ferrari 250 in front of me. We came up behind them, and in situations like this I can’t control Šemík, he does what he wants. We’re overtaking them at about 85 kilometres an hour, when I see the police with a radar ahead under a bridge. They stared in disbelief and were so amazed that they didn’t react in time to stop us. Šemík saved the two sports cars as well, because they were also speeding and their drivers would have been fined. After a while, they caught up with me on the highway and waved at me, all smiles. I have lots of experiences like that with my car.”

Let’s meet up for his fiftieth birthday!

To finish, Tue Pol Halvorsen tells us about one of his dreams. “One day I met some of the people from the museum in Mladá Boleslav and asked them if there was any way of finding out when exactly Šemík was made. It was during the day shift on 8 November 1976. For a while now I’ve been telling everyone I know that they should get ready for a real party: on 8 November 2026 we’re going to celebrate Šemík’s fiftieth birthday! It’s going to be in the car park in front of the Mladá Boleslav museum and guys from ŠKODA will buy some sausages and beer. The thing is, I haven’t told them that yet,” Tue Pol concludes, laughing. 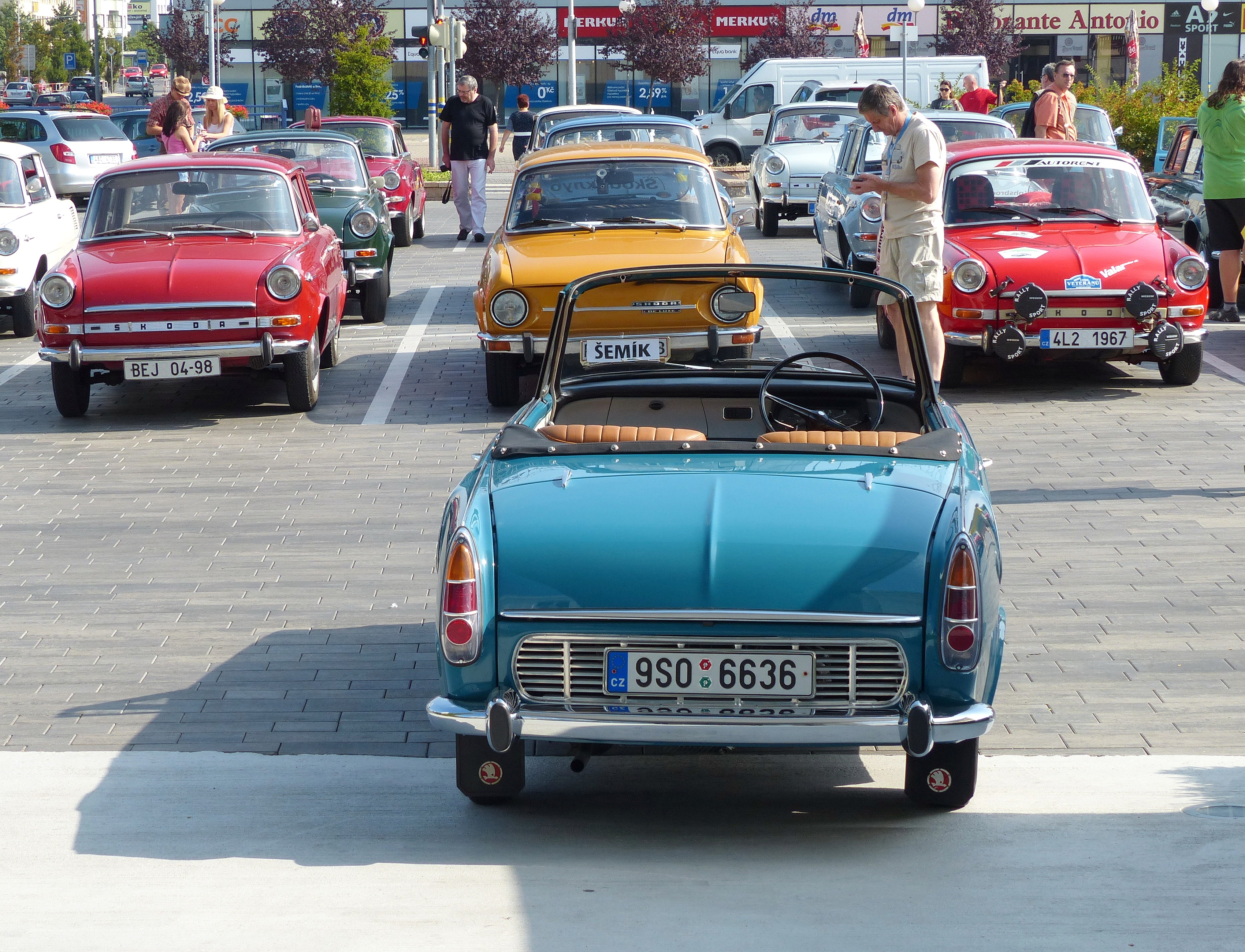 THE INCREDIBLE TRAVELS OF A DANE AND HIS TRUSTY ŠKODA 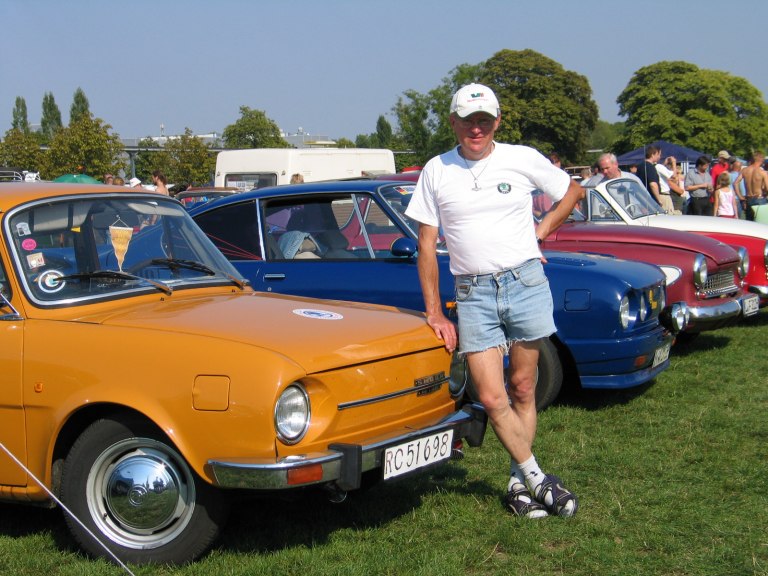 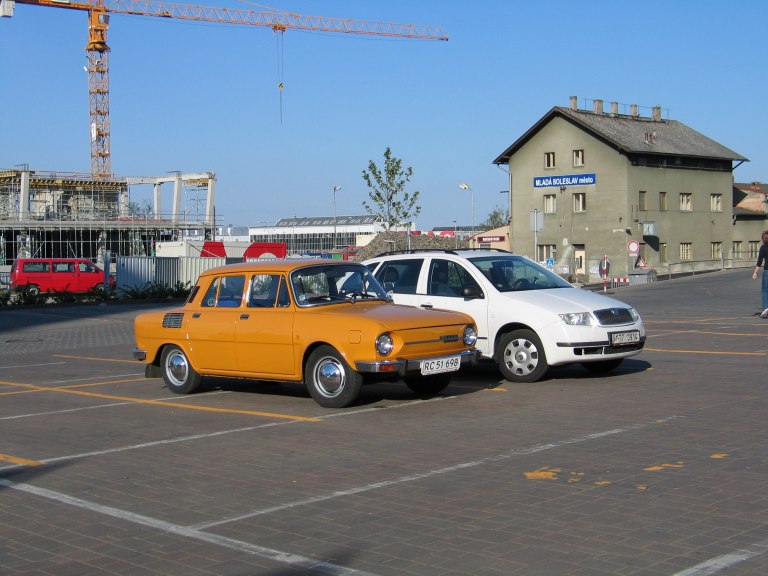 One of his numerous stops in Mladá Boleslav, this time in 2007 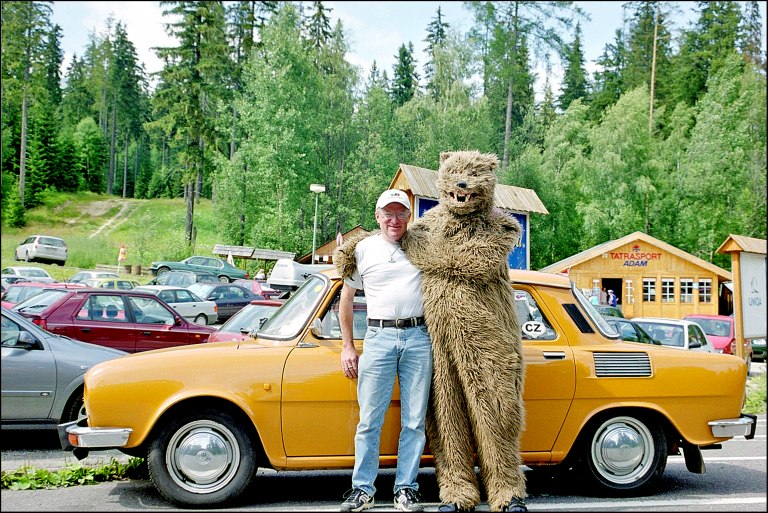 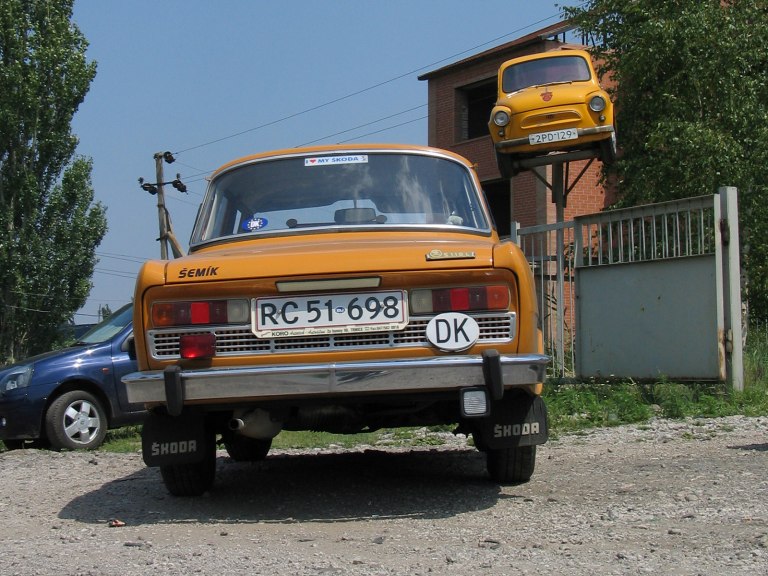 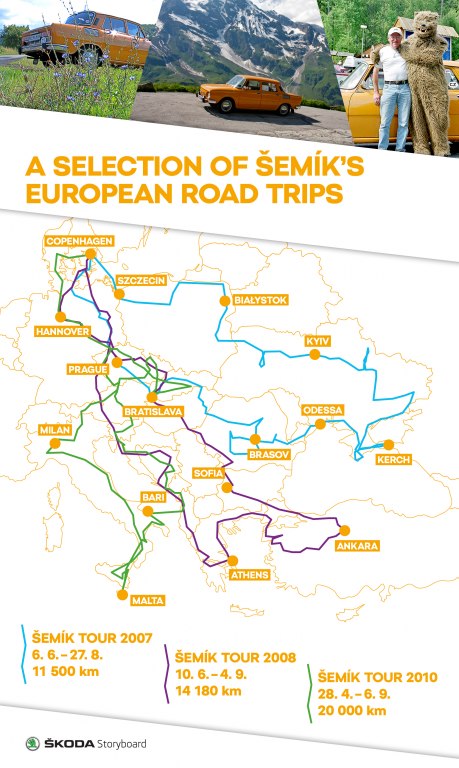 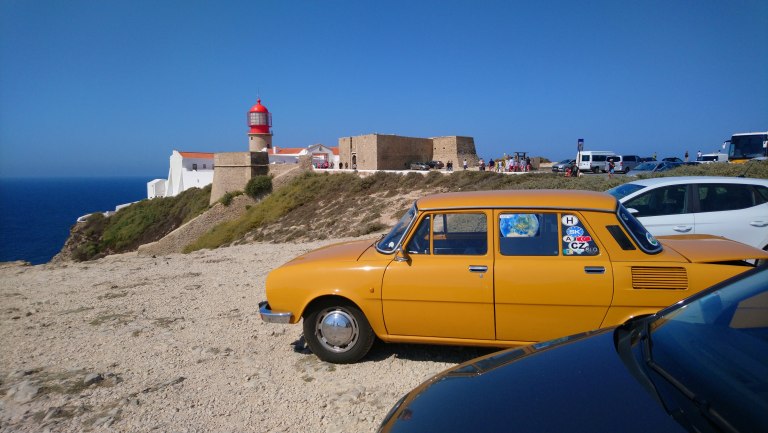 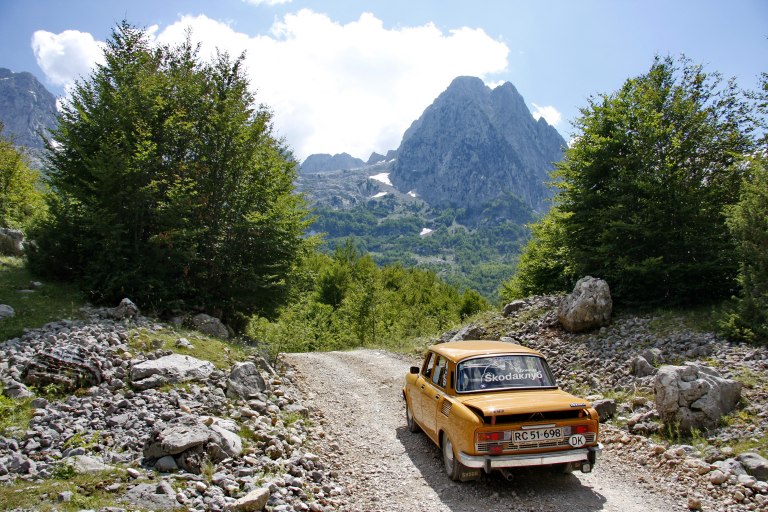 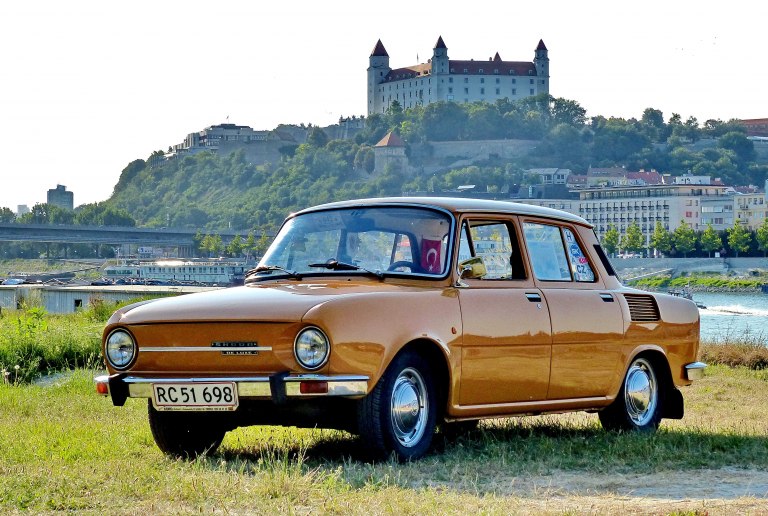 Stop in Bratislava on the way back from Turkey 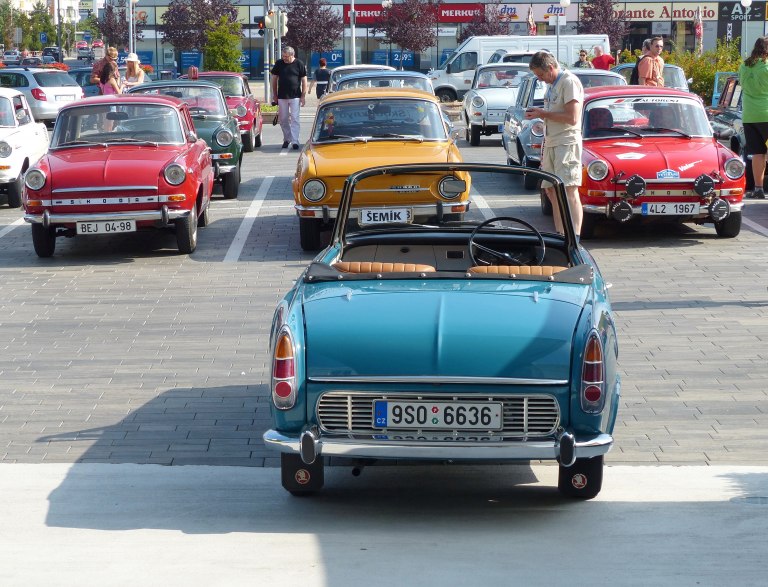