No engine noise, cheap to run and no need for servicing so far. When you have charging sorted out, eMobility is simply fantastic, says the first-ever Czech owner of a ŠKODA ENYAQ iV.

Forty-five-year-old Josef Patočka recently went to fill up his girlfriend’s car. “When I started the cold diesel engine, I was horrified by the noise it made, even though it’s one of the latest engine models. Once you’re used to the silence of an electric car, you never want to go back,” is how the first-ever Czech owner of an all-electric ŠKODA ENYAQ iV begins his story.

Josef is a fan of all-wheel drive; in fact, he’s never owned a car without it. “My parents have a hybrid that only goes a few kilometres on pure electricity. But I liked the idea so much that I started to think more about electric driving – but in a way that meant I wouldn’t be going fifty kilometres per charge, but five hundred. And without an internal combustion engine,” he says, explaining his motivation for getting an electric car. 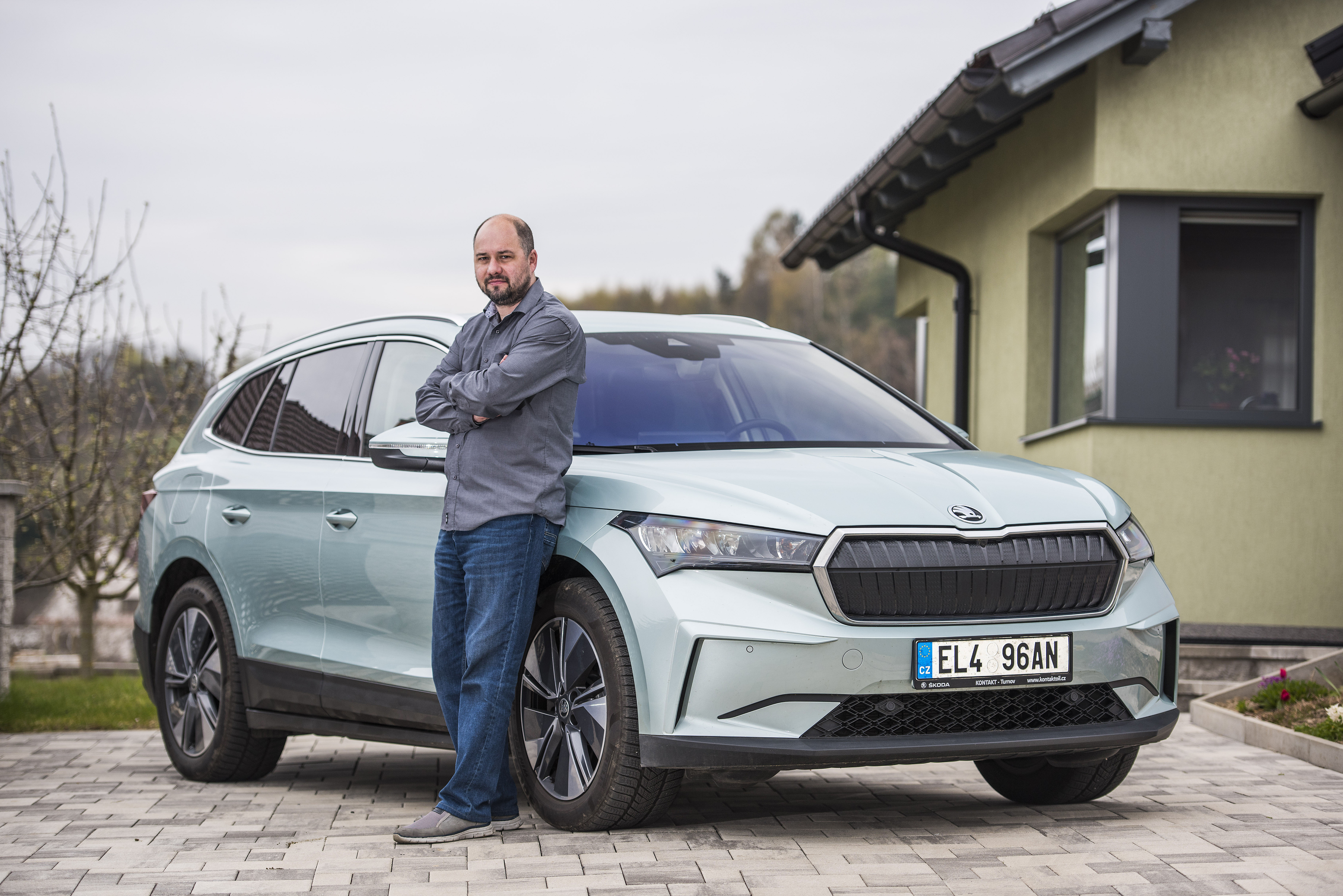 The first ENYAQ iV in Czechia

Josef Patočka and his brother are the third generation running the family business in North Bohemia. He and his girlfriend are raising two daughters in the town of Turnov and his hobbies are cycling and travelling. Including travelling by car. He has owned his ENYAQ iV since the first day the Czech carmaker’s first all-electric SUV went on sale in the Czech Republic – 13 May 2021. 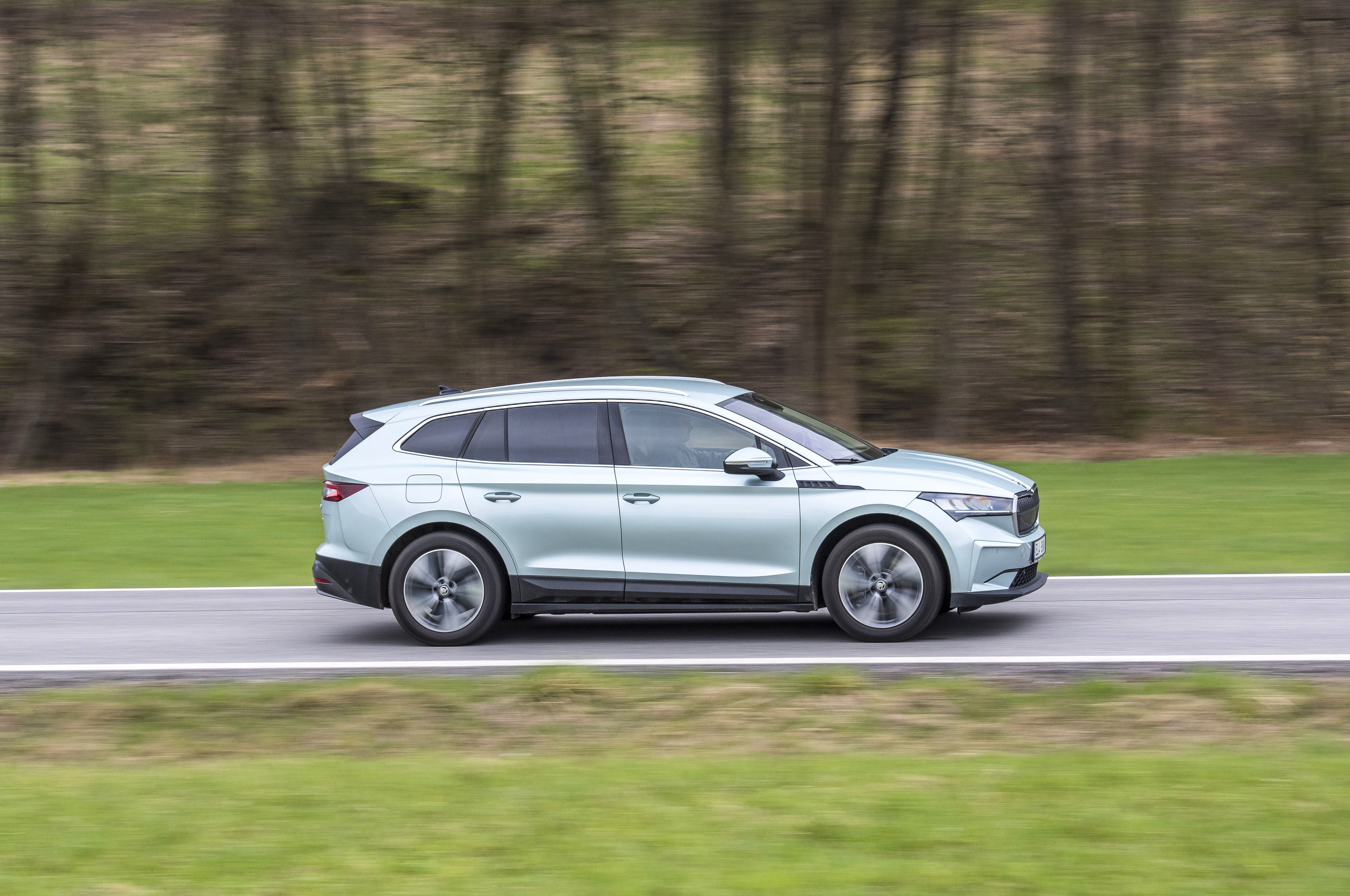 The North Bohemian businessman now drives his electric car to work every day, as well as regular trips to Prague and Brno and other destinations across the country. In his words, the ENYAQ iV is the ideal family car thanks to its dimensions, spaciousness and boot size.

Even in winter time the living is easy with an electric car: five minutes before you set off you can switch on the heating via the mobile app, and by the time you get into the car the windscreen is defrosted and the interior is nice and warm. And the same goes for summer cooling. 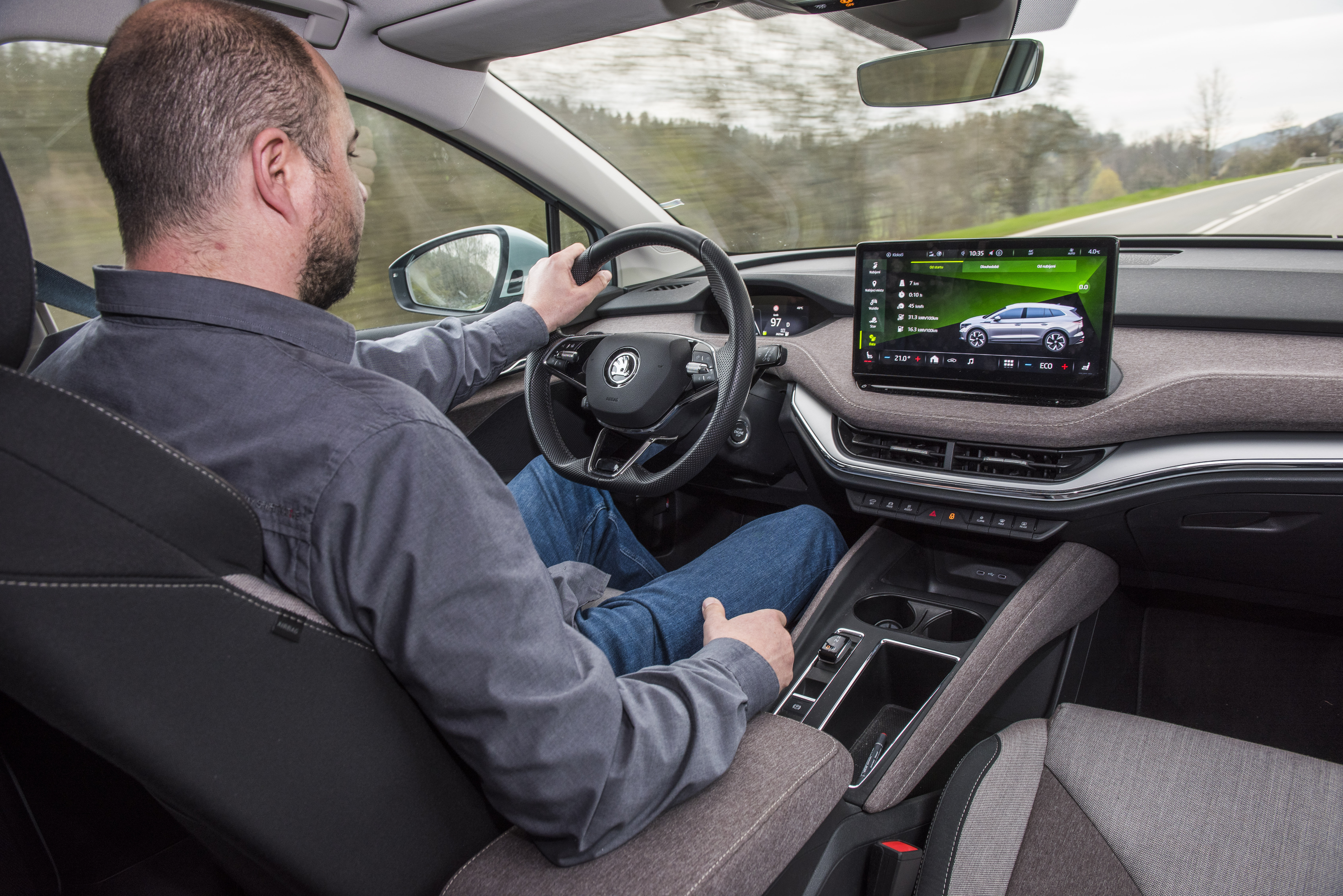 “I charge my car at work mostly. It’s much more convenient than going to a filling station for petrol or diesel. You don’t have to go anywhere, stand by the pump and then pay. Here I just come to work, plug in the cable and forget all about it. When I leave, I have eighty per cent capacity, which is easily enough for 350 to 400 kilometres. I’m usually in the forty to eighty per cent range, which also extends the life of the battery. The car is charged practically all the time, either from home or work. I only use public charging stations on longer trips. And I pay my electricity bill once a year,” he says. 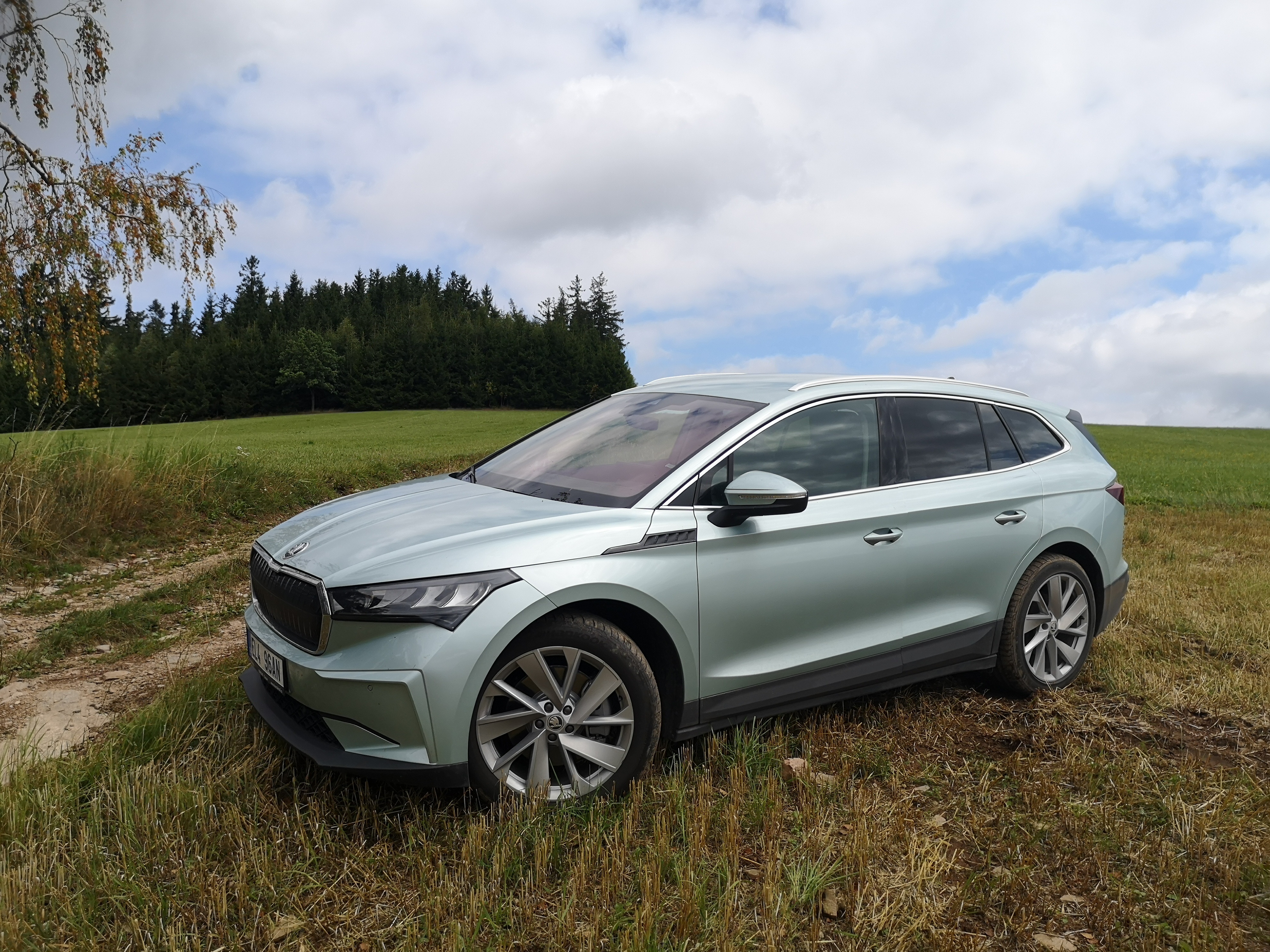 Josef drove the first ten thousand kilometres with an average consumption of 14.9 kWh per hundred kilometres. For the next ten thousand, in autumn and winter, the on-board computer read 20.5 kWh/100 km. He isn’t obsessed with minimising consumption: he’s happy to use full power when overtaking and of course he also uses the air conditioning and heating. In summer, Josef Patočka can drive five hundred kilometres or more on a full battery, even at a relatively brisk pace. In winter, the range is a third to a quarter less.

The satisfied driver has another observation to add on the subject of consumption: “When you’re driving fast on the motorway, consumption obviously increases and the range is reduced. In that sense it’s just like a car with an internal combustion engine, where you burn up seven litres per 100 kilometres on the motorway instead of the usual five. In my case, the car is using about 23 kWh instead of 17 kWh. Heating or air conditioning reduces the range by about a tenth.”

To the top of the world

When the talk turns to how far he has driven his electric SUV, Josef Patočka puts his own spin on it: it wasn’t all that far, but it was very high. He drove all the way to Špindlerova bouda, a chalet hotel in the Krkonoše Mountains, something that would have been almost unthinkable with an electric car just a few years ago. His ENYAQ iV did not suffer from the altitude in the slightest and, thanks to recuperation, it recharged itself nicely on the way back down. 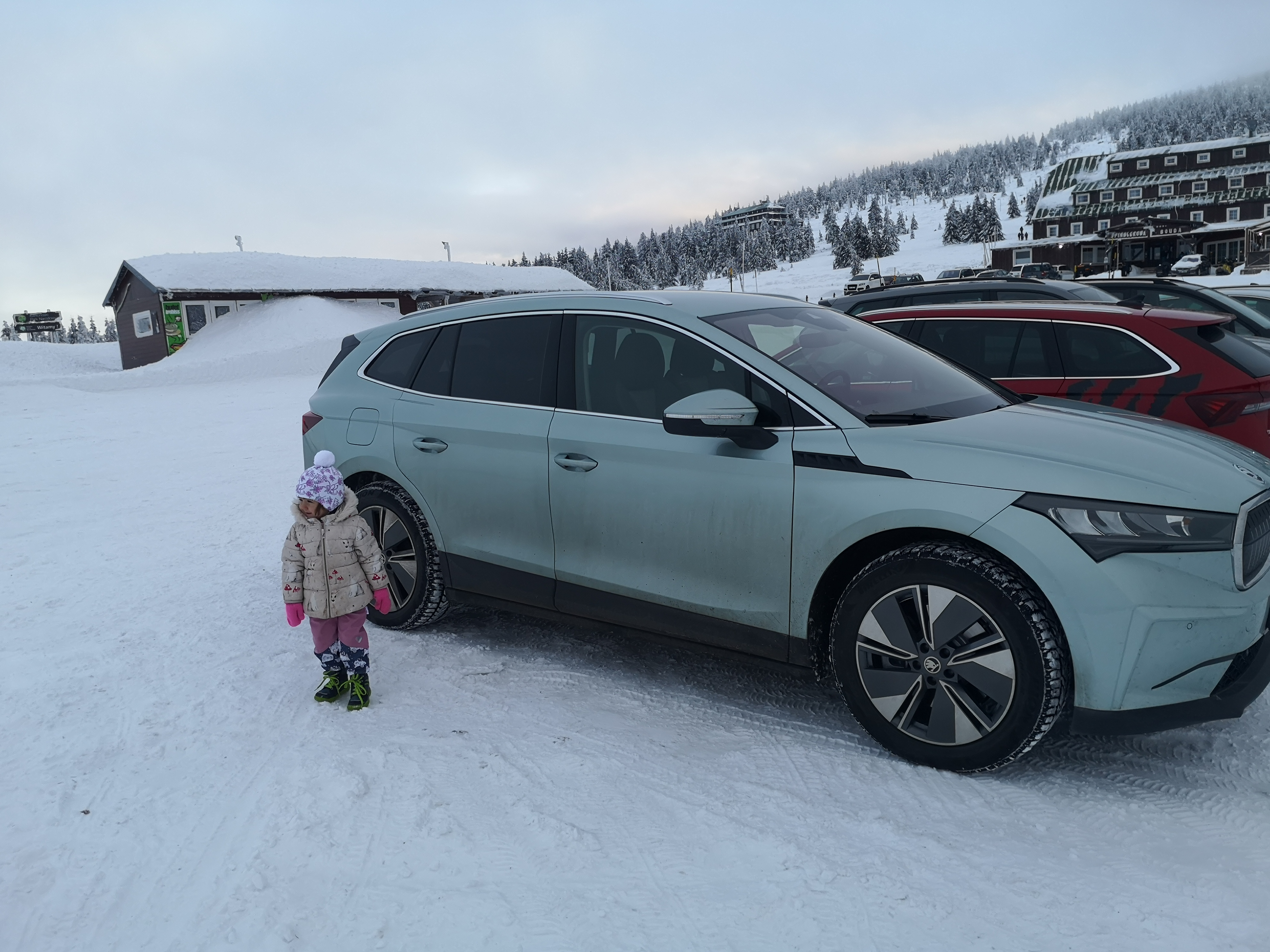 Partly because he has kept the battery charged almost constantly, in a year of electric driving he has not yet been in a situation where he ran out of “juice” on the way. He hasn’t even come close. “On longer journeys, I stop at fifty per cent, say, and go to charge. At 50-kilowatt stations, which are the most common type in Czechia, the charging speed is around one per cent per minute. So after a normal break with a coffee and a snack you have twenty per cent extra and off you go again. This absolutely guarantees that I won’t get into trouble and I’ll make it to another charging station just fine, even if one is busy or out of service. What’s more, my experience so far is that the occupancy rate at the stands is minimal.” 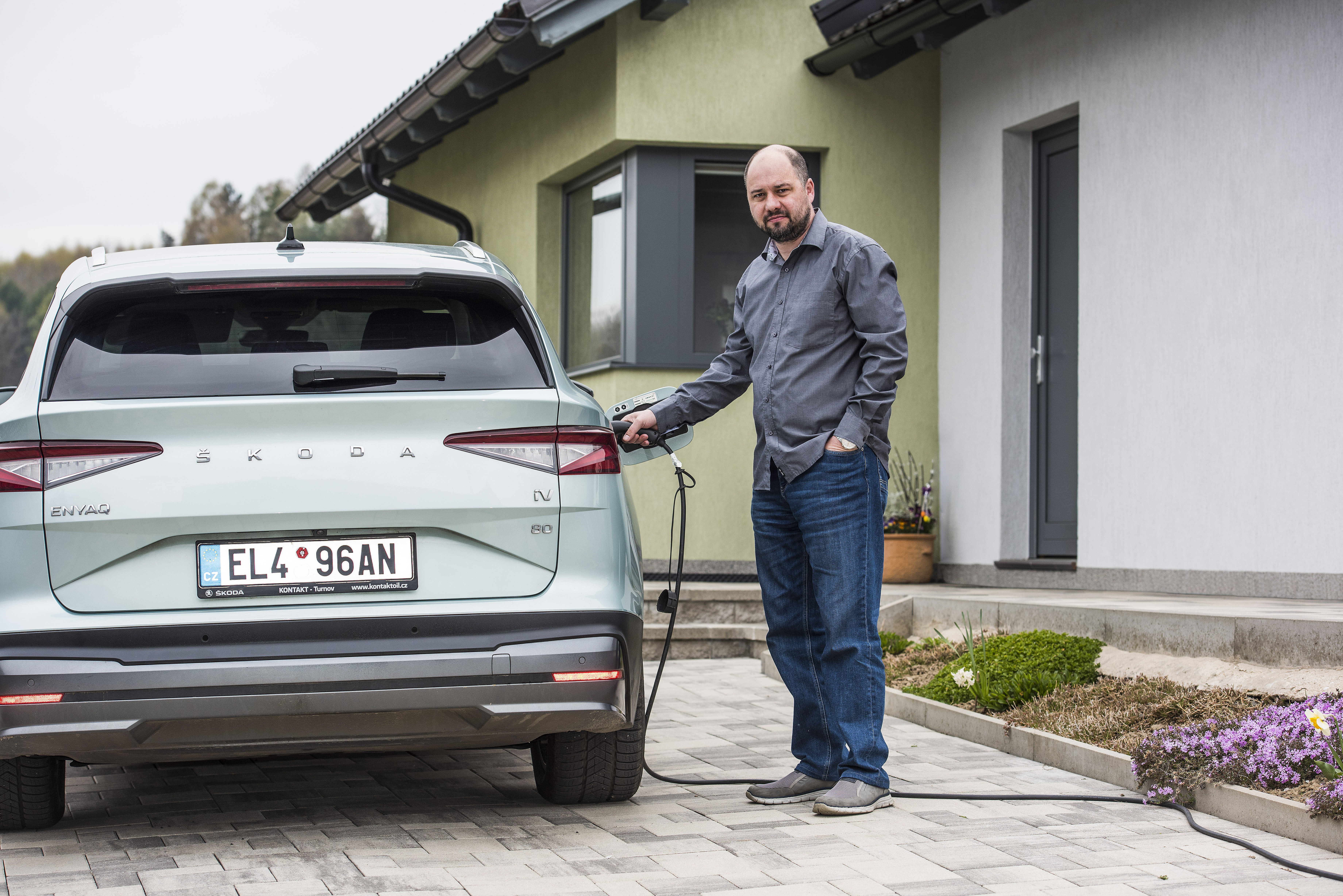 Speaking of charging, Josef Patočka shares his experience of the cost of running an electric car. The prices per kilowatt-hour vary quite a bit, ranging from 16 to 50 euro cents. “In summer the cost works out at about 2 euro cents per kilometre, and in winter 3,” he says.

Although he enjoys the day-to-day experience of living with an electric car, he can imagine that some people might still prefer an internal combustion engine, above all if home charging is a problem. In Josef Patočka’s home town of Turnov, for example, there isn’t a single public charging station. Charging can also be tricky if you’ve got a trailer attached: most stands have to be reversed into.

But for him personally, there are no downsides to the ENYAQ iV. “It’s just so convenient. A lot of people only focus on the range and don’t care or don’t know about the advantages of electric cars. The great thing is that you can “fill up” the car at home, or at work. You can generate the electricity with solar panels, for example. The lack of engine noise and engine vibration is wonderful. When you stop, there’s nothing going on under the bonnet. The throttle response is instantaneous and the acceleration is thrilling. When you put your foot down, you don’t have to wait for the transmission to downshift before the turbo kicks in and the car starts picking up speed. Another advantage would definitely be cheaper servicing: no messing about with oil, timing belts, injectors, filters or AdBlue. But to tell the truth, I haven’t actually experienced that yet, because from what the car tells me it isn’t due for its first service until I’ve done 60,000 kilometres. By that time, a car with an internal combustion engine would already have been in for servicing three times.” No wonder the Czech Republic’s first owner of a ŠKODA ENYAQ iV is smiling.

Next up in My ENYAQ iV series

MY ENYAQ iV: PEOPLE ONLY FOCUS ON THE RANGE OF ELECTRIC CARS 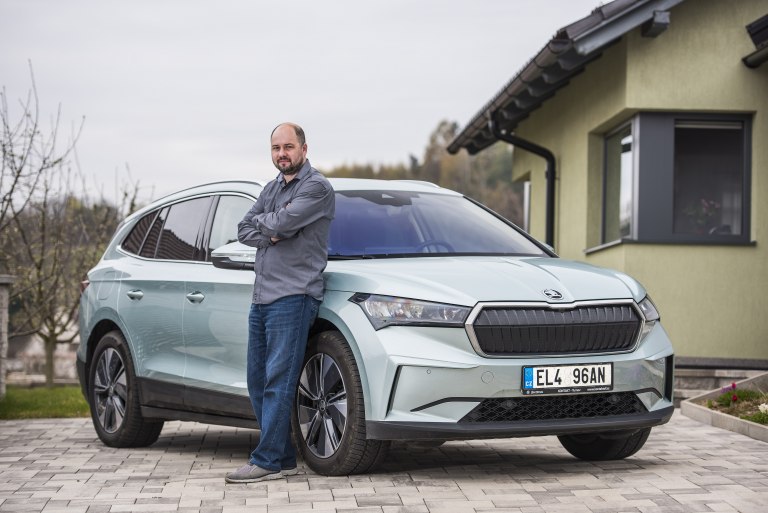 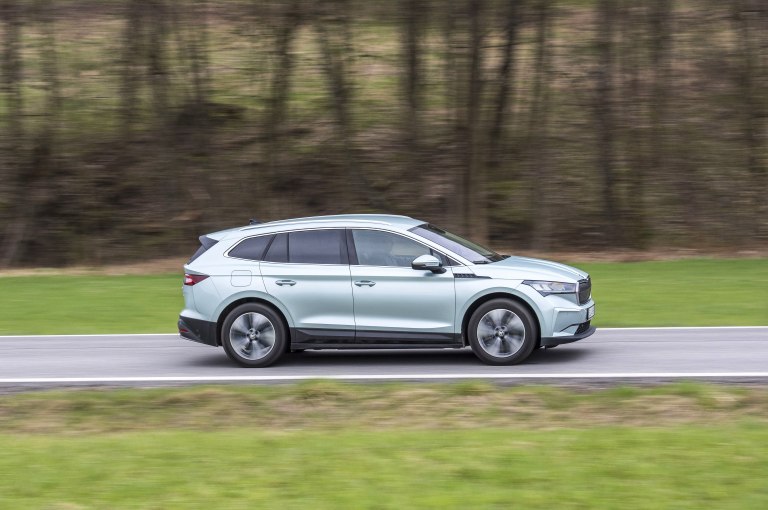 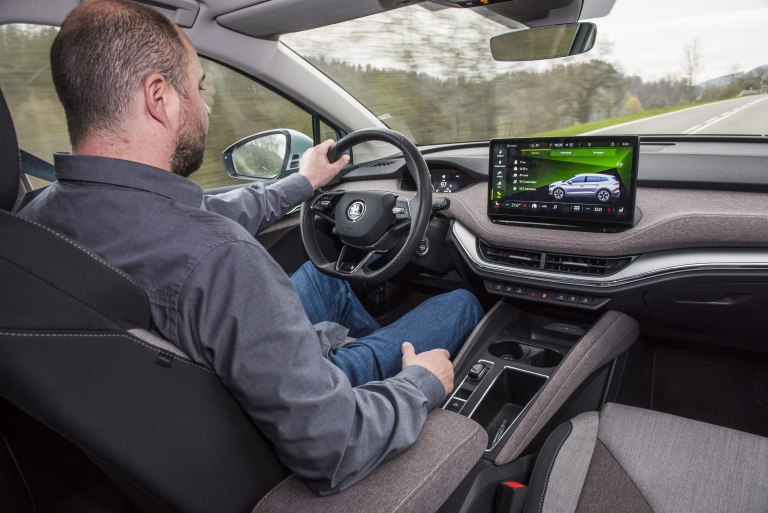 Interior of the ŠKODA ENYAQ iV 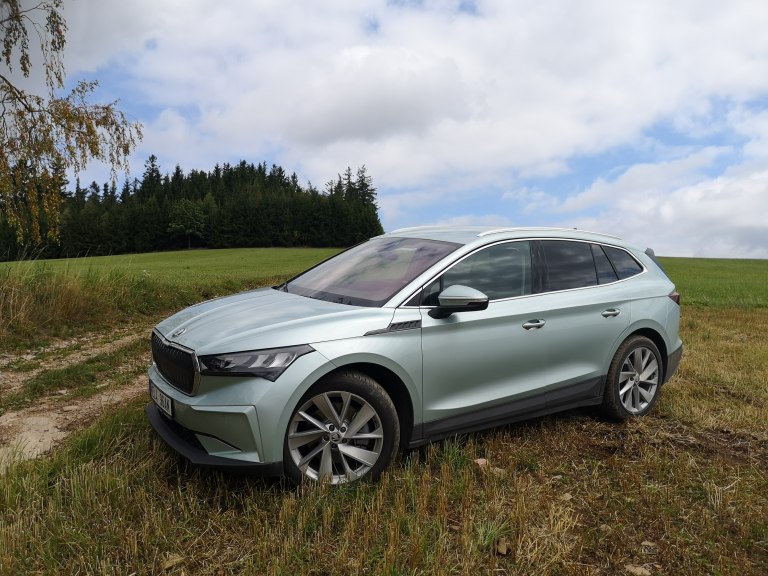 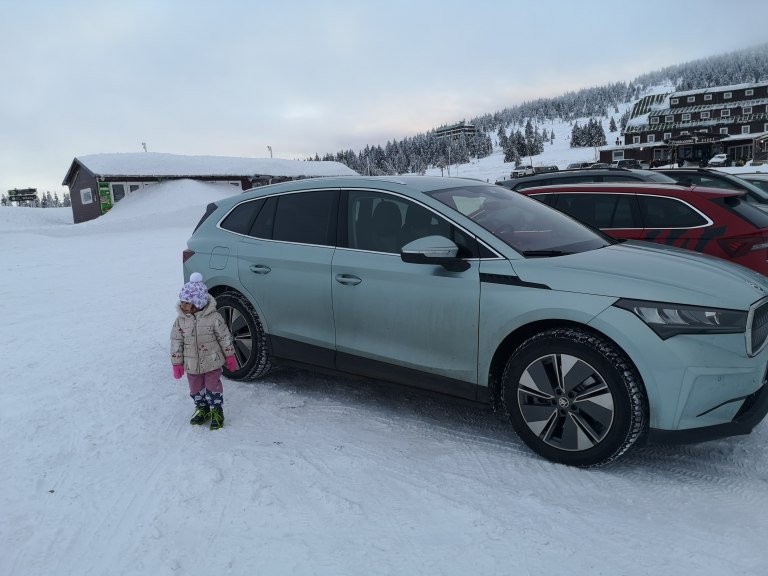 To the top of the world 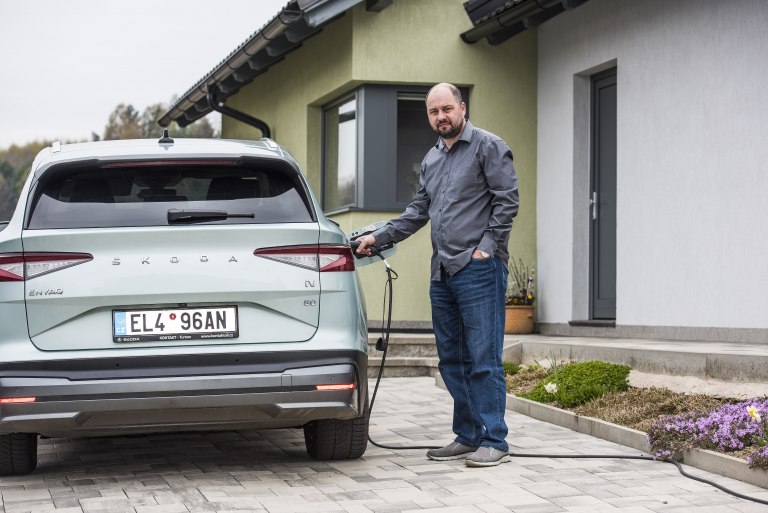