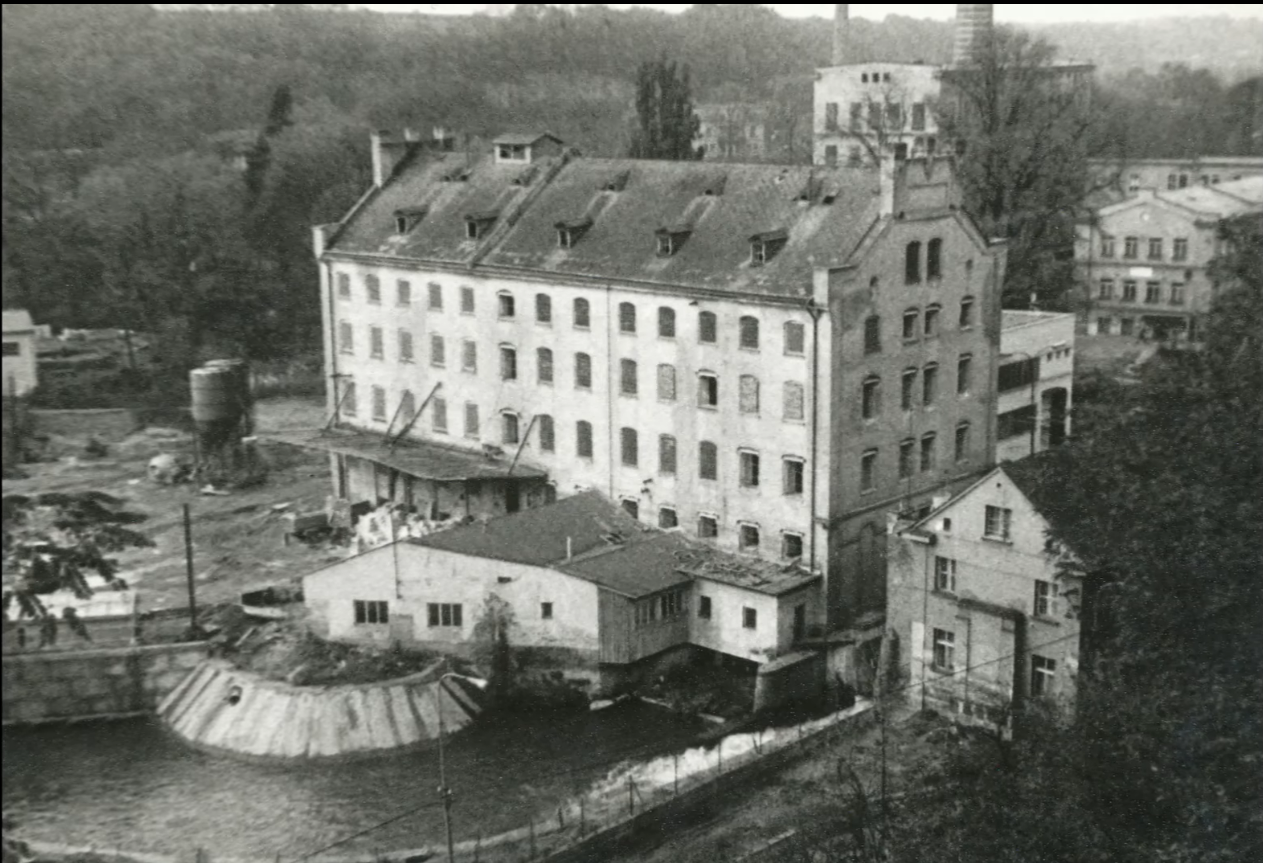 From the 15th century when it was first mentioned in written sources, the mill stood by the Jizera River below Mladá Boleslav Castle, near Ptácká Street today. Podstupenský Mill (‘Mill Under the Steps’) was named after the steps that used to lead to it from the town centre. Structurally, Podstupenský Mill consisted of two mills, one of which was an ordinary mill (the old mill) on the left bank of the millrace with a Bohemian milling assembly. The other (the new mill) was an artistic mill with an American milling assembly that stood on the right bank of the millrace, which branched off from the main watercourse ahead of the big weir and flowed back into the Jizera River again behind the mill under Mladá Boleslav Castle. The ordinary mill consisted of four Bohemian milling assemblies driven by four undershot wheels, with the water wheels coupled in pairs. At the upper mill, the wheels were 4.109 m or 13 Austrian feet in diameter and 0.948 or 3 Austrian feet deep. Two of these wheels were in the water flume, which was the exclusive property of the Mladá Boleslav waterworks. This right was created under a contract dated 15 December 1838 and subsequently entered into the homestead records.

In 1875, the mill became the property of JUDr. Josef Slavík through marriage. As a leading member of the miller’s guild in the region, he was the founder of the still published ‘Mlynářské noviny’ (‘Millers’ Newspaper’) and mayor of the town from 1901 to 1903. Podstupenský Mill was also a family business from 1913, when Slavík’s son-in-law Karel Eger, later founder of the company Suchar, became its owner.

A turbine was installed in the artistic mill, which drove six artistic milling assemblies. A new dual wheel Francis turbine was installed in 1895 and approved by the water management bill for operation in 1896 and 1900. The turbine, which was built in 1895, was replaced in 1914 with a single Francis turbine with an output of 52hp at a gradient of 1.1m and a 4,500l/sec. flow rate. The water management permits for the Podzámecký Mill (‘Mill under the Castle’) further down the river were then transferred to Vaněk’s Mill.

The single Francis turbine from 1914 was replaced by a propeller Kaplan turbine designed for a flow rate of 10,000 l/sec. at a useful work gradient of 2 m (the rough construction gradient was around 2.13 m). This was achieved by connecting the stages of the waterworks of Vaněk’s Mill, Schubert’s Mill (which later closed down) and Podzámecký Mill.

The turbine in the mill is known as a Kaplan turbine, formerly a propeller turbine – its guide wheel resembles a propeller. As a rule, it only has four blades, which can be turned simultaneously with the blades of the guide wheel. The Kaplan turbine runs at up to 90% efficiency at high speed; it reaches up to 1,000 revolutions per minute, which allows for a direct connection to the electric generator. The old energy-inefficient transmission, using wooden cogwheels or steel gearwheels, was eliminated. The modern and still commonly used Kaplan turbine enabled the highly efficient utilisation of waterpower – ‘white coal’ on a large scale, thus contributing to efficient energy management. Throughout its several centuries of existence, Vaněk’s Mill was successively fitted with all the important water engines – the undershot wheel, Francis turbines and finally the Kaplan turbine – which is a worthy reminder of old Vaněk’s Mill and its glory years, when it reached its peak in terms of size, scale and grain milling performance.