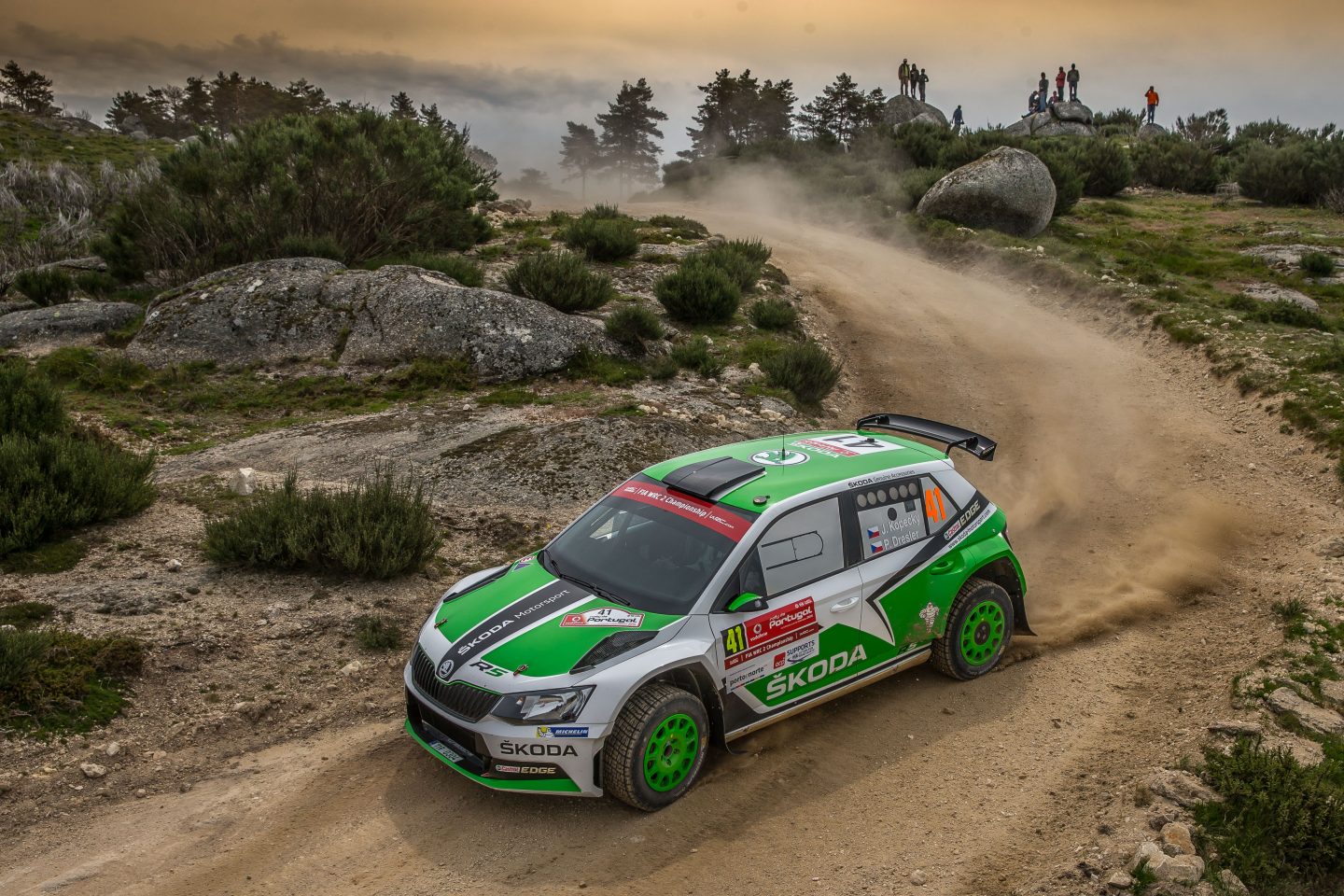 › ŠKODA duos Jan Kopecký/Pavel Dresler and Esapekka Lappi/Janne Ferm in action at the Rally Italy in the FIA World Rally Championship (WRC 2)
› Three podium positions in two starts by ŠKODA Motorsport with the FABIA R5 in the WRC 2 in 2016 to date
› Michal Hrabánek: "Maximum performance is required from the team"

Mladá Boleslav, 6 June 2016 – High jumps, hard tracks: ŠKODA Motorsport are eager to continue their run of success at the Rally Italy on Sardinia (9 to 12 June). The works team will be represented by the experienced duos Jan Kopecký/Pavel Dresler (CZ/CZ) and Esapekka Lappi/Janne Ferm (FIN/FIN) at the third appearance in the FIA World Rally Championship (WRC 2) in 2016. Kopecký has already picked up two wins in two starts in the Czech Rally Championship (MČR). And at the World Championship event in Portugal two weeks ago, the third works team with Pontus Tidemand/Jonas Andersson (S/S) triumphed with the ŠKODA FABIA R5 in the WRC 2 category.

“The Rally Italy is one of the most difficult challenges on the World Rally Championship calendar,” said ŠKODA Motorsport Director Michal Hrabánek. “Maximum performance is required from the team.” Almost 325 kilometres over 19 stages are scheduled from Thursday to Sunday. The highlight is the legendary “Micky’s Jump”. It isn’t the longest, but it is the highest jump that the rally cars have to master in the entire World Championship season. The mostly rock-hard surface also makes the tracks on the Mediterranean island a tough test for the cars.

“Our driver duos also need to be fully focussed every second that they are on the narrow gravel tracks on Sardinia. Every mistake is punished,” warned Hrabánek. Jan Kopecký made it onto the WRC 2 podium in third place on Sardinia last year. The 34-year-old is eager to build on this performance at this year’s edition. “After my win at the Rally Český Krumlov, I need to adapt from the asphalt tracks in my home country to the gravel surface on Sardinia as quickly as possible. Last year showed that it takes strong nerves and controlled risks here,” said Kopecký.

Esapekka Lappi lost more than half an hour at the endurance test on Sardinia last year after a coming together with a stone, but won seven special stages to fight his way back up into ninth place. “The motto is: Drive quickly and don’t make any mistakes. Our aim is definitely to be battling for the win,” said Lappi. The “flying” Finn, like Jan Kopecký, will make his second appearance of the year in the WRC 2. On his first outing at the Rally Sweden, Lappi finished in third place behind his team-mate Pontus Tidemand.

Then came three wins in a row in the FIA World Rally Championship (WRC 2) for the ŠKODA FABIA R5. In the speedy, reliable four-wheel drive from Mladá Boleslav, the Finn Teemu Suninen was victorious at the Rally Mexico, while Nicolás Fuchs from Peru was unbeatable at the Rally Argentina. The works team didn’t contest either of the two rounds overseas, but clinched the hat-trick of wins for the ŠKODA FABIA R5 at the Rally Portugal with Pontus Tidemand. The next chapter of the success story is set to be added on Sardinia.

… there are a total of eight ŠKODA FABIA R5 on the entry list of the WRC 2 category for the Rally Italy on Sardinia? In addition to the two works drivers Jan Kopecký and Esapekka Lappi, the ŠKODA customers Teemu Suninen, Nicolás Fuchs, Armin Kremer (D), Julien Maurin (F), as well as the Italians Umberto Scandola and Luca Hoelbling rely on ŠKODA’S powerful machine.

… ŠKODA is also a major player in the overall standings of the WRC 2 after five of the 14 rounds of the season? Behind the leading Brit Elfyn Evans (62 points), Nicolás Fuchs (55), works driver Pontus Tidemand (S/43), Hubert Ptaszek (PL/42), Armin Kremer (28) and Teemu Suninen (25) make it five drivers in the following positions who picked up their points in the FABIA R5. Works driver Esapekka Lappi is in eleventh place with 15 points – but he has only contested one rally so far. Each driver can pick up points for the WRC 2 overall standings in seven selected rallies during the course of the year.

… ŠKODA Motorsport is already in second place in the WRC 2 team standings? Even though the team has only contested two WRC rallies to date, they have already picked up 43 points. Only M-Sport with 73 points from four rallies is currently better.

… the rally will get underway with a new highlight on Thursday evening this time? The 2.00-kilometre special stage Ittiri Arena Show in Alghero replaces last year’s opening stage in Cagliari. Also new: The special stages Tula on Friday and Sassari – Argentiera on Sunday.

… the absolute highlight is without a doubt the legendary “Micky’s Jump”? This will have to be mastered on the special stage Monte Lerno – at 44.26 kilometres the longest stage of the rally – which will be completed twice on Saturday. The rally cars fly up to 40 metres through the air on “Micky’s Jump”.

… the reigning World Rally Champion and current WRC front-runner Sébastien Ogier (F) made rally history in a ŠKODA here in 2012? He finished in fifth place overall in the FABIA SUPER 2000 on Sardinia, which no other driver has managed in an S2000-class car to date. However, even more impressive was the stage “Tergu-Osilo 1”, on which the Frenchman achieved something historic: He got the best time – leaving all of the World Rally Car elite in his wake. In 2012, Volkswagen used the ŠKODA FABIA SUPER 2000 to prepare for entering the FIA World Rally Championship. Where Volkswagen have been the measure of all things since entering the competition: The team picked up the titles in the drivers’, co-drivers’ and manufacturers’ standings of the WRC in 2013, 2014 and 2015. And Volkswagen leads all of the WRC standings again this year.

… the Rally Italy has only been held on Sardinia since 2004? Before that, Italy’s WRC event had been held around Sanremo since the world championship was introduced in 1973. The Rally Italy’s service park on Sardinia is located on the west coast of the island, in Alghero, for the third year in a row.

… ŠKODA has already won the “Rally Italia Sardegna” once? The Finn Juho Hänninen won in the Fabia Super 2000 in 2010. Back then, the rally was part of the Intercontinental Rally Challenge (IRC) as a one-off. Hänninen won the title at the end of the season, ahead of his fellow ŠKODA driver Jan Kopecký. 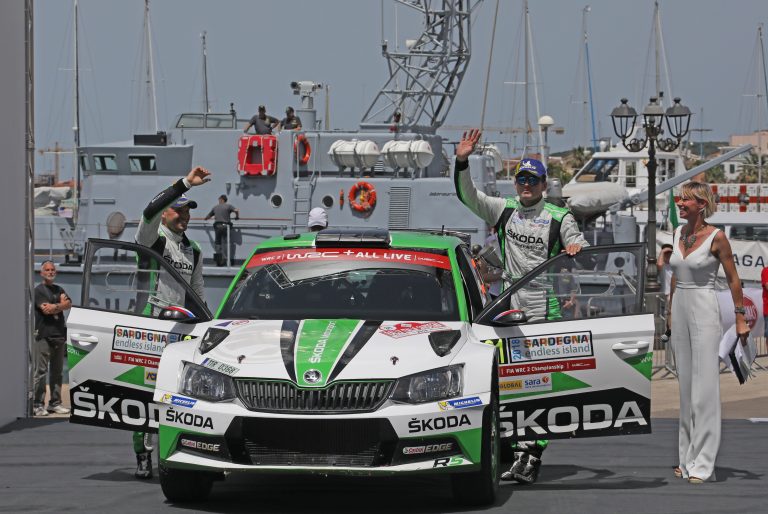