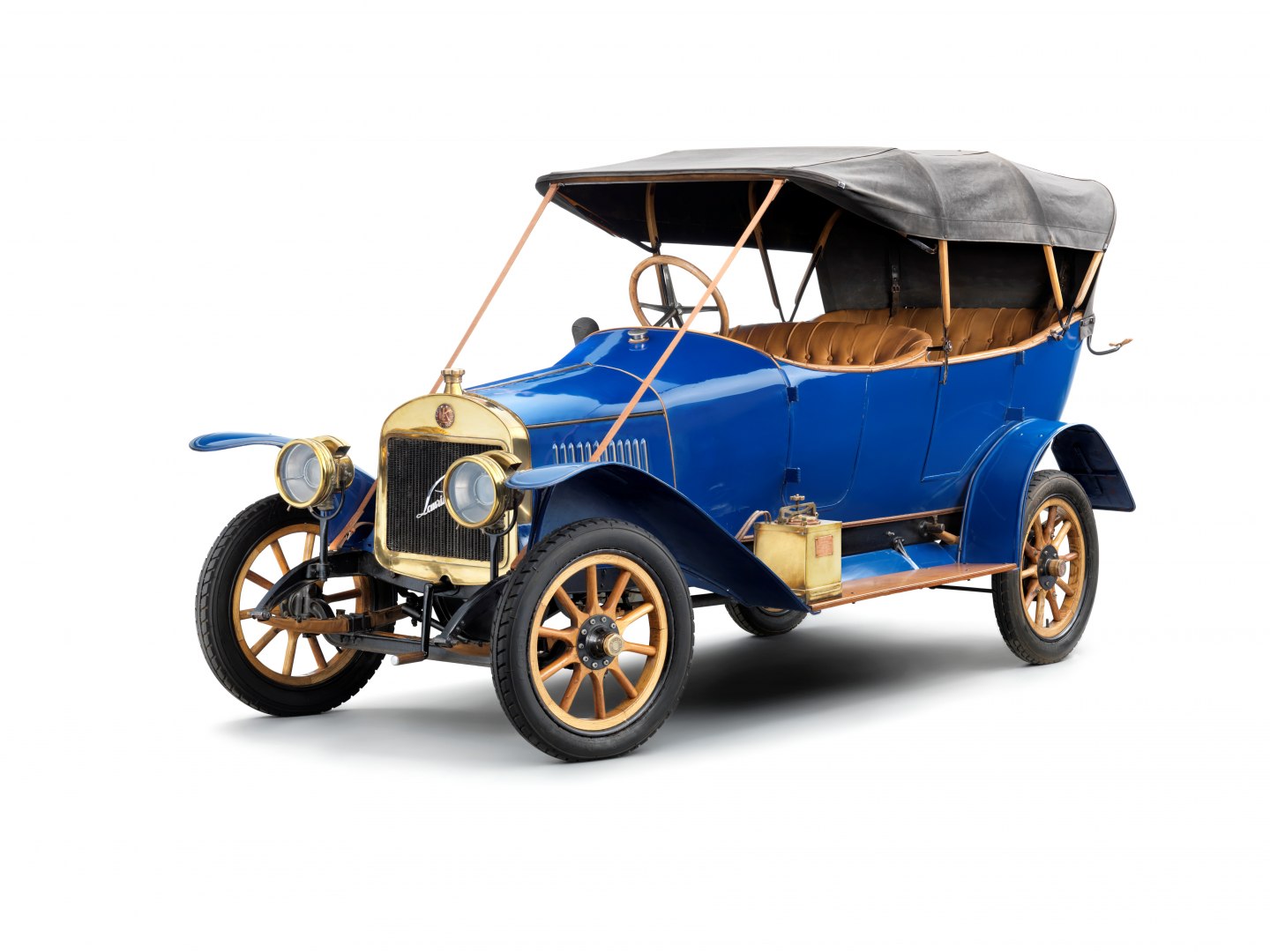 › Laurin & Klement presented its best-selling model, the S series, on 16 April 1911
› More than 2000 units had been built by 1924 in numerous versions, including the Lady coupé and the Kavalier ‘double saloon’
› Laurin & Klement’s vehicles also appealed to international customers, finding buyers as far afield as the British and Russian Empires
› The S series performed well in the most demanding races and competitions, finishing 6th overall in the 1914 Targa Florio, for example

Mladá Boleslav, 16 April 2021 – High-volume models with an attractive price-performance ratio are an integral part of ŠKODA AUTO’s brand identity. 110 years ago, Laurin & Klement presented the S series, which quickly became the bestseller of the fledgling company from Mladá Boleslav. By 1924, more than 2,000 customers from Europe and overseas had chosen their dream vehicle from the wide range of open and closed body variants. There were several versions of the robust chassis, and the four-cylinder petrol engines with a displacement of up to 2,413 cm3 generated 30 hp (22.1 kW) at this stage of development.

The car manufacturer Laurin & Klement enjoyed economic and sporting success with bicycles immediately after it was founded in 1895. From 1899 onwards, the product range was expanded to include motorbikes before the company presented its first automobile in the autumn of 1905 – the Laurin & Klement Voiturette A. In addition to its high utility value, the vehicle also had a particularly attractive price-performance ratio and low fuel consumption. In 1908, 90 per cent of all automobiles in the voiturette segment manufactured during the dual monarchy of Austria-Hungary were made by Laurin & Klement.

The range quickly grew with the addition of models in higher vehicle classes, and the number of units produced in the individual model series soon numbered in the dozens or even hundreds.

By the First World War, the Laurin & Klement company had become the largest car manufacturer in the Austro-Hungarian Empire, where more than 50 million people lived at the time. A significant proportion of the vehicles produced in Mladá Boleslav went to foreign customers on all continents.

The gates of the exhibition grounds in the Prague district of Holešovice opened 110 years ago on Sunday, 16 April 1911. The popular motor show was dominated by Laurin & Klement’s stand. In addition to commercial vehicles with payloads of up to 10 tonnes and buses seating 26 passengers, visitors were particularly interested in new passenger car models. The S series, the manufacturer’s new basic model, also made its debut there.

The additional designation 12/14 HP resulted from 12 ‘tax horsepower’, a value calculated for tax purposes according to an officially defined formula, as well as from the actual output of 14 hp (10.3 kW). This was produced by a water-cooled four-cylinder petrol engine with a displacement of 1,771 cm3 and side valves. The engine, with a flywheel positioned at the front, closely behind the radiator, formed a single unit with the clutch and the three-speed gearbox. This meant that only one oil level had to be checked and changed. In addition, the car manufacturer installed a special lubricator made by Friedmann, which served as an oil pump and oil reservoir. It ensured the supply of oil, thus increasing the service life of the mechanical assemblies. The Eisenmann magneto-electric system was used for the ignition.

A robust ladder frame made of U-shaped steel profiles riveted together formed the basis of the L&K S. The rigid axles at the front and rear were each suspended with two longitudinally mounted leaf springs. The pedal-operated main service brake acted on the cardan shaft behind the gearbox, while the drum brakes on the rear wheels were connected to the handbrake lever. The standard equipment included special spoked wheels, the steel rim of which was firmly bolted to a wooden hub cap. This made it easier to repair the 710 x 90 mm tyres when they were damaged, which was a common occurrence at the time. For an additional charge, the manufacturer also offered wire-spoke wheels, followed by full steel rims from Michelin after the First World War. The complete road-ready chassis of the Model S with a wheelbase of 2,688 mm weighed 650 to 700 kg.

Wide range of variants to meet all requirements
The Laurin & Klement S reached a top speed of 50 to 60 km/h, depending on whether it was completed with a light commercial vehicle body or passenger car body. The basic versions could be adapted to the specific needs of each customer. At first, the open-top models with two or four seats were most in demand, but later the range was expanded to include other versions, such as the ‘Vienna’ landaulet, the ‘Karlovy Vary’ saloon, the ‘Kavalier’ double saloon and the ‘Lady’ or ‘Doctor’ coupés, each with a specific ladies’ or gents’ interior. The light commercial vehicle derivatives included the ‘Fortschritt’ platform truck and the ‘Express’ luggage carrier.

Customer demand continued to rise, not least because of the regular modernisation of the Laurin & Klement S vehicles. Each stage of development was denoted by a type designation with a subsequent letter from Sa to So. The designations complemented each other, and there were overlaps in the production periods. Over time, the wheelbase grew in numerous steps from the original 2,688 millimetres to 3,220 millimetres. The basic configuration of the in-line four-cylinder engines was retained; however, the displacement increased from 1,771 cm3 to 2,413 cm3 over several stages. In turn, the power output increased from 14 hp (10.3 kW) to 30 hp (22.1 kW). In addition, the three-speed gearbox was replaced by a four-speed transmission to enhance the dynamic characteristics of the S-series vehicles. A modern electric starter became available from 1918 – initially only at the customer’s request – although it was still possible to crank the engine as before. Due to the larger displacement and the higher compression ratio, however, cranking was very strenuous. The original acetylene lights with carbide gas generators were replaced at the beginning of the 1920s by electric light bulbs, which were much easier to operate.

During the 14 years that the Laurin & Klement S models were built, the car manufacturer achieved numerous motor racing successes with the series. Among the most noteworthy are the victories in the Trieste – Opicina and Troppau – Moravian Ostrava races (1911) as well as the Grand Gold Medal at the race in Parma, Italy (1913), 6th place in the overall standings at the challenging Sicilian mountain race Targa Florio (1914) and the special prize awarded by the Chairman of the Czechoslovak Automobile Club Prof. Otakar Kukula for the ‘L&K Se’ model in the 2,000-kilometre reliability race of 1921. In the same competition, the larger ‘L&K So’ model was awarded the silver plaque. In addition, the cars drove to victories in the Zbraslav – Jíloviště and Ecce Homo hill climbs as well as in the Schöber race (1922).

Tradition of volume models from Mladá Boleslav
After more than 2,000 vehicles of the S series had been produced, the Laurin & Klement / ŠKODA 110 model became the best-selling model of the Mladá Boleslav-based manufacturer; a total of 2,985 units were produced between 1925 and 1929. These were the last cars to be developed in the Laurin & Klement era, though they already bore the ŠKODA logo.

The tradition of affordable volume models, which began 110 years ago with the Laurin & Klement S series, continued after ŠKODA entered as a strong strategic partner. The ŠKODA 422 was the brand’s first vehicle to be produced on an assembly line using efficient production methods and was available from the spring of 1930 at a starting price of 33,000 crowns. The average annual salary of a civil servant at that time was 18,000 crowns. Between 1930 and 1932, 3,466 customers opted for the Š 422. In March 1934, the Baťa company took delivery of the first model of a completely new generation of cars from Mladá Boleslav – the ŠKODA POPULAR. The model was the answer to the economic crisis at the time. The POPULAR’s technical innovations included its central tubular frame and independent suspension. The price of the vehicle, which was also in high demand abroad, started at just 17,800 crowns. This was one of the reasons the car won over more than 22,500 customers between 1934 and 1947. Other milestones in the Czech automaker’s history include the introduction of rear-engined vehicles (1964: ŠKODA 1000 MB), and transversely mounted front engine and drivetrain (1987: ŠKODA FAVORIT). In 2020, ŠKODA presented the ENYAQ iV, the first series-production model based on the Volkswagen Group’s MEB platform for battery-electric vehicles. 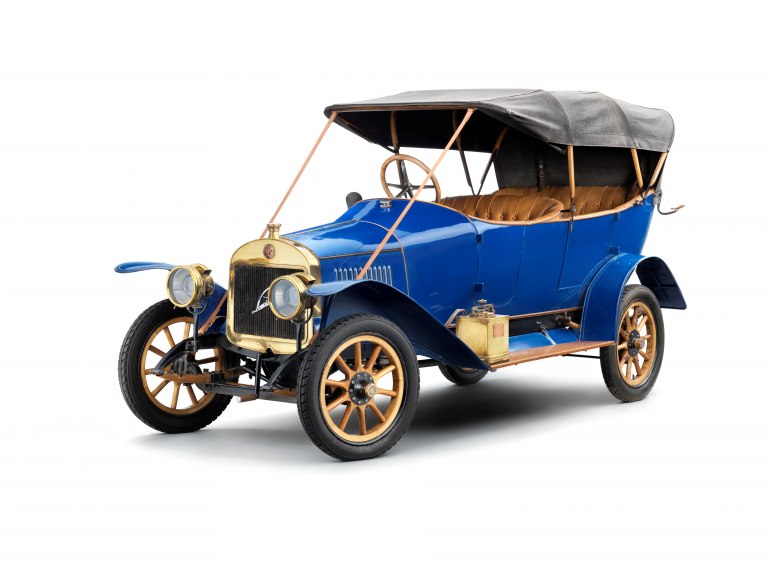 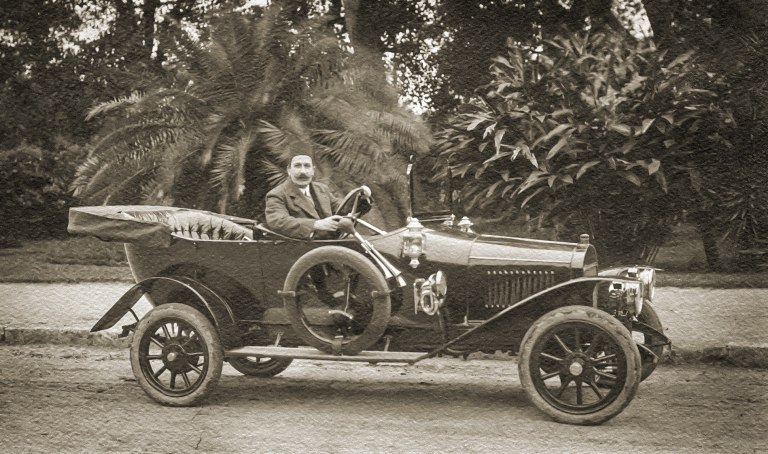 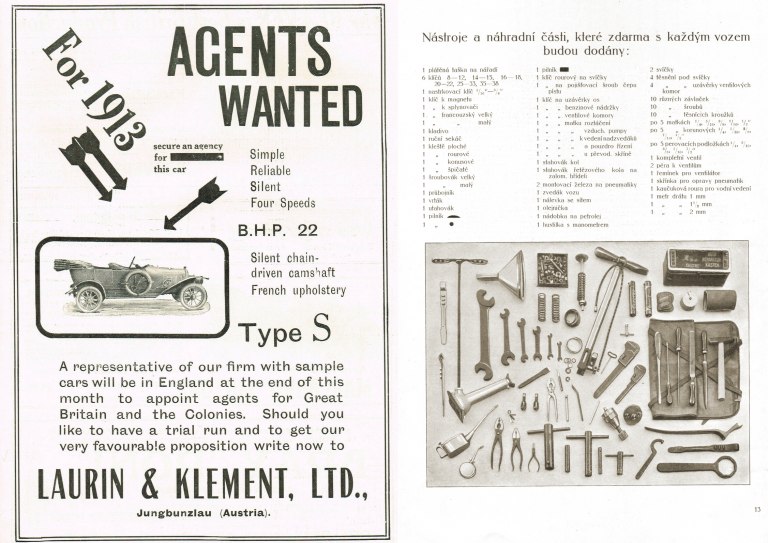 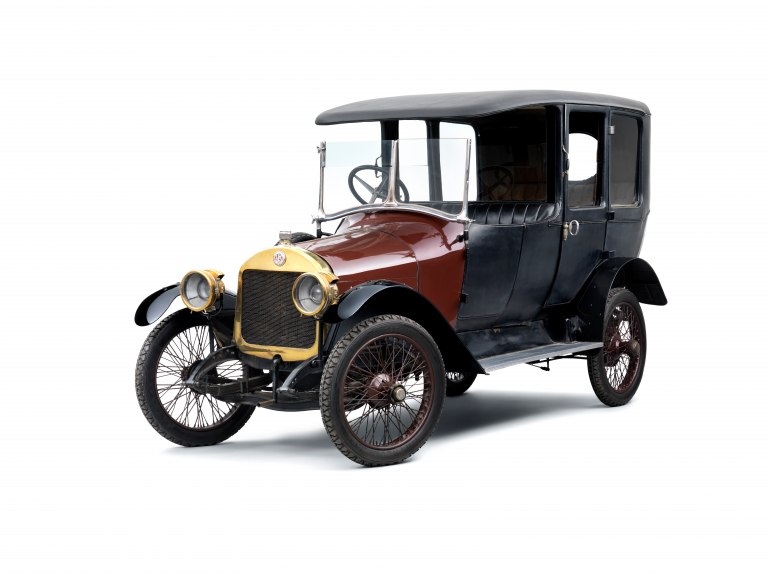 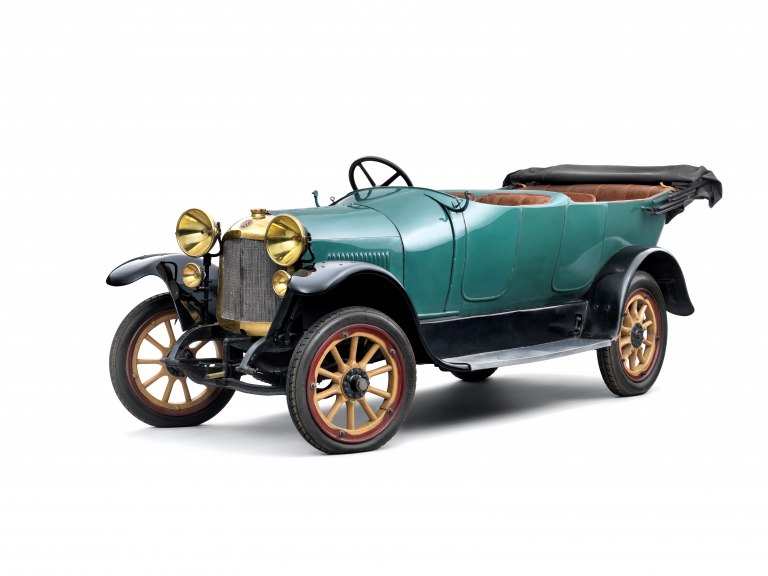 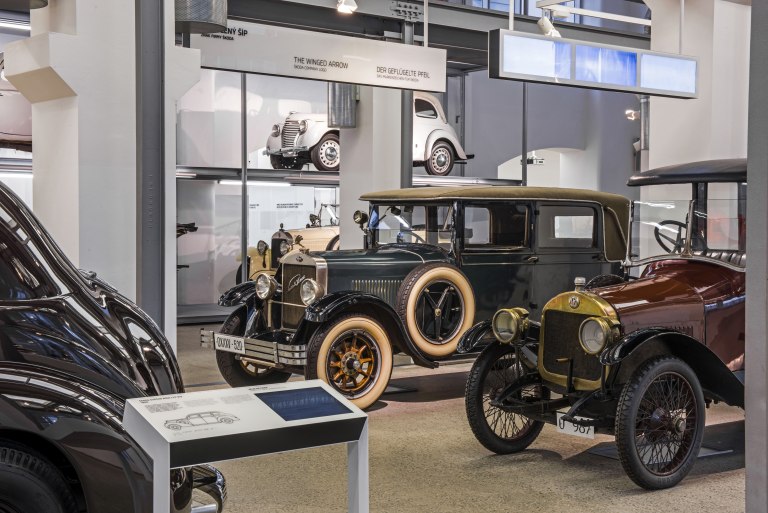 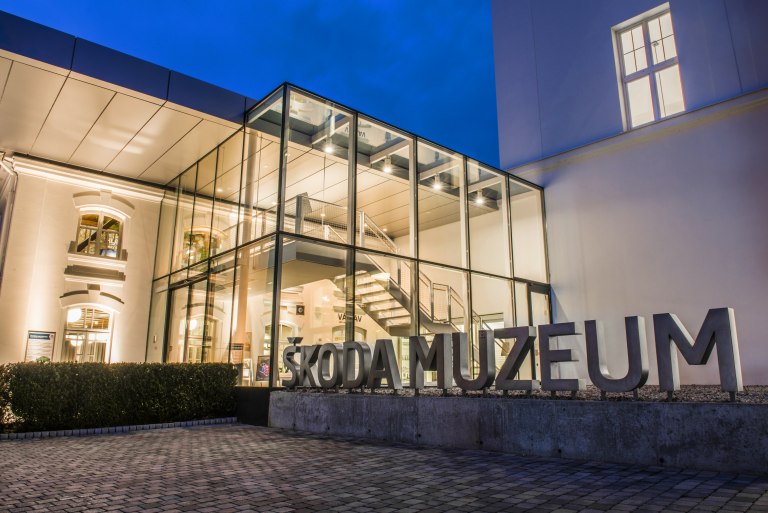