Mladá Boleslav, 23 January 2019 – For more than 45 years, the RS letter combination has “electrified” fans of ŠKODA performance models. The abbreviation RS stands for “Rally Sport”. In addition to its association with successful race cars such as the legendary ŠKODA 130 RS, it has graced the sportiest versions of the Czech car maker’s production models since the year 2000. Now, the fourth-generation ŠKODA OCTAVIA is all set to add a new chapter to the distinguished RS history, with a first plug-in hybrid powertrain – twenty years after the debut of the first OCTAVIA RS.

For over 45 years, ŠKODA has enjoyed success on rally routes and race tracks courtesy of its RS family, which over the past couple of decades has also been adding a touch of sensible sportiness to the road via the RS production models. The history of the RS letter combination goes back to 1974, when the manufacturer first used it as a shorthand for “Rally Sport” in the model designations of the ŠKODA 180 RS and 200 RS rally prototypes built at the time. Since then, and in no small part due to the considerable achievements of the ŠKODA 130 RS in the 70s and 80s, this dynamic acronym has achieved legendary status and become synonymous with motor racing. Since the year 2000, RS production models – consistently designed for outstanding performance – have added to this success story, with a model range that has comprised OCTAVIA RS, FABIA RS and KODIAQ RS variants.

Milestone: ŠKODA 130 RS
After successful tests with the 180 RS and 200 RS rally prototypes, 1975 sees ŠKODA present a car designed for regular use on the race track, in the shape of the ŠKODA 130 RS. Its consistent lightweight construction, with aluminium body components (roof and door outer panels) and glass-reinforced plastic (GRP) parts (wings and bonnet), ensures that the successful two-door coupé based on the ŠKODA 110 R production model weighs only 720 kilos. The rear-wheel-drive race car has a 1.3-litre engine delivering 140 PS and garners numerous victories on the international rally circuit and on the race track until 1983. In 1977 the 130 RS wins the first two places in its class at the legendary Monte Carlo Rally and also takes top place at the Acropolis Rally. On the race track, it becomes the overall winner at the 1981 European Touring Car Championship.

Star production model: the ŠKODA OCTAVIA RS
In the year 2000, ŠKODA enters the World Rally Championship with its OCTAVIA WRC, while simultaneously introducing the RS letter combination for a production model. From then on, the RS moniker identifies a model series’ performance variant, a car that perfectly combines driving pleasure with the traditional pragmatic benefits of a ŠKODA. Launched twenty years ago, the ŠKODA OCTAVIA RS is the first model of a product family destined for success, with a 1.8-litre turbo engine delivering an exhilarating 132 kW (180 PS) of power. Offered first as a saloon and a year later also as a COMBI estate, this model is manufactured until 2005, reaching a production total of over 17,600 units. The second-generation OCTAVIA RS can be ordered with a 2.0 TFSI petrol engine providing 147 kW (200 PS) as well as, for the first time, a diesel engine: the 2.0 TDI has an output of 125 kW (170 PS), and all model variants are once again available in saloon and COMBI estate format. And with over 87,800 vehicles rolling off the production line, the OCTAVIA RS hits the overall production mark of 100,000 vehicles before its second generation comes to a close.

The third-generation OCTAVIA launched in 2013 is even more successful and introduces the continuous reflective red strip at the rear that has since become a hallmark of all RS models. The 2.0 TSI is launched with an output of 162 kW (220 PS), while the 2.0 TDI now delivers 135 kW (184 PS) and can for the first time also be ordered with all-wheel drive. Later on, the petrol engine produces 169 kW (230 PS) and a remarkable 180 kW (245 PS) in the OCTAVIA RS 245. As usual, the third generation is available both as a saloon and a COMBI estate and becomes a big hit with the brand’s fans. In Germany, Britain and Switzerland, the RS models achieve a share of over 20 per cent of sales within the OCTAVIA model series. Overall production figures for the third-generation ŠKODA OCTAVIA RS clock in at 172,000 units.

A new addition to the family: the ŠKODA FABIA RS
The year 2003 sees ŠKODA expand the RS family with the new FABIA RS. It is introduced at the Geneva Motor Show and serves as the basis for the new FABIA WRC rally car presented at the same time. The FABIA RS is the only FABIA to use the 1.9 TDI engine, which delivers 96 kW (130 PS) and combines excellent performance with a fuel consumption of just 5.6 litres of diesel per 100 kilometres. This car accelerates from 0 to 100 km/h in 9.6 seconds and has a top speed of 204 km/h. 2010 welcomes the arrival of the second-generation FABIA’s RS variant, powered by a 132-kW (180-PS) 1.4-litre petrol engine featuring both a turbocharger and a supercharger as well as a seven-speed DSG. For the first time, the FABIA RS is also available as a COMBI estate.

Record holder: the ŠKODA KODIAQ RS
The KODIAQ RS launched in 2018 is the first SUV to join the RS family, establishing its sporty credentials with a 9:29.84-minute lap record for seven-seater SUVs on the Nürburgring race track’s legendary 20.832-kilometre North Loop. This car’s 2.0 TDI has an output of 176 kW (240 PS) and delivers a winning combination of performance and sustainability. The Dynamic Sound Boost provides the exhilarating acoustic backdrop for the most powerful KODIAQ.

To be continued: the ŠKODA OCTAVIA RS iV
It won’t be long now before the fourth-generation ŠKODA OCTAVIA will add the next chapter to the successful history of the RS family. The OCTAVIA RS iV will be the first ŠKODA performance model to feature a plug-in hybrid powertrain. It will have its premiere at the Geneva Motor Show, which runs from 3 to 15 March 2020. 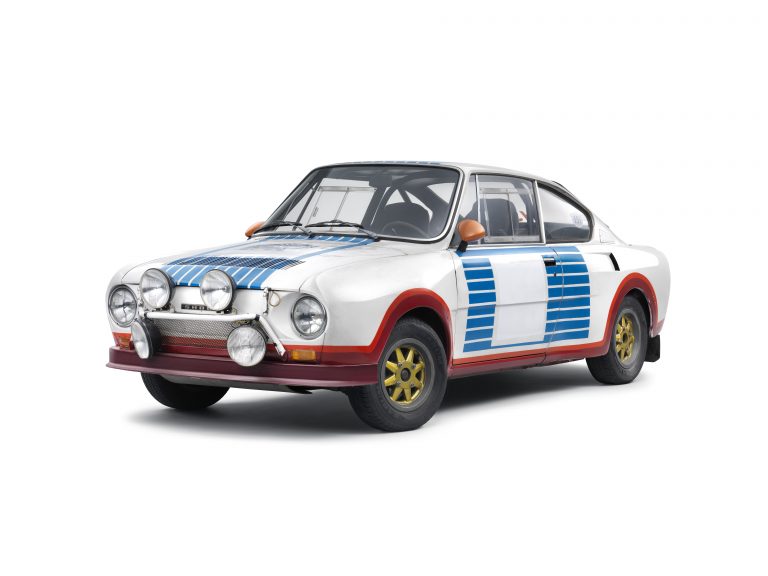 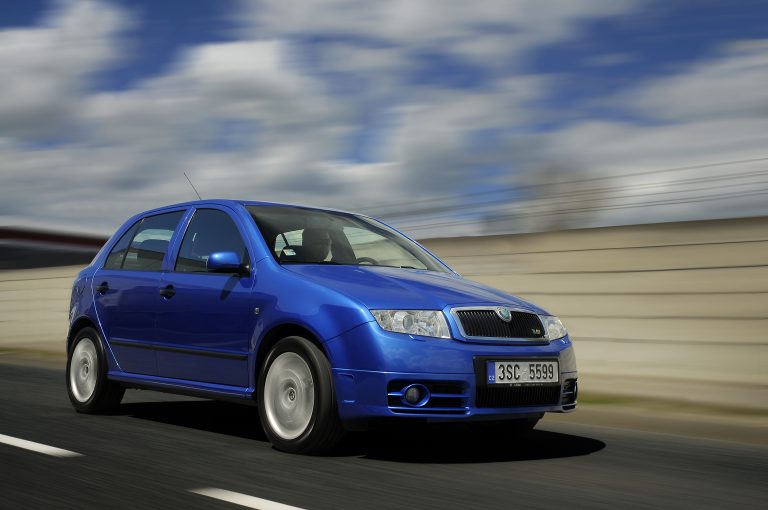 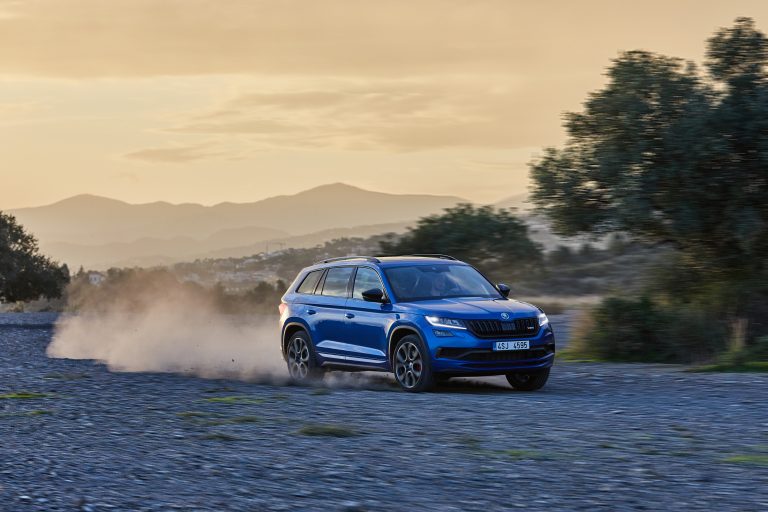 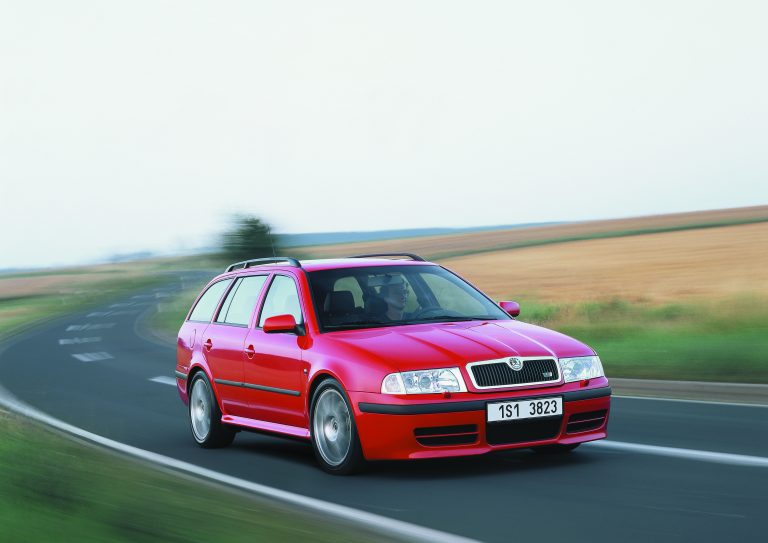 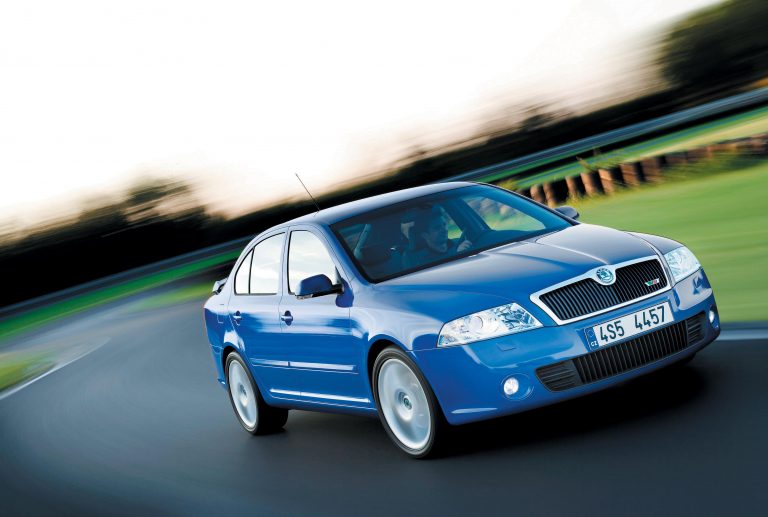 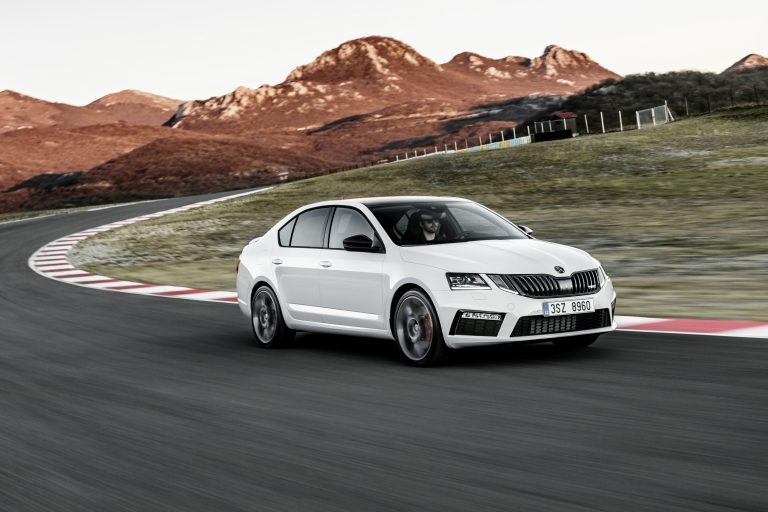