› ŠKODA AUTO delivers 721,900 vehicles to customers worldwide from January to September despite the coronavirus pandemic
› ŠKODA AUTO Group* sales revenue exceeds 12 billion euros in the first three quarters, with a return on sales of 3.9%
› Clearly positive operating profit of 469 million euros generated in a challenging business environment
› Successful world premiere of the ŠKODA ENYAQ iV in Prague in early September, online ordering now live; market launch of the all-electric SUV set for spring 2021
› Deliveries and results in the fourth quarter dependent on the development of the ongoing COVID-19 situation in the Czech Republic and the European Union and the necessary health protection measures

Mladá Boleslav, 30 October 2020 – ŠKODA AUTO delivered 721,900 vehicles to customers worldwide (-21.0%) in the first nine months of 2020. Following the broad reopening of sales channels in the third quarter, the car manufacturer’s worldwide deliveries in September were again up on the previous year’s level. By the end of September, the ŠKODA AUTO Group* had generated a clearly positive operating profit of 469 million euros. The other key financial figures also reflect the general stabilisation; however, they continue to be strongly influenced by the effects of the measures to contain the coronavirus pandemic. ŠKODA AUTO’s revenue in the first three-quarters of 2020 amounts to over 12 billion euros, and the return on sales is 3.9%. 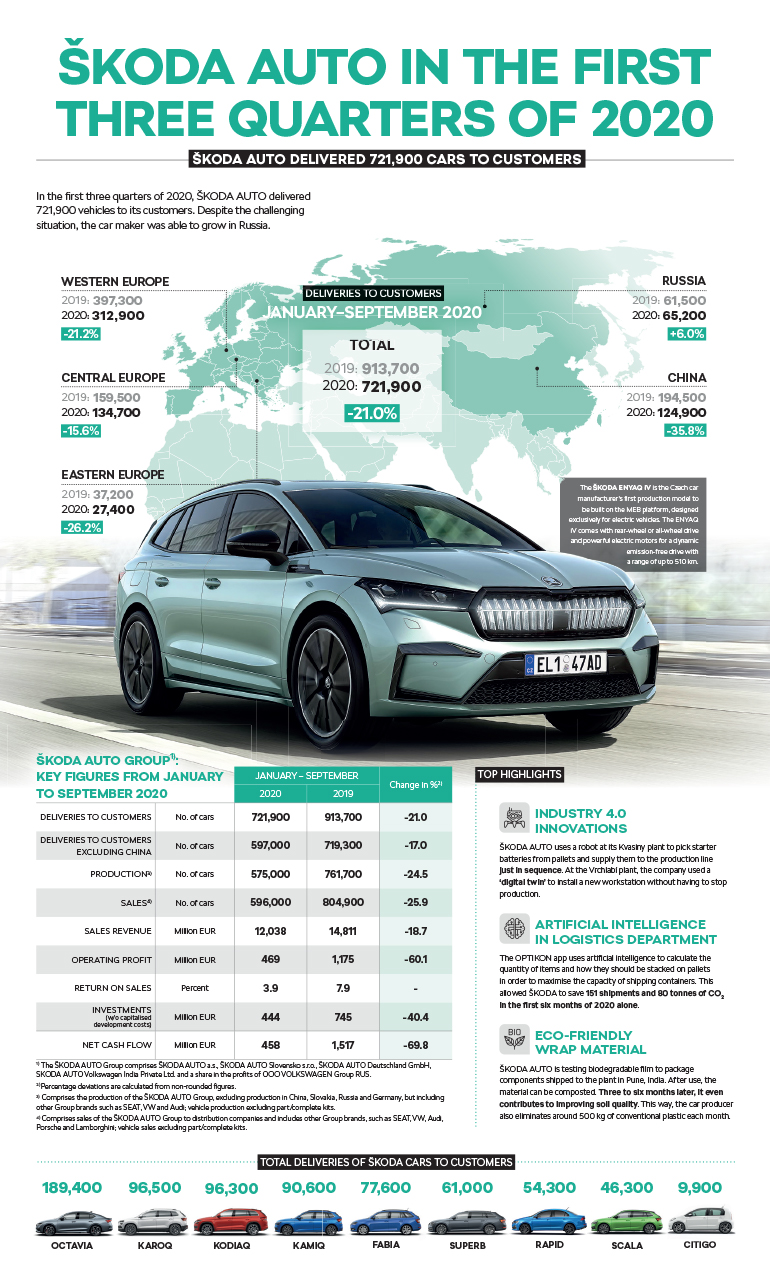 ŠKODA AUTO gained considerable momentum in the third quarter following the heavy burden on the company’s deliveries and financial figures in the first half of the year due to the extensive restrictions imposed worldwide to contain the first wave of the COVID-19 pandemic. ŠKODA AUTO was able to deliver 295,200 vehicles to customers thanks to the sales channels recently returning to stable operation and the implementation of restart programmes tailored specifically to the market conditions. In total, the company delivered 721,900 vehicles to customers in the first three quarters, a year-on-year drop of 21.0%. The reasons for this include the significant disruption to markets and production losses due to the 39-day factory shutdown during the second quarter. These cannot be compensated for in the Czech Republic at present, as further COVID-19-related production constraints might be imposed this year. In September, ŠKODA AUTO delivered 104,600 vehicles, up 2.6% on the previous year. The operating profit of the ŠKODA AUTO Group* in the first three quarters amounted to 469 million euros, and the return on sales stood at 3.9%.

Klaus-Dieter Schürmann, ŠKODA AUTO Board Member for Finance and IT, emphasises: “The key financial figures for the third quarter prove that our strict cost discipline is paying off. Our additional short-term programme to reduce costs and capital expenditure is taking effect, as are the measures to optimise our current assets and liquidity. We are monitoring the current development of the COVID-19 situation very closely. We are going to take further steps to mitigate the financial impact of the increasingly stringent measures to contain the virus.”

The company is committed to its medium-term goals and is pursuing the most ambitious model campaign in the company’s history. At the beginning of September, the all-electric

ŠKODA ENYAQ iV celebrated its world premiere in Prague. The international market launch of the brand’s first series model based on the Volkswagen Group’s Modular Electrification Toolkit (MEB) will take place in the spring of 2021. The car manufacturer expects the new SUV to provide further positive impetus and win over more customers to the ŠKODA brand.

ŠKODA AUTO Board Member for Sales and Marketing Alain Favey emphasises: “Over the last three months, we have been able to reaffirm our successful course on the international markets. Our dealers have been working tirelessly throughout the year to provide customers with the best possible service in this unprecedented situation. In addition, our restart programmes have had the intended effect. Our market share in the European Union had reached a record level of 5.4% by the end of September, up 0.6 percentage points year-on-year. Moreover, we were able to increase our order intake and deliveries in September compared to the same month last year. The further development of our vehicle deliveries is directly linked to the course of the current COVID-19 wave. It is therefore not possible to make a reliable forecast for the fourth quarter.”

In Eastern Europe excluding Russia, ŠKODA recorded 27,400 vehicle deliveries between January and September, which represents a decline of 26.2% (January to September 2019: 37,200 vehicles).

In Turkey, ŠKODA recorded 15,800 vehicle deliveries in the first three quarters of the year, an increase of 91.8% over the same period last year (January to September 2019: 8,200 vehicles).