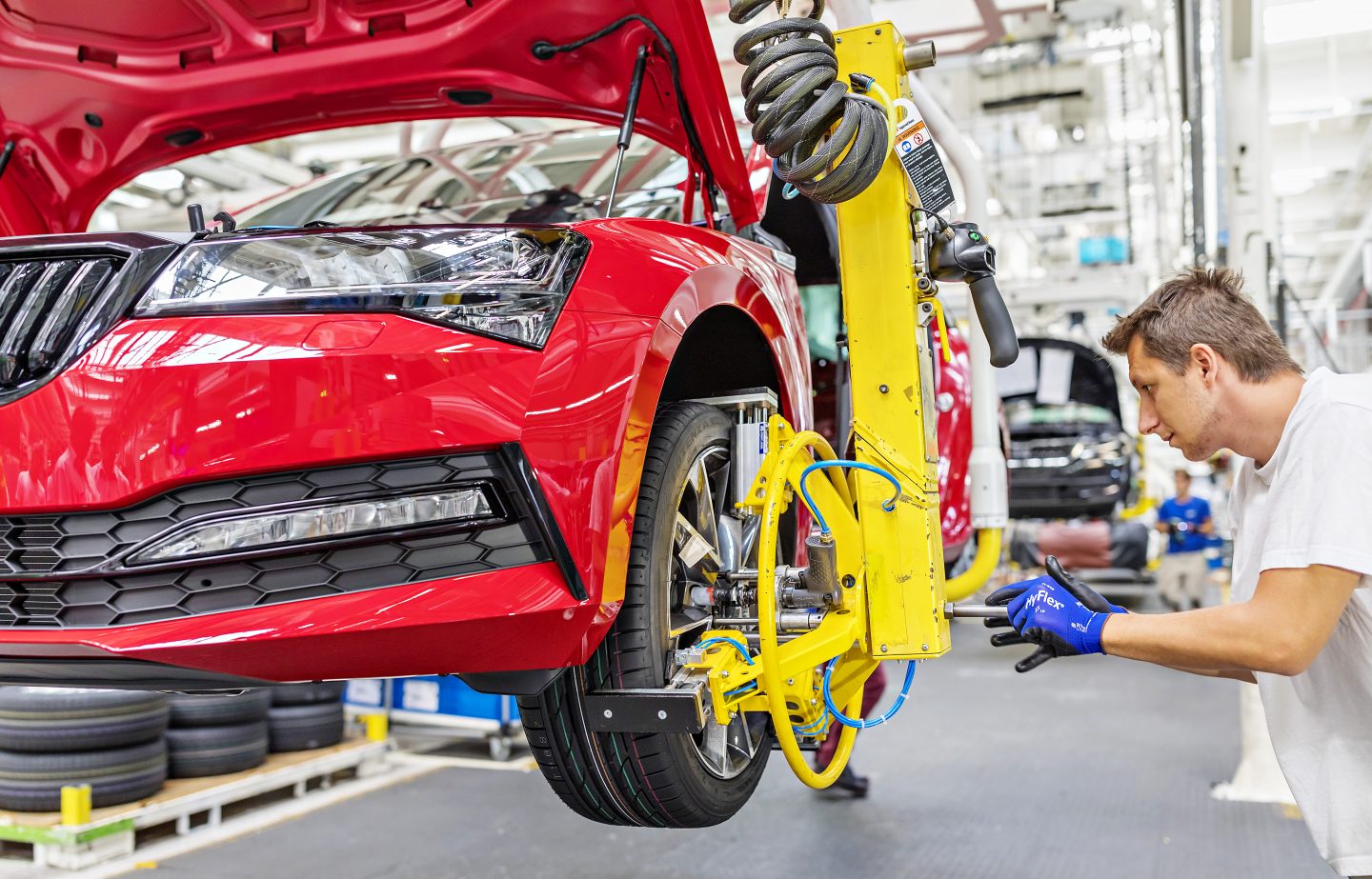 › First upgraded, third-generation SUPERB rolled off the ŠKODA AUTO production line in Kvasiny
› The brand’s flagship is one of the most successful vehicles in the mid-size car segment across Europe
› Around 1.25 million SUPERBs have been manufactured to date

Kvasiny, 19 July 2019 – The first modernised ŠKODA SUPERB rolled off the production line today at the ŠKODA AUTO Kvasiny plant. ŠKODA has systematically refined the SUPERB’s dynamic and elegant design. The carmaker has also upgraded its top model with new technologies. Since the first modern-day SUPERB was launched in 2001, this model line has formed the pinnacle of the ŠKODA portfolio and established itself as one of the bestsellers in the mid-size car segment.

Michael Oeljeklaus, ŠKODA AUTO Board Member for Production and Logistics, said, “For 18 years, our flagship model range has been impressing customers all over the world. As one of the best and most frequently acclaimed models in the mid-size car segment, the ŠKODA SUPERB has long been synonymous with premium manufacturing quality from the Czech Republic. By beginning production of the comprehensively updated third generation, we are consistently pressing ahead with this success story.”

The redesigned front and the radiator grille with double slats are characteristic features of the upgraded ŠKODA SUPERB’s exterior. Moreover the ŠKODA SUPERB boasts new self-assured brand lettering on the tailgate. This hallmark also adorns the new ŠKODA SCALA and KAMIQ compact models and will now gradually feature on the rear of all ŠKODA models.

Technological highlights of the updated flagship include its full LED Matrix headlights, which are making their debut in a ŠKODA production model. With a generous amount of interior space and a boot capacity of 625 l in the hatchback and 660 l in the estate, the SUPERB continues to set benchmarks in the segment.

Boasting an expressive design and a superior amount of space, the third generation of the ŠKODA SUPERB – launched in 2015 – set new benchmarks and allowed the brand to tap into new customer groups. Never before had such high requirements been placed on the design of a ŠKODA, nor had so many new technologies been incorporated into the development of a model. And never before had there been as many new Simply Clever features rolled into one car, nor had ŠKODA engineers created so much space for the driver, passengers and their luggage. Furthermore, a wide array of the state-of-the-art technologies that provide added safety, comfort and connectivity had previously only been seen in higher vehicle segments.

Following its launch, the third generation of the ŠKODA SUPERB immediately won numerous comparison tests, thereby pitting itself against higher-tier vehicles. The brand’s flagship was shortlisted for both ‘Car of the Year 2016’ (COTY) and ‘World Car of the Year 2016’ (WCOTY). Both awards are amongst the most coveted international prizes in the automotive industry. Furthermore, the SUPERB won the title of ‘Car of the Year’ in the Czech Republic, and the estate version, the SUPERB COMBI, received the ‘Red Dot Design Award’ for its exceptional design. In total, the third generation of ŠKODA’s flagship has already received more than 30 international awards from the trade press.

In addition to the brand’s SUV portfolio enjoying major market success, the SUPERB is another particularly successful model. Both SUPERBs, i.e. the hatchback and estate, are particularly popular in Germany – where last year 19,200 vehicles were delivered to customers – as well as in the UK (8,600), Poland (8,000), Turkey (7,700) and the Czech Republic (5,300).

The visually and technologically upgraded version of the ŠKODA SUPERB celebrated its world premiere in May in the Slovakian capital, Bratislava, as part of the 2019 IIHF Ice Hockey World Championship – which ŠKODA supports as the main sponsor. At the same time, ŠKODA unveiled the new ŠKODA SUPERB iV plug-in hybrid, with which it is entering the era of e-mobility. Furthermore, a new variant, the ŠKODA SUPERB SCOUT with off-road characteristics, was added to the successful SUPERB family and made its debut.

ŠKODA produces all of the variants of its flagship at the ultra-modern Kvasiny plant. This year will also see the start of production for the plug-in-hybrid SUPERB iV at this site. In 2018, more than 300,000 vehicles rolled off the production line in Kvasiny for the first time – the ŠKODA KODIAQ and KAROQ SUVs are also manufactured there. ŠKODA employs around 9,000 members of staff at the plant.

SUPERB – quality and comfort since 1934
The success story of the SUPERB model range dates back to 1934, when the ŠKODA 640 SUPERB was launched. Its name was derived from the Latin word ‘superbus’, meaning ‘marvellous’, ‘outstanding’ or ‘magnificent’. The name has since been synonymous with the most supreme of ŠKODAs and – until 1949 – adorned the brand’s luxury limousines.

In 2001, ten years after becoming part of Volkswagen Group, the Czech brand took up the name rich in heritage once again, and re-entered the mid-size car segment with the first generation of the modern-era ŠKODA SUPERB. Back then, it was the brand’s third model range, alongside the OCTAVIA and FABIA, and impressed customers with its modern technology and generous amount of space.

In 2008, the second-generation ŠKODA SUPERB made its worldwide debut at the Geneva Motor Show. The new model was impressive, boasting even more space, an elegant appearance and supreme workmanship. What was more, the SUPERB was now available with all-wheel drive for the first time. In 2009, the practical ŠKODA SUPERB COMBI followed.

And in 2015, the Czech carmaker set new benchmarks when launching the current SUPERB. In just four years, half a million third-generation models have been produced. 358,200 of these were made in Kvasiny alone. Another four production sites have been added since the car was launched: Aurangabad (India), Nanjing (China), Ust-Kamenogorsk (Kazakhstan) and Solomonovo (Ukraine).

Today, the SUPERB ranks among the best and most successful mid-size cars across Europe and has contributed considerably to ŠKODA’s continued growth trajectory. The ŠKODA SUPERB’s production figures emphasise the success of the brand’s flagship: Following on from the first generation, 136,100 of which were produced, the successor saw a significant rise in the numbers of cars built. Between 2008 and 2015, ŠKODA manufactured a total of 618,500 second-generation SUPERBs. Since the launch of the third generation in March 2015, 500,000 SUPERBs have been made. This means that, to date, a total of approximately 1.25 million units of ŠKODA’s flagship have rolled off the production line. 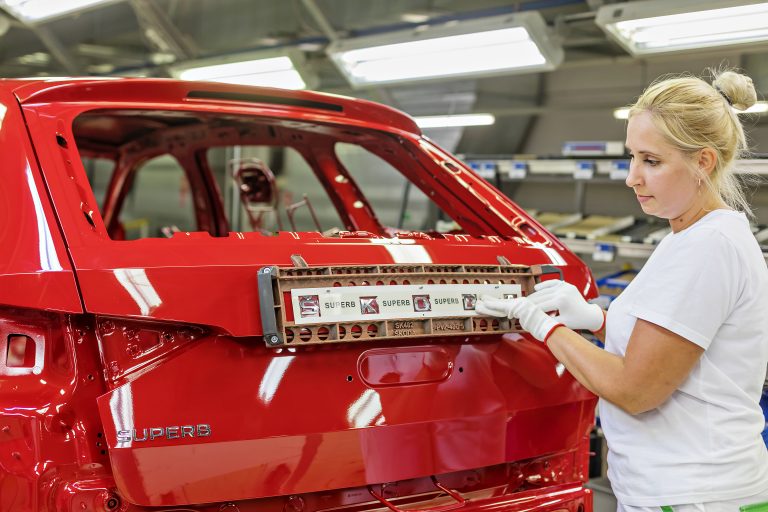