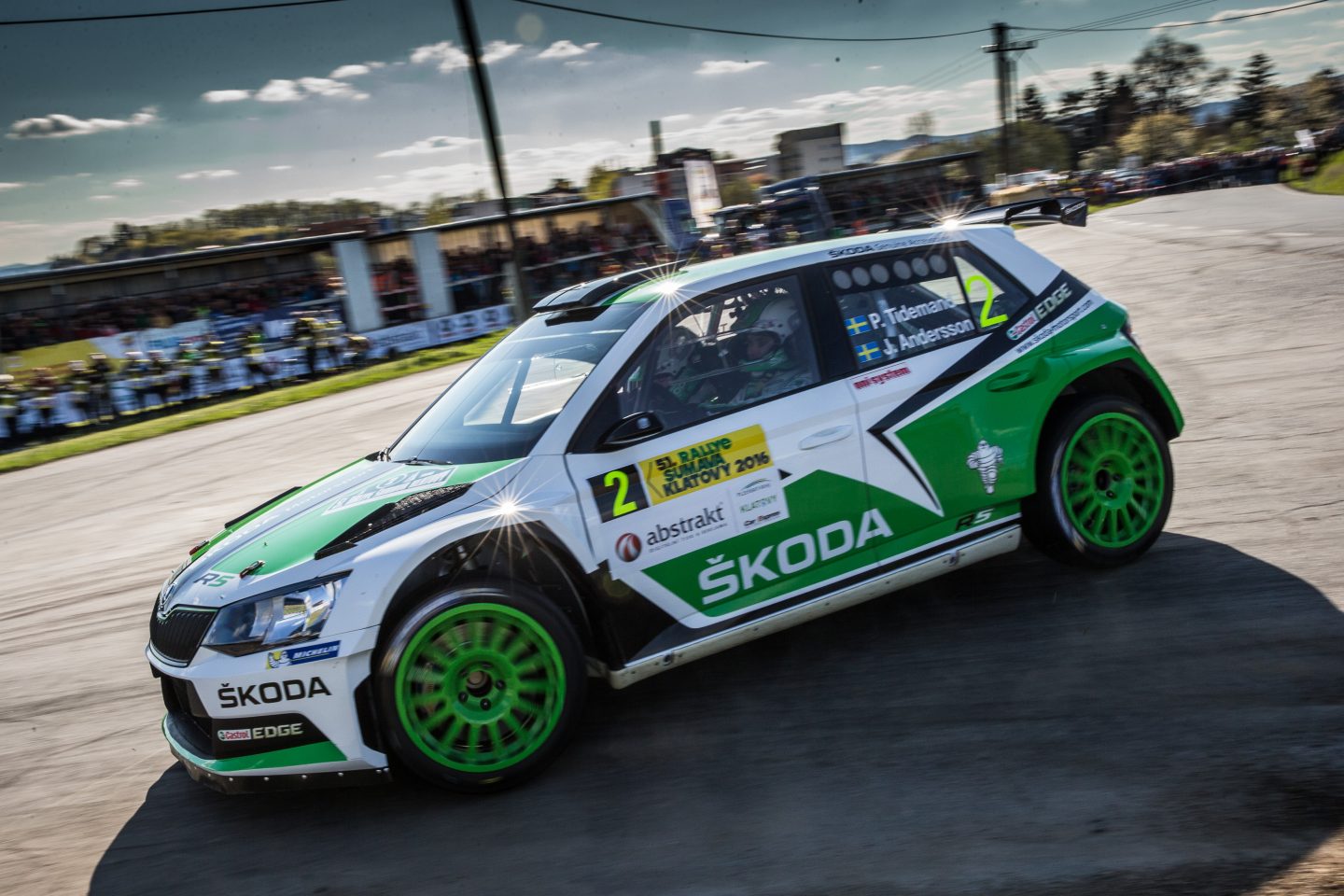 Mladá Boleslav, 16 May 2016 – ŠKODA Motorsport is entering the hot phase of the FIA World Rally Championship (WRC 2) at the Rally Portugal. Pontus Tidemand/Jonas Andersson (S/S) and Jan Kopecký/Pavel Dresler (CZ/CZ) will be battling for top results at the second World Championship start for the works team this year. With 368 kilometres spread across 19 stages from Thursday to Sunday, including the legendary Fafe special stage, the rally will be a huge test of man and machine. 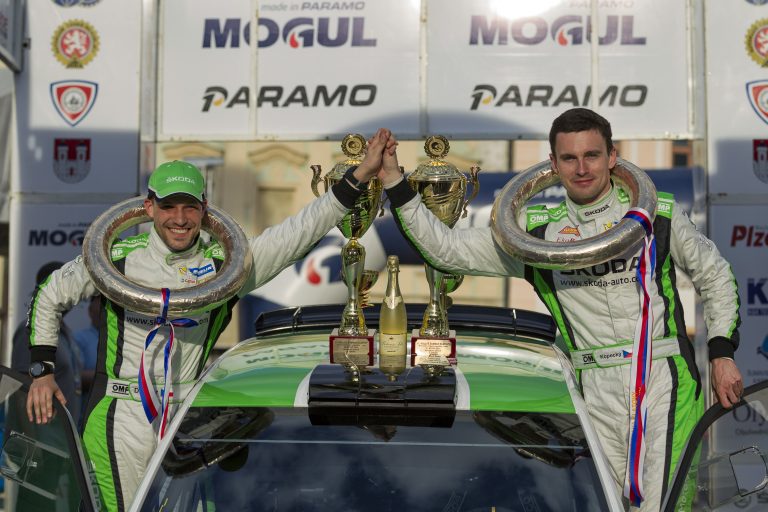 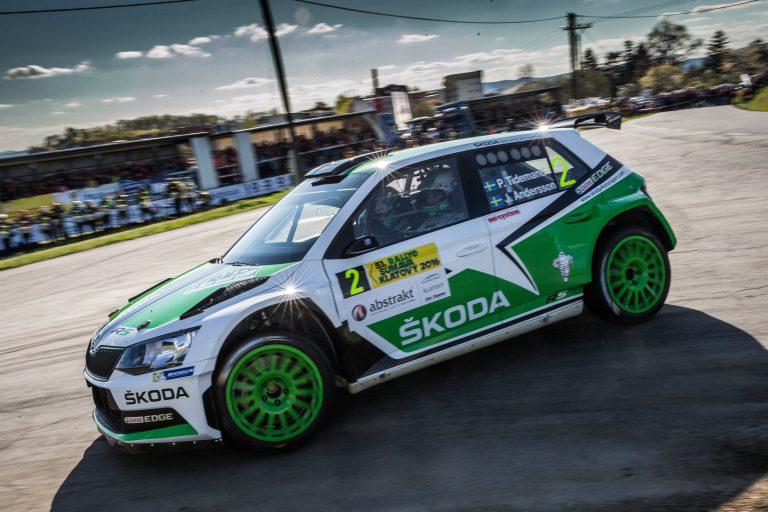 “One year ago, we celebrated the debut of our ŠKODA Fabia R5 in the World Rally Championship with second and third place at the Rally Portugal,” recalls ŠKODA Motorsport Director Michal Hrabánek. “We would like to build on that result. We feel ready to face the extreme challenges of this difficult rally as a team, and we want to prove ourselves against top competition,” Hrabánek adds.

A total of 25 driver/co-driver duos have registered for the WRC 2 category at the Rally Portugal. In addition to ŠKODA works drivers Tidemand and Kopecký, eight more drivers will be competing in a ŠKODA Fabia R5. “Our customers love this vehicle, proving just what a reliable and fast rally car our Fabia R5 is,” says Hrabánek. It is a successful car too: at the 51st Rally Šumava Klatovy, Jan Kopecký and Pontus Tidemand crowned the dress rehearsal for the World Championship rally in Portugal with an excellent one-two.

Asia-Pacific champion Tidemand knows the gravel stages in Portugal well, after racing there last year. In May 2015, he claimed third place behind his ŠKODA team-mate Esapekka Lappi (FIN). “I would like to finish a bit higher in the overall standings this time,” says Tidemand. “Jonas and I want to be challenging for the win in Portugal, even though this will be really hard work.” The 25-year-old and his navigator Jonas Andersson marked the first appearance for ŠKODA Motorsport in this year’s World Championship by finishing second at their home rally in Sweden.

In Portugal, Jan Kopecký will be competing in WRC 2 for this first time this year. The stages near the Atlantic Ocean, in the northern region of the country, are totally new to the experienced 34-year-old. When he competed at the Rally Portugal nine years ago, the event took place on the Algarve. “We are really looking forward to getting started in the World Championship,” says Kopecký. “Such a long and challenging rally demands that you keep your head and don’t take unnecessary risks. Of course we want to finish with the best result possible, but the season has a long way to go,” Kopecký adds. Portugal is the fifth of 14 locations for the top flight of rallying. Each driver can nominate seven rallies, in which he can score points for the WRC 2 championship standings

The legendary Fafe special stage on Sunday has to be completed twice, and will play a decisive role at the Rally Portugal. Tens of thousands of fans will make the pilgrimage to the 11.19-kilometre stage, which includes a huge jump. Works driver Esapekka Lappi recorded the best time here in WRC 2 last year, in the ŠKODA Fabia R5. That is a good omen for ŠKODA Motorsport at the 2016 Rally Portugal.

… the last two World Championship rallies in the WRC 2 class have both been won by a ŠKODA Fabia R5? Finnish driver Teemu Suninen won in Mexico, and in Argentina there was no stopping Nicolás Fuchs in the fast and reliable four-wheel drive car from Mladá Boleslav.

… the ŠKODA drivers are well represented in the championship standings after four out of fourteen races in WRC 2? British driver Elfyn Evans (62 points) leads, followed by Hubert Ptaszek (42), Nicolás Fuchs (37), Armin Kremer (D/28) and Teemu Suninen from second to fifth. The best-placed ŠKODA works driver is Pontus Tidemand, in sixth place with 18 points. However, he has only competed in one World Championship rally, and each driver can score points for the overall standings in seven of the year’s rallies.

… the fifth FIA World Rally Championship (WRC 2) event begins on Thursday on a Rallycross track? The first 3.36 kilometres are scheduled for Lousada on Thursday evening. Before that, the ceremonial start will take place in Guimarães.

… the rally is taking place in the northern region of Portugal for the second year in succession? The Rally Centre is in the Exponor exhibition centre in Matosinhos, on the outskirts of Porto. The special feature of this location: the teams and their mechanics are not out in the open as normal, but are housed in the exhibition halls.

… the Rally Portugal was first held in 1967? This rally also formed part of the first FIA World Rally Championship season in 1973.

… the rally has been voted “Best Rally in the World” on five occasions? The most successful driver is Finland’s Markku Alén with five wins between 1975 and 1987. A win at the weekend in the Volkswagen Polo R WRC for three-time world champion Sébastien Ogier (F) would also see him celebrate his fifth win in Portugal.

… Porto is the second-largest city in Portugal after Lisbon? It is one of the oldest European cities, and sits at the mouth of the Douro on the Atlantic coast.