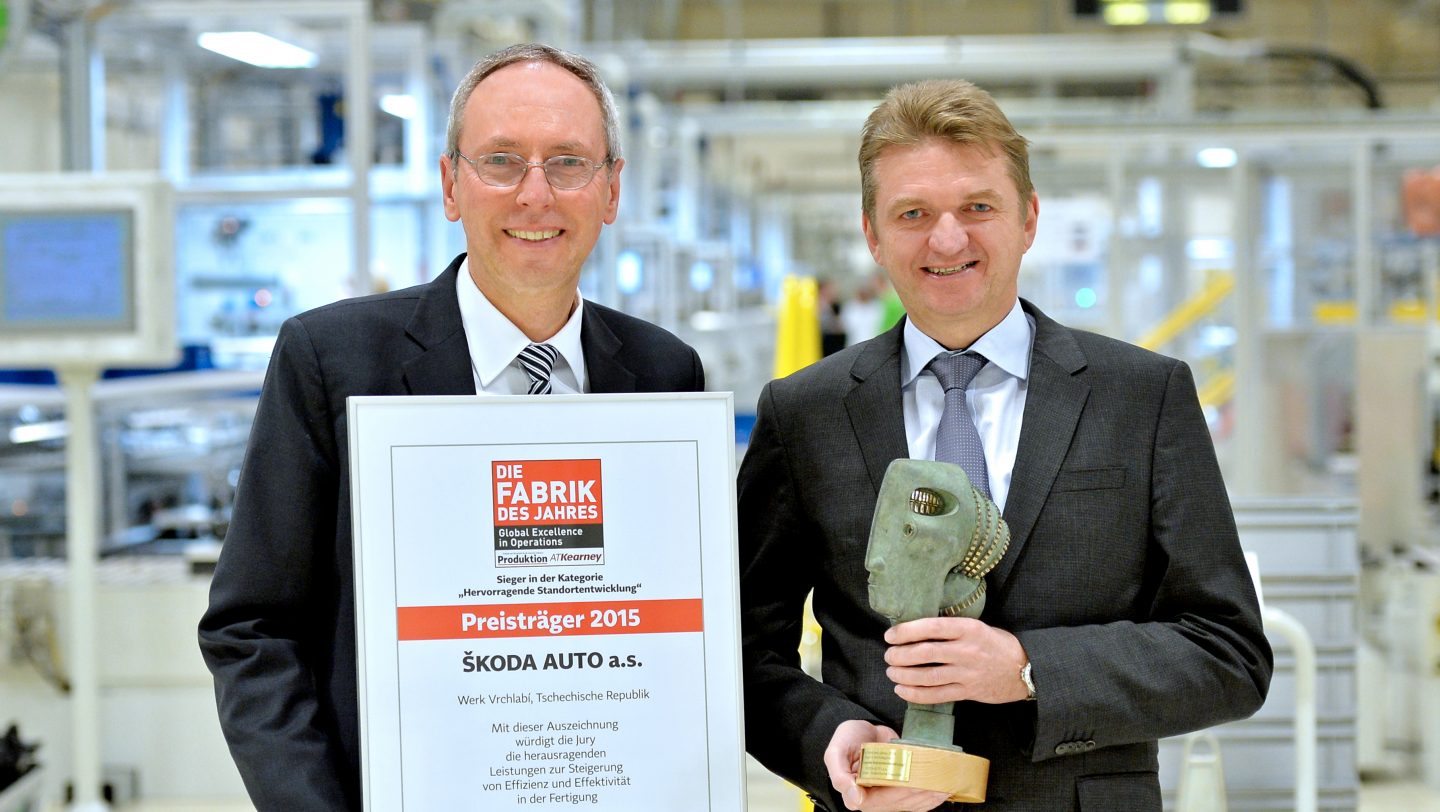 ​Mladá Boleslav/Ulm, 9 March 2016 – ŠKODA’s Vrchlabí plant has received the ‘Factory of the Year’ award. The prize was presented on 1 March 2016 in Ulm (Baden-Württemberg, Germany). The quick and successful transformation of the production plant in Vrchlabí from a vehicle assembly to component production facility was decisive in the jury’s decision to award ŠKODA’s Vrchlabí plant with the ‘Factory of the Year’ award in the category ‘Outstanding Location Development’. 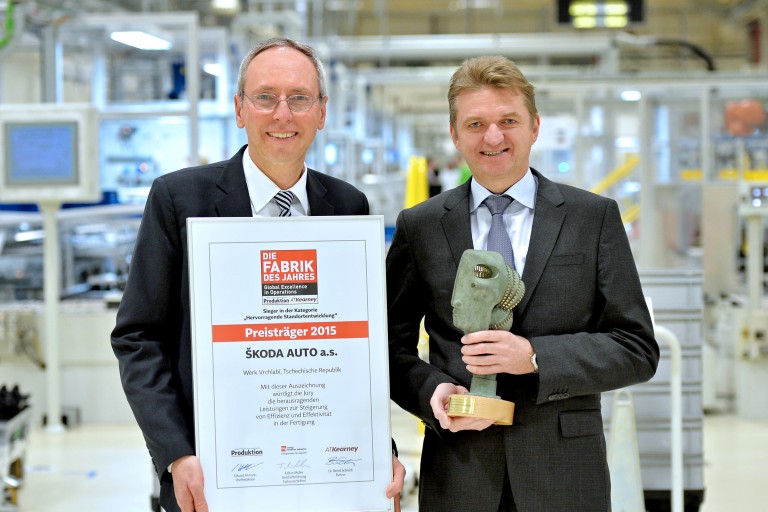 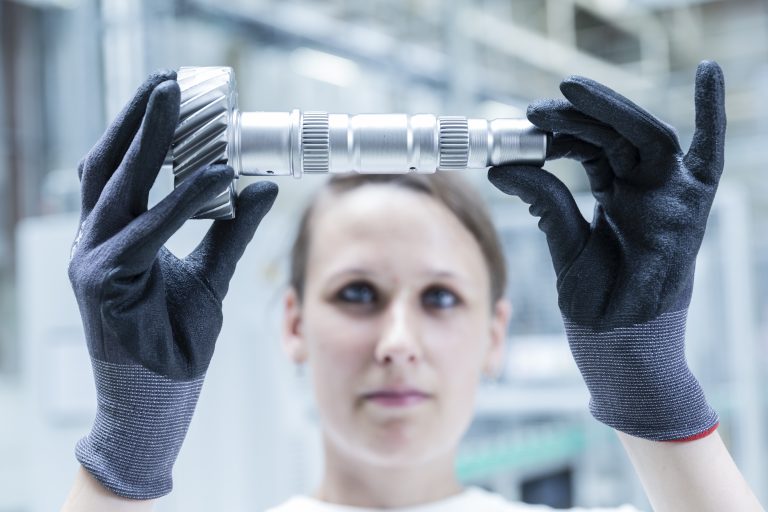 “Receiving this award makes us very proud, and it is a great acknowledgment of the outstanding work of the entire team,” says ŠKODA Board Member for Production Michael Oeljeklaus, adding “In a joint effort among the employees, trade union and the company, we have transformed Vrchlabí over recent years into a high-tech location for gearbox manufacturing, thereby securing the future of the site.”

ŠKODA won out against the completion, receiving first place in the category ‘Outstanding Location Development’. The plant was evaluated on the following criteria: value appreciation, customer satisfaction, quality, innovation and efficiency. In their statement, the jury of leading representatives from industry and research praised ŠKODA for quickly and successfully transforming the Vrchlabí plant from a vehicle assembly plant to component production facility.

“The award is a great tribute to the entire ŠKODA team who successfully implemented the location’s transformation process through their commitment, competence and great flexibility,” said Frank Engel, Head of Component production, at the award ceremony in Ulm.

The ‘Factory of the Year’ award is one of the most prestigious competitions for the manufacturing industry in Europe, and has been organised by the trade journal ‘Produktion’ and consultancy firm A.T. Kearney since 1992. From any industry, manufacturing companies with more than 100 employees can be entered into the ‘Factory of the Year’ competition.

The Volkswagen Group awarded Vrchlabí the contract for DQ 200 production in early 2011. The first DQ 200 gearboxes ran off the production lines there in October 2012. ŠKODA has invested around €245 million into the local DSG production in partnership with the Volkswagen Group. The majority of that sum has gone into technical facilities and other areas, such as the Training Centre for transmission production, the logistics area, the Measuring Centre, laboratories and the Centre for Quality Analysis. New buildings have been constructed and existing facilities modernised at a cost of around €27 million.

ŠKODA is currently increasing the location’s production capacity. From April 2016, the daily manufacturing volume will increase from 1500 to 2000 DQ 200 gearboxes. The manufacturer will be investing a further €25 million into the expansion.  The production capacity had already increased from 1000 to 1500 DSG gearboxes per day in 2014.

The DQ 200 seven-speed direct shift gearbox manufactured in Vrchlabí is used in ŠKODA vehicles as well as models from other group brands, and is one of the most innovative automatic transmissions in the automotive industry.

A total of one million DQ 200 gearboxes have been produced at the Vrchlabí site to date. Approximately 1000 people are employed in gearbox production at Vrchlabí, making ŠKODA one of the largest and most important employers in the Hradec Králové region. 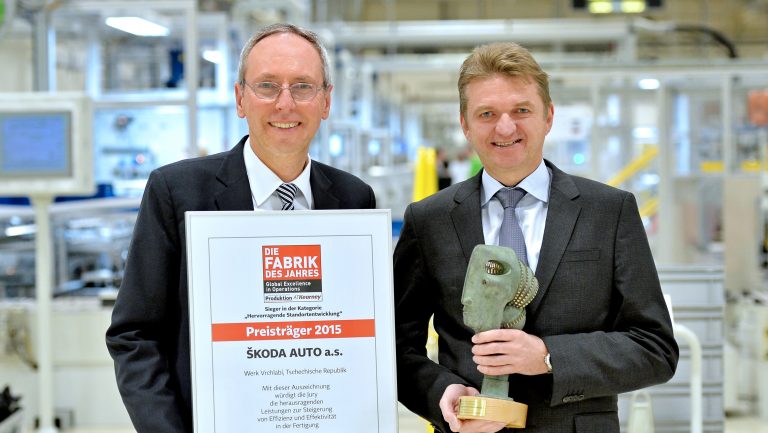 Factory of the Year