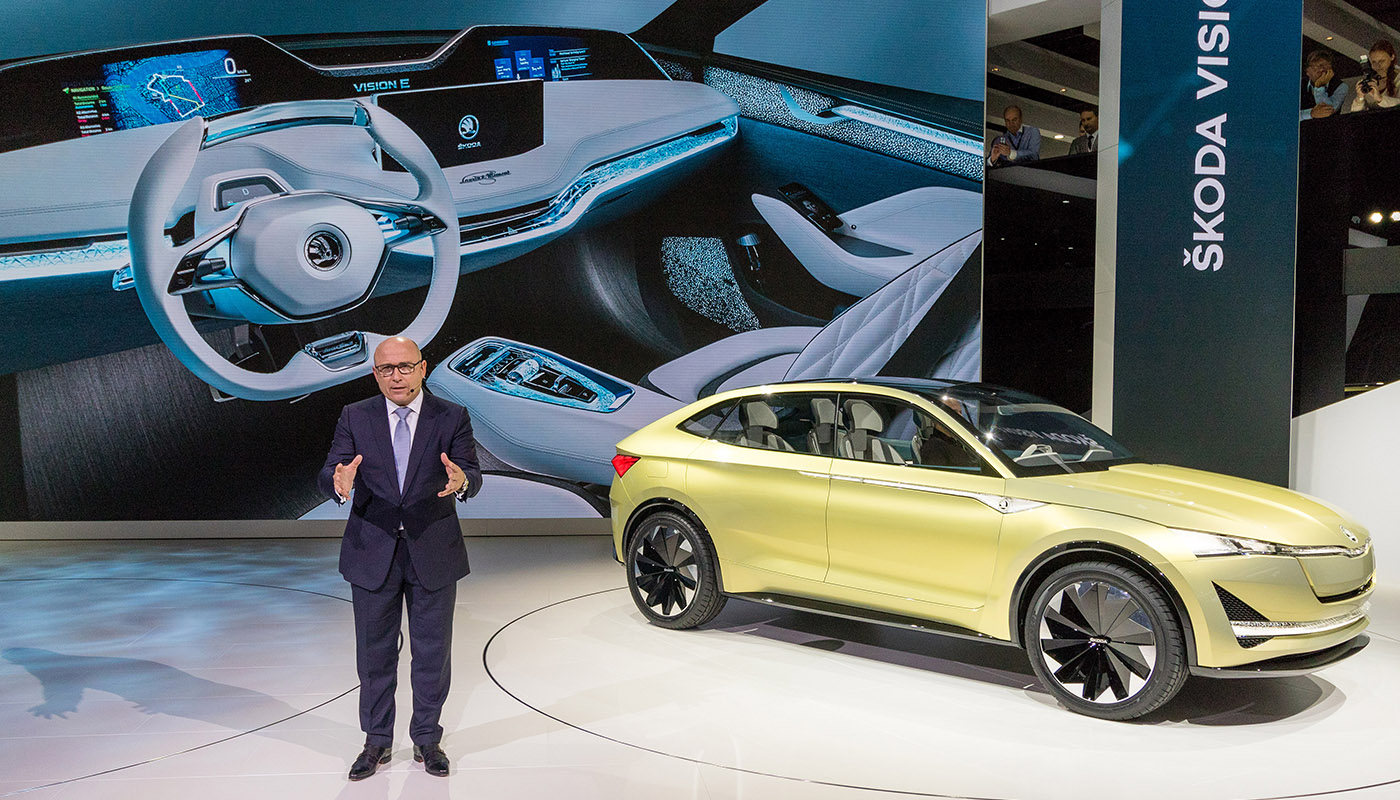 Frankfurt, 12 September 2017 – Today, ŠKODA presented the ŠKODA VISION E concept car for the first time in Europe at the IAA in Frankfurt (12-24 September). The study is the first all-electric vehicle in the company’s history. ŠKODA is also continuing its SUV campaign at the IAA: The new compact SUV ŠKODA KAROQ is celebrating its trade show premiere and is the traditional Czech brand’s first model to feature a fully customizable digital instrument cluster. With the ŠKODA KODIAQ SCOUT and ŠKODA KODIAQ SPORTLINE, the car manufacturer also introduces two attractive model variants of its large SUV.

The Press Kit including texts, photos and videos is available as digital presentation or at www.skoda-storyboard.com. 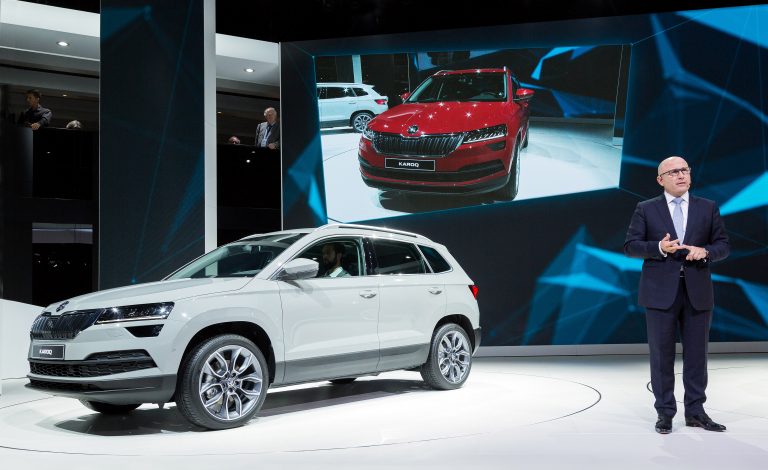 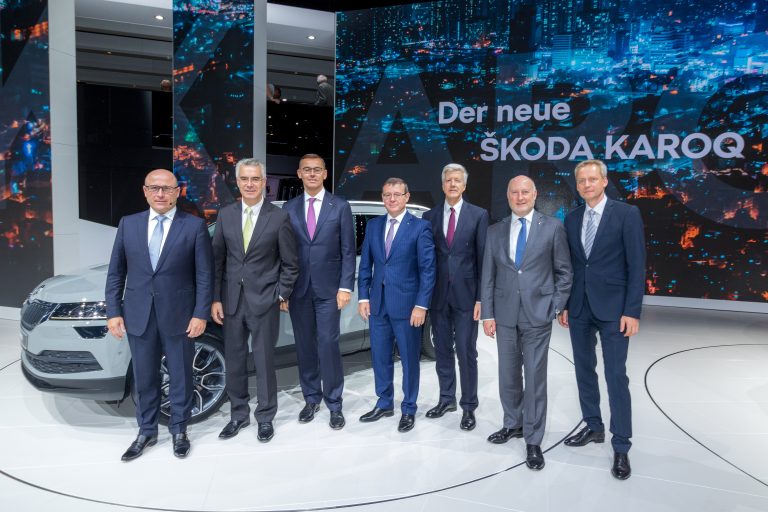 ŠKODA is taking a big step towards a digital future with the ŠKODA VISION E study, which is celebrating its European premiere in Frankfurt. The first electric concept car in the company’s history offers autonomous driving at level 3 and raises connectivity to a new level: In addition to a screen on the dashboard and a central touch-screen display, each passenger also has their own screen.

Numerous details such as vehicle data and entertainment can be accessed via these touch-screens: In each door, there is a phone box that charges smartphones inductively. At the same time, the box serves as an interface: the individual touch-screen displays allow passengers to access personal settings, data and information conveniently.

The design of the ŠKODA VISION E study shows key elements of ŠKODA’s new design language for electric vehicles. Compared to the version that celebrated its world premiere in Shanghai, the front is now even more distinctive. The car’s unique features include counter-opening doors and four individual rotatable seats. A typical ŠKODA: Thanks to the long wheelbase of 2851 millimetres, the interior is extremely spacious and comfortable. The conceptual elimination of the central tunnel also provides additional room.

Electric engines with a total output of 225 kW (306 hp) drive all four wheels. The level-3 automated VISION E has an impressive range of up to 500 kilometres and a top speed of 180 km/h. On motorways, the concept car can accelerate, steer, brake and avoid obstacles without driver input. The Car Park Autopilot automatically manoeuvres the vehicle to empty spaces. The VISION E is charged inductively.

The new ŠKODA KAROQ is an SUV with a unique character. Its emotional and dynamic design with numerous crystalline elements demonstrates the brand’s current SUV design language. The long wheelbase (2638 mm) also guarantees plenty of space for passengers and luggage. With the rear seat in the default position, the boot has a capacity of 521 litres – the largest luggage compartment in its class. The ŠKODA KAROQ also features many ‘Simply Clever’ details, such as the virtual pedal, which opens the boot door with a foot swipe beneath the rear bumper. The optional VarioFlex rear seat solution makes the storage volume variable – between 479 and 588 litres. The VarioFlex system consists of three separate rear seats that can be adjusted individually and completely removed; the compact SUV is then transformed into a van with a maximum load volume of 1810 litres.

The ŠKODA KAROQ is the brand’s most digitised vehicle. This is ŠKODA’s first vehicle with a fully customizable digital instrument cluster. The display can be personalised and linked to the infotainment system. All captive touch displays feature the brand’s characteristic glass design. Thanks to the LTE module and WLAN hotspot that each passenger can connect to, everyone in the ŠKODA KAROQ is always online. Five engine variants with a power output of 85 kW (115 hp) to 140 kW (190 hp) are available – including two petrol engines and three diesel engines. Both petrol engines and two of the diesel variants are new to the programme.

Also in the black interior, there are many new details and features – such as sports seats with Alcantara® upholstery and silver-coloured seams. The stainless steel and aluminium pedals also underline the sporty, dynamic character of the vehicle. In the DSG versions, the multifunction leather steering wheel also has shift paddles. SPORTLINE logos are located on the front mudguards and glove compartment.

The central infotainment display of the ŠKODA KODIAQ SPORTLINE shows the oil and coolant temperatures, acceleration, and boost pressure. The lap timer can also be used to measure the time of each lap.

The ŠKODA KODIAQ SCOUT also stands out visually and technically from the basic model. It is equipped with all-wheel drive. Details such as the roof rack, exterior mirror casing and the special underbody protection (front and rear) are also in silver and underline the robust appearance of the ŠKODA KODIAQ SCOUT. The Alcantara®-upholstered seats in the black interior bear the SCOUT logo and come as standard along with the door trim in the same material. The four door sill trims feature the KODIAQ logo. The infotainment screen displays the steering angle, compass and altimeter, as well as oil and coolant temperatures.

Petrol and diesel engines with outputs ranging from 110 kW (150 hp) to 140 kW (190 hp) are available for the ŠKODA KODIAQ SCOUT and SPORTLINE model versions. 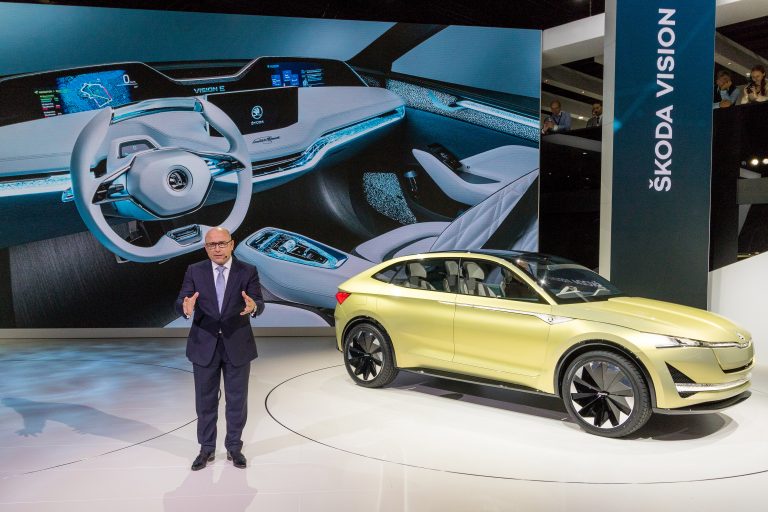