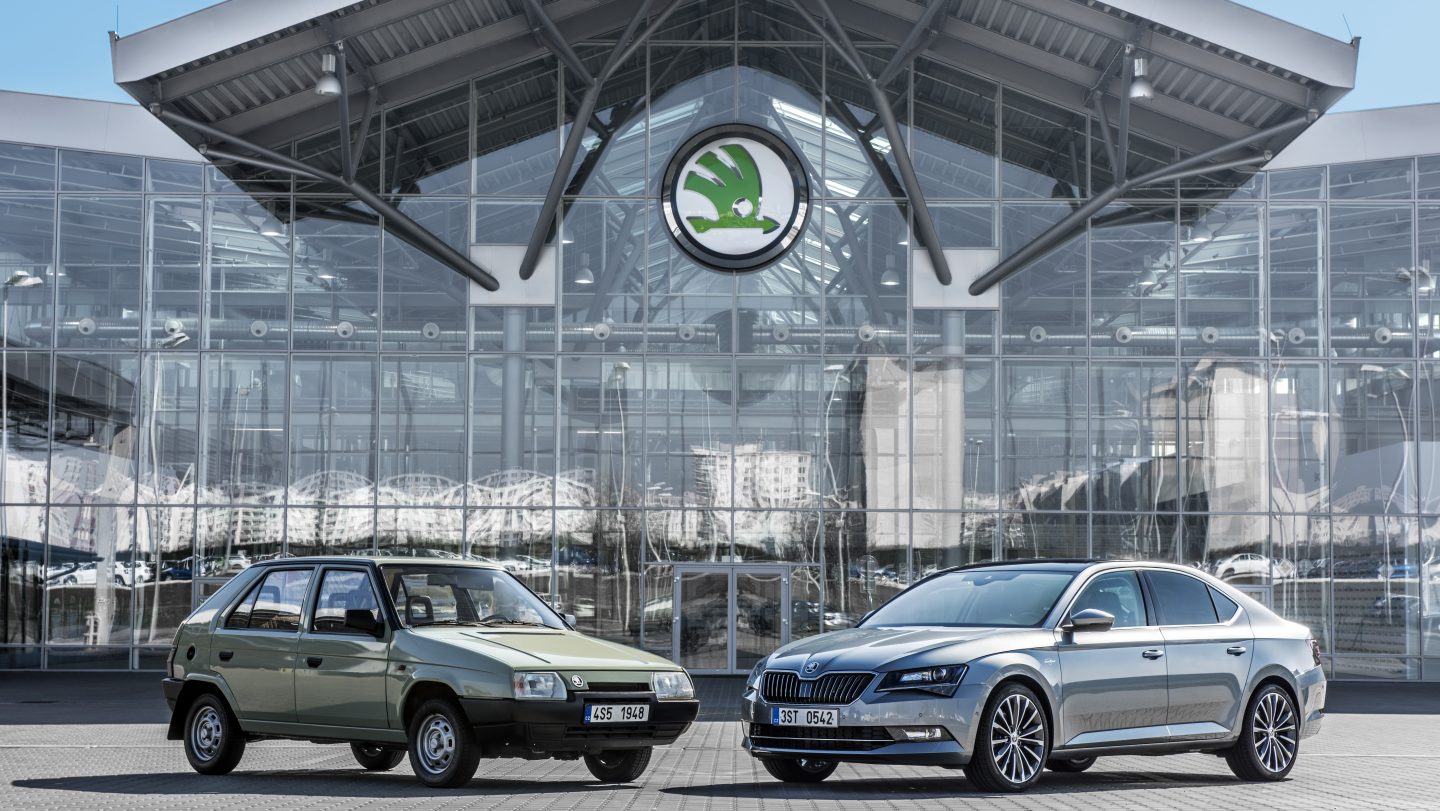 › Milestone in German-Czech economic history: ŠKODA has been part of Volkswagen Group for a quarter of a century
› 25 years of successful cooperation: development of a modern model range, sixfold increase in sales figures, high investments in development and production capacities
› Internationally successful: from regional market leader to an attractive brand in over 100 markets worldwide

Mladá Boleslav, 24 March 2016 – One of the most successful mergers in automotive history is celebrating its 25th anniversary in the coming days: on 28 March 1991, the contract was signed that made ‘ŠKODA, automobilová akciová společnost’ part of Volkswagen Group. The agreement came into force on 16 April 1991. Within a quarter of a century, the brand developed from a regional manufacturer into a dynamic car manufacturer of international calibre. Today, ŠKODA is producing more than one million vehicles per year and is present in over 100 markets worldwide. The widest model range in the company’s history is manufactured at 14 locations over two continents. In this anniversary year, the Czech car manufacturer begins a new model campaign in the SUV segment. 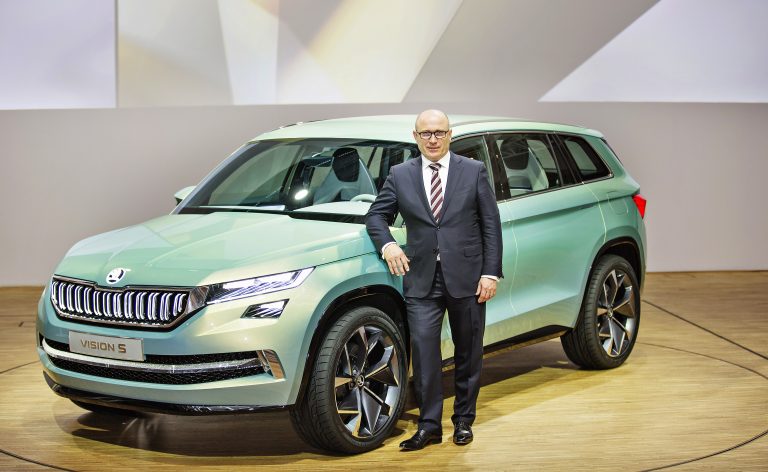 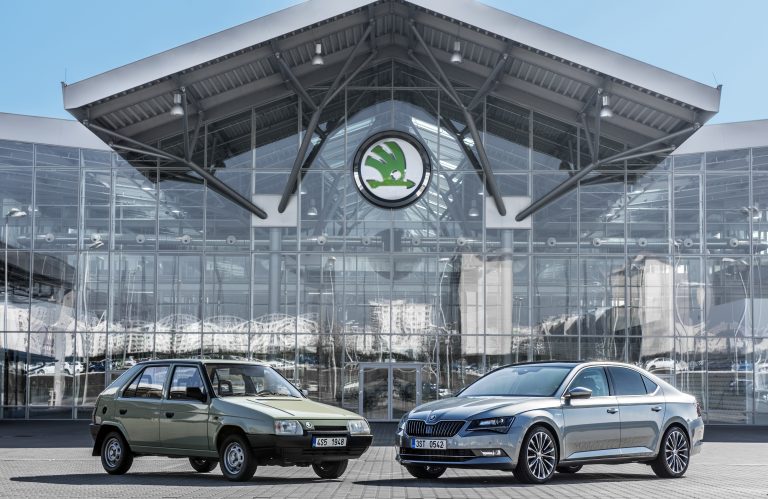 “In the last 25 years, ŠKODA has developed from a regional brand into an internationally successful car manufacturer. The decisive factors in that were the acquisition through Volkswagen Group a quarter of a century ago and the professional cooperation between ŠKODA and Volkswagen. Our brand’s success story is unique in the automotive industry,” said Bernhard Maier, CEO of ŠKODA.

The incorporation of ŠKODA into Volkswagen Group ranks among the most successful examples of privatisation of Czechoslovakian state-owned enterprises at the beginning of the 1990s. Production volume at that time was about 200,000 cars per year; the model range consisted of only two model lines – a soon-to-be-discontinued rear-engined model and the compact car Favorit, which was presented in 1987, including its estate version Forman. Today, ŠKODA offers an extensive model range: from the small car Citigo to the flagship, the ŠKODA Superb, and with a total of over 40 model variants.

Prior to the merger with Volkswagen Group, several car manufacturers from Western Europe and overseas expressed their interest in the long-established brand to the Czechoslovakian government; the brand was founded at the end of 1895 during the pioneering days of the automobile and thereby ranks among the longest-established car brands in the world. High-ranking, Czech economic and political representatives intervened in the sales negotiations and made a far-sighted decision: in 1991, ŠKODA was sold to Volkswagen Group.

Volkswagen – already by then the largest car producer in Europe – had expressed its sustained interest in the brand from Mladá Boleslav before. In 1987, the head of development, Petr Hrdlička presented a prototype of the new, front-wheel-drive ŠKODA Favorit in Wolfsburg and had it checked extensively by Volkswagen. Having detailed information about the new model and the knowledge of its potential made ŠKODA even more attractive from Volkswagen Group’s perspective. Another clincher was the Czech brand’s well-educated, creative and motivated staff. Craftsmanship and engineering expertise have always been strengths of the Czech people.

On 9 December 1990, the Czech government decided: Volkswagen Group will be ŠKODA’s strategic partner. On 28 March 1991, the then Czech Minister of Industry, Jan Vrba, and the CEO of Volkswagen at that time, Dr. Carl Hahn, signed the contract for the integration of the car manufacturer named ‘ŠKODA, automobilová akciová společnost’ into Volkswagen Group. On 16 April 1991, the document came into force, complemented by a capital contribution and the shareholders’ agreement. For a contribution of 620 million Deutschmarks over the course of 1991, Volkswagen Group at first acquired 31 per cent of the shares in the company from Mladá Boleslav. Gradually, the group increased its stake and became the sole owner of the stock company ŠKODA on 30 May 2000.

Over the last 25 years, the ŠKODA brand’s dynamic development was spurred on by a comprehensive investment programme, which was closely coordinated with other Group brands. Between 1991 and March 2016, ŠKODA has invested over 300 billion korunas (around 11 billion euros) in new models, research and development as well as in expanding production capacities in the Czech Republic. Furthermore, ŠKODA is the only manufacturer that not only produces cars in the Czech Republic, but also develops them there. ŠKODA’s development department consisted of 600 employees in the spring of 1991; today, around 2,000 highly qualified specialists are employed in the technology, development and design centre in Mladá Boleslav. They are responsible for designing high-quality cars with the typical ŠKODA advantages such as above-average space, great functionality and future-oriented technology. Following the incorporation of ŠKODA into the structures of Volkswagen Group, the production network of the three existing Czech ŠKODA sites in Mladá Boleslav, Kvasiny and Vrchlabí was supplemented by further capacities of Volkswagen Group in China, India, Russia and Slovakia. Assembly sites in Ukraine and Kazakhstan were also added.

The heart of the globally successful brand still beats in Mladá Boleslav. The company’s headquarters and main plant have been in the Bohemian town – about a 30-minute drive north of Prague – for 121 years. The town is one of the birthplaces of the European car industry, whose pioneers include Václav Laurin and Václav Klement. Inspired by motorised mobility on two and four wheels, the two men laid the foundation for the car company of today in 1895. Incidentally, they were contemporaries of Ferdinand Porsche, whose birthplace of Vratislavice is not far from Mladá Boleslav.

Today, ŠKODA is one of the essential pillars of the Czech economy: in 2014, the manufacturer alone generated 4.5 per cent of Czech gross domestic product and is responsible for around 8 per cent of all Czech exports. Many supplier companies with several thousand jobs are also a part of ŠKODA’s success story.

Whilst the home market remains significant for ŠKODA with 85,000 deliveries to customers in 2015, 92 per cent of the 1,055,500 cars delivered in 2015 were sold in other countries – evidence of ŠKODA’s global success. China has been ŠKODA’s biggest single market for some years. In 2015, the Czech brand delivered a total of 281,700 vehicles to customers there. In Germany, globally the second-largest sales market, ŠKODA has occupied the leading position as the most successful importer for seven years. In the highly competitive German passenger car market, the brand achieved a market share of 5.6 per cent last year with 158,700 deliveries. ŠKODA is currently recording double-digit sales increases in many countries.

The brand is paying particular attention to its staff and staff development. With around 28,500 employees today, ŠKODA ranks among the largest employers in the Czech Republic and regularly achieves the top positions in the rankings of the most attractive employers. The vocational school for mechanical engineering in Mladá Boleslav looks back on almost 90 years of tradition; around 22,000 apprentices have graduated during this time. Currently, almost 900 full-time apprentices are enrolled in 14 vocational courses. Around 100 employees are currently improving their existing qualifications with further training courses. 1,400 students have already successfully graduated from ŠKODA University which opened in Mladá Boleslav itself in 2000.

A quarter of a century after the new start under the umbrella of Volkswagen Group, ŠKODA is achieving new sales records: in 2015, deliveries grew by 1.8 percent to 1,055,500 cars (2014: 1,037,200). Sales revenue increased by 6.2 per cent to the new record figure of 12.5 billion euros (2014: 11.8 billion euros), operating profit grew by 12.0 per cent to 915 million euros (2014: 817 million euros). As of the end of February 2016, worldwide ŠKODA sales climbed by 4.5 per cent to 170,300 cars and with it, ŠKODA achieved a new record figure for the first two months of a year. This model example in the German-Czech economic history continues as a global success story. With the 25-year anniversary, the path shared by ŠKODA and Volkswagen Group is reaching a new milestone.

25 years of ŠKODA and Volkswagen

25 years of ŠKODA and Volkswagen