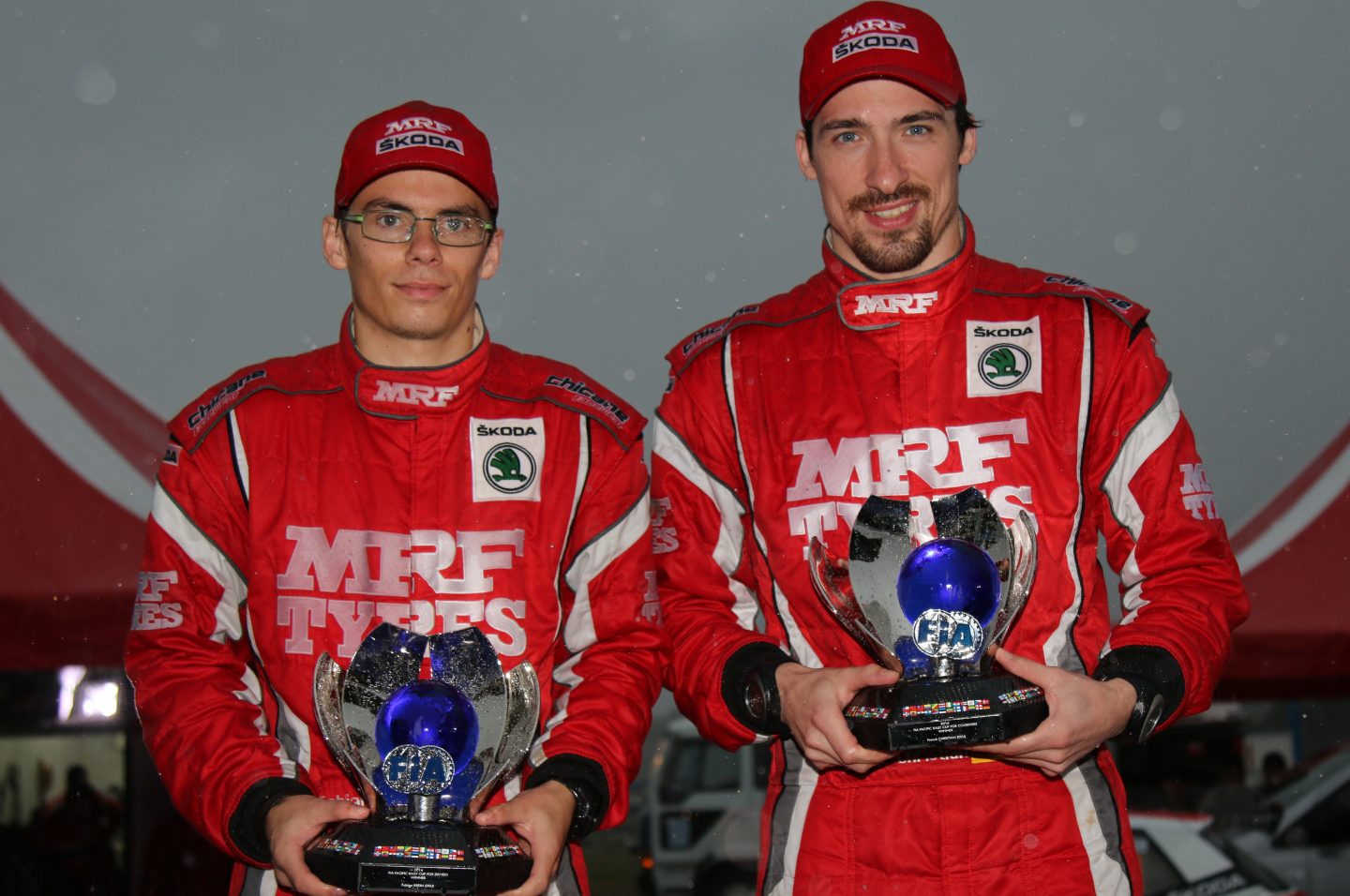 Imbil/Australia, 19th June 2016 – It was a wonderful rally weekend for ŠKODA: triumph at the Rally Hustopeče at home in the Czech Republic was followed by a one-two result at the Rally Queensland in Australia. Despite extremely difficult driving conditions, Gaurav Gill/Glenn Macneall (IND/AUS) and Fabian Kreim/Frank Christian (D/D) repeated their achievements from the season-opener in New Zealand, securing the top two positions for the brand at the second race on the FIA Asia-Pacific Rally Championship (APRC) calendar. The previous day, 15,500 kilometres away, the ŠKODA works duo Jan Kopecký/Pavel Dresler completed a hat-trick of wins in this year’s Czech Rally Championship (MČR). 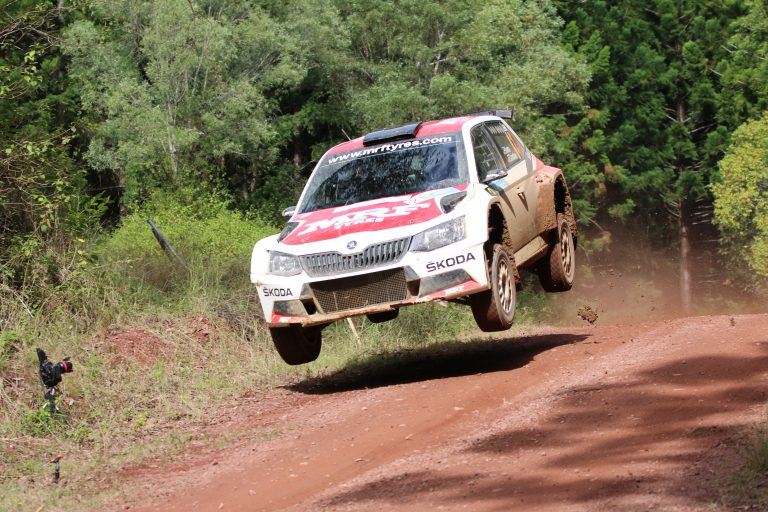 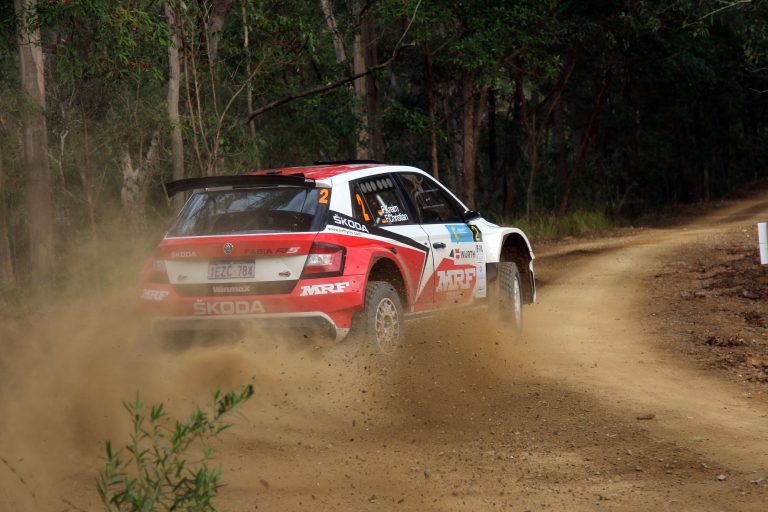 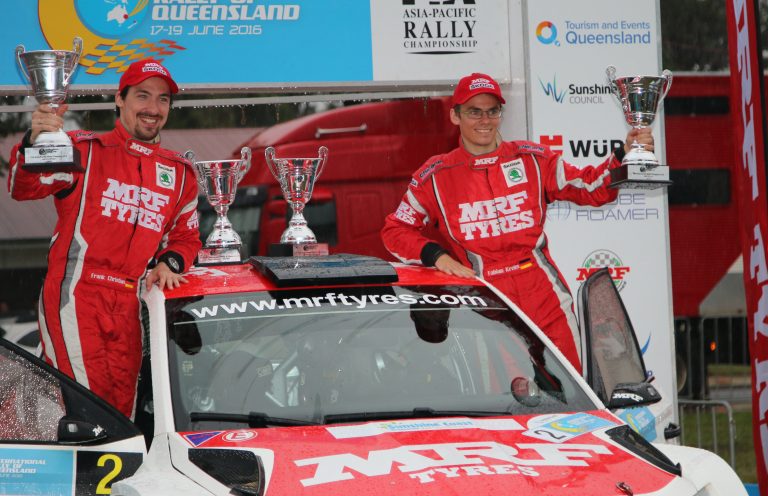 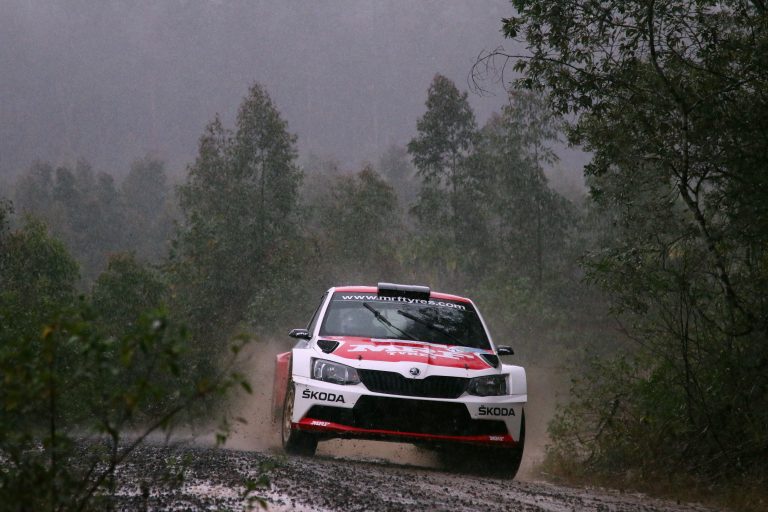 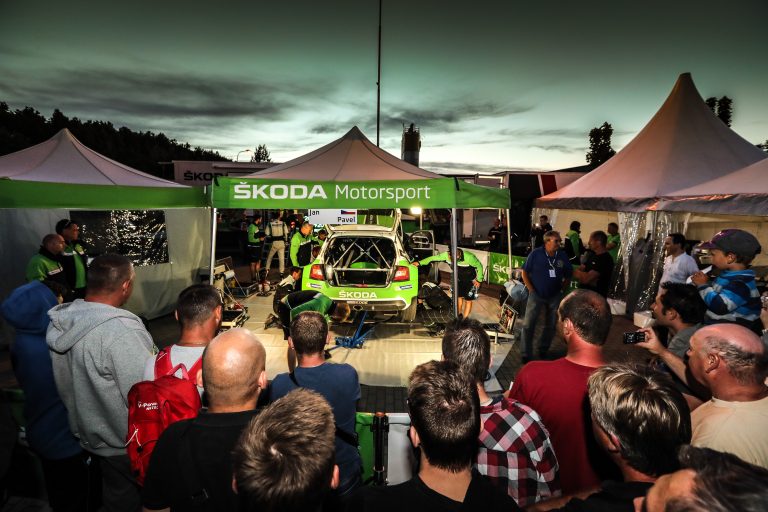 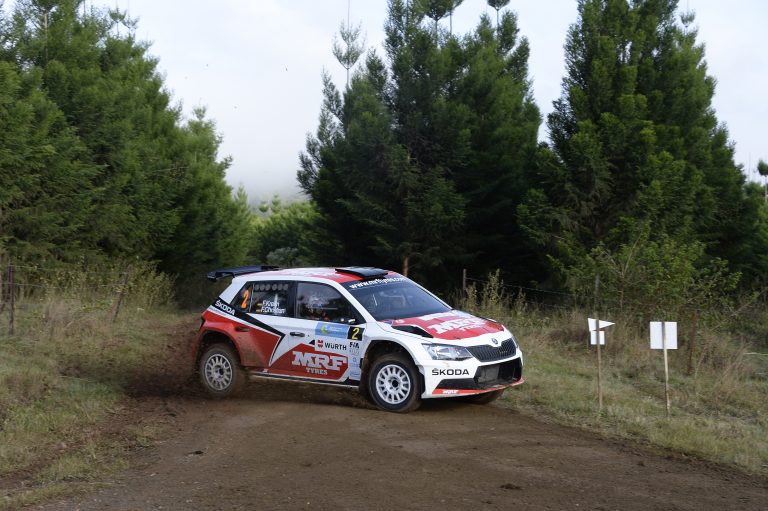 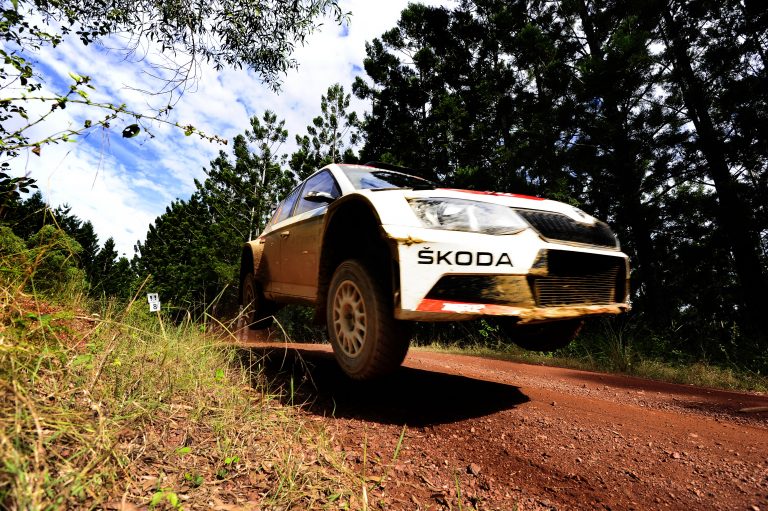 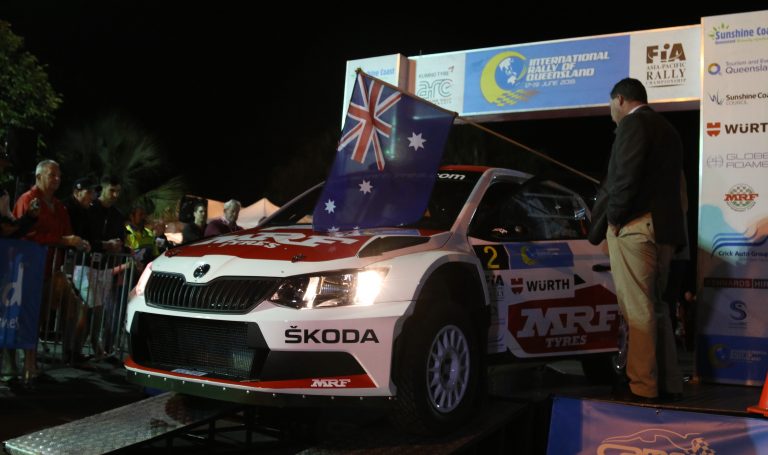 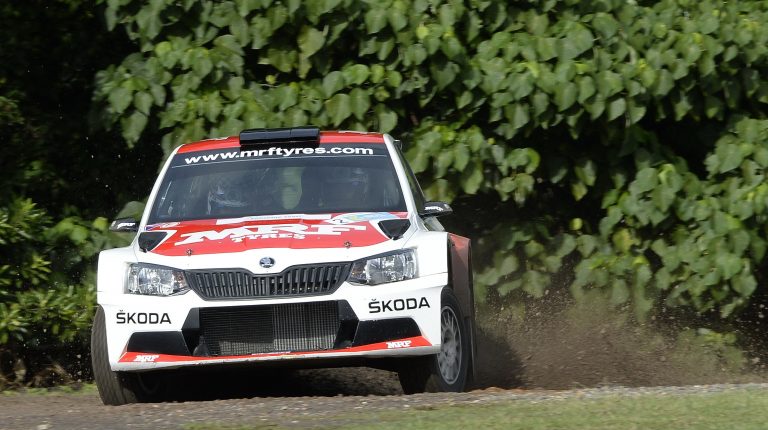 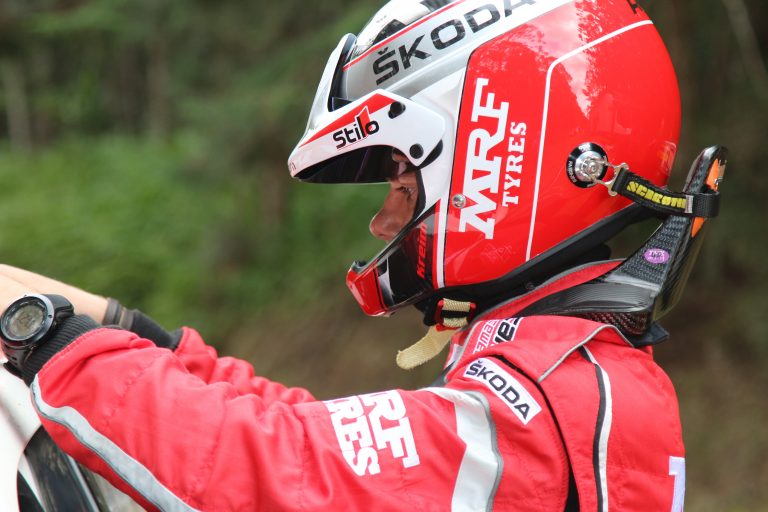 “I am proud of this rally weekend. In Australia, we were victorious on muddy gravel tracks and we also won on asphalt at our brand home in the Czech Republic. This shows that ŠKODA drivers, ŠKODA teams and the ŠKODA FABIA R5 can beat all sorts of challenges,” concluded Michal Hrabánek. The ŠKODA Motorsport Director praised the concentrated performance of the drivers from the ŠKODA MRF team in Australia: “Our youngster Fabian Kreim continued to progress at his second gravel rally and kept his nerve despite the wet and slippery conditions. Congratulations to Gaurav Gill, who claimed his second win of the season.”

At the rally near the Sunshine Coast, the drivers had to contend with very muddy stages after heavy rainfall. Conditions became so bad that four stages had to be cancelled on Sunday. “They call it the Sunshine Coast? The rain and mud made my second gravel rally even harder, especially as we were not familiar with the stages. So I am more than pleased with my second place in the APRC,” commented Kreim. The 23-year-old has only been competing in rallies since 2013, but he was able to hold off more experienced drivers on these stages, such as New Zealand’s Michael Young.

Experienced ŠKODA driver Gaurav Gill remained unchallenged in his FABIA R5. The 34-year-old took the lead in the first special stage and gradually extended his lead. Having repeated his performance from the season-opener in New Zealand, the Indian driver celebrated a dominant victory. This was the fifth win in a row for ŠKODA in the APRC championship at the Rally Queensland in Australia. In 2012, Australian Chris Atkinson triumphed for the first time in the FABIA SUPER 2000, which proved unbeatable in the years thereafter. Finland’s Esapekka Lappi won in 2013, Jan Kopecký (CZ) claimed victory in 2014, and Swedish driver Pontus Tidemand finished in first place last year. A sequence of success that has seen all three current ŠKODA Motorsport works drivers top the podium in Australia.

ŠKODA also has a good chance of securing the fifth consecutive APRC title, having extended the lead in the manufacturers’ standings. The top two in the drivers’ championship, Gill and Fabian Kreim, have also built up a lead over the competitions after two of the season’s six races. “My aim is to repeat my title win of 2013. Victory in Australia was an important step in that direction. It was extremely slippery but we found the right rhythm and our ŠKODA FABIA R5 remained fast and reliable to the finish, even in these extreme conditions.”

The next stop for the APRC is China, on 6 th th and 7th August. Fabian Kreim is in action again before this – on Friday and Saturday he will be competing at the Rally Stemweder Berg in the German Rally Championship, and one week later he will be racing at the Rally Bohemia in the Czech Rally Championship. The home race for ŠKODA takes place on 2nd and 3rd July, and will also feature this weekend’s victorious works duo Jan Kopecký/Pavel Dresler.

The number for the Rally Queensland: 13

The ŠKODA MRF team was the clear winner in the APRC championship at the Rally Queensland, with the two FABIA R5s recording the best times in all 13 special stages. Gaurav Gill won all eight special stages on Saturday, finishing fastest 11 times overall. Fabian Kreim claimed first place on two occasions in the APRC. Sixteen stages had been scheduled originally, but four had to be cancelled due to heavy rain on Sunday afternoon. Only one stage could take place, and that was shortened to 1.20 kilometres. 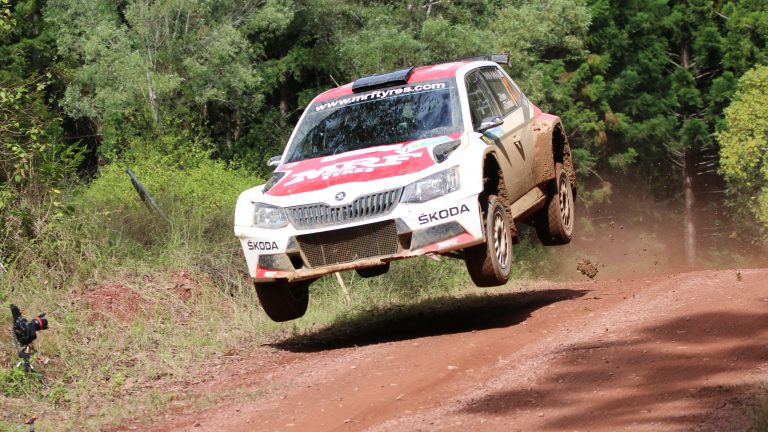