The growing demands placed on car safety make testing a bigger challenge as well. ŠKODA has its own state-of-the-art crash test lab. Take a look inside.

Crash testing has come a long way in the fifty years since it was first done in the Czech Republic. And ŠKODA has played a major part in this. Crash testing is now carried out in a state-of-the-art, modern laboratory at the test polygon in Úhelnice near Mladá Boleslav.

In the almost 200-metre-long hall ŠKODA can carry out an amazingly wide range of tests, from frontal crashes into solid obstacles, impacts when a barrier or pillar hits the side of a car and various rear impacts, to head-on collisions between two cars. 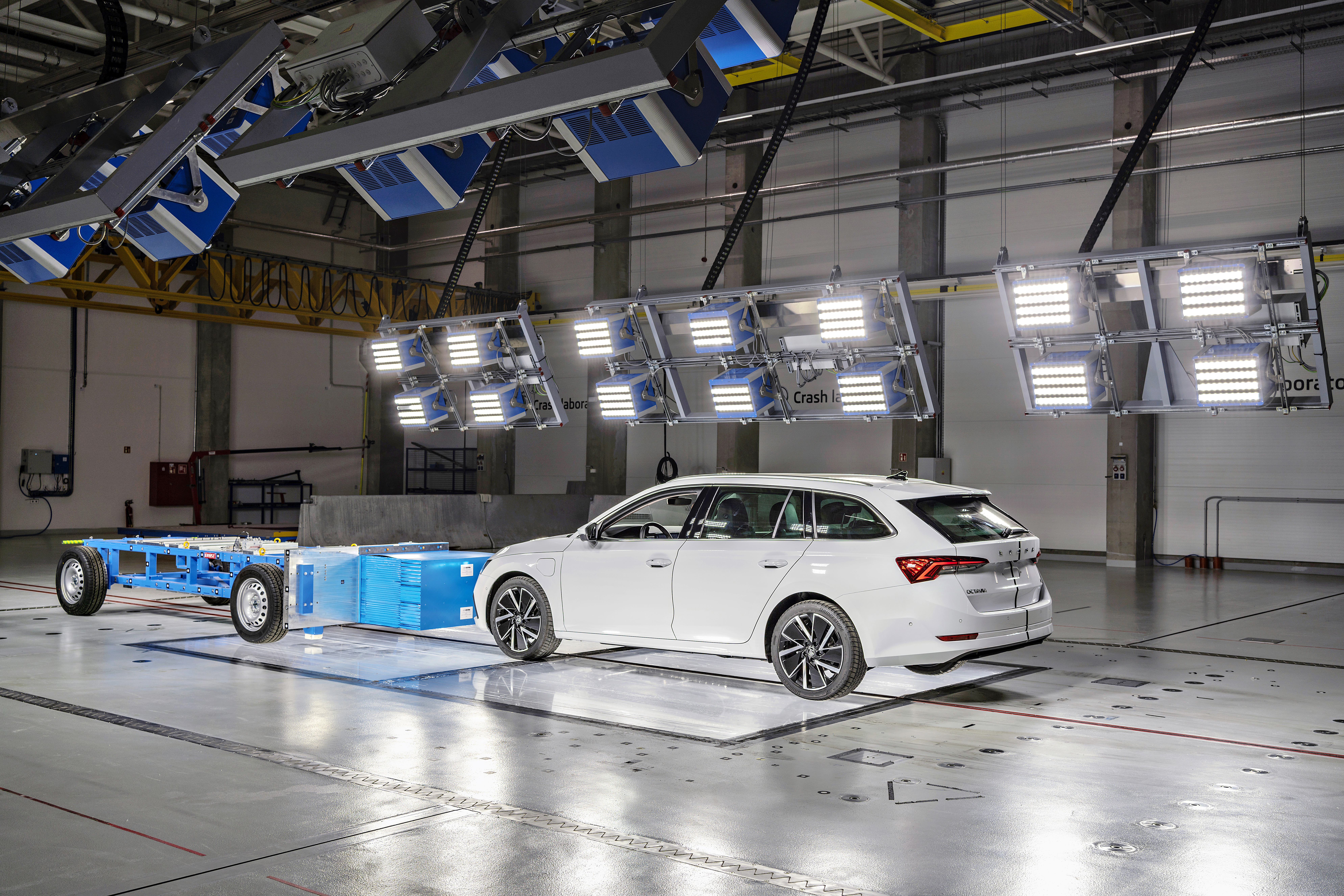 The crash track’s lighting system runs at 250 kW and can illuminate the car with up to 120 kilolux.

The cars are propelled by a 600 kW Messring drive system, which can accelerate two vehicles weighing up to 3.5 tonnes towards each other up to a speed of 65 km/h, or accelerate one vehicle to 120 km/h. In the first case a track of 80 metres is sufficient, in the second case the entire track is needed.

While the high power of the propulsion system is probably no great surprise, the power of the lighting system probably is. In fact, the array of lights illuminating the collision area above the filming pit has a power output of 250 kW and can generate a light output of up to 120 kilolux on the car itself. The reason for such intense lighting is obvious: the high-speed cameras really need to capture everything in the highest possible quality. There are up to twenty cameras in various positions in each test (some for photogrammetric reasons - these cameras track points on the vehicle). The lighting system only ramps up to full power when the vehicle is in motion, just before the actual crash. 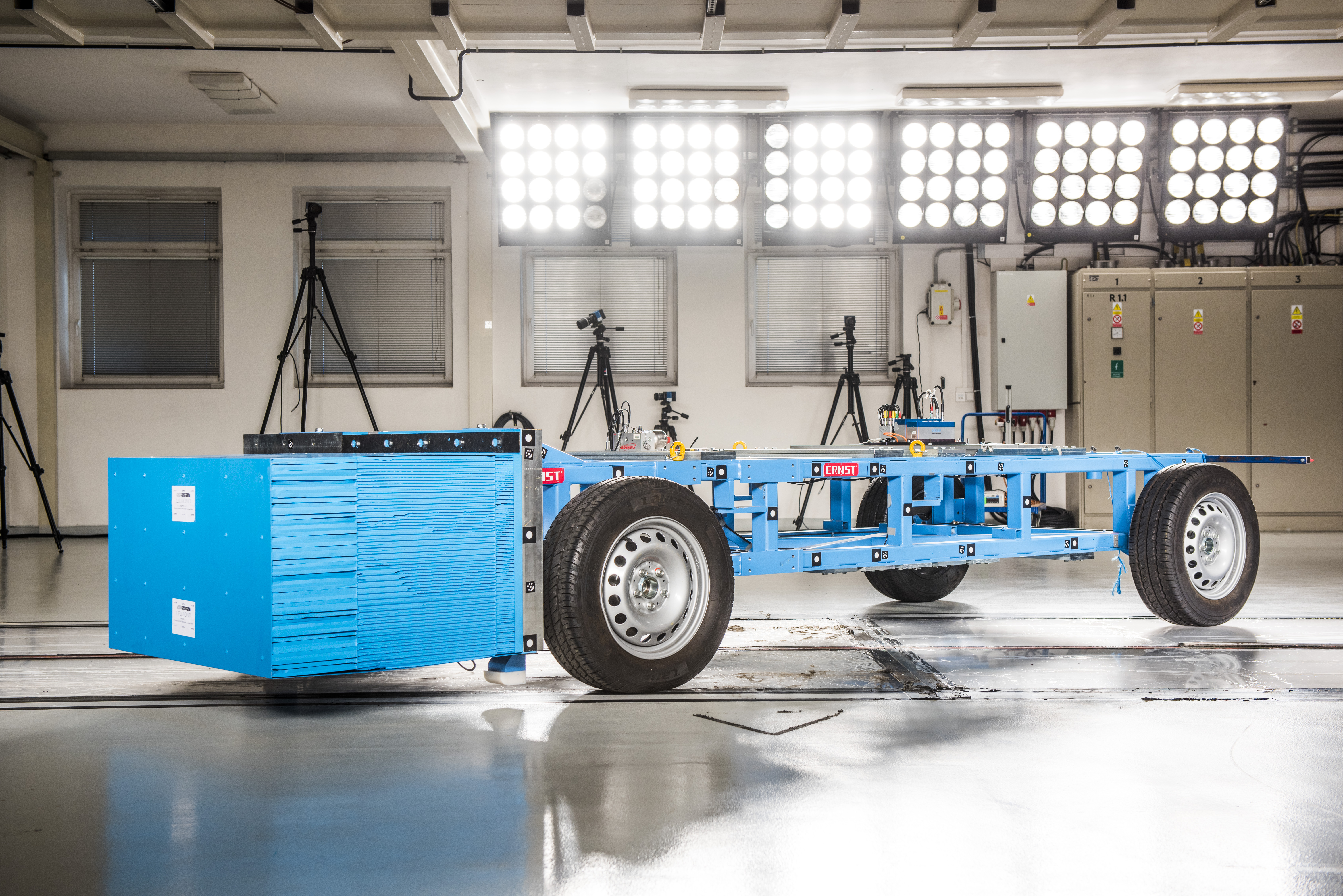 The trolley that crash test lab uses to simulate impacts.

“Today, of course, it’s all controlled automatically, but when I started here we still had conventional cine cameras and the start of the test and the activation of the cameras had to be coordinated manually. That was my job back in those days,” says Rudolf Tesárek, who witnessed huge progress in crash test filming technology as an employee and later coordinator of ŠKODA’s crash laboratory. The test itself is always really loud. “The airbag explosions are the most deafening noises, of course,” Tesárek explains.

ŠKODA has owned its crash test laboratory since 2011, and the Czech carmaker has invested massively in further equipment and development. As cars grew in size, so did the demands of crash testing: for example, the requirement to be able to collide test two moving objects into each other. There was a planned expansion of the lab in 2018 and 2019, but most of the operations in the original part of the lab went ahead during the work.  The first trial test took place in the new part of the hall on 1 February 2019, followed by a “live” test in March.

“In the original hall we removed the drive system, which was acquired by the Faculty of Transport of the Czech Technical University for a symbolic price, while the original hydraulic brake is now permanently encased in concrete,” says Rudolf Tesárek, describing the fate of some of the original laboratory’s technical fittings. A new laboratory for preparing dummies and other facilities were also built, and the final task was to unify the surface of both parts of the now shared hall. The installation of a mobile barrier helped to speed up test preparation and expand the use of the laboratory. In 2020, the ŠKODA Crash Laboratory was given the prestigious “Crash Test Laboratory of the Year” award by Automotive Testing Technology International.

Incidentally, crashed cars are stored, and not scrapped until much later, either when they lose their relevance because the model has entered a new development phase, so a new version of the prototype has been made, or after the stipulated length of time for which the car has to be preserved for homologation purposes (this period is longer). Simply put, a car company can scrap cars from its “working” crash tests at its discretion, but cars from homologation tests have to be stored so that the results can be confirmed. Of course, all the data collected during the tests is also stored – whether that is camera footage or data collected from the dozens of sensors that the car and crash test dummies are fitted with. 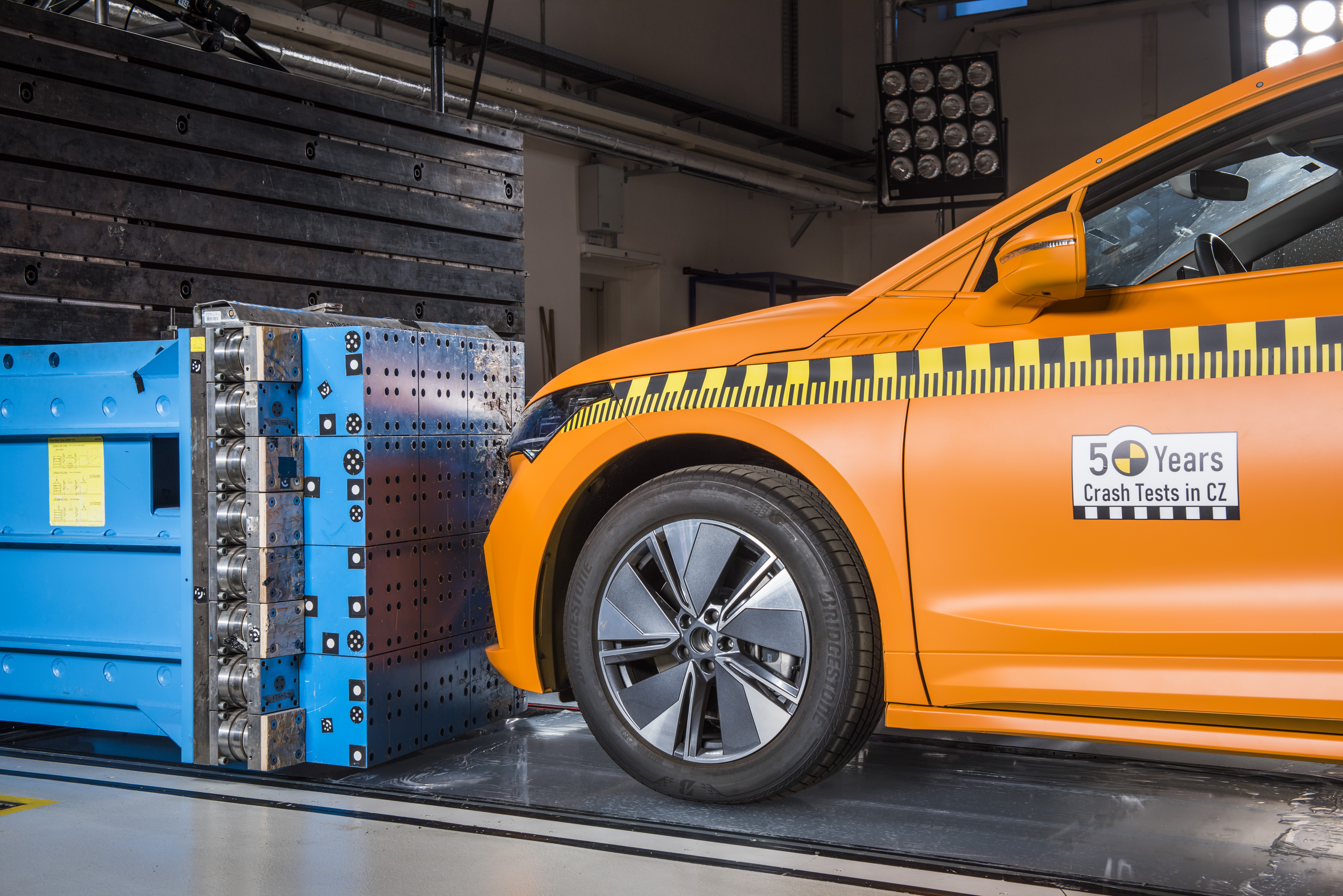 The most deafening noise doesn’t come from a frontal collision with an obstacle but from the airbags firing.

Needless to say, an advanced laboratory tests not only according to homologation requirements, but also according to the far more demanding conditions of various organisations such as the various NCAP associations (Euro, China, US?…) or the North American NHTSA. “We can perform virtually all the demanding modern tests here,” says Tesárek. 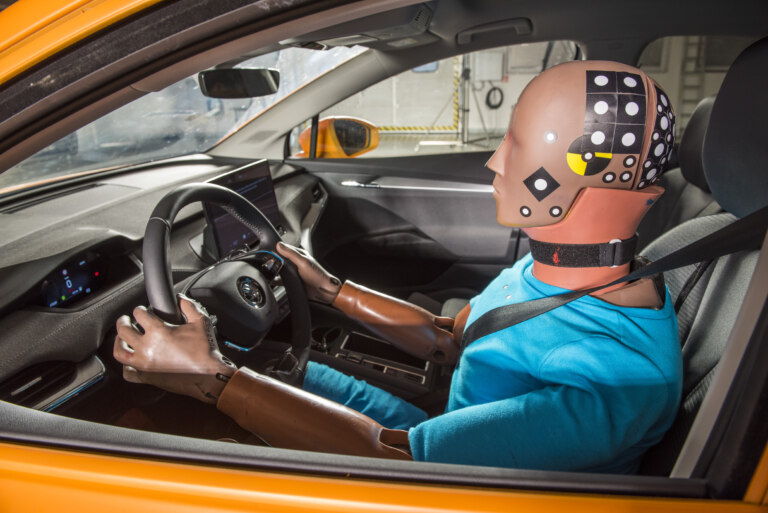 There’s even a new lab for preparing crash test dummies. 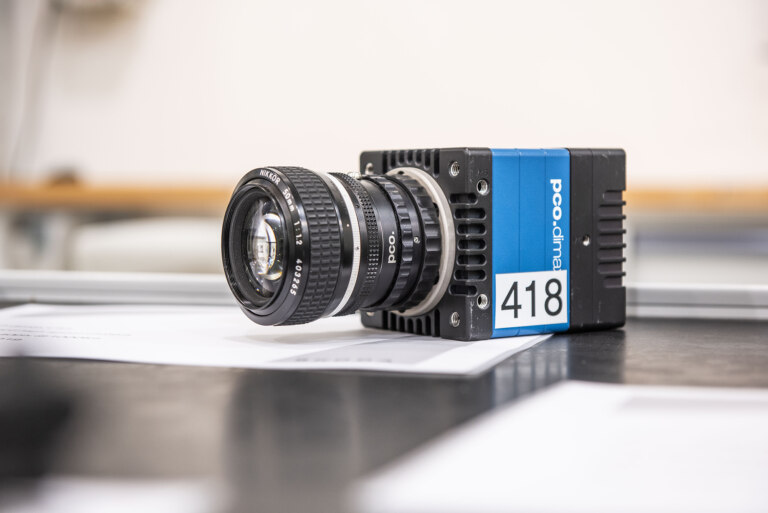 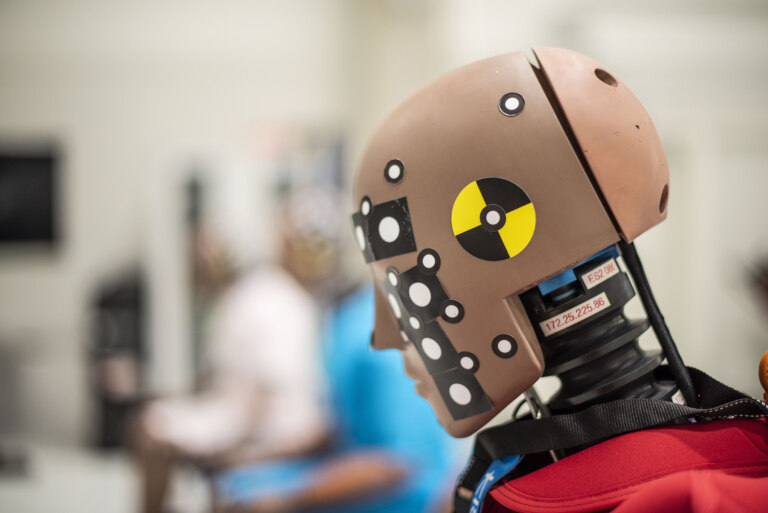 Close-up of a crash test dummy 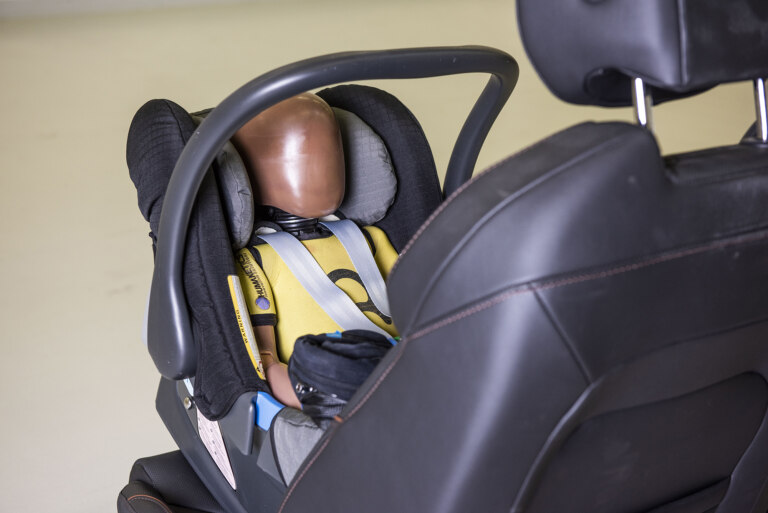 Dummy in a child seat

ŠKODA carries out a number of crash tests in its crash laboratory, most of them during the development of a car to verify the functionality of its design. However, it also carries out tests for homologation purposes and to verify crash tests according to Euro NCAP parameters. Here are some examples of the tests they carry out in the laboratory.

A MODERN CRASH TEST LAB CAN HANDLE ALL KINDS OF TESTS 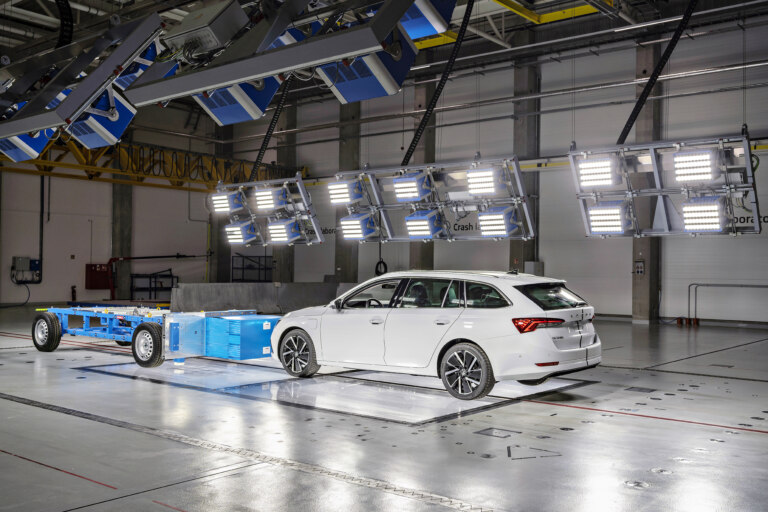 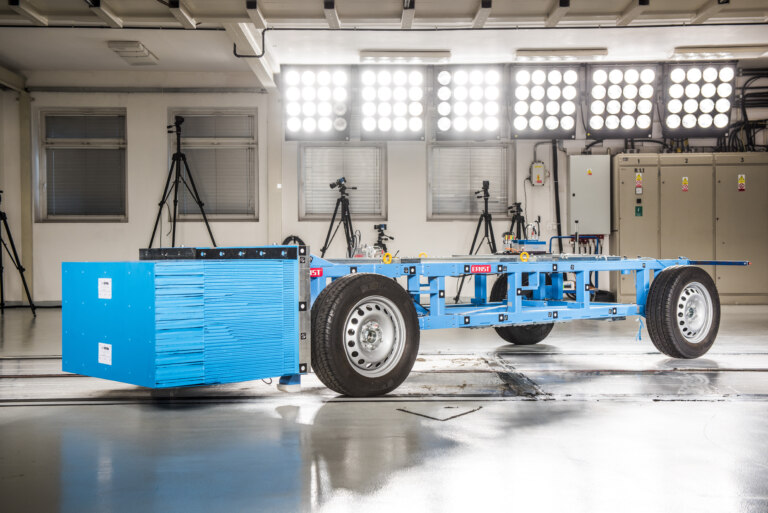 The trolley that crash test lab uses to simulate impacts. 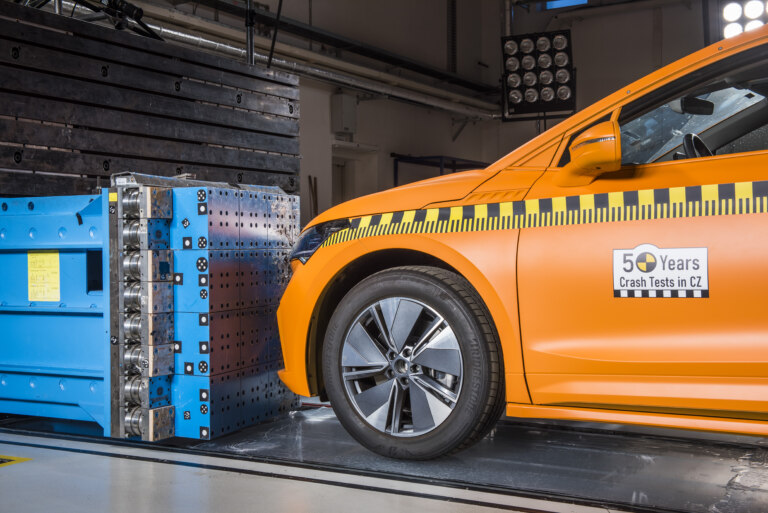 The most deafening noise doesn’t come from a collision but from the airbags firing.

There’s even a new lab for preparing crash test dummies.

Close-up of a crash test dummy

Dummy in a child seat