The seventh year of the AZUBI student project is nearing the finish line. The upshot is the SLAVIA, a sporty spider inspired by the ŠKODA 1100 OHC racing prototype and referencing the carmaker’s 125th birthday.

Twenty-six boys and five girls from the ŠKODA Academy took part in this year’s AZUBI project, an annual project to make a concept car based on one of the brand’s mass-produced models. This year’s creation additionally links the present and the past: the open-top concept given the name SLAVIA joins in this year’s celebrations of the anniversary of ŠKODA’s founding by referencing the name of the first bicycles made by Václav Laurin and Václav Klement after the firm was founded in 1895.

The prototype derived from the SCALA model combines a fresh, modern and striking design with the traditional hallmark of the early days of motoring, when most cars were open-top.

Like the SCALA, the students’ spider offers precise lines and sharply defined edges that give it an exciting, sporty look. Weighing in at 1,210 kilos, the car’s dynamism is guaranteed by a four-cylinder 1.5 litre TSI spark-ignition engine, which delivers a maximum output of 110 kilowatts (150 horsepower) to the wheels via a seven-speed DSG gearbox. Other features taken from the SCALA include both axles, the steering system, the complete electrics, including cabling, and assistance systems. The instrument panel, virtual cockpit and infotainment system are also identical, but the interior’s ambient lighting is an innovated feature.

‘The construction of a student concept car is a core project of the academy every year. This is the seventh time in a row that the students have shown how high our company academy’s bar is set – from planning and design to the construction of an exciting concept car. We give them the chance to design this car of their dreams and get a taste of what it’s like to work with professionals from the company’s departments. One outcome of this is that they get an insight into the company’s workings while they are still students. Later, when they leave school and begin their career with us, they can put that to good use,’ says Alois Kauer, who took charge of the ŠKODA Academy in February this year.

The students’ inspiration for creating a spider came from the ŠKODA 1100 OHC racing car from 1957. Originally, two units were made as a coupé and two as an open-top spider (and later one more by assembly from parts) especially for endurance races. The spider’s body was made of fibreglass (the coupé was aluminium), which helped keep its weight down to just 550 kilos. This allowed the car to reach a top speed of 190 km/h. The 1.1 litre engine with a 70-kilowatt output was derived from the ŠKODA 1101 unit, except that it was modified with two carburettors, an aluminium cylinder head and a dual overhead camshaft.

See the interior of the ŠKODA SLAVIA in a 360° photo:

It was these modifications that inspired the students to transform a ŠKODA SCALA into the open-top SLAVIA – they reinforced the car’s base, modified the exhaust system, removed the roof and welded the rear doors shut. This turned a compact hatchback with plenty of room for five people into an orthodox and uncompromising two-seater sports car. Also worth mentioning are the two characteristic ‘humps’ behind the seats that transition into a brand new boot cover with an integrated spoiler. The designers paid special attention to the smooth transitions between A-pillars and doors. The car’s sporty looks are enhanced by twenty-inch rims taken from the ŠKODA KODIAQ RS.

Other features that stand out are the body’s three-layer white paint job with its striking mother-of-pearl effect and the programmable LED segments beneath the side sills and behind the wheels – their lights can be controlled to switch between blue, red and white, the colours of the Czech flag. Equally distinctive is the ŠKODA inscription on the prototype’s boot cover, which glows red as standard but switches to white when reversing.

Interesting interior features include the SPARCO sports seat with four-point harnesses and the 320-watt audio system that even has a 2250-watt subwoofer. And a surprise lies in wait in the luggage compartment, where the designers included two ŠKODA folding electric kick scooters. 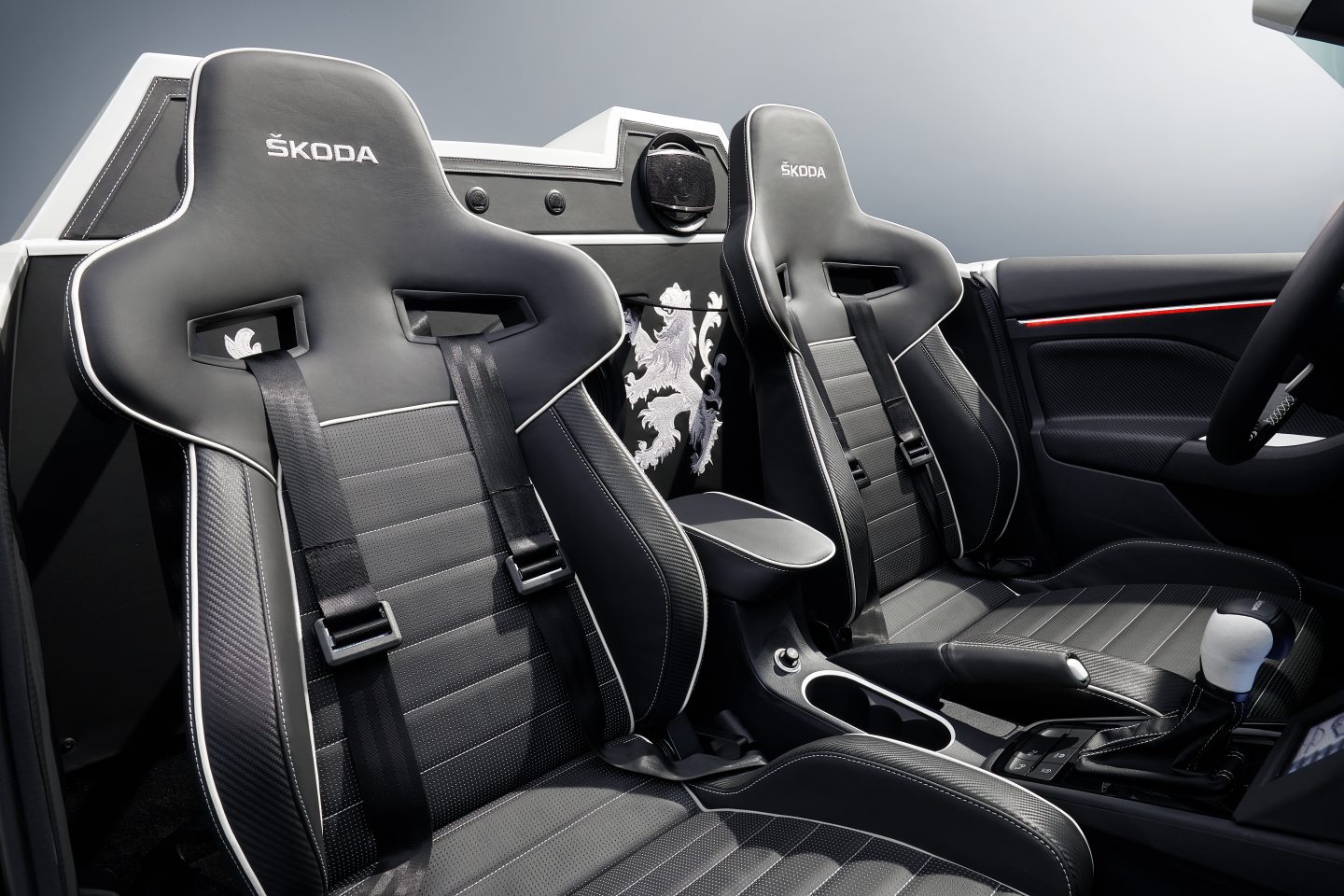 ‘This project gives the students a unique opportunity to try out firsthand what building a new car involves, from the first sketches on paper to putting together the actual concept. The students do everything themselves, but with a lot of invaluable support from their teachers and experts from the company’s design, production and technical development departments. This year’s project, the seventh, provides impressive proof of our academy’s high tuition standard. For the students it is an amazing experience that will certainly help them in their careers,’ concludes Bohdan Wojnar, ŠKODA board member responsible for human resources.

You can find more about the ŠKODA SLAVIA student spider here. 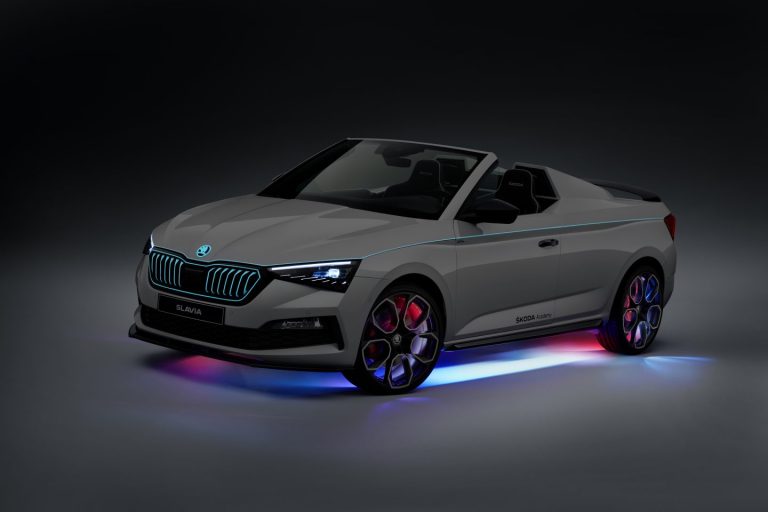 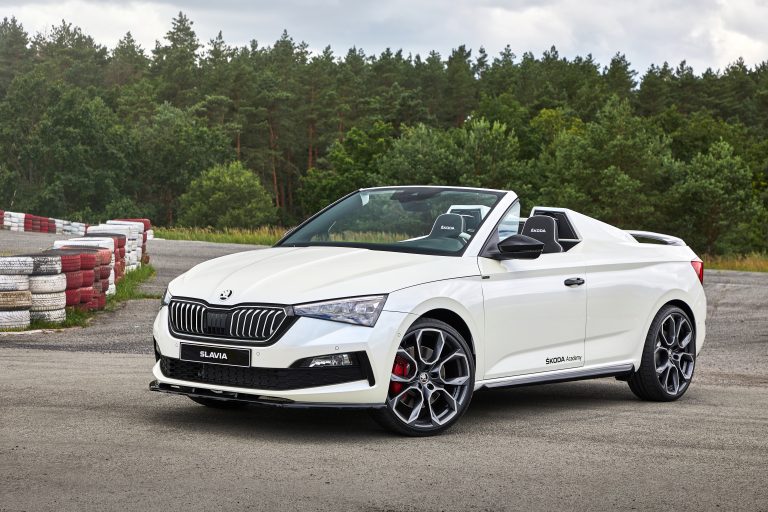 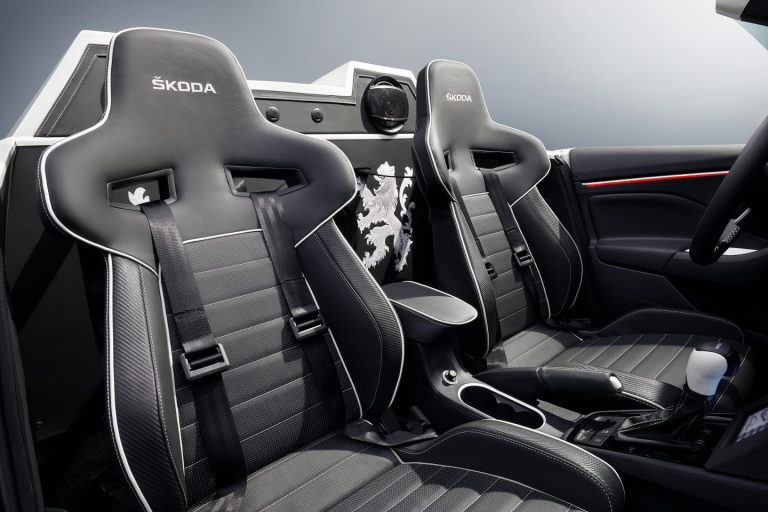 Sporty highlights in the interior 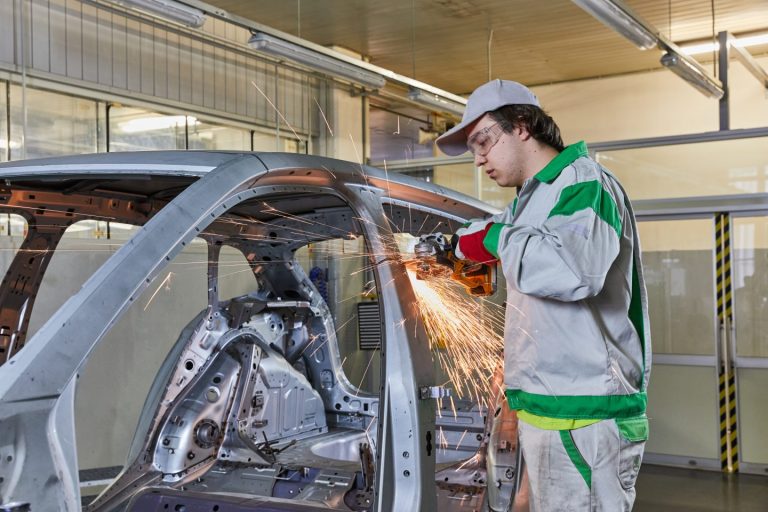 The hatchback turns into an open spider

Engine with an output of 150 PS 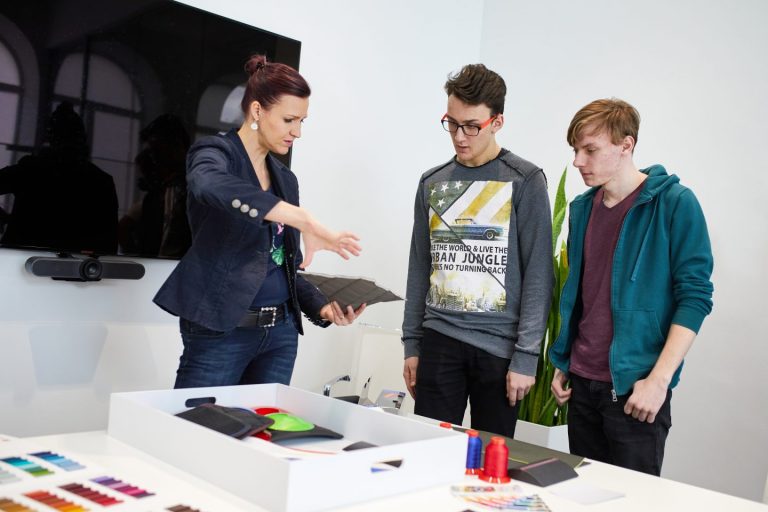 The students won over the professionals with their enthusiasm and receptiveness 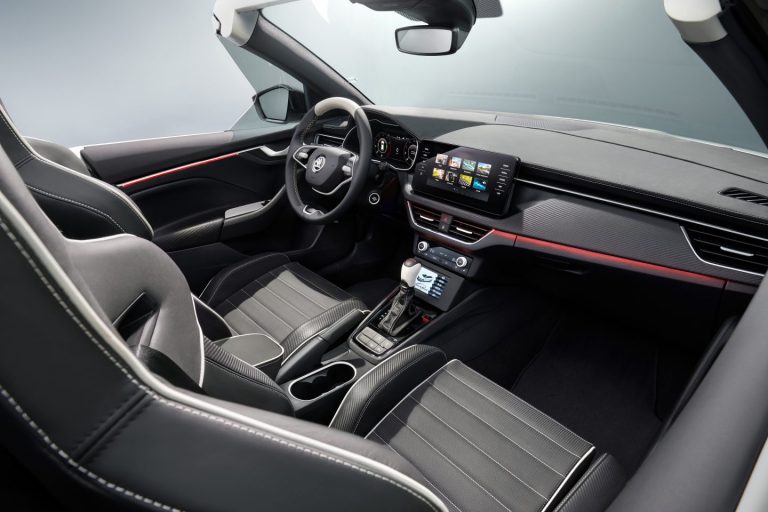 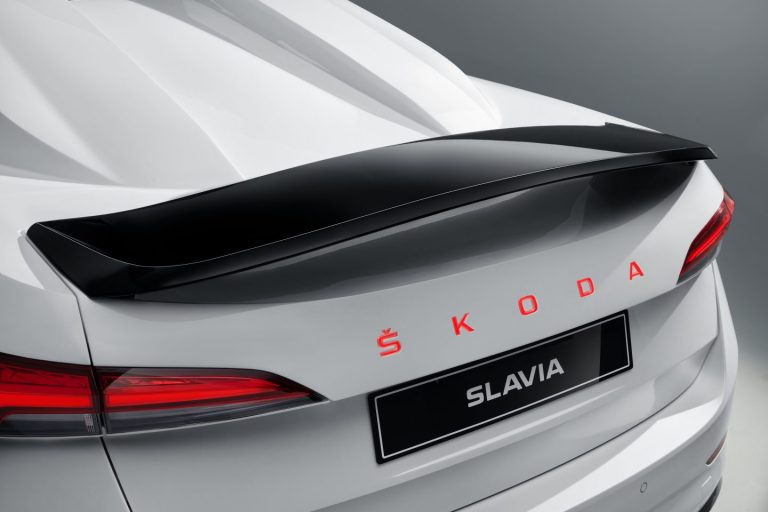 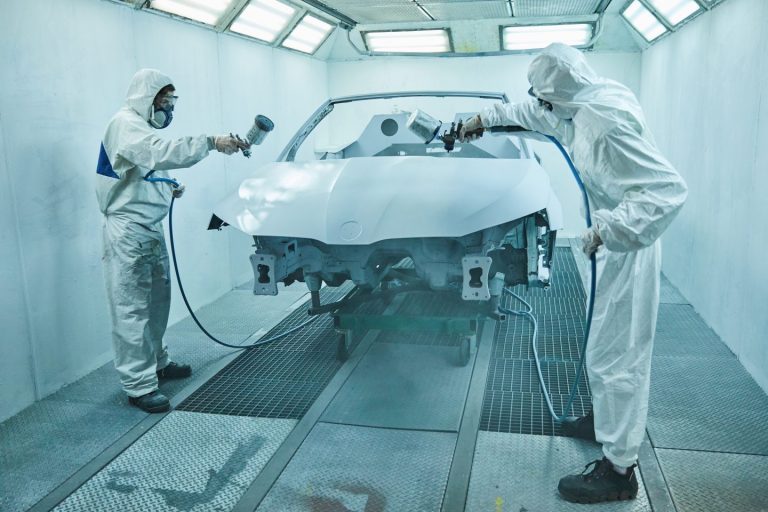 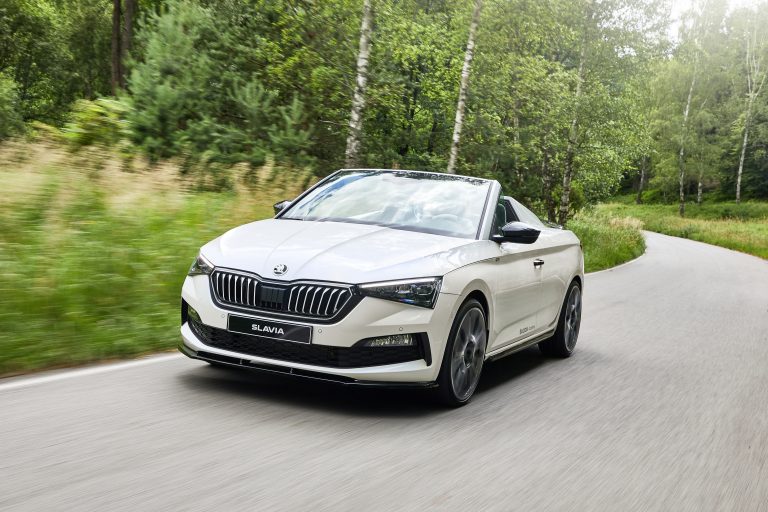