How have people protected their property against theft since time immemorial? With locks. And cars are no different. See how this little contraption has developed in the past few years – from classic old locks to today’s keyless systems.

For a long time, you got into your car by turning a key in the door lock. Gradually, though, the need to insert a key into the lock disappeared. The first remote control systems arrived, first with two buttons for locking and unlocking, and later with a separate button for only opening the boot. The key no longer tore a hole in your pocket: the metal part folded away into its handle, but you still had to insert it into the ignition to start the engine. Next came keyless systems that let you open your car and start the engine without having to take the key out of your pocket. 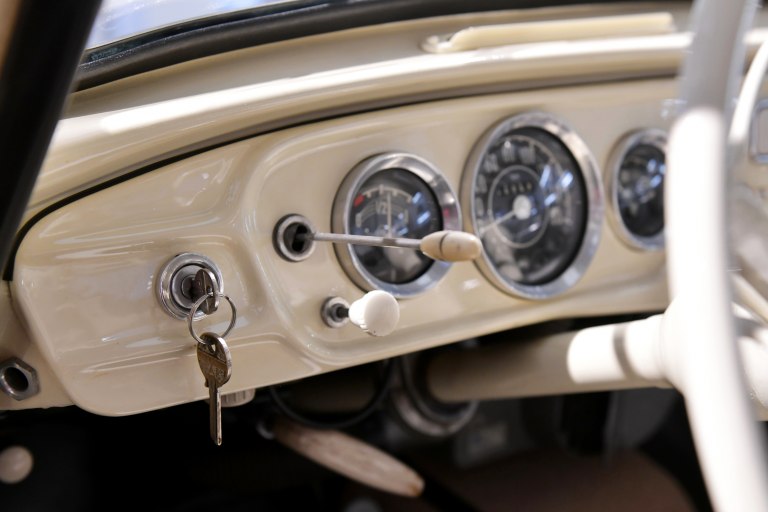 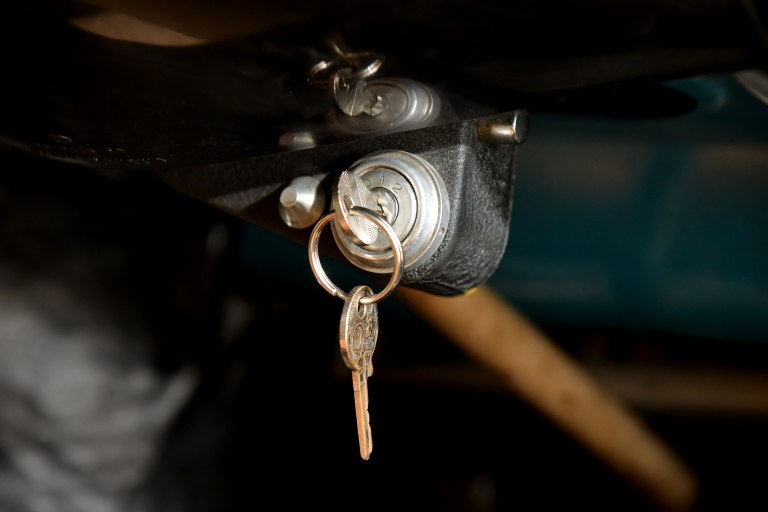 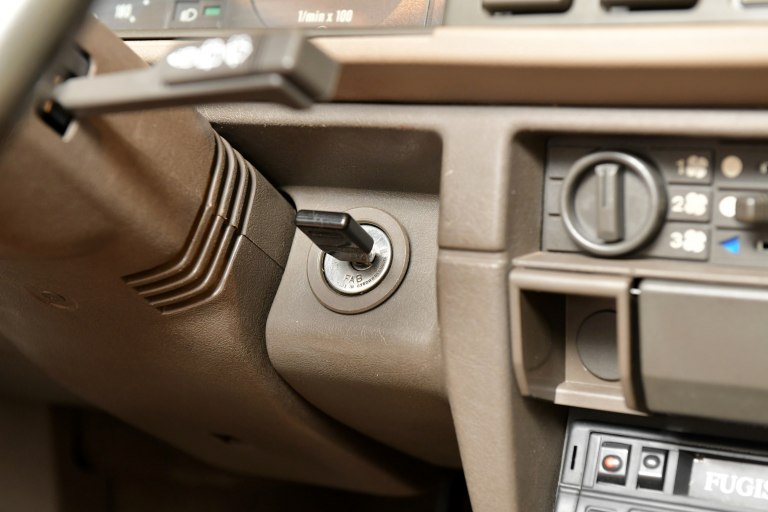 The Nineties: key for a ŠKODA FAVORIT

“What hasn’t changed in keys is a shaft with milled profile contours, either in the old-fashioned way on the outside or these days inside the shaft, which is inserted into the key module as a standby if the key’s battery or the car’s battery runs out and the car cannot be unlocked remotely. Even though it is no longer visible from the outside, every ŠKODA also has a classic mechanical lock cylinder in the driver’s door,” says Petr Jirásko from the Side Door and Rear Lid Mechanisms Development Department, adding that the time is not far off when even emergency unlocking will be handled purely electrically.

The bell is therefore tolling for physical keys in cars. It generally applies, in fact, the absence of mechanical unlocking means greater protection against theft – no lock cylinder equals a better-protected car. To unlock or lock a door with this system, you need to switch the lock from the locked position to the unlocked position and vice versa. Unlike physically turning a key in a lock, when unlocking remotely the door control unit receives a signal from the key and sends a command to the key motor to unlock or lock.

What if you approach your car and it won’t unlock?

The battery in the key is probably dead. Then you need to slide out the backup key blade and use it to unlock the driver's door mechanically. But then how do you start the engine? This is all described in the car's manual. In older keyless systems, you hold the key  next to the engine start button; in newer cars the place is in the cup holder. The key has a coil inside it which the car uses to verify that it is the right one, and and the engine starts. The key doesn't need any electricity to do this, so the engine can be started even when the key's battery is completely drained. It’s worse if the car doesn't unlock because the car battery is dead. Then there is no choice but to mechanically open the driver's door as described and recharge the battery.

The future is keyless

Modern keyless entry systems are where it’s at today. There are two generations of these in ŠKODA cars today. 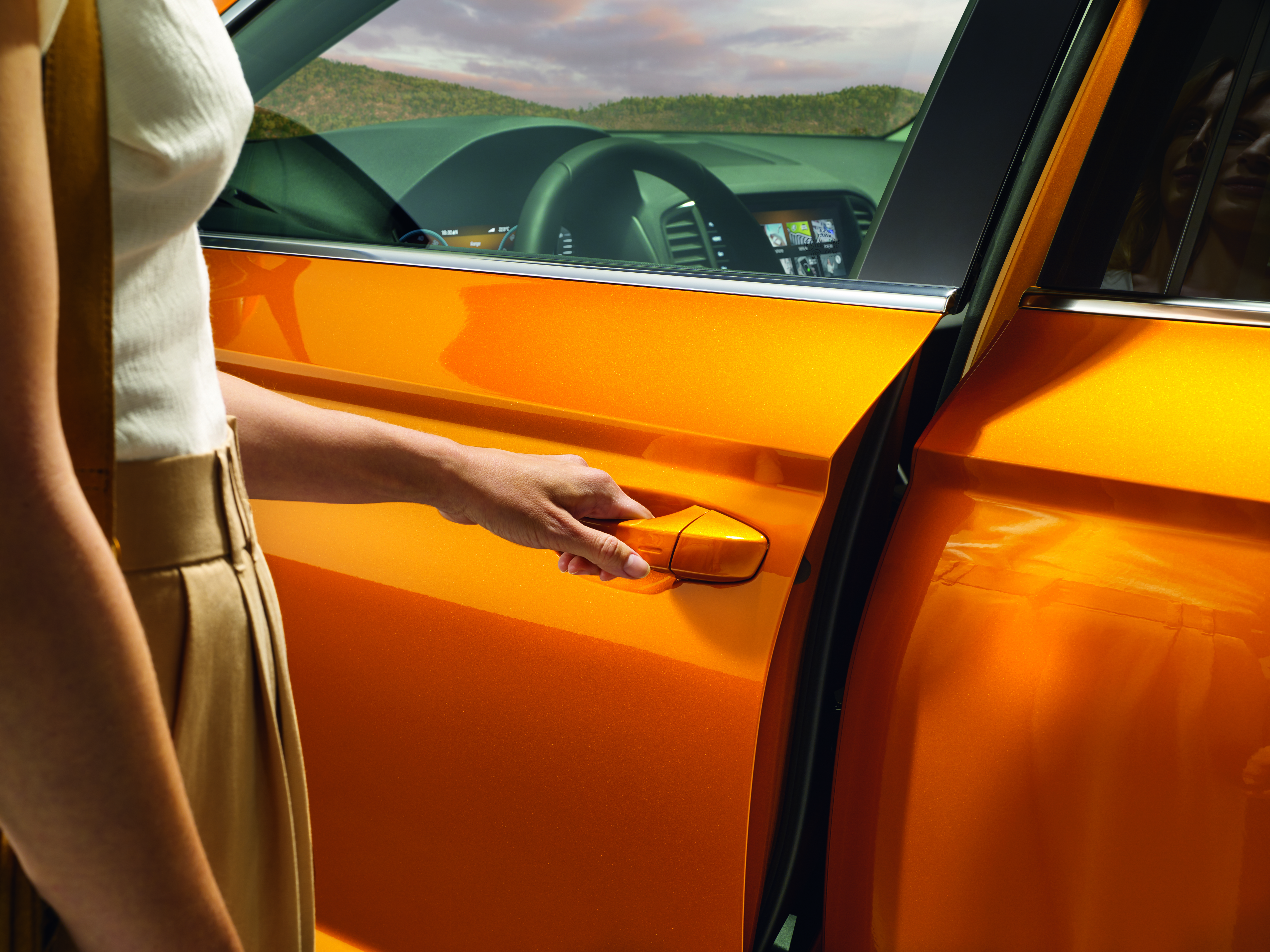 The KESSY keyless system lets you lock and unlock a car without using a key. All you have to do is grab the front door handle, which has a touch sensor on its car-facing side.

“In the older ones, the communication works as follows: the person with the key approaches the car, which is waiting for a trigger, typically the insertion of the fingers into the handle space or the pressing of the boot release button. A sensor in the handle sends a request to the control unit, which tells the antennas to search the area around the car’s surroundings for the key. These antennas deliberately do not have a long range and are for that reason housed in the two front doors. If the key is within their range, the antennas pick it up and send a positive response back to the control unit in the dashboard. And that unlocks the car,” says Zdeněk Říha from the Body Electronics and Architecture Department.

The newer generations of keyless unlocking – now supplied with the fourth-generation ŠKODA OCTAVIA and ENYAQ iV – also offer an automatic unlock function. If the function is activated and the key comes within approximately one metre of the car, the door unlocks. The system actively scans its surroundings – the antennas send out a signal cyclically and as soon as it detects the “right” key, it communicates with the key and, once verified, the car is unlocked or the “welcome” lights are switched on, if set up.

Those of you with long memories will remember the key for the first-generation ŠKODA OCTAVIA, which included a small light bulb that could be used for illumination when you pressed a button. And the history of ŠKODA keys features one more curiosity: buyers of the first-generation SUPERB could get both a standard key and an all-plastic emergency key. “That key was fully waterproof and could both unlock the car and start the engine. People kept demanding it as long as it was one of the available spares. They liked it and it was practical, say in summer when you were wearing swimming trunks,” says Petr Jirásko. 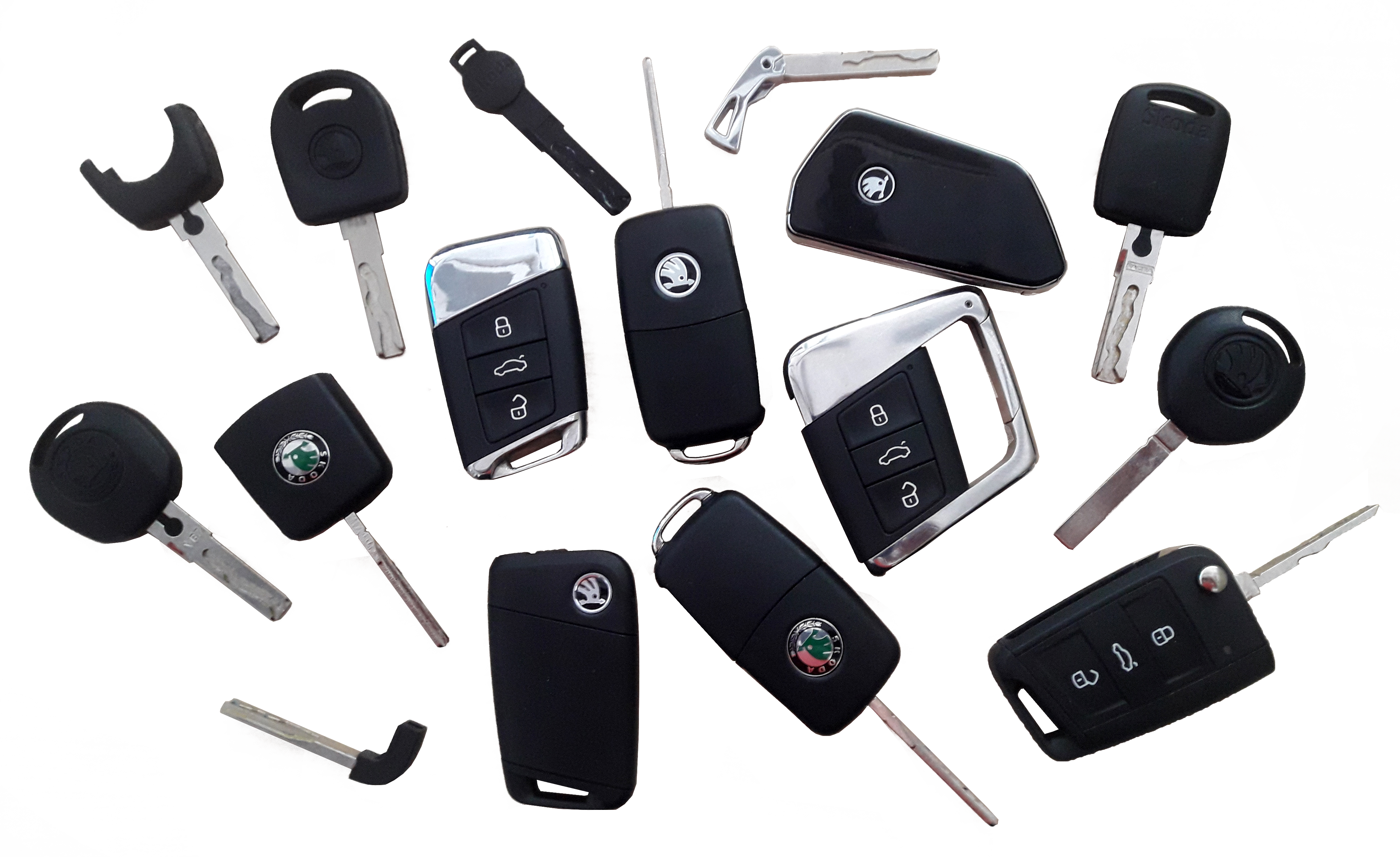 Self-starting as well as self-unlocking

The boot can be opened in a similar way using the Virtual Pedal: you hold out your foot under the rear bumper, the sensor picks up the request and requests verification that the key is present. The boot then unlocks and opens itself.

A "virtual pedal" lets you open the luggage compartment hands-free, thanks to a motion sensor under the rear bumper.

Once the driver is inside the car and wants to start the engine, the key’s presence is checked again. “The requirement in this case is to press the start/stop button. The ENYAQ iV already has a newer version of this system that eliminates the need to press the button. The trigger in this case is moving the gear selector to position D. But several conditions must be met: the driver’s seat must be occupied, the driver’s seat belt must be fastened and the brake must be applied, of course. Similarly, there is no need to switch off the car - unbuckling the seat belt and moving the selector lever to position P switches off the engine. For the time being, though, the car does not lock itself when you leave it with the key in your pocket – this function is being tested right now and is planned for the future,” Říha adds. 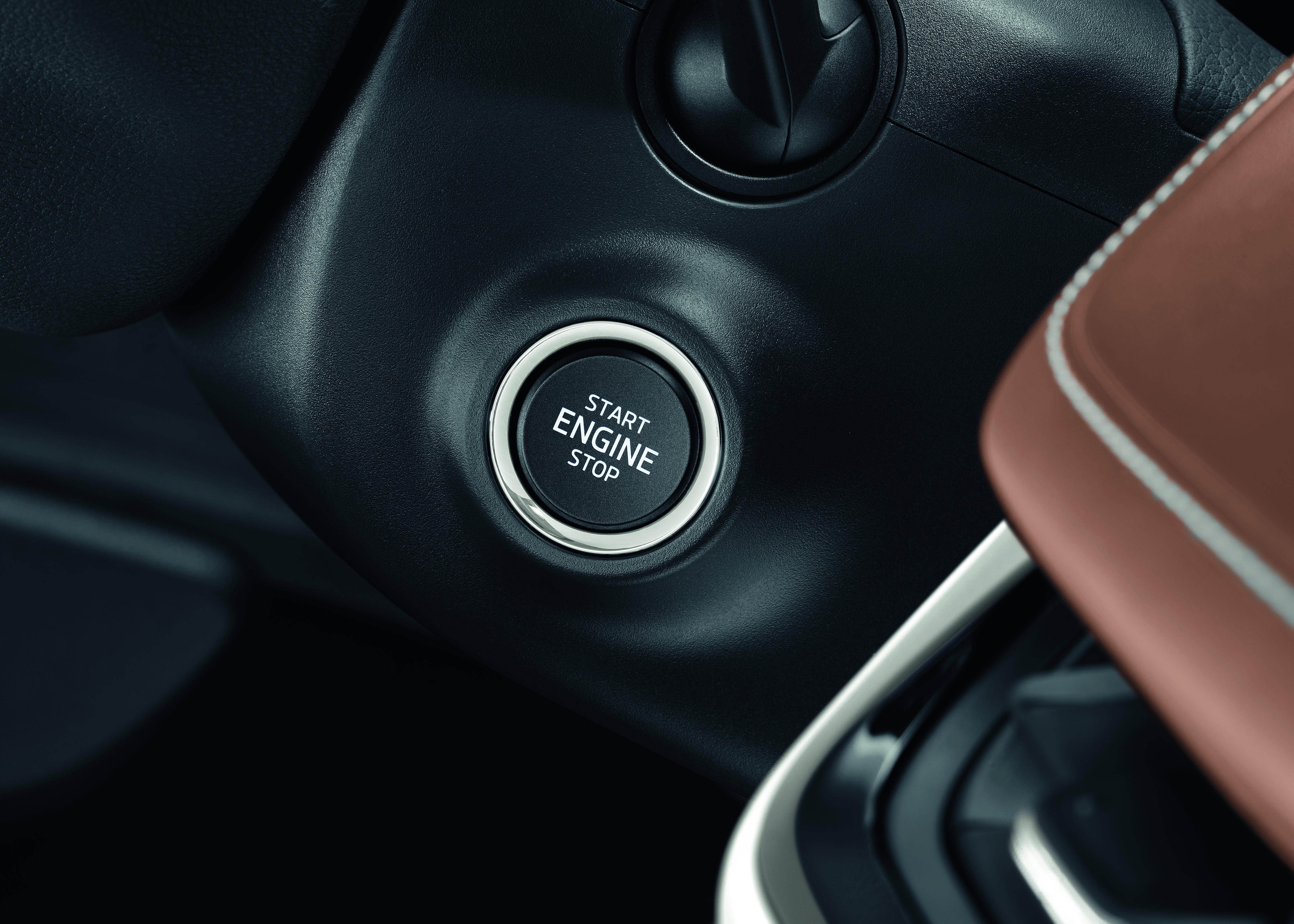 Today’s keyless car starting systems will also become a thing of the past. ENYAQ models, for example, already don’t need them - you start the car by placing the gear selector into the D position.

Speaking of the future, there are also plans for unlocking with a mobile phone or smartwatch via UWB, Bluetooth and NFC technology. This should be a reality in the next few years. The trend for the slightly more distant future is cars with all sorts of antennas dotted around them. Naturally, this will be about connectivity, this time for communication with the surrounding infrastructure, other cars and road users and so on. The autonomous age is on its way, and these technologies will be necessary to get us to level four autonomous driving and beyond.

The new generation of keyless entry systems offers one ingenious safety feature: protection against what’s known as “signal extension”. To this day, we still occasionally come across reports of thieves trying to steal a parked car by amplifying (or “extending”) the signal of the key needed to open the car. The new OCTAVIA and electric ENYAQ iV models are already equipped with something called a UWB box that prevents this. UWB stands for Ultra Wide Band, and the device works on the principle of signal time-of-flight verification. The signal travels at the speed of light, so the UWB box sends a signal to the key and waits for a response, which must come within a certain time. If the signal is extended, it will never make it in time – it’s a physical impossibility.

Doors for all seasons

While locking systems have transformed radically over the years, the basic principle of car side door mechanics remains essentially the same as before. If anything has fundamentally changed, it’s how today’s doors as a whole withstand the weather. Forty or so years ago, frozen-up lock cylinders and the resulting complications with unlocking the car, or difficulty in closing the side windows, were not rare – water got everywhere and nothing could stop it from freezing. 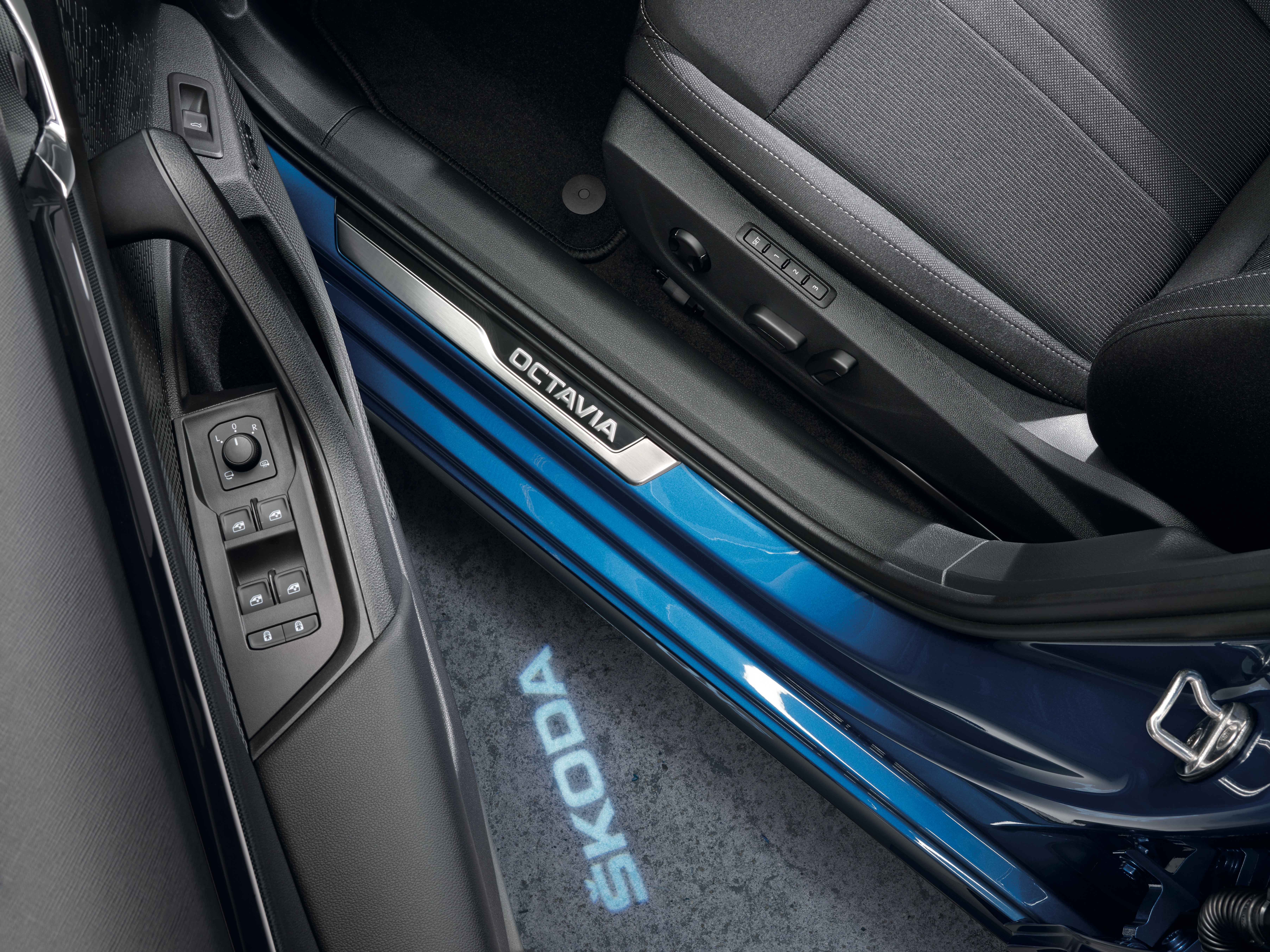 Besides providing protection, the doors illuminate the ground when you're getting out.

But the second half of the 1990s brought changes, as more effort was devoted to making doors that were robust and weatherproof, and to ensuring that the opening and locking system works in all conditions. “That’s basically where we are today, when we can guarantee that when you approach your car, you don’t care that there was a big freeze after heavy rainfall. The doors of modern ŠKODAs still have their wet and dry areas, but there’s been massive progress in door design and mechanisms. The main difference is that water enters the wet area of the door much less than it did before and it’s kept away from critical areas. The door locks and the Bowden cables for operating them are designed so that water and low temperatures do not affect their function,” explains Simon Jeníček from the Side Door and Rear Lid Mechanisms Development Department.

The structures of a door depend on the era the model was developed in, which is linked to safety requirements or the regulations of the individual territories around the world where the cars are delivered. “For a car for North America, for example, there could be differences in the thickness of the struts – American requirements are stricter than European ones in this respect,” says Petr Havelka from this department specialising in door mechanisms.

In principle, there won’t be much difference between the doors of the ŠKODA FABIA and KODIAQ either. Even though they are cars of different sizes and weights, with different requirements for mechanical resilience, they still have doors on hinges that have external and internal sheet metal, struts inside the door, by the handle, by the hinges and by the locks. And as far as the locks are concerned, they are almost identical for the FABIA, KODIAQ or SUPERB.

THE APPROACH OF THE KEYLESS AGE

The Nineties: key for a ŠKODA FAVORIT 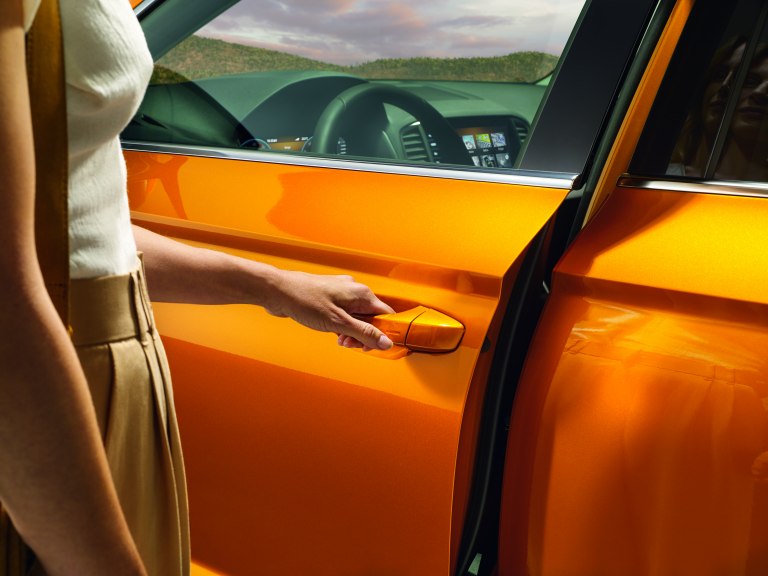 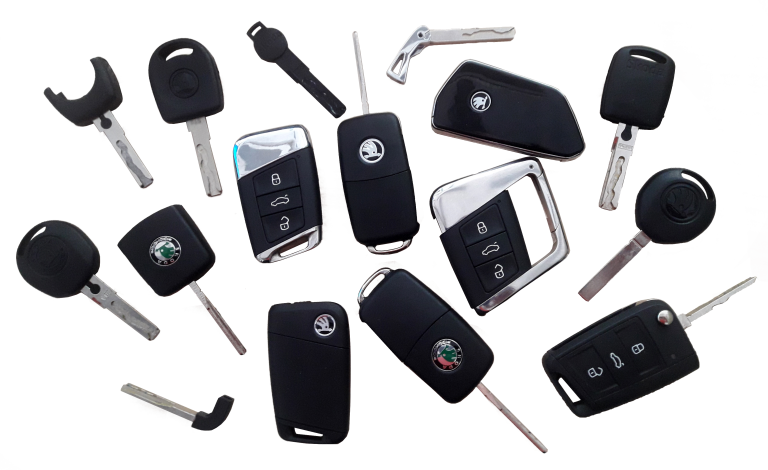 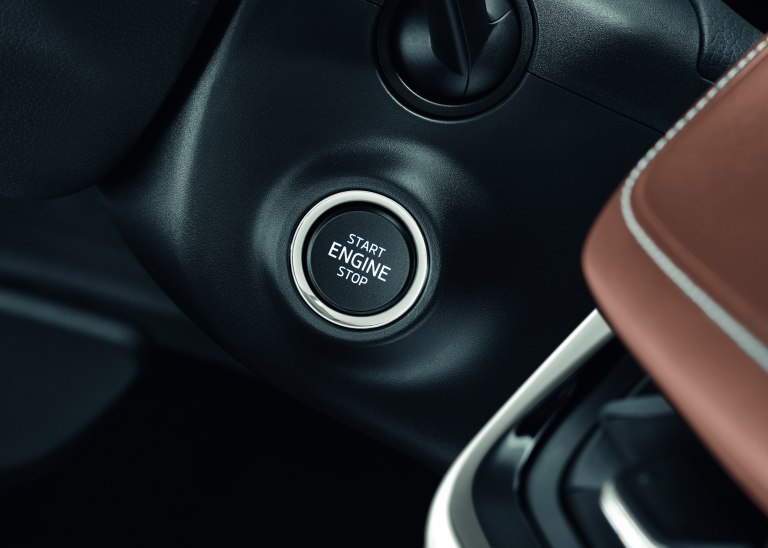 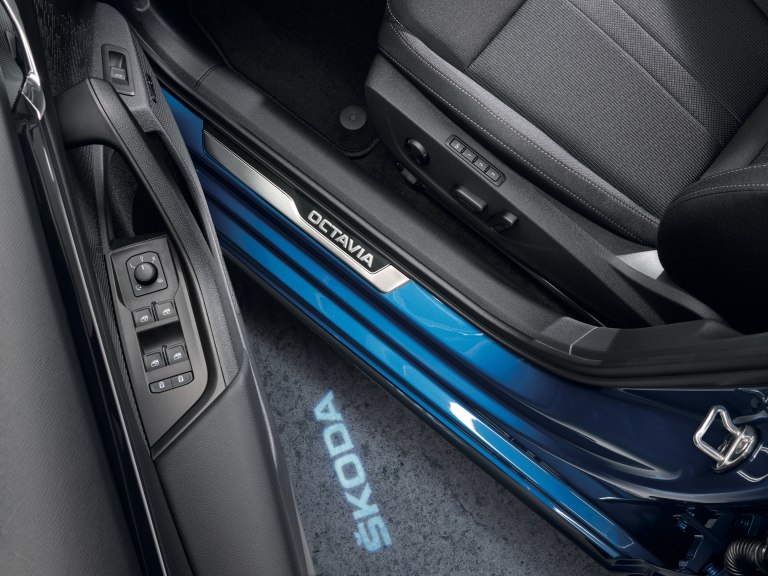 The doors illuminate the ground