Staying safe wherever you sit

What harm might a phone in a shirt pocket cause? Who should sit on the right side of a car’s back seat? Answers to these questions will also help you drive more safely!

Our previous article helped every driver find a comfortable and safe seat set-up and an ideal position behind the steering wheel. Now it’s time to buckle up.

Seat belt placement is an important aspect of safety. Its lower part must always go over the pelvis, not the abdomen. While the body would be restrained in a crash in either position, the impact on the body’s internal organs would be very different. The upper part of the seat belt should ideally pass across the centre of the chest and always through the centre of the shoulder, never too close to the neck. 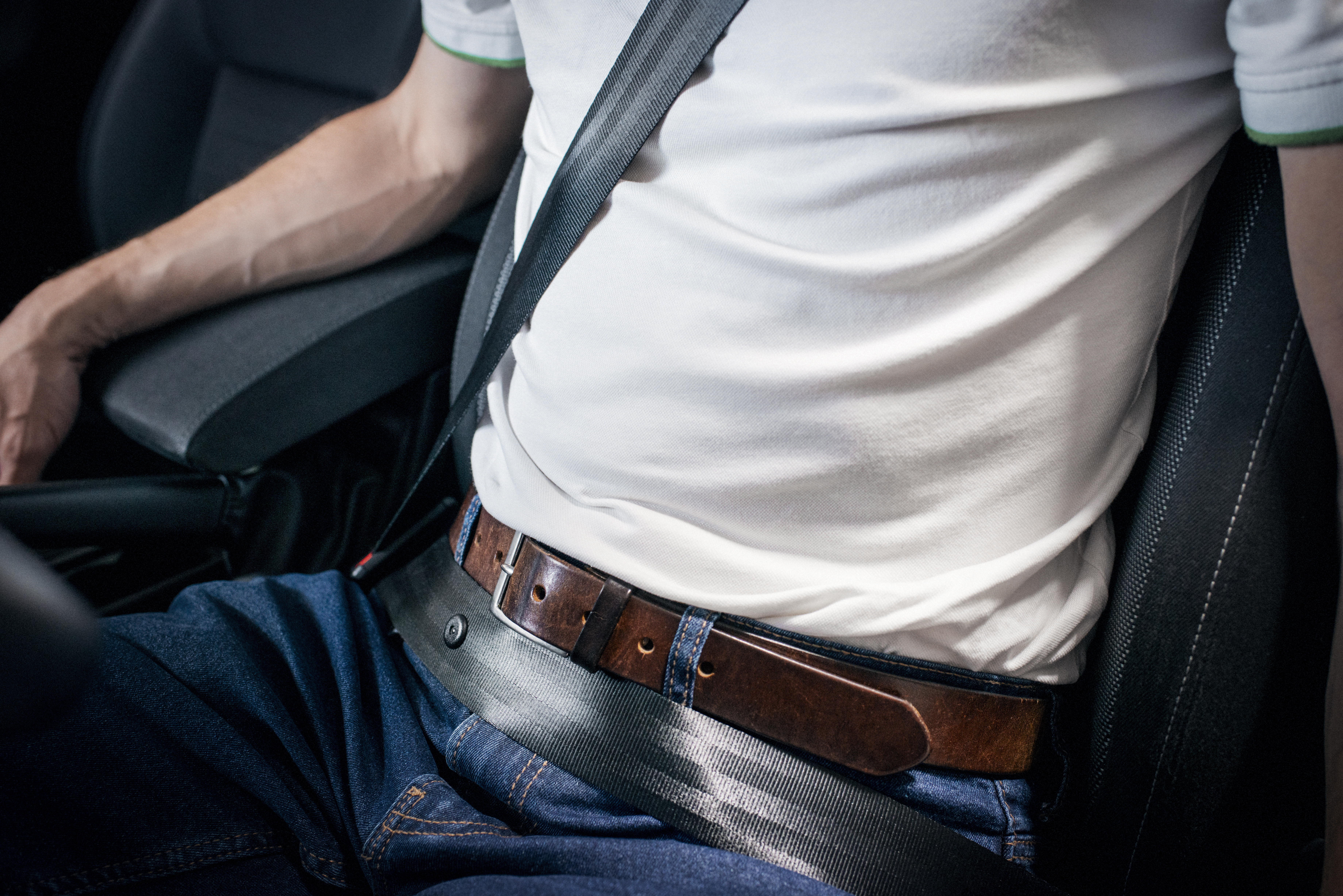 Correct placement of seat belt on the waist area

It is also a good idea to pay attention to all sorts of phones, pens, keys, necklaces and the like – seat belts should never go over them. These items can do nasty damage when pushed into the body. 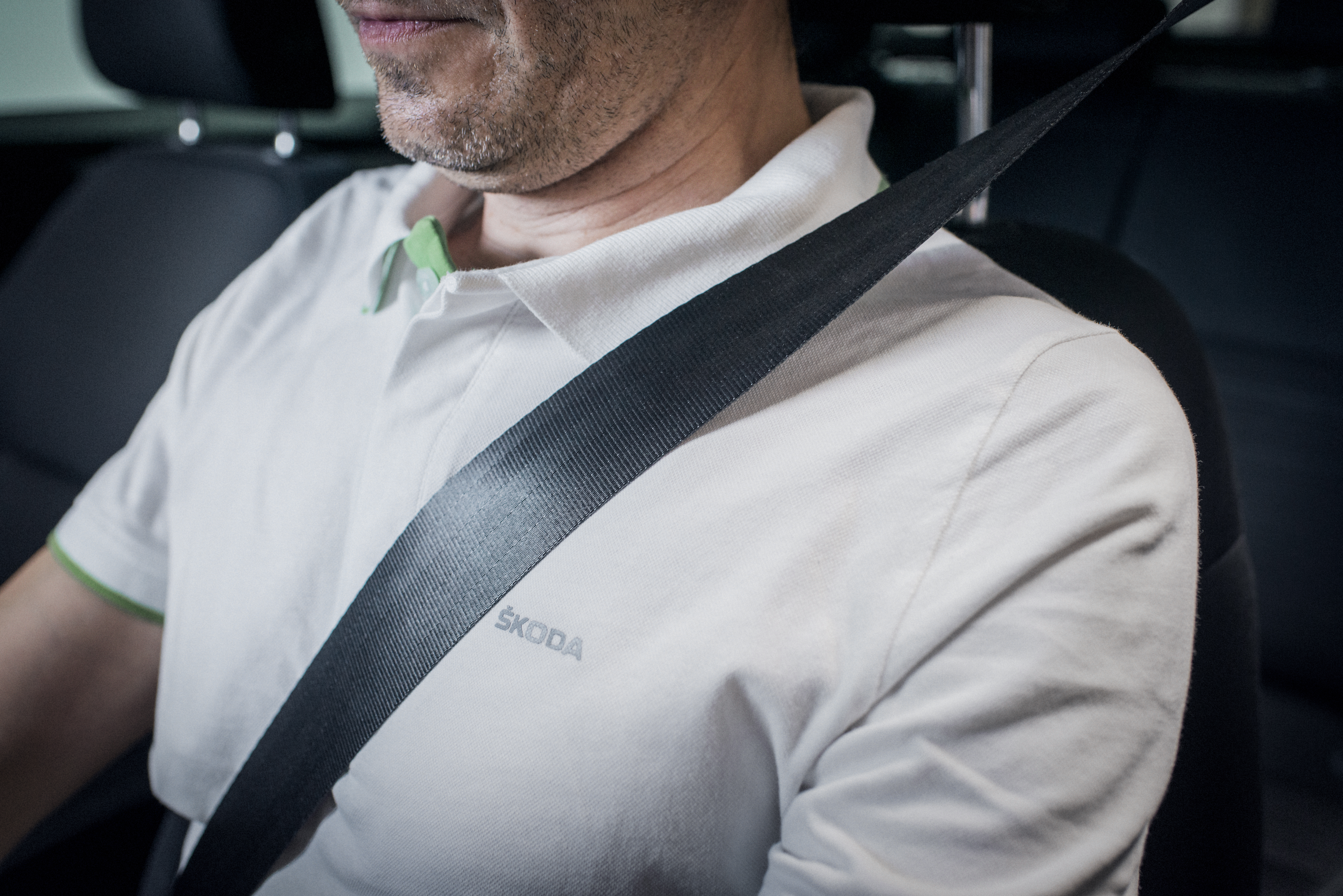 TIP: Even at a fairly advanced stage of pregnancy, women are not forbidden from driving, but they must be careful just where the lower part of the seat belt goes – here the pelvis rule is twice as important, as placing it across the abdomen also puts the foetus at risk. Special accessories are available on the market for this purpose, such as a thin cushion with a strap that clips onto the seat belt. When sitting on this cushion, the strap pulls the belt down below the woman’s abdomen. 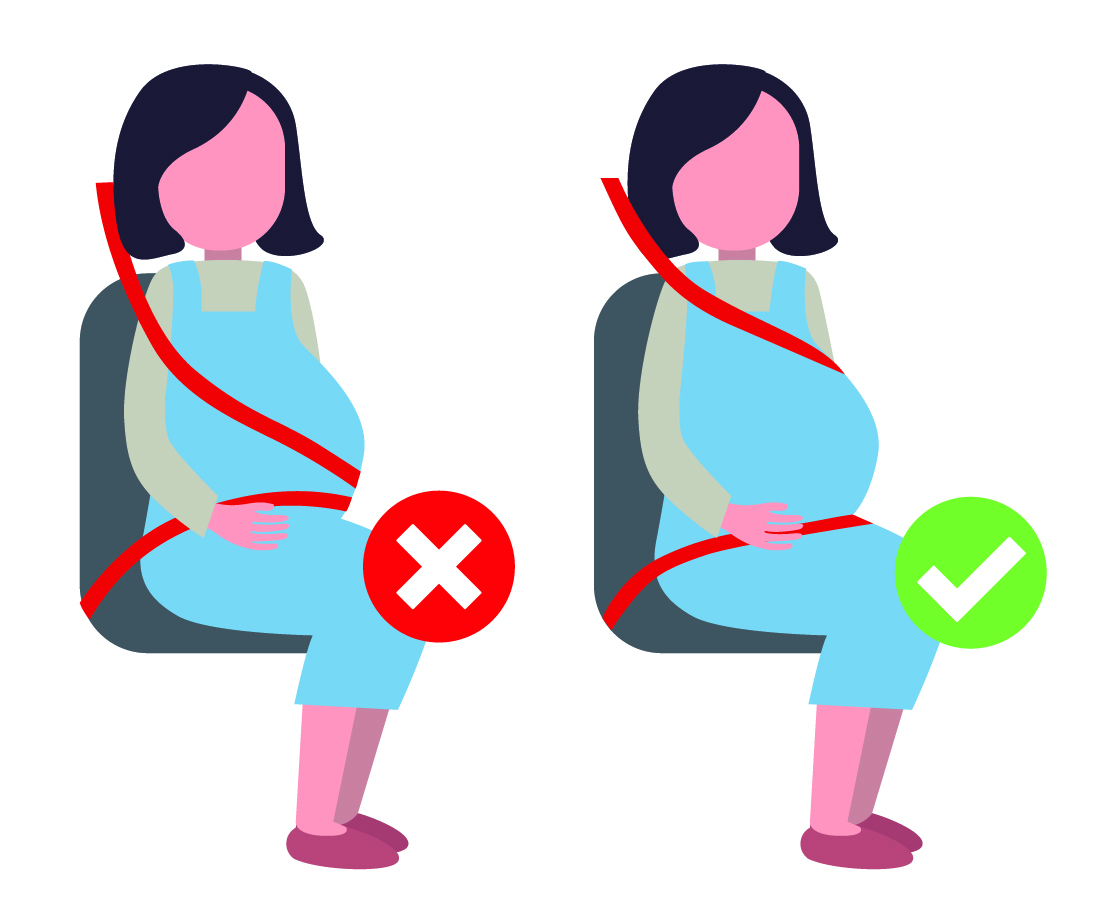 Don’t put your feet up

A few basic safety rules also apply to passengers. People in this seating position – especially if no one is sitting behind them – often tend to move their seat a long way back and recline the backrest. But this puts them outside the seat belt’s effective zone, because the seat belt should always sit snugly against the body. “As soon as there is a gap between the body and the seat belt – whether in the shoulder area or even lower down on the chest – you are at risk of internal injury,” explains Robert Šťastný, a member of ŠKODA’s Road Safety Research team.

One popular and very dangerous mistake is putting your feet up on the dashboard. This tends to result in nasty injuries when the airbag is released with tremendous force and speed. “The airbag then pushes the legs into the body with incredible energy. It damages not only the limbs, but also the lumbar region, while the head travels forward against the knees. This can be a truly tragic combination,” warns Šťastný. 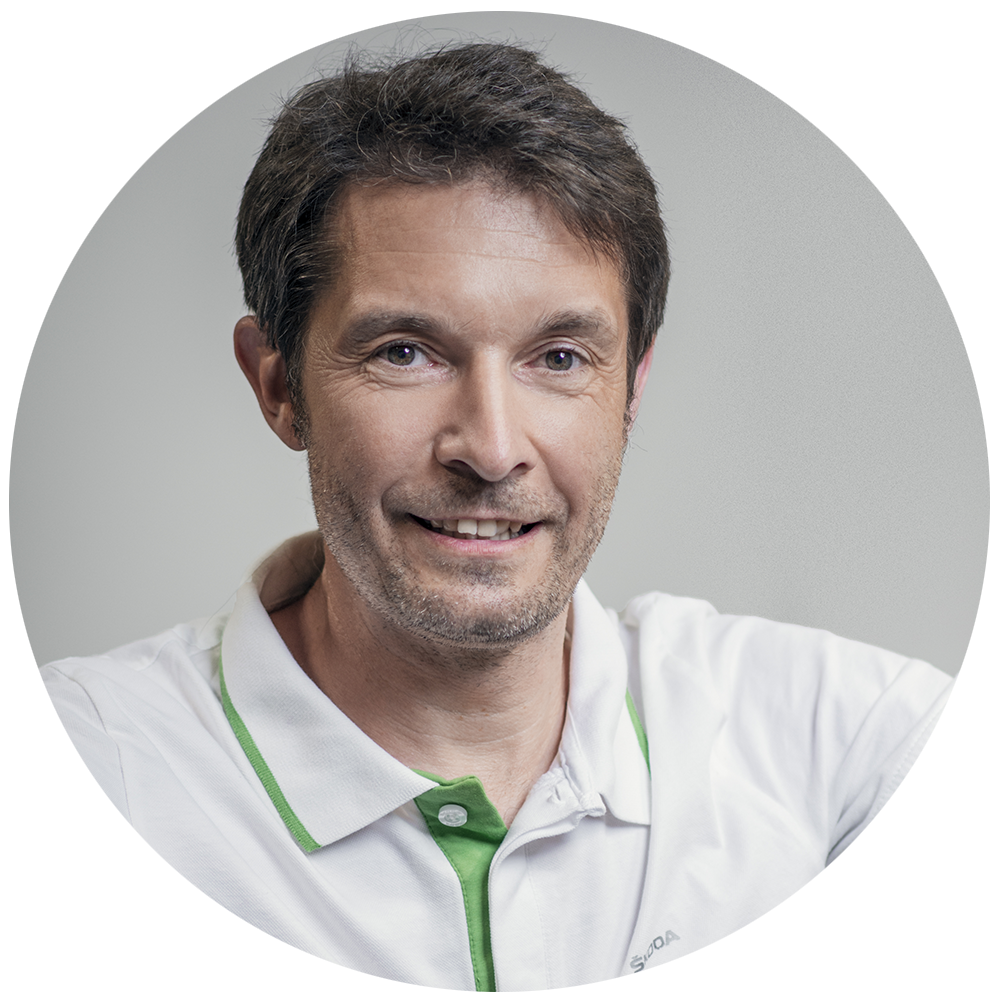 “Using seat belts in the back seat is paramount. In a crash, an unrestrained body flies forward and injures the head and upper spine of anyone sitting in front of it,” Šťastný points out.

People often wonder who should occupy the second row of seats. Our traffic expert offers a handy guideline. “Think about situations where you and your family need to get out of the car fast. For example, in pile-ups and the like. Always seat the car occupants in a way that lets you evacuate the car quickly and via the right-hand doors facing the side of the road. For example: a baby in an infant seat and its parent sitting next to it. The parent should always sit on the right behind the passenger seat, so she can quickly unbuckle the baby or the whole seat and escape to the right. If it’s the other way round, she has to get out into the road and walk around the car, or climb over the child seat inside the car,” says Šťastný. 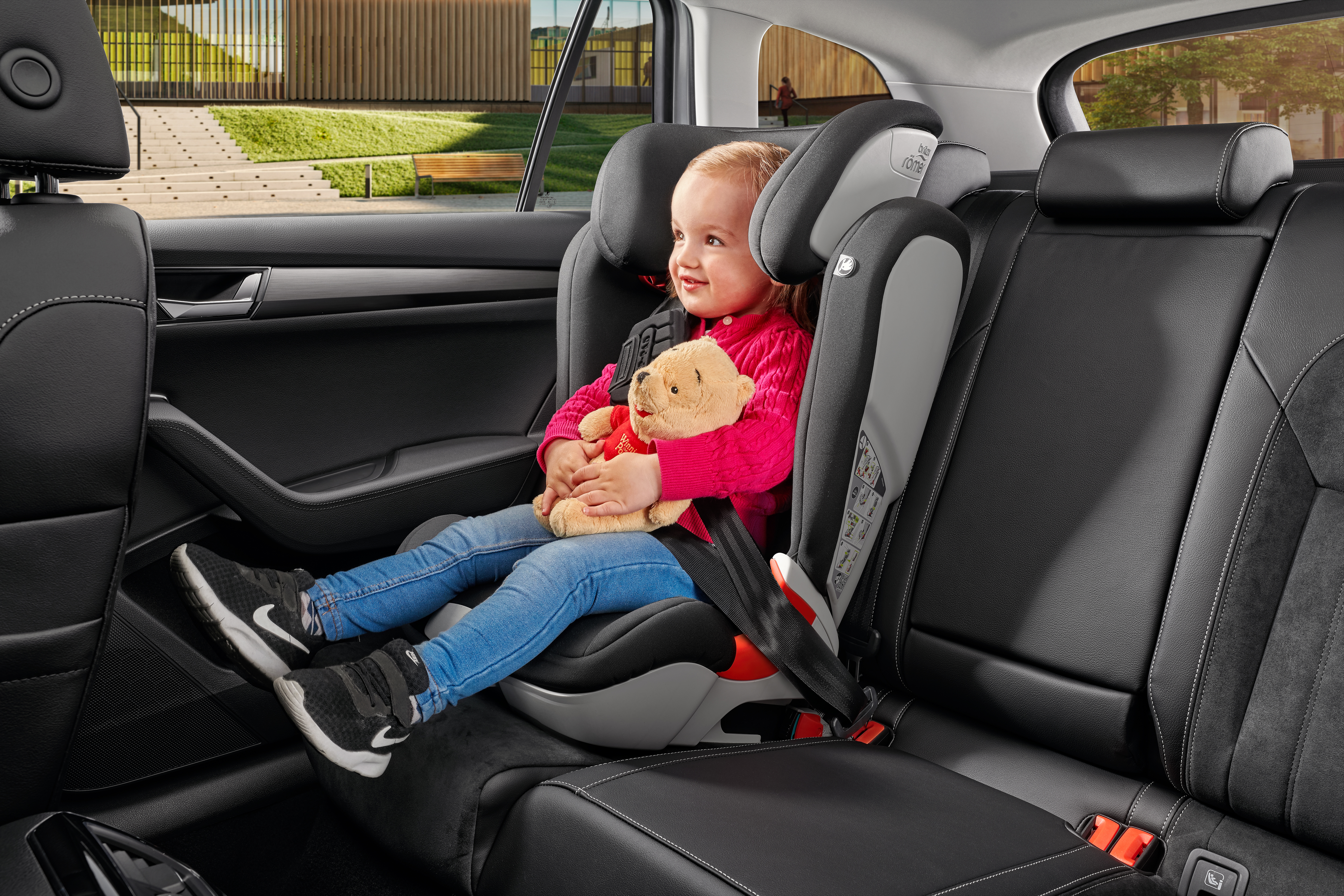 A child old enough to get out of the car by itself should sit behind the passenger seat so that the child does not get out into the road.

Something similar applies if we have children of different ages in the car – the oldest, who may already be able to react in a crisis and unbuckle other passengers’ seat belts, for example, should sit on the right. Similarly, in a seven-seater car, the right-hand seat in the second row should be occupied by someone who can get out on their own in an emergency and fold down the backrest for the occupants of the third row. Put simply, we should never block the way out with an Isofix seat, for example. And we should apply the same principles when dropping children off at school, for example.

When it comes to child passengers, Robert Šťastný has a few tips that deserve our attention. “Even some pre-schoolers would rather only sit on the seat cushion without the backrest part. But this cannot protect the head and neck from a side impact. I therefore appeal to everyone: keep your children in a full seat for as long as possible, until they grow out of it. That is usually around the age of eight to ten.”

Peer pressure often plays a role, as kids’ peers may make fun of anyone sitting in a full child seat. But safety should come first. Top rally driver Jan Kopecký, for example, has also called for this in a prevention campaign. “Look, even I have a seat in my race car that protects my whole head,” he says, encouraging children to delay the switch to a booster seat as long as possible. 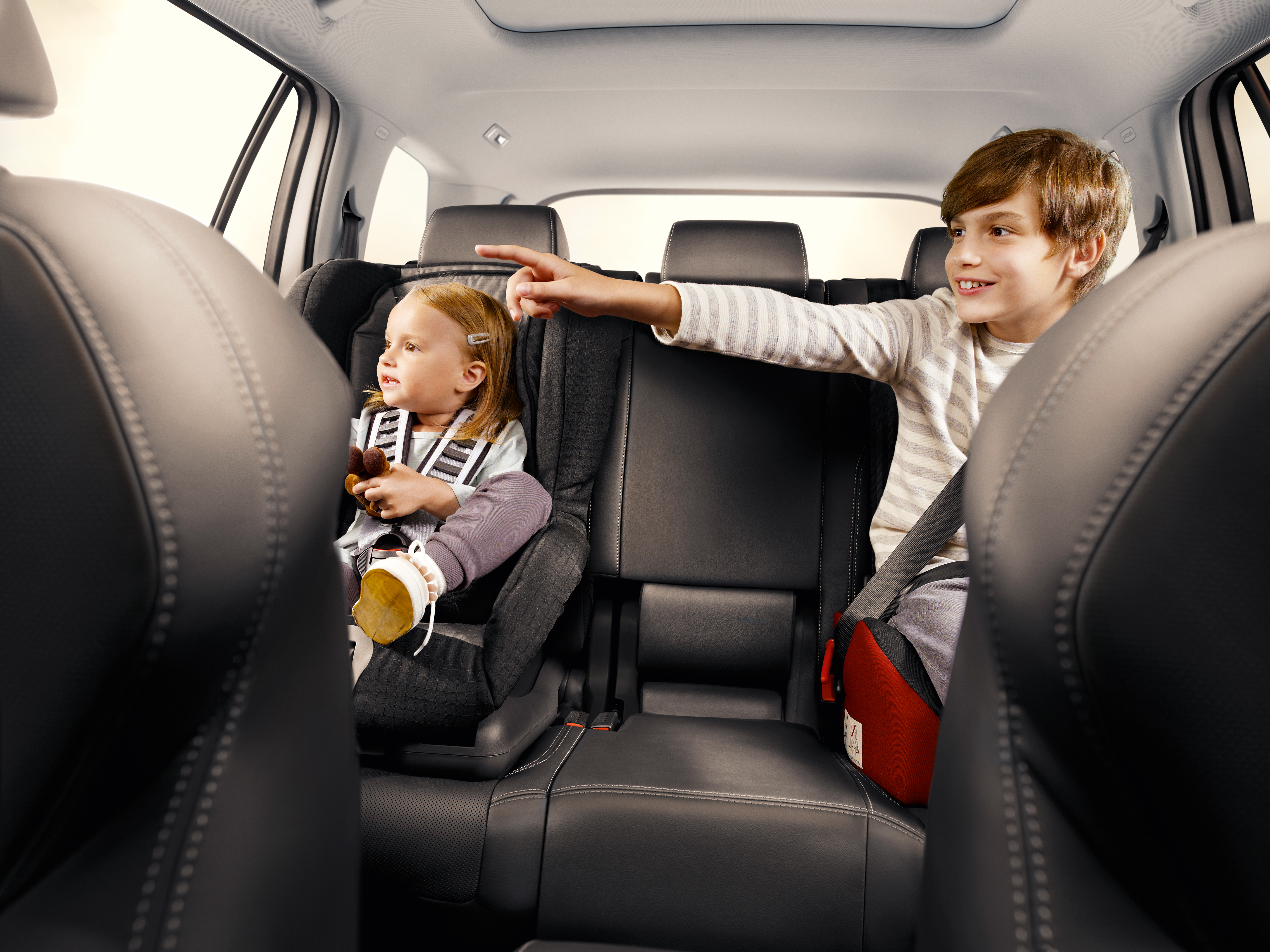 Keep your children in a full seat for as long as possible, until they grow out of it.

Babies should also stay in rear-facing infant seats for as long as they can safely fit in the seat. Always make them face the rear, even in the front seat, in which case never forget to deactivate the front passenger airbag. “Today, the trend is to use rear-facing seats even for bigger children, up to the age of four, say. Safety experts are clearly in favour of this: impact force is better distributed in the event of a crash. So even though some children may not be entirely comfortable, we advise them to sit in the car this way, as it’s incomparably safer,” Šťastný appeals to parents.

You can find lots of safe driving advice in this article.

Are you sitting comfortably? What about safely?

STAYING SAFE WHEREVER YOU SIT 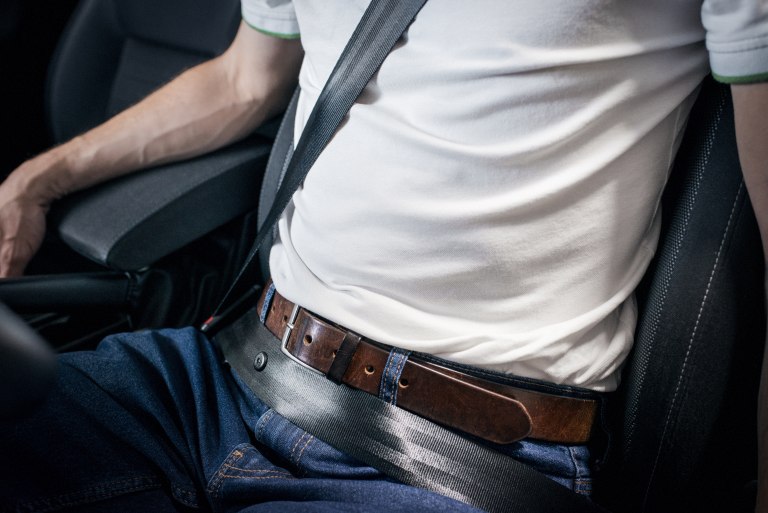 Correct placement of seat belt on the waist area 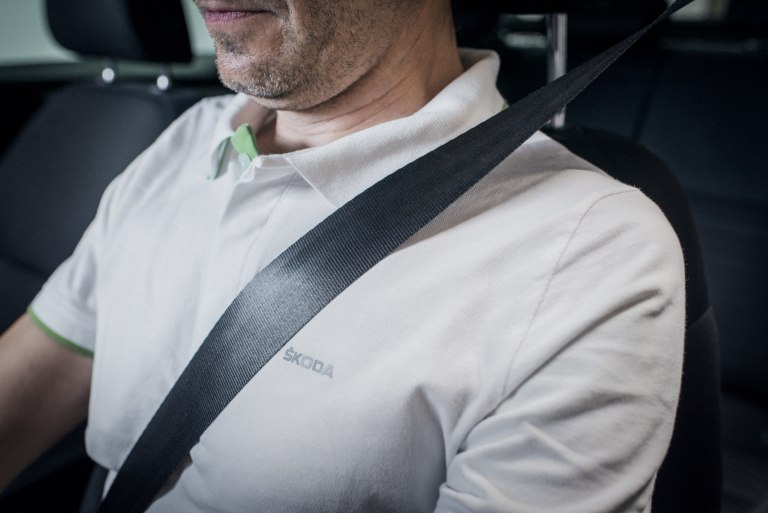 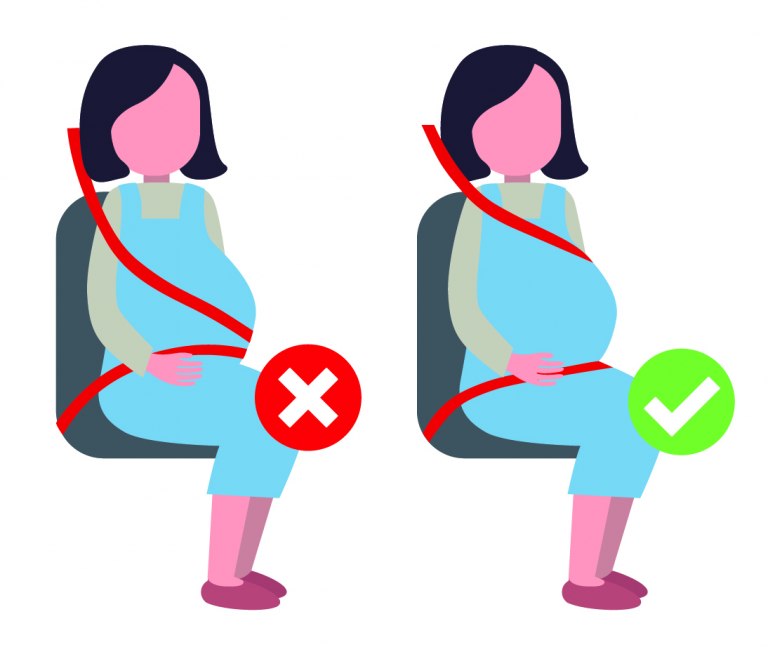 Proper placement of the belt for pregnant women 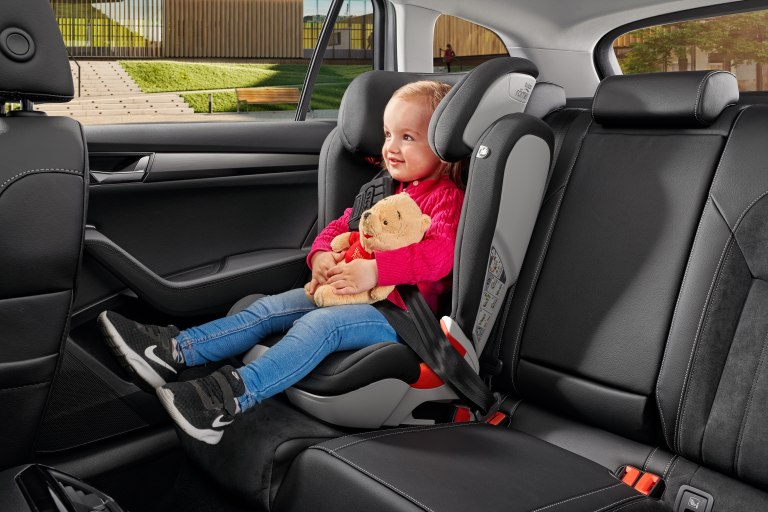 A child old enough to get out of the car by itself should sit behind the passenger seat. 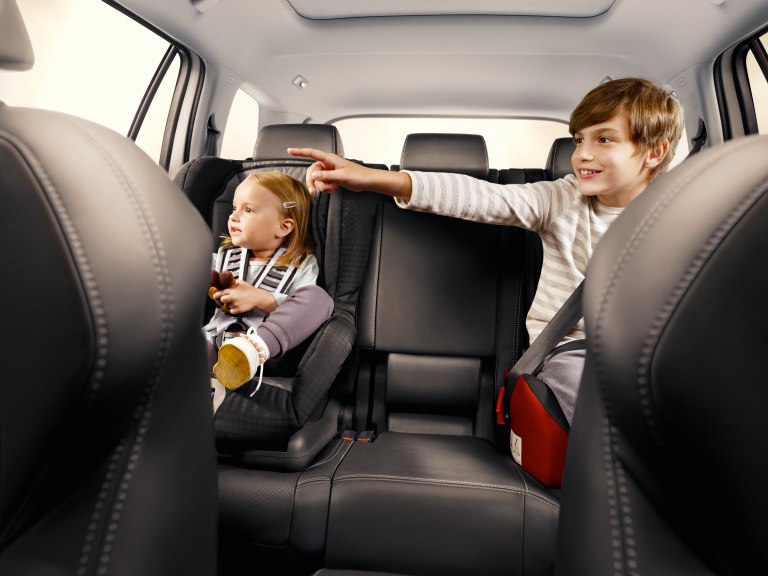 Keep your children in a full seat for as long as possible, until they grow out of it.

Making sure cargo is not a threat

Are you sitting comfortably? What about safely?