A different location every day, time pressure, and sometimes difficult repairs. This is the daily bread of the ŠKODA mobile service team that takes care of the Tour de France organisers’ cars.

The service team takes care of around 250 cars. Ninety per cent of these are ŠKODA cars such as the ŠKODA ENYAQ iV used by the race director, or the ŠKODA OCTAVIA and OCTAVIA iV and SUPERB iV. The rest are vans from other Volkswagen Group brands. The factory service won’t turn away cars used by cycling teams either, as long as they are emblazoned with the emblem of the winged arrow.

The mechanics have been working flat out since seven in the morning. The ŠKODA mobile service team is already on site, but unexpectedly its manager, Radovan Beran, is running around trying to find a doctor to treat a colleague who has developed a nasty bout of shingles. “It went well, he’s going to be fit. We need him, he is a diagnostic technician who also takes care of electric cars. His absence would have seriously jeopardised the entire service,” says Radovan Beran, relieved.

This is one of the many problems that have to be resolved by the head of ŠKODA’s service team who is in charge of the fleet of organisers’ cars at the Tour de France - with the race director’s ŠKODA ENYAQ iV taking pride of place among them. This year, the ENYAQ iV is being used by race director Christian Prudhomme on 15 of the 21 stages. 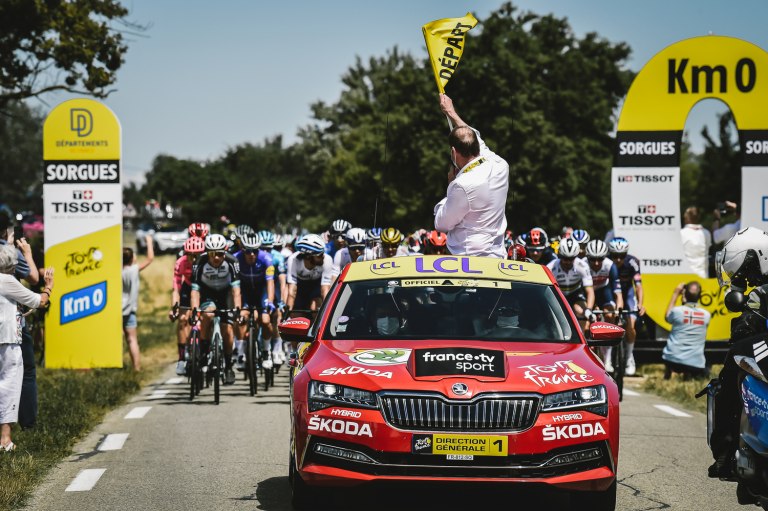 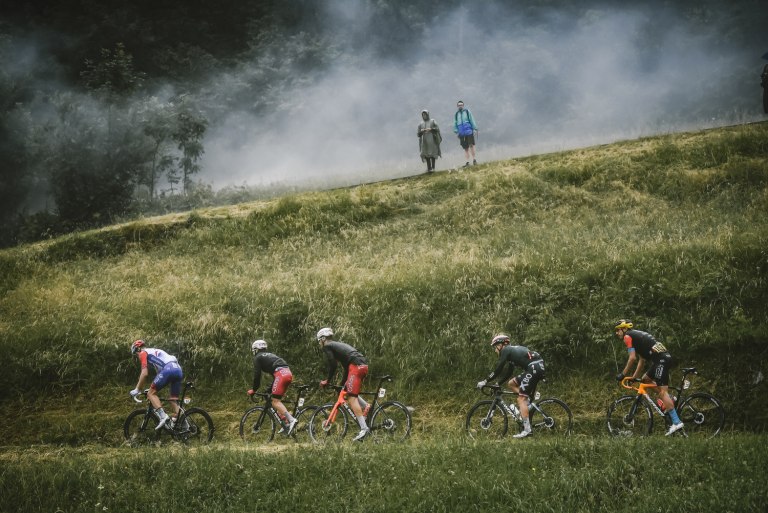 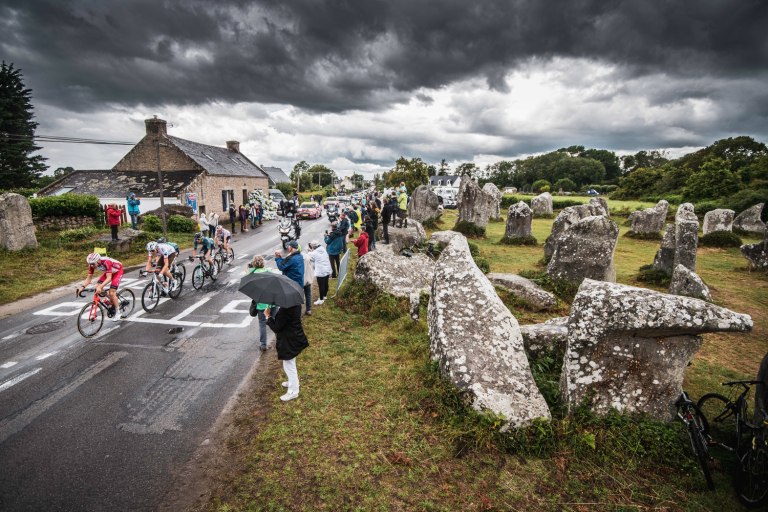 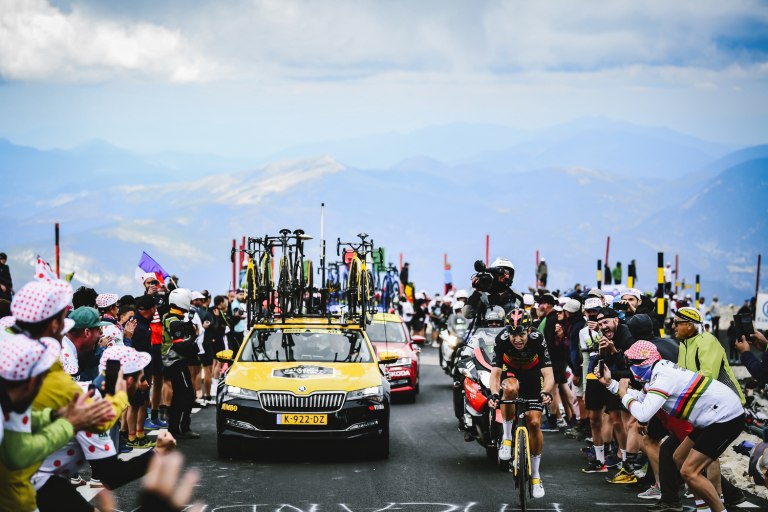 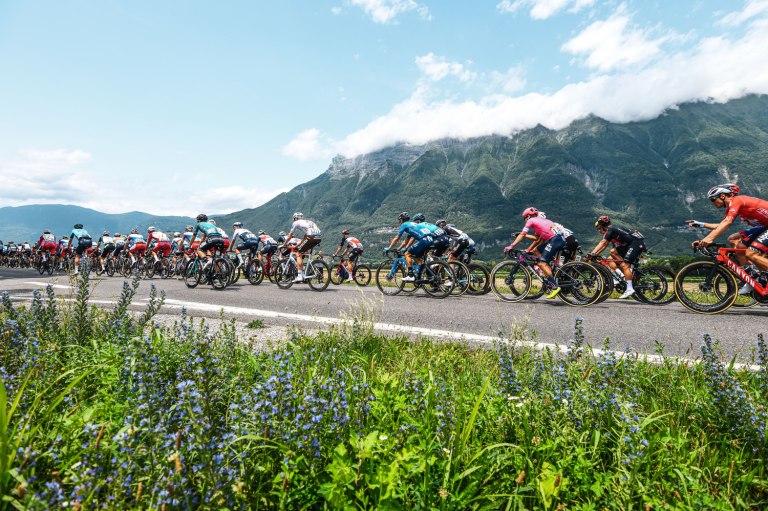 The team consists of five mechanics, two panel beaters and one painter, with two external drivers on hand to carry spare parts. And in France an interpreter is a must. The close-knit team has been together for a number of years now, with some mechanics involved for the eighteenth season in a row. “You have to put your heart into this job. And our team is happy to do that. I’m satisfied when I see that everything is going well, that the guys are enjoying their work and aren’t desperate to get back to the hotel. Personally, I’ve been doing this job for eighteen years too – and you’ll see me here again next year,” says Beran. 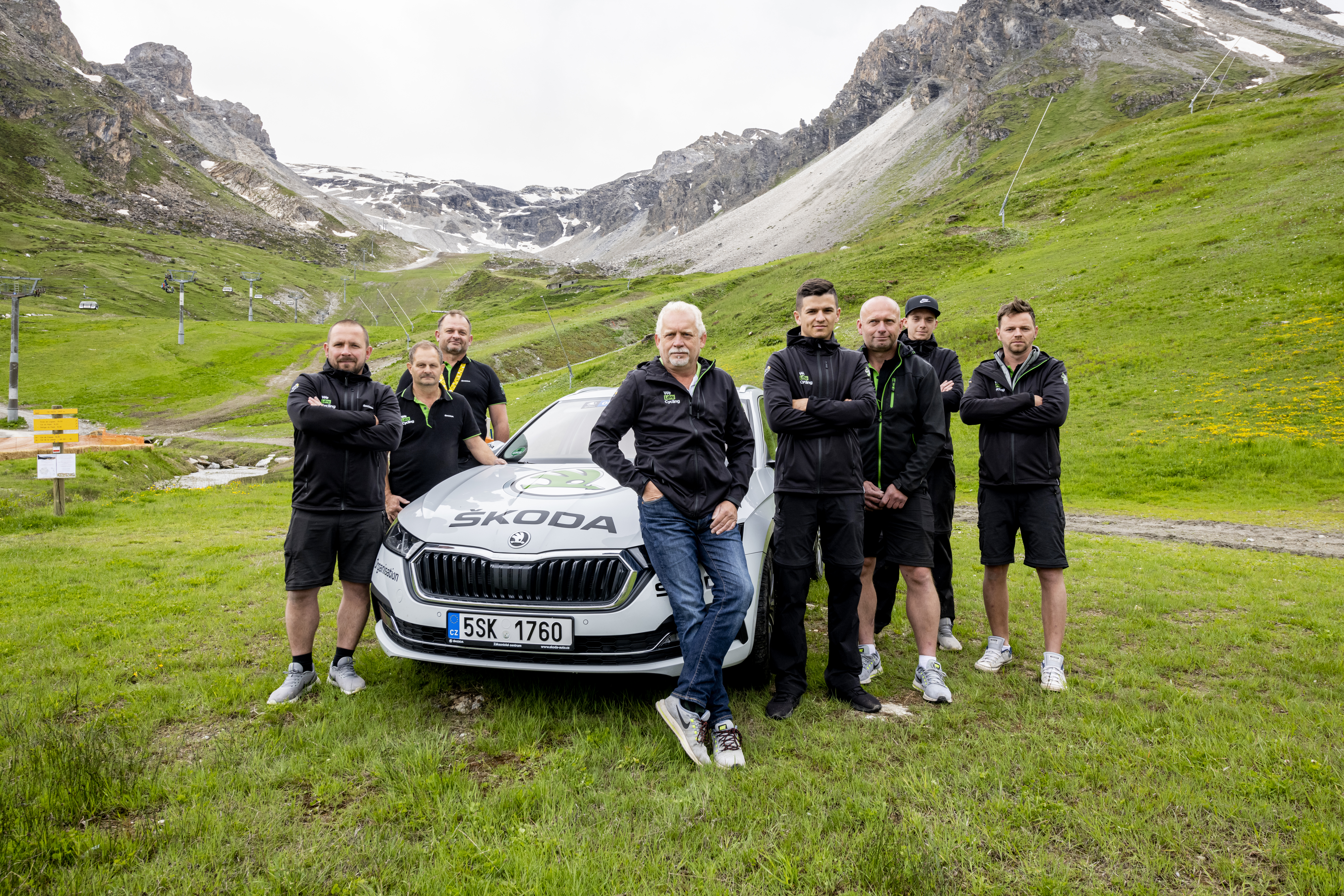 They basically do all the same repairs a regular car service offers, i.e. repairing crash damage, replacing windscreens, wheels and the like. What’s specific is that the panel beaters repair bodywork as much as possible without damaging the paintwork. That’s why they only have one painter. “We try to do as little paint work as possible, as it’s a job that needs a lot of space and time and equipment,” explains the team leader. 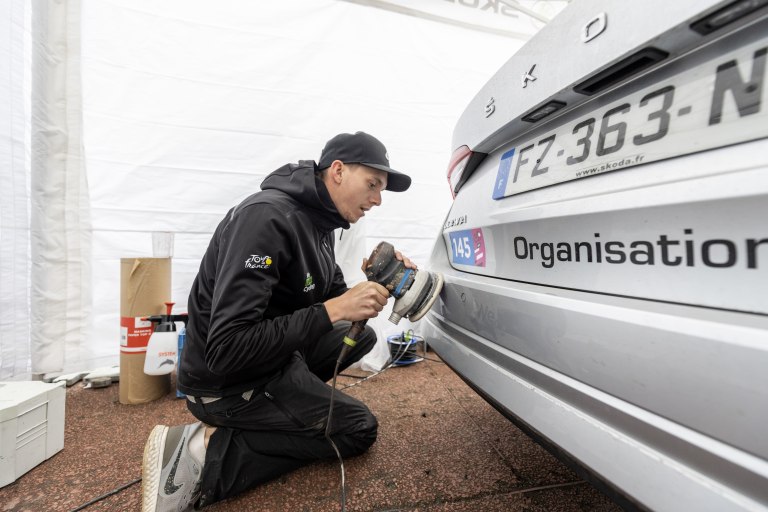 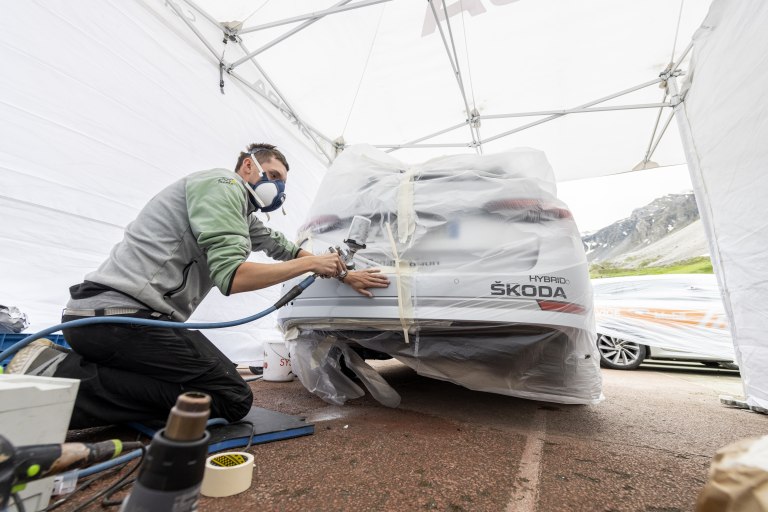 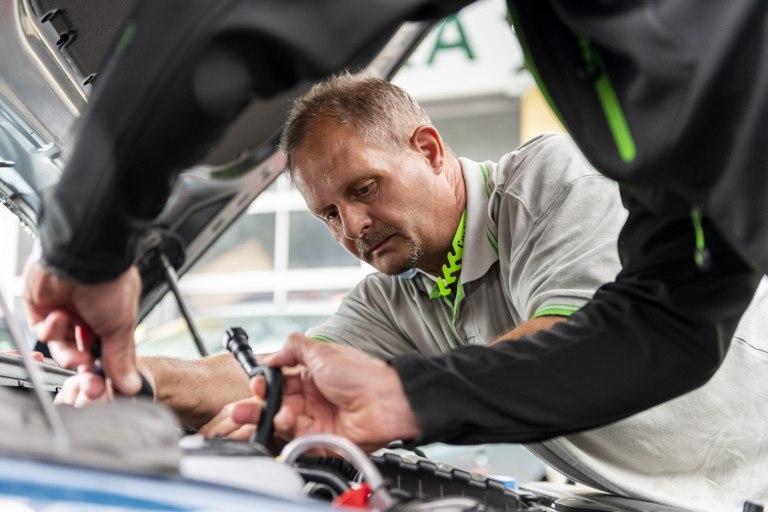 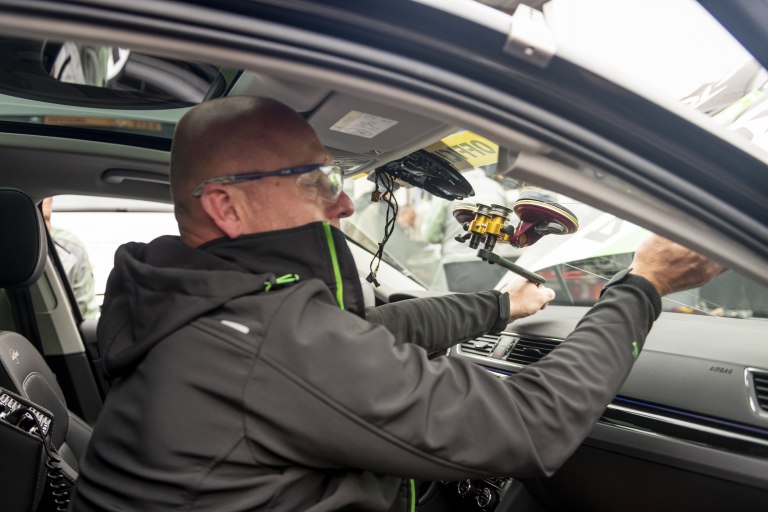 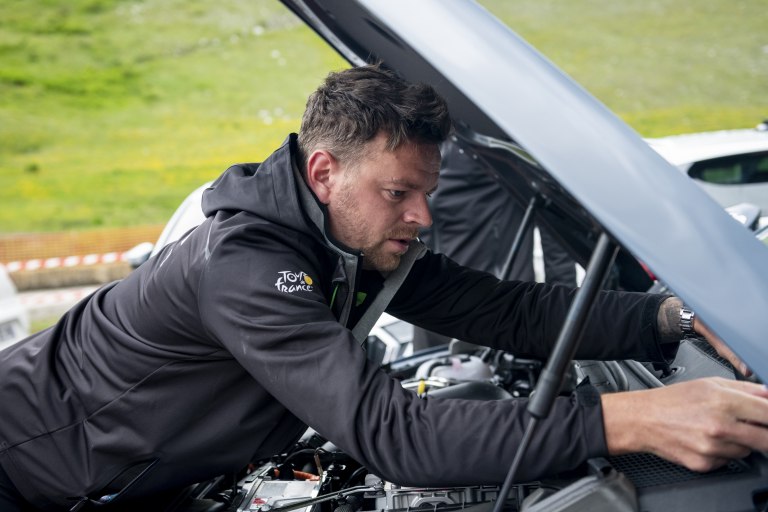 They divide the cars into several categories according to their importance. The race director’s ENYAQ iV and the ŠKODA SUPERB iV cars used by the race commissioners naturally take priority. They cannot be replaced: they are needed in the race and have to be in perfect condition. “Once, the drivers of the red commissioners’ limousines parked on the street outside a hotel for the evening and someone threw flower pots at them. We then spent the night fixing them so that they would be in perfect condition for the next leg in the morning,” recalls the head of the service team with a smile. 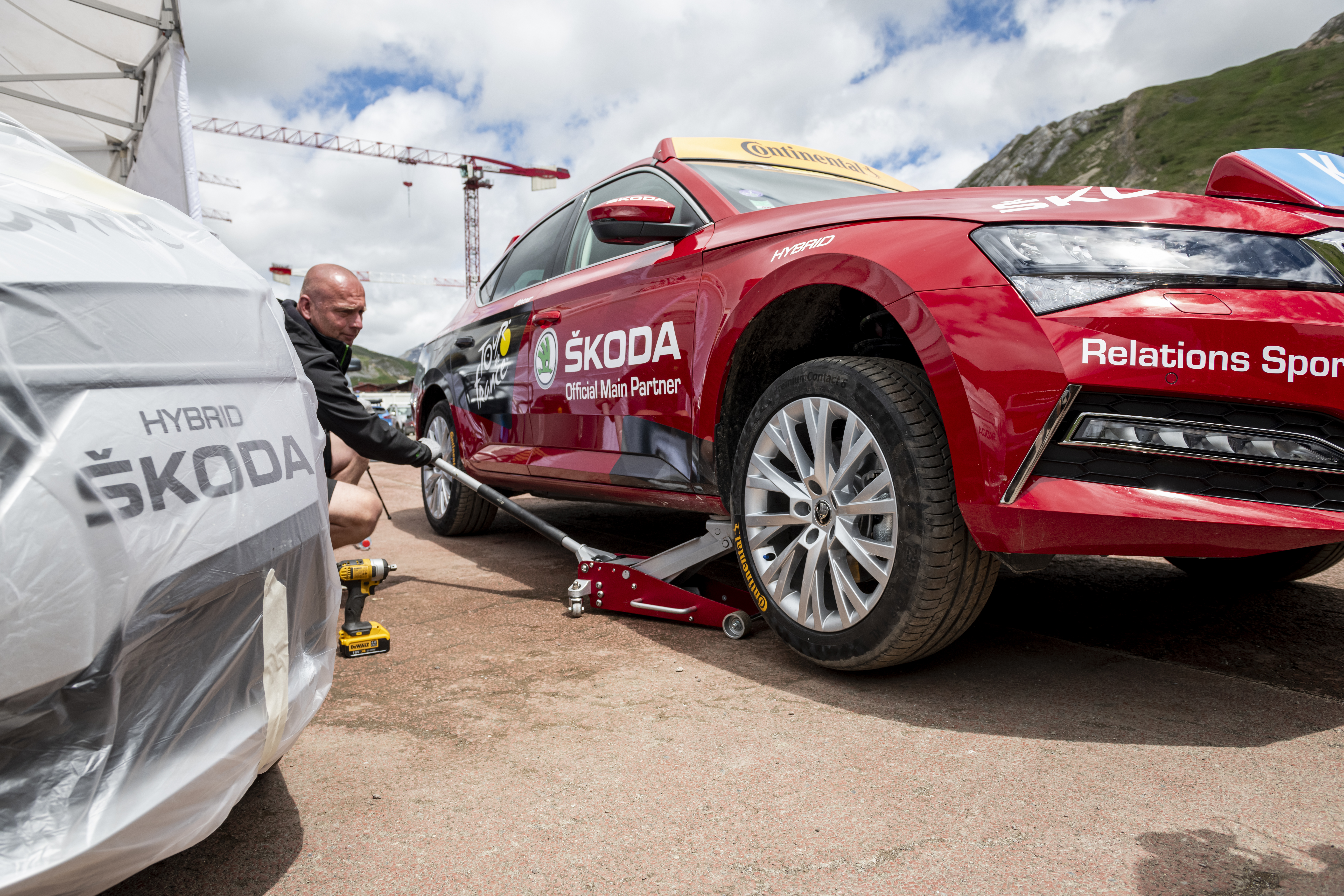 “We’re a kind of circus on wheels”

How does your standard working day on the Tour start?
In the morning we leave the hotel and drive to our appointed station, sometimes fifty kilometres, but more likely two or three hundred kilometres. We set up camp at a predetermined petrol station. According to the regulations, we have to be there at 2 pm at the latest, but due to various closures around the track we try to be there by noon. 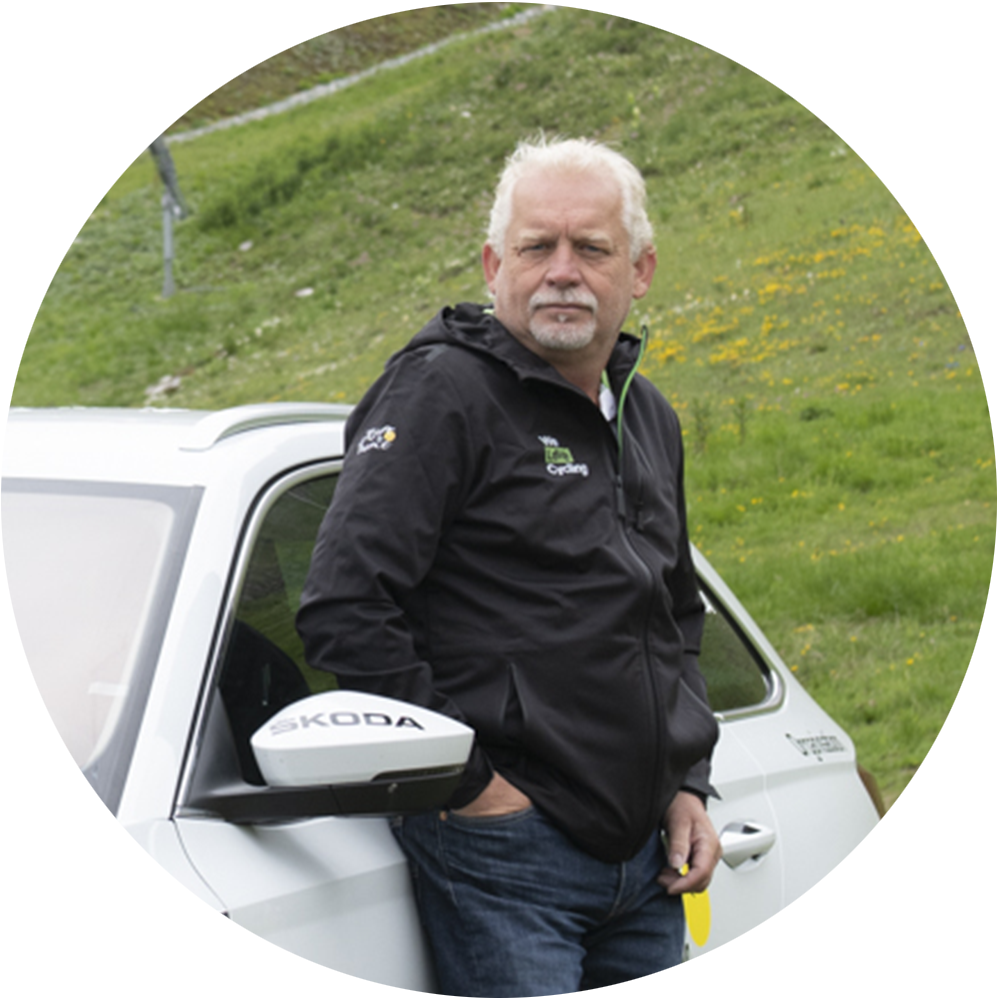 What happens next?
The cars start arriving. Either they’re just filling up and we’ll check them to make sure they’re okay and don’t need our care. Other times they arrive with specific repair requests. Often, during the morning transfer, we are informed that there is a car waiting for us at the station. We pick up the keys at the petrol station and off we go. Just yesterday we were repairing a car that hit a deer. The bumper and mudguards were replaced and sprayed, and the lights were changed. We usually leave the station around eight in the evening, but if we have to we keep working till there’s nothing left to do. The drivers have to wait for their cars, so we can’t just pack up and disappear. 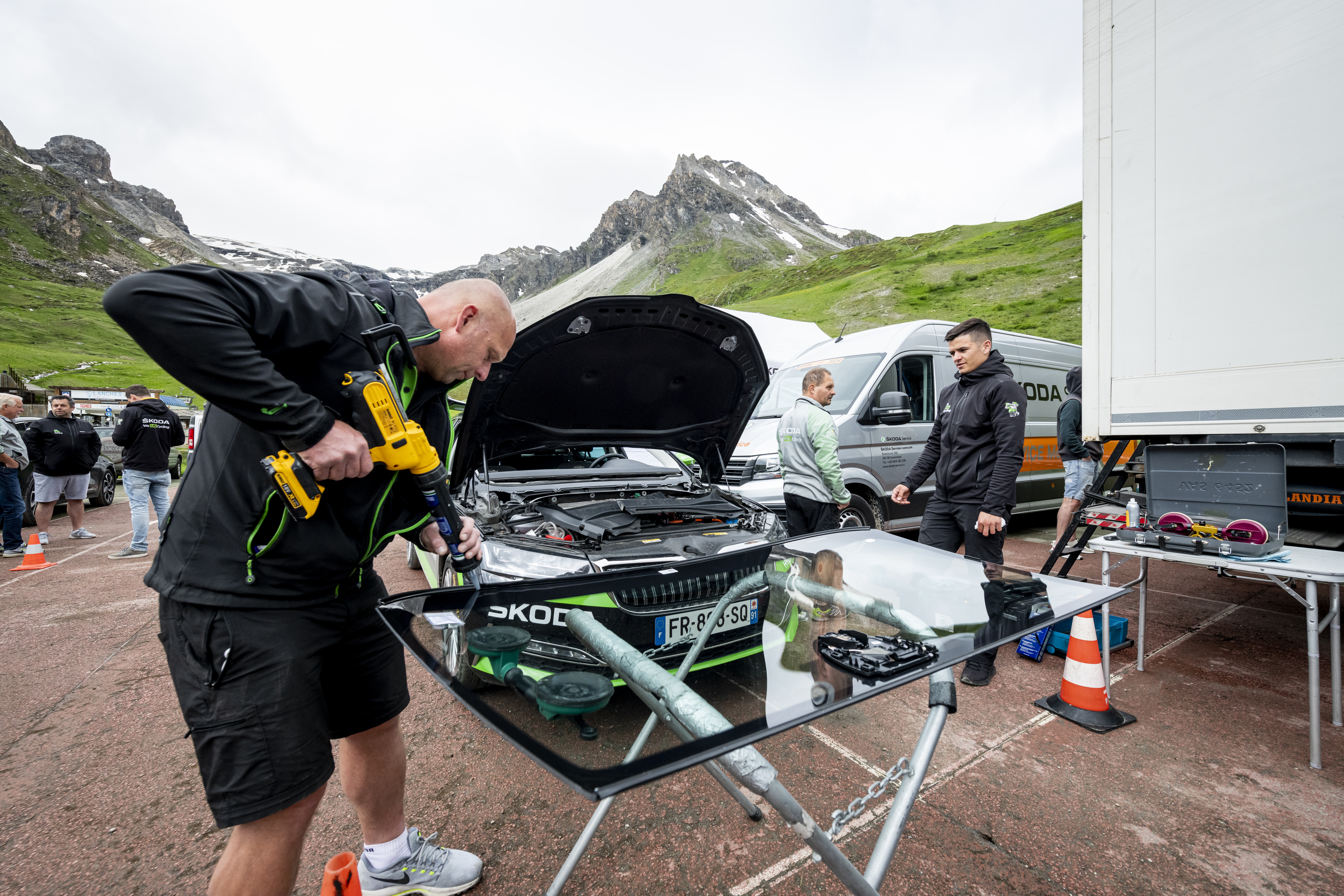 You also take care of the ŠKODA ENYAQ iV cars – what is your experience with them?
I have to say that so far I don’t actually have any experience with them, because there haven’t been any problems. The ENYAQ iVs don’t only drive at the front of the peloton, but also in the caravan for the sponsors, but so far we haven’t had a single one break down. It’s a new model, of course, but we’re ready for it, even its rather sophisticated diagnostics.

How many cars will pass through your hands in the three weeks of the race?
I’ve been doing this job for eighteen years and it’s always pretty much the same. It’s usually around two hundred and thirty, two hundred and fifty repairs. 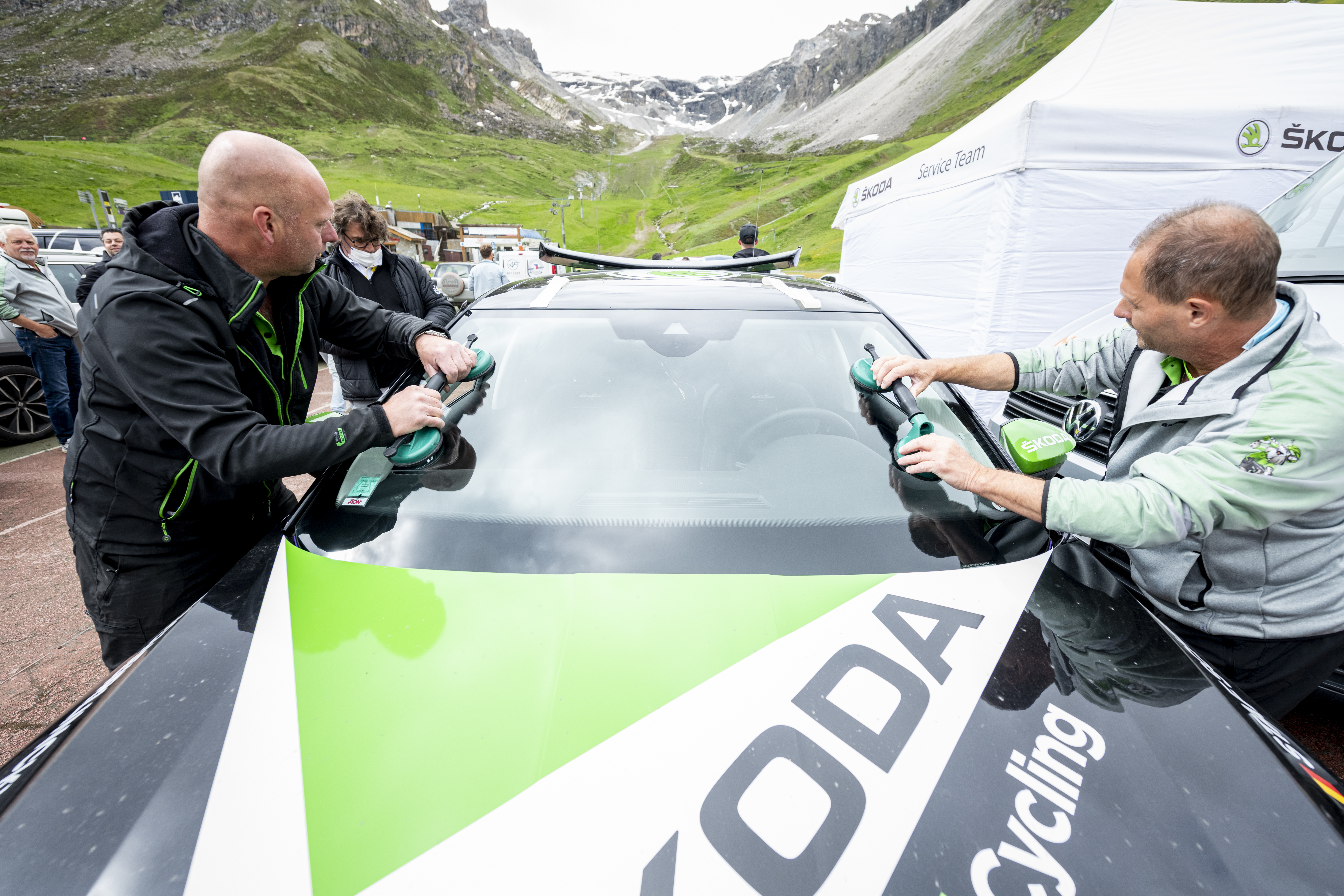 What’s essential for the team to function well?
Easy-going people. They have to work as a team, which is why I try not to change the line-up too much. Sometimes a newcomer comes in, of course, and then it takes a while for him to settle in and fit in. My people aren’t allowed to look at the clock to see if they’ve worked eight hours or ten. If it’s necessary, the work has to be finished. I want to praise the guys, they’re a very well-oiled machine. It’s a kind of circus on wheels. (laughs) 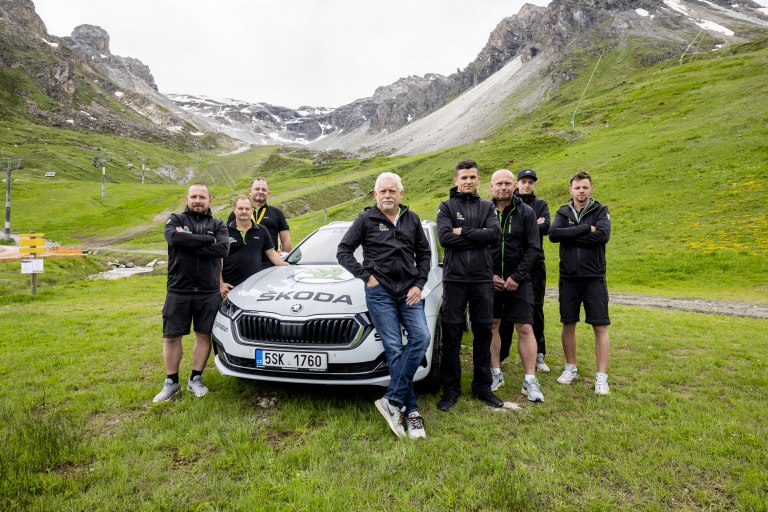 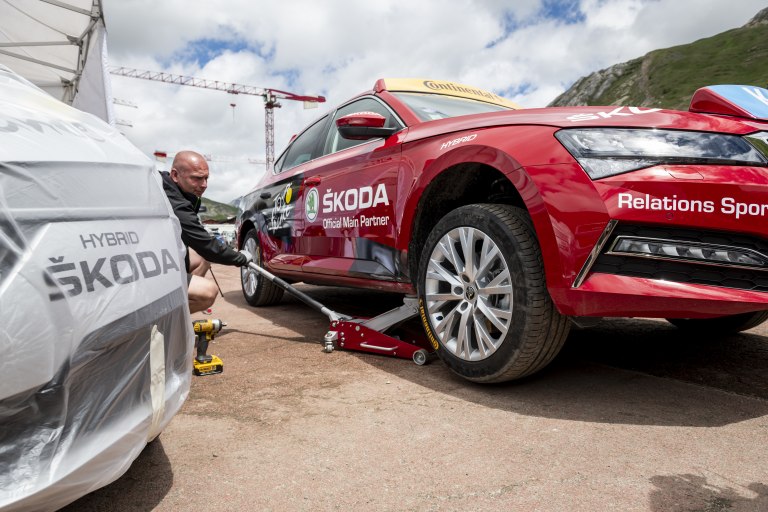 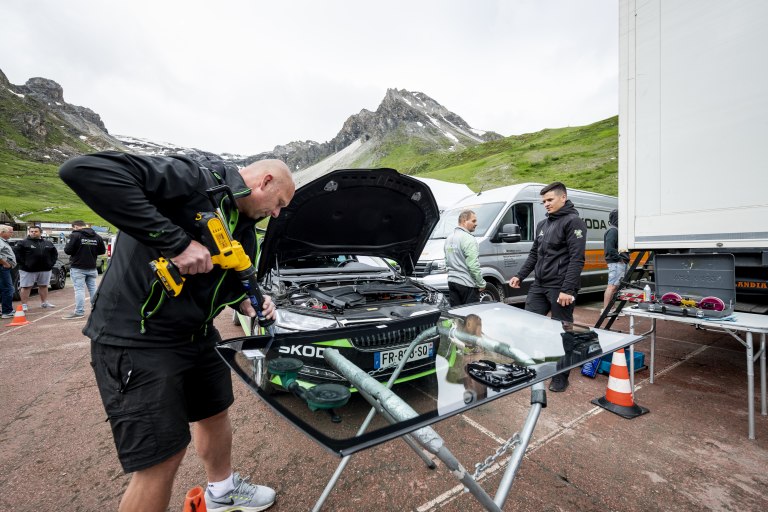 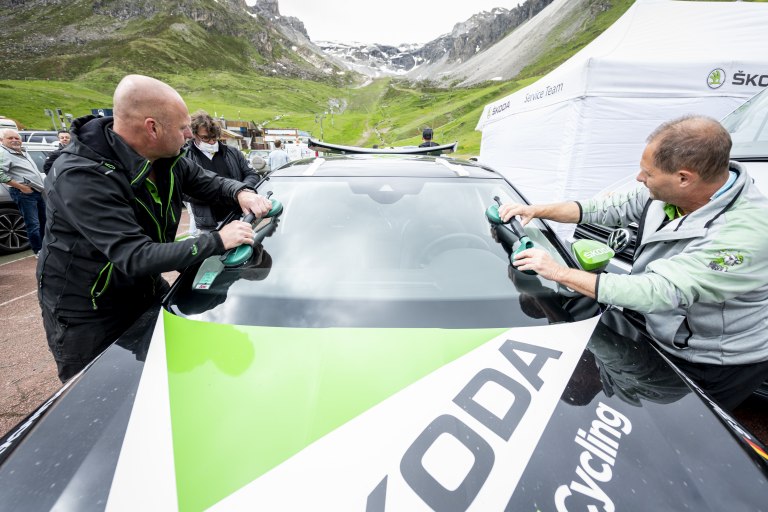