You all know what it’s like. Winter has set in. You’re in a hurry in the morning, but the car is covered in snow or ice. Morning frost is not just a drag, it can be pretty dangerous as well. What should you keep in mind?

Driving with an insufficiently clear windscreen and windows is a real risk. “Reduced visibility from your car increases the risk of collision significantly. Most at risk are pedestrians, because car lights can be seen even through frosted windows, but the silhouette of a pedestrian or cyclist without illumination is invisible through a crust of ice,” warns Robert Šťastný from ŠKODA Transport Safety Research.

He points out that drivers who only clear a narrow strip on their side of the windscreen risk not noticing pedestrians stepping onto a pedestrian crossing from the right, especially if they are coming through a line of parked cars. The police all over the world have logged tragic and often barely credible cases where drivers did not bother to clear frost or snow from their cars and caused very serious, even fatal accidents. Driving without clear windows is punished by fines in lots of countries. “You certainly shouldn’t be lax about it: five minutes of care for the car’s windows could save a human life,” says Robert Šťastný.

The quickest way to good visibility

What should you do when you find your car under a layer of ice but want to set off as soon as possible? Besides traditional aids like ice scrapers (which are neatly stored in the fuel tank cap or boot door in ŠKODA models), you can make use of the advantages of modern ŠKODA cars.

“If there’s a thick layer of ice on your windscreen in the morning, activate the MAX defrost function, which is specially designed to clear the windscreen quickly,” advises Jan Hrnčíř, who is responsible for air-conditioning development at ŠKODA. The system itself chooses the temperature and the quantity of air that will be directed at the windscreen. If your air-conditioning and heating are set to AUTO, the system’s ability to detect the surrounding temperature and other factors means it can automatically decide to de-fog the windscreen and prevent further fogging up. 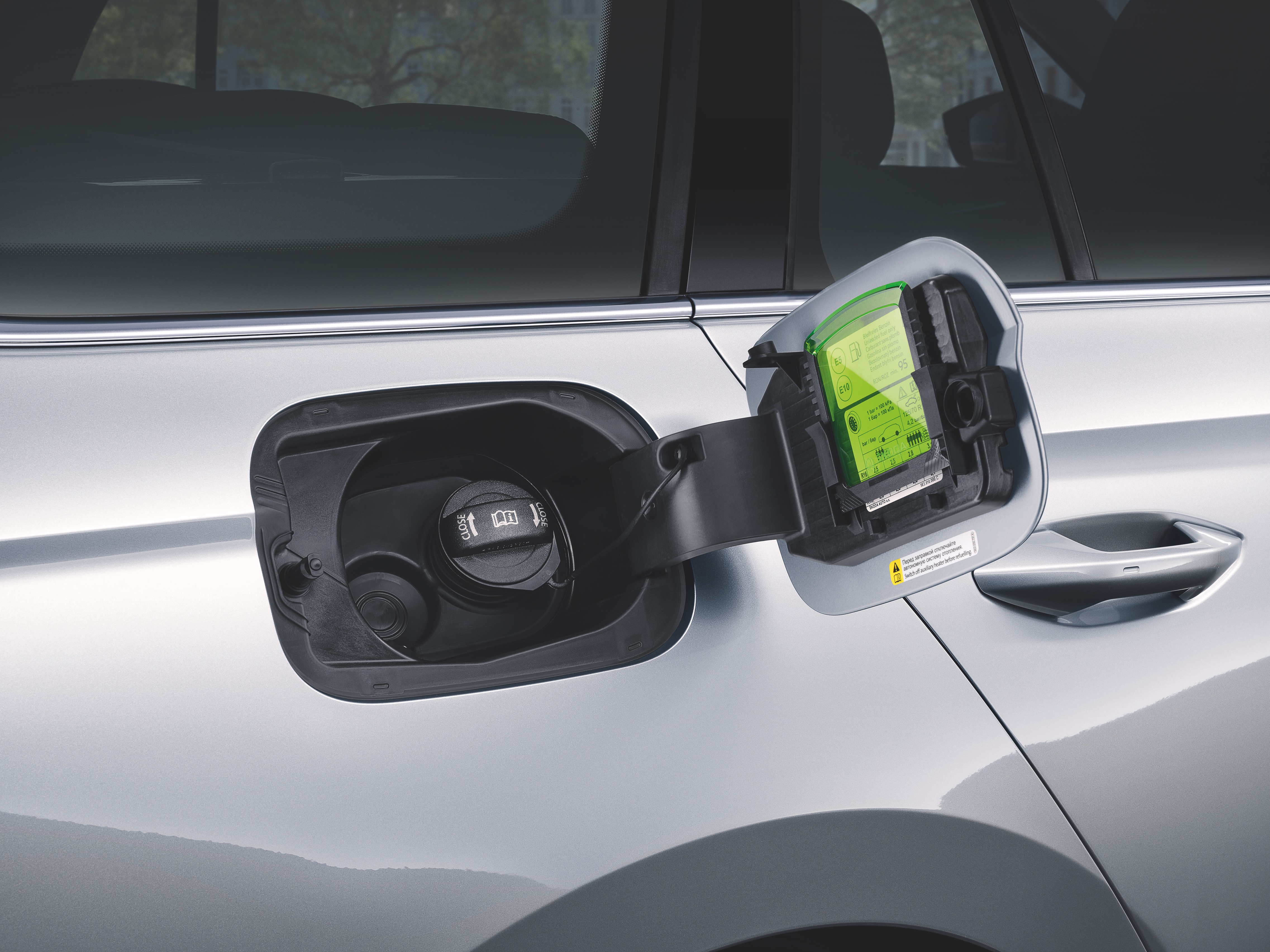 Owners of cars with heated glass surfaces, a feature that can be ordered in ŠKODA cars, are halfway home already. “Anyone who has the glass heating set to the automatic preset will have his glass surfaces de-iced within a few minutes, and without having to lift a finger,” explains Jan Hrnčíř, adding that if the automatic preset is switched off, it can be activated manually in the air-conditioning menu. According to Milan Sluka from the Assembly Parts and Aeroacoustic Simulations department at ŠKODA, windscreens in which visible heating wires have been replaced by a narrow, transparent metal layer are the latest trend. While they heat up in winter, in summer they also prevent the car interior from overheating because they reflect infrared sunlight.

Dangerous frosting – where does it come from?

How does frost occur and what is it? Frost is an atmospheric phenomenon comprising the formation of ice crystals on the surface of items, including cars and their windows. It is caused by tiny droplets of moisture in the air freezing when they come into contact with surfaces at a temperature below freezing point. At low temperatures glass surfaces can frost over, even during days or nights with no mist: all it takes is for moisture in the air to come into contact with the surfaces.

Heated up in advance and remotely

The greatest convenience in the form of autonomous heating and ventilation is available in the new generation of OCTAVIA, SUPERB AND ENYAQ iV models, which can heat and de-ice your car before you even get to it. These ŠKODA systems can be operated by remote control. Another hugely convenient option is being able to set times for switching the heating on and off via the infotainment system. 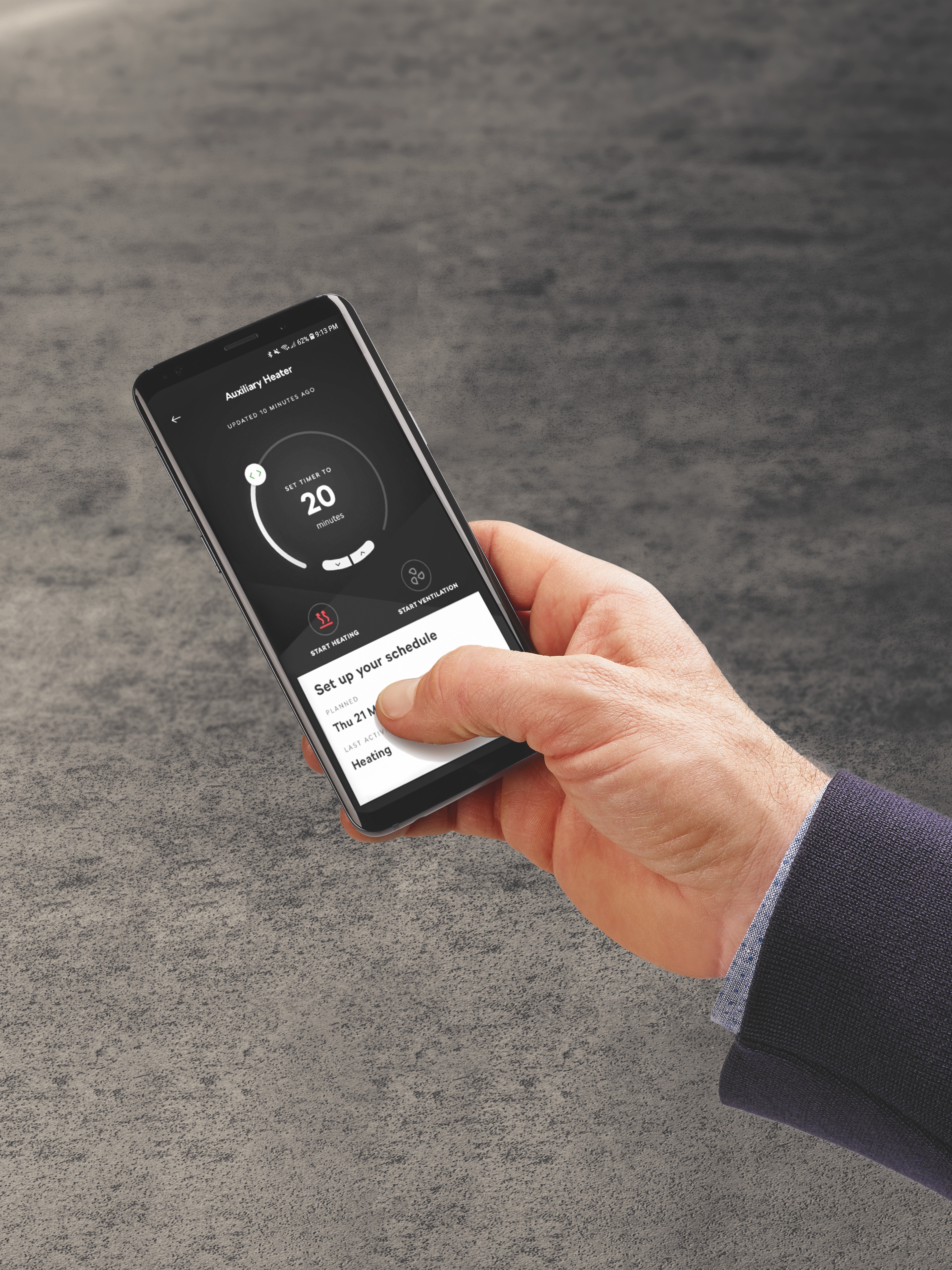 Then you don’t have to get the ice off your windows yourself, which saves you time and effort. The main advantage of modern autonomous heating systems is the fact that in the winter months they ensure that the car’s occupants can see out and are warm, but having a heated engine when starting the car also reduces engine wear, fuel consumption and emissions.

If the car is fitted with manual air-conditioning or you keep it in manual mode, you will de-ice the windscreen quickest if you set the temperature to the maximum value “HI”, the fan to maximum power and air distribution to the windscreen.

Ice on the windscreen is not the only winter hazard that drivers can pay for. And pay for in the literal sense. A car covered with a layer of powdery or frozen snow is not just a hazard for the driver and other occupants of your car: it also endangers cars behind you. In most countries, drivers are required by law to clear snow off their car before hitting the road, with the failure to do so punishable by fines (EUR 80 in Germany, EUR 60 in Slovakia and CZK 2,500 in the Czech Republic, for example) or even loss of driving licence. 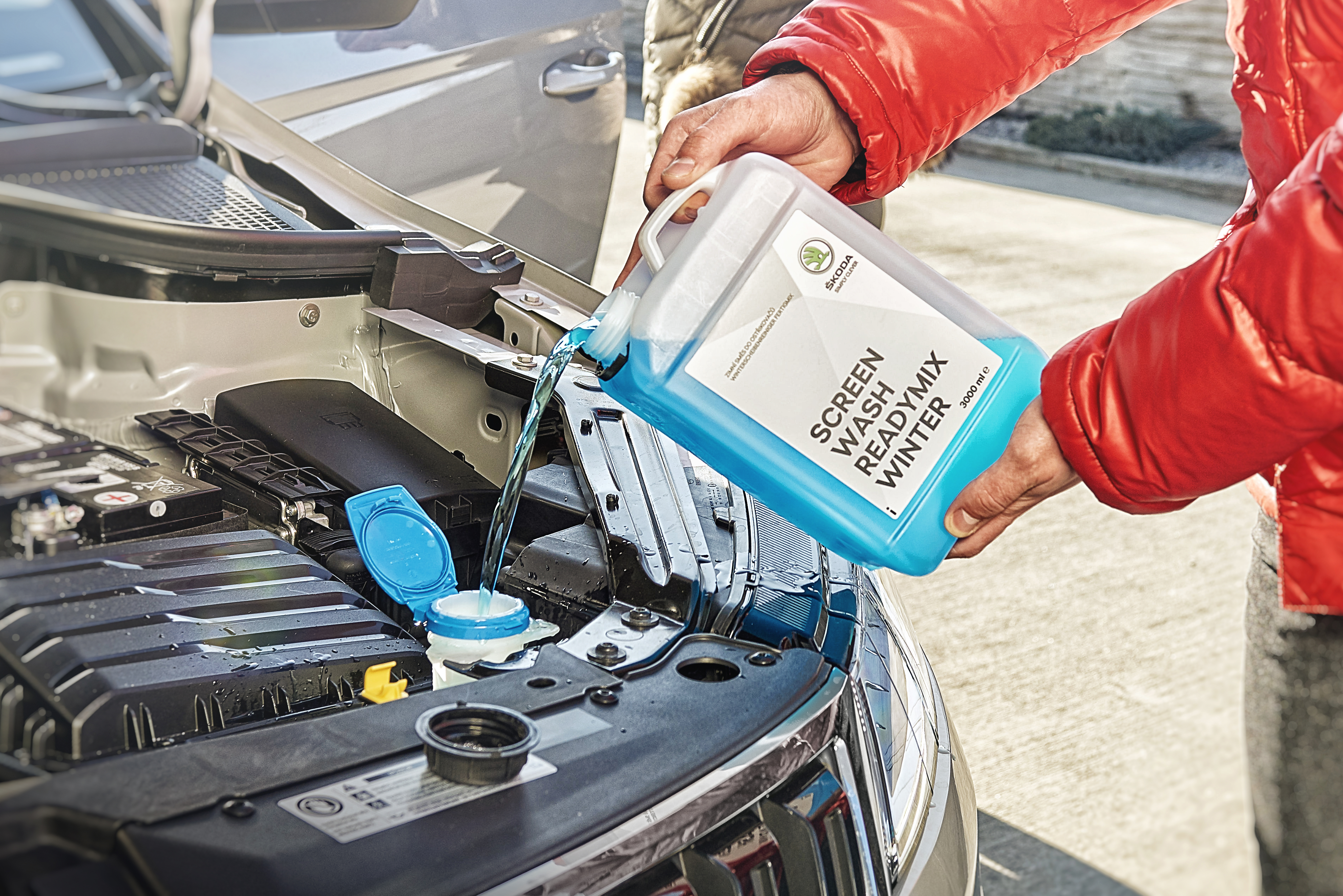 What’s more, snow on a car compromises its aerodynamics and increases fuel consumption. If you’re behind a snow-covered car, it’s not a bad idea to keep your distance. Other people’s inconsiderateness can end up costing you money, because car damage caused by an icy crust becoming detached from another car moving at high speed is not all that unusual. Especially from lorries. And one more recommendation – you should also brush the snow off your registration plates. Snow sticks to them very easily, including while driving, and having an unreadable registration number can also result in hefty fines.

HOW NEW ŠKODA CARS ARE TESTED AGAINST FROSTING

Before a new ŠKODA model hits the market, all its properties and functions are put through a wide variety of stress tests. That also applies to the car’s ability to deal with ice and frost.

One of the tests finds out how quickly the windscreen de-ices. The car is left to “freeze” at a temperature of -20°C in a climate simulation chamber. A specified quantity of water is sprayed onto the windscreen and transforms into a solid layer of ice. This simulates a freezing morning in extreme conditions. The car heating system’s ability to heat up the interior with the engine idling is then tested, with the goal being 80% of the windscreen cleared within 40 minutes at twenty below zero. These parameters are not chosen randomly: it’s what the regulations require. 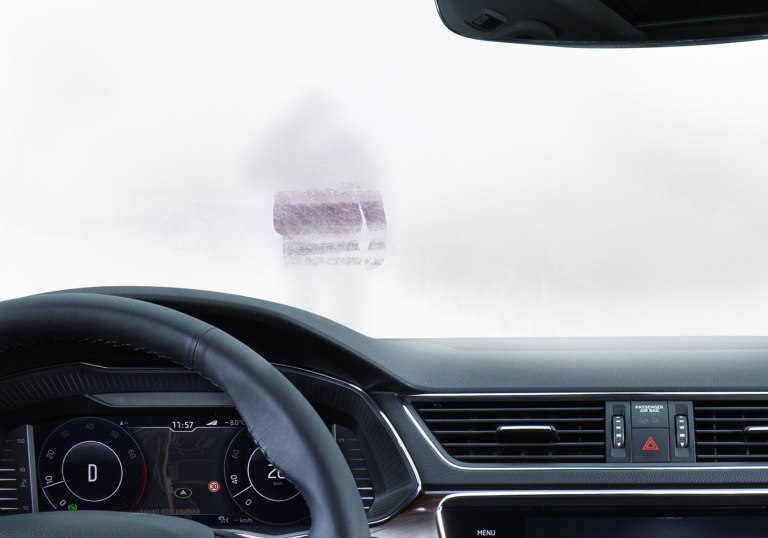 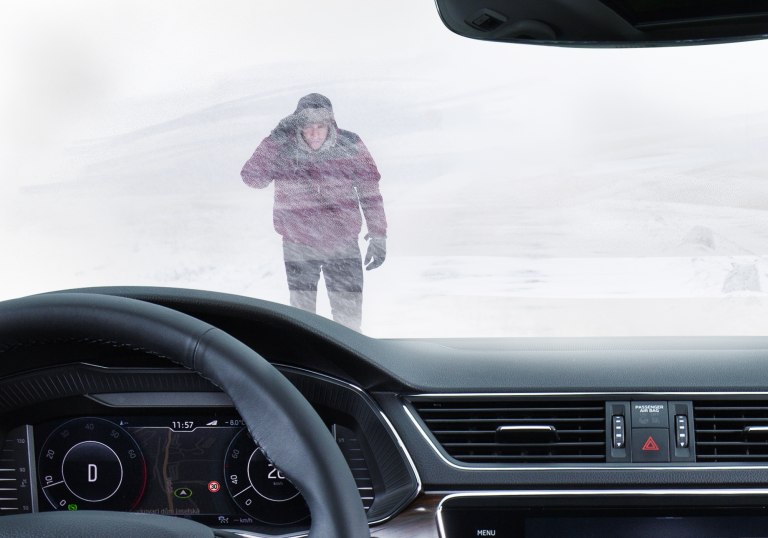 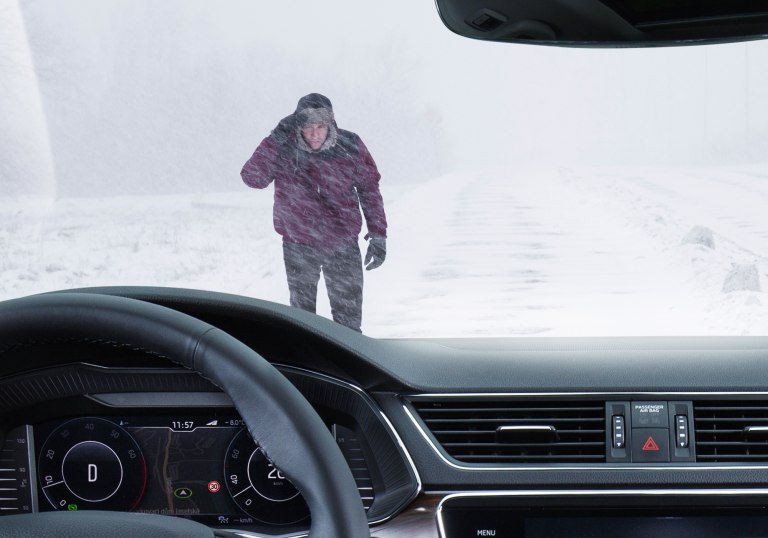 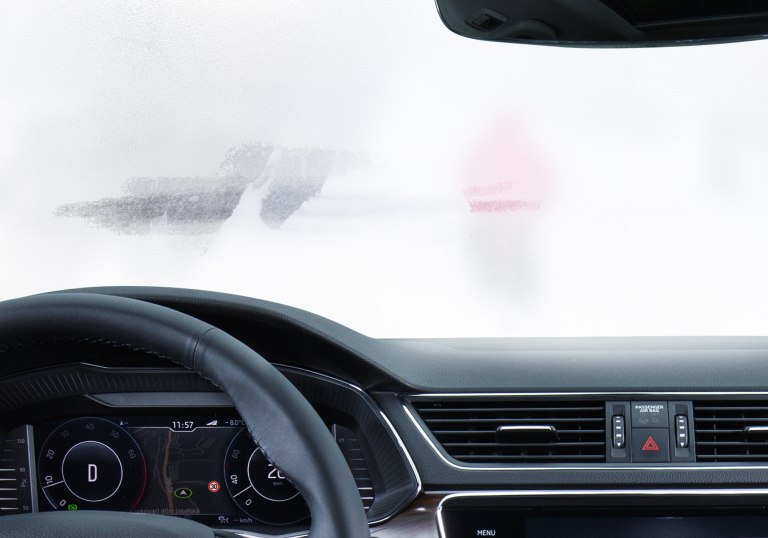 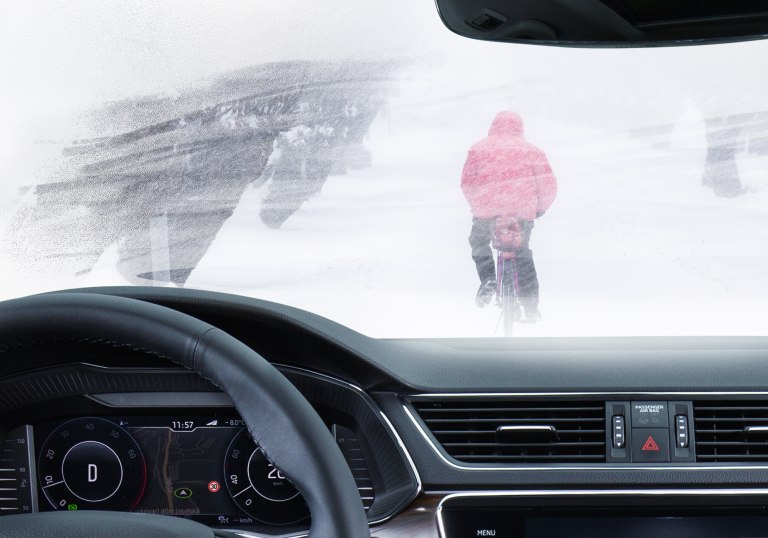 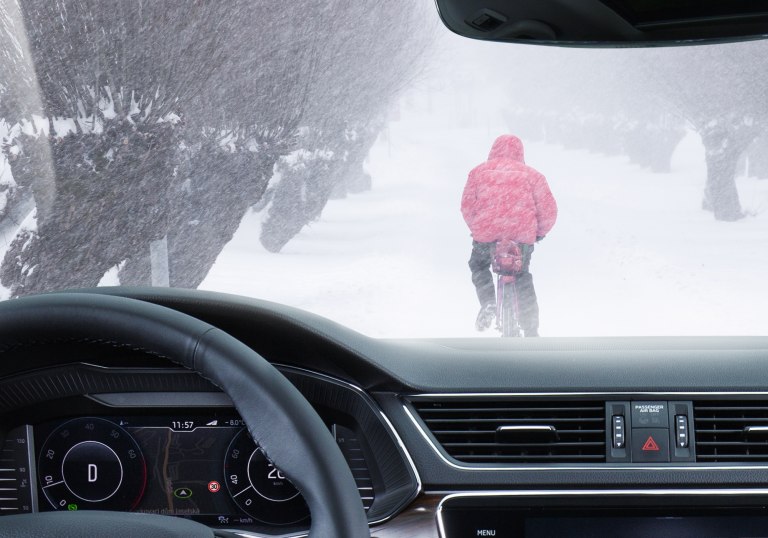 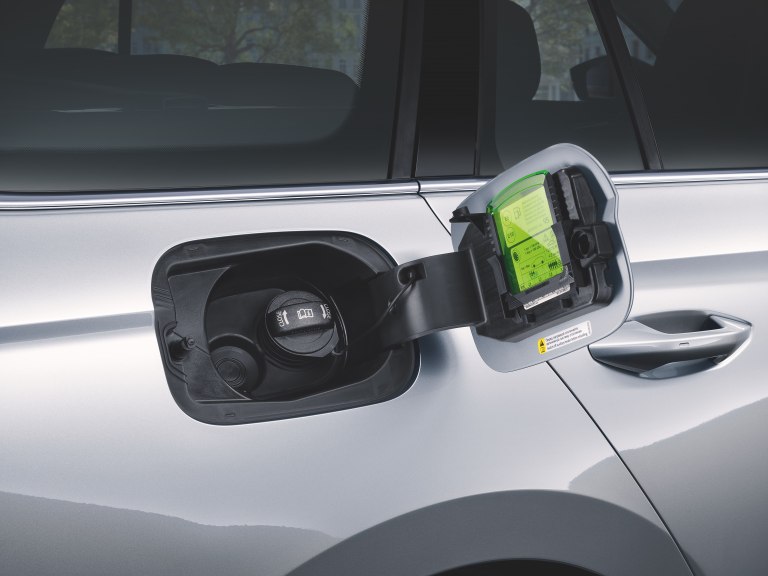 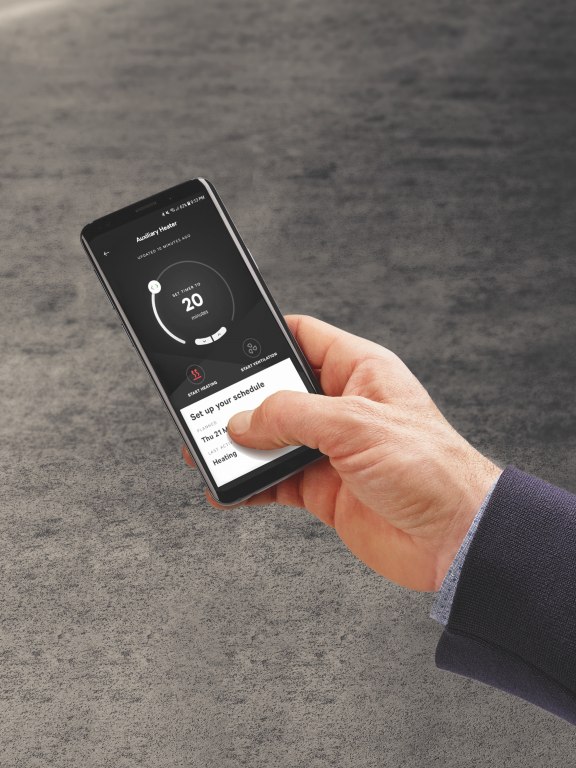 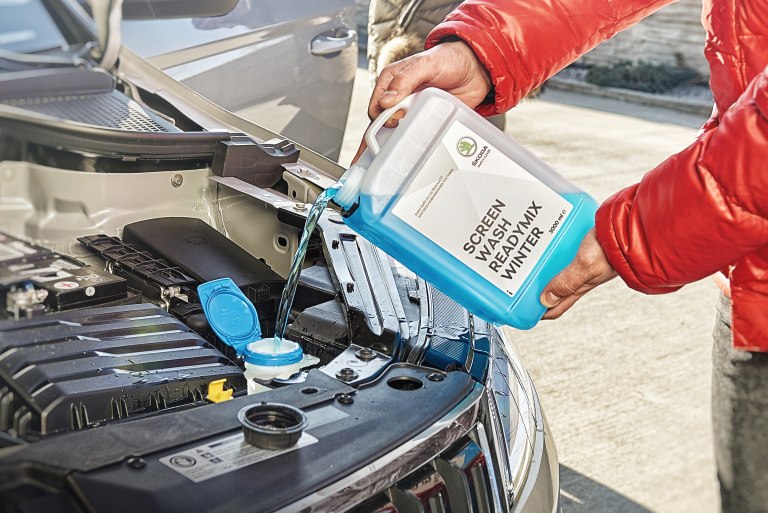 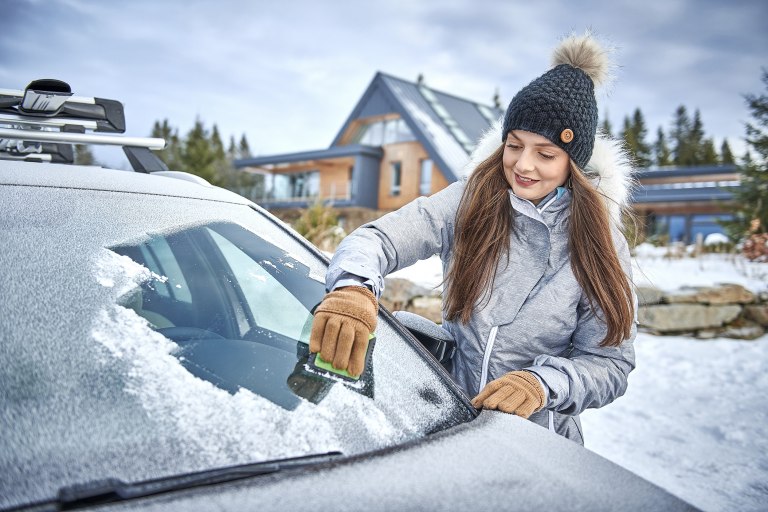